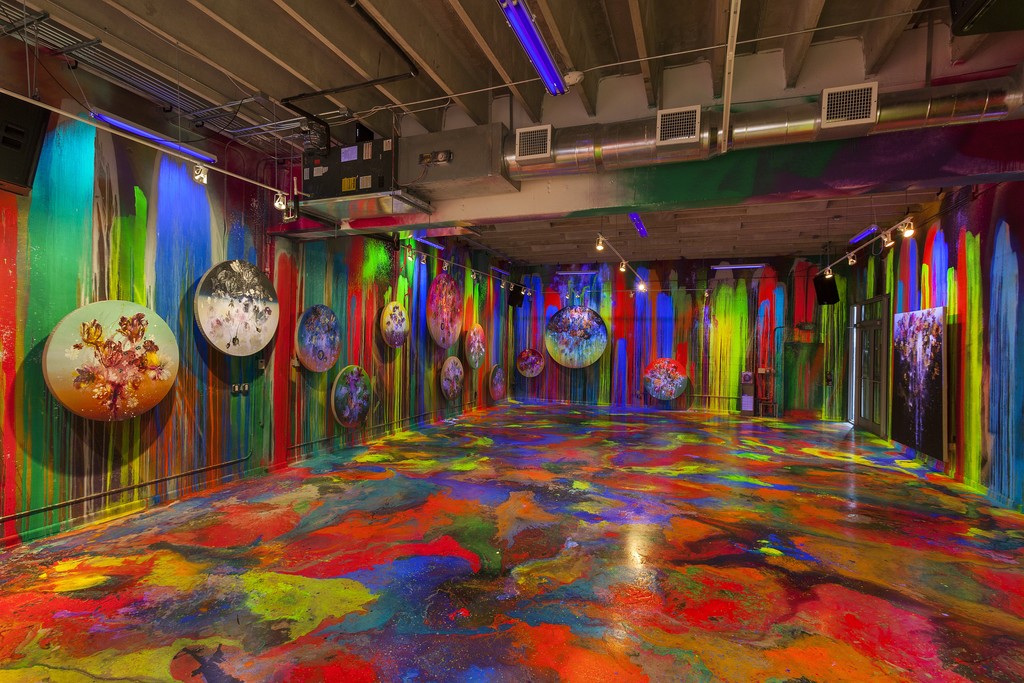 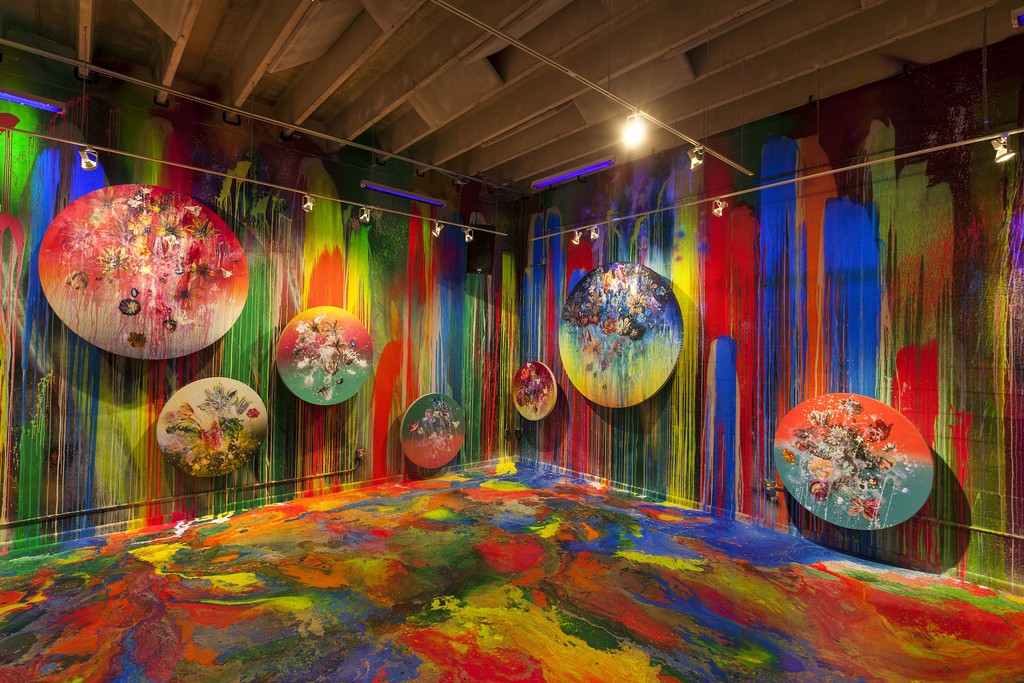 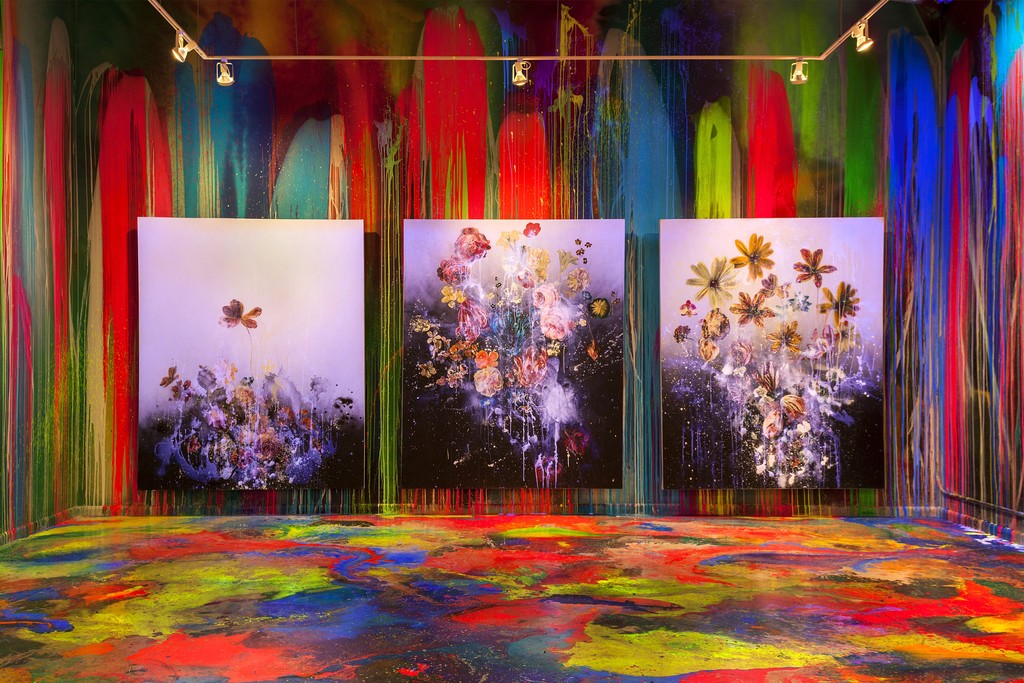 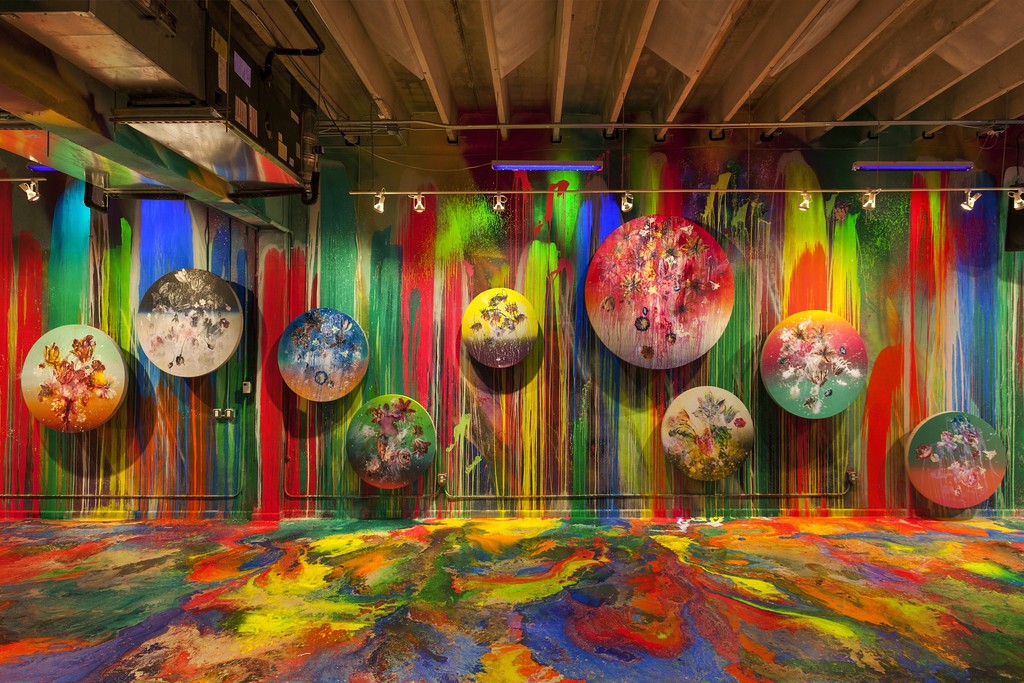 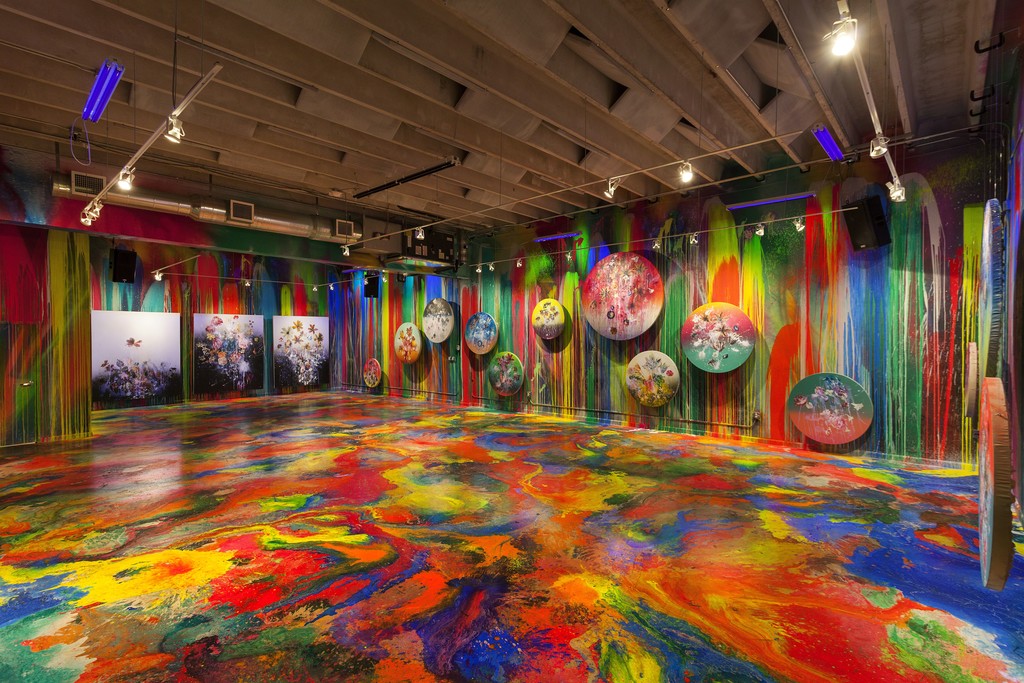 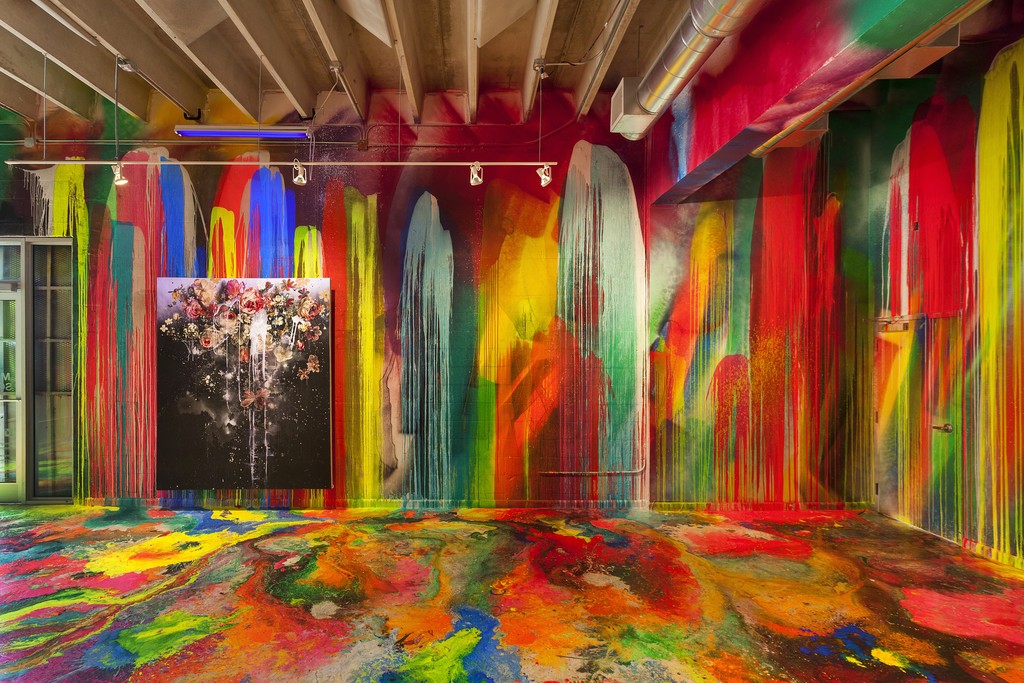 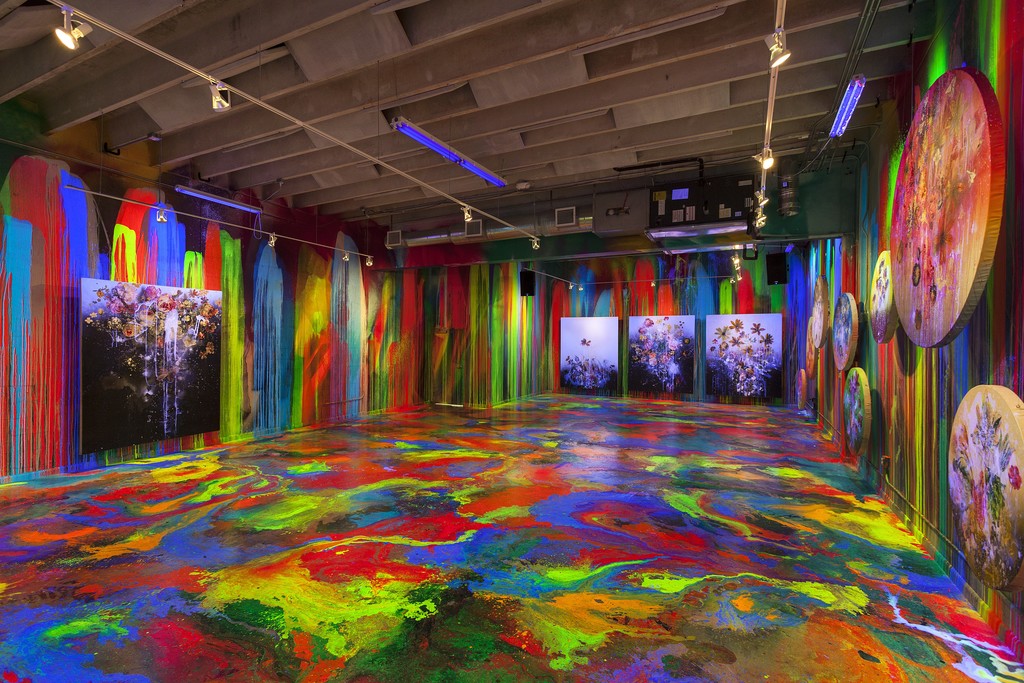 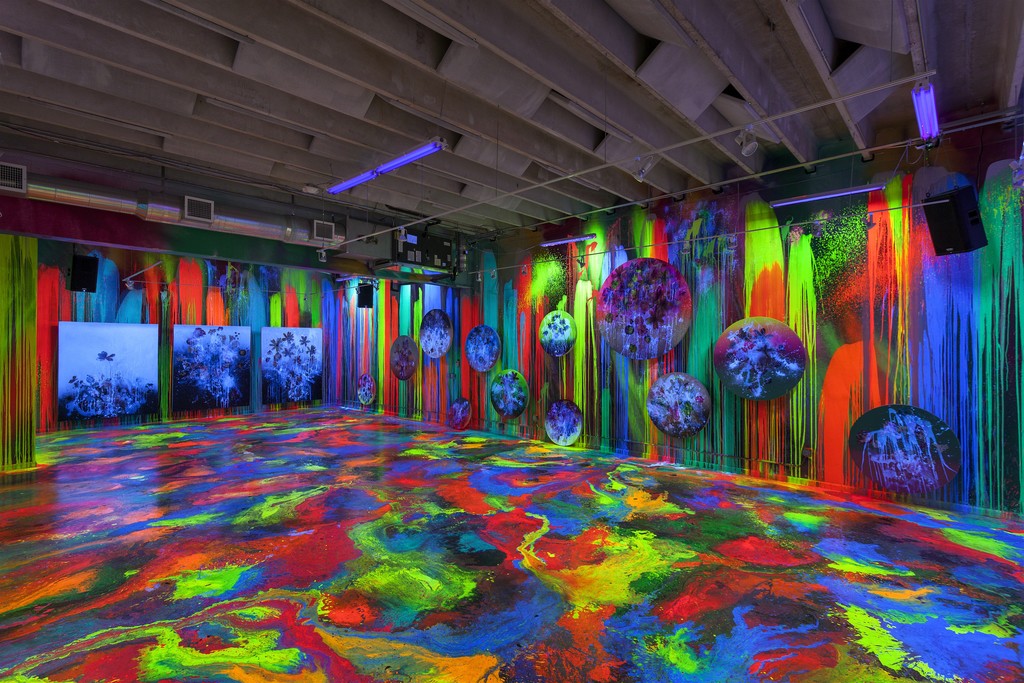 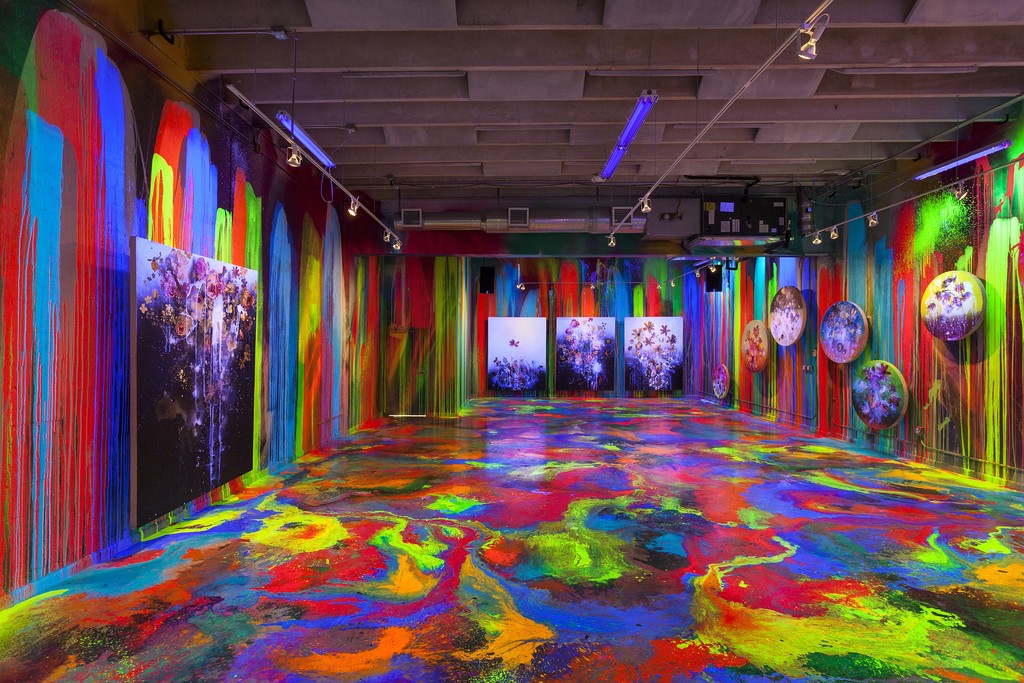 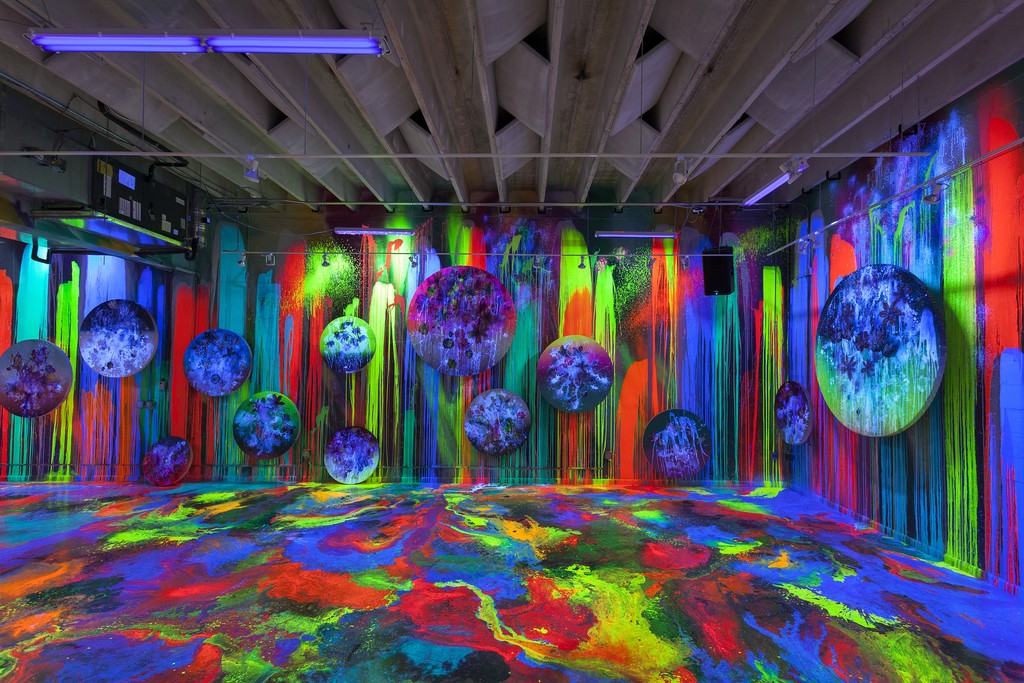 Miami (November 18, 2015) –PRIMARY is pleased to announce Calm Before the Sun, the latest solo exhibition of Magnus Sodamin on view at Wynwood Walls in partnership with Goldman Properties. The exhibition opens with a private preview Friday, November 27, 2015 from 7 – 9 pm ([email protected]) and a public reception December 1, 2015 from 11 pm – 2 am. The exhibition will be on view through Art Basel Miami Beach until January 31, 2016. For this immersive installation, Sodamin has painted the floor and walls of the gallery in its entirety with his trademark kaleidoscopic washes of dayglo paint. Complementing this bright background, a series of contemplative paintings attest to his long-term engagement with abstraction and the natural environment of South Florida. Illuminating the work is an innovative lighting system, in which lights on timers continually shift to reveal unexpected vistas.

The exhibition’s title Calm Before the Sun refers to the tranquility before a sunrise seen from the water, be it in Biscayne Bay or in Ten Thousand Islands, or farther afield. The artist is a long-term outdoorsman; these works find him translating the moment of stilled anticipation as the sun creeps above the black waters, dramatically recoloring the sky with each passing moment. The serene gradated backgrounds of the hung paintings speak both to the quiet surface of the water and to the dawn sun itself, though their floral subject matter roots the viewer in the immediate landscape. While the intense color and play of light attest Sodamin’s paintings to his tropical surroundings, the work also references his time spent at the Nansen Academy in Lillehammer, Norway. The school is located on the edge of the pristine Lake Mjøsa, which has long been a destination for Norwegian painters. Specifically, the impressionists Frits Thaulow and Erik Werenskiold would travel to paint the effects of northern light on water en plein air.

Calm Before the Sun directs Sodamin’s attention towards the passage of time, and how environment affects mood, engaging not only the landscape, but visual perceptions and painting itself. How is one supposed to translate nature to canvas, Sodamin asks, especially when it is changing all the time? And, on the other end, how is one supposed to see it, be they outdoors or in a gallery?

Magnus Sodamin (@magnificentmagnus) was born in Manhattan, New York in 1987. He spent one year training at the Nansenskolen (Nansen Academy) in Lillehammer, Norway and received his BFA from the New World School of the Arts, Miami in 2012. Sodamin’s work has been featured at group exhibitions staged in Lillehammer and throughout Miami including the 2012 BFA Exhibition held at the Cisneros-Fontanals art foundation (CIFO), the 2010 Lotus House Women’s Shelter Fundraiser at the Margulies Collection, and two consecutive group exhibitions at Primary Projects in 2012. Sodamin lives and works in Miami, where he is represented by Primary Projects.

PRIMARY (@primaryprojects) is a multifaceted organization that explores and promotes multiple forms of aesthetic expression from both established and emerging artists. Operating both within a gallery context and in the expanded public realm, PRIMARY is an intelligent, alternative arts environment with a bold urban sensibility delivered through a diverse range of media.