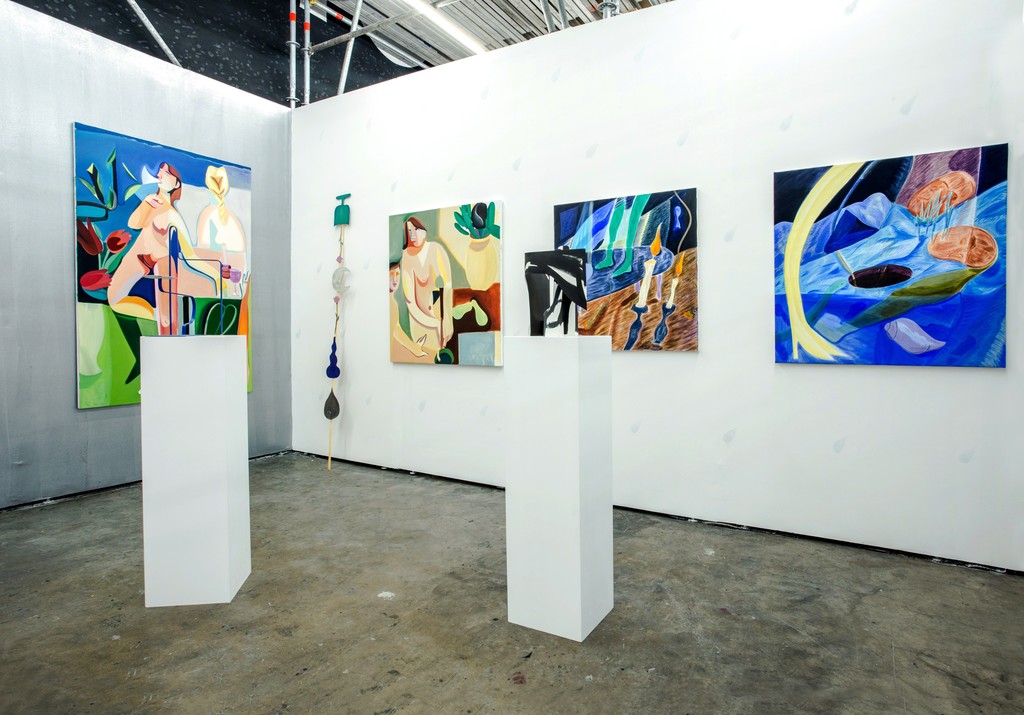 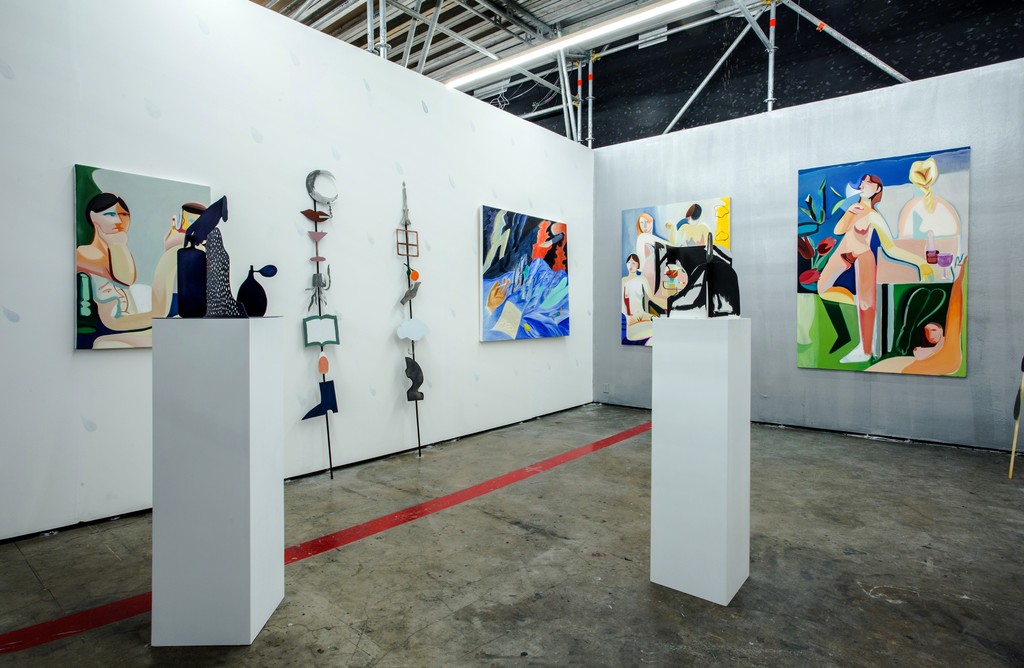 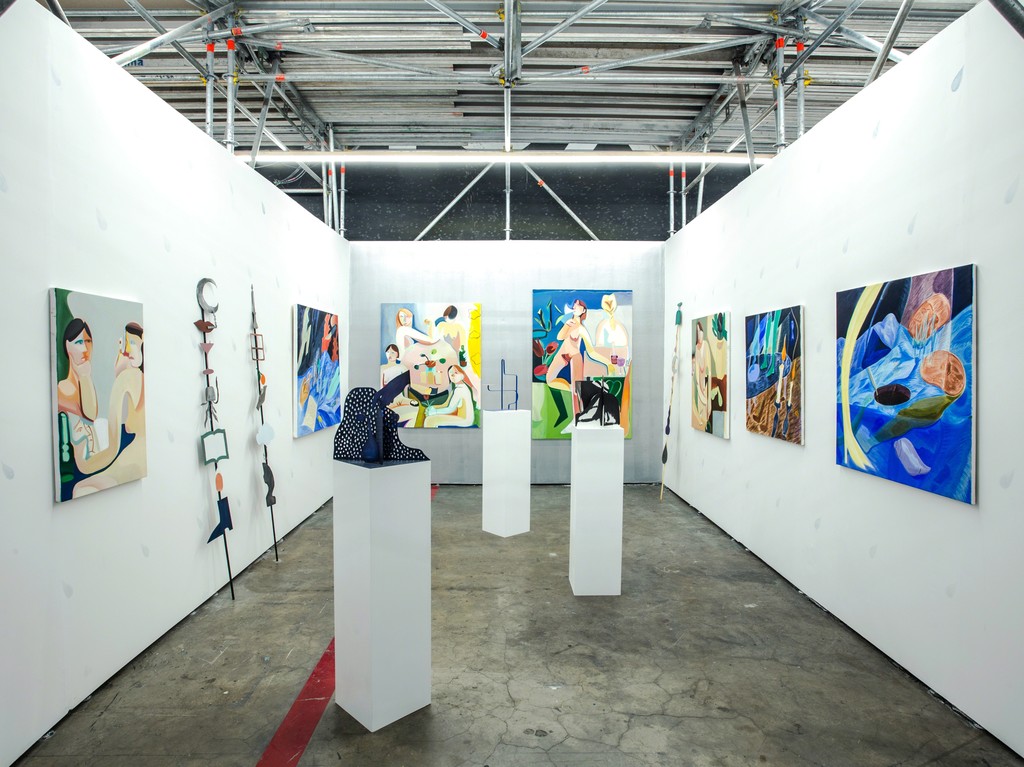 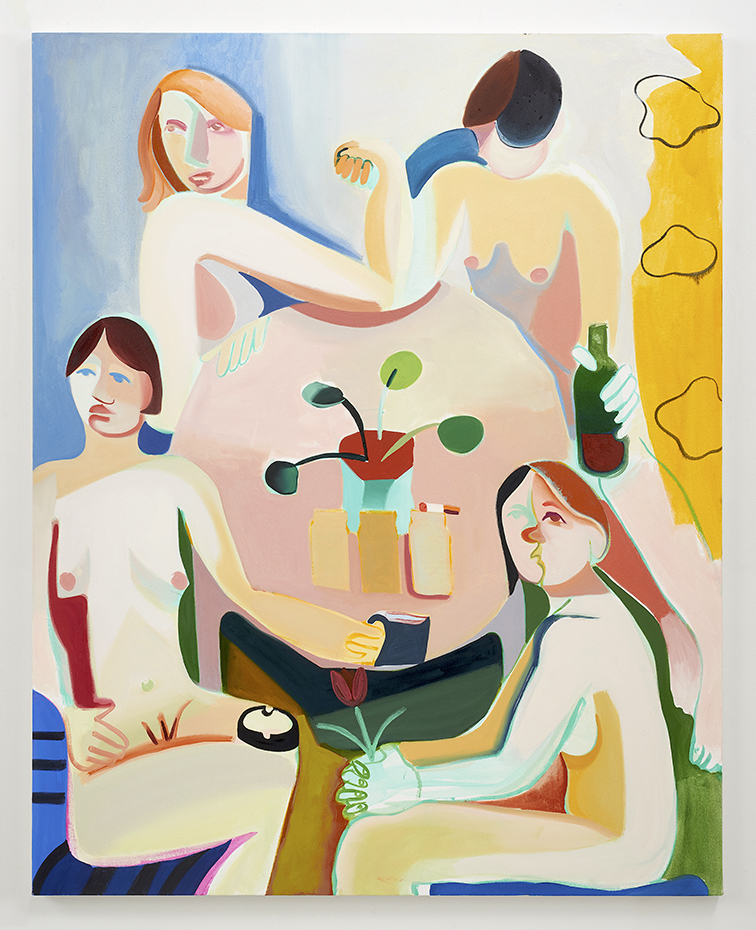 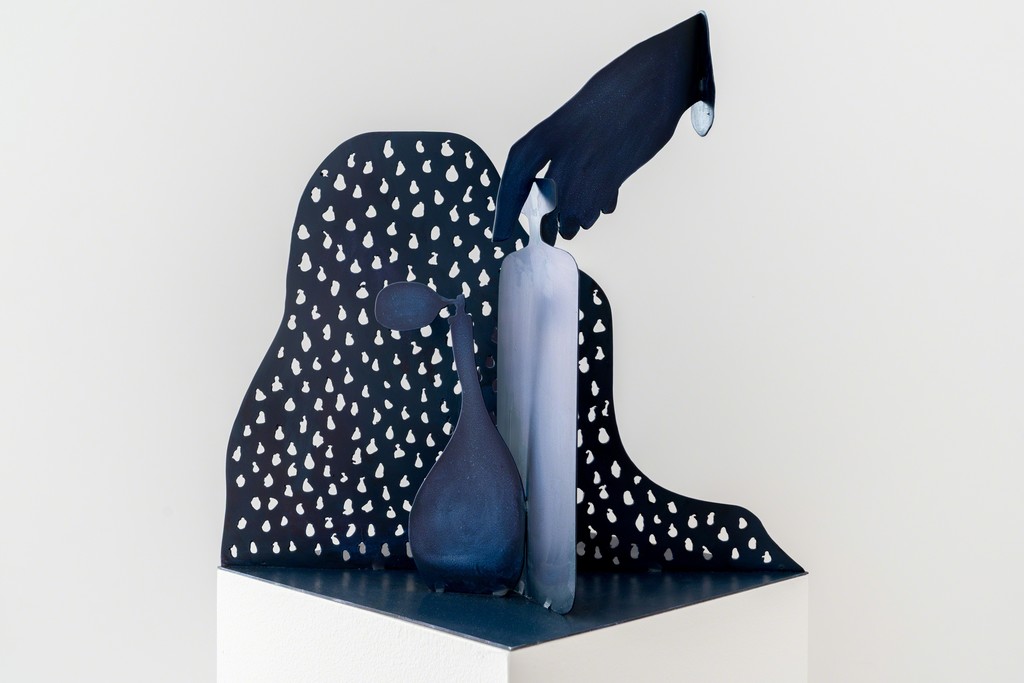 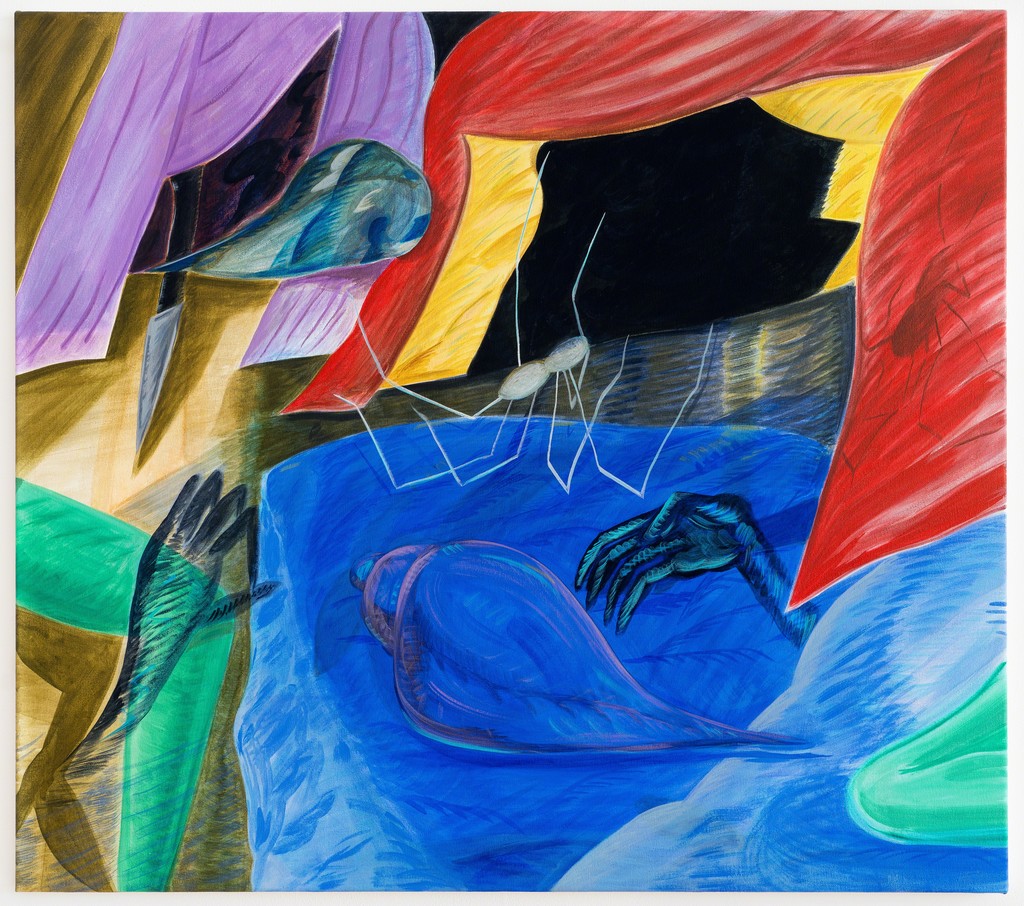 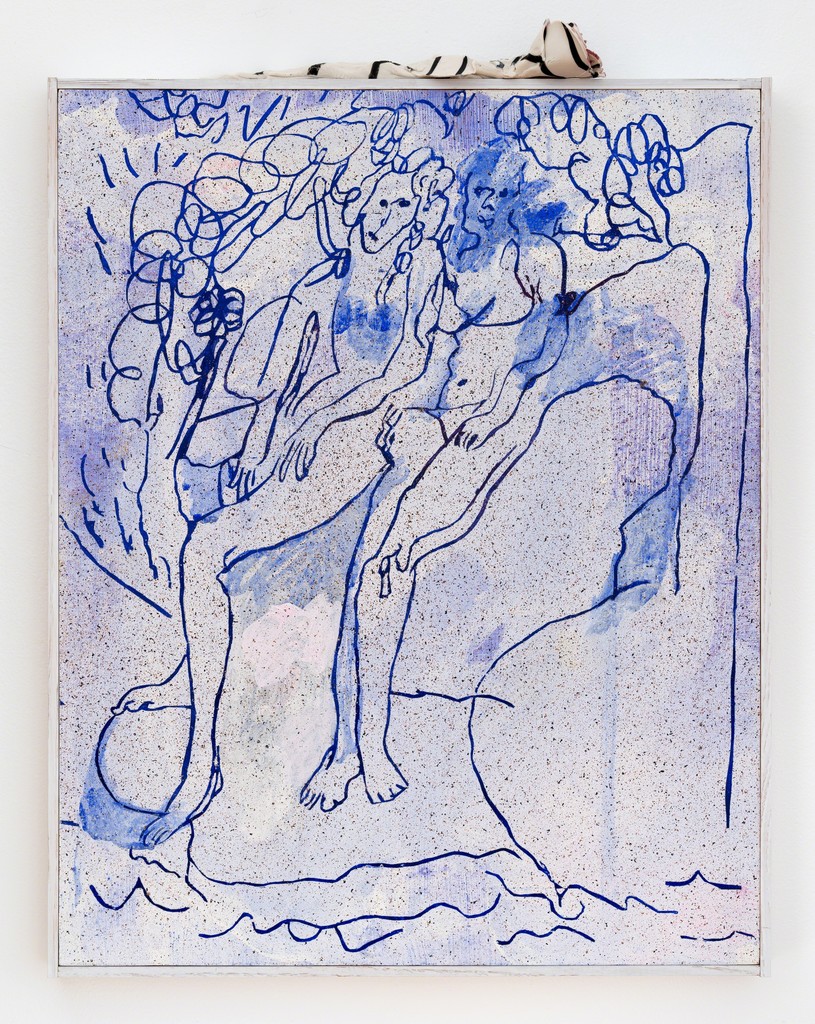 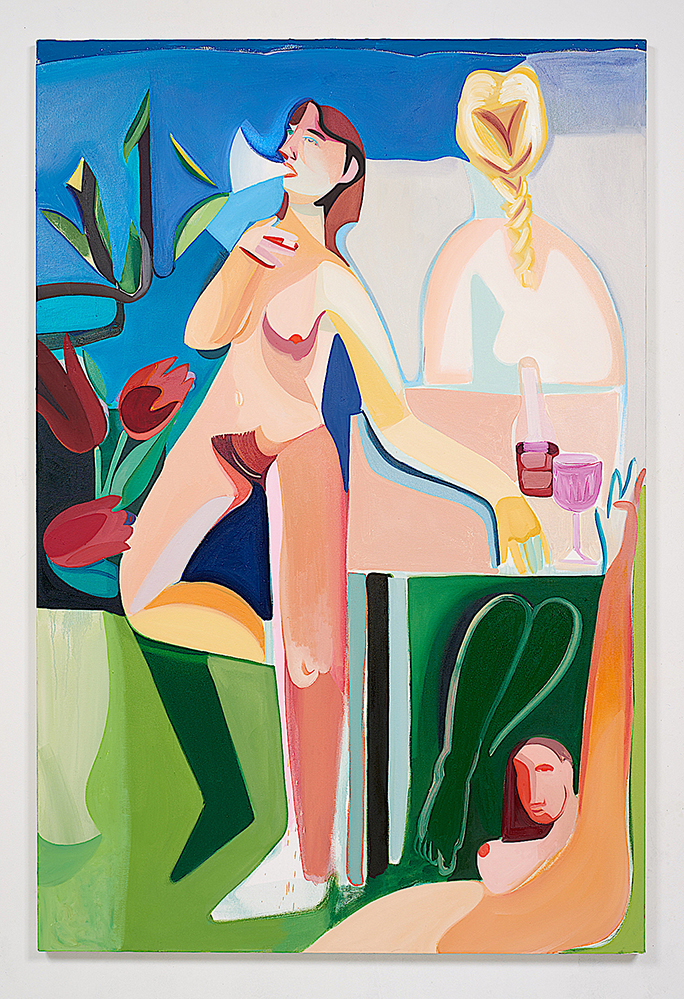 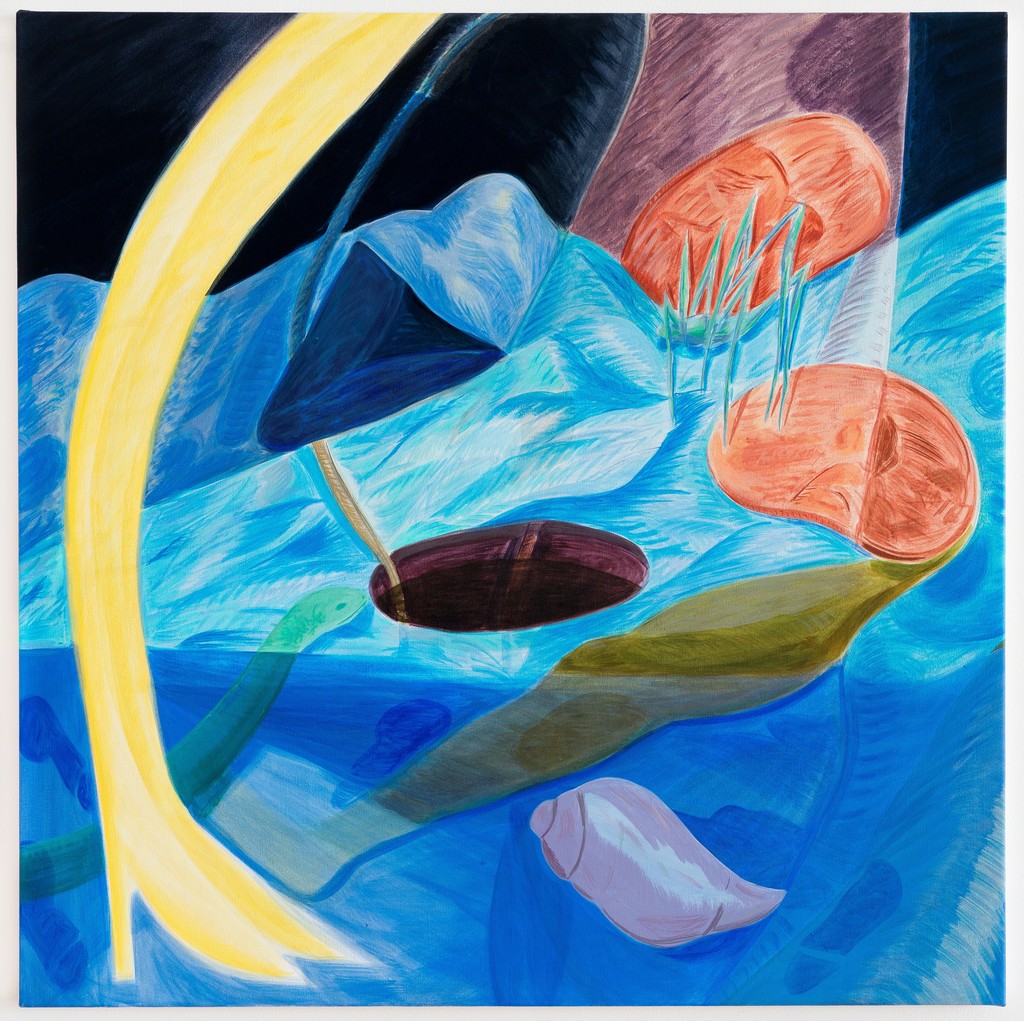 Projet Pangée proposes the exhibition 'The Perfume Bottle, The Hand And The Pear' at Material Art Fair 2018. This exhibition brings together four artists who manifest different versions of a disembodied dream narrative. Evolving from the surreal and the intimate, their works pry at the abstraction of the everyday through phantasmagoric mythologies of lived experience. Orchard, Rathod and Blain through painting, and Brown through sculpture, create pieces that delve between the material worlds, drawing on the physical nature of gesture to elucidate the intimacy of creation.

Orchard’s paintings are about relationships between women, relationship to Modernism, and the anxiety and humor found in both physical and emotional intimacy. She paints women exclusively, blending her memories and embodied experiences with those borrowed from art history. She is inspired by Western painting, looking most often to Analytic Cubism, the Chicago Imagists, the Bay Area painters – any moment when the female figure has been used to indicate a hidden psychological position. The women in her work are shown in accidentally compromised situations. Their poses are suggestive of languor and the anxiety of inaction. Orchard sees these brief moments of vulnerability as opportunities for finding humor and empathy. She brings together disparate painting languages and art historical influences to create a world that is composited and unified, populated by a recurring cast of characters that are proxies of herself. The aspect of humanity she approaches in her work is resistant to classification, at once tender and funny, violent and calm, graceful and clumsy.

Brown’s sculptures move between the familiar and the abstract, finding liminal space in the everyday. Using metal, she works with multiple flat steel pieces that begin on a singular plane and move to a third dimension as they are assembled. She recreates objects and forms that frequent her subconscious to set the stage for dramatic narratives of things that have just occurred. In her own words, she contradicts the machinery (both literal and figurative) of metalwork, finding herself “oppositely drawn” to ways in which she can think through her hands. The resulting pieces become amorphous; perspectives that shift significantly as we move between them, each object a fragment of an unknown history.

Rathod’s paintings result from the surrealist process of automatic drawing, which allows her to link directly to her unconscious through memory and self-examination. Coarse, uneven, stylized brushstrokes pull us into a dream narrative, carving distance from realism. Her particular combination of animate subject (even where the inanimate is concerned), brushstroke and color palette refers us, as the viewer, elsewhere: somewhere which is, as of yet, undefined, and which, more definitely, does not exist solely in the plane of the conscious. Such intentional disconnect roots in Rathod’s interest in diasporic identities, something she tackles through a use of elliptic imagery and animism of space when language is rendered ineffectual.

Blain’s paintings focus on the vernacular, mundane world of human relationships, using a tongue-in-cheek childlike approach with a direct and pared down drawing style, rendered in paint. Her work uses humor as a mechanism to speak about sentimentality, heartbreak and romance. Inspired by the quotidian, Blain gathers source material in such a way that echoes her hyperactive tendency to record her surroundings visually. Many of the formal considerations in Blain’s recent paintings are drawn from traditional textiles and craft, or photographs that she collects daily on her cellphone. Frequently employing devices such as repetition of form and texture, color and composition, her paintings strive for sense of rhythm.

In the context of this exhibition, the booth is considered as a poetic space evolving between the surreal and the intimate, transforming itself in a living installation composed of several artworks seen and presented as objects.