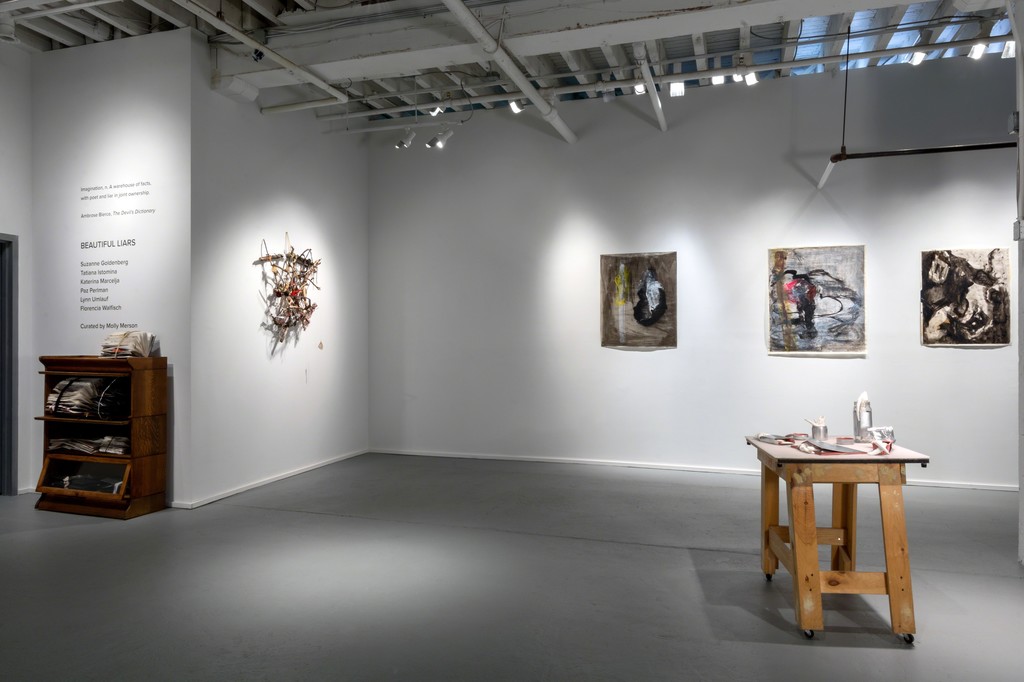 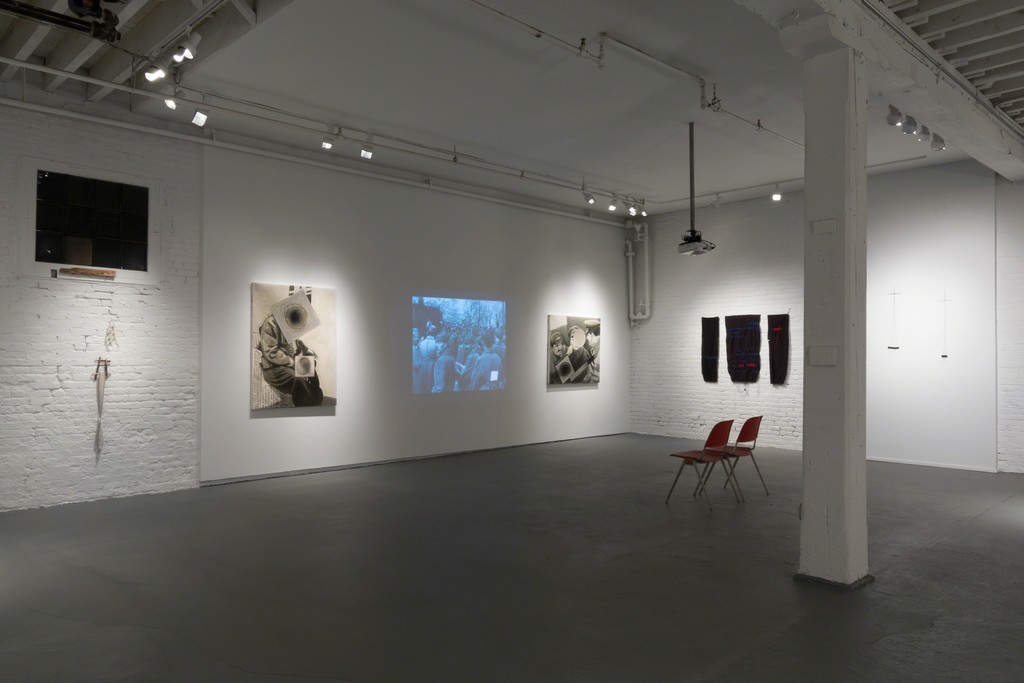 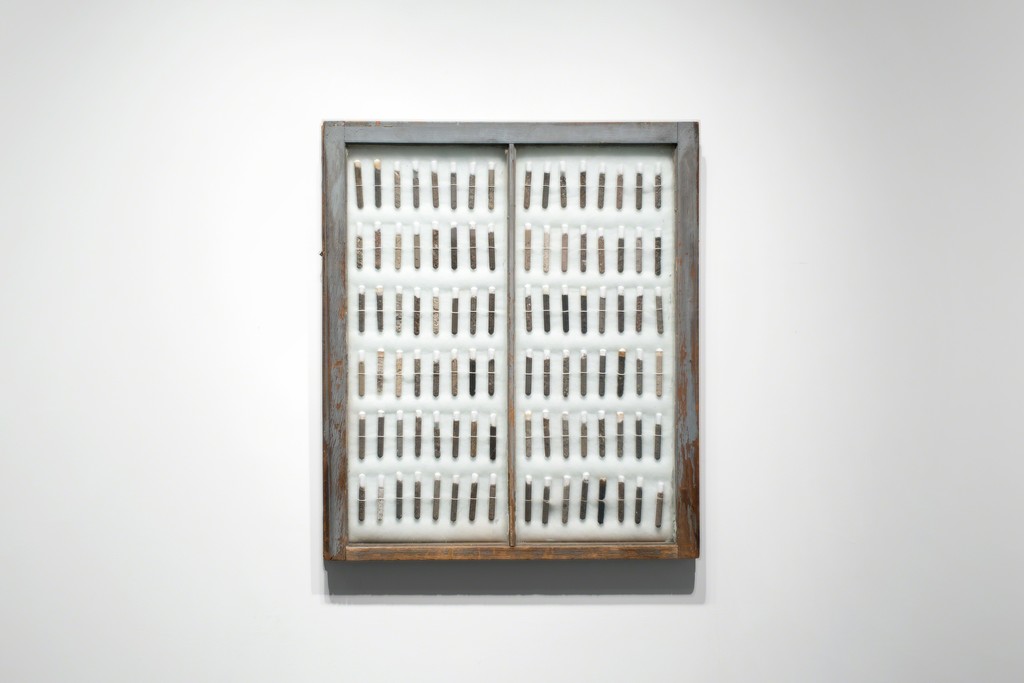 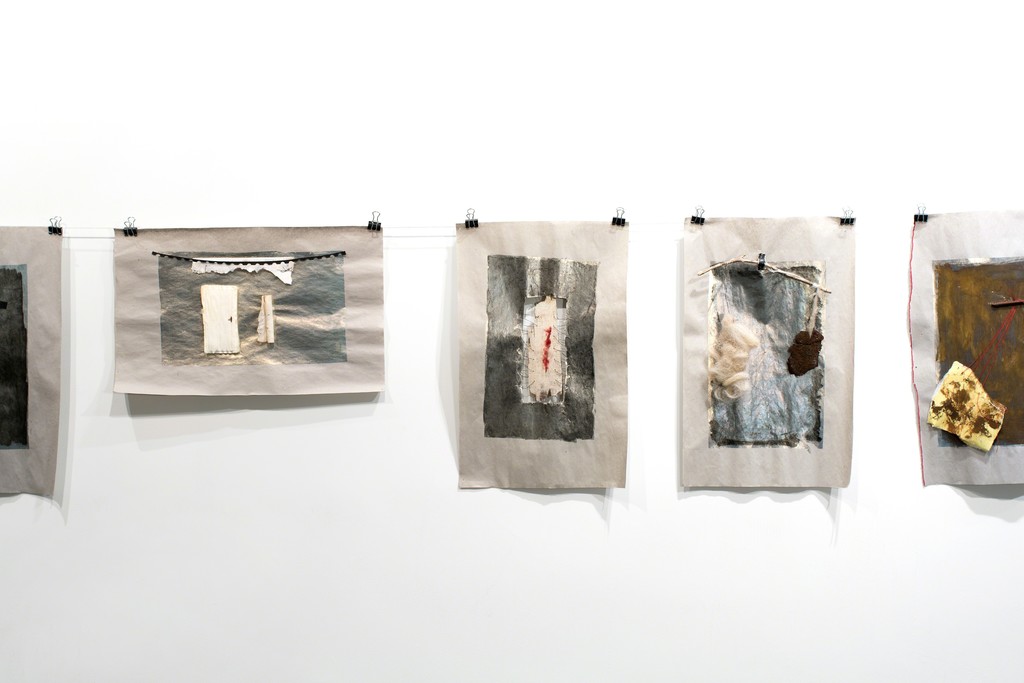 A detail of the "Homage" works on paper by Paz Perlman in BEAUTIFUL LIARS. 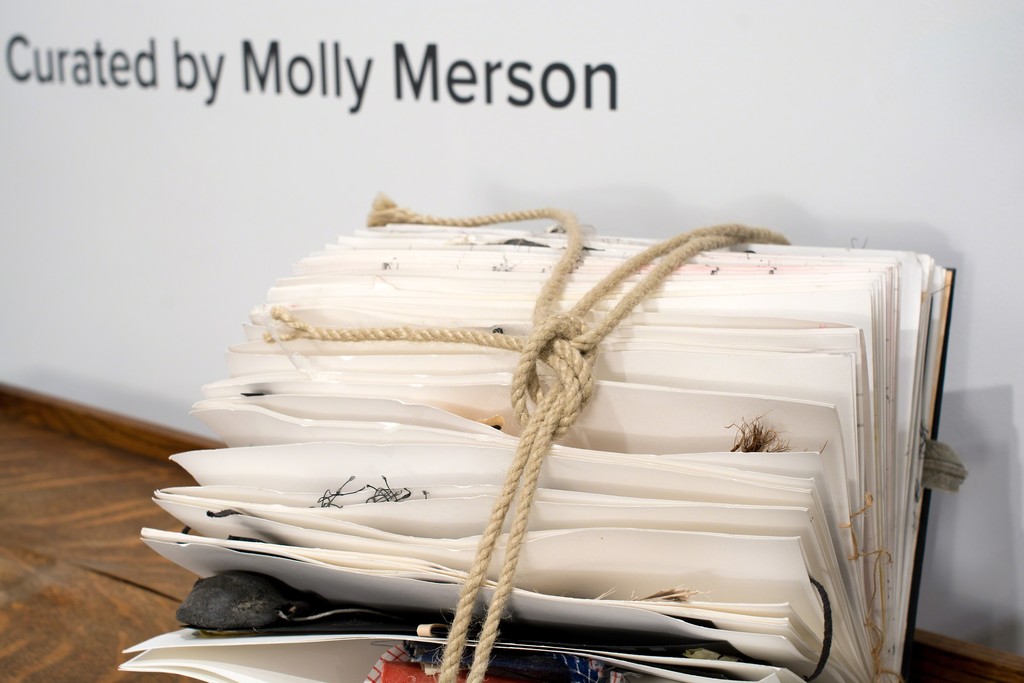 A detail of work by Paz Perlman at PROTO Gallery 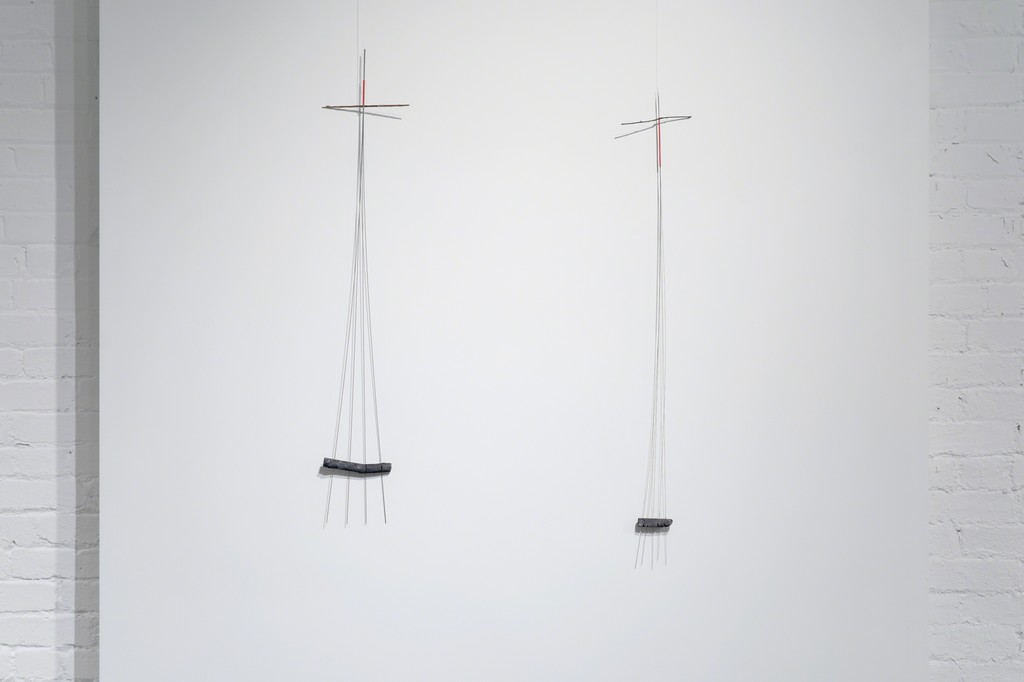 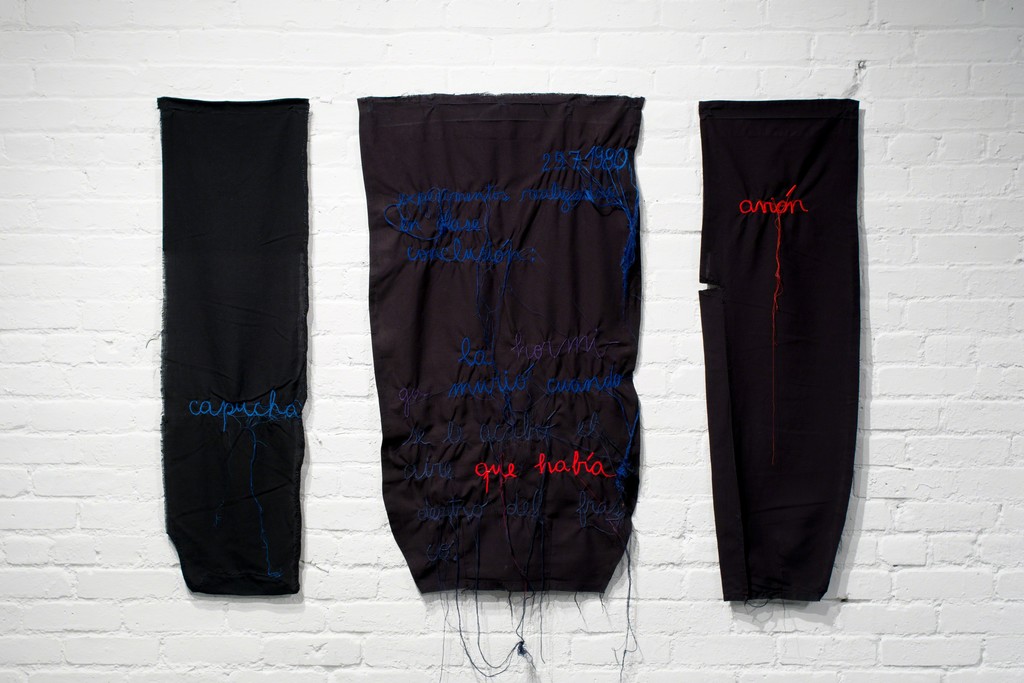 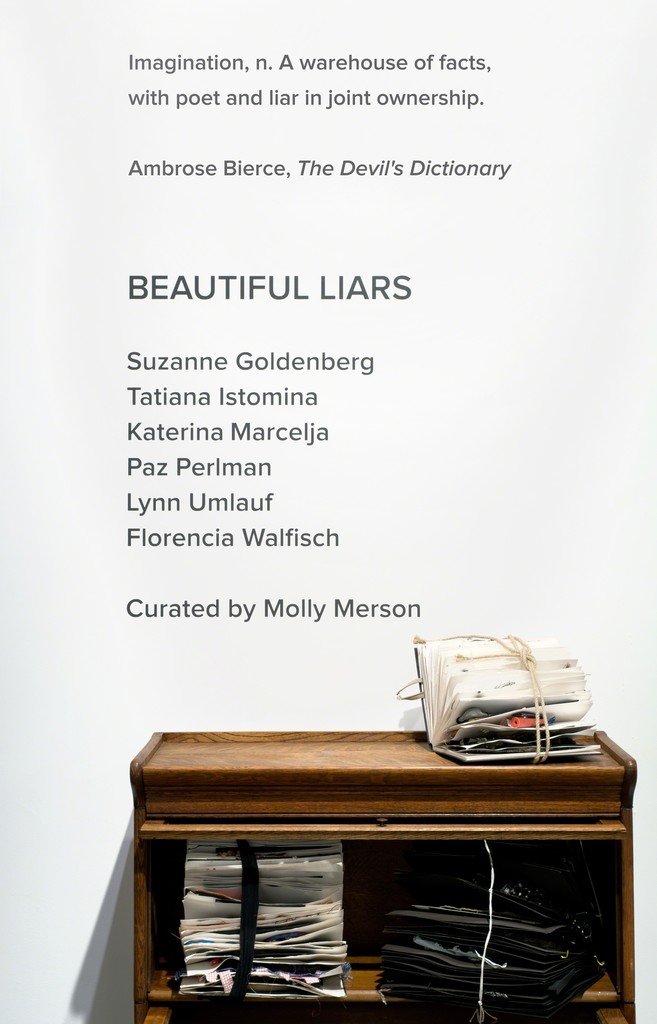 Imagination, n. A warehouse of facts, with poet and liar in joint ownership. Ambrose Bierce, The Devil's Dictionary

Memory is a battleground between imagination and facts. As historians of our own lives we appear inattentive and can barely distinguish between things that actually took place and those we’d like to believe were happening. And what about our memory of the events that we have not witnessed or lived through? Beautiful Liars delegates the job of recollecting the historical and mythological past to the artists: six women who, to paraphrase Robert Hughes, make us remember things they have not seen. The artworks in the exhibition employ a wide range of artistic forms and mediums to engage the viewer in their imaginary narratives. The stories told by the artists may not be entirely truthful, but they have a more important claim – the psychological and emotional veracity, the kind of truth that goes beyond the mere accuracy of facts, names and numbers.

Suzanne Goldenberg is a New York based artist, whose artworks engage with the aesthetics of mini- malism using found objects and materials. Her sculpture titled Cities We Want to Blow Up invokes the now failed revolutions of past and present, which ruminate in dreams and breathe too quietly in what are now retired objects. A rusted belt of old nails slumped over a wooden dowel, possibly the remnant of a disassembled loom, found on the rotting wood floor of an old barn in rural PA, becomes a bando- lier across Zapata’s heroic chest when leaned against the wall of Goldenberg’s studio.

Tatiana Istomina is Russian-born multimedia artist living in New York. Her series of watercolors titled Female elements is based on the archival photographs of four peasant women, who had been accused of working as “female executioners” for the Red Army during the Russian Civil War; all four women were executed by the White army in 1919. Istomina’s History paintings are based on the pho- tographs of the Soviet leaders made in the 1920-30s. The figures in the paintings are overlaid and disrupted by geometric shapes derived from Suprematist compositions of Russian avant-garde artist, Kazimir Malevich, suggesting the common intellectual and psychological impulse behind the utopian visions of Russian revolutionaries and artistic avant-garde. Istomina’s silent video Historical Inquiry consists of excerpts from archival footage created in Russia between 1917 and 1939. Some of the clips come form the recordings of major historical events, while others show day-to-day life; the foot- age is manipulated by slow motion, inner looping and digital animation, which alludes to the visual language of the Russian avant-garde art.

Katerina Marcelja is a Brooklyn based artist. The histories she unravels are found, inherited and imagined; they come together from meandering in a landscape of emotional recollections. The materi- als she selects have had a previous life contributing to that landscape. Marcelja is interested in the layering of histories from the primordial to the most current and raw. Some of her objects are re-enact- ments of imagined ancestral drama. They are collections, recollections and assemblages of repeated histories, real and imagined.

Paz Perlman is an Israeli artist currently living in New York. Perlman’s fractured past, shaped by war, loss and migration, has created an urge, through art, to heal the space where time and events leave their hidden traces and scars; a fragile and unfolding process of discovery. Her works are like ruins in space, woven together from discarded materials such as broken branches and twigs, highlighting the continuous process of destruction and rebirth. The objects she creates are not necessarily beau- tiful in a traditional sense, but they convey the strength within vulnerability and the melancholic tran- sient nature of our existence.

Lynn Umlauf is an artist born in Austin, TX, who now lives and works in New York. Her paintings Marsyas and Apollo are part of a group of artworks she began in February 1993, after seeing Titian’s painting The Flaying of Marsyas. According to the Greek myth, Marsyas dared Apollo to a contest of music: he who played most beautifully would command the loser. Umlauf has abstracted the story into painterly compositions, which use color, form, and movement to express the ambition and failure of Marsyas. Like Titian, she sympathizes with Marsyas; he is a satyr with human pride and ambition, and the paintings shows his strength and vulnerability in contrast to the divine, violin-playing Apollo.

Florencia Walfisch is an Argentinian artist living and working in Buenos Aires. Her triptych Class of 1970 was born from encountering her old and forgotten school notebook that described the experi- ment she was asked to conduct in class as a child. The condensed violence of induced asphyxiation of an ant performed by a teacher as an exercise with a group of 9- and 10-year-olds seemed to bring into the classroom much of the violence of the outside world. From that memory came the selection of the words avión (airplane) and capucha (hood) in her work, with their relationship to the world of childhood and the sinister meaning they gained during the last military dictatorship in Argentina.