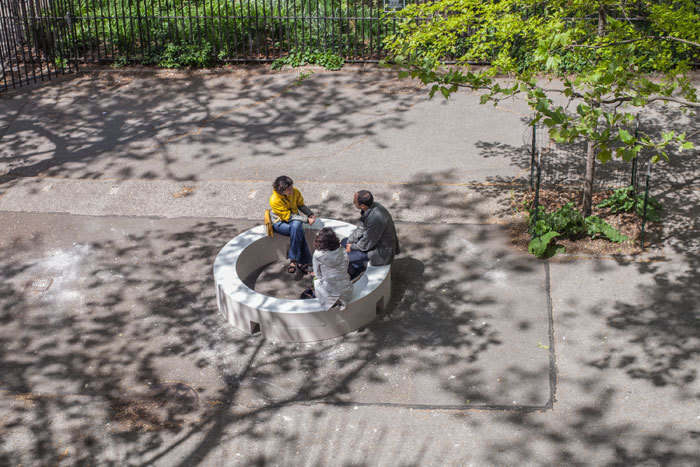 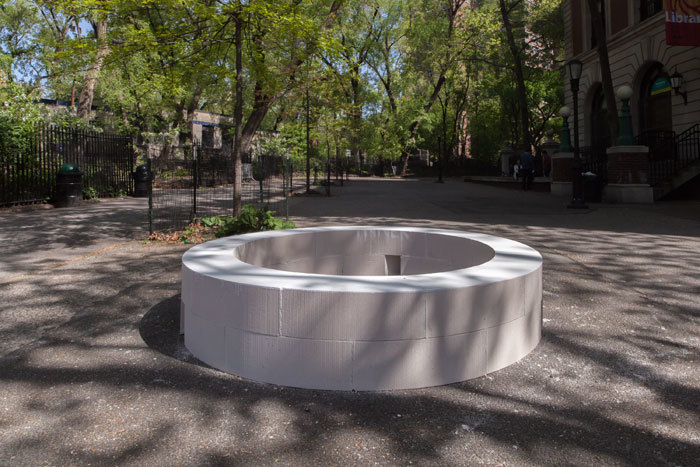 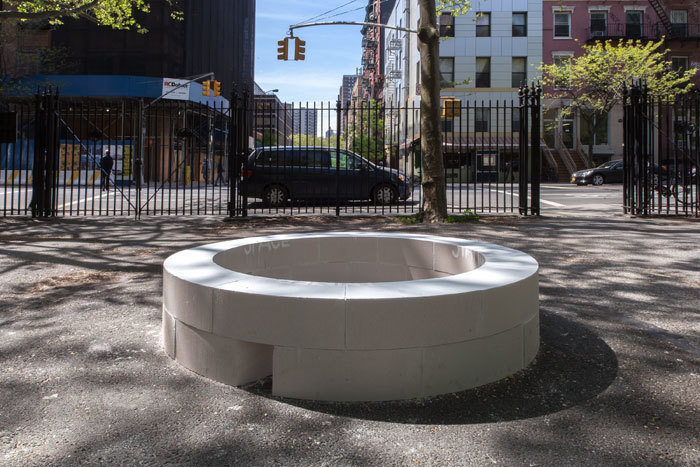 Exhibition runs from May 7 - June 30, 2013.
Located at the SE entrance of Seward Park, East Broadway at Jefferson Street
in front of The Seward Park Branch of the New York Public Library
Open daily from dawn till dusk.

Protocinema presents Can Altay's Inner Space Station, 2013, a territorial marker in the form of a circular bench, installed in cooperation with New York City Department of Parks & Recreation's Art in the Parks program. Altay's work draws on the limits of public space by creating a temporary inner space that is a simple gesture towards introspection.

Inner Space Station is a circle, approximately six feet/ two meters in diameter, made of concrete blocks, just high and deep enough to make a quiet park bench. Regardless of the direction one is facing while viewing or sitting on the sculpture, there is the unavoidable aspect of positioning oneself either on the inside or on the outside. This simple gesture of proposing a boundary as a resting place expands to wider philosophical concerns of what is permitted, where and when. How is one's behavior altered in this and other situations? Can this space, created by Altay, become an introspective space? These questions maintain among the artist's' long standing concerns. As he discusses in a 2010 interview with curator November Paynter - "The work had to do with boundaries, how these boundaries were performed in many different ways, and how they could be shifted, or even transgressed along with an acknowledgment of their existence. So for me, the gesture .... was no simple gesture, it was a defining movement that created ... an almost invisible piece which was actuality very present." [1.]

In a recent conversation in Istanbul organized by Protocinema, with Dan Graham, Altay observed "The work requests a kind of'dwelling in', rather than a'gazing upon' - viewers have to go inside to fully appreciate the alternating perception." [2.] It is this shared sensibility that inspires Altay's drawing/bench/sculpture for New York City. Positioned between art and architecture, Inner Space Station investigates the functions, meaning, organization and reconfigurations of shared civic public spaces. Altay attends to the behavioral experience of individuals in public and semipublic areas as both subject and material, crafting poetic alternatives and supplements to the city's existing urban fabric. Inner Space Station is at once an intervention in and contribution to the life of New York City.

Can Altay was born in Ankara and lives and works in Istanbul. His most recent solo exhibitions include: "COHAB: an assembly of spare parts" at Casco: Office for Art, Design and Theory, Utrecht, NL, 2011; "The Church Street Partners' Gazette" at the Showroom, London, UK, 2010; "Setting a Setting / Forecasting a Broken Past" at Künstlerhaus Bethanien, Berlin, Germany, 2008; "Ey Ahali! / Setting a Setting / Letting a Setting Go," Spike Island, Bristol, UK, 2007; "Can Altay: No Bar, Just Bottles, The Abstract Cabinet" at Sala Rekalde, Bilbao, Spain, 2006. Recent public projects include: "Public Commissions: Distributed," a Cultural Olympiad Commission, Frieze Projects East, Festival of 2012, London, UK, 2012; "The Ground was Divided, We Jumped," at the Transeuropa Festival, in London, Paris, Bologna, Cluj Napoca, 2011; "PARK: Bir Ihtimal," at Nişantaşı Cumhuriyet Parkı, Istanbul, 2010. Altay has a PhD in Art, Design and Architecture from Bilkent University, Ankara; a post-graduate degree on Critical Studies from Malmo Art Academy and Lund University; MFA and BFA on Interior Architecture and Environmental Design from Bilkent University. Altay teaches at the Istanbul Bilgi University Faculty of Architecture.

Laura Raicovich is Director of Global Initiatives, Creative Time. Previously Deputy Director, Dia Art Foundation, Senior Publicist at New York's Guggenheim Museum. Raicovich graduated from Swarthmore College and holds a Master's Degree in Liberal Studies from the Graduate Center at the City University of New York. She is the author of At The Lightning Field, a lyric essay and parallel text to Walter De Maria's renowned artwork, which will be published as a book this year.

Founded in 2011, Protocinema is a nonprofit art organization that makes transnational, nomadic exhibitions in Istanbul and New York, with the support of the Hands-on Education Program. For more information: Please contact Mari Spirito, [email protected] 917 660 7332 or +90541 468 0214, and visit us at www.protocinema.org

NYC Parks Art in the Parks' public art program has consistently fostered the creation and installation of temporary public art in parks throughout the five boroughs. Since 1967, collaborations with arts organizations and artists have produced hundreds of public art projects in New York City parks.