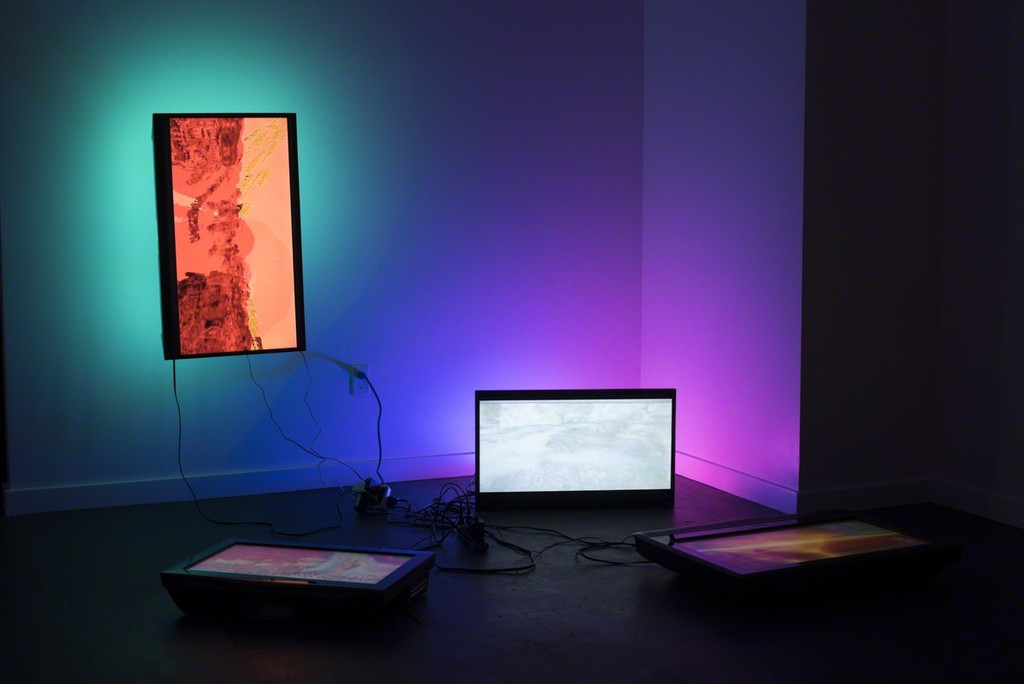 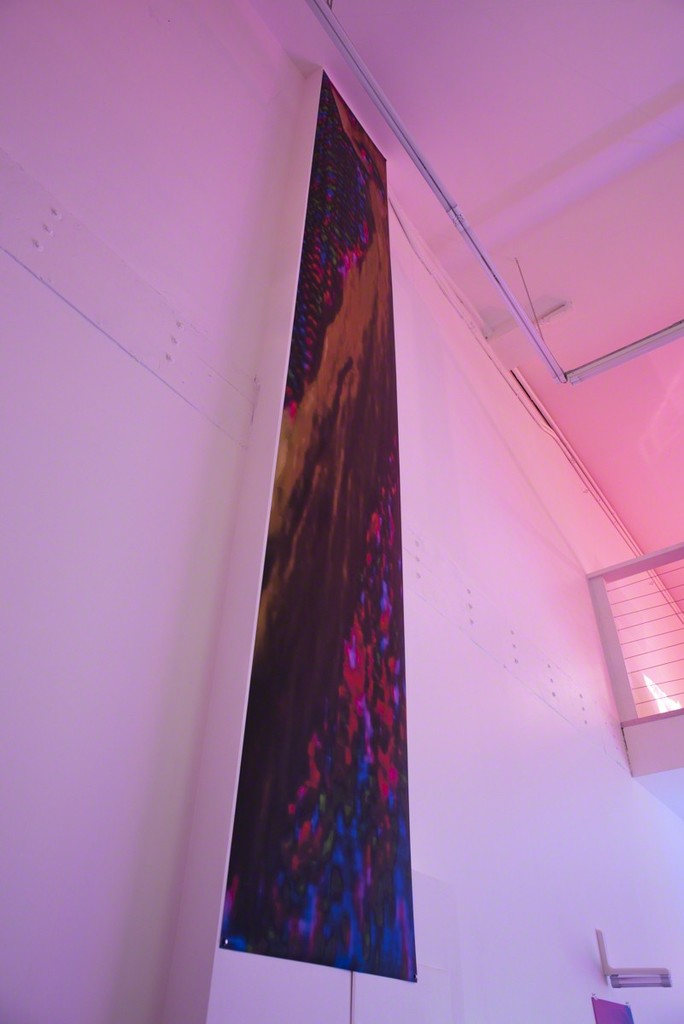 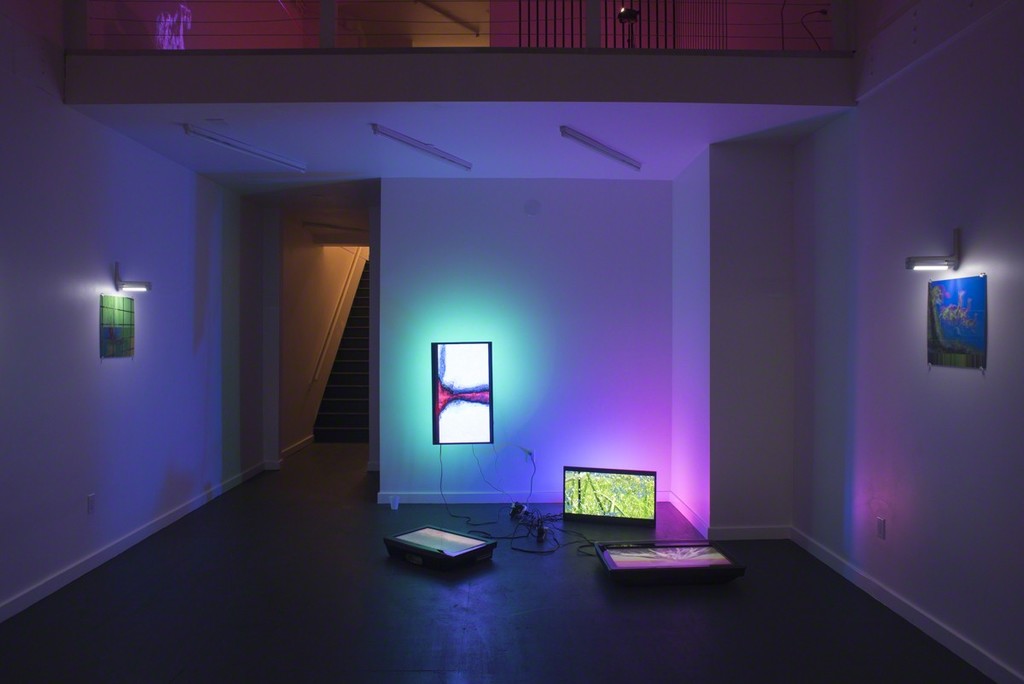 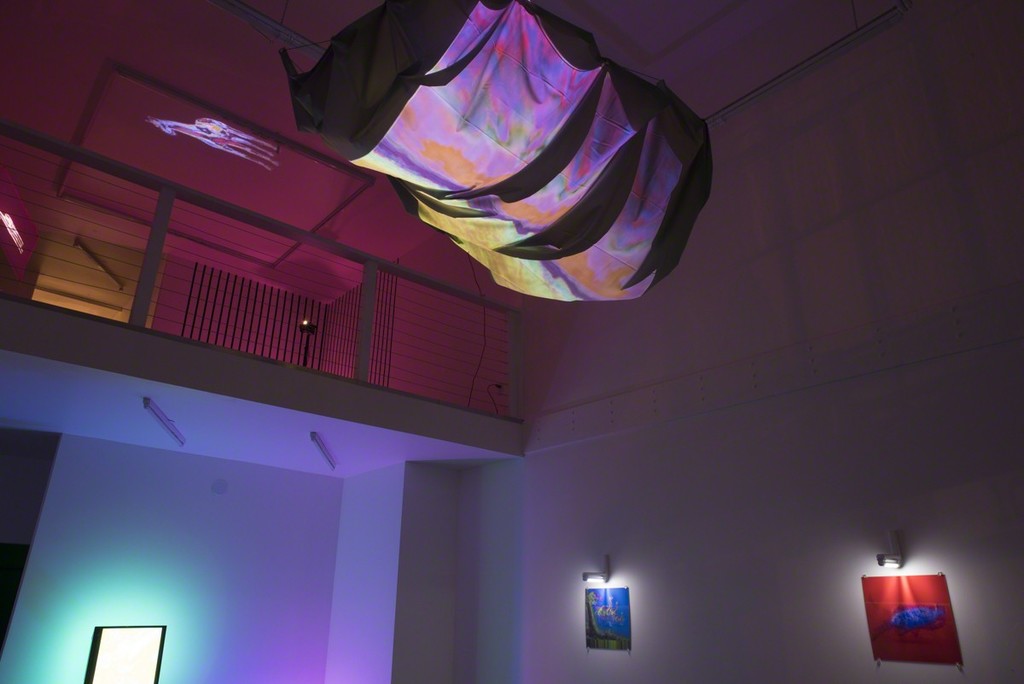 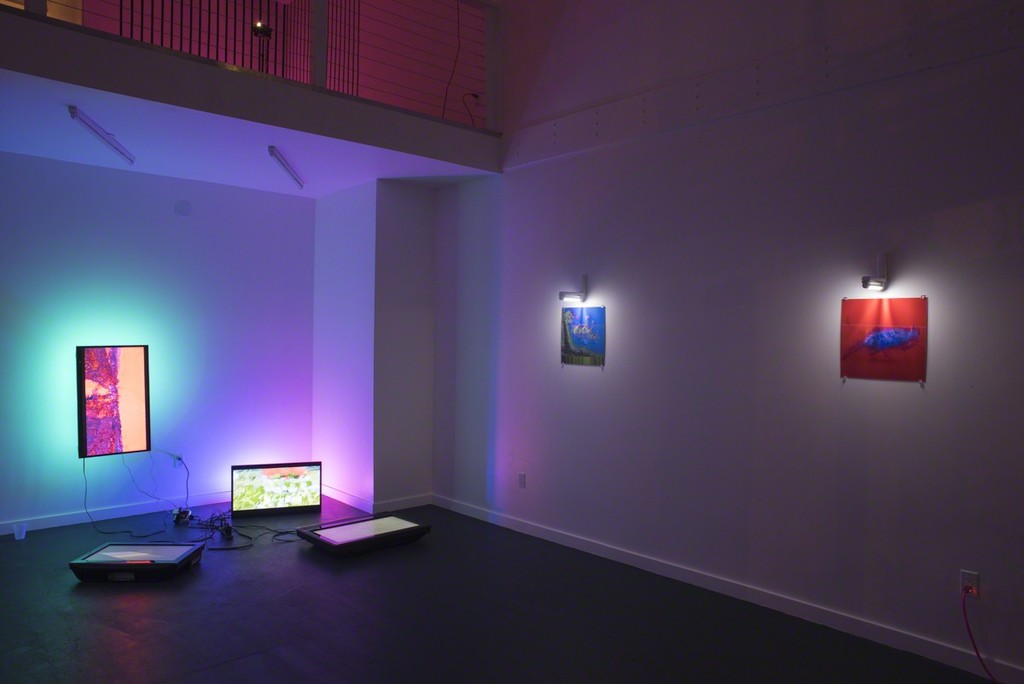 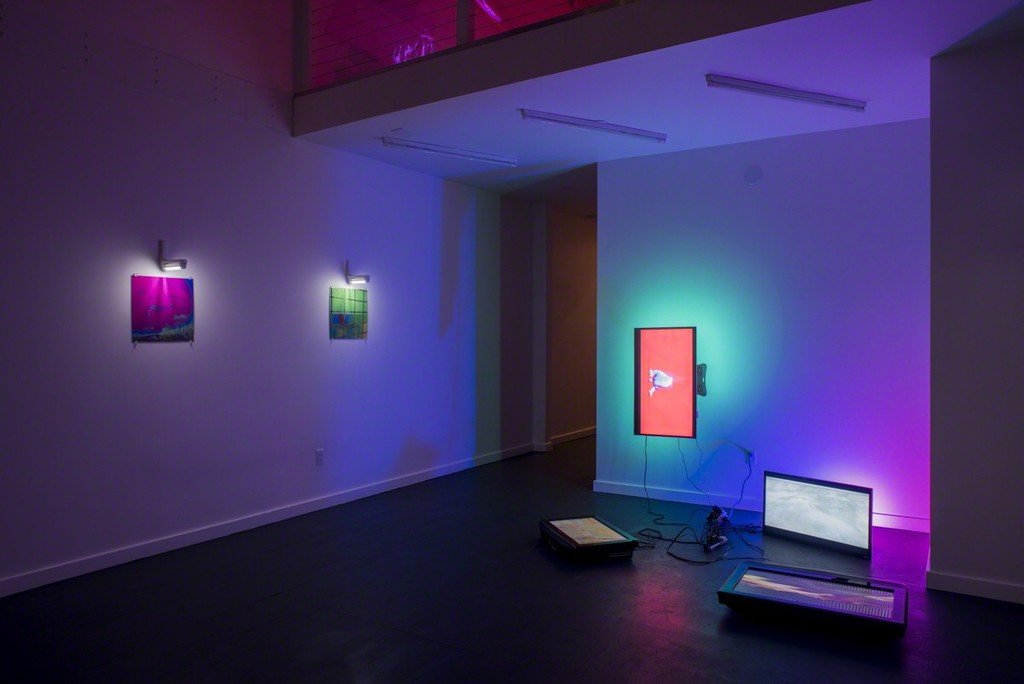 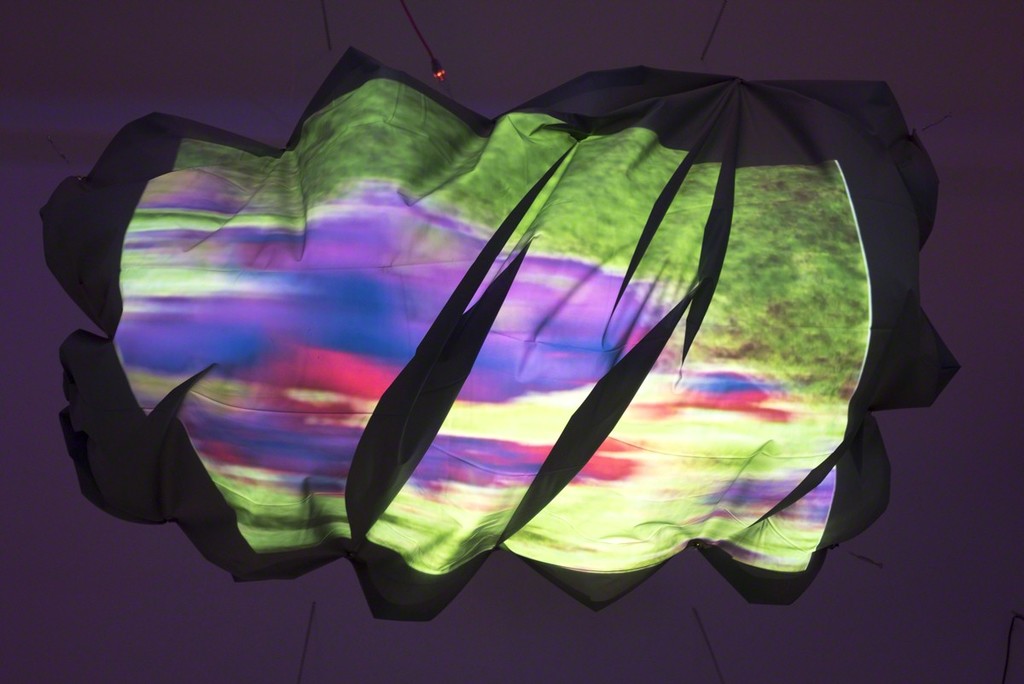 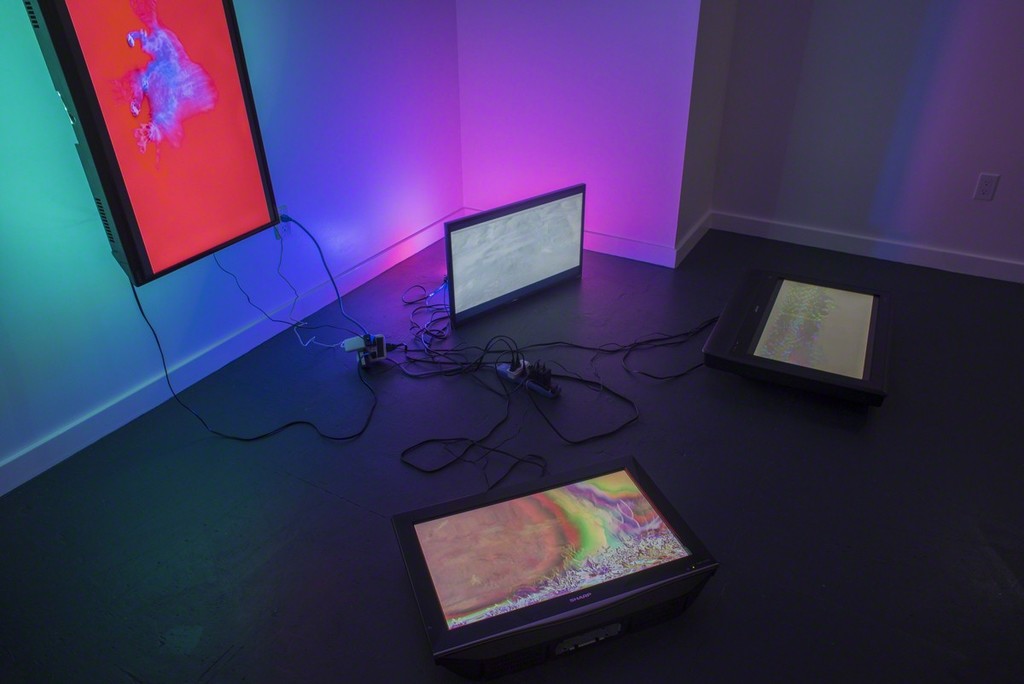 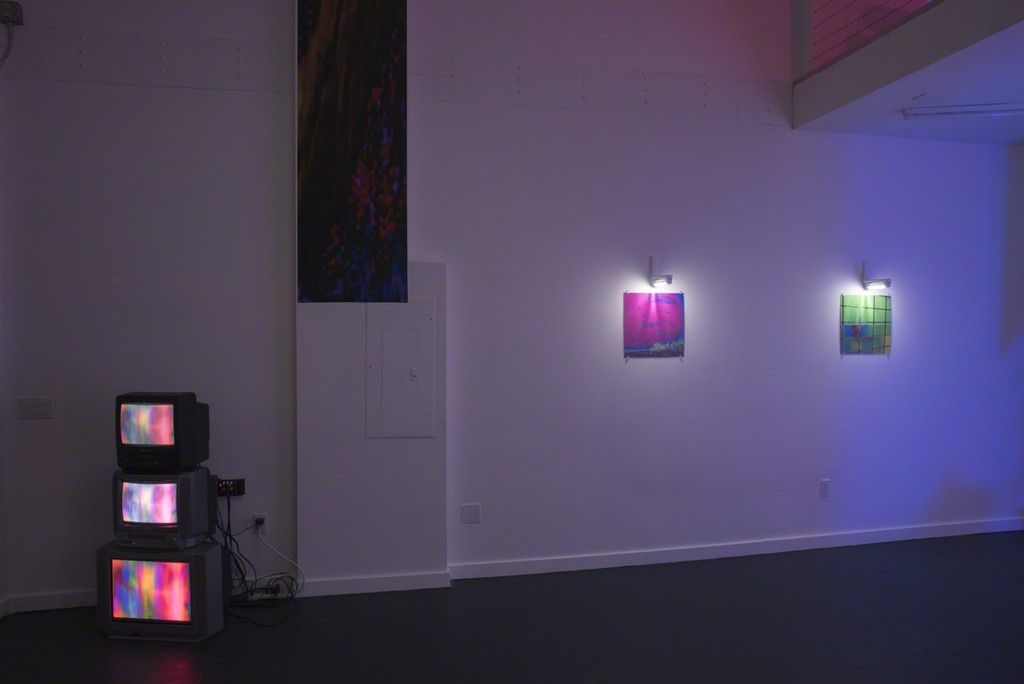 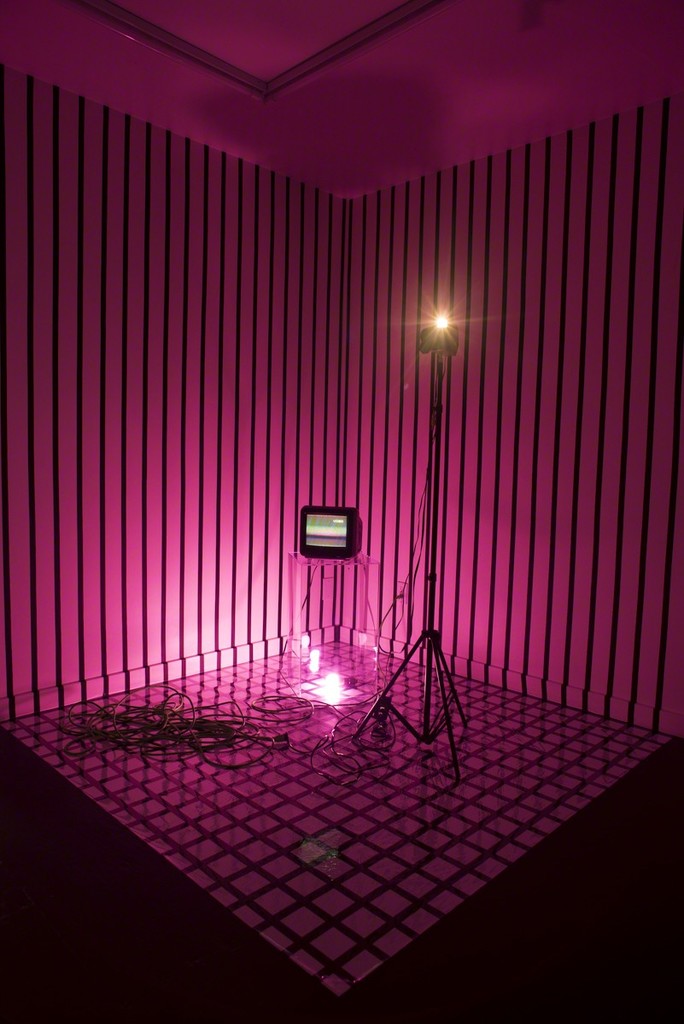 As its moniker suggests, Currents investigates the nexus of nature and technology, on both the macro- and micro- levels. Morales links the flow of electricity to wind and water patterns, the atomic building block to that of the pixel, and animal migration to expatriation, examining myriad social phenomena through digital inquiry. While industrial innovation and the natural environment are often pitted against each other as the synthetic versus the organic, Morales fuses biology and technology to spur transdisciplinary dialogue, as well as a holistic take on futurology. Where artmaking has habitually depicted man’s perpetual pursuit to triumph over nature, Morales parallels both forces as commensurate, mobilizing new media as the platform for analysis and exchange.

Punctuating the gallery’s architectural elements, Morales’ inordinately site-specific terrain invites viewers to traverse a sensorial microcosm as transients within disoriented space. Immediately upon entering, The Cloud (2017) hovers above as an amorphous mass cloaked in frenetic projections, recalling the omnipresence of networks and servers as much as our ultimate subservience to weather. In a series of wall-mounted lenticular prints, shapeshifting imagery of dinosaurs, fish, and waterfalls mimics the animation of Morales’ new media practice at large, reverting digital technique to analog space. Here, each work embodies the ephemeral qualities of GIF culture within semi-static art objects, referencing topics as grandiose as extinction and evolution.

Upstairs, Systemic Dualism (2017) vacillates between an array of holographically simulated tableaux, from an image of a sprinting cheetah to a tornado overlaid with cockroaches, recalling migration as innate and imperative and gesturing toward borders, refugees, and nationalism. The work reappropriates the “pepper’s ghost” optical illusion used in 19th century haunted houses and carnivals as much as it gestures toward the immeasurable potential of future technologies. And finally, in Reciprocity (2017), a CRT-enabled feedback loop incorporates the viewer’s presence amidst a gridded 3D cube, emulating geopositioning techniques to endlessly map the body in space, while emblematic of Modernism’s mark-making-as-representation. As the device filters the viewer’s appearance to replicate the mediation of social media platforms, the work comes to embody an installation in the true sense of the term, requiring participation for activation. Perhaps upon seeing ourselves reflected upon the landscape we become equipped to project man’s long-term impact on our surroundings, made self-aware, however momentarily.

Throughout the exhibition Morales knowingly toys with speed, from the immediacy we expect in a narrative arc to our limited comprehension of time. Drawn-out and unhurried, each work blurs the line between vignette and video, producing painterly landscapes that bespeak the notion of ‘slow time’. While Morales’ overly saturated color palette has characteristically alluded to Guatemalan markets and garb, within Currents, each color begins to speak to larger concepts of light, vibration, and human perception. As Morales anthropologically mines migration as fodder for visual exploration, she deftly instigates new dialogues around our relationship to the planet. Her practice parallels techniques of error aesthetic, glitch, and synthesis to phenomena of the natural world, where global warming and geoengineering may be interpreted through data degradation and mutation, rooted in human intervention.