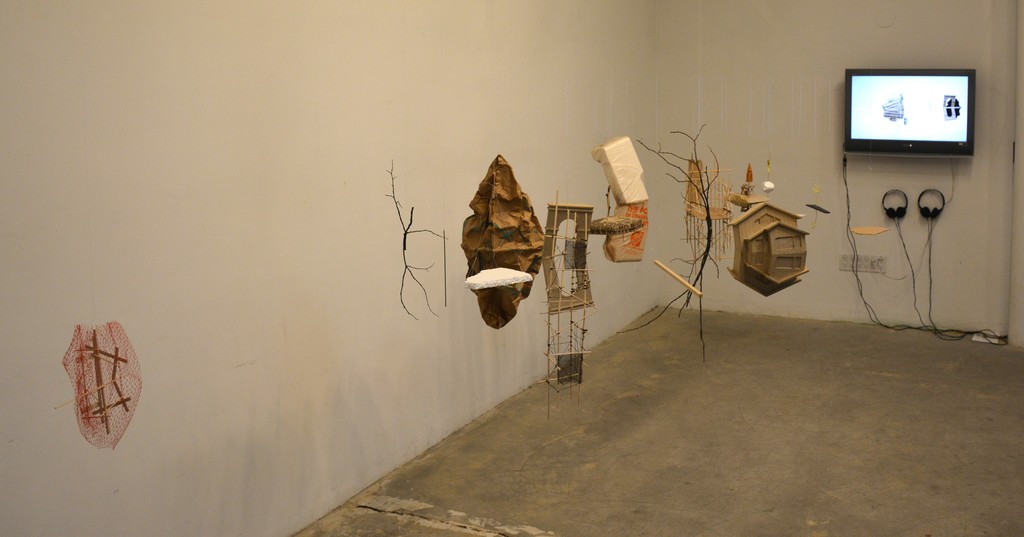 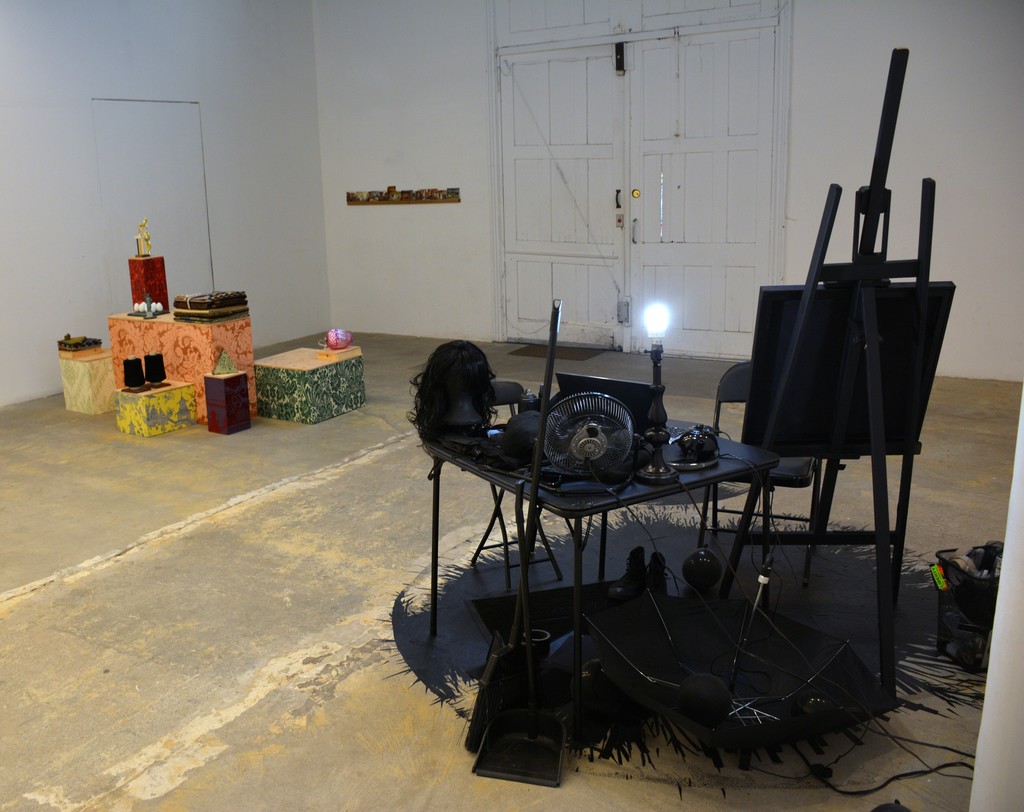 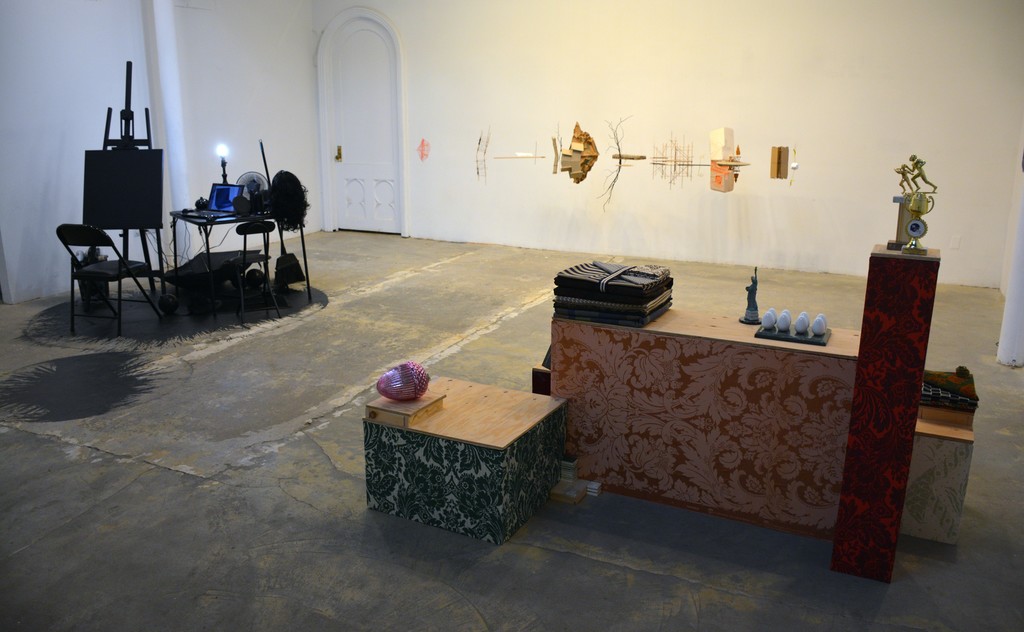 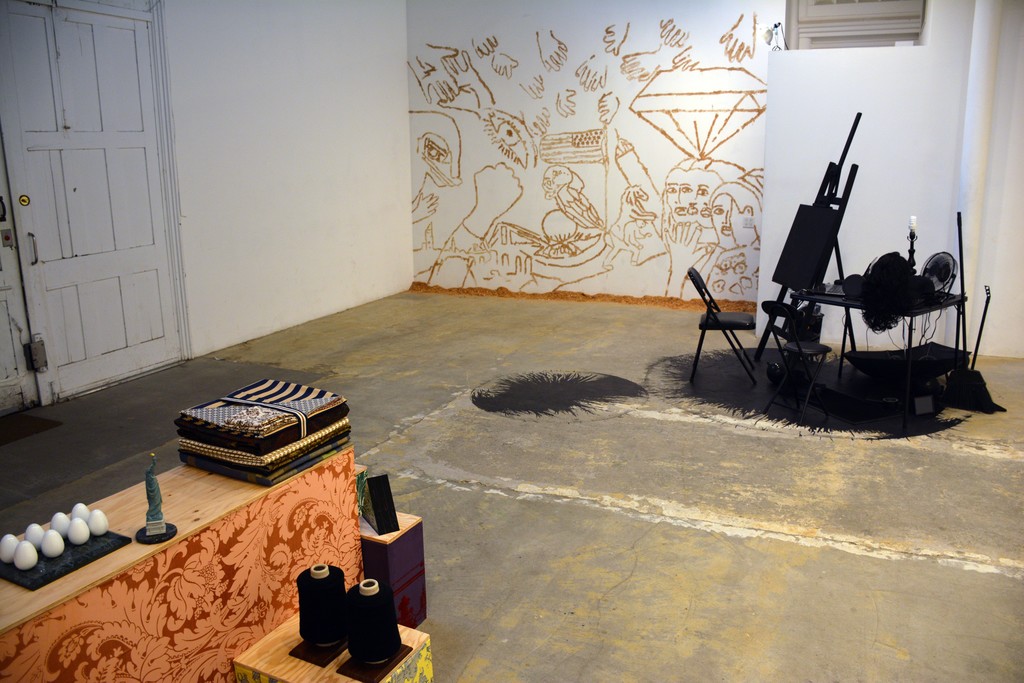 Structures and Layers presents works by RU international artists Mehryl Levisse, Manuela Viera-Gallo, Michael A. Robinson, Ismael Kachtihi del Moral and Cho Mi Young. Despite their distinctive concepts and aesthetics, the shared thread in their practices can be defined as an infusion with concern about contemporary identities – seen as multilayered and structured of various personal, social, political and cultural particles.

With The Foundation of the Perfect State, Mehryl Levisse (French) researched objects in thrift and souvenir shops in New York City that contain bits and pieces of American history and tropes of its national identity, modified and mass produced, such as ceramics, wallpaper, fabric, postcards and other various touristic trophies. Taken out of their usual context, he organizes them in a mode traditionally associated with “high art” public museum displays. Pedestals and wall shelves, with their austere appearance, create a stark contrast with these vernacular widgets. The work underlines the notion of constantly shifting cultural and social values and their more formal, institutional affirmation, while also presenting a ruptured, semi- autobiographic narrative of the artist experiencing history and the present of a particular place, as a visiting artist.

Manuela Viera-Gallo’s (American) multimedia work is influenced by her own personal story of multigenerational migrations, displacements, search for a better life and the notion of belonging. For the mural Cronogram, she glued sawdust of a typical oak wood from her native Chile on the wall surface. The mural motifs reflect on Latin American but also global immigrant issues and are rendered in a reductive style reminiscent of indigenous art as well as early Latin American monumental revolutionary mural projects. They represent a complex allegory of a foreigner experience in a “promised land”, with for example the flag of the USA surrounded by a diamond and numerous hands reaching to them.

With How to make a black monochrome Michael A. Robinson (Canada) investigates the mechanisms of the existing art system and his role as an artist, the circulation of different materials and recurring motifs from art history that seem inexhaustibly inspiring even for the most recent global artistic production. Take the motif of monochrome, widely revisited in the last several decades, it appears that its formal and seemingly reductive language still inspires artists to grapple, in Robinson’s words, with materiality and search for meaning through the ideas of non-objectivity. With How to make a black monochrome , a work clearly inspired by Ad Reinhardt, Robinson has assembled his own monochrome with black items collected in the streets of New York City.

Ismael Kachtihi del Moral’s sound installation, Mon bazar incorporates meticulously recorded, manipulated and orchestrated sounds associated with childhood which trigger personal, deep memories of those times of being carefree and unrestrained. Whispers, poetical narrations, running sounds, lullabies, laughter envelop the spectator. This work reflects del Moral’s personal attempt of recalling these moments from his own life defined by multiple relocations and travels. Mon Bazar investigates how personal identity is constructed and what role our early childhood has in it.

The interrelation between conscious and unconscious defines the practice of Cho Mi Young. The new installation The Islands-Psychologcal Space belongs to the series Psychological landscapes. Hanging Styrofoam, cardboard, paper and various recycled materials render a miniature landscape of buildings and surrounding nature and its corresponding but reversed almost identical mirrored image. The relation between top and bottom is an allegory for inseparability yet difference between the observed and imagined, rational and irrational, real and unreal. The image of the bottom, implying the unconscious that roots and influences our cognition, is the figure commonly applied in psychoanalysis. The work is a metaphor for an ambiguous structure of identity and psychological spaces that are constantly shifting entities.

Zeljka Himbele Kozul is director of Christian Duvernois Gallery, New York. She is a 2006 graduate of the Center for Curatorial Studies at Bard College, US. In her native Croatia, she worked for several years at the Museum of Contemporary Art Zagreb, curating major exhibitions including Golden Harvest: Contemporary Chinese Art (2002); solo exhibitions of Croatian artists Ivanka Franke (2003), Ivan Fijolic (2004) and Toni Mestrovic (2004); and a solo exhibition of Croatian/Dutch video artist Dan Oki (2004). She also curated exhibitions for non-profit spaces in Zagreb and served on the editorial board of Kontura, a Croatian art magazine. In summer 2011 she organized the site-specific exhibition of the artist Mark Tribe, and in January 2014 curated the exhibition by Irish artist Duncan Campbell, both at MK Gallery in Zagreb. From 2008-2010 she worked at the Contemporary Art Department of the Museum of Art, Rhode Island School of Design, Providence, RI, where she curated a series of solo and group exhibitions for New Media Gallery, such as solo exhibitions by Mika Tajima, Avish Khebrehzadeh, and Shih Chieh Huang and the group exhibition Alternating Beats. She was a guest critic, lecturer, panelist or exhibition juror for the institutions The New School, NY; Dumbo Arts Center, NY; Residency Unlimited, NY; Flux Factory, NY; Chester College, NH; Cambridge Art Association, MA; Parsons The New School for Design, NY; and Brown University and Rhode Island School of Design, RI, among others. Additionally, Mrs. Himbele Kozul was a Curatorial Fellow at Art in General, curating the exhibition at Bloomberg LP headquarters, and also curated exhibitions at NURTUREart in Brooklyn, NY; Big Medium Gallery in Austin, TX; Dorsky Gallery Curatorial Program, Long Island City, NY; Stephan Stoyanov Gallery, NY; Cuchifritos, NY; Illuminated Metropolis, NY; Occurrence, Montreal, Canada; and Futura Gallery, Prague, Czech Republic.

This program is supported, in part, by public funds from the New York City Department of Cultural Affairs in partnership with the City Council.