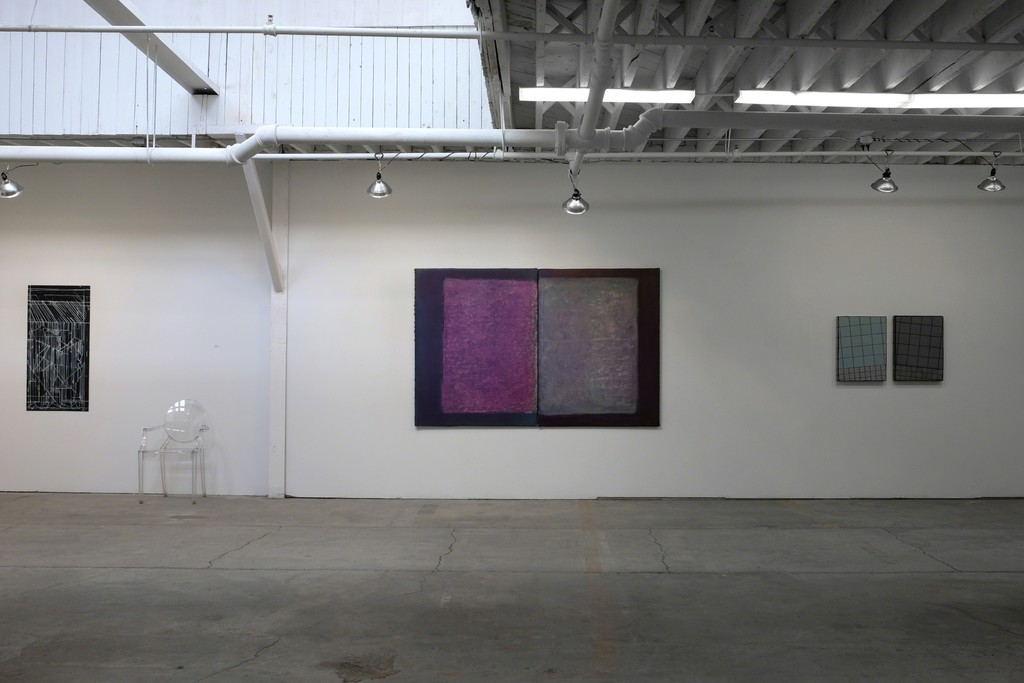 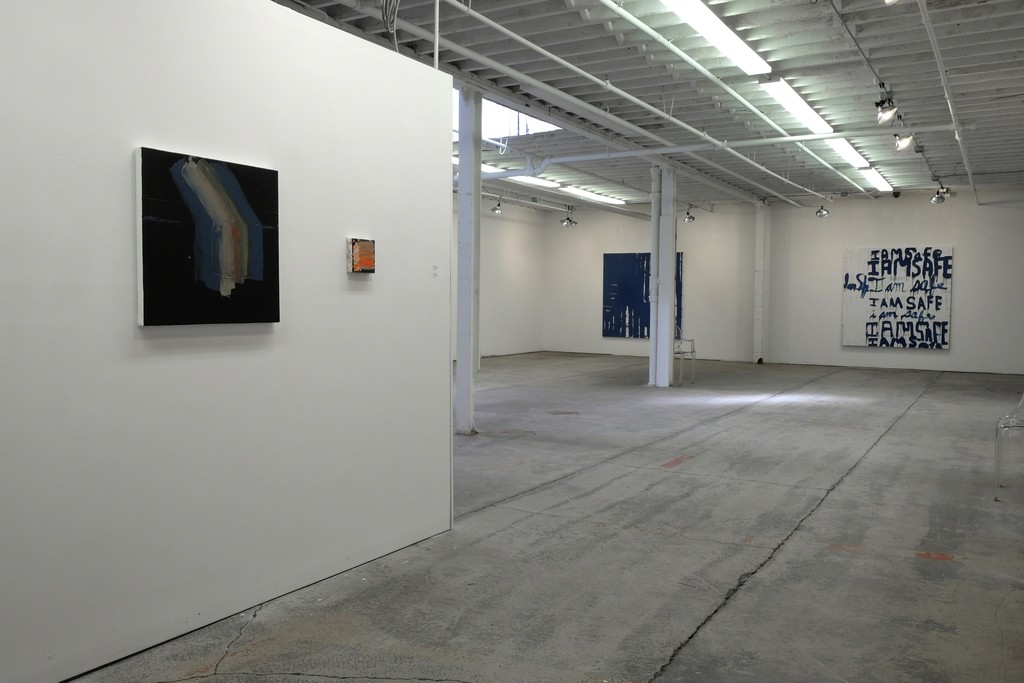 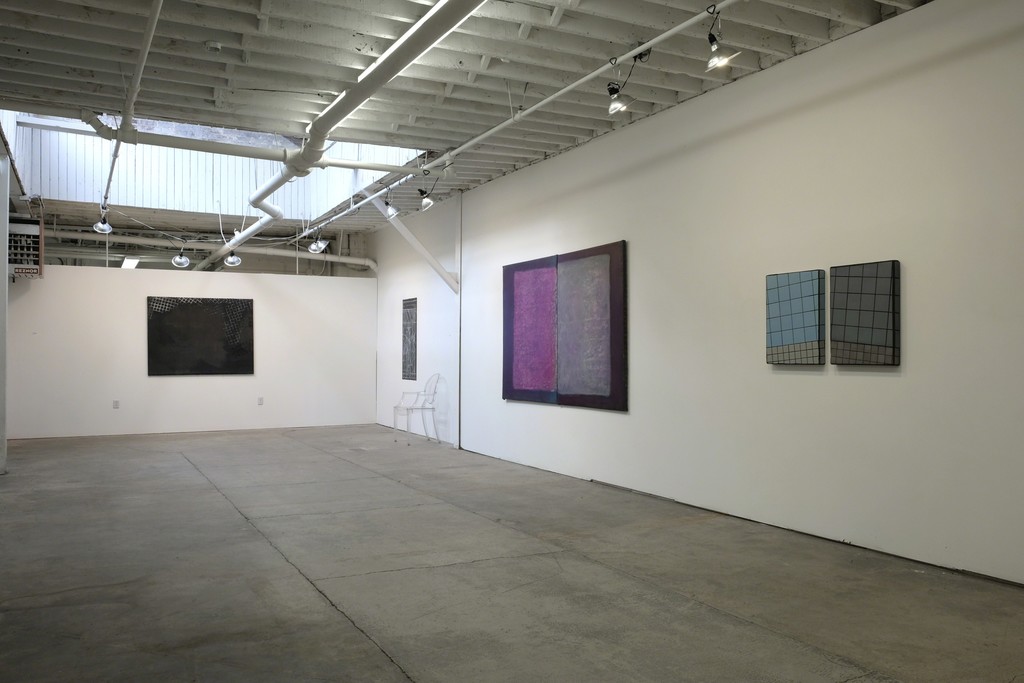 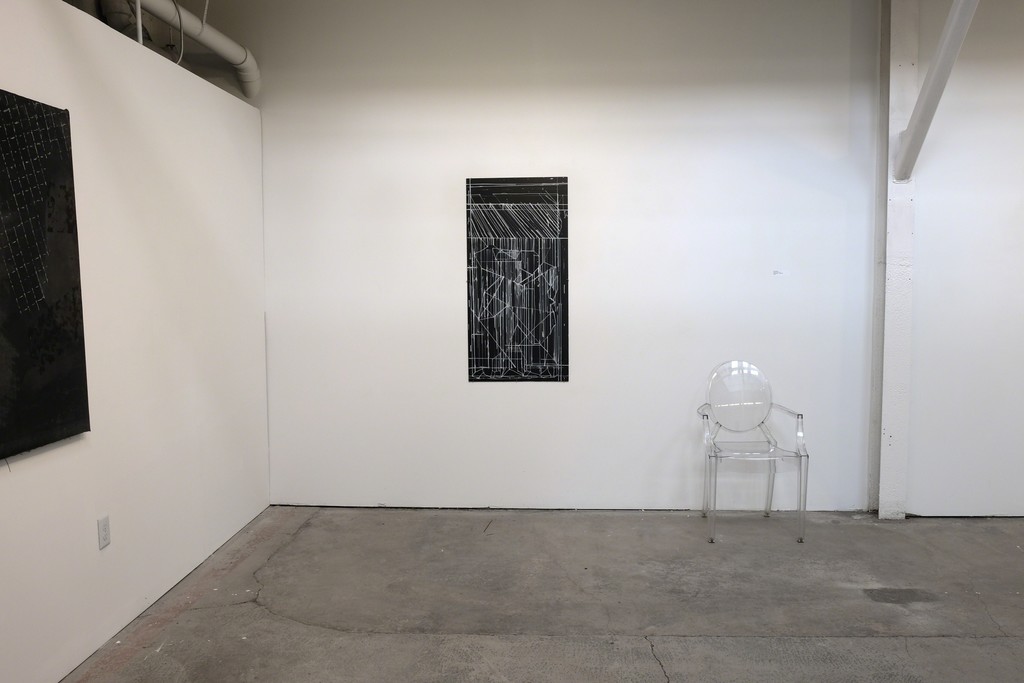 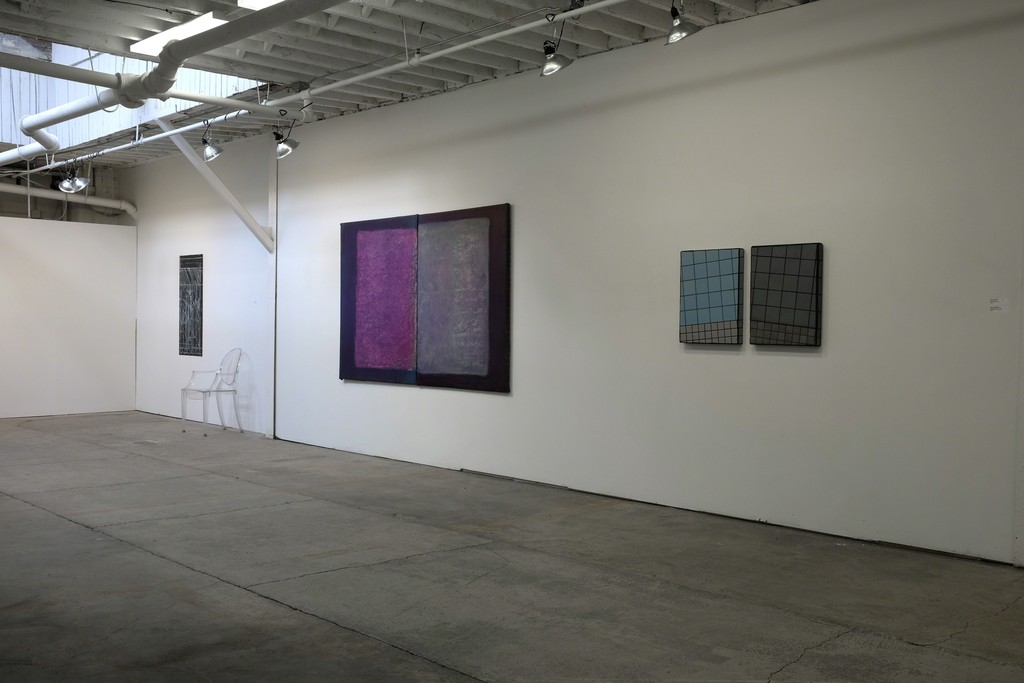 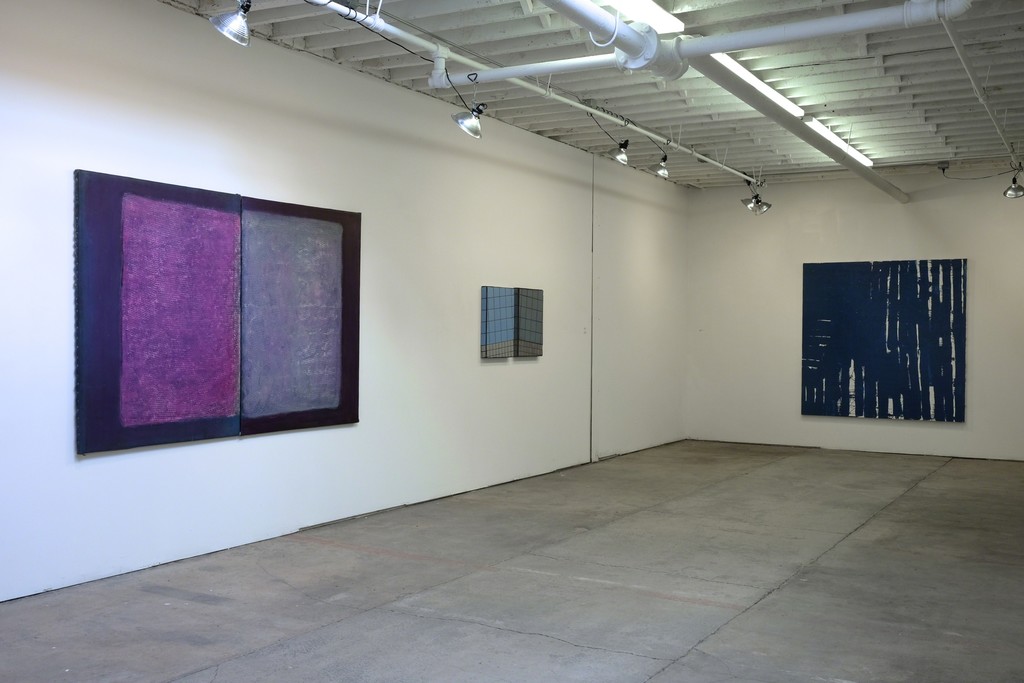 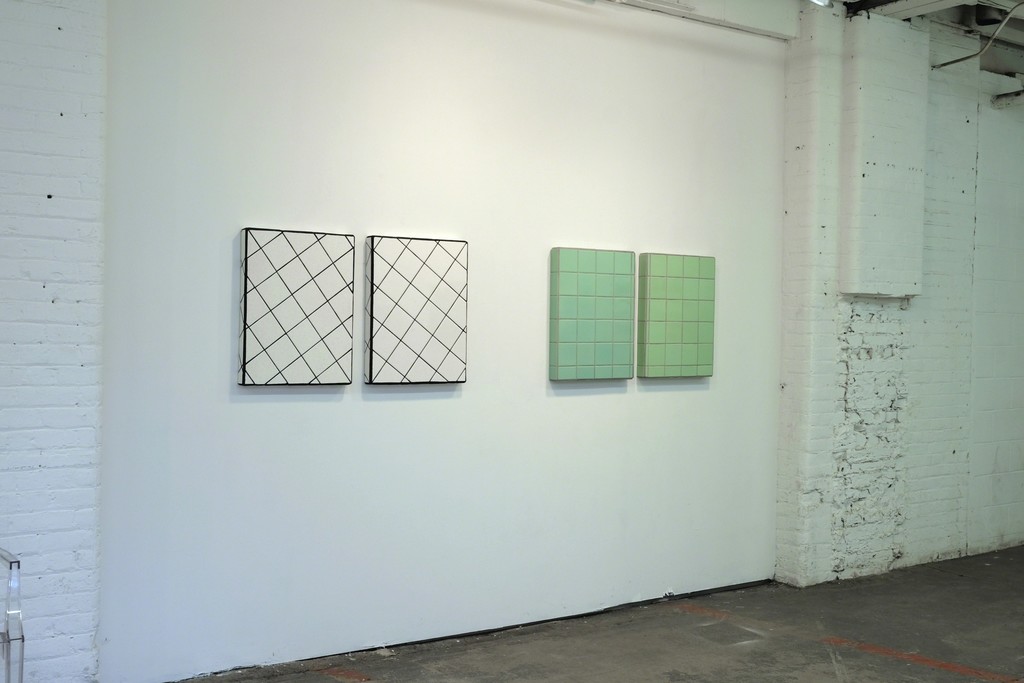 BT&C Gallery announces CHASM, an exhibition bringing together work by Joe Bochynski, John E. Drummer and Pam Glick. CHASM opens Thursday, September 10th with a reception from 6-9pm. The show will remain on view through October 16th. The work in this exhibition is about monumental scale and the space between reality and perception of reality as seen in Glick’s painted interpretations of Niagara Falls, through Drummer’s sublime abstractions and Bochynski’s glossy tile works. All the works included in CHASM speak powerfully to the viewer in an attempt to rationalize something greater than us. The result is transcendent.

CHASM includes a recent series of oil paintings by Pam Glick inspired, in part, by Niagara Falls. Glick has taken the local collective of massive cascades and translated the hundreds of thousands of falling gallons per second into a flattened geometric composition. How can one harness the amazing power of the Falls and capture a moment when the subject is in perpetual motion— forever changing? There is nothing measured or confining about Glick’s fluid geometric language; Glick’s painterly approach is present even in those paintings that include harsh angles. Glick explains:
Niagara Falls is a subject I’ve been painting off and on since the 80s— it symbolizes home. The pull of the water going over the ledge is a metaphor for both change and inevitability. The geometry of its 45-degree angle and contrasting elements have endless possibilities for me including ideas of stillness, motion, color, repetition, and mystery.
Through her painting, Glick has managed to deconstruct and capture the flowing water, allowing for a closer, isolated perspective with myriad interpretations. The standouts are Glick’s large-scale works built with visceral brushwork— sumptuous canvases with a conceptual edge. A departure for Glick, this new body of work also includes text based paintings coming out of the same vein, conceptually and through a shared palette of white and cobalt— a nearly Ives Klein blue. In the feature piece, the mantra “I am safe” is repeated in drippy strokes with a movement that echoes the Niagara Falls paintings. Glick explains:
When I look at these words, I get the same crushing feeling in my stomach as when I look at the Falls. I’m not sure if it’s because I’m looking at the most beautiful thing I’ve ever seen, or because I’m afraid it is going to crush and destroy me.

Included in CHASM are works by the late John E. Drummer. Drummer’s canvases are stretched rubber that has been manipulated— sometimes dyed various shades of usually blue or green, other times stitched or layered with tar, gravel and dirt. These works communicate intense emotion through vast fields of deep, dark matter. Sometimes comprised of several canvases hung together, the scale simultaneously dwarfs and engulfs the viewer, reminiscent of modernists of the color field tradition. Drummer’s works on rubber can be read as communicating the vastness of our world. In an artist statement from 2007, Drummer spoke of two distinct threads in his work— that of “large-airy colored rubber” in contrast to the works with a darker palette, a blackness communicated through rubber and tar that the artist described as “landlocked.” When paired together, one might glimpse the divergence between heaven and earth.

Also a part of CHASM are a series of works in tile by Brooklyn-based artist Joe Bochynski. Installed are several diptychs from a series consisting of two panels each clad in ubiquitous ceramic bathroom tiles. Shiny and sculptural, these works hang on the wall like architectural appliqués. Titled Mimicry, the panels in each pair assume each other’s likeness, though nothing is quite exact. Bochynski has taken found tiles to create one of the panels (upon close inspection there is a certain “patina,” as evidence of the tile’s past life is sometimes subtly perceptible). The second panel is then constructed using new materials that the artist has selected to most closely match the found materials of the first panel, limiting himself to only those materials you can readily find on hand at your local hardware store. The result varies from stark contrast to an imperceptible disconnect between the two. These works speak to the exhibition’s theme on a more intimate scale, though no less vast or overwhelming. Bochynski’s work can be understood as commentary about our relationship to the mundane, but also about relationships among people. How exact can approximation be when working with the materials at hand— how well can you ultimately know another human being? There will always be that chasmic space between.

Joe Bochynski’s primary subject is the visual and material culture of the American mundane. Born into a middle class suburban family, outside of Buffalo, Bochynski is drawn to the built environment as a shared experience for many Americans, as well as a complex, personal symbol. Bochynski attended Hobart and William Smith Colleges in Geneva, New York and received his MFA in painting from the Rhode Island School of Design. Bochynski has an upcoming solo exhibition at the Davis Gallery of Hobart and William Smith Colleges titled Everybody is Everybody opening on October 16th and running through November 13th. Bochynski also has a solo installation planned for Spring 2016 at Big Orbit Gallery. Bochynski lives and works in Brooklyn.

John E. (aka “Jack”) Drummer was a prolific yet reclusive artist whose work was little shown during his lifetime. His canvases were last shown locally at the Burchfield Penney Art Center as part of the multi-venue regional exhibition Beyond/In Western New York 2007 and then later in the group show highlighting work the museum had recently acquired, or was hoping to acquire, in 2010. Before that, Drummer’s work was last shown locally at the Albright-Knox and UB Anderson Gallery in the 1990s. Drummer was most active as a visual artist in New York City in the late 1950s and early 1960s, culminating with the artist’s inclusion in the 1965 edition of the Young America series of exhibitions at the Whitney Museum of American Art that featured young artists on the rise. BT&C is thrilled to announce 2016 plans for a solo show of Drummer’s canvases to run concurrent with a solo exhibition scheduled to run February 12th- June 19th, 2016 at the Burchfield Penney. This will be a rare opportunity to see a representative collection of Drummer’s oeuvre with some of Drummer’s most monumental compositions on view in the main gallery at the Burchfield Penney.

Pam Glick was formally trained at the Rhode Island School of Design where she received a BA in painting. Glick was widely exhibited during the 1980s and 1990s, most notably in New York City with solo shows at Ramnerine Gallery (Long Island City), White Columns Gallery and Wolff Gallery as well as a solo show at Michael Kohn Gallery in Los Angeles. Locally, Glick was a part of the In Western New York exhibition at the Albright-Knox in 1981— the artist’s very first formal exhibition opportunity— and most recently at Hallwalls Contemporary Art Center as part of Amid/In Western New York. Glick’s work has also been included in important group shows alongside works by artists such as Jean Michele Basquiat, George Condo and Christopher Wool. Glick’s work is a part of many collections, both public and private, including the Eli Broad Foundation and Citi Bank. In 1985, Glick moved to Vermont to focus on works on paper. Glick has recently relocated back to Buffalo with a renewed interest in oil, which the artist describes as her “first and favorite medium.” This is the artist’s first exhibition after her return to painting.