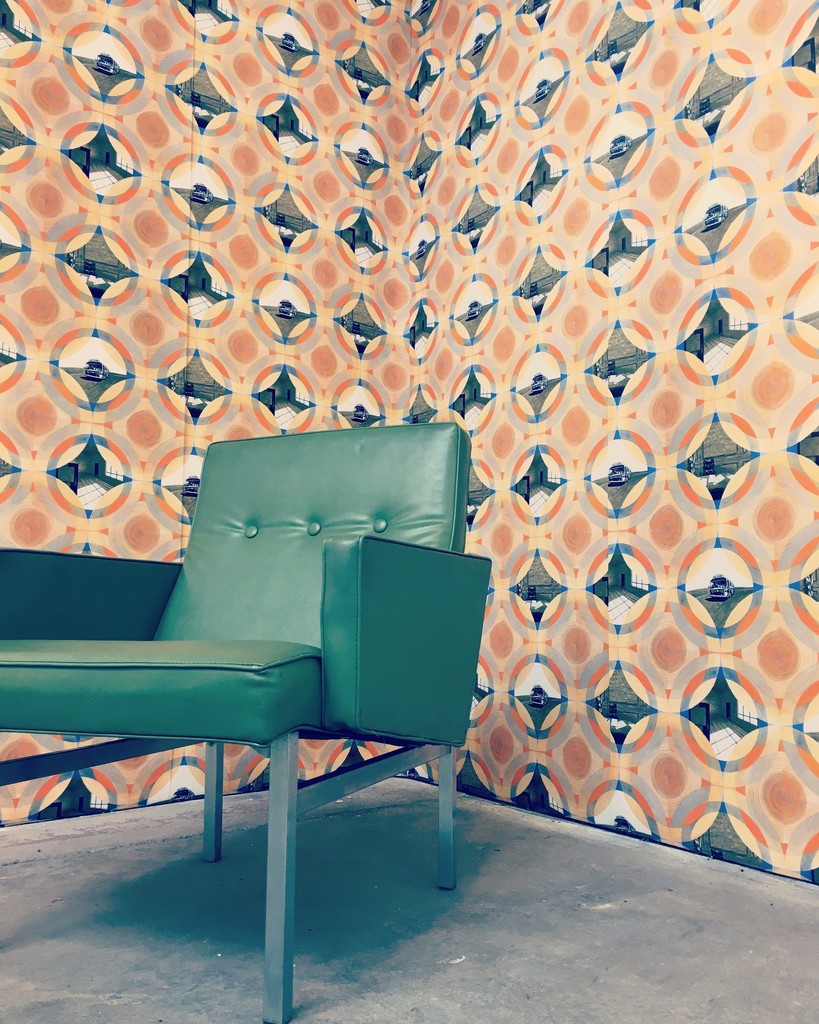 As part of the exhibition, "Prototype 1977" has been mocked up as actual wallpaper, complete with 1970s era furniture. 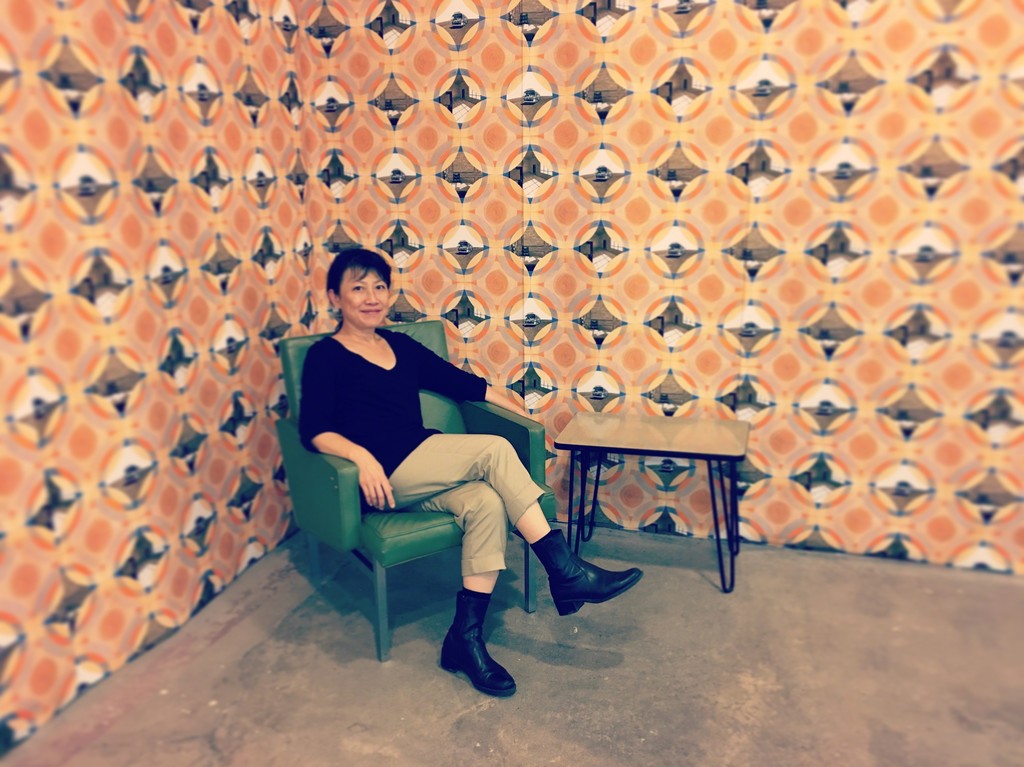 As part of the exhibition, "Prototype 1977" has been mocked up as actual wallpaper, complete with 1970s era furniture. Pictured here is the artist, Millie Chen. 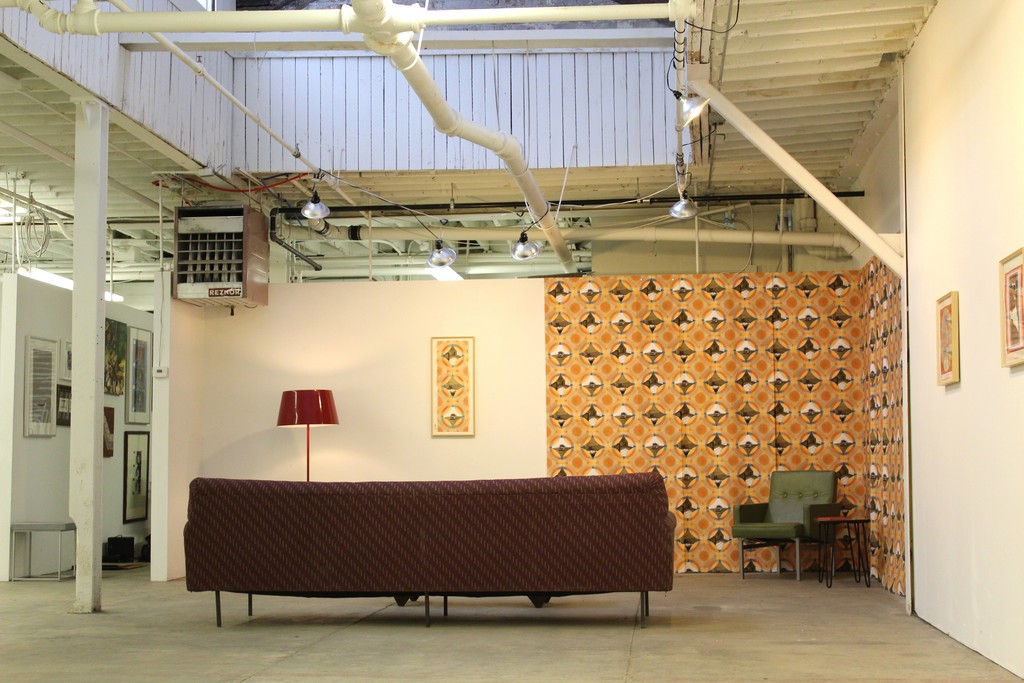 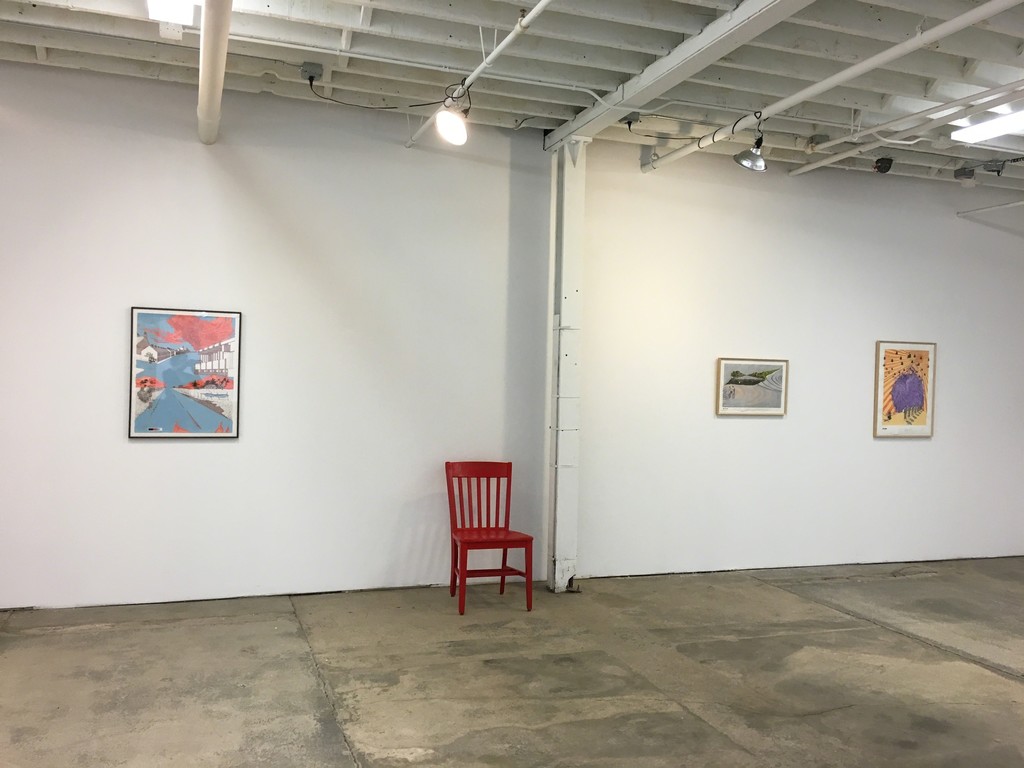 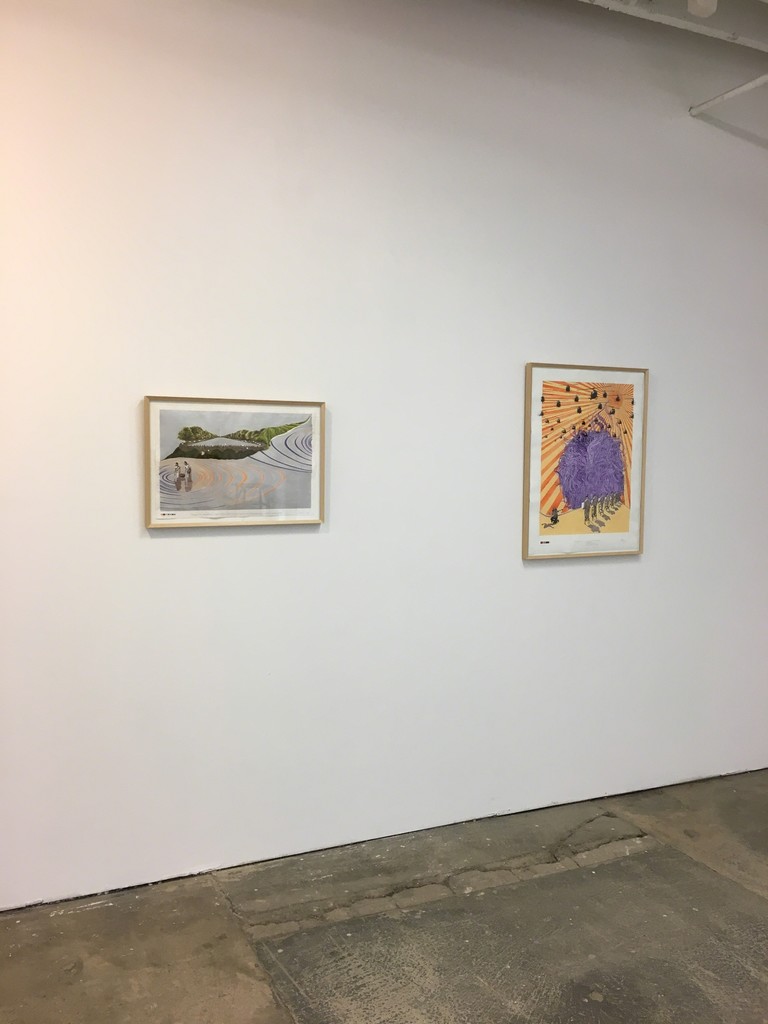 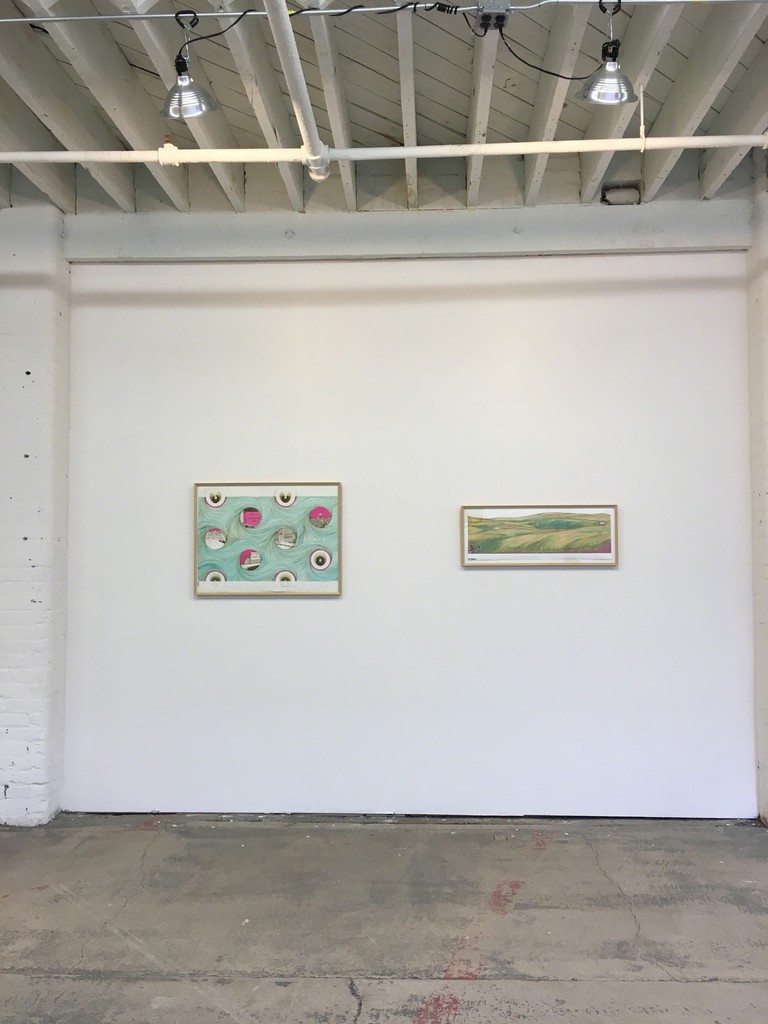 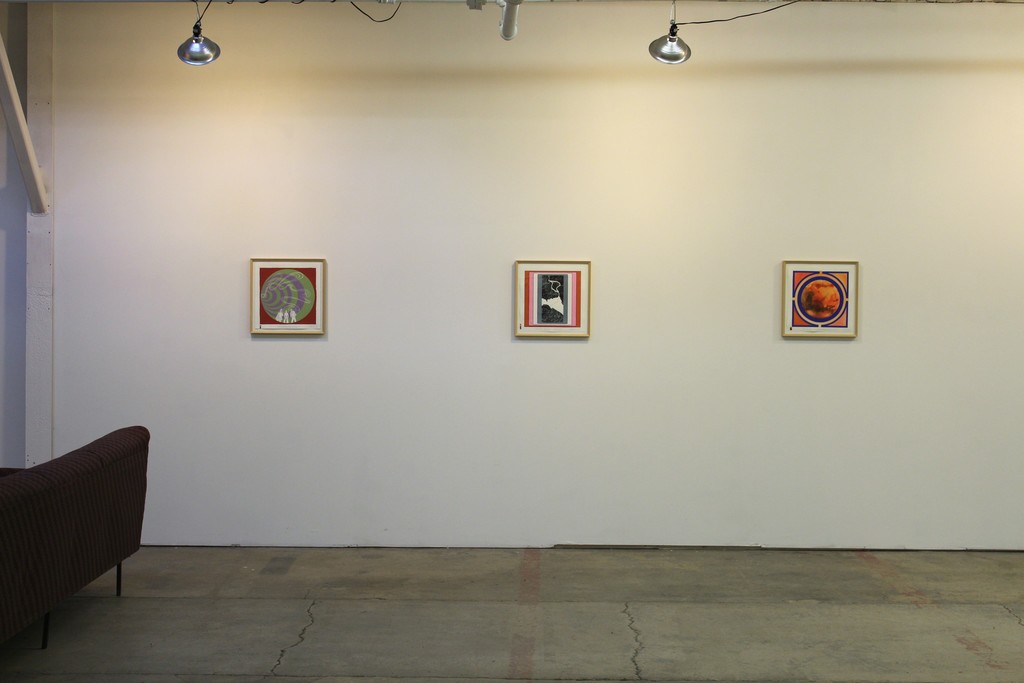 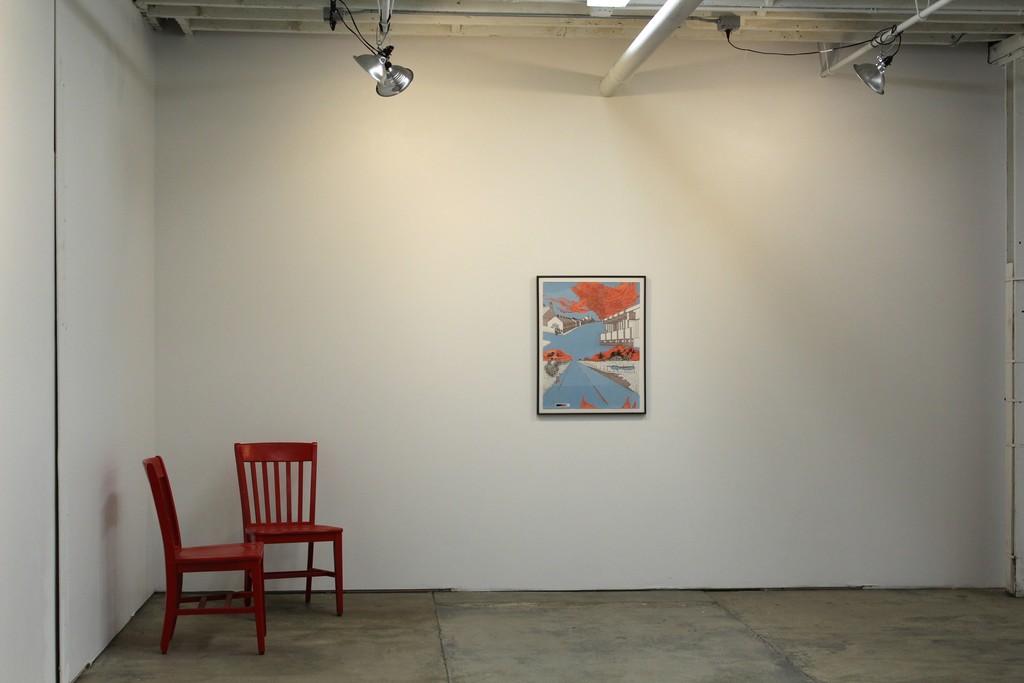 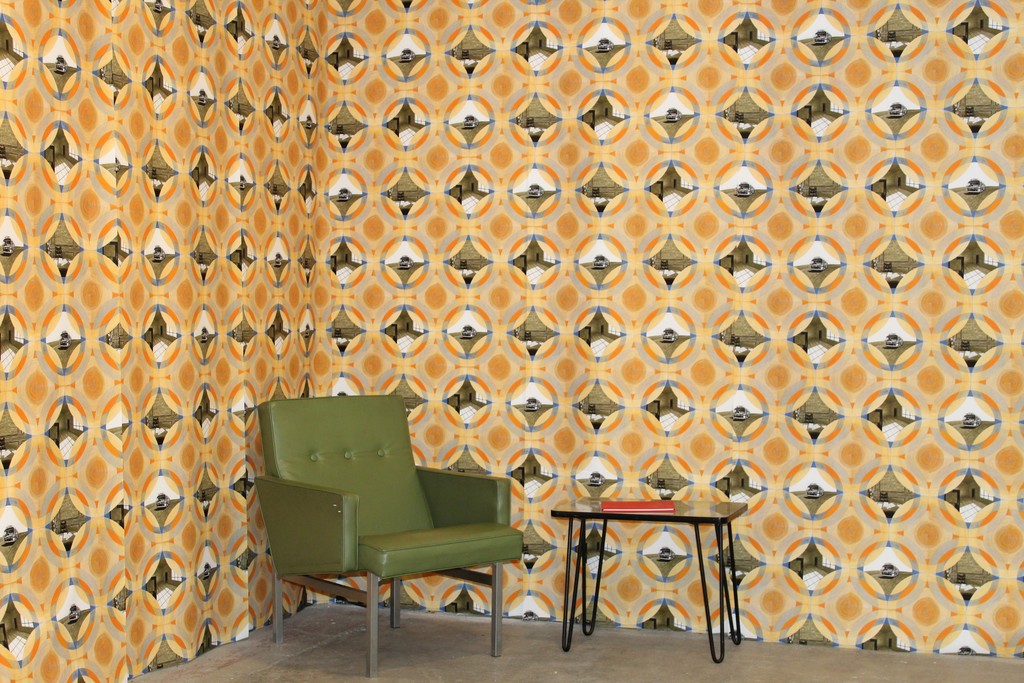 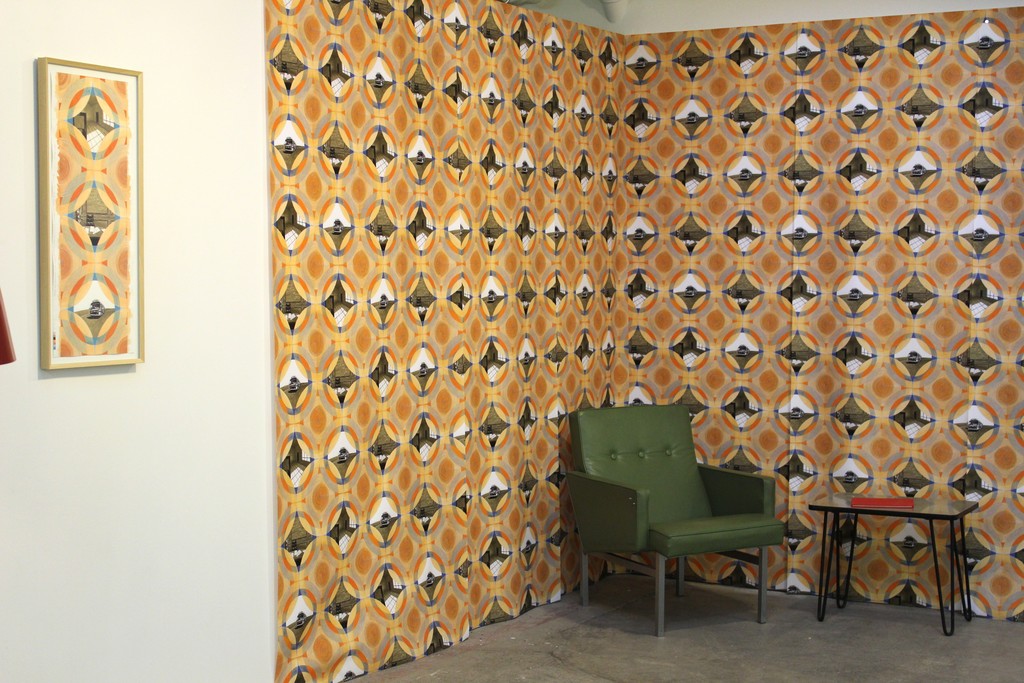 BT&C Gallery announces Prototypes 1970s, a solo exhibition of new work by Millie Chen, opening Thursday, November 3rd with a reception 6-9pm. The show will remain on view through December 17th. Gallery hours are Fridays 12-7pm and select Saturdays 12-4pm, or anytime by appointment. Contact Anna Kaplan at 716-604-6183 or, by email, at [email protected] for more information or to make an appointment.

Prototypes 1970s is titled after a recent series of works on paper by Millie Chen. The series consists of ten wallpaper designs— one for each year between 1970-1979. Each “prototype” drawing is a unique mixed media work on paper— a material rendering of an original design, or pattern repeat, for the respective wallpaper. In each “prototype,” Chen has conceived of an image that references events that happened in that specific year. For example, in Prototype 1972, three distinct places are combined to form a conglomerate landscape that charts the sites of three violent incidents that occurred across the globe during that year: a street in Londonderry, Northern Ireland, the residence of the Israeli athletes in the Olympic Village in Munich, Germany, and Route 1 near Trang Bang, Vietnam. For the past decade, Chen has been exploring the idea of invisible histories and the potential of aesthetics to convey conflict and trauma and she continues this investigation in Prototypes 1970s. What at a distance appears aesthetically charming is laden with the ominous when one takes a closer look and considers closely Chen’s references to disturbing factual events.

Accompanying images referencing atrocity, the works in Prototypes 1970s are also strategically peppered with more hopeful references from the decade in the form of counterculture symbols and proactive political figures and actions. This decade has appeal for the artist who recognizes the heightened paradox of cultural progress and innovation paired with corruption, war and horrible events. She explains:
Think “1970s” and some immediate optimistic associations come to mind: psychedelia, sexual liberation, second wave feminism, gay rights, anti-war protests, the technological birth of Apple, Microsoft, the pocket calculator and the mobile phone, and a groundbreaking cultural explosion including punk rock and performance art. But this was also the era of the Cold War, the Vietnam War, the Cambodian genocide, the Kent State massacre, the energy crisis, Watergate, the AIM stand-off, the Lebanese Civil War, the Baader-Meinhof Gang in West Germany, the Troubles in Northern Ireland, Apartheid in South Africa, the Cultural Revolution in China, Jonestown, the Love Canal disaster, the Three Mile Island disaster, etc.
The 1970s is a subject Chen has explored in past work. It is a pivotal decade for the artist, who adds, “I started the decade in a shy, pre-pubescent state of mind and emerged from it with a budding but resolute sense of political consciousness.”

Prototypes 1970s follows the tactics of re-printing and re-distribution utilized in earlier works such as The Miseries & Vengeance Wallpapers, commissioned and acquired by the Albright-Knox Art Gallery in 2013. In Prototypes 1970s, as with her past projects utilizing this strategy, Chen is using wallpaper as a vehicle for the dissemination of documented horrors and atrocity and considers the project capable of “turning history into an infinitely reproducible image file that can be printed to re-materialize into changing site-specific configurations.” As part of the exhibition, one of the prototypes has been mocked up as actual wallpaper and installed in a corner of the gallery along with 1970s era furniture provided by David Fine Home (www.davidfinehome.com).

Millie Chen’s installations, videos, and interventions are intended as sensorial experiences that prod the perceptual and ideological assumptions of the audience. Chen works in a variety of media and has exhibited across the United States, Canada, and in Mexico, Brazil, France, Germany, the Netherlands, Northern Ireland, Japan and across China. She has exhibited at the Albright-Knox Art Gallery in Buffalo, the Centre Culturel Canadien in Paris, Centro Nacional des las Artes in Mexico City, the Power Plant and the Art Gallery of Ontario in Toronto. Chen's work is in several public collections, including the Albright-Knox Art Gallery, Art Bank of Canada Council for the Arts, Canadian Pacific Railway, Roswell Park Cancer Institute, and Toronto Transit Commission, and she has produced a number of major permanent public art commissions. Chen is Professor in the Department of Art at the University at Buffalo, State University of New York. This is the second solo exhibition of Millie Chen’s at BT&C Gallery.

ABOUT BT&C GALLERY
Established in 2013, BT&C Gallery is a commercial art gallery that builds the career of artists based in Buffalo and beyond, and fosters a base of emerging and seasoned collectors. BT&C opened at 1250 Niagara St, Buffalo in June 2014.

BT&C is open Fridays 12-7pm and select Saturdays 12-4pm (during exhibition), as well as anytime by appointment.