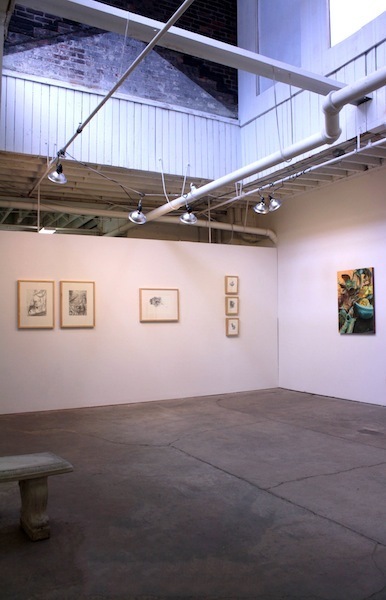 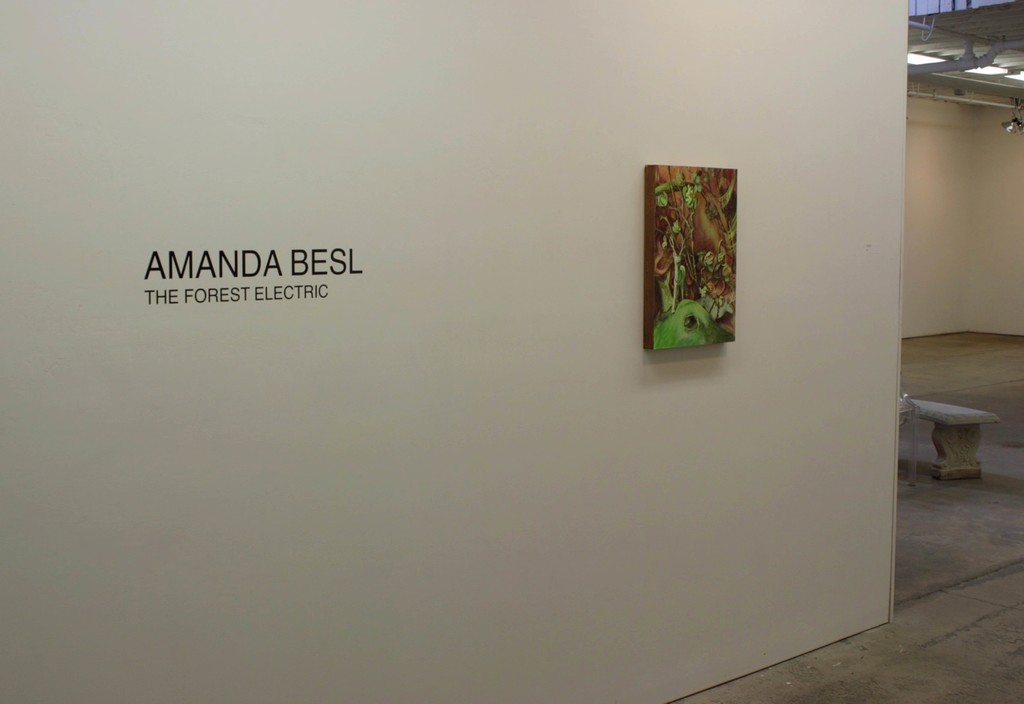 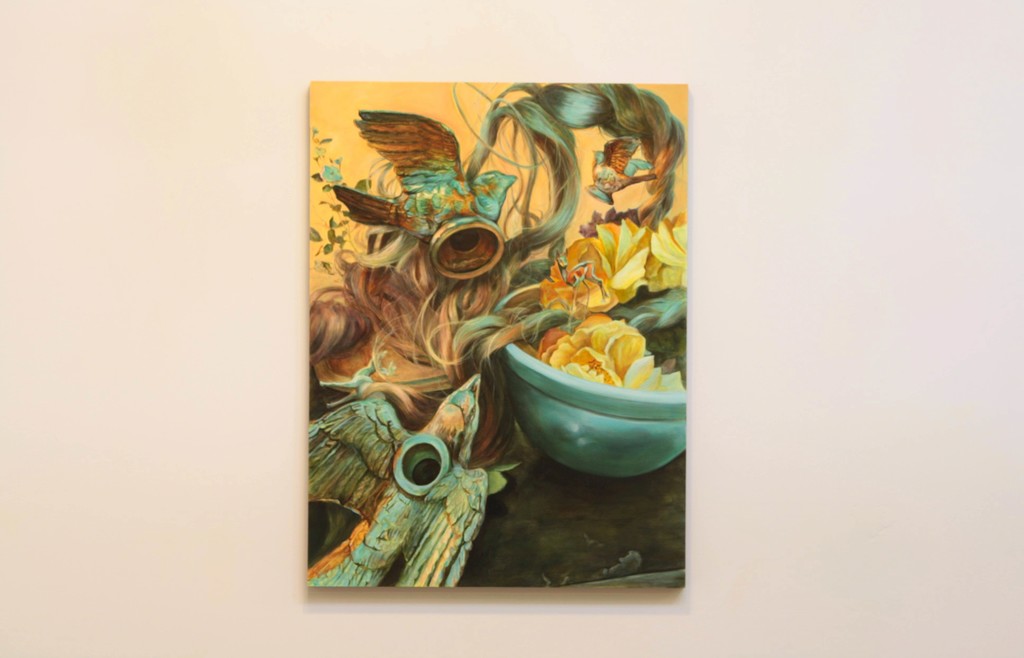 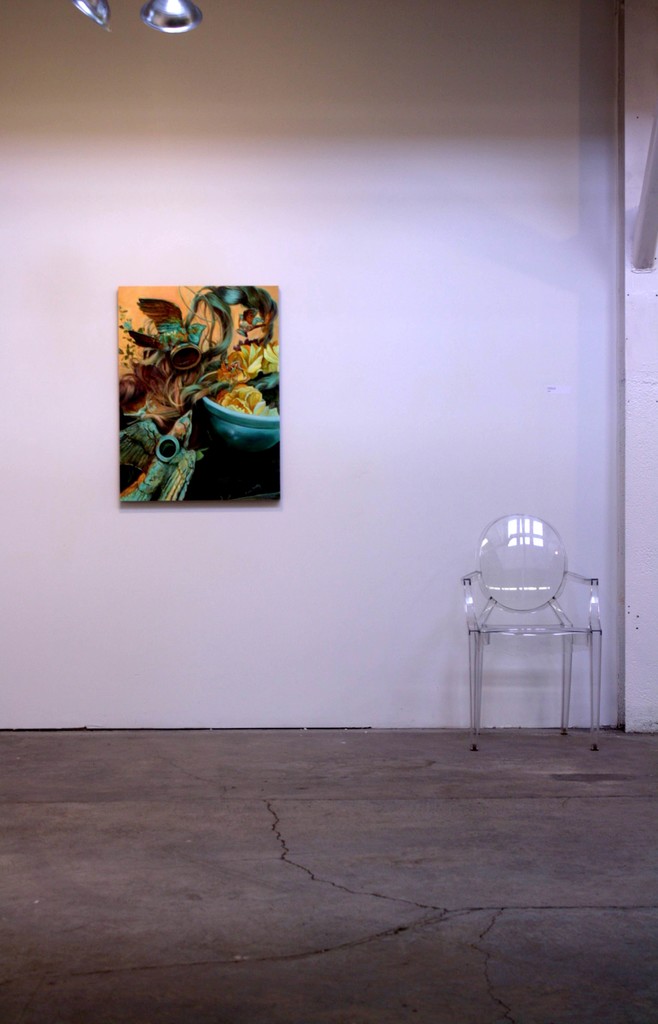 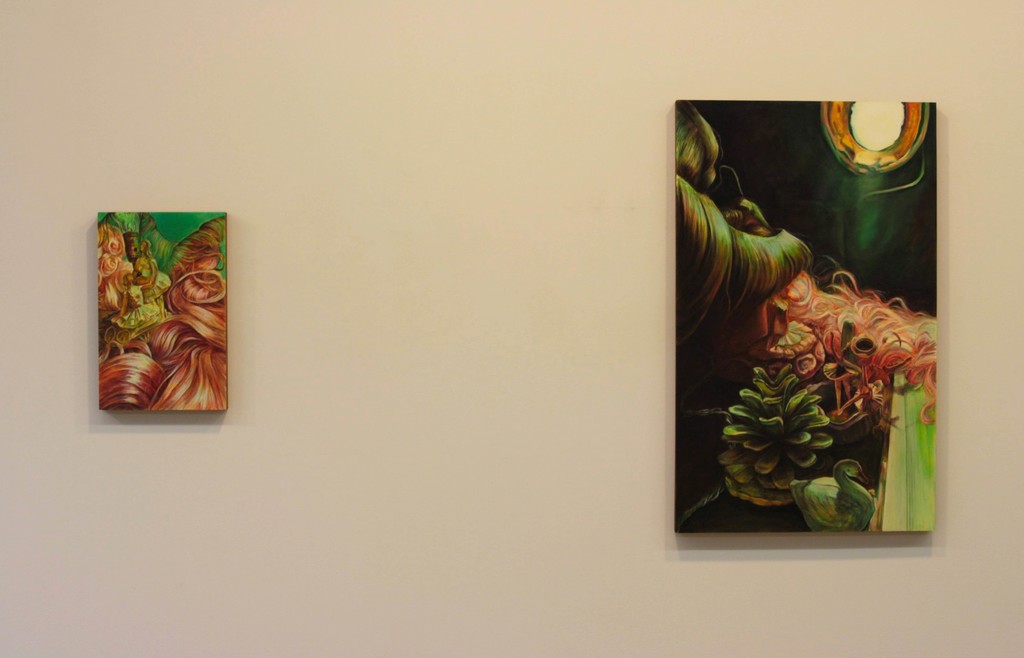 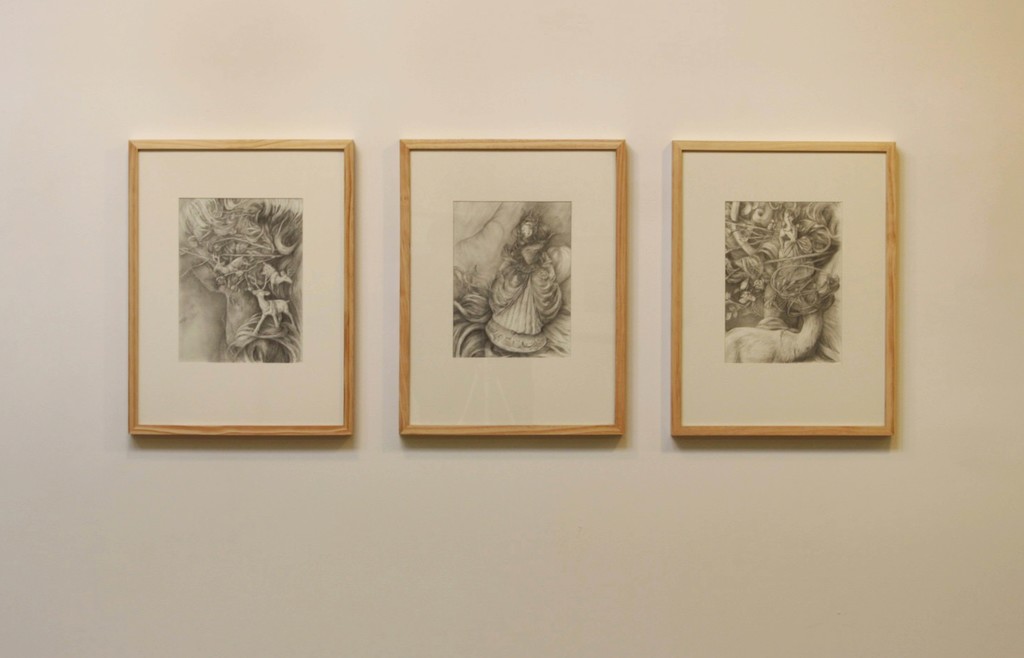 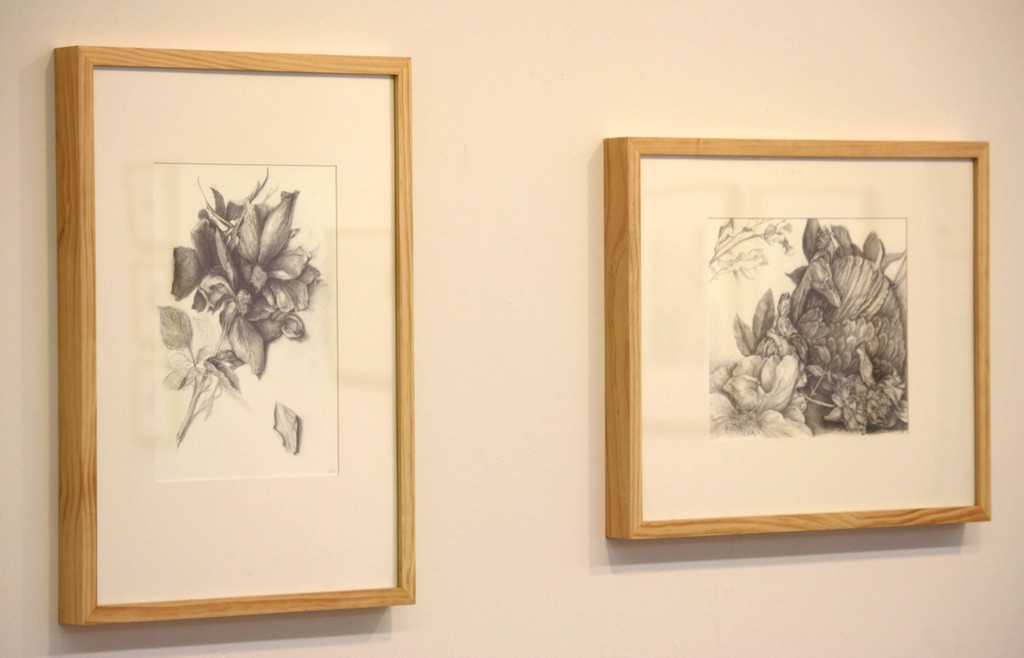 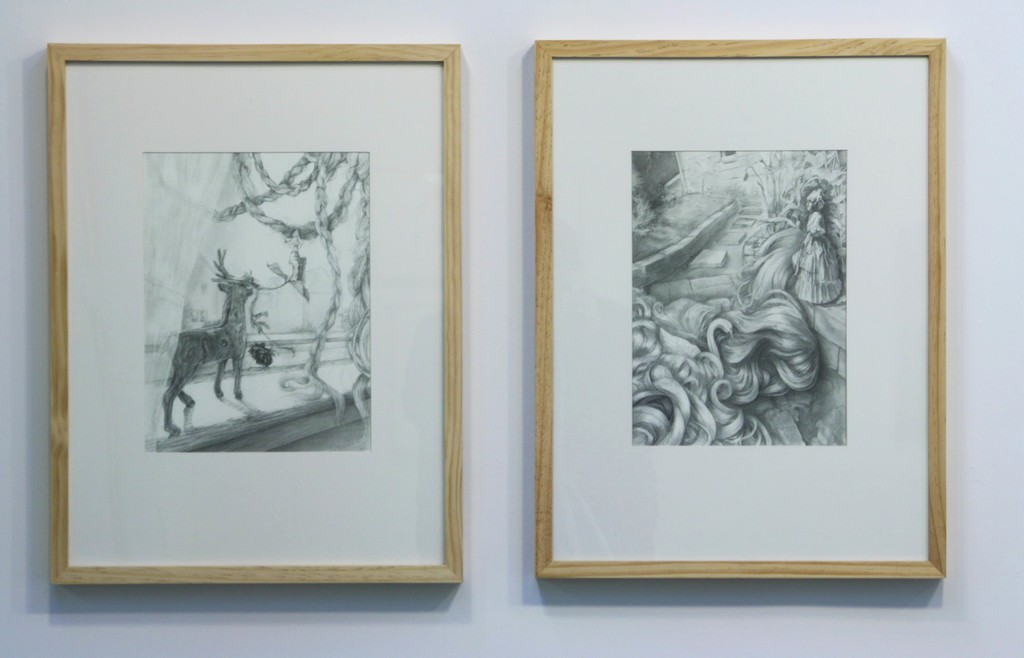 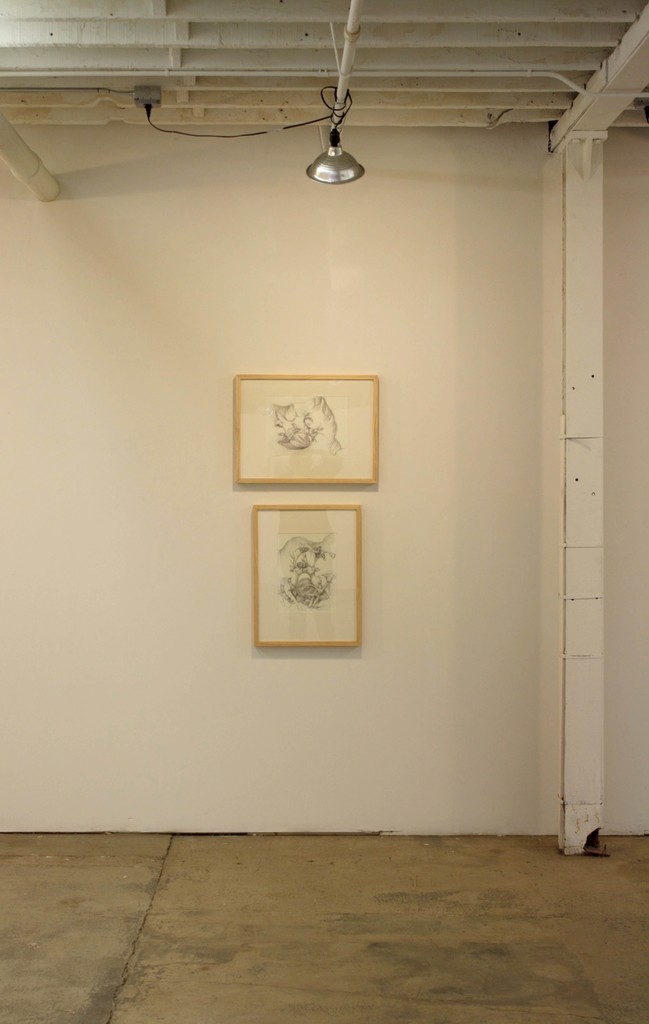 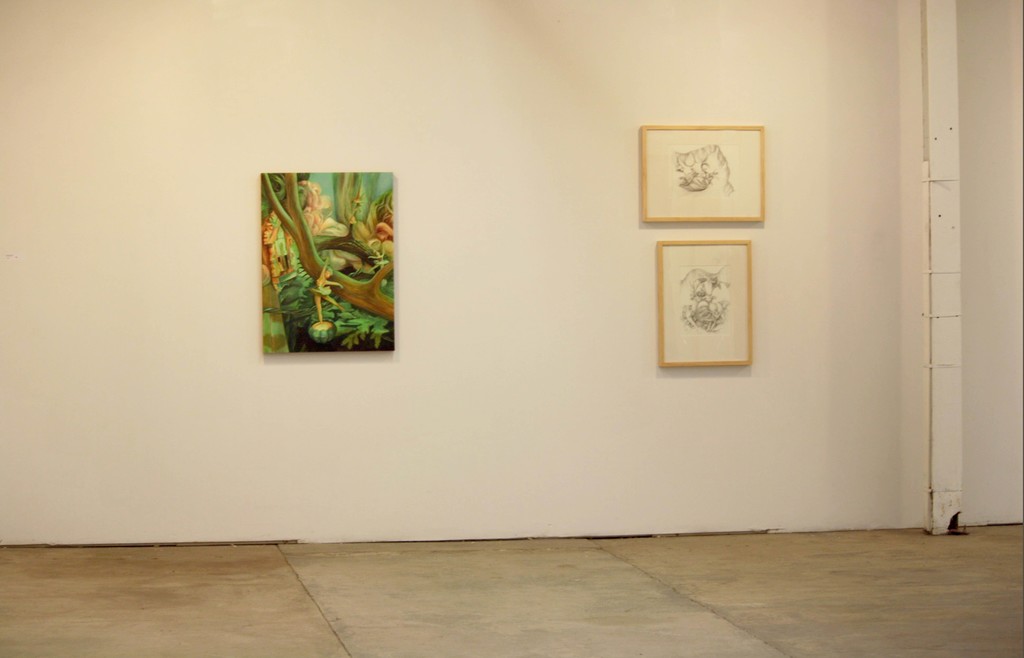 For her second solo exhibition at BT&C Gallery, Amanda Besl presents new paintings and drawings— a series of meticulously executed, psychological still lifes. The opening reception, which is free and open to the public, will take place on Friday, October 23rd from 6-9pm. The exhibition will remain on view through November 27th.

In this latest body of work, Besl expands on her language of contemporary surrealism; Besl’s imagery involves objects, many of which are familiar to a point, but with details that confuse— vintage cupcake toppers in the shape of ballerinas and plastic deer dominate the scenes of these latest pictures. Like her past works in this vein, these objects are often situated amidst a sea of tangles of hair, both human and artificial—pink locks that resemble cotton candy. Besl’s palette is masterful and inspired, in part, by the saturated Technicolor scenes of the 1948 surrealist/fantasy ballet film, The Red Shoes. Like a stage set, the paintings are lit from within with a pointed and colored light and like a drama, a narrative scene at once playful and melancholy unfolds before your eyes.

Included in the exhibition, alongside her oil paintings, are intricate works on paper. Besl’s latest drawings are more vivid than ever before and offer up narrative suggestions as complex as those in her paintings. The relationship between the two bodies of work hints at a much larger narrative—an entire world that Besl has constructed. The artist explains that her graphite drawings “ground the paintings with a feeling of documentation, backing up the scenarios with suggestions of truth.” It is as if the shared imagery is more real through the immediacy of the medium of graphite on paper and one is able to see a little more clearly without the threat of being led astray by the distractions of the paintings (i.e. the seductive palette and glossy surfaces).

Besl explains the body of work in The Forest Electric:
Through my work I explore still life as a psychological constructed environment eluding to the pre-Revolutionary French court whose allegories, fairytales of inevitable adult situations, are relegated to childhood niceties. In my oil paintings a candy-colored palette lingers, casting an acidic neon pale over a constructed still life world. Seemingly languid landscapes of wigs and hairpieces threaten to topple and ensnare. They are populated by classical references: deer, swans, ballerinas and young women dressed more for a ballroom than for woodland adventure. Electric cords and distant interiors haunt this realm and betray its origin. My intention is for the viewer to be taken in by a beautiful visual turn of phrase that you slowly realize is actually a little sad or frightening or disturbing upon self-reflection. And then maybe, hopefully, to have that image haunt you just a little.

Besl has shown widely in both Western New York and New York City, and in Belgium, France, the Netherlands, and Russia. Besl holds an MFA in Painting from the Cranbrook Academy of Art, Bloomfield Hills, MI and a BFA from SUNY Oswego. Her painting is part of several notable private and public collections including the Burchfield Penney Art Center; Nichido Contemporary, Tokyo, Japan; the Burger Collection, Hong Kong and the Tullman Collection, Chicago.