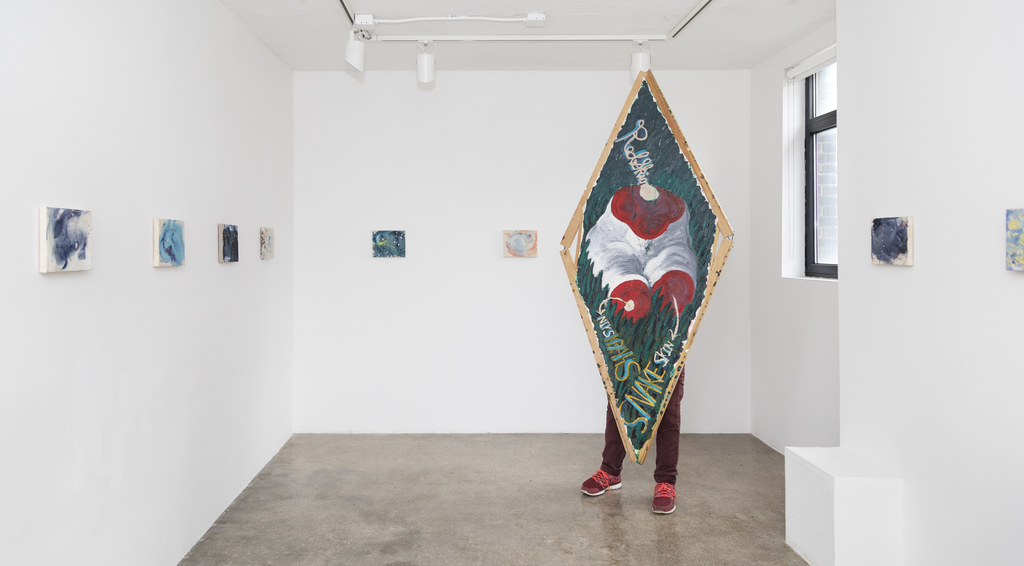 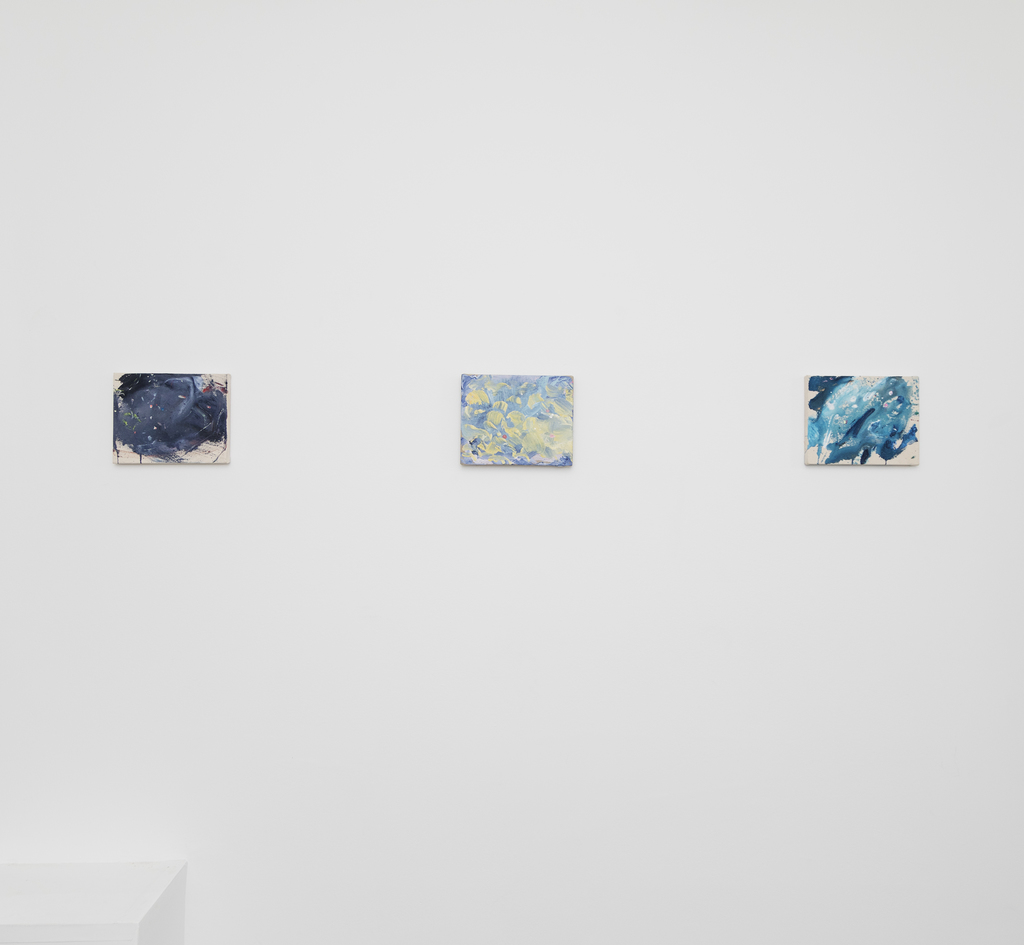 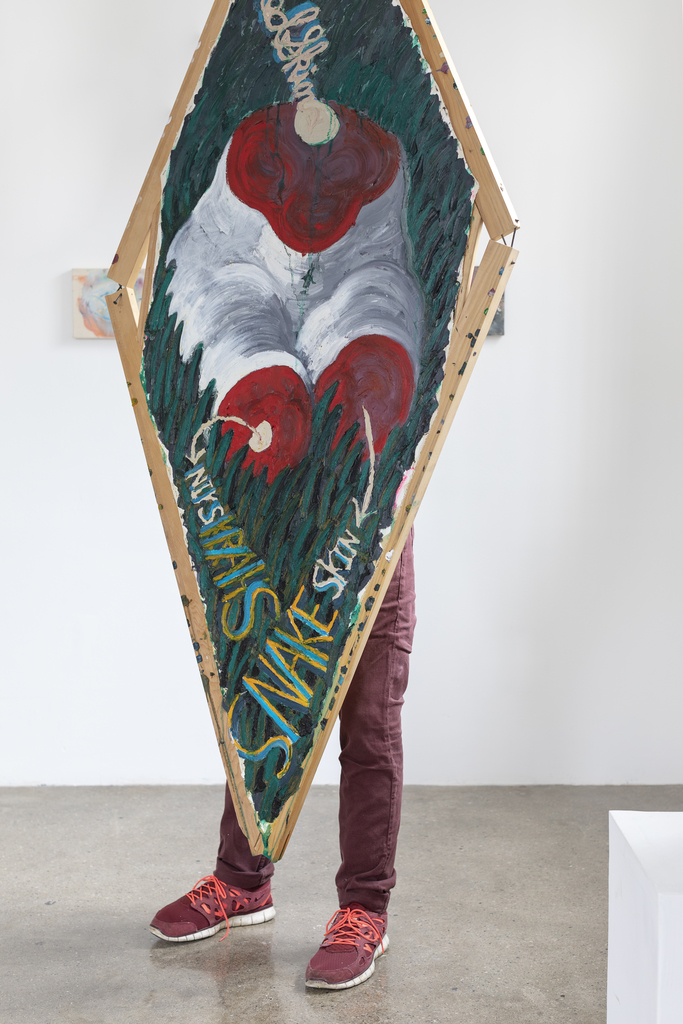 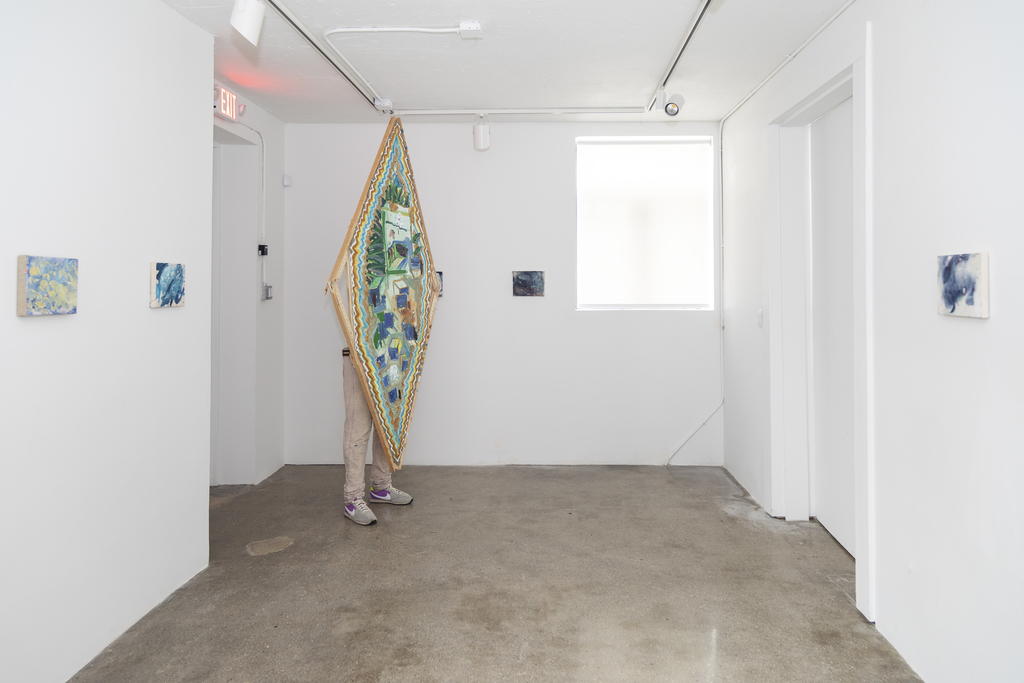 Reyes | Finn is pleased to announce a debut solo exhibition by artist Nick Doyle accompanied by a two-person exhibition by Mike Cloud and John Riepenhoff, on view from January 10–February 22, 2020. Examining various modes of production—from the mass production of quotidian objects emblematic of the American Dream, to the production of art—both exhibitions bring to the fore standards of worth, exposing unseen systems of social mobility and support.

Occupying the main gallery space, Nick Doyle will present Paved Paradise, the artist’s latest investigation into American iconography and masculine idealism. Doyle uses the road trip—a pillar of American mythology—as a point of entry to his work in order to question the persistence of Rugged Individualism as the fabric of our national identity. Through a series of mechanical miniatures, theatrical scenery, and satirical prop-like denim works, the artist foregrounds the dangers of nostalgia and our evolving relationship to consumerism. Paved Paradise marks Doyle’s first solo exhibition in Reyes | Finn’s Detroit gallery space, following solo presentations with the gallery for Condo New York 2019 and NADA Miami 2019.

The side gallery will feature Mike Cloud & John Riepenhoff, a collaborative installation comprising paintings by Cloud installed within Riepenhoff’s ongoing sculpture series entitled Handler. In Handler, Riepenhoff employs papier-mâché legs—outfitted in the artist’s pants and shoes—as easels for other artists’ paintings, in turn becoming literal and metaphorical support structures for the artists. For Riepenhoff, the figurative sculptures are portraits of the unseen support of art handlers, gallerists, patrons, friends, family, and colleagues. By using sculpture as a platform to promote and reframe other artwork, the artist exposes the unseen support systems within the artworld, critically refocusing the values of production and authorship.

For Riepenhoff’s latest iteration of his sculptural exhibition platform, his disembodied legs hold paintings by artist Mike Cloud. Known for creating playful-yet-political paintings on shaped canvases, Cloud blends geometrical abstraction, gestural mark-making, iconography, text, and portraiture in order to address various codes in the art world, such as the respective roles of viewer and subject, and how images are presented and received. By use of inclusion and omission, Cloud attempts to interrogate Western thought and power dynamics, and gives power and agency to an image by abstracting it from it’s most recognised environment. For his collaboration with Riepenhoff, the artist displays two diamond-shaped paintings—one depicts a dismembered neoclassical marble statue, challenging Western beauty standards, while the other presents the viewer with a geometrically abstract field of cubes. Jointly, the artists present the viewer with conflicting narratives, figures, and forms, interrogating the image by testing its limits and potential through context.

ABOUT MIKE CLOUD
Mike Cloud is a painter living and working in Chicago, IL. He earned his M.F.A. from Yale University School of Art and his B.F.A. from the University of Illinois-Chicago. His work has been exhibited nationally and internationally at P.S.1, NY; the Studio Museum in Harlem, NY; Danubiana Meulensteen Art Museum, Slovak Republic; Honor Fraser Gallery, CA; Thomas Erben Gallery, NY; Good Children Gallery, LA; Marianne Boesky Gallery, NY; White Columns, NY; Max Protetch, NY; Apexart, NYC. Cloud has been reviewed in the New York Times, Art in America, Art Review and featured in the publication Painting Abstraction by Bob Nickas, published by Phaidon Press. His awards include the inaugural Chiaro Award from the Headlands Center for the Arts, the Barry Schactman Prize in Painting from the Yale University School of Art as well as the Grace Holt Memorial Award in African American Issues from the University of Illinois, Chicago. His work is held in private and public collections including The Bronx Museum (New York, NY), Lincoln Center (New York, NY) and the Metropolitan Museum of Art (New York, NY). Cloud has lectured extensively on his work and contemporary theoretical art issues at the Mason Gross School of the Arts at Rutgers University, Yale University, Cooper Union, Bard College, Kansas City Art Institute and the University of New Orleans. He is currently an associate professor in the Painting and Drawing department at the School of the Art Institute of Chicago.

ABOUT JOHN RIEPENHOFF
John Riepenhoff was born in 1982 in Milwaukee, WI where he currently lives. He received a BFA from the Peck School of the Arts at the University of Wisconsin, Milwaukee, and is represented by Marlborough (New York and London). Riepenhoff is also a curator and co-owner of The Green Gallery in Milwaukee, WI, collaborator at The Open, co-organizer of Milwaukee International and Dark Fairs, inventor of artistic platforms for the expression of others, and regular food ideator. His recent exhibitions and curatorial projects have been presented at the Whitney Museum of American Art, Marlborough Chelsea, and Swiss Institute New York, NY; Tate Modern, London; Crystal Bridges, Bentonville, AR; 356 Mission Rd, Los Angeles, CA; Poor Farm, WI; Lynden Sculpture Garden, Inova, and The Suburban, Milwaukee, WI; Minneapolis Institute of Art, MN; and Atlanta Contemporary Art Center, GA. He also continues a program, the John Riepenhoff Experience, at various locations around the world, most recently at Night Gallery, Los Angeles, CA and Misako and Rosen, Tokyo. He was the 2015 Milwaukee Arts Board Artist of the Year, founded Milwaukee’s first Beer Endowment for artist-run organizations, co-chairs Friends of Blue Dress Park, runs The Oven at The Open in Milwaukee, and sits on the board of Riverwest Radio.

ABOUT REYES | FINN
Reyes | Finn is a contemporary art gallery in Detroit, MI, established in 2017. Reyes | Finn reveals multiple exhibitions a year dedicated to emerging and mid-career artists. It is with such presentations that the gallery seeks to reveal a profile both internationally renowned and regional in dialogue. Collaborating with artists, patrons and institutions alike, the gallery hopes to continue to diversify and strengthen Detroit’s arts community.