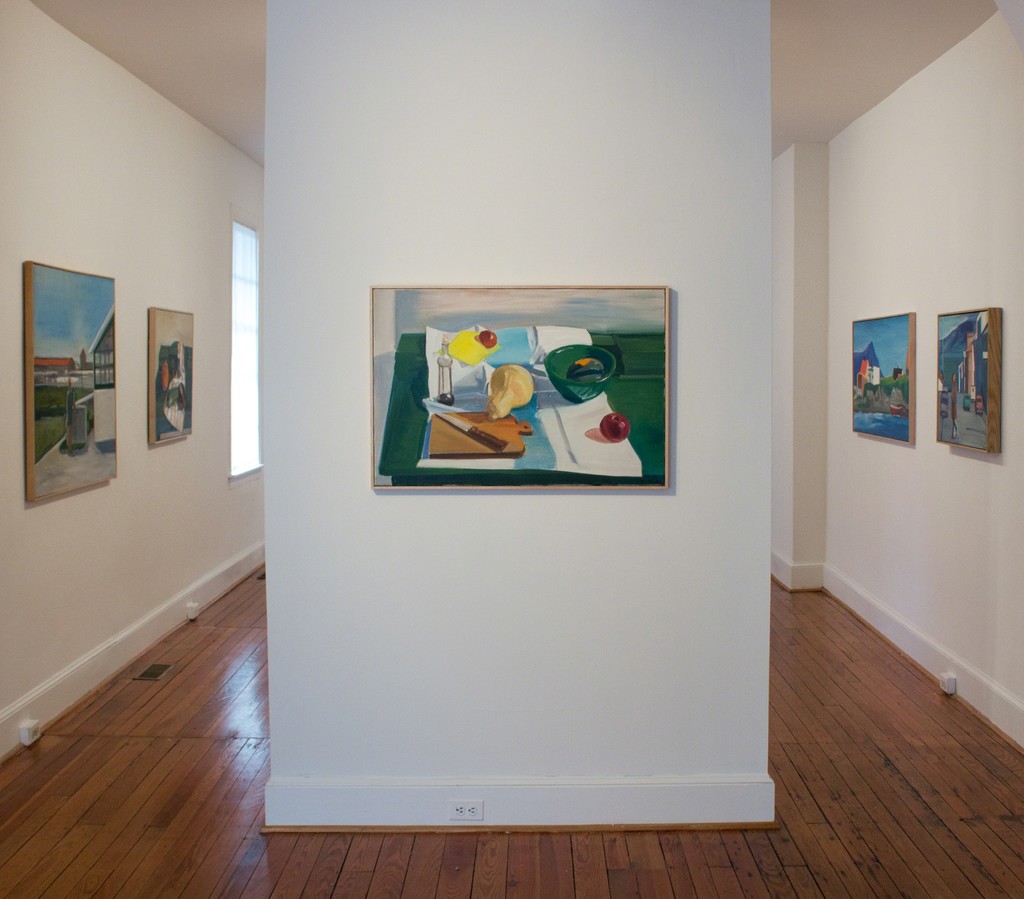 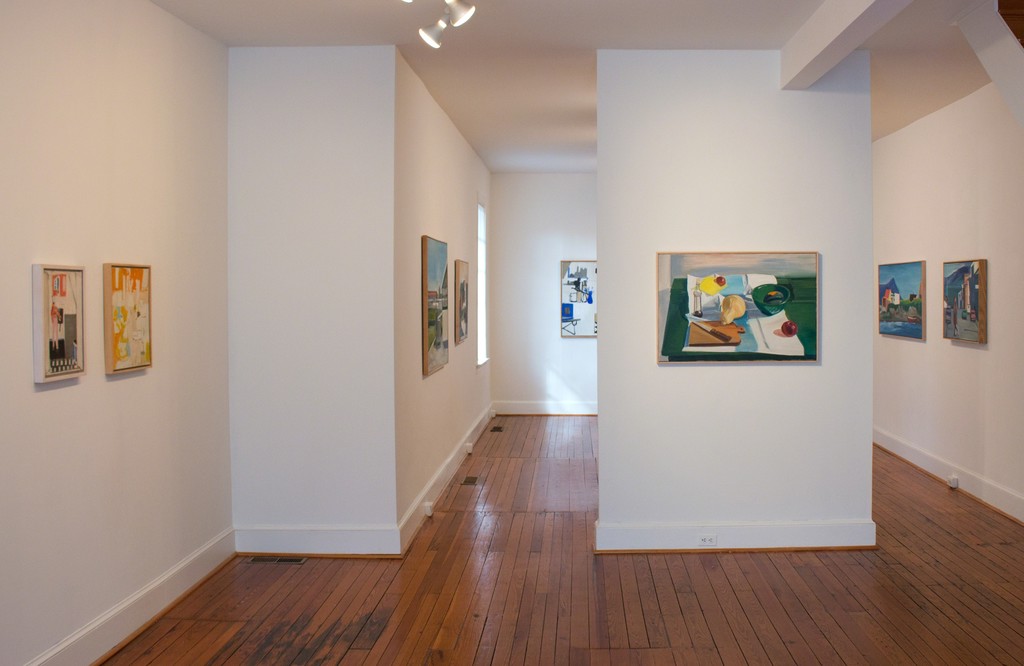 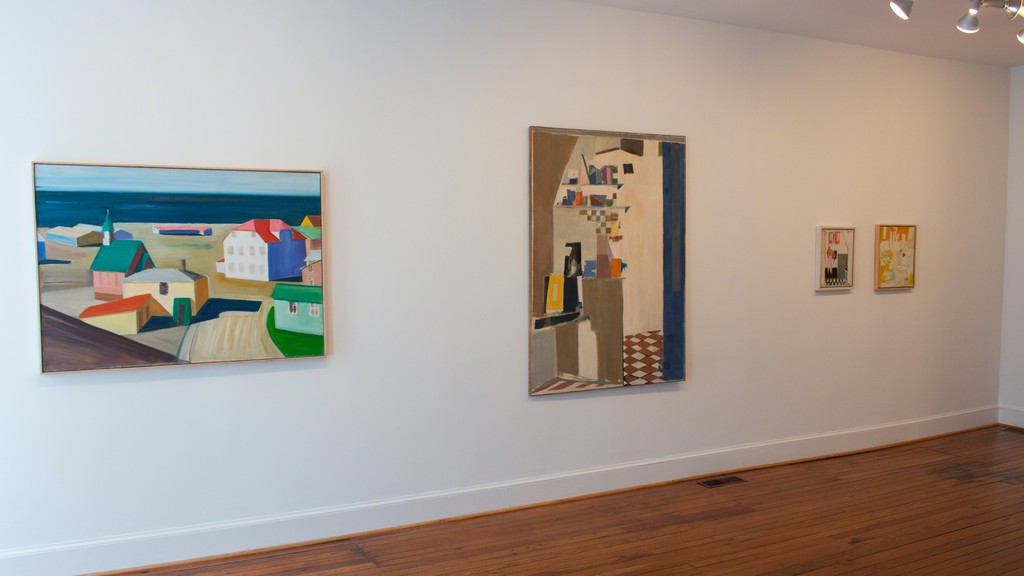 In conjunction with Nell Blaine’s solo exhibition, Reynolds Gallery is pleased to announce an exhibition of paintings by leading contemporary female artists Biala and Louisa Matthiasdottir. The show opens with a reception on Friday, September 15 from 7 - 9 pm and continues through October 27, 2017. This show commemorates pioneers of 20th century art, as both women attributed to the burgeoning contemporary art scene across Europe and the U.S. Originating from Poland and Iceland, they were unified by their Abstract Expressionist style, a keen eye, and fluid interpretation. Biala and Matthiasdottir captured rolling hills, floral bouquets, or a tile floor through simple brushwork and harmonious colors, imparting a sense of security and candor in the post-war age.

Biala’s oil paintings are quiet in nature. Her muted palette casts an intimate light on each scene, as if aged by the sun. The unassuming softness radiating from painted figures and flowers contrasts her intense spatial development. Intersecting forms challenge perspective and dimension as Biala breaks down objects and rooms into varied colorful shapes. Wide blocks of blue or faded tan interrupt painted details of bottles, creating a suspended environment. This geometric tension echoes ideas of Cubism, while her rough brushwork reflects elements of Abstract Expressionism and French Modernism. These overlapping artistic movements parallel Biala’s many surroundings, as she was born in Poland and later split her time between New York and France, incorporating into her work both American and European influences.

Louisa Matthiasdottir translates memories of growing up in Reykjavik, Iceland, through richly painted representational paintings. She carves out space with her brush, creating dimension through heightened color relations and wide strokes. Crisp bands of vermillion green and cherry red suggest light in their deep saturation, outlining the bend in a river, or the angle of a house’s roof. Matthiasdottir captures a permanence within domestic and mountainous scenes, conveying her passion for and confidence in Icelandic landscapes. Although she applied several thick layers of paint—often removing and re-applying—she maintained a simplicity within the subject. Horses, sheep, houses, and figures exist individually as one- or two-toned entities, removing any prospect of an overworked composition. A strange, charming quietness permeates throughout, further transporting the viewer to the awe and intangibility of an Icelandic mountainscape.

Matthiasdottir was born in Reykjavik in 1917. As a young woman, she studied art in Copenhagen and Paris, and moved to New York in 1942 to study with the well-renowned abstract expressionist Hans Hofmann. In 1948, the Jane Street Gallery held Matthiasdottir’s first solo show in New York. From that time until her death in 2000, she mounted major exhibitions, including solo shows at The Studio School, New York; American University, Washington, DC; Nordic Heritage Museum, Seattle, WA; Maier Museum of Art in Lynchburg, VA; and The Reykjavik Municipal Art Museum, Iceland. Her paintings have also been included in group exhibitions at the Arkansas Art Center, Little Rock, AR; Pennsylvania Academy of Fine Arts, Philadelphia, PA; Art Institute of Chicago, IL; Virginia Museum of Fine Arts, Richmond, VA; and The National Academy Museum, New York, NY, among many others. Additionally, she was curated into the Whitney Museum of American Art Biennial Exhibition in 1973. Notable collections include the Tate Gallery, London; The National Gallery of Iceland, Reykjavik; The Art Institute of Chicago, IL; The Hirshhorn Museum and Sculpture Garden and The National Museum of Women in the Arts, both, Washington, DC.