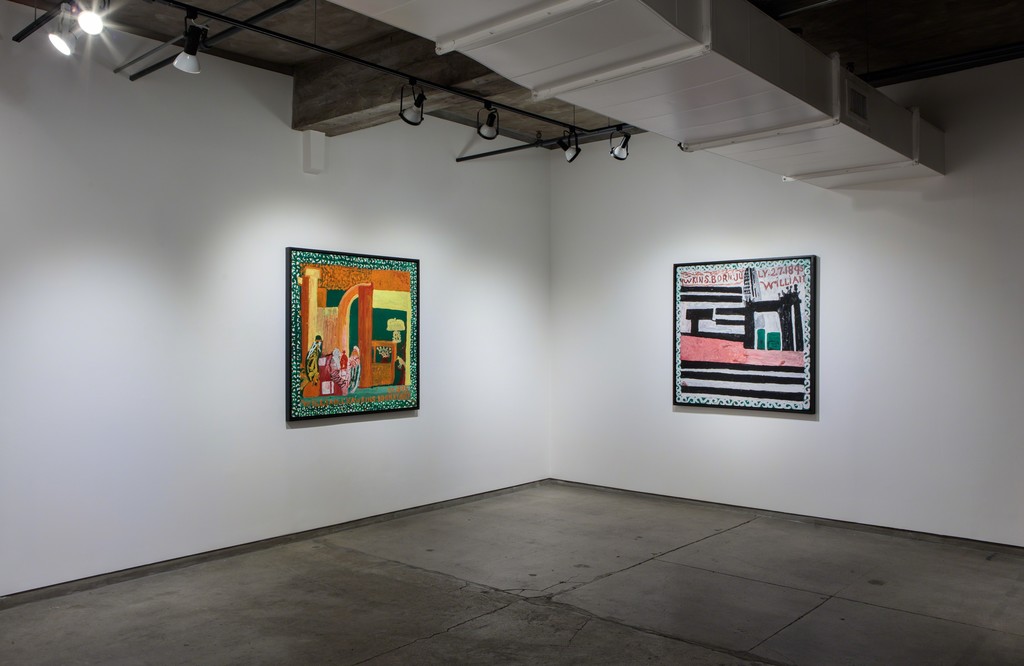 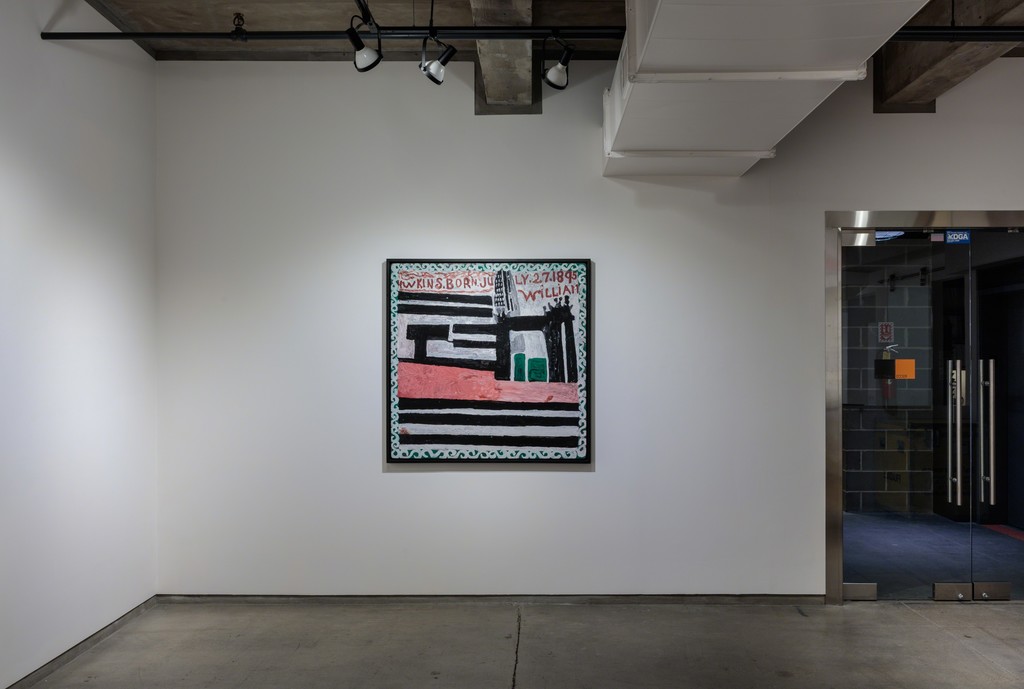 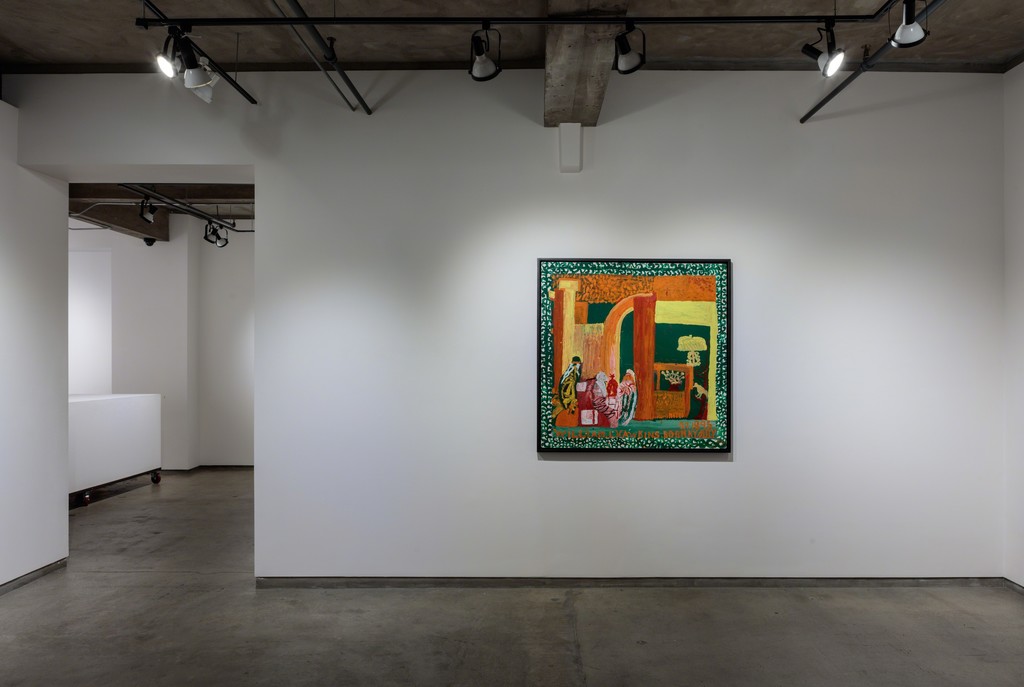 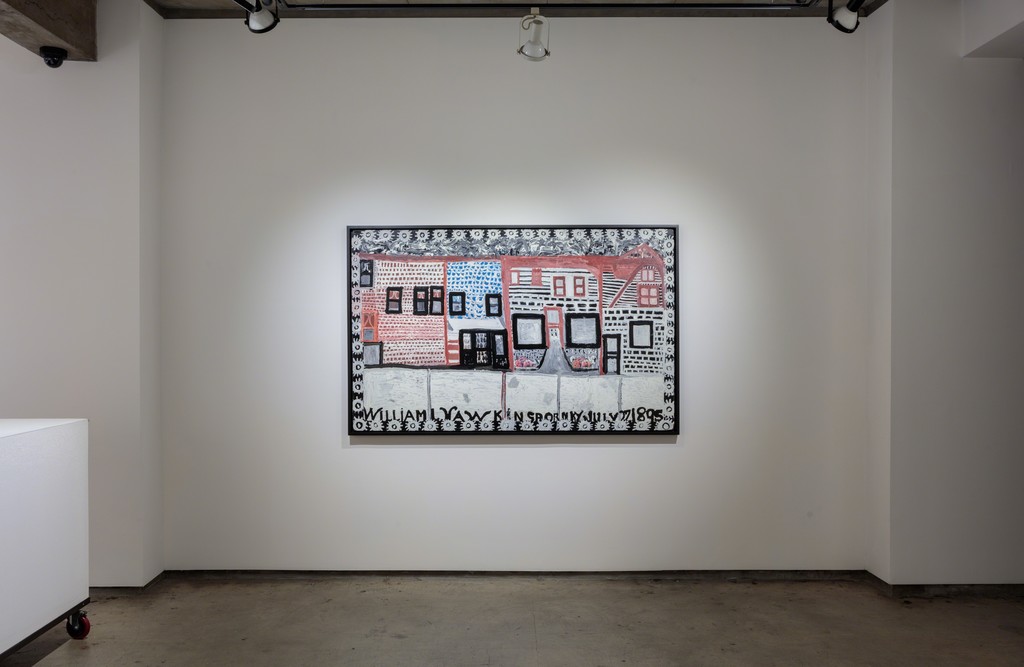 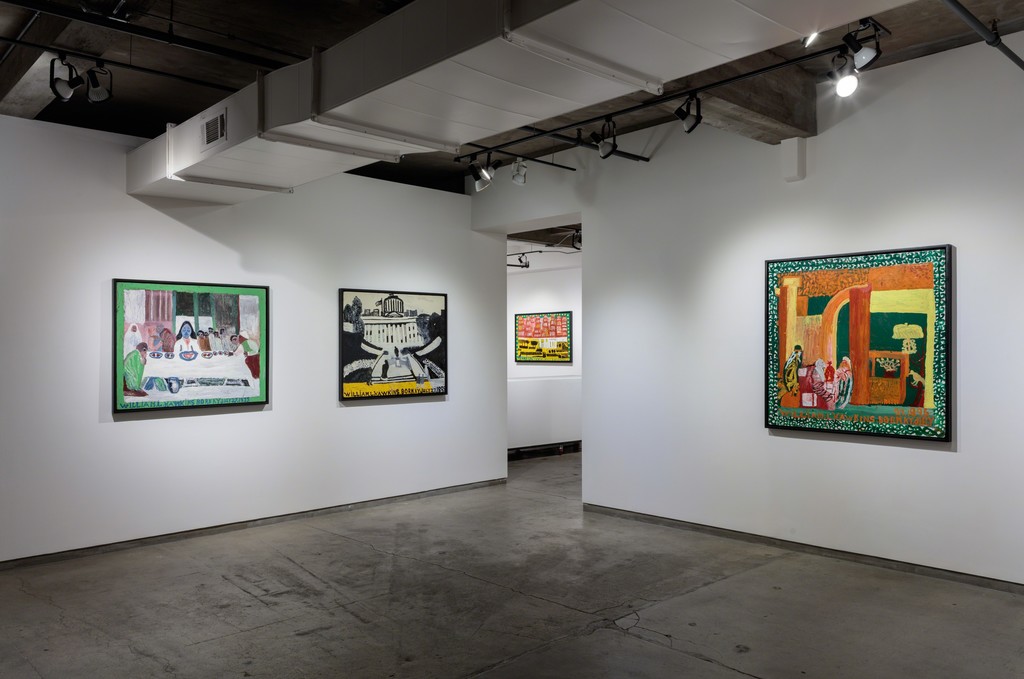 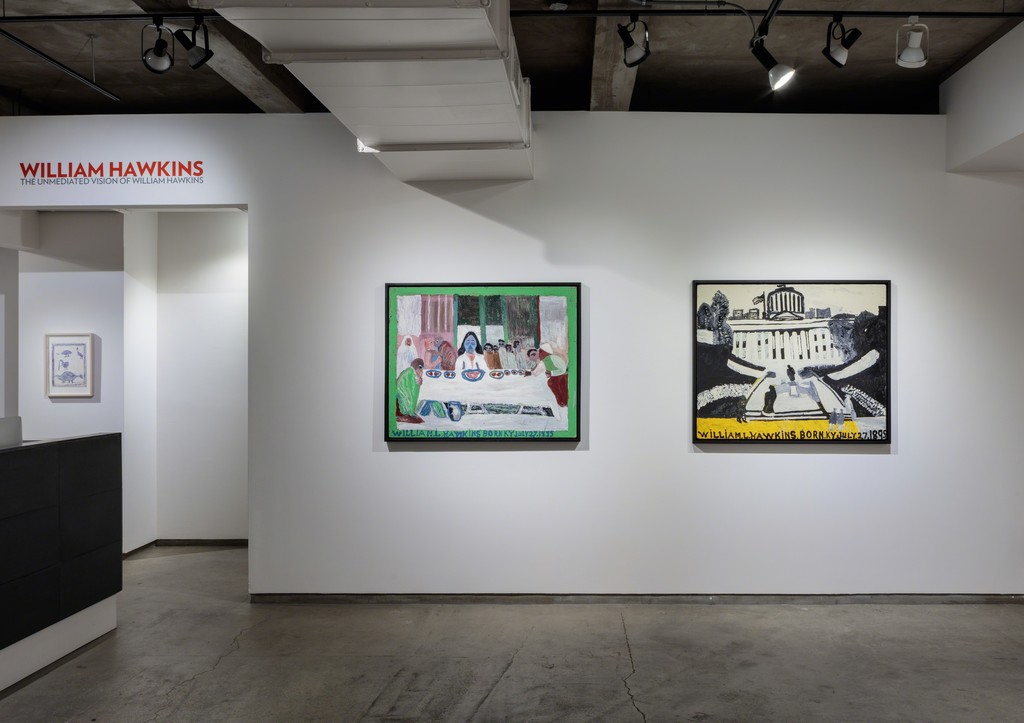 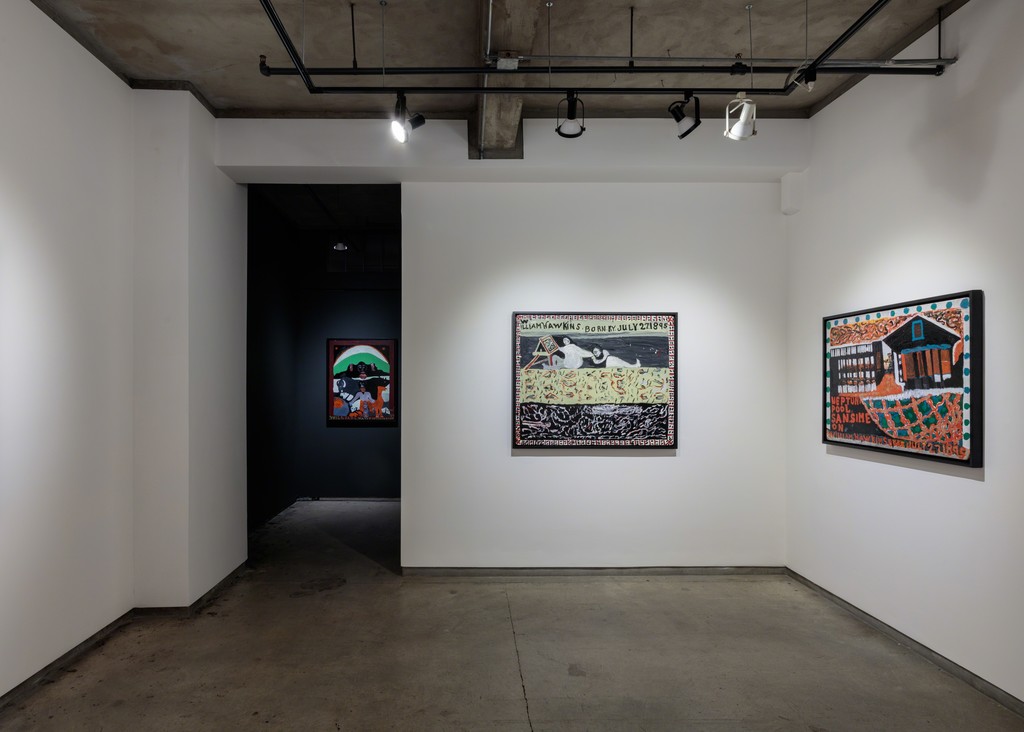 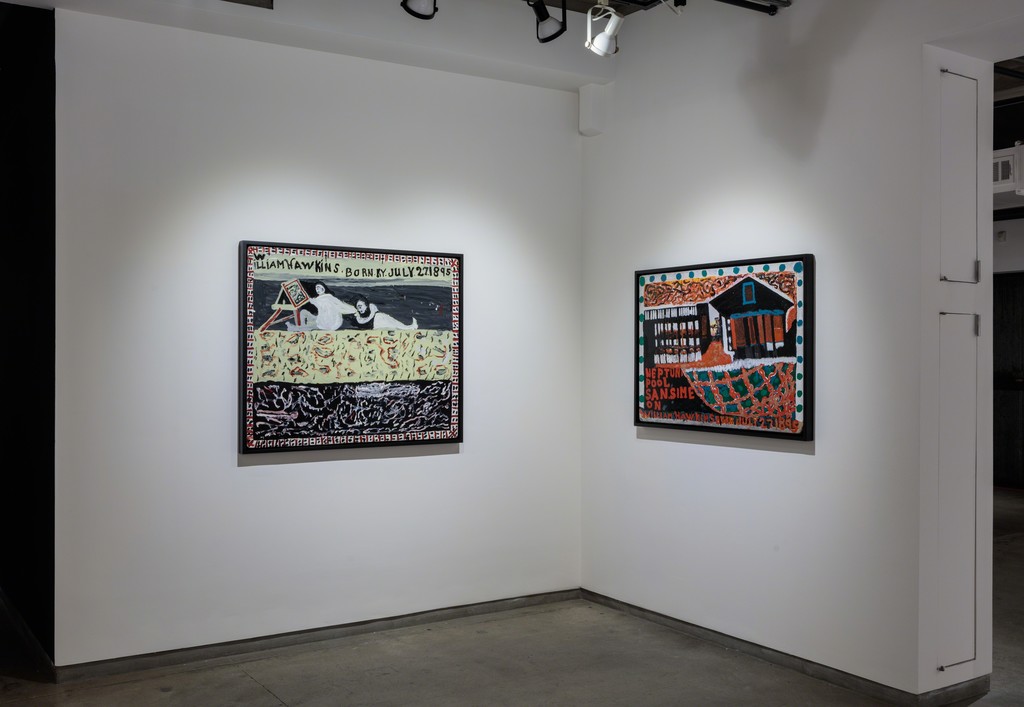 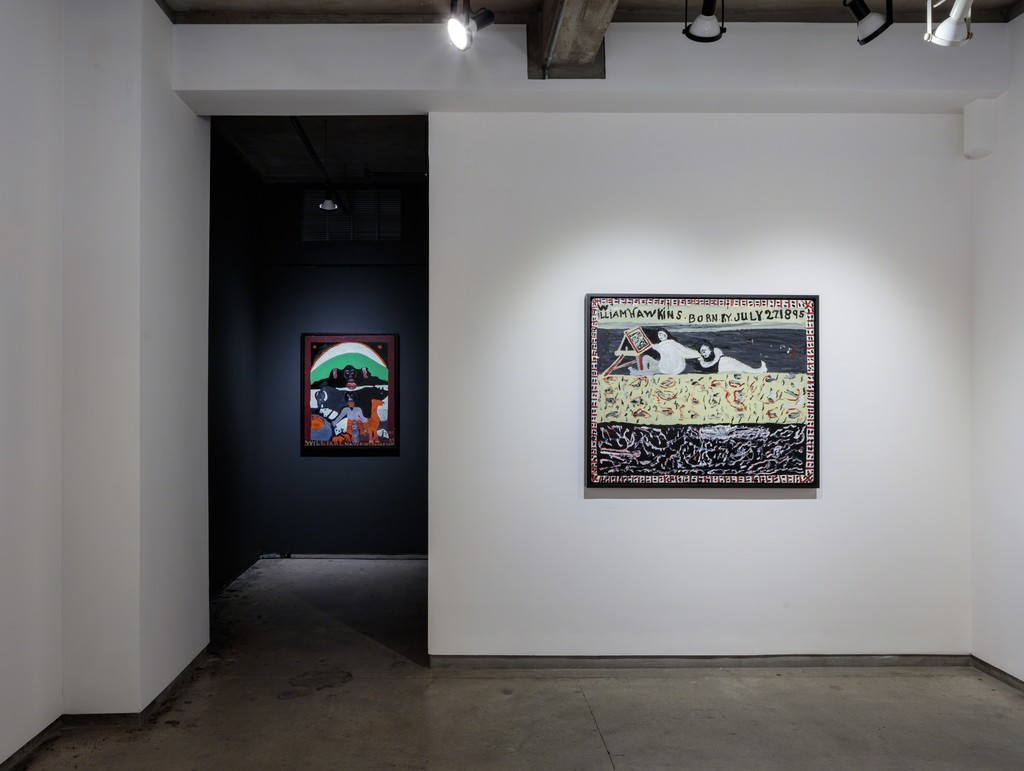 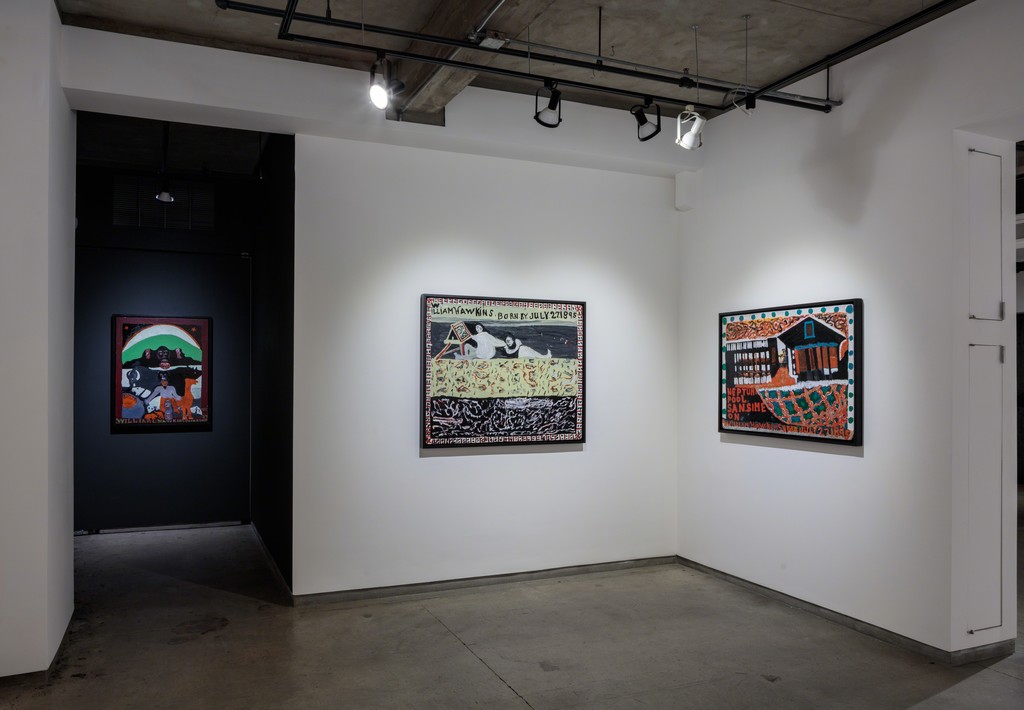 Paintings that seem to have painted themselves: this is what William Hawkins has created. They
are unmediated. What has caused such inhibition?

Matt (Matthew) Arnett, the son of the legendary William S. Arnett (founder of Souls Grown
Deep Foundation) and my old friend Chris Martin paid a surprise visit to the Brooklyn Rail’s former
headquarters in Greenpoint, Brooklyn one afternoon in late April 2006. Our conversation centered on
the issue of the survival of folklore (songs, dances, stories, and good times after hard days at work) from
early American slavery through the present, by way of oral tradition. The transmission of these stories
happened through music, especially Folk Blues and Delta Blues as well as object-making, painting,
sculpture, assemblage, and quilts, with the sine qua non of subversion always in aim.

At this time in our lives Chris and I were heavily invested in searching for the equilibrium
between the “self” and the “non-self”—the Middle Way, as it’s known in Buddhism—to transcend and
reconcile a duality that characterizes extremes of sensual indulgence and self-mortification. This search
brought us to the arts and music from the vernacular tradition of the rural south, stretching from
Virginia to East Texas. My admiration for Delta Blues masters, for example, Charley Patton, Son House,
Robert Johnson, Bukka White, and Skip James, just to name a few, corresponded accordingly to Chris’s
reverence for Bill Traylor, Thornton Dial, Lonney Holley, Purvis Young, and especially William
Hawkins. As Chris wrote in 1987, “I want to make painting out of spiritual energy … Any form is
possible if it arises out of inner necessity.” That same afternoon, I remember we discussed an untitled
1964 painting by Bob Thompson that had appeared on the cover of the Brooklyn Rail’s April issue. Two
female figures in profile were painted as one bright yellow silhouette and below their feet, gradually
moving from the foreground to the background, were four frontal ghost/angel-like images (the constant
polarity of good and evil was of particular interest to Thompson). In this piece we noted and treasured
Thompson’s distinct ability to harmonize his love of Baroque and Renaissance masterpieces with
Abstract Expressionism and Jazz, fluidly, and without hierarchy.

Ten years later, in mid-September 2016, the spirit of Bob Thompson was resurrected in my
mind when I encountered a William Hawkins painting The Judgment on a visit to my new friend Frank
Maresca’s home. Thompson and Hawkins shared a treatment of flattened form, and the presentation of
frontal, three-quarter, and profile views to generate compositional rhythm. These space-making ploys
indicated an unusual up-front and equalizing investment in the creation of one’s own “self” and “nonself.”
In other words, the copying of a standardized religious image is a self-aware choice, yet the
subjective manipulations and oddities of portrayal are the non-self, because they derive from the
subconscious. As the great scholar D.T. Suzuki noted, “[t]he person is free only when he is not a
person…[H]e is free when he is himself and yet not himself.” Whatever different ways Thompson and
Hawkins were able to become conduits for the past and present infusing into one condition of time,
what is clear is that they shared a desire for painting to be elemental matter, and singular. Thompson
and Hawkins also shared—apart from a birthplace in Kentucky (Thompson in Louisville, Hawkins in
the rolling hills)—the urgency to create a large volume of paintings during relatively short artistic
working lives. Thompson, born 1937, didn’t arrive to his full maturity until the last six years before his
death at the age of 29 in 1966; Hawkins, born 1895, began painting only in the last fifteen years of his
life, in 1975.

Simultaneously, significant differences between these two artists of disparate generations come
to mind: Thompson was briefly a pre-med student at Boston University before his study with the
German Expressionist Ulfert Wilke at the University of Louisville; as soon as he moved to New York
City in 1958, barely 21 years of age, he joined the artistic and bohemian circles that included Charlie Haden, Ornette Coleman, Meyer Schapiro, Allan Ginsburg, Red Grooms, Mimi Gross, Allan Kaprow, and Jan Müller. Quite the opposite was Hawkins, who had lived a full life that was packed with drama and poverty; he had worked in a steel casting company, served in the army in World War I, married and divorced, ran a few brothels, and drove a truck until well into his 80s, before discovering his true vocation.

Hawkins’s vast life experiences were channeled through his determined, or perhaps
unthinkingly automatic use of one brush for all-purposes in every painting he made. Unlike
Thompson’s measured and deliberate creation of shapes that required various brushes to accentuate the
differences of texture and size from one to another, Hawkins’s dexterous use of the single brush is a
most astonishing display of draftsmanship. He always remained in control of the repertoire of his
painterly vocabulary: from doodling, swiveling, to blotting, stumbling, dragging, and filling a large
shape with such subtle degrees of pressure; he responded to drying times, variant lusters (always
enamel paint), and support surfaces (Masonite, plywood, paper, etc.) collected during his habitual
walks on the streets of Columbus, Ohio (the city where he ended up). Hawkins’s idiosyncratic handling
couldn’t be taught nor trained precisely because it arose out of necessity. And here is why the paintings
appear to have painted themselves.

Hawkins’s subject matters were bewilderingly indiscriminating. He painted wild animals such as
Tasmanian tigers, buffalo, moose; people of different persuasions like acrobats, Charlie Chaplin; all
sorts of events, including those from fantasy and popular culture, for example, a jousting knight, or
landing on the moon; he adored all types of buildings: landmarks, industrial, theatres, houses, cabins;
he found great delight in serializing religious tableaux, especially the Last Supper. Hawkins was likewise
intrigued with endless representations of painted frames; almost all his paintings function as both a
window from which a viewer looks in and an extended environment of image, particularly when the
emphatic transcription of his name and birthday (July 27, 1895) is incorporated. It seems in every
painting he made, as William S. Arnett perceptively observed, “[Hawkins] loved to turn up the volume
of color in his work, to saturate the world of his art with stronger impressions than those otherwise
encountered in mundane existence.”

I distinctly remember walking away from concurrent Hawkins exhibitions at the Museum of
American Folk Art and the Ricco/Maresca Gallery in October 1997 feeling moved and filled with
expansive joy. Seeing the mystery of self-discovery in another helps one see it in him or herself. Who
William Hawkins was poured out of him like a fresh spring in a dry meadow. His single brush recalls
the diddley bow, a single-stringed instrument derived from West Africa. One string of bailing wire was
stretched between two nails on a board over a glass bottle, functioning as a bridge and means of
amplifying the sound. One hand with a stick would pound the string while the other moved a slide up
and down to maximize varieties of texture, rhythm, and pitch. This so-called “monochord” or
“sonometre” is rooted in ancient astrology and geography that connects the earth to the universe. Like
“the Devil’s” Delta Blues where songs heal and transform both singer and audience; or like a lotus
flower blooming out of filthy muck, the single brush of Hawkins is a dowser to his spirit, the glorious
wellspring of an unmediated self.