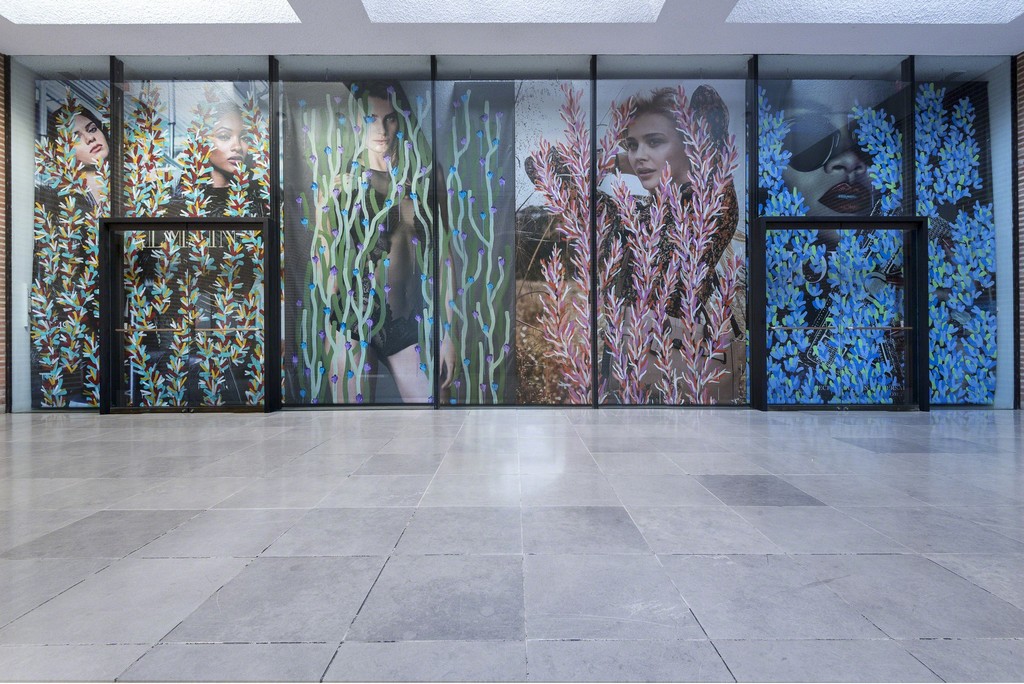 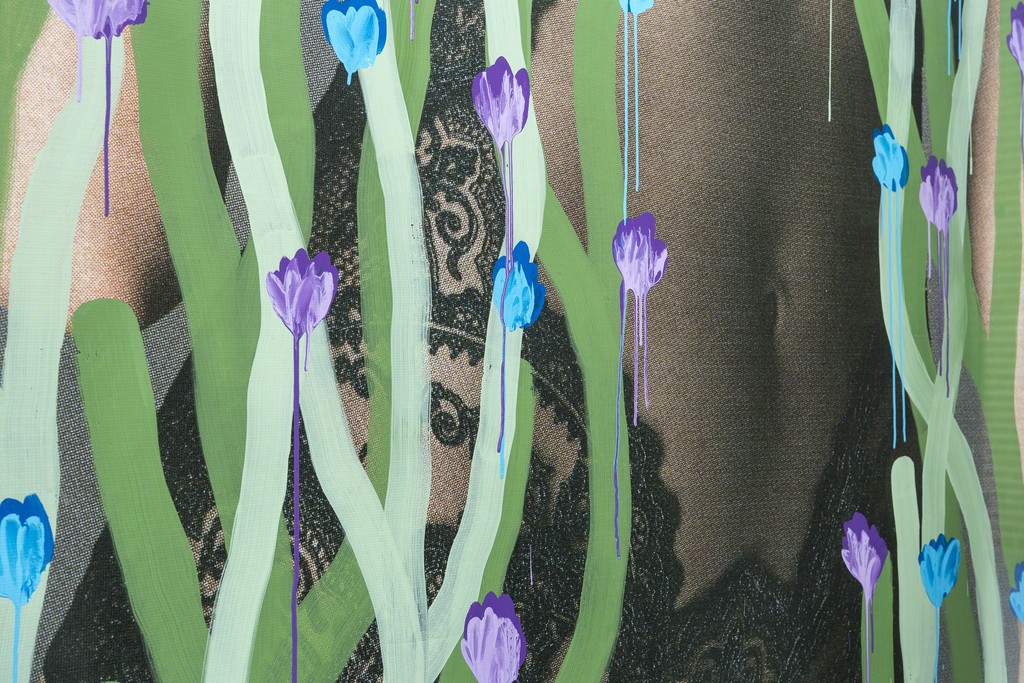 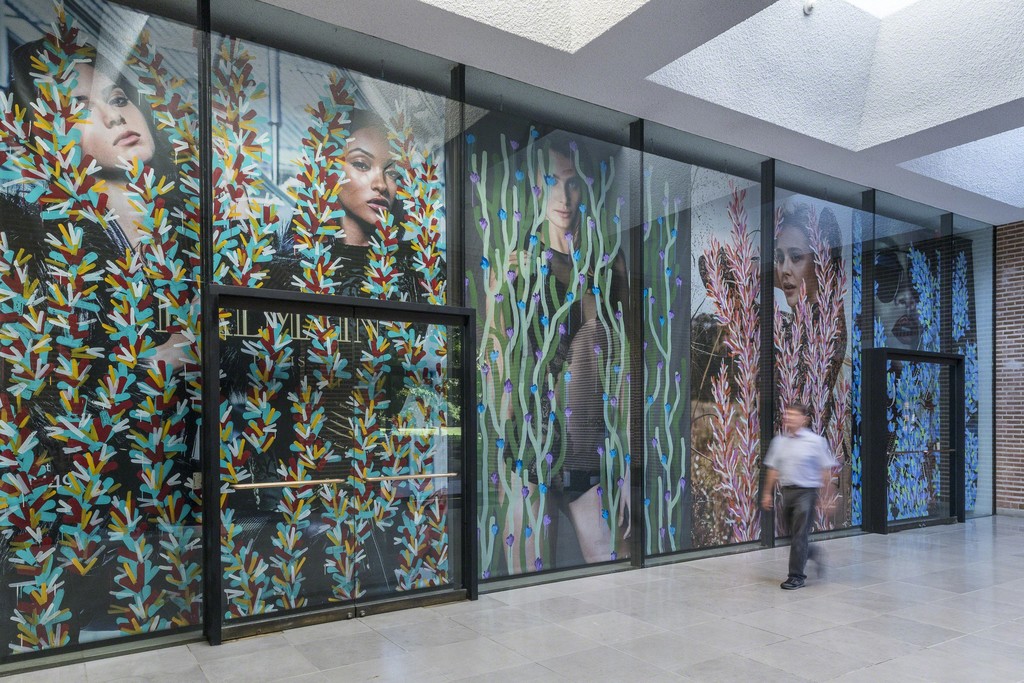 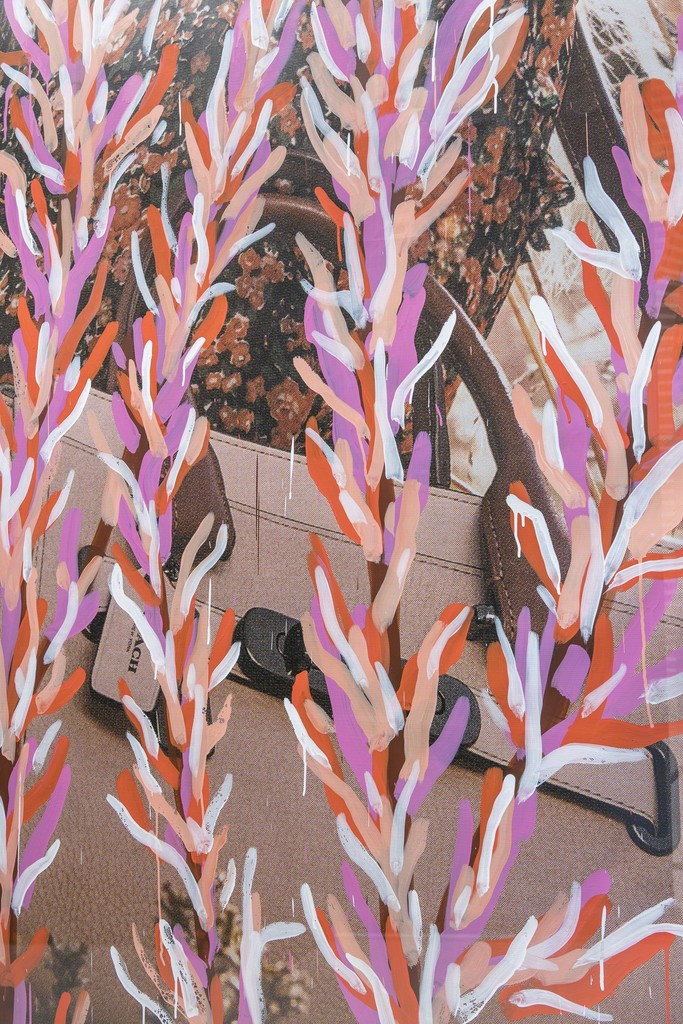 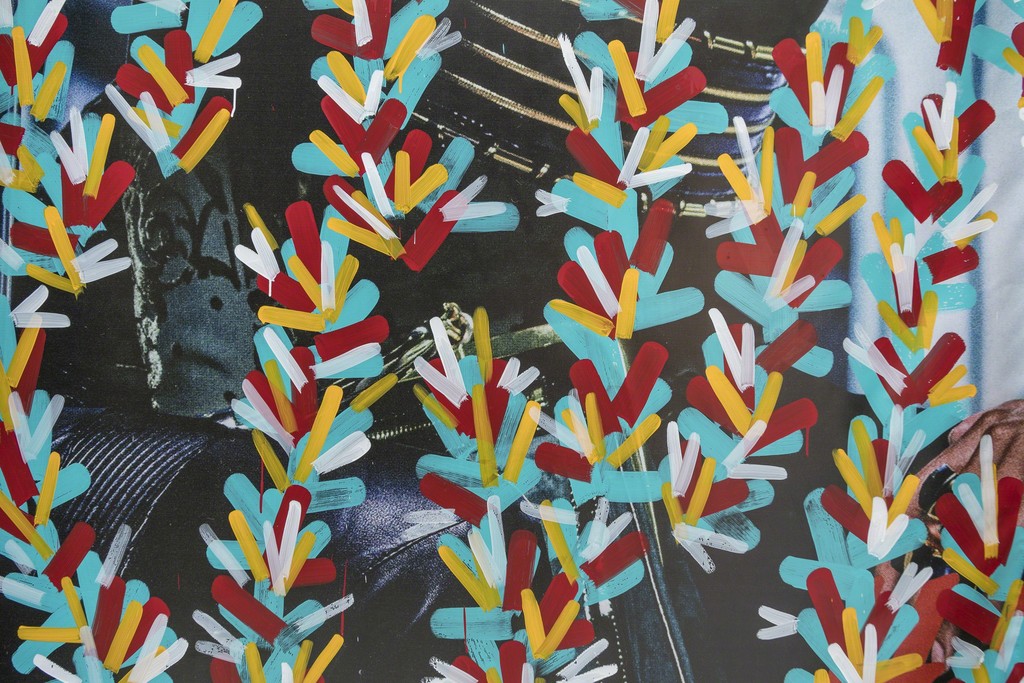 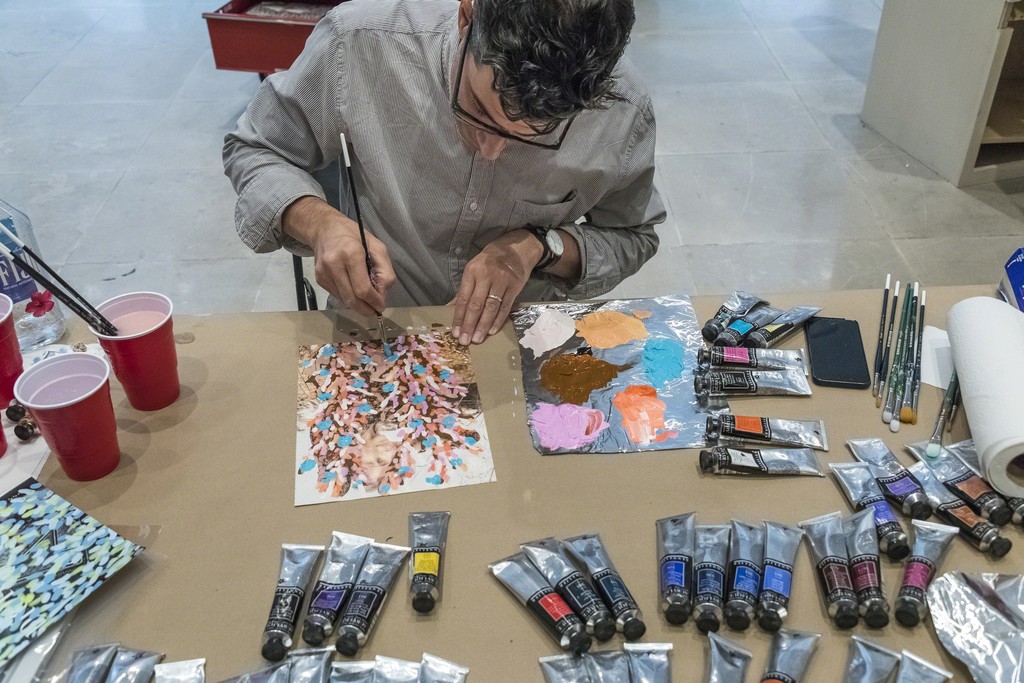 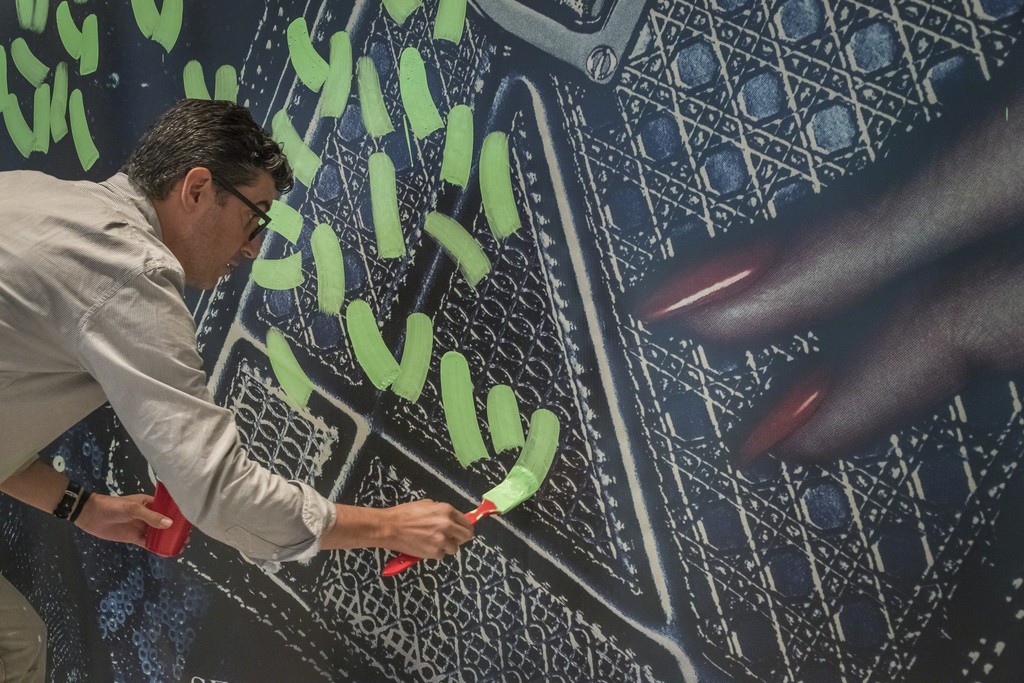 Crosstown Traffic, a new installation by Michael De Feo,
is the seventh exhibition in Rice Gallery’s Summer
Window series, which features works visible through
the glass wall while the gallery is closed for the
summer. De Feo, who was profiled this spring in The
New York Times, is a painter with a penchant for street
art, gaining international recognition for painting over
outdoor fashion ads with buoyant floral patterns. In
Crosstown Traffic, De Feo treats Rice Gallery’s front
glass wall like a supersized commercial display kiosk,
enlarging a selection of fashion ads from magazines,
printing them at nearly billboard size, and hand
painting over them. As if a piece of Times Square or a
large-scale storefront was transported to the gallery,
the floor-to-ceiling imagery engulfs the viewer with ads
for Balmain x H&M, La Perla, Coach, and Dior that De Feo
abstracts and enlivens with pops of color and pattern.
Known as “The Flower Guy,” De Feo has painted
flowers on the streets of New York and in over 60
cities internationally. His iconic line drawing of a
curving stem topped with daisy-like petals can be
seen sprouting from the bases of telephone poles,
tucked in between signs, and embellishing a myriad
of surfaces. A project that started nearly 25 years ago
and continues today began with a simple aim, says
De Feo,“to spread some cheer and smiles in a city full
of concrete, steel, and glass.”
De Feo found a new way of inserting his work into
the daily life of the city when in 2014, Public Ad
Campaign, an international alliance of artists founded
by Jordan Seiler that provides access to municipal
infrastructure for public dialogues, gave him a key
to open advertising kiosks at bus stop shelters
throughout New York City. He removes the lockedaway
fashion ads, brings them back to his studio,
and paints on them using bold strokes of bright color
suggesting flowers. De Feo then returns the ads to
different kiosks, completing what he calls a “quiet
intervention” and an “unauthorized collaboration” with
the company, model, photographer, and art director.
The painted ads have been largely embraced by the
fashion industry for their sensitivity, whimsical quality,
and beauty, which has led De Feo to unforeseen
opportunities: designing two covers for the April 2016
issue of the Neiman Marcus catalogue, THE BOOK,
and designing his own line of scarves and wraps for
Echo New York.
For Crosstown Traffic, De Feo selected specific
magazine ads for their composition, color, styling, and
alluring quality, or what De Feo describes as the “sex
appeal that one would associate with luxury brand
advertising.” Using acrylic paint, De Feo responded
to each ad differently, painting over brand names
and parts of each model’s figure or face, hiding them
behind encroaching arrangements of contrasting and
complimenting colors. Bright blue and green strokes
of paint almost subsume pop star Rihanna, partially
covering her Dior sunglasses and encircling her glittery
red lips. De Feo plunges inside the seductive, fantasy
world of high-end advertising, normally kept at a
distance behind glass or beneath the sheen of a glossy
magazine page, and adds a human touch. Says De Feo:
“One of the compelling aspects of working on fashion
advertisements is that although I’m subverting the ads,
they frequently end up reading like they were designed
that way.”
ABOUT THE ARTIST
Michael De Feo grew up in Rye, New York, graduating from
the School of Visual Arts in Manhattan in 1995 with a degree in
graphic design. He began installing his art on the streets in the
early 1990s and in 1993 started his now iconic flower project.
A Master of Arts in Teaching from Manhattanville College in
Purchase, New York led to a job teaching art at Westhill High
School in Stamford, Connecticut for 15 years, until he left in
2013 to pursue his artistic career full-time. De Feo’s work has
been shown at venues including The Aldrich Contemporary
Art Museum, Ridgefield, CT; MASS MoCA, North Adams, MA;
Museo de Arte de Puerto Rico, San Juan, PR; The New Museum
of Contemporary Art, NY; and StolenSpace, London, UK. He
created a series of paintings for a line of women’s accessories
developed in partnership with Echo New York, which launched
in March 2016. The products are available at Bloomingdale’s,
Lord & Taylor, and echodesign.com. De Feo also created work
for a promotional campaign for designer Christian Louboutin.
Michael De Feo lives and works in New York. He is represented
by Danziger Gallery in New York where he will have a solo
exhibition opening July 13th, 2016.
SUPPORT AND SPONSORSHIP
Rice Gallery exhibitions and programs receive major support
from the Rice University Art Gallery Patrons. Additional support
comes from Rice Gallery Members, the Robert J. Card, M.D. and
Karol Kreymer Catalogue Endowment, and the Leslie and Brad
Bucher Artist Residency Endowment. The Gallery receives partial
operating support from the City of Houston; KUHF-FM and Saint
Arnold Brewing Company provide in-kind contributions.
SUMMER WINDOW HOURS
The Summer Window installation is visible through the gallery’s
front window during regular building hours:
Monday - Friday: 7:00 a.m. - 9:00 p.m.
Saturday - Sunday: 11:00 a.m. - 5:00 p.m.
GALLERY ADMISSION IS FREE.
LOCATION AND PARKING
Rice Gallery is on the ground floor of Sewall Hall and is reached
using Campus Entrance 1 located at the intersection of Main
Street and Sunset Boulevard. Paid parking (credit card only) is
available in the Founder’s Court Visitor Lot directly in front of
Sewall Hall.
For other parking options visit: rice.edu/parking
By METRORail: Hermann Park/Rice University Station.
WHEELCHAIR ACCESS
Wheelchair access is on the south (left) side of the building.