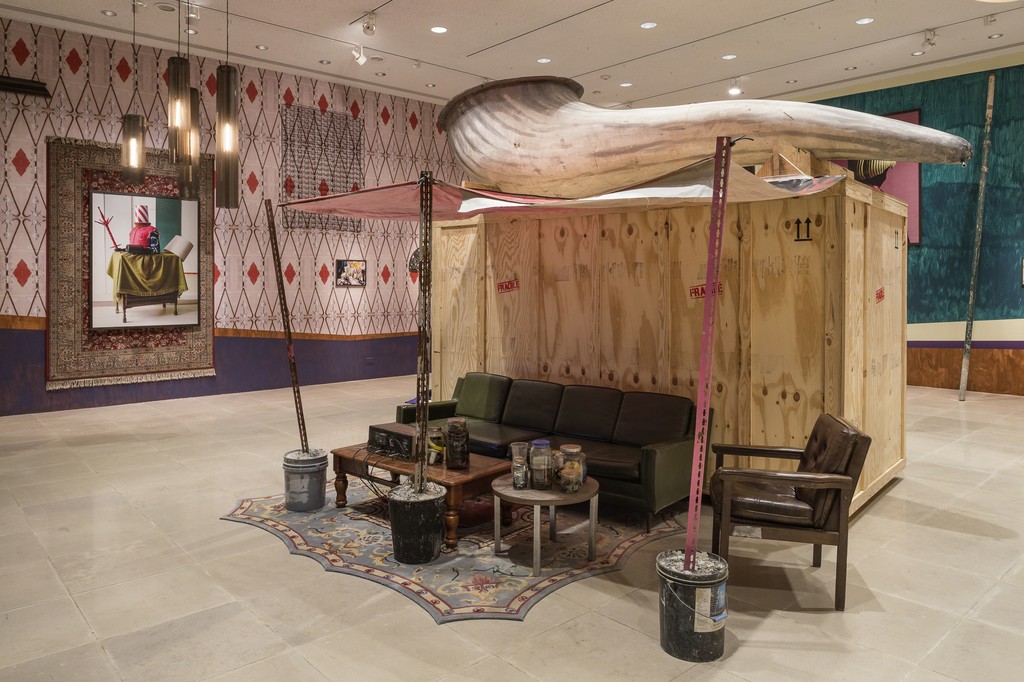 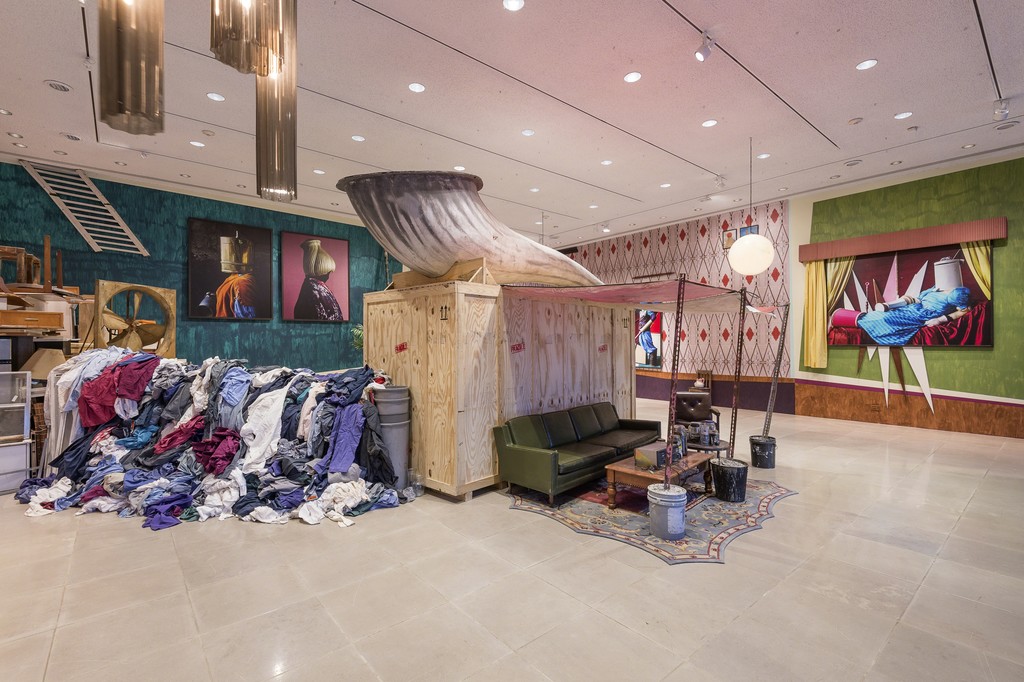 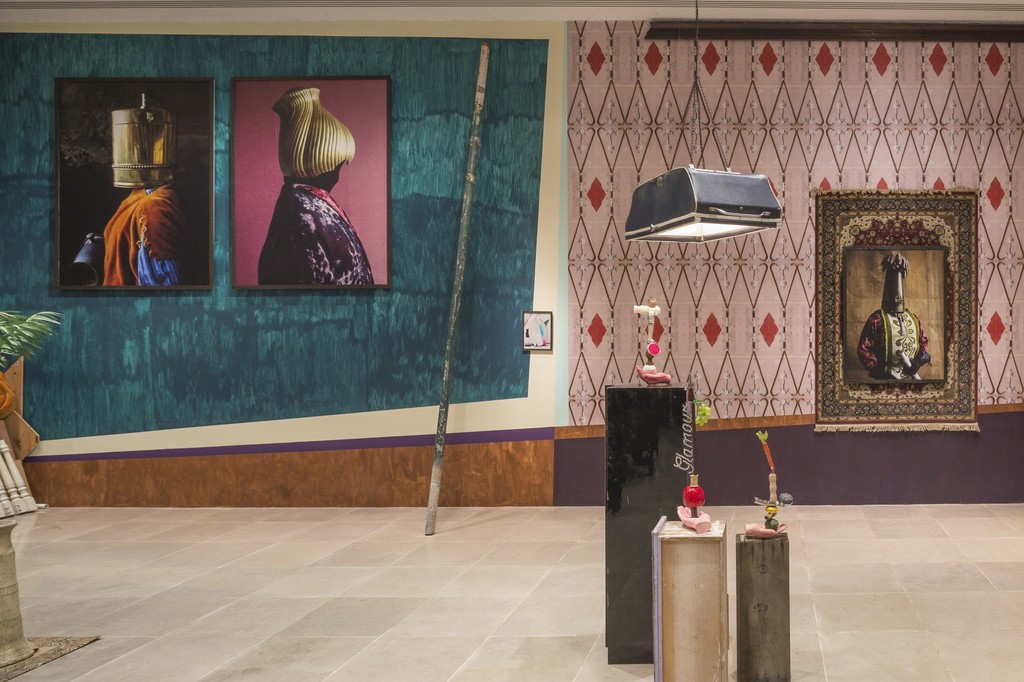 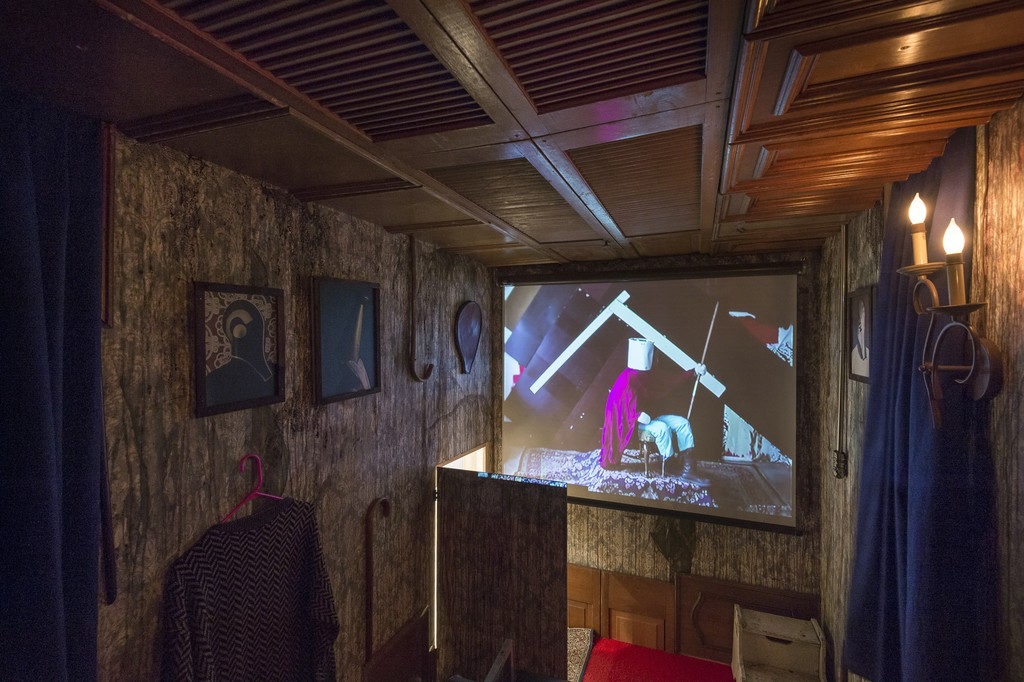 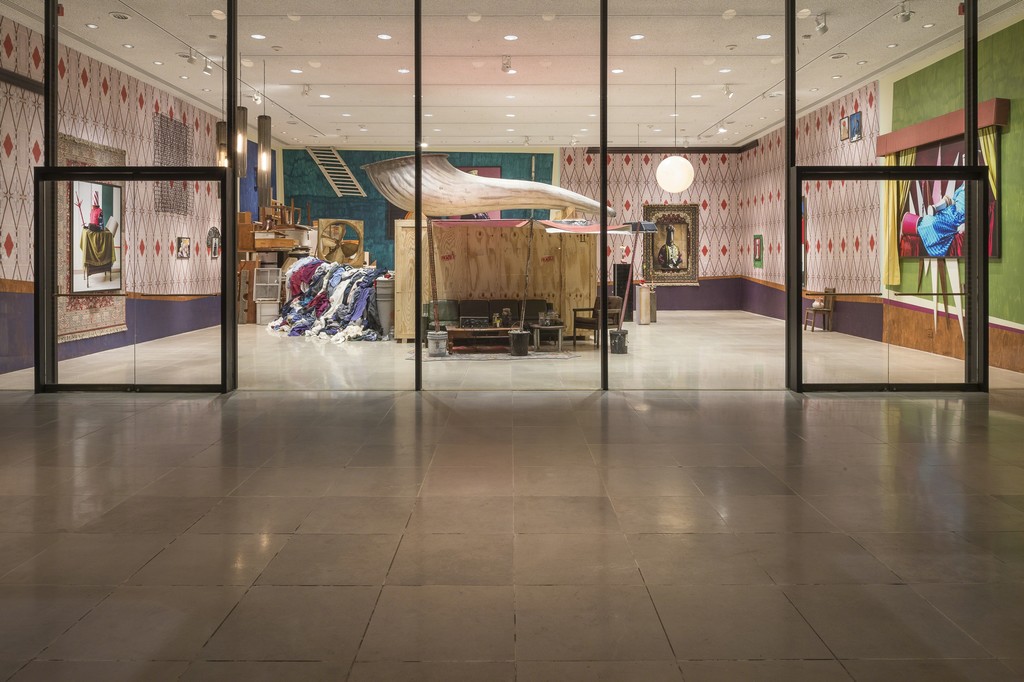 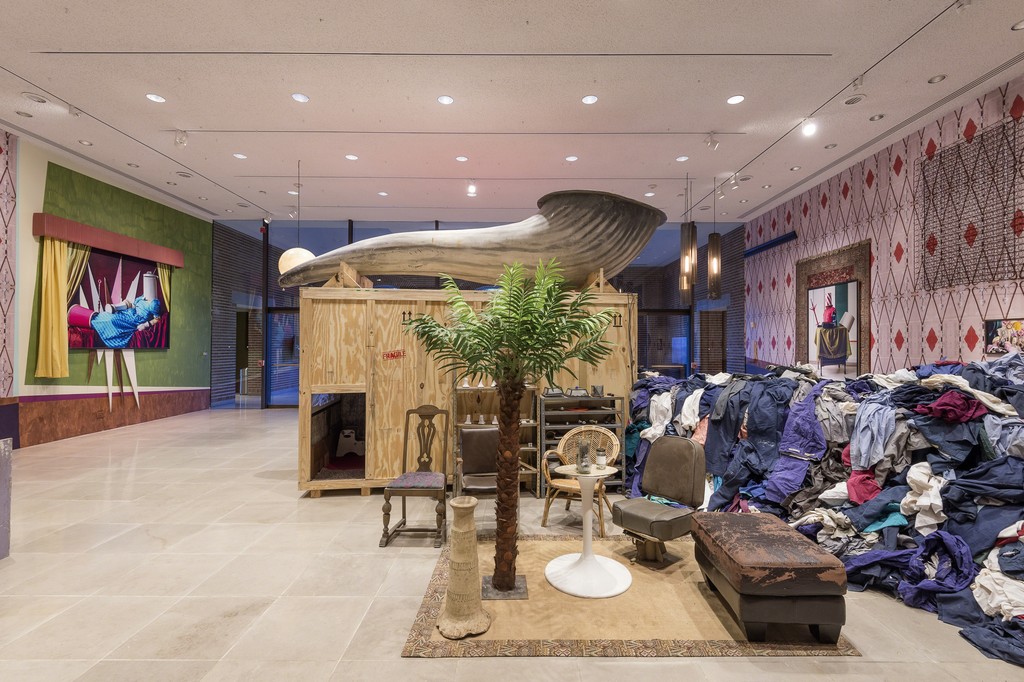 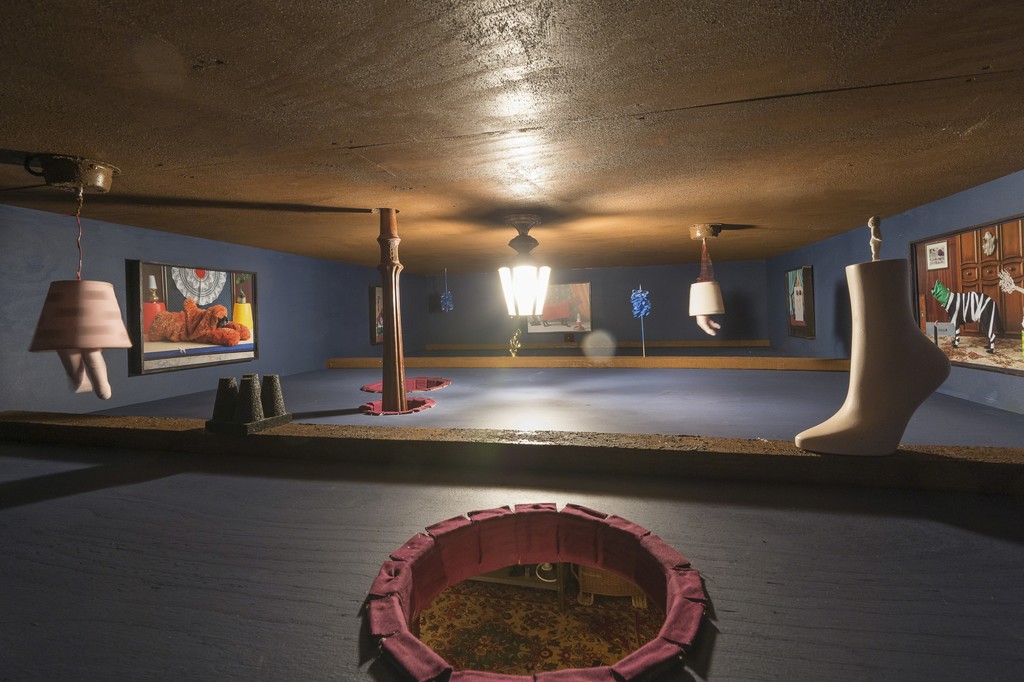 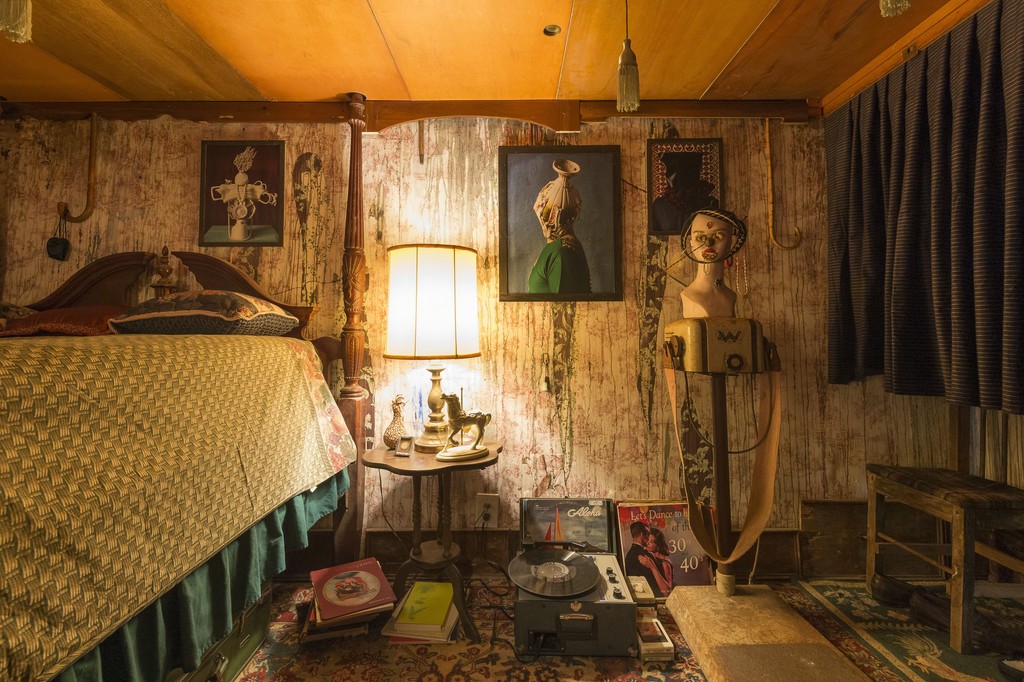 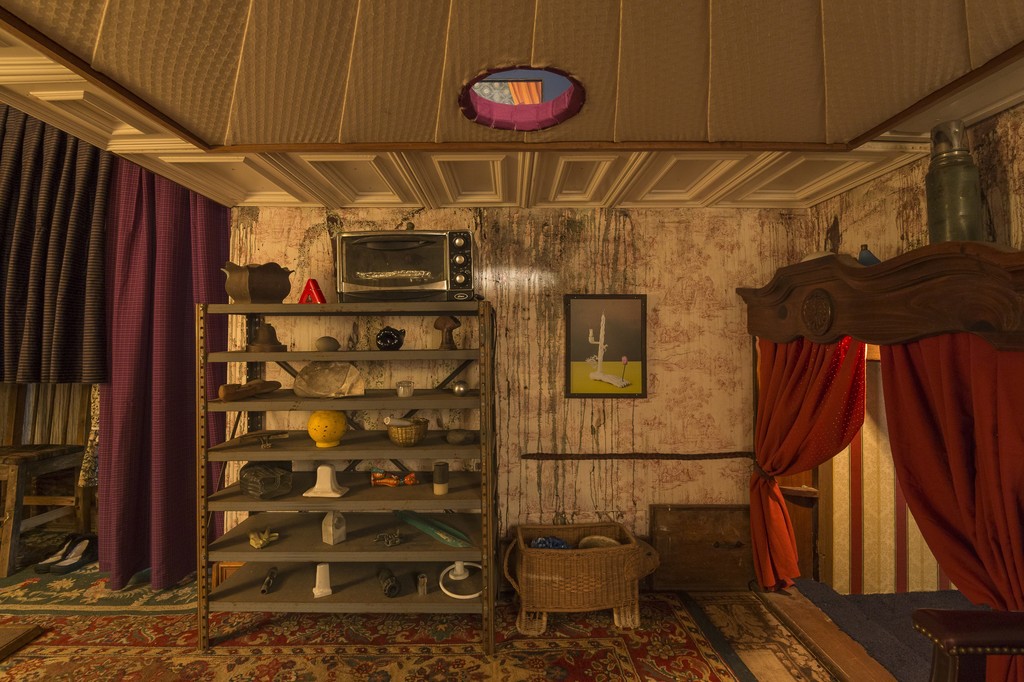 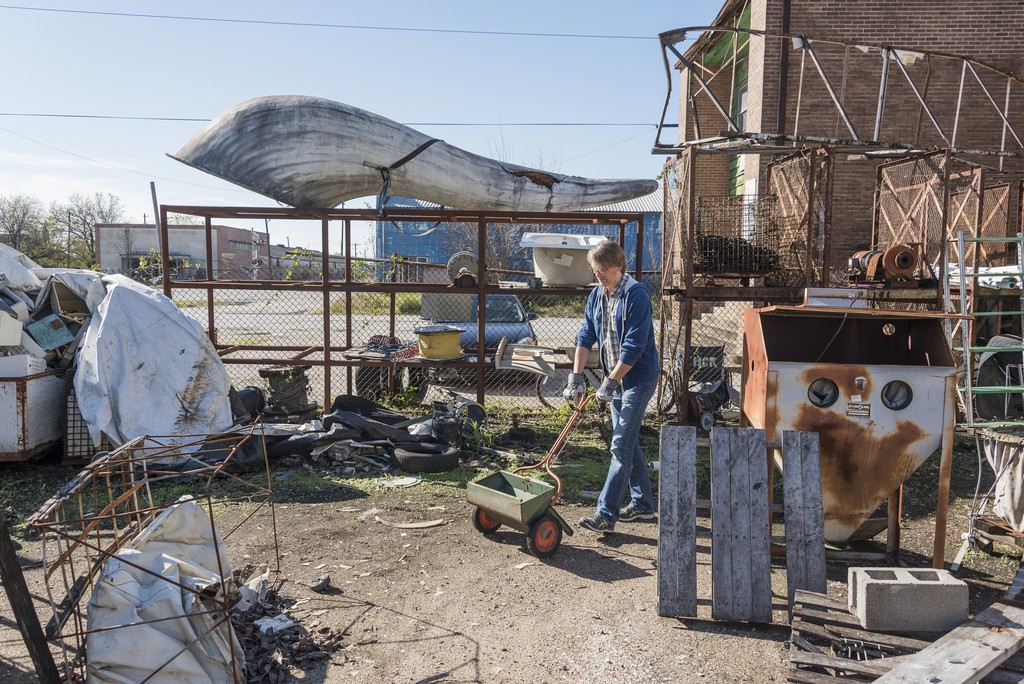 HOUSTON, Texas, (November 12, 2015) — Rice University Art Gallery has commissioned German artist Thorsten Brinkmann to create a new site-specific installation, The Great Cape Rinderhorn, for his first museum solo-exhibition in the United States. Working primarily from objects found in Houston, Brinkmann will turn Rice Gallery into a place where the familiar is made strange as castaway goods are reimagined through Brinkmann’s idiosyncratic sensibility that combines assemblage sculptures with his self-portrait and still life photography.A self-proclaimed serialsammler (“serial collector”), Thorsten Brinkmann keeps whatever catches his eye as he sifts through the stuff we have hopelessly accumulated from the broken and discarded to functional goods sitting in purgatory on thrift store shelves. In his Portraits of a Serialsammler series, Brinkmann turns his finds into creative costumes of fabric-scrap vests, cloaks made from pleated skirts, and trash can helmets and photographs himself wearing these ensembles, yet never shows his face. The images marry the traditional and absurd as he strikes the poses of regal knights or monarchs, drawing from centuries of Western’s paintings conventions of portraiture. In another series, studiobluten (“studio blossoms”), Brinkmann arranges objects he has collected into elegant still lifes that mine painting traditions like Dutch Vanitas. Coat hangers, chipped vases, dented pots and pans, and miscellaneous bric-a-brac are given a fresh life through Brinkmann’s playful recombination and reframing.

To create room-size installations, Brinkmann brings together his collected objects, sculptures, and photographs. For his most ambitious work to date, La Hütte Royal (The Royal Hut), 2013, Brinkmann worked over two years in an abandoned and dilapidated home that had been inhabited by squatters in Pittsburgh and bought by collector Evan Mirapaul for Brinkmann’s project. The two-story home’s non-descript brick façade looks like many others in the neighborhood, but inside Brinkmann constructed rooms within rooms, turned the chimney into a secret passageway, and even left some things as he found them to create what Art in America described as a “grotesque palace.” Inspired by his “art hero” Kurt Schwitters’ legendary Merzbau – the home and studio that from 1923 to 1937 Schwitters turned into a cave-like space of faceted, geometric grottoes housing his found-object sculptures – Brinkmann describes the Pittsburgh house as a “gesamtkunstwerk, where art and life melt into one.” Brinkmann will follow a similar approach at Rice Gallery to create a new installation that will grow organically out of itself as he responds to the space and the things he finds.

Thorsten Brinkmann was born in Herne, Germany in 1969. He studied visual communication at the Kunsthochschule Kassel (1994-1997) and fine arts at the Hochschule für Bildende Künste Hamburg (1997-2004). Brinkmann has had recent solo exhibitions at the Palais für aktuelle Kunst, Glückstadt, Germany (2014); In Flanders Fields Museum, Ypres, Belgium (2014); Kunsthalle Bremerhaven, Germany (2013); Museo Nacional de San Carlos, Mexico City, Mexico (2012), and Kunsthalle zu Kiel, Germany (2011). He has participated in group exhibitions throughout the world in Belarus, Belgium, England, Germany, Ireland, Israel, Japan, Russia, South Korea, and Yemen, including Dress Codes (2009), the third triennial of photography and video at the International Center for Photography, New York, and the fifth edition of the Beaufort triennial, Beyond Borders (2015), an outdoor exhibition that took place on the Belgian coast in the Province of West Flanders. Brinkmann has been an artist in residence at the In Flanders Field Museum, Ypres, Belgium (2014), and The Andy Warhol Museum, Pittsburgh, Pennsylvania (2012). In 2011, he was awarded the Finkenwerder Art Prize. His work resides in collections at the Hamburger Kunsthalle, Hamburg, Germany; Museum der Moderne, Salzburg, Austria; Fotomuseum Winterthur, Switzerland, and the Falckenberg Collection, Hamburg, Germany. Thorsten Brinkmann lives and works in Hamburg, Germany.