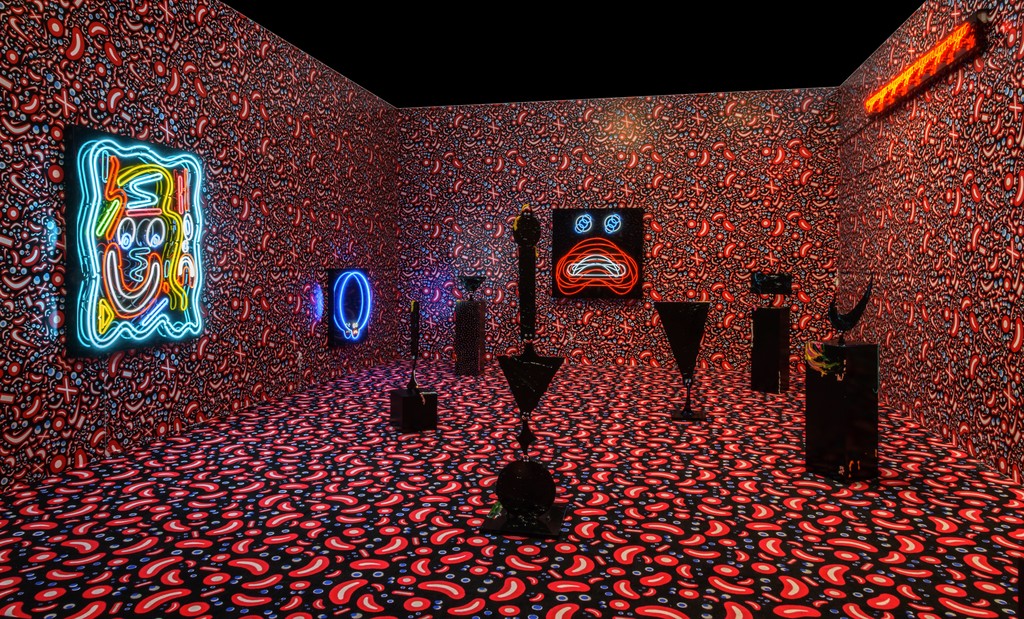 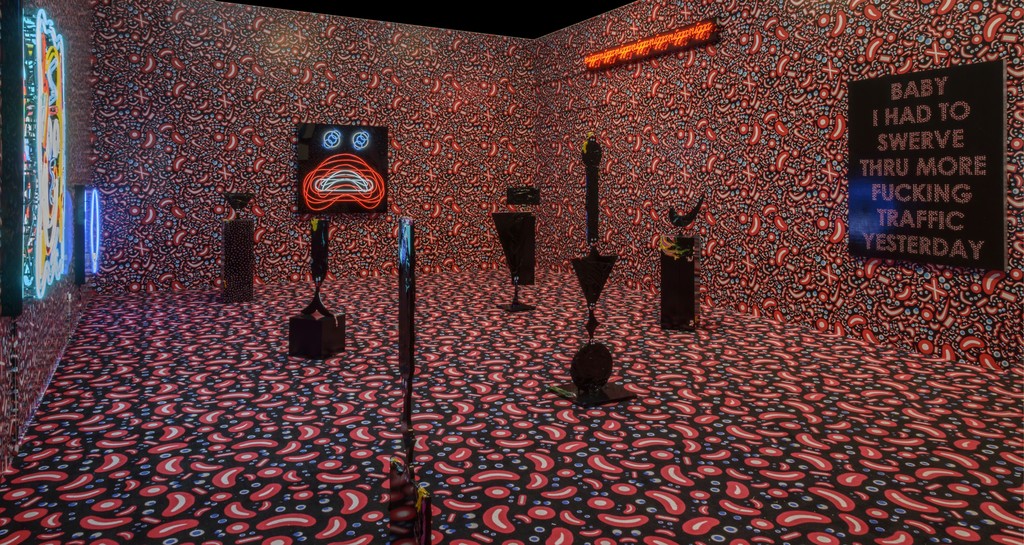 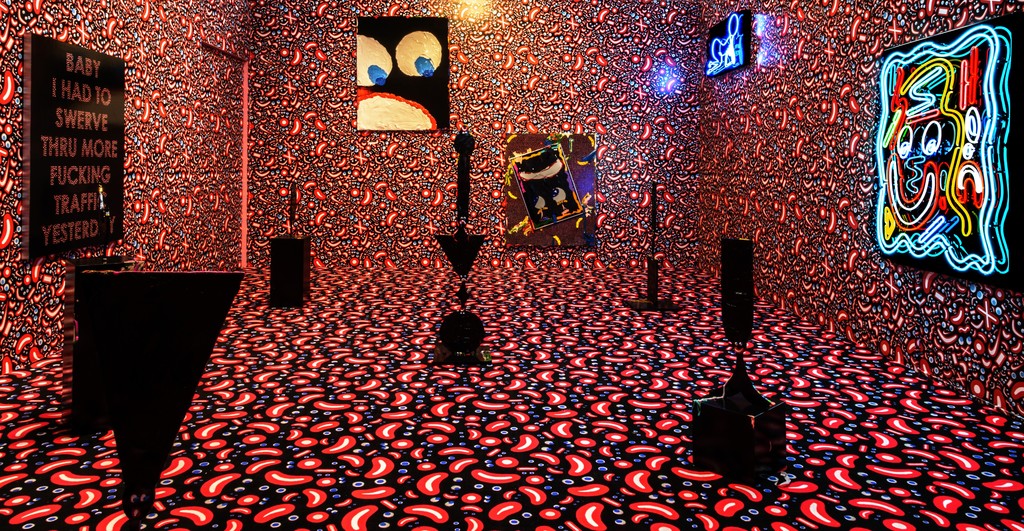 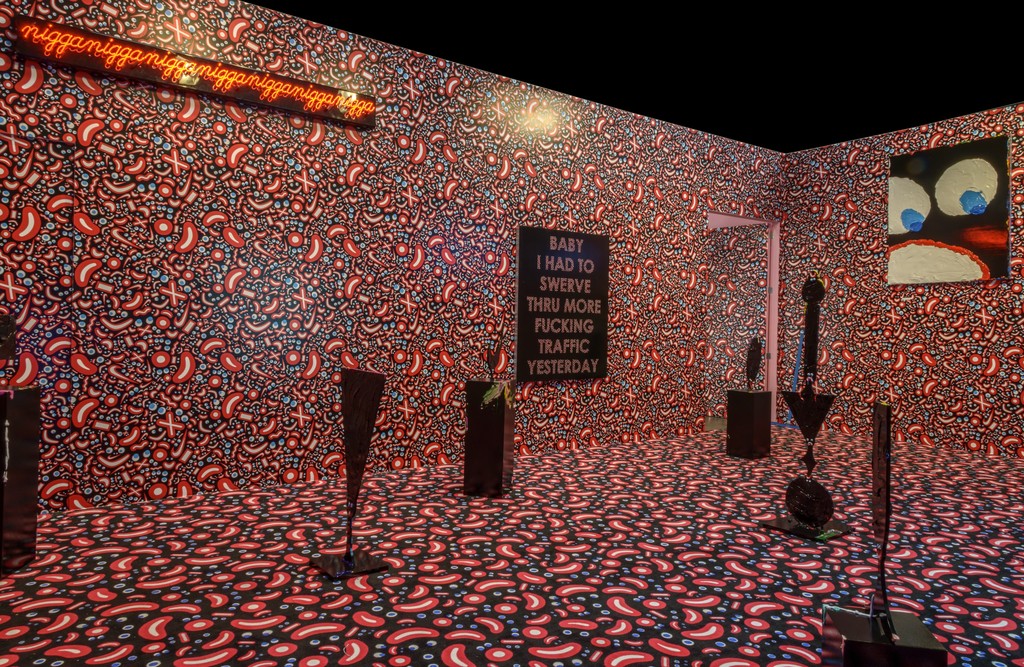 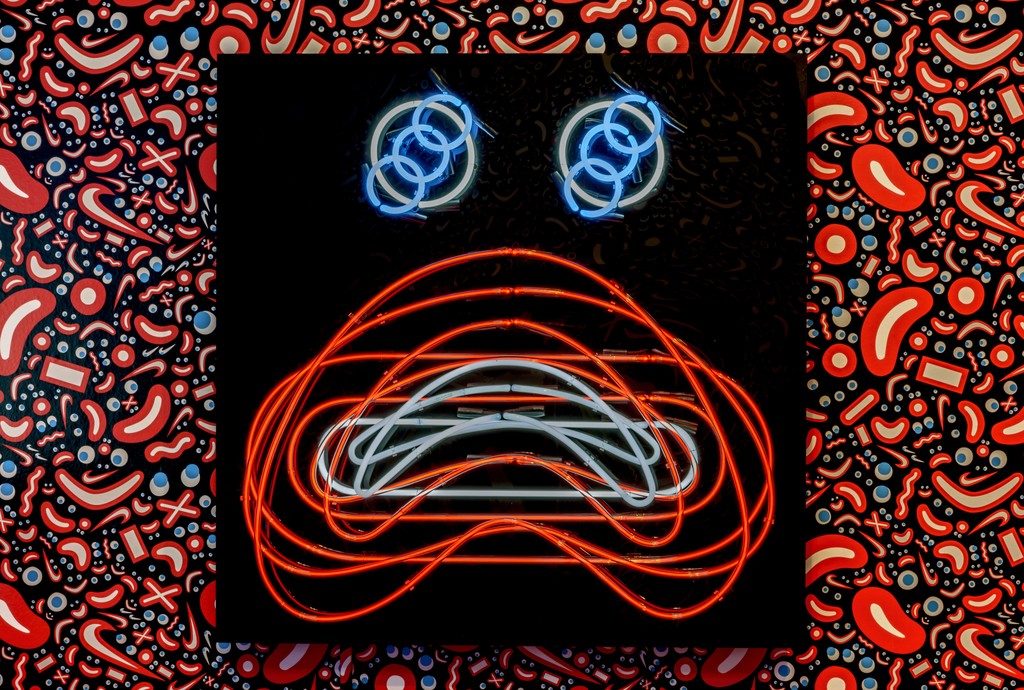 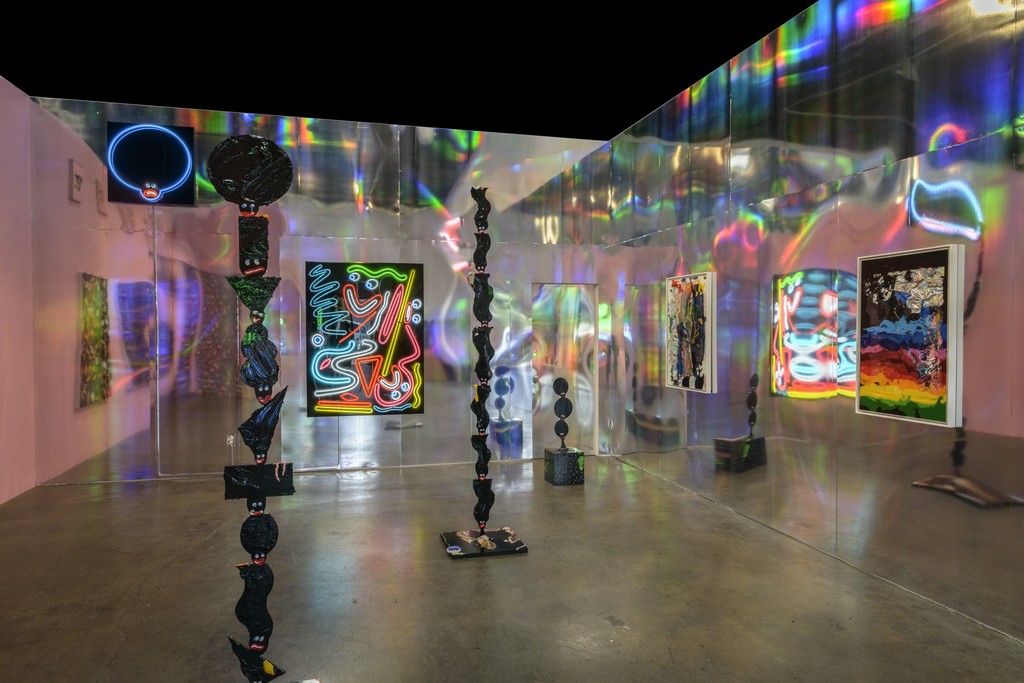 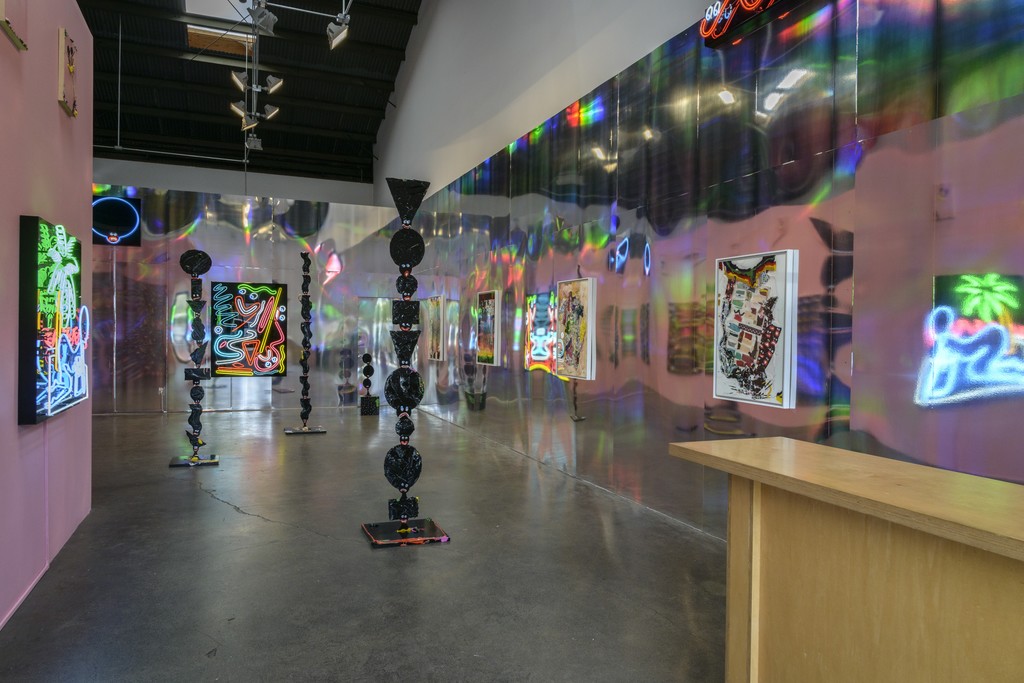 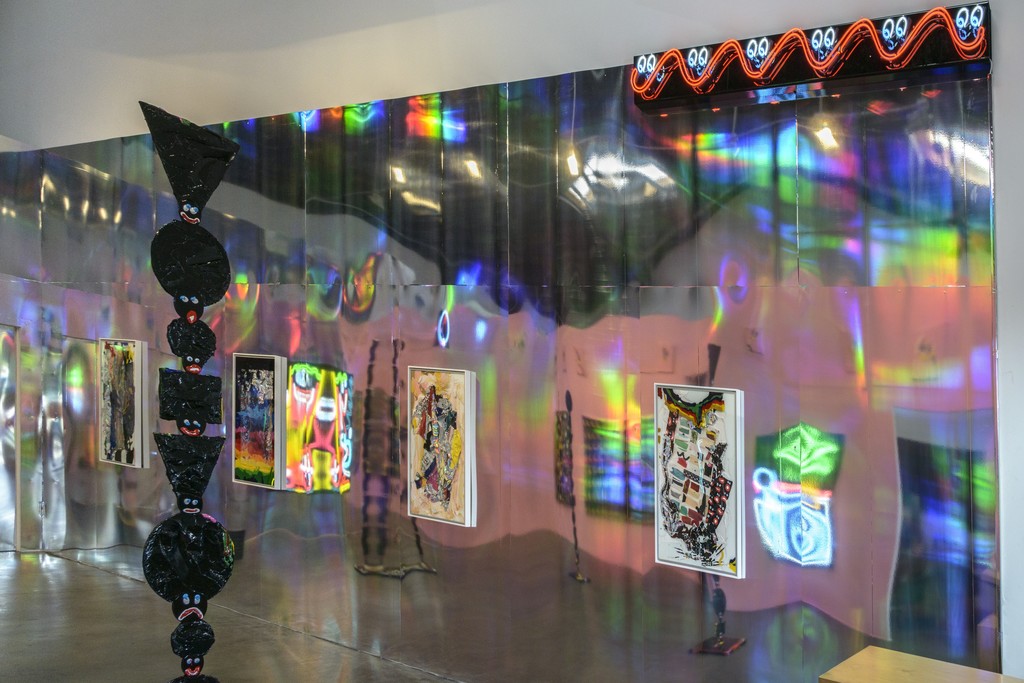 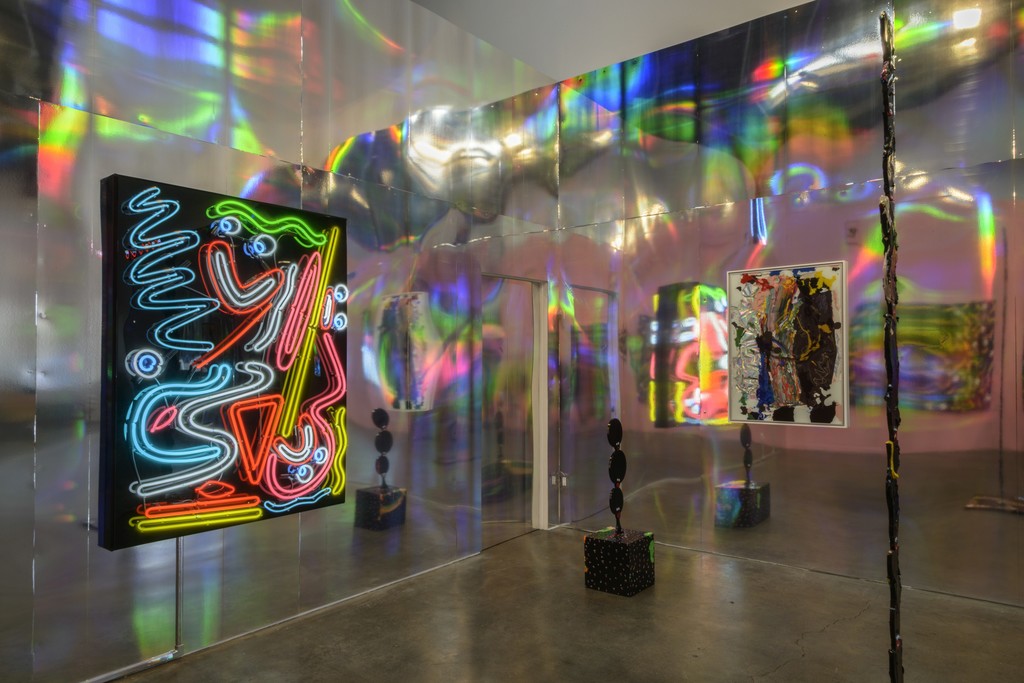 Richard Heller Gallery is pleased to present "They Should've Never Given You Niggas Money" and “What if Yayoi Kusama had Jungle Fever?," a two-part solo exhibition by Los Angeles-based artist Devin Troy Strother. This is Strother’s fourth solo exhibition at Richard Heller Gallery. The upcoming exhibition takes its name from a line in a comedy sketch about Rick James by the great comedian Dave Chappelle. The two-part links are here if you’ve never seen the skit: https://www.youtube.com/watch?v=dJB0BkJlbbw / https://www.youtube.com/watch?v=Z63dJbcl1VU

Behind any work that I do there’s always an element of humor. The current works revisit some previous motifs, such as the aluminum painted sculptures, but also go in a new direction with installation and neon. Neon, wallpaper and carpet are all areas that I’m interested in exploring more, as well as how to do a show that may have a lot going on in a room while, at the same time, have the room not feel overbearing with works.

The paintings in the show come from a traditional sense of my practice while the sculptural and installation pieces are trying to simultaneously combine the thinking of the viewer, the title of the work, and the work itself all as one object.

The banana is a reoccurring image in a lot of the paintings. The image of a banana has certain cultural ties in contemporary art and among certain ethnic groups. The banana also has sexual undertones that I’m interested in exploring more. The banana is a heavy fruit in my opinion.

I feel that this show talks about a trope that’s quite common within the world of black youth today. Sometimes, young African Americans go the stereotypical route of becoming a rapper, an athlete, or some type entertainer. Basically going the traditional route of being a performer in some capacity. Not all, of course, but some do take this path, become very successful at it, and subsequently attain massive amounts of wealth. However, once their fortune is attained, they still don’t know how to spend their money wisely or invest it properly. It’s a common problem for a lot of black youths from today’s younger generation, as well as my own, of not knowing what to do with a large sum of money once it’s been earned.

The main focus of the show is to further the conversation. From the complete disconnect of doing a painting show to doing work that is more relational. Like my last show in New York, transforming the gallery is something that I’m heavily interested in implementing into my ongoing practice. Installation is the route that I’m looking to move toward in the future. I’m not sure what the outcome will be at the end of my exploration, but this show is a marker in the evolution from painting to installation. I feel that it’s a natural progression toward expanding the visual aesthetic that I commonly use in a more relational way.

Strother was born in 1986 in West Covina, California. He received his BFA from Art Center College of Design, Pasadena, CA in 2009. He completed a residency at Skowhegan School of Painting and Sculpture in Skowhegan, Maine in 2010. He’s had solo shows at Richard Heller Gallery in Santa Monica, CA; Marlborough Chelsea in New York, NY; and Bendixen Contemporary Art in Copenhagen, Denmark. Strother has also been in numerous group exhibitions, currently at the California African American Museum, Los Angeles, CA; and recently at Anonymous Gallery, Mexico City, Mexico; and Galerie Division, Montreal, Quebec, Canada. Strother’s exhibitions have been reviewed in assorted publications including the New York Times, Los Angeles Times, and Modern Painters Magazine. His works are in the permanent collections of The Los Angeles County Museum of Art; The Santa Barbara Museum of Art; and the Studio Museum in Harlem.