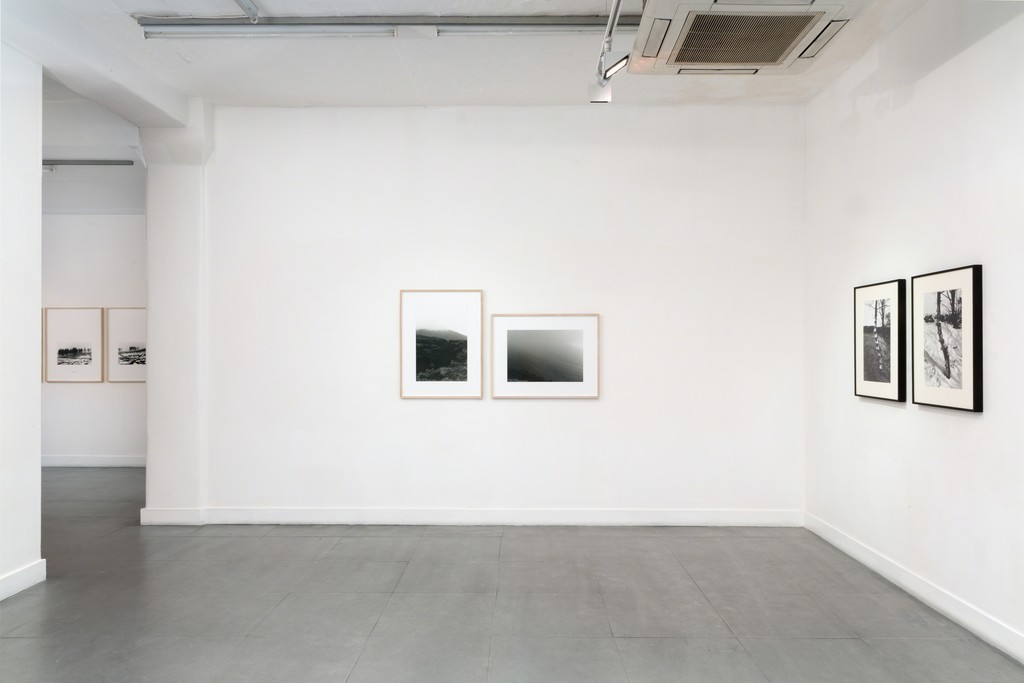 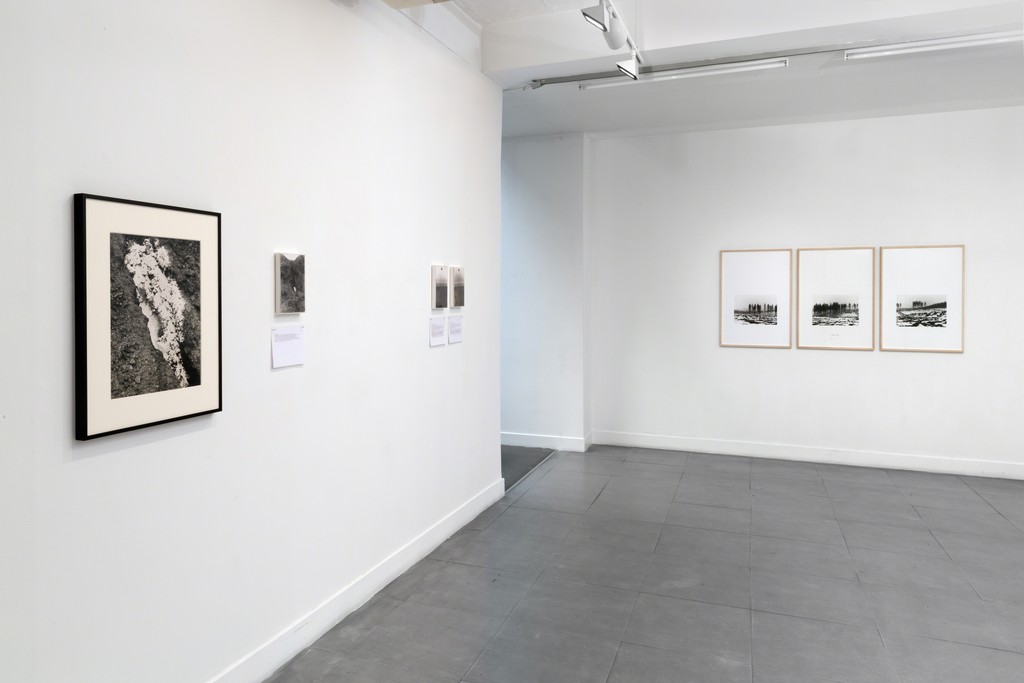 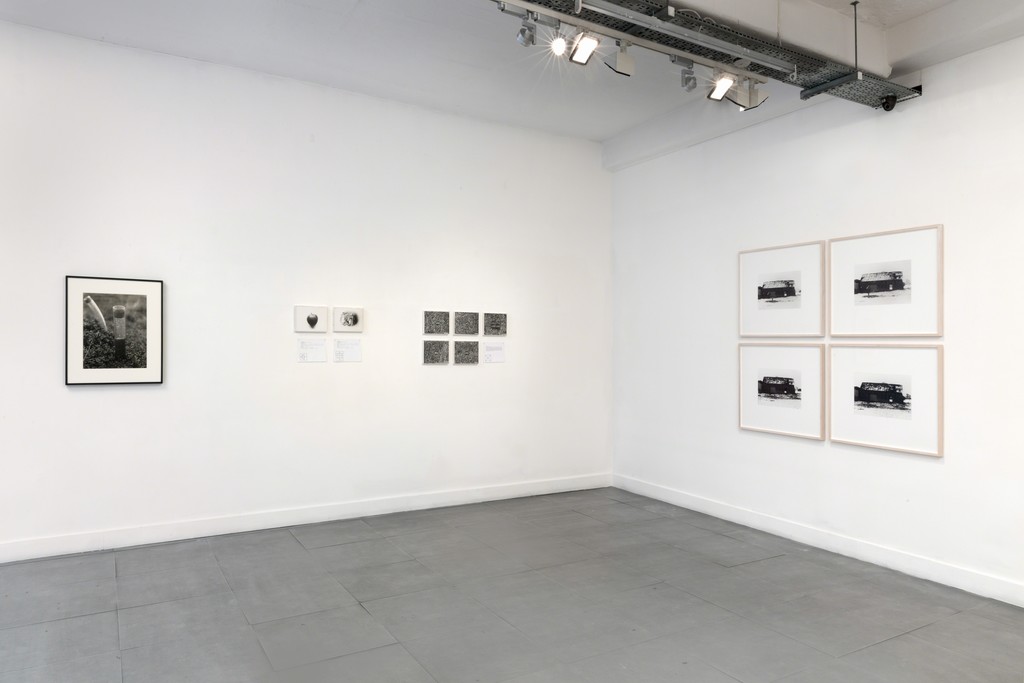 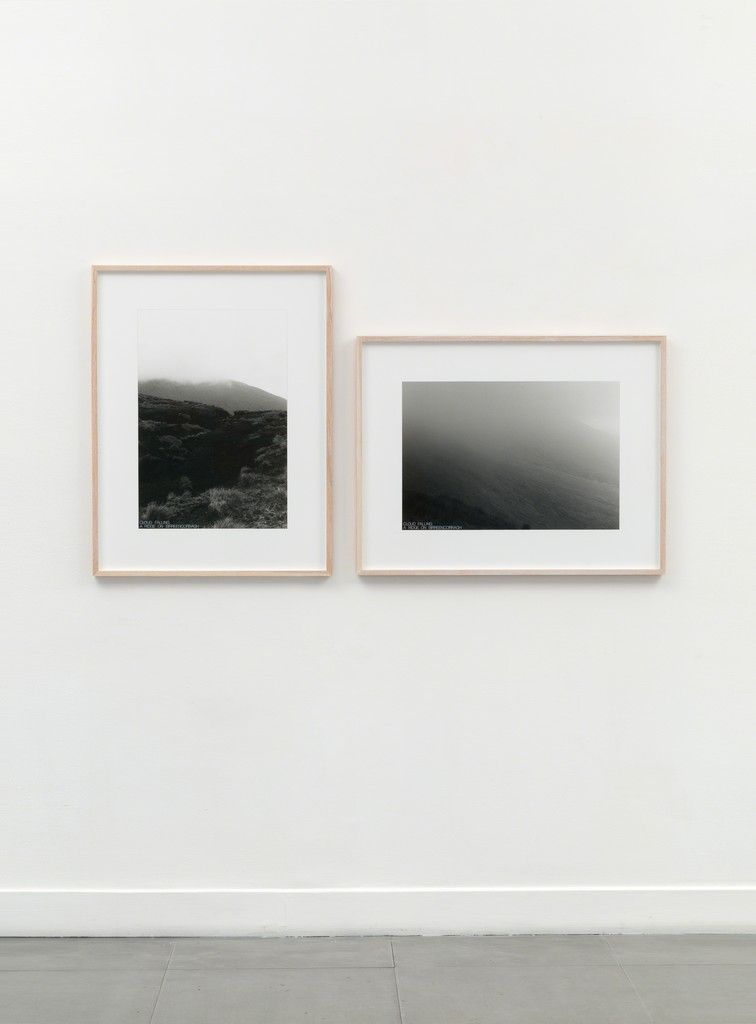 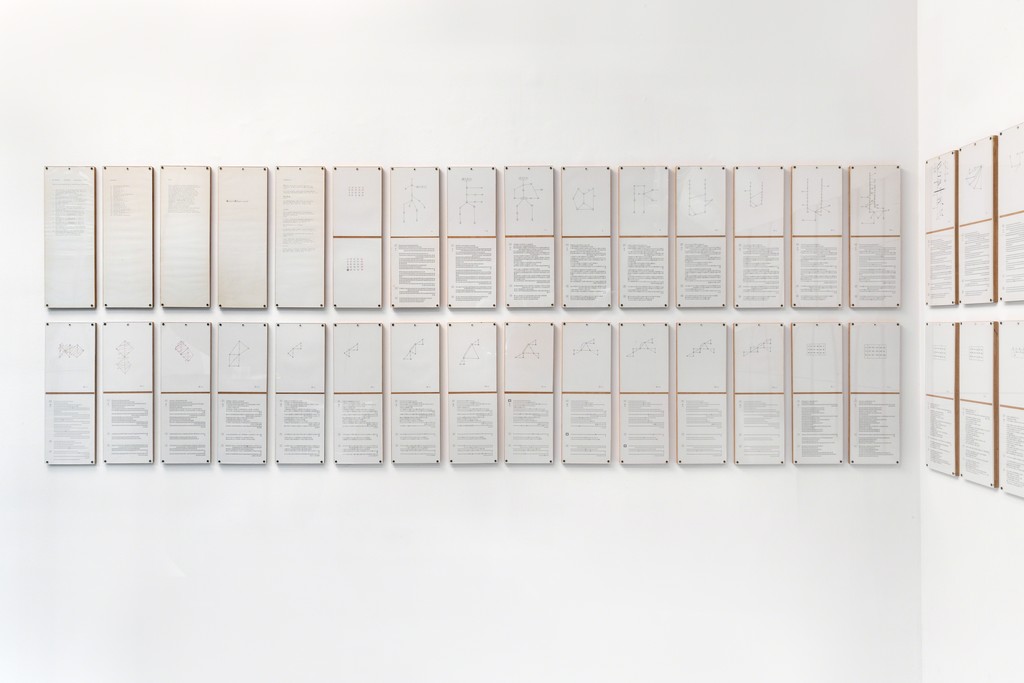 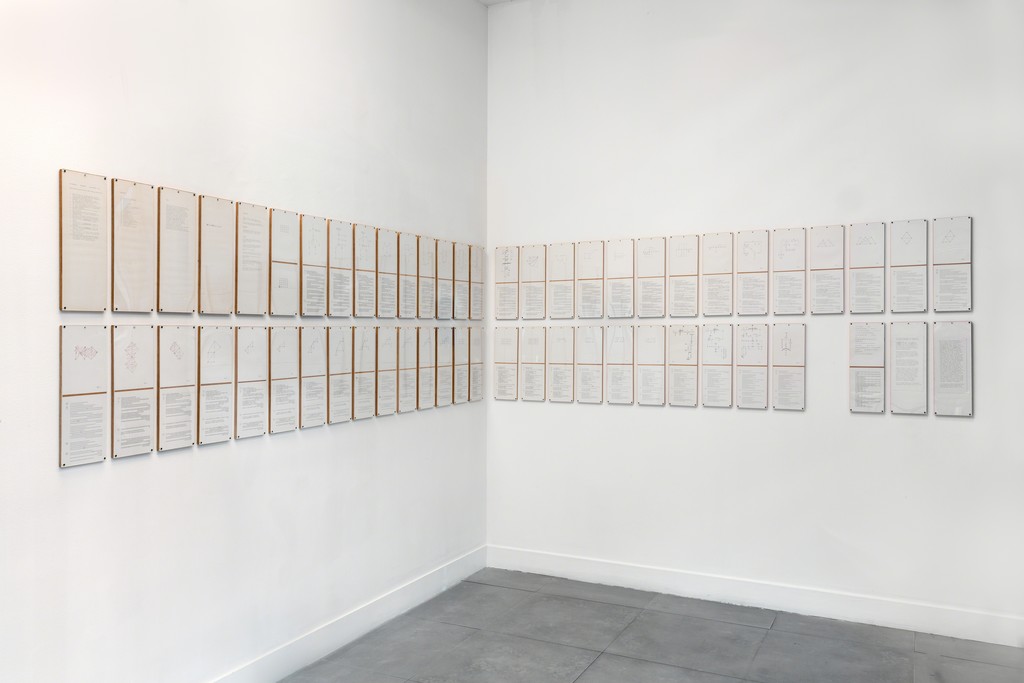 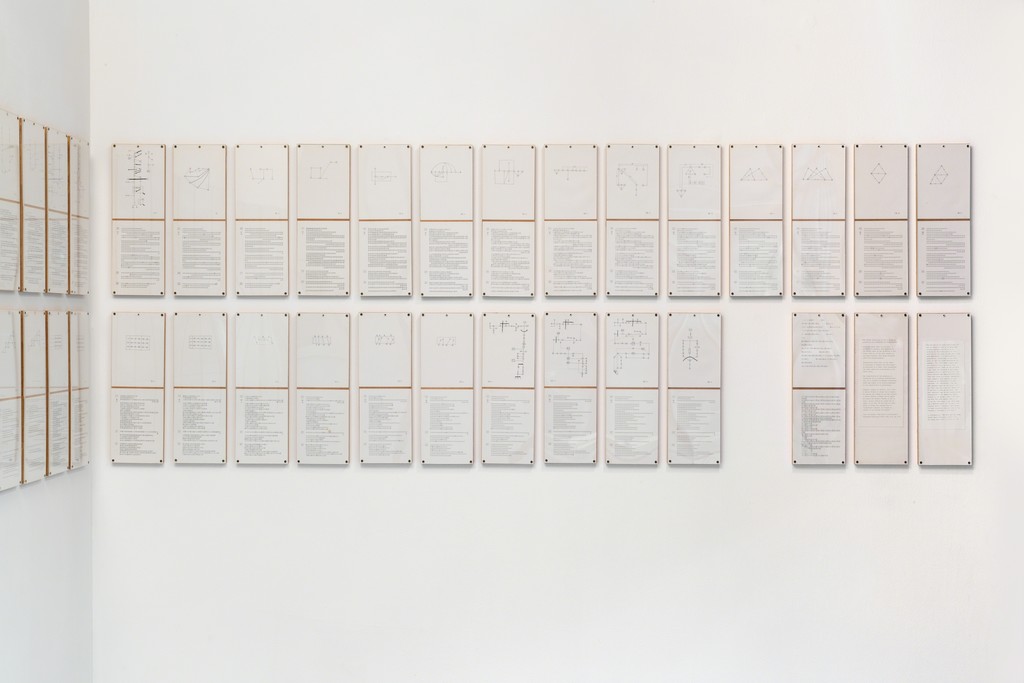 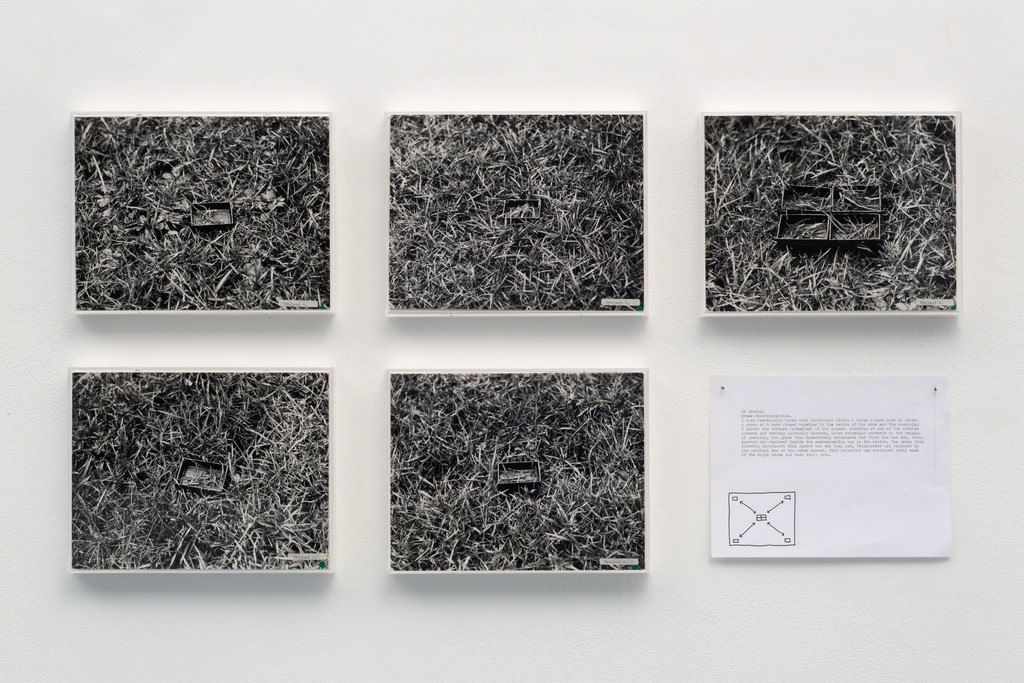 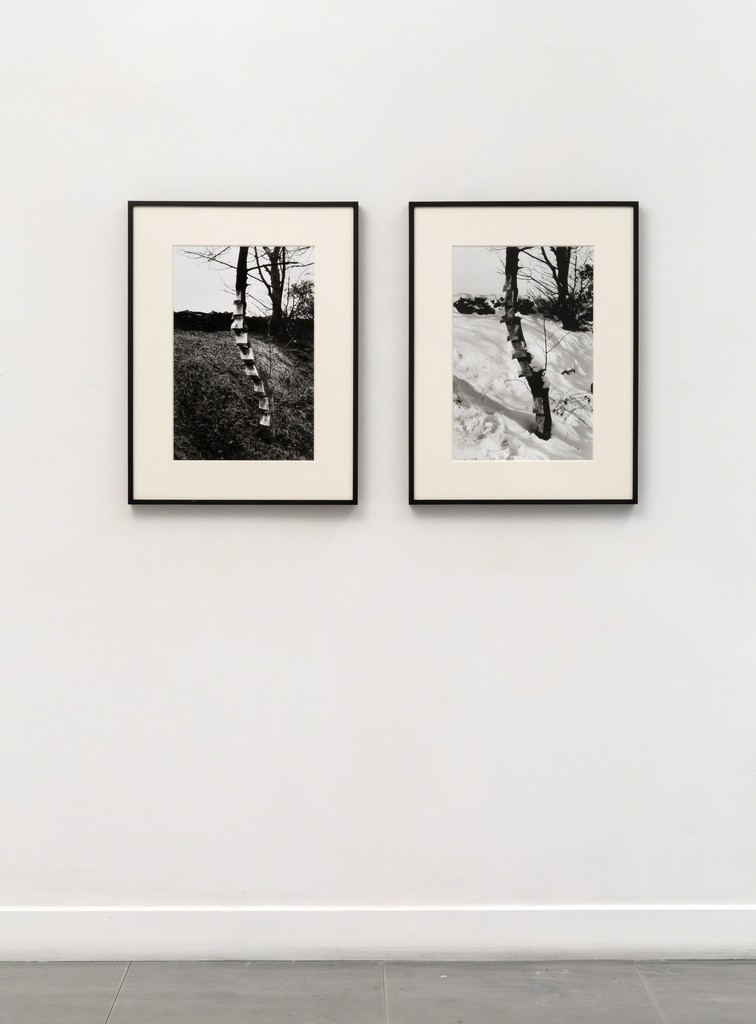 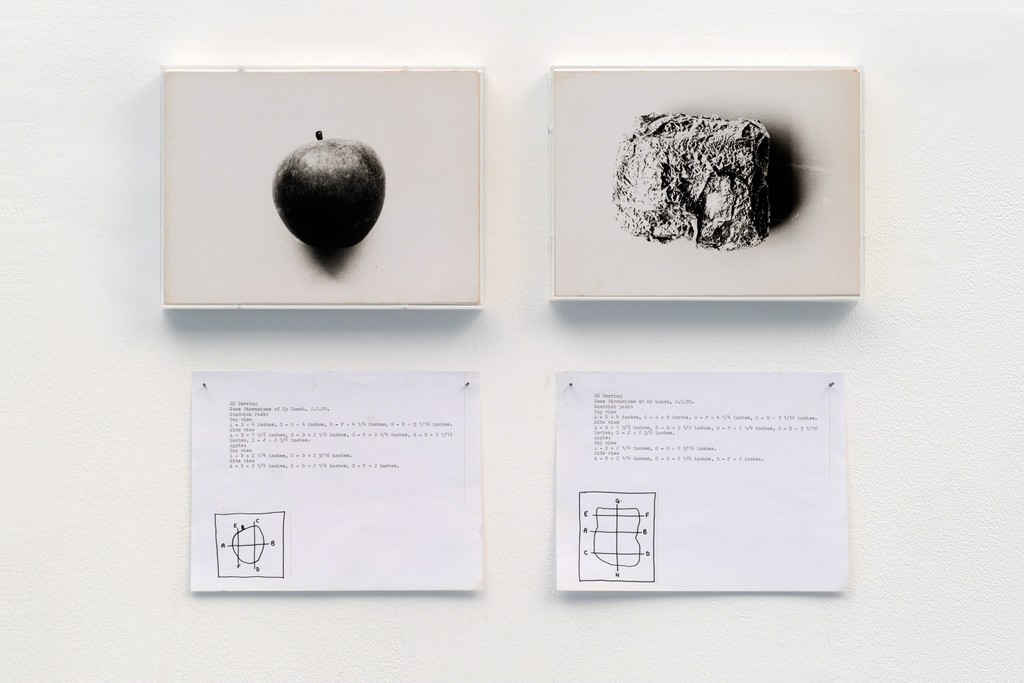 Richard Saltoun Gallery presents a season of four one-month exhibitions devoted to Conceptual Art made in Britain during the 60s and 70s.

The final exhibition of the season brings together two artists: Ed Herring, a land artist who first gained attention in the 1960s for his ‘environmental statements’; and Roger Palmer, who combines photograph and text to subvert the traditional view of landscape.

In 1970, Ed Herring took his lunch, a wrapped sandwich and an apple, and very specifically measured and documented its overall dimensions. This emphasis on recording and documenting his findings preoccupied his work for decades: whether it be the rate of replenishing squares of bird seed as it was devoured by animals (Bird Grid, 1969); measuring the rate of condensation and evaporation of filled plastic bags of water with teabags nailed to a tree (Tea-Tree, 1968-69); or measuring the quantities of oil absorbed by the earth via an array of implanted tubes (Oiled Earth, 1969). These subtle forms of intervention questioned consumption, creation and cultural responsibilities involved in their making, and are deeply rooted in ecological and environmental concerns.

Roger Palmer’s work interrogates “that peculiar practice that many westerners seem to have adopted as a means of acquainting themselves with unfamiliar places, the habit of collecting your personal memories through photography or filmmaking”. He examines how our reading of images changes according to context and accompanying information: in a pair of photographs titled Cloud Falling - A Ridge on Birreencorragh (1977) the viewpoint is very clearly different, altered by the movement of the artist as well as the movement of clouds, yet from the overlaid text we infer it is the same scene.

This final exhibition in the series illustrates the forgotten history of Conceptual art in Britain, bringing to the forefront works by two undervalued and under-recognised artists, who irrevocably changed our concept of the traditions of modern art.

Ed Herring's best-known work of the 60s and 70s used photography and documentation to record environmental statements made in primarily unpopulated areas. His later work used combinations of language and images to construct, deconstruct, elucidate and debate the idea, signification and consumption of art and culture. He collaborated and exhibited with many conceptual artists at the time, such as Keith Arnatt, Terry Atkinson, Victor Burgin, Joseph Kosuth and John Stezaker.

Ed Herring has exhibited regularly at Camden Art Centre, notably taking over the garden during the seminal exhibition Environment Reversals (1969), and later exhibiting in Charles Harrison’s Idea Structures (1970) and the Paris Biennale (1971).

Based in Glasgow and working as an artist and educator since the 1970s, Roger Palmer’s research and practice have contributed to debates on the representation of place, as well as ideas of location and dislocation, migration and settlement. The artist has pursued a multi-media approach to image-making through photography, printmaking, wall-drawing and video. He has also made text works such as site-specific signs, billboards, neon sculptures, LED panels, vinyls, temporary paintings and drawings.

‘Some Dimensions of my Lunch’ Exhibition Programme

Some Dimensions of My Lunch: Conceptual Art in Britain (1956 – 1979) at Richard Saltoun Gallery will feature important work by many of the famous protagonists of the period: Roelof LOUW, Marie YATES, John LATHAM, Tony MORGAN, John BLAKE, Ed HERRING, Roger PALMER.

This four-part exhibition, co-curated by Joy Sleeman and Richard Saltoun, has taken over three years to organise. Much of the work is either being shown for the first time or not seen since it was first exhibited.

A Reader in Art History and Theory at UCL Slade School of Fine Art, her internationally recognised research is focused on the histories of sculpture and landscape, especially 1960s land art. In 2013-14 she co-curated the most comprehensive exhibition of British land art to date, Uncommon Ground: Land Art in Britain 1966-1979. Current projects include a book on the sculpture of Roelof Louw (Ridinghouse) and advisor to an exhibition on David Lamelas in Long Beach, California, USA.