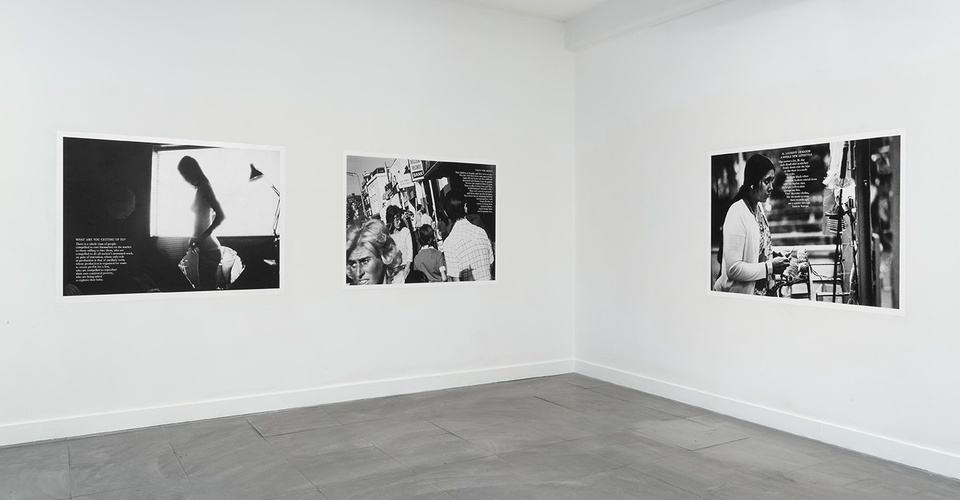 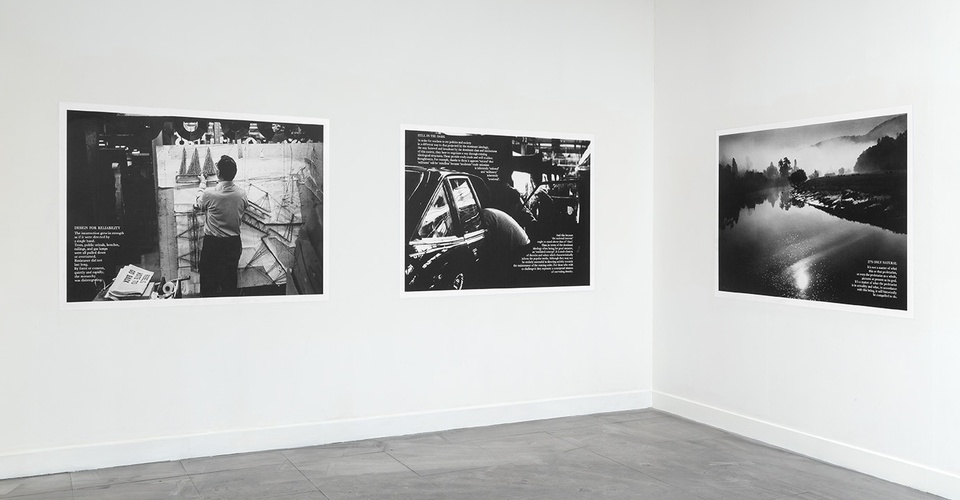 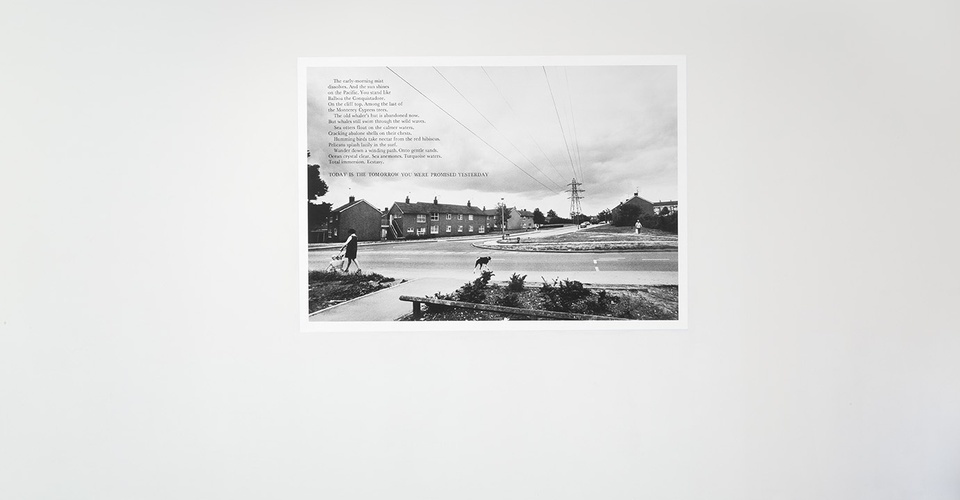 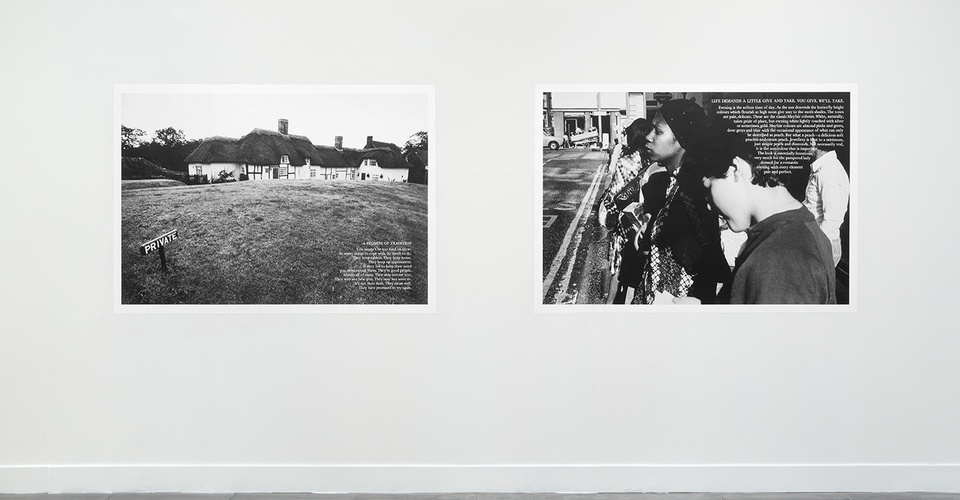 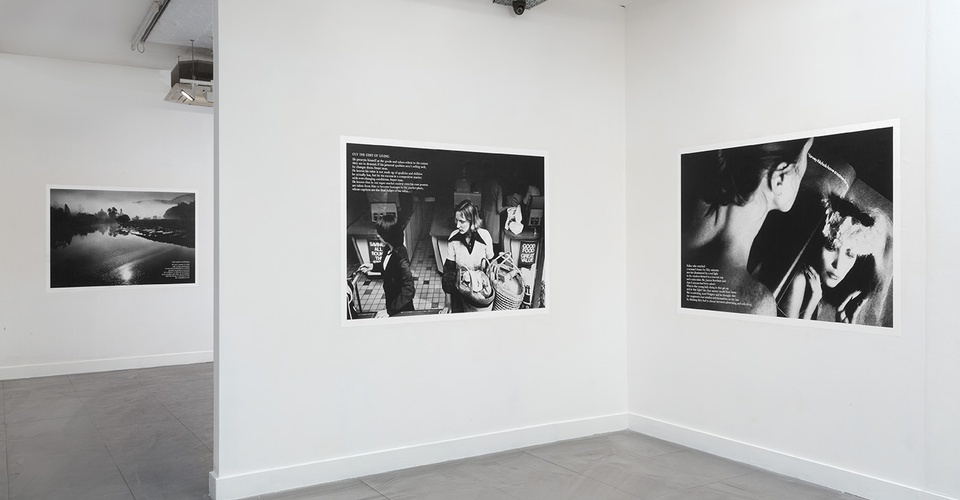 The year 2016 is the 40th anniversary of Victor BURGIN's seminal photo-text series UK76. To mark the occasion Richard Saltoun Gallery will present the work in its entirety and in the form in which Burgin's works of the 1960s and '70s were originally shown: pasted directly to the wall and scraped off at the end of the exhibition.

1976 was the year in which prime minister Harold Wilson resigned; inflation touched 24%; the Chancellor of the Exchequer negotiated a £2.3 billion loan from the International Monetary Fund; and the Punk rock band the Sex Pistols released their debut single Anarchy in the U.K. Emerging from this historic period of economic and societal change UK76 has come to be recognized as the most succinct ideological snapshot of British society of the time.

UK76 comprises eleven large photographic prints (each 1 metre high by 1.5 metres in width) overlaid with text. The photographs were originally commissioned from Burgin by the National Community Development Project and Coventry workshop. Burgin subsequently added short texts and captions 'reversed out' over the photographs in ironic reference to fashion magazine spreads. Much of the language of the texts derives from such journals and from British newspapers and advertisements of the day. Burgin's articulation of the style of 'socially concerned' documentary photography together with graphic and rhetorical conventions from mass media was anathema both to the social documentarists of the day and to the proponents of 'art photography'. In addition to its gesture to the street, his practice of postering his works for exhibition staged both the transitoriness of the world 'caught' in snapshots and a rejection of their repurposing as commodities.

Victor Burgin first came to prominence in the late 1960s as one of the originators of Conceptual Art. His work appeared in such key exhibitions as Harald Szeemann's Live in Your Head: When Attitudes Become Form (1969) at the ICA London, and Kynaston McShine's Information (1970) at MoMA, New York. He has since remained one of the most consistently influential artists and art theorists of his generation.

Burgin graduated from the School of Painting at the Royal College of Art, London, in 1965, where he was introduced to philosophy by Iris Murdoch. He then went on to study Philosophy and Fine Art at Yale University School of Art and Architecture, where his teachers included Robert Morris and Donald Judd. On his return to the UK in 1967 his reading of Roland Barthes' seminal text Elements of Semiology led to his subsequent sustained engagement, in his artworks and writings, with the complex interdepencies of words and images.

Burgin has said he is interested in the 'camera image' rather than 'photography' as such, which he sees as a contingent historical stage in the history of Western perspectival representation. In his digital projection works of the past five years he has worked exclusively with virtual cameras in the space of 3D computer modelling (the most recent implementation of perspective). His primary concern however remains what is at the time of UK76: the primacy of the image - simultaneously optical, textual, and psychological - in our recreation of the real.

Burgin is Professor Emeritus of History of Consciousness at the University of California, Santa Cruz and Emeritus Millard Chair of Fine Art at Goldsmiths College, London. During 2015 he has been a Mellon Fellow and Visiting Professor in the Department of Cinema and Media Studies at the University of Chicago, where he is producing a new work "Prairie" for the Chicago Architecture Biennial. The most recent major retrospective of his work was held at the Museum für Gegenwartskunst Siegen, Germany, in 2014. The next exhibition of his work in the UK will open at the John Hansard Gallery, Southampton, in February 2016.