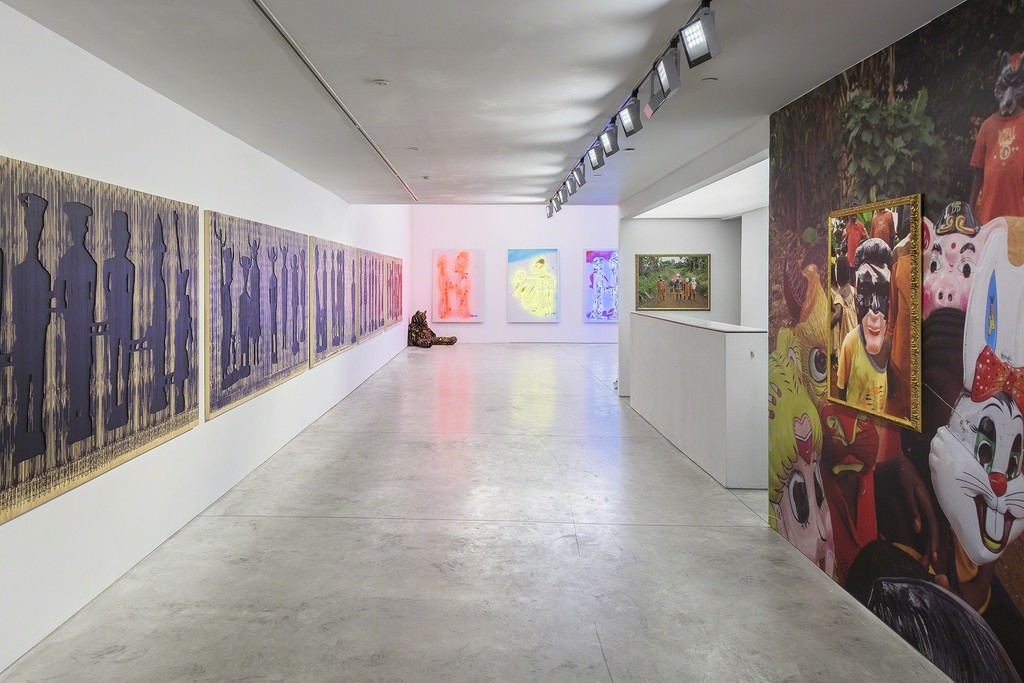 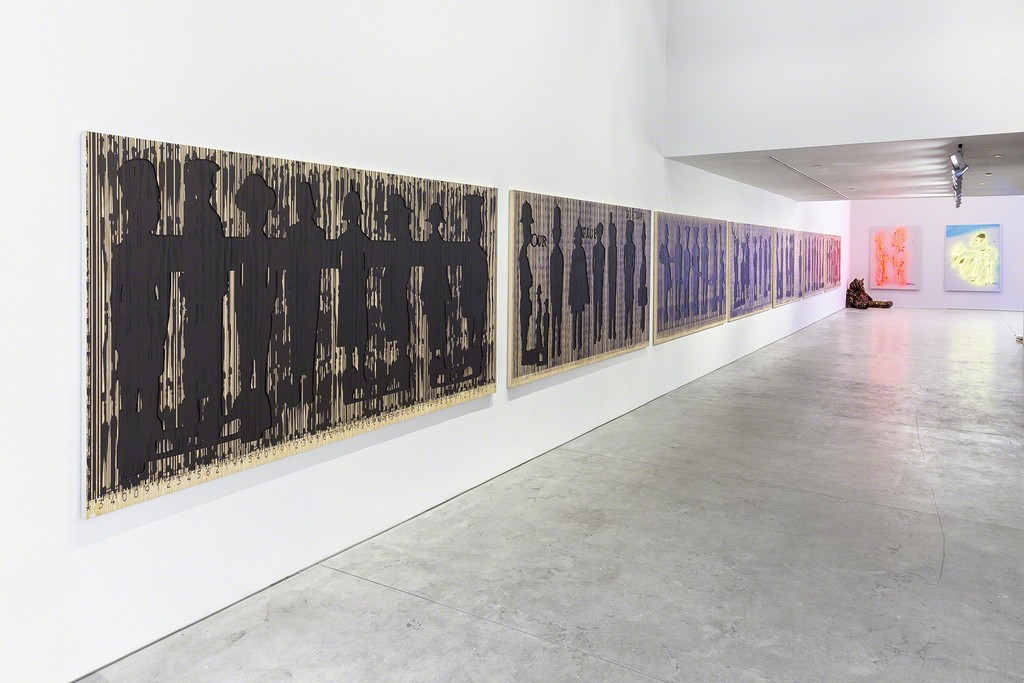 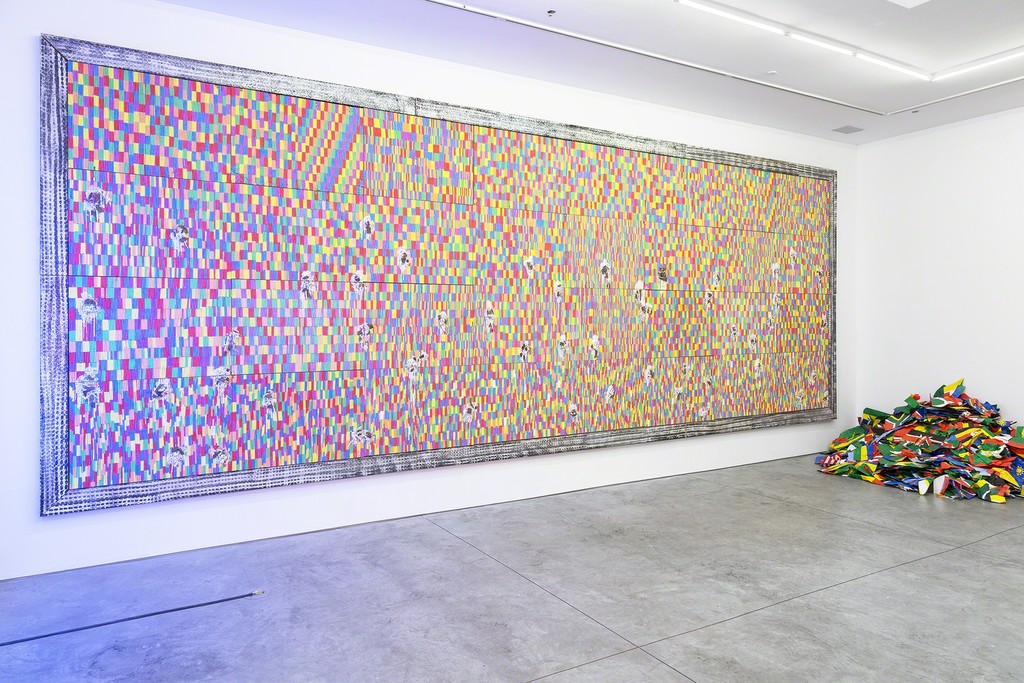 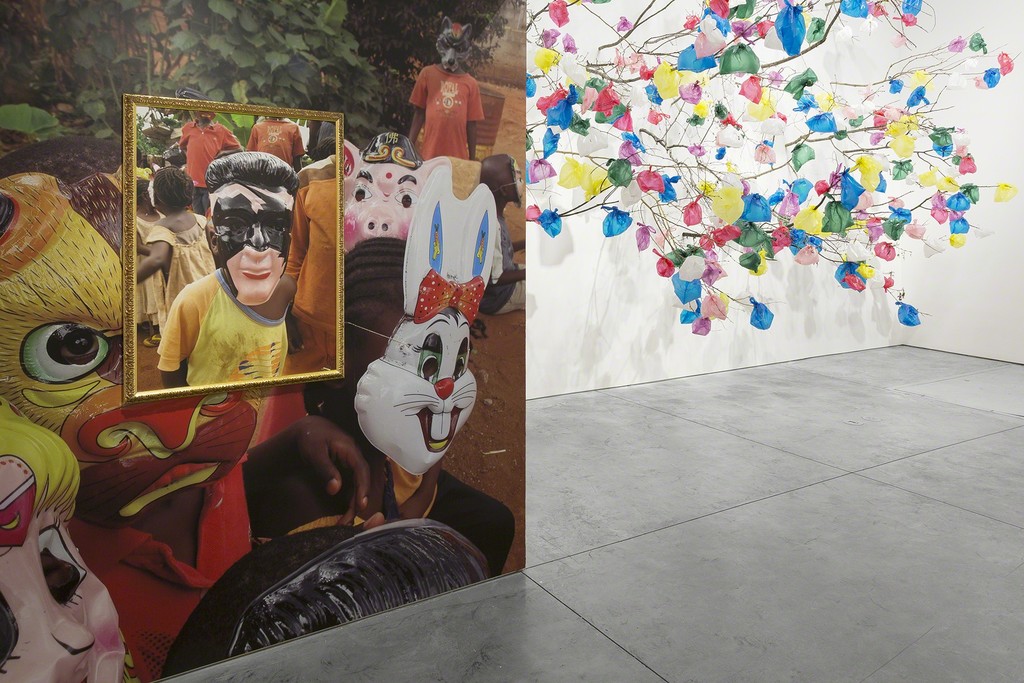 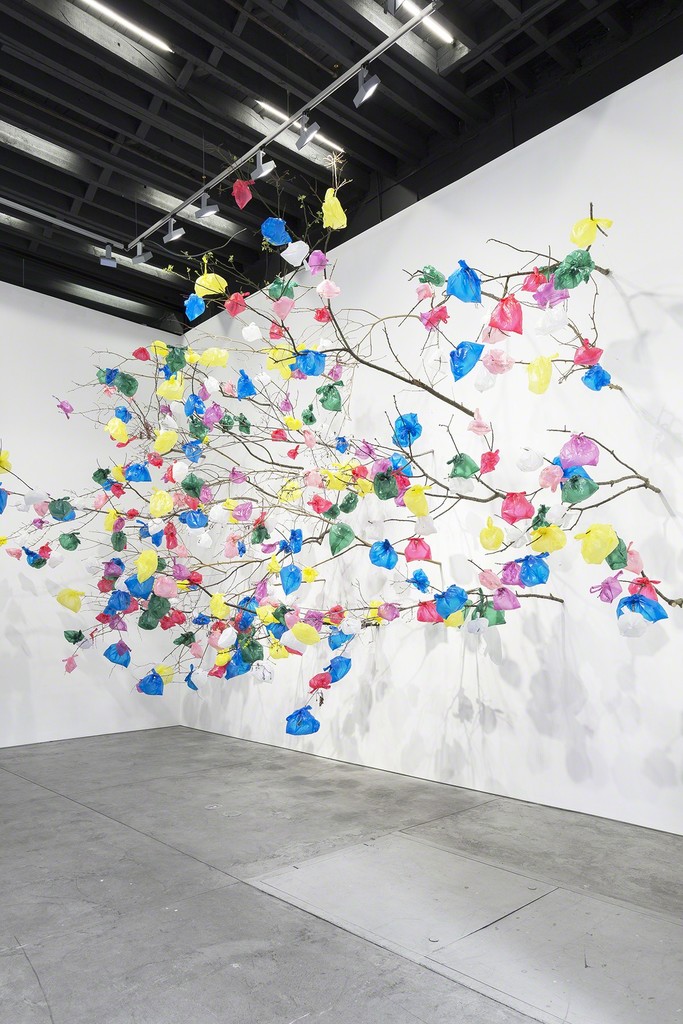 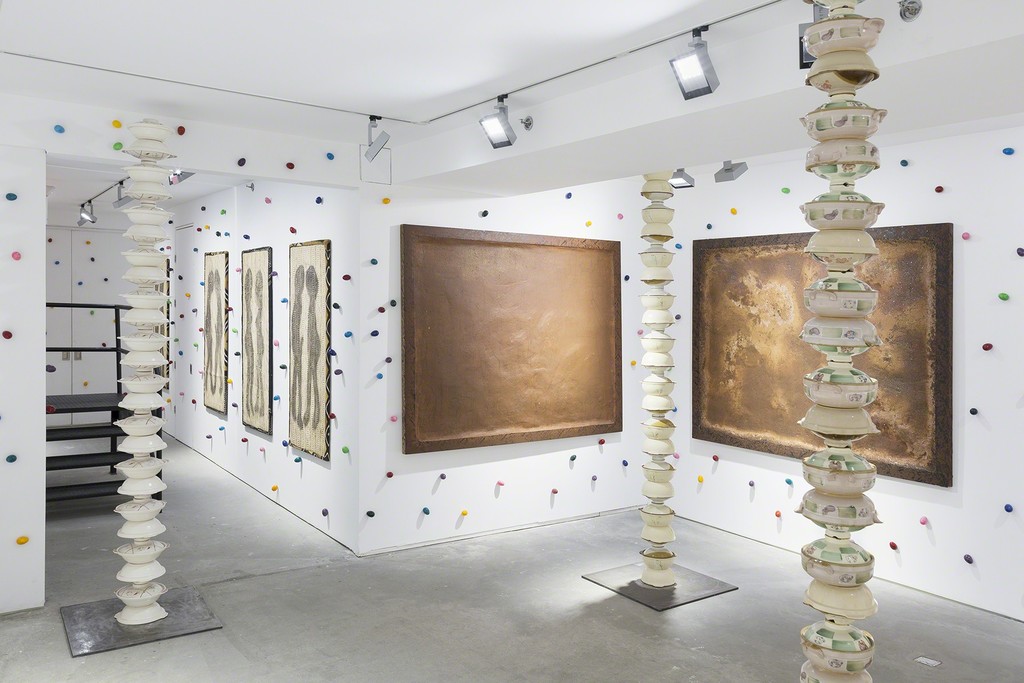 RICHARD TAITTINGER GALLERY is excited to present Colorful Line, a solo exhibition of works by the acclaimed Cameroonian artist Pascale Marthine Tayou, curated by Jérôme Sans in
collaboration with GALLERIA CONTINUA, San Gimignano / Beijing / Les Moulins / Habana. This is the most ambitious and comprehensive exhibition of Pascale Marthine Tayou’s work in the United States, and includes a range of artworks from 2006 through 2018.
The exhibition Colorful Line has been conceived as a journey within Tayou’s universe: a deliberately mobile, heterogeneous work. Deeply linked to his own "voyager mind", Tayou’s work comes into contact with what is other to the self. His objects, sculptures, installations, drawings and videos have a recurrent feature in common: they dwell upon an individual moving through the world and exploring the issue of global village.
Pascale Marthine Tayou has created his own vocabulary out of images and forms from the West and beyond: from society’s rejects and waste, national and economic symbols, and artistic references. Tayou expresses himself with simple materials, as a lush "anti-production" of the Western worlds. He embraces the world’s connected realities, bringing together non-tangible impressions and materials, fragments of moments he collects from the succession of places he inhabits, whether for an hour or for ten years.
The title comments on the continuing problem of racial discrimination in the United States and of these cultural associations as well as the reference of color, something that crosses throughout Tayou’s work; “Color Line” was originally used as a reference to the racial segregation after the abolition of slavery. Tayou acknowledges this past and present in the monumental, seven-panel work titled Code Noir, newly produced for this exhibition. At about 70 feet in length, the panels show the silhouettes of people painted black, with a black barcode printed on top of them. This alludes to both the “Code Noir”, or slave code, which was a decree originally passed by France’s King Louis XIV in 1685 defining the conditions of slavery in the French colonial empire, and the Black Codes passed by the Southern states in the United States in 1865 and 1866 after the American Civil War, restricting African Americans’ freedom.
This exhibition features a range of artworks, some produced specifically for this show, including Bogo Bear, a huge Teddy Bear dressed in Bogolan textiles (Bogolan fabrics hold cultural significance, strength, and energy, as they are typically worn by hunters and women newly initiated into adulthood), and a new series of neon works. Mixed in with new works are some of Tayou’s iconic pieces, including the enormous Plastic Tree. Composed of different colored plastic bags, this material of choice is significant, as Tayou has explained that it’s “always in transit, always global. It crosses borders, and isn’t reserved for one social class.” Other works include a number of Poupées Pascale pieces, whose stylized naïve face carvings adorned in simple household objects such as leather samples and buttons, evoke Western tourist souvenir gifts through the crystal they’re made of, and Jpegafrica/Africagift, a pyramid pile of the 54 African flags, used as a sculptural metaphor of the different cultural identities of the African continent.
ABOUT THE ARTIST
Pascale Marthine Tayou (b. 1966) lives and works in both Ghent, Belgium and Yaoundé, Cameroon. Tayou has participated in many renowned international exhibitions, including Documenta 11 in 2002 and the Venice Biennale in 2005 and 2009. His work is currently being exhibited at The Bass Museum of Art in Miami, Florida. Recent solo exhibitions include GALLERIA CONTINUA, France in 2017; the Fowler Museum at UCLA, Los Angeles in 2014; Kunsthaus Bregenz, Austria in 2014; Galerie Cécile Fakhoury, Abidjan, Cameroon in 2014; MARCO, Rome, Italy in 2012; REVURE NOIR Expressions Contemporaines d’Afrique et du Monde Paris, France in 2011. His work is featured in the collections of the ARKEN Museum for Moderne Kunst, Denmark; the Bandjoun Station, Bandjoun, Cameroon; the Centre Pompidou, Paris, France; the Kunsthaus Bregenz, Austria; SMAK, Stedelijk Museum voor Actuele Kunst, Belgium.
ABOUT THE CURATOR
Internationally renowned curator, art critic, art director and museum director Jérôme Sans has a strong friendship with Pascale Marthine Tayou, as they met in 1998 at the Sydney Biennale, and have since collaborated together on numerous projects. Jérôme was the co-founder and director of the Palais de Tokyo in Paris until 2006, and from 2008 to 2012, he was the director of the Ullens Center for Contemporary Art in Beijing (UCCA). He has curated many international exhibitions, including the Taipei Biennale (2000), the Contemporary Art Biennial of Lyon (2005), the Nuit Blanche in Paris (2006), and the Milan Triennial (2010). He is involved as artistic director in several major urban projects, such as the Rives de Saône-River Movie in Lyon, and was recently appointed as director of the future cultural pole of the Ile Seguin in the greater Paris region. He also jointly co-founded Perfect Crossovers in Beijing, a consultancy group for cultural projects between China and the rest of the world.