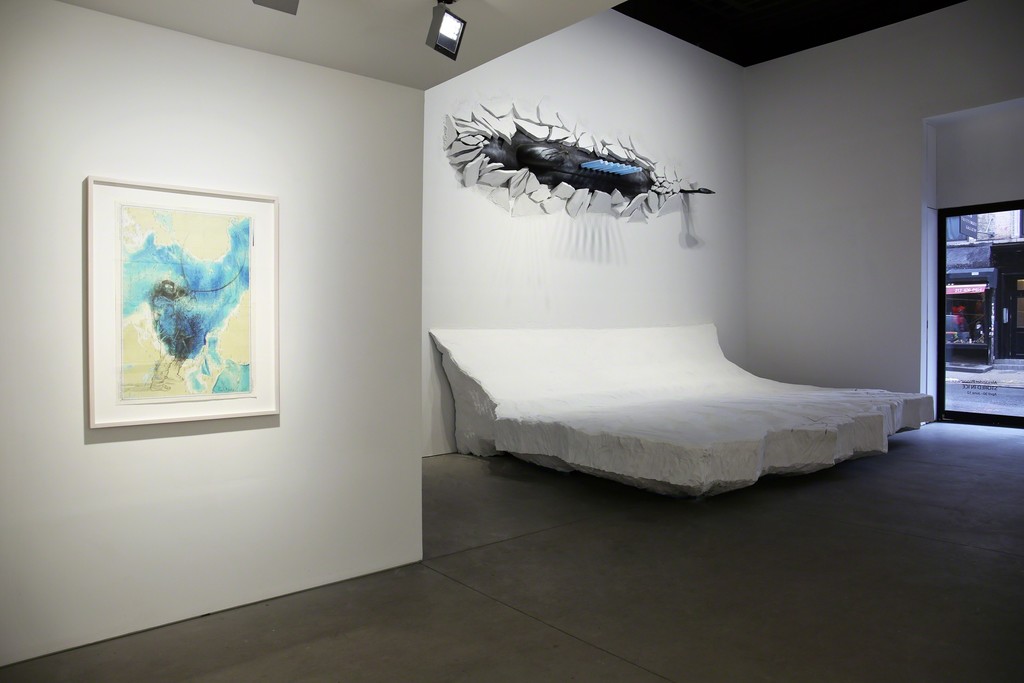 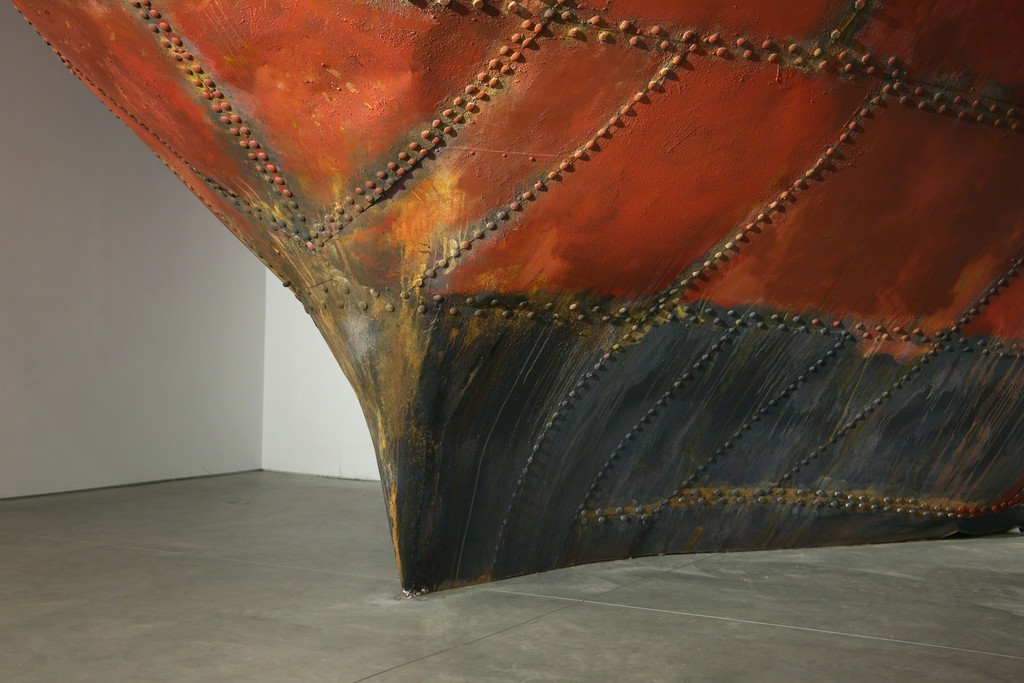 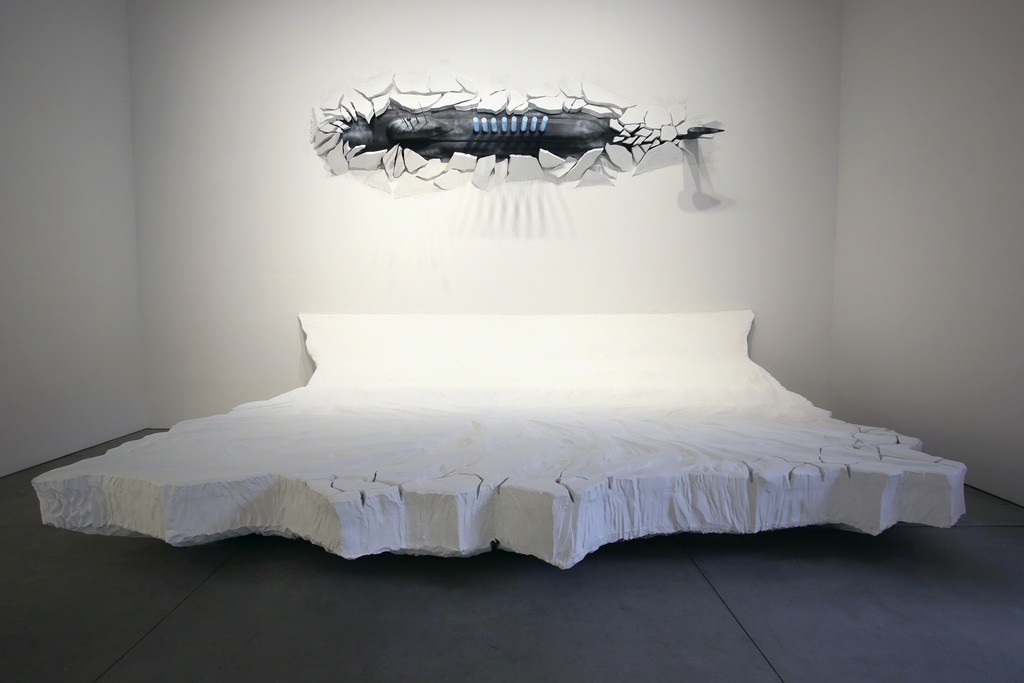 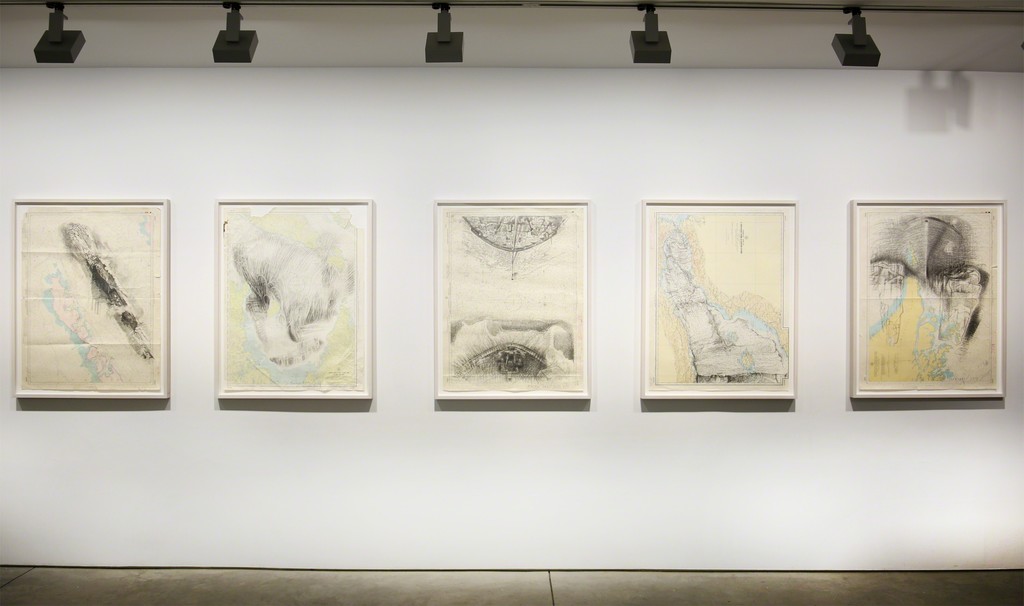 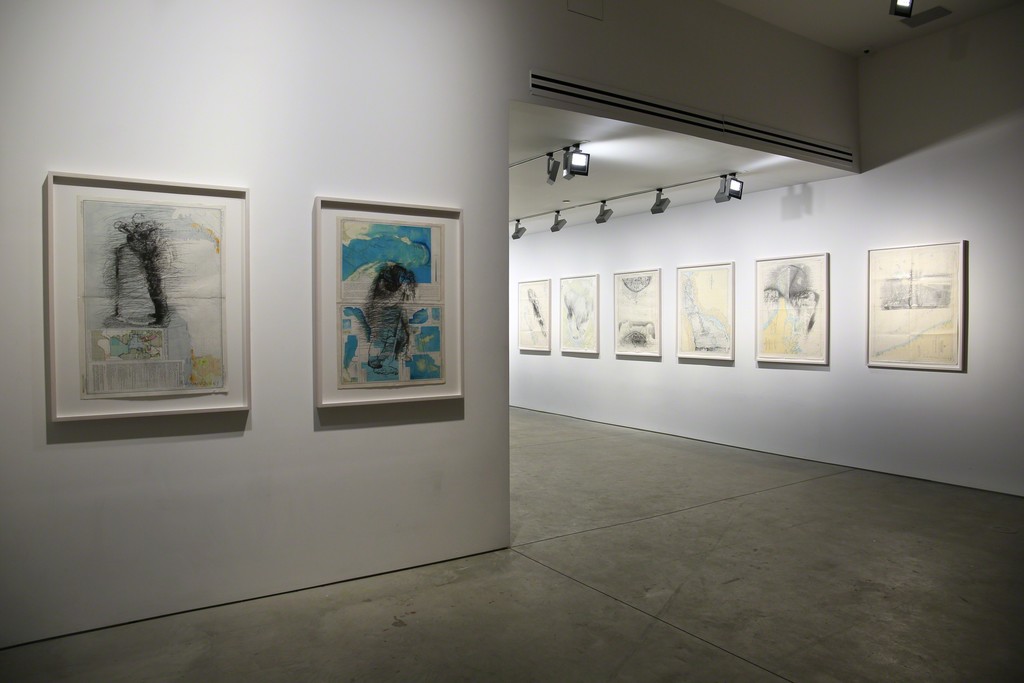 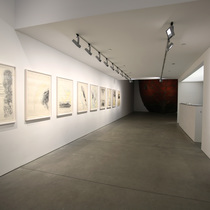 Richard Taittinger Gallery is proud to present Stored in Ice, a solo exhibition by the Russian artist Alexander Ponomarev (b. 1957). Showing both large-scale instal- lations and works on paper, Stored in Ice, examines the artist’s lifelong research and quest for preserving cultural memory within the unde ned terrains of the Antarctic Circle. Ponomarev’s actions unfold in remote places of the sea, nurturing his continuous curiosity and ways of deepening the connection between humanity and earth. This show also serves as a prelude for the artist’s forthcoming institutional endeavor the 1st Antarctic Biennale.

The installations, Stored in Ice and Icebreaker, as well as drawings created on navigational maps, challenge notions of boarders and open territories existing within oceanic environments. Considering the sea as his primary medium, Ponomarev’s inspiration is drawn from the memory stored in water, or in cylinder-shaped ice cores containing layers of the earth’s physical and chemical properties from millions of years ago. Experimenting with notions of loss and recollection, Ponomarev proposes to preserve and transport the universe’s cultural memory in a similar manner that vestiges of the earth are deposited in the deep ocean. The Submarine Boat, holding the transparent tubes, serves as both a metaphor and vehicle for receiving, transporting and preserving evidence of civilization. Exploring the ocean’s space, the large-scale Icebreaker installation conveys the bow’s powerful motion navigating through unknown territories. The pointed form embodies a sense of movement, symbolizing the artist’s upcoming voyage to Antarctica, where he will unveil the 1st Antarctic Biennale. As the commissioner of this unique event, Ponomarev will invite artists, scientists and other practitioners to create new ways of approaching life on our planet, and explore the universal cultural future of Antarctica through an institutional lens.

Ponomarev’s vision foregrounds the physical rigor and immeasurable dimensions of the ocean. In this way, the artist’s work reflects his own past as a submariner and engineer, while also demons- trating his multiple artistic practices. Merging his professions together, the works on paper depict natural elements, such as glaciers, which at times are intertwined with different nautical equipment. The detailed depictions of the machinery indicate his architectural expressions and penchant for structure and spatial mobility. Ponomarev’s combination of aerial and frontal perspectives conjure an illusion as though a three-dimensional form is cutting the surface of the paper, mirroring the submarine piercing through the frozen, deep water. The exhibition Stored in Ice alludes to the artist’s nomadic lifestyle, permitting him complete autonomy to work in the open water, or as he calls it ‘‘his studio.’’ His extensive voyages, as both a sailor and artist, link Ponomarev to a long legacy of Russian Modernism, particularly to Vladimir Tatlin, who was a sailor himself. His expeditions in the ocean evoke the notion of moving forward, which bears simila- rities to Tatlin’s ambitious Tower structure, and his desire to combine art and technology.

Ponomarev’s works can be considered an extension of land art, or rather ‘‘sea art,’’ where he uses the physicality of the machine as a means to penetrate the space of the ocean. His continuous commitment to investigating unfamiliar places resulted in the energetic outcome of Ponomarev’s 1st Antarctic Biennale, launching in Spring 2017. Since the Antarctic Treaty (1959), working in this region is intended exclusively for creative activities and scienti c research in the interest of all of humanity. For Ponomarev, this is a fundamental project, through which he will further his research in this enigmatic and futuristic place that is open to endless possibilities and discoveries. Stored in Ice will be on view through June 12.

ABOUT ALEXANDER PONOMAREV
Alexander Ponomarev was born in Odessa, Ukraine (former Soviet Union) in 1957. In 1973 he graduated from the Art School of Orel, and in 1979 completed his studies in USSR Nautical Engineering College. As a multidisciplinary artist, he is known for his numerous installations, and performances. In 2007, he was named an Officer des Arts et des Lettres by France's Minister of Culture. His passionate, innovative and forward-thinking activities granted him the 2014 Foreign Policy's Global Thinkers award.