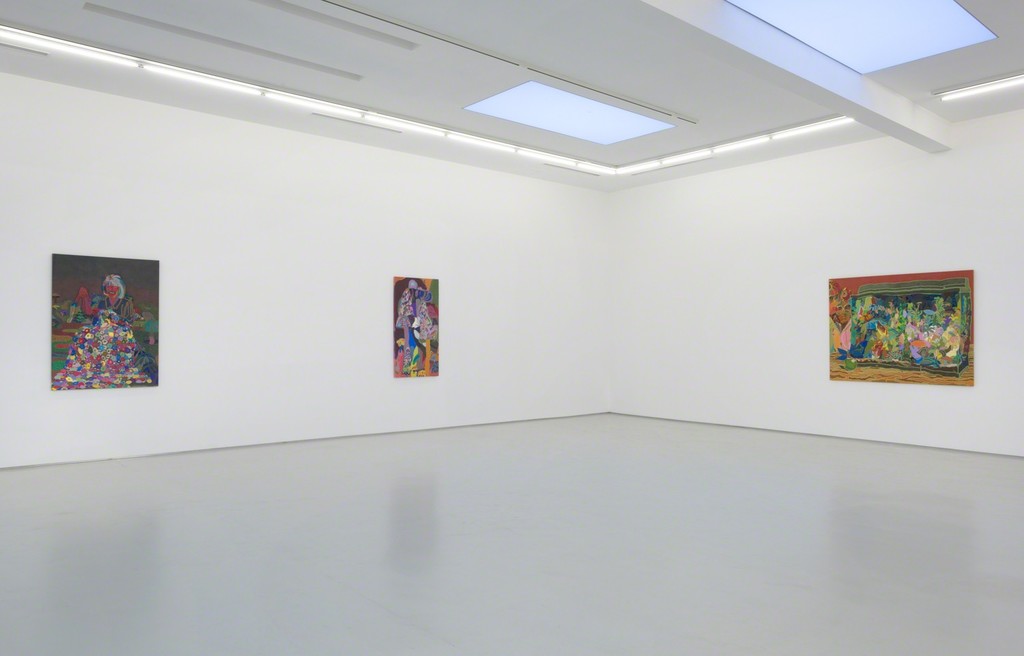 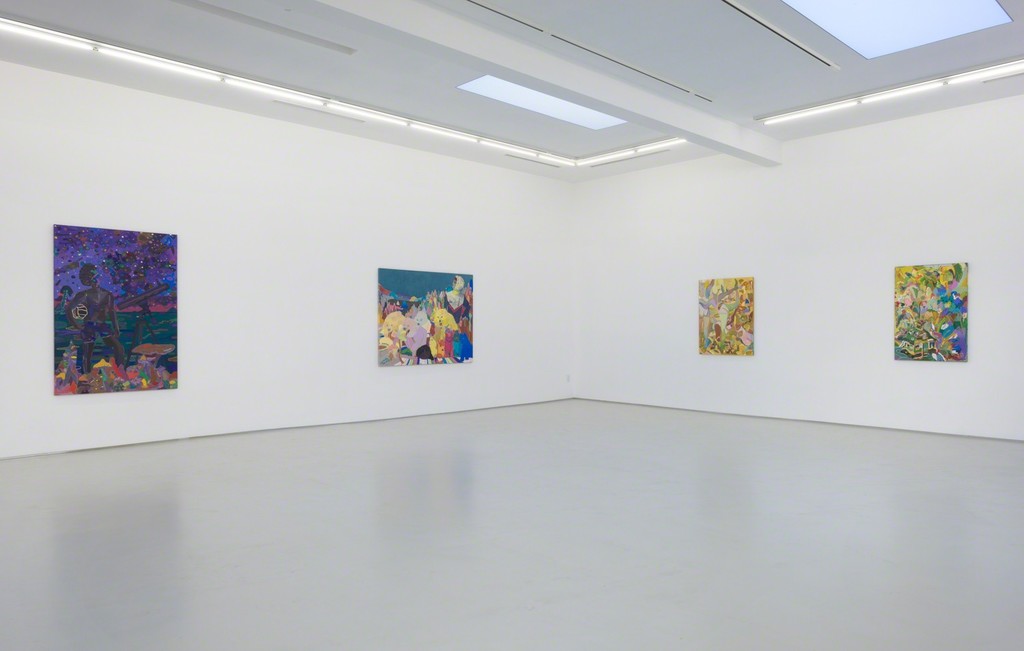 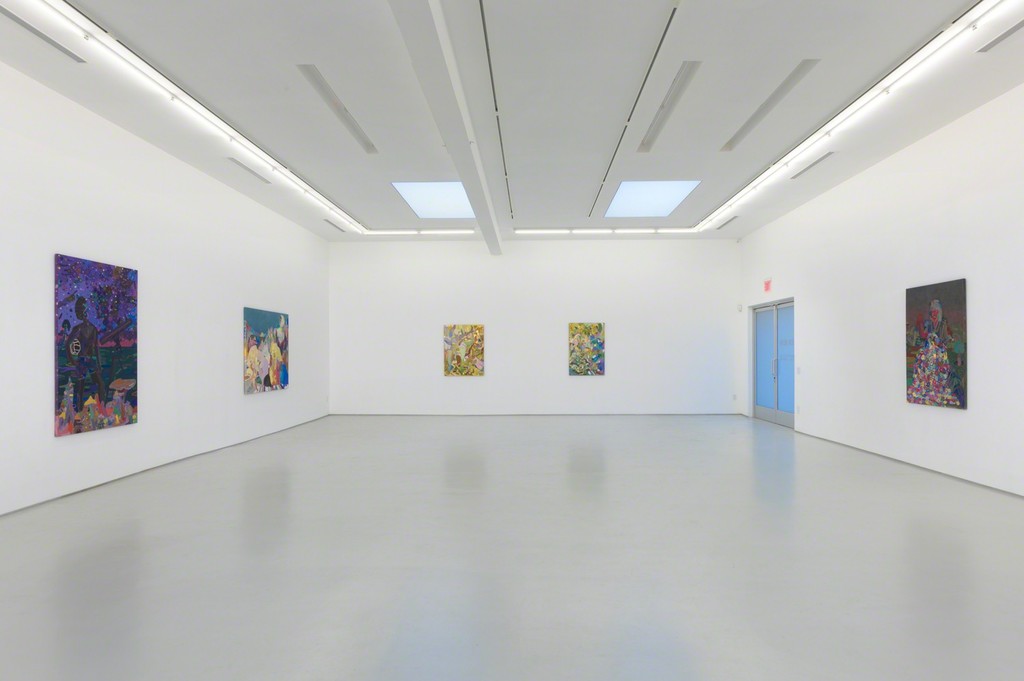 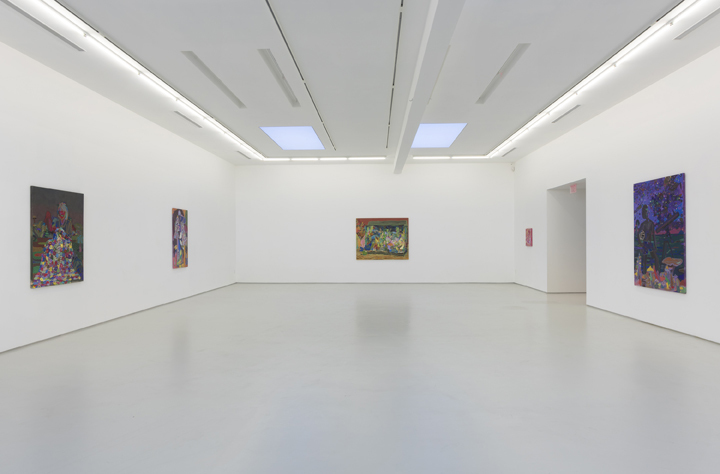 Roberts & Tilton is pleased to present Spare Time, a survey of new paintings by Leon Benn exploring the constructions of and within the natural world through the lens of ritualized leisure.

Benn’s paintings are inhabited by participants, either person or animal, engaging in pleasurable activities within hallucinatory environments. Familiar recreational hobbies including quilting, stargazing, dance, the pastoral weekend retreat are depicted joyfully. Through a range of activities performed outdoors, or in conjunction with nature, the gestures resonate with quiet contemplation on nature’s beauty without losing sight of our fragile co-dependence. If the idea of the conventional hobby seems to augment the psychological specter of the figure in relation to a viewer, here enjoyment is derived from a balance between recognition and surprise; total recognition is cliché; total surprise is alienating.

The resulting enigmatic still lifes’ encompass veins of both abstraction and figuration, where neither the body or nature is depicted realistically but instead cryptically as graphic patterns. In the negation of classical portraiture, the figures become interchangeable with the landscape they reside in, tightly captured in swirling strokes, Fauvist color schemes, and exaggerated forms.

The surfaces are slowly built up through varying layers, dimensions, demands. Benn starts his paintings by selecting canvas, which he then treats and hand dyes prior to starting batik applied through a water-based resist. Drawings utilizing oil pastels breaches the structure left from the underlying batik motif. The results are phantasmagoric paint-scapes that explore imagistic transference of natural imagery to a static commercial medium.

The portrayal of clumsy hobbies implies a lack of rigid seriousness, even inelegance, when viewed under the guise of ‘expertness’. In the increasingly professionalization of art production, craft is regulated to the same realm of the hobbyist; i.e. the undesirable, the regional, the nonintellectual. Yet leisurely acts are radical acts, in that they disrupt of contemporary societal needs and its resulting frustrations. As an instrument for personal expression and sorting through the experiential of the natural world, the pursuit of hobbies implies that desire and effort produces results. Hobbies remain self-determined and self-discovered. They allude to private moments, inhabiting paradoxically a space of both engagement and repose. Wielded as emotional and physical tools to maneuver through the ellipses and tempos of our surrounding environment, they allow for a meditation on the flexibility of ideas, and fluidity of processes.

The resulting narrative compositions, based on both direct observation and invention, explore the concept of time, space and the role of subjectivity in navigating the temporal quotidian experience of life.

For additional details, please contact Camille Weiner, 323.549.0223 [email protected]
Gallery hours are Tuesday – Saturday, 11:00am – 6:00pm.
Roberts & Tilton is located between Fairfax Avenue and La Cienega Boulevard.
Parking is available on the street and at Dunn Edwards located 1/2 block east of the gallery.