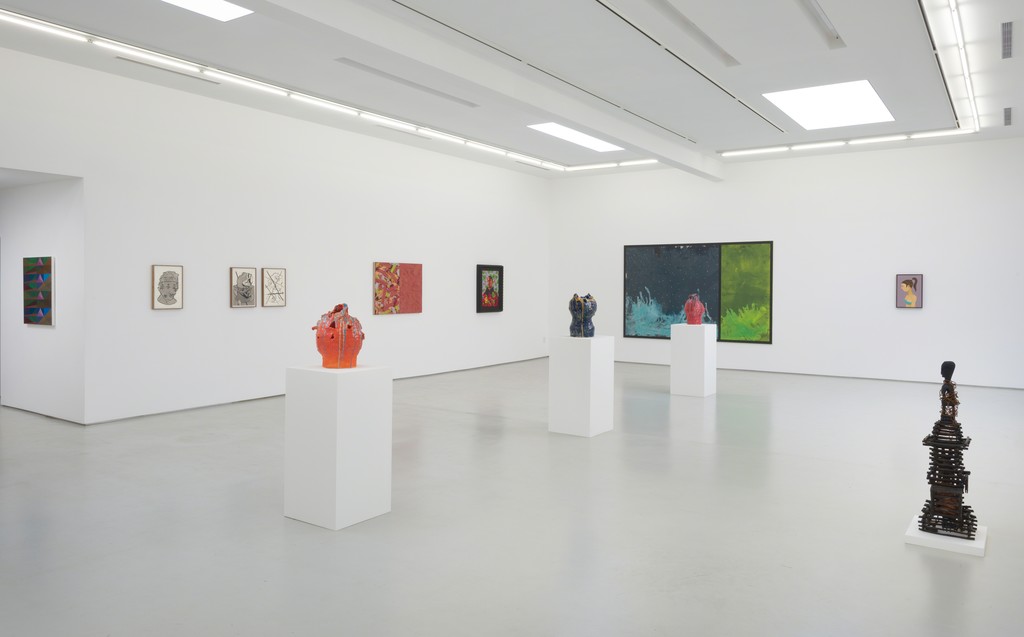 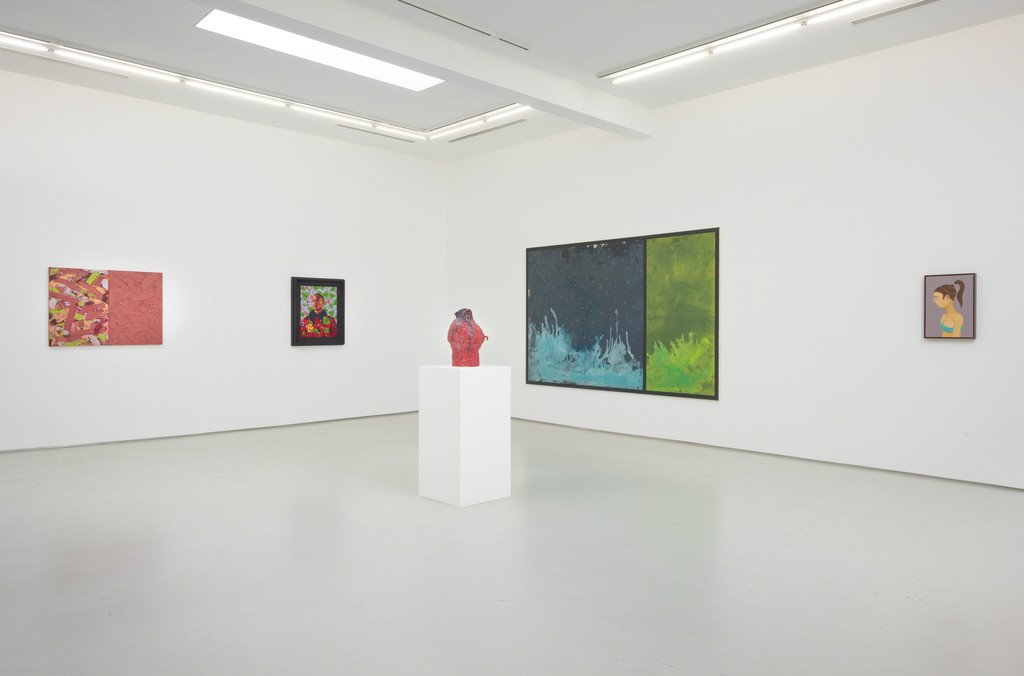 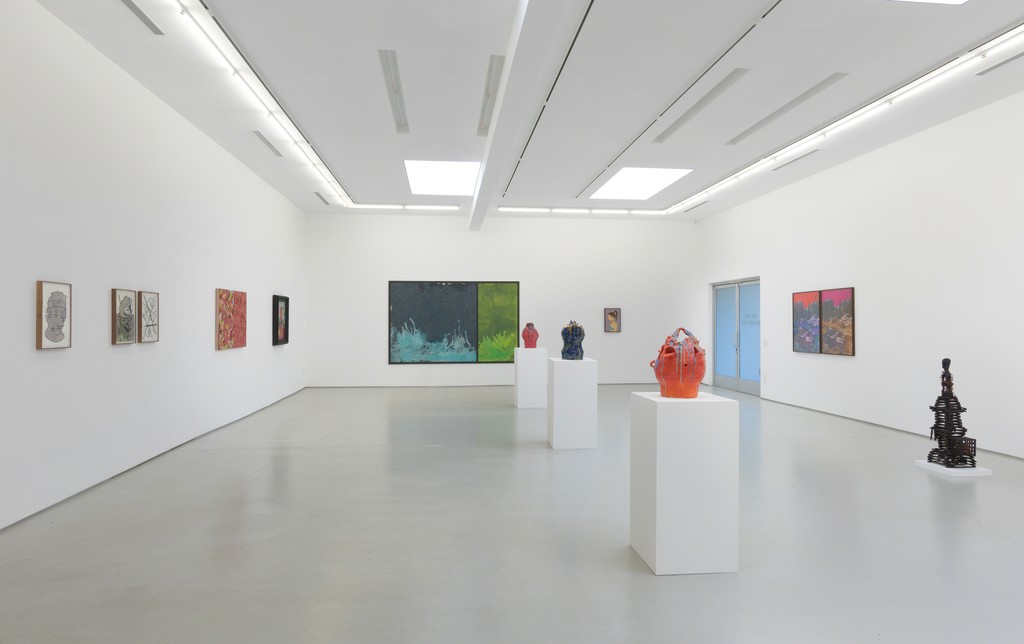 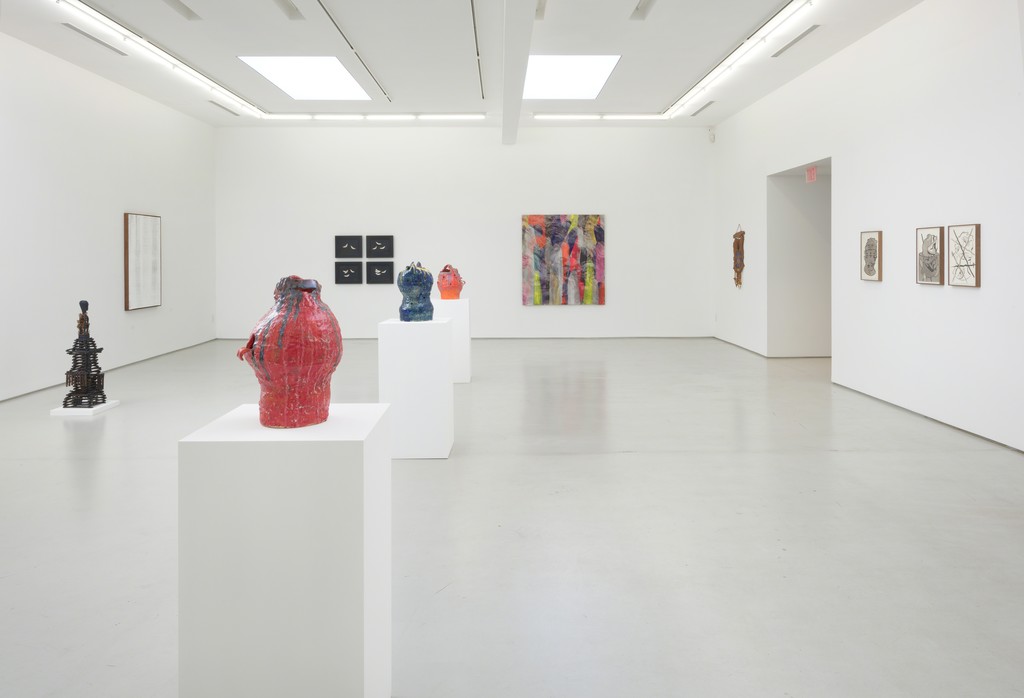 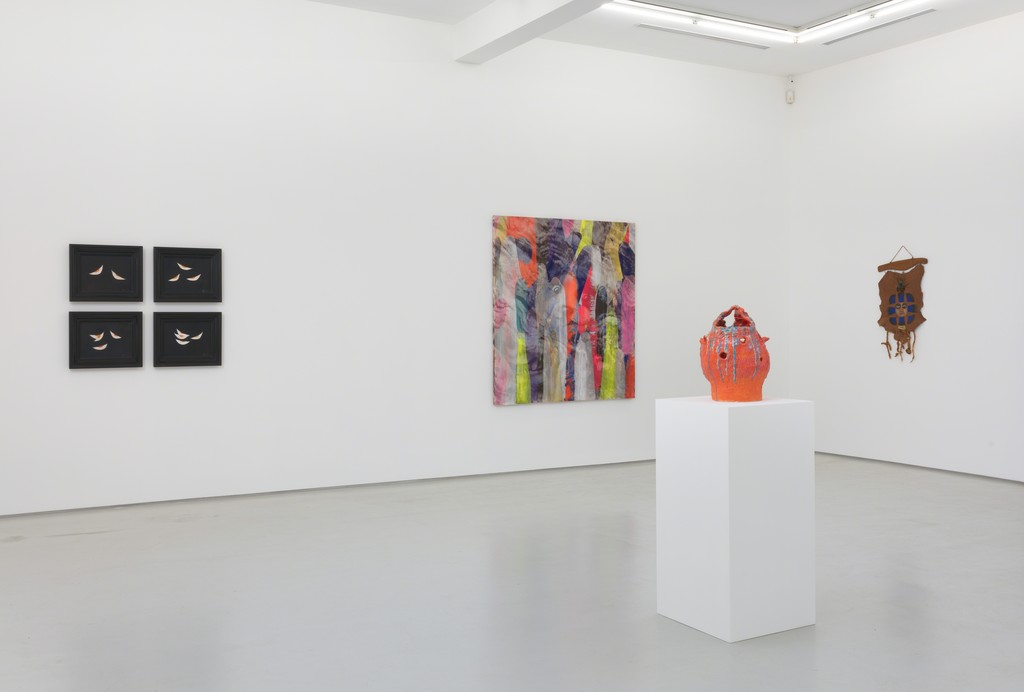 Roberts Projects (formerly Roberts & Tilton) presents One Way Or Another, a group exhibition featuring artists whose work the gallery has championed through thematic group exhibitions as well as solo shows. This exhibition takes its title from the pure power pop of Blondie’s 1978 hit. The exhibition is comprised of works by Michael Dopp, Egan Frantz, Jeffrey Gibson, James Hayward, Evan Nesbit, Betye Saar, Ed Templeton, Evan Trine, Kehinde Wiley, and Zhao Zhao. The photographs, sculptures, paintings and films on view share a common approach of innovation. The similarities are less stylistic than intellectual.

Perceptual effect is amplified in Betye Saar’s sculptural works. Although her works include familiar material objects, they impart a sense of mystery. From the ordinary is created the extraordinary. Drawing upon the language of early Mississippian culture ceramic head “pots,” Gibson styles ghoulish domes that give voice to the complexities of American history by accessing a less prominent ceramics tradition. These “pots” are jars shaped like human heads, typically male, and the personages commonly appear to be deceased. Kehinde Wiley’s portraits represent a historical narrative of, and in defiance of, the exploitation of Eurocentric Art, which in turn raises issues - which transcend consideration of form -into varying social, political, and economic spheres.

Autobiography is inherent in these works. Evan Nesbit’s repurposed paintings, manipulated through non-studio processes and materials, are a diary of his emotional states at certain moments in his life. Evan Trine’s photographs are notable for his unique visual language as seen through the photograph’s rigor of repetition and form. Michael Dopp’s works on paper are capricious landscape fantasies unavailable to reality, mixing fragmented human figures with vernacular imagery. Egan Frantz’s painting pushes the invented sense of place further, depicting an atmosphere of lush landscapes and water dappled by natural light.

One of the few general characteristics of the artists in the show is how they relate their work to representational art, particularly movement. In Zhao Zhao’s masterful sequence of paintings, slices of salted duck eggs float across the surface of the canvas like a new kind of calligraphy, the clarity of the ink black background forming many horizons that nearly blend into one. James Hayward’s layered approach to painting underlies how he intervenes and acts upon the present. Each dip and peak highlighting how there is no certainty to be found on the painting’s surface but the paint itself.

One Way Or Another is accompanied by a screening of rare films, including:
Betye Saar
Colored Spade, 1971
Length: 1 minute, 19 seconds

Betye Saar’s 1971 film Colored Spade is an assemblage of American derogatory images gradually replaced with depictions of African American power and solidarity. The film explores Saar’s interest in deconstructing historical and political narratives through the use of symbolism within found imagery.

For this video artwork by Kehinde Wiley, seventeen young men were asked to smile unceasingly in front of a camera for one hour. Found on the streets of New York by the artist, they were subjected to a surprisingly difficult performance of endurance, emotion, and strain. Obligated to appear happy—at any cost—they stoically submit to this discomfort and humiliation, face after interchangeable face. When each man in the four video channels can no longer bear his grin, he is replaced by yet another of seventeen faces.

In October 2015, Zhao Zhao began his Project Taklamakan in Xinjiang, China. Two years later, Zhao Zhao reactivated the project by bringing a Bactrian camel from the Taklamakan Desert into an exhibitionary space. In this artwork, the camel lives in this highly modern space for ten days, accompanied by its keeper and both food and water troughs crafted in marble by the artist. When fed and domesticated, the camel‘s practical functionality gives way to an aesthetic visual reversal, giving it a new significance.

As of January 1, 2018, Roberts & Tilton is known as Roberts Projects. We are assuming this new name following the passing of our long-time partner and friend Jack Tilton. We are proud to have developed a seventeen+ year partnership that spans countless historically relevant exhibitions and an integrated gallery program of emerging artists as well as mid-career and renowned, international artists. Roberts Projects will continue this trajectory, and such the programming, artists and visionary nature of the gallery will remain the same.
Our mailing address and phone remain the same.
New website: robertsprojectsla.com New email: [email protected]
For additional information, please contact Camille Weiner: 323.549.0223, [email protected] Gallery hours are Tuesday – Saturday, 11:00am - 6:00pm.
Roberts Projects is located between Fairfax Avenue and La Cienega Boulevard.
Parking is available on the street and at Dunn Edwards located 1/2 block east of the gallery.