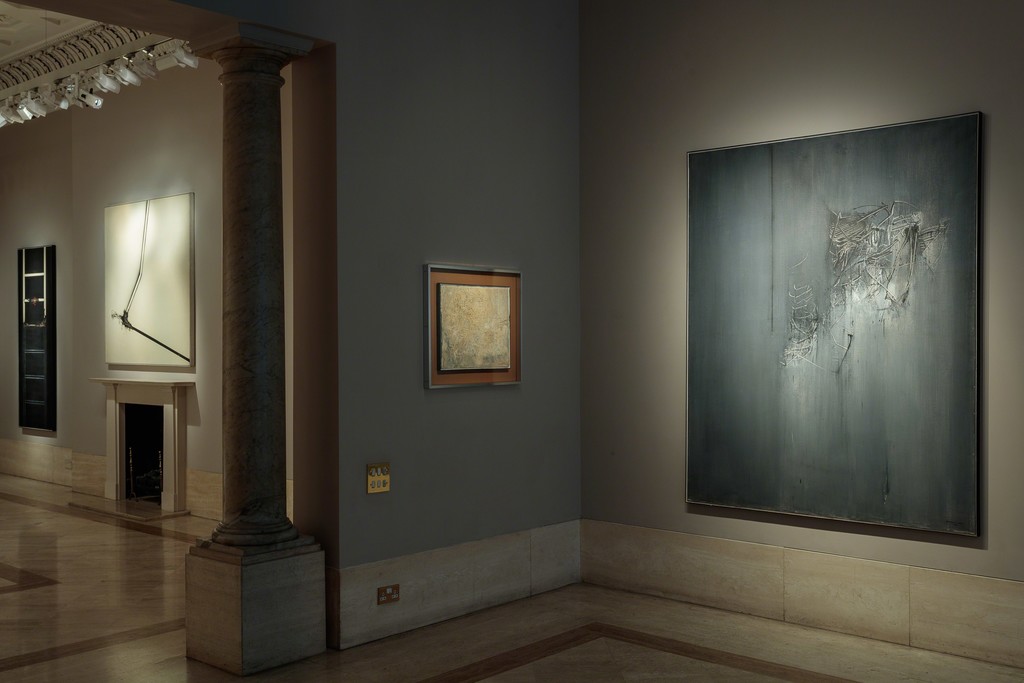 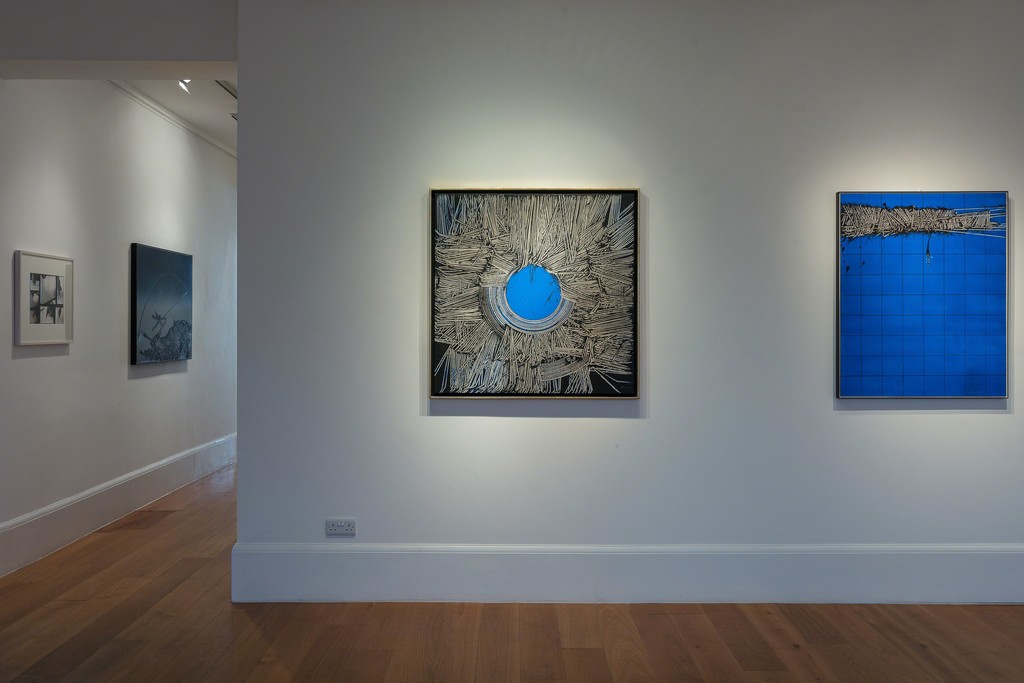 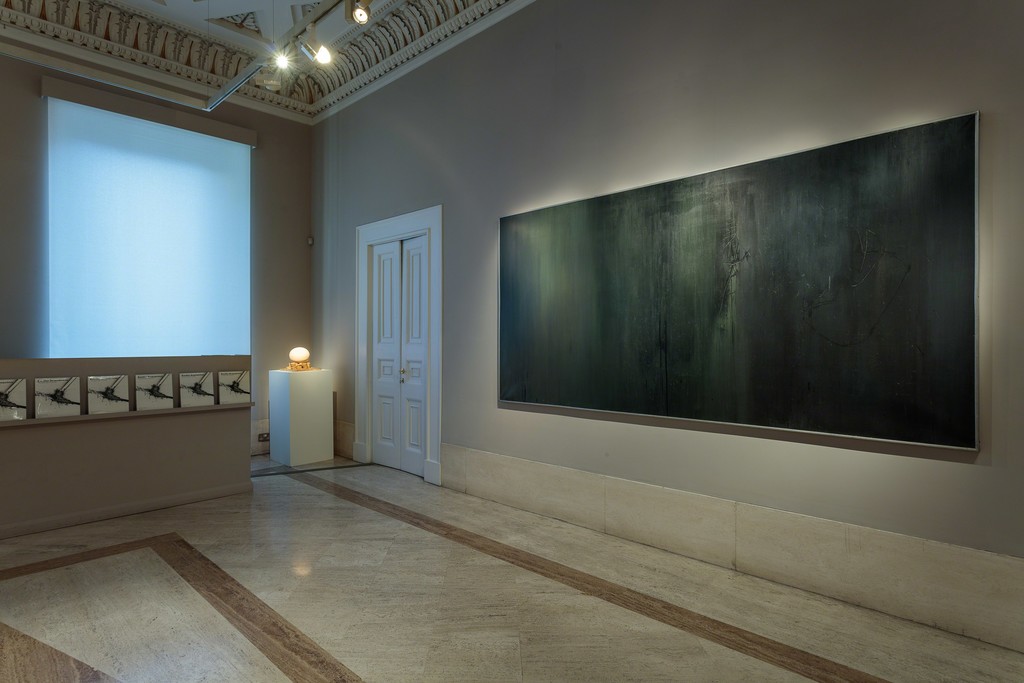 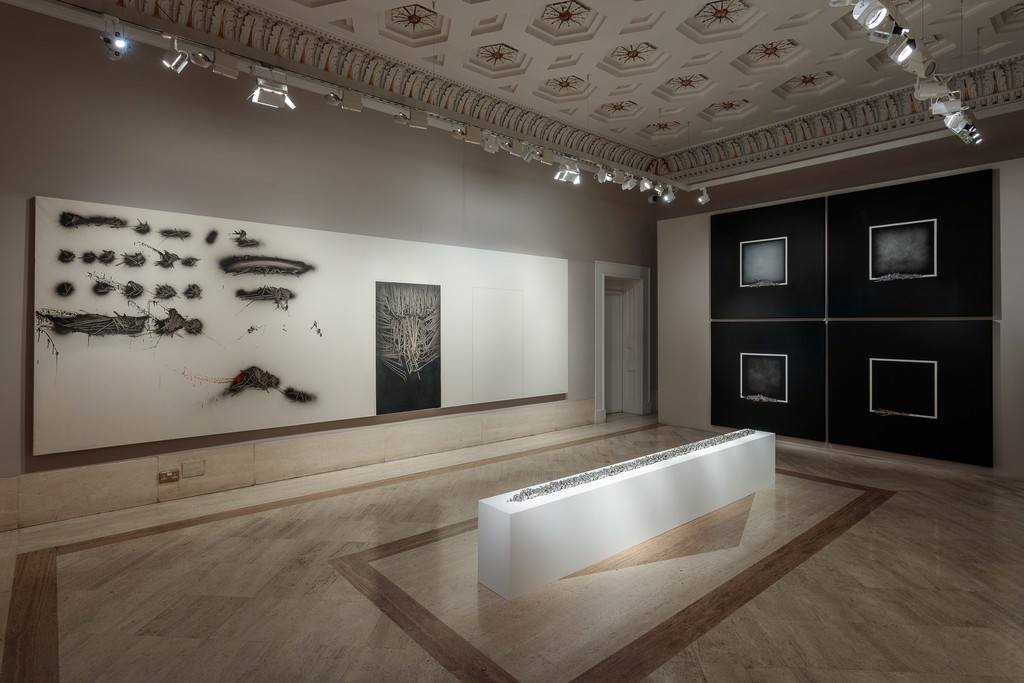 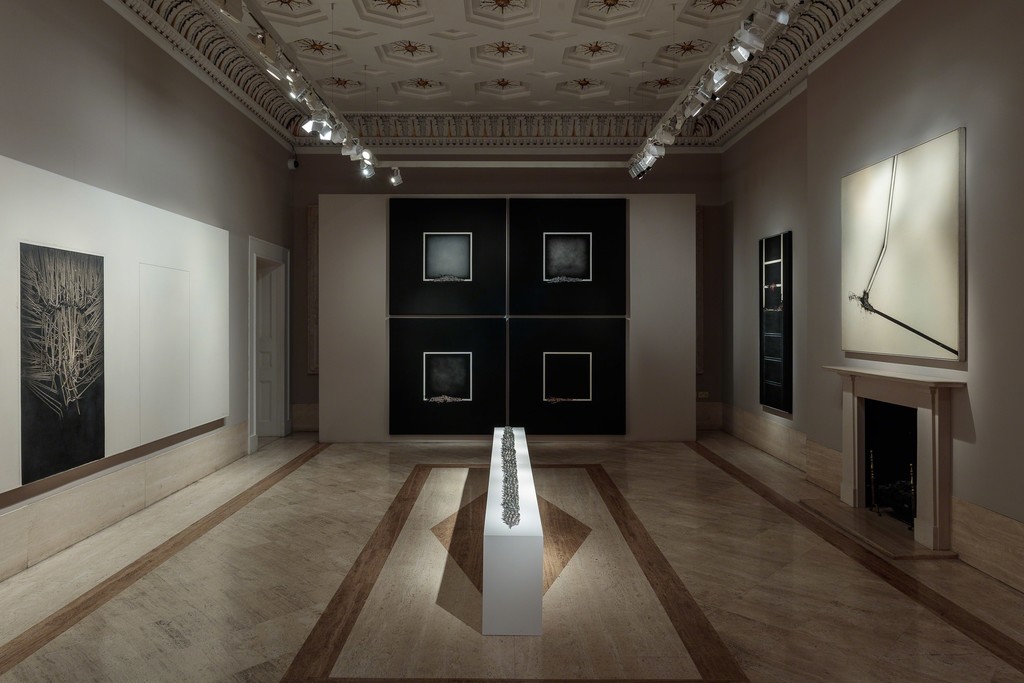 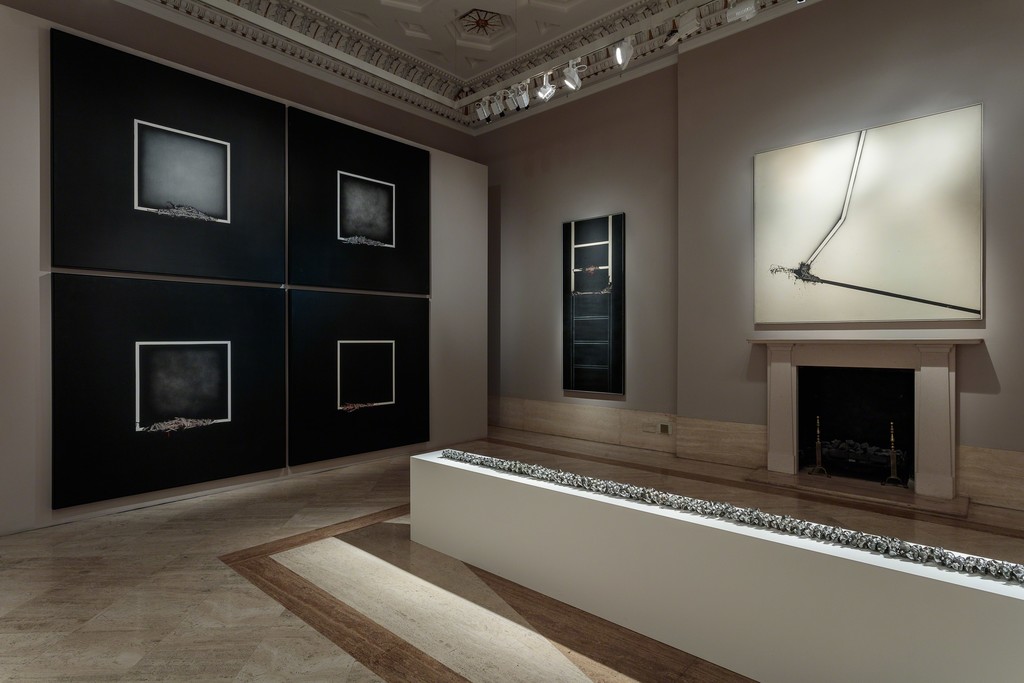 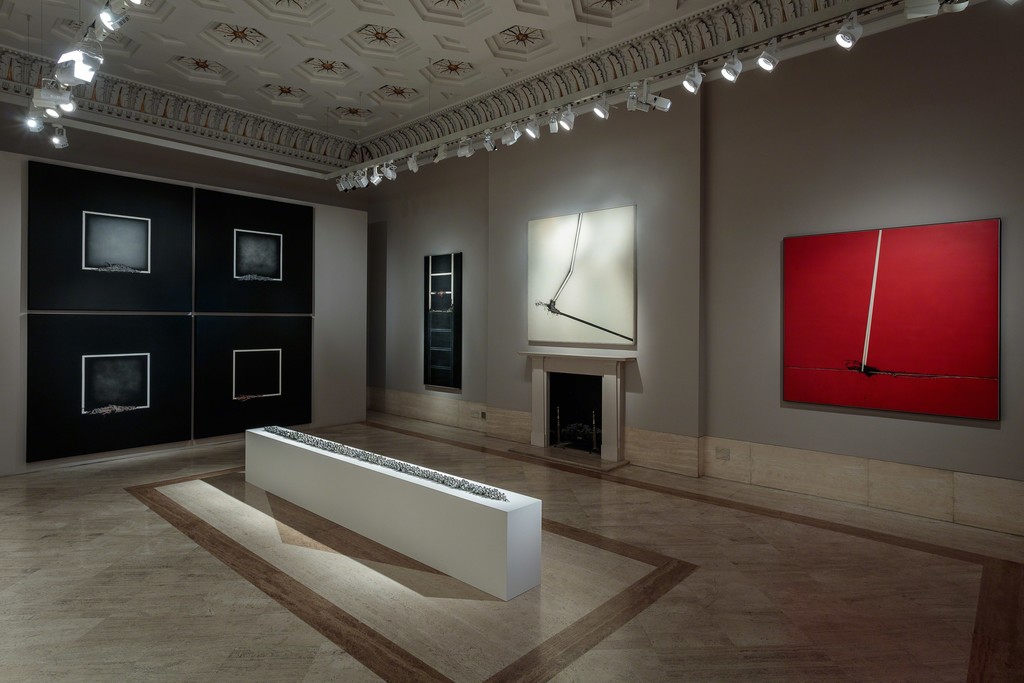 ROBILANT+VOENA are pleased to present Emilio Scanavino, The Tactile Sign of the Void on view at their London gallery from 4 October to 18 November. This is the first retrospective of Emilio Scanavino in the UK in 65 years since his first solo exhibition held in London in 1951. Curated by Francesca Pola and organised in collaboration with the Archivio Scanavino, the show will celebrate the work of the artist and his decisive creative decades of the 1950s through to the 1980s. This period saw his affirmation as one of the pioneers and protagonists of an innovative poetics of the ‘sign’, situating his practice between the Informel and Spazialismo movements and a new concept of the void.

Scanavino’s revolutionary work first developed in the years immediately following World War II. In a direct dialogue with an international and vibrant artistic context, his contemporaries included Sebastian Matta and Alberto Giacometti, Francis Bacon and Graham Sutherland, and artists of the CoBrA movement (Asger Jorn, Karel Appel and Corneille in particular). It was the time when Lucio Fontana and Alberto Burri were developing their radical experimentations with space and matter, overcoming the traditional notions of painting and sculpture into a new direct relationship with the world. Fontana himself was a very close friend of the artist, as is testified by Scanavino’s Necrologio per Fontana (An Obituary for Fontana), 1968, created on the occasion of his death and included in the exhibition.

Similarly to other artists of the period, such as Giuseppe Capogrossi, Tancredi, Wols, and Marc Tobey, Scanavino adopted the ‘sign’ in his paintings. However, Scanavino’s technique is characterised by a distinctive human quality: the gesture is the focus, and the intention is the one of penetrating the meaning of reality. It is an investigation into the void intended as the space for the compression of the material energy of man and his relationship to the world.

Scanavino’s practice aimed at overcoming the traditional notion of abstraction as lyrical, surreal or constructive, whilst incorporating it into a new relationship of the image with reality. He achieved this by using the pictorial sign as a gesture of knowledge, as a way of appropriating the universe mediated by his interiority, by touching the void where energy connects men and things. Scanavino’s unparalleled pictorial quality was formed by the continuous study of Renaissance painting and the Italian Old Masters. This was developed in parallel to the poetics of the Informel and Spazialismo movements in the 1950s, to the ‘zeroing’ of the surface and the discovery of a new space in the 1960s, to the conceptual and analytical trends of the 1970s, finally to the expressive rediscovery of painting in the 1980s. He was always proposing his unique solution to the interpretation of his own time.

The exhibition will bring together pivotal examples of Scanavino’s work. The first work in the show is Matrimonio bianco (White Wedding), 1951, which he exhibited in London in a joint solo show with Sarah Jackson and which was attended by Henry Moore. This led to his participation in the crucial exhibition This is Tomorrow at the Whitechapel Gallery in London (1956). Another seminal work, All’origine (At the Origin), 1957, was presented in his solo room at the Venice Biennale in 1958; it is exhibited together with Omaggio al Maestro (An Homage to the Master), 1962. This three metre long masterpiece, which Scanavino explicitly linked to Leonardo da Vinci’s experimentation with colours, recreates the same chromatic scale described in his Taccuini (Notebooks).

La porta (The Door), 1977, six metres in length, is one of the largest pieces Scanavino ever created; it is symbolic of his investigation into geometry and architecture archetypes, characterising his exploration of the void as a threshold to the infinite. Nearby is Colonna vertebrale (Spinal Column), 1964, his largest sculpture. Both are exhibited here for the first time outside of Italy.

The last room of the exhibition presents, for the first time ever, a rare selection of sculptures from the 1950s and 1960s. Works such as Le uova mai schiuse di Hiroshima (The unhatched Eggs of Hiroshima), 1969, are presented together with his drawn photographs from the early 1970s, exemplifying the germination of Scanavino’s pictorial and plastic ideas.

This selection of about 35 works, including some unpublished and never before exhibited pieces from Italian private collections, will be the core of the exhibition. In demonstrating the outstanding wealth of Scanavino’s creative output, the show will reaffirm the role played by the artist in the international development of modern and contemporary art.

The exhibition will be accompanied by a 200 page book, written and edited by Francesca Pola and published by Marsilio Editore. Based on extensive studies of Scanavino’s work, with over 160 images of paintings, historical photos and documents, it will include a selection of critical historical writings and an iconographic mapping of selected works in museums around the world.