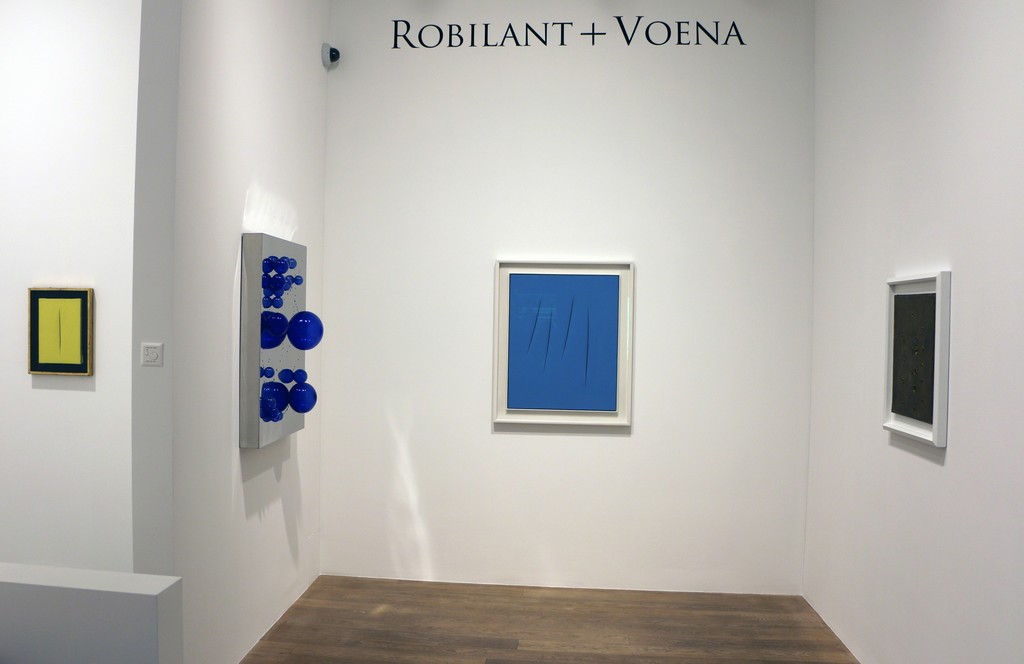 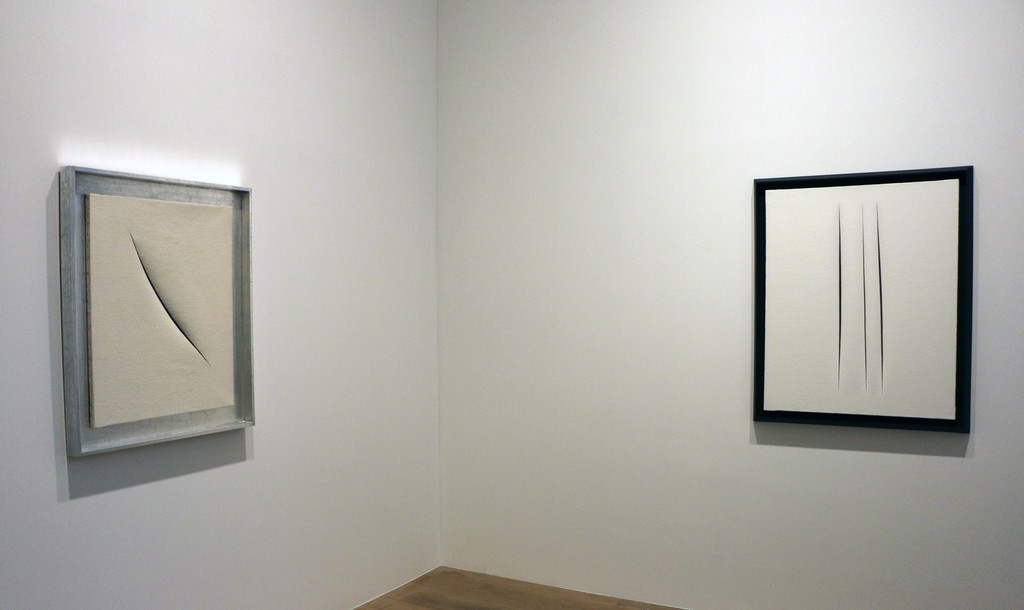 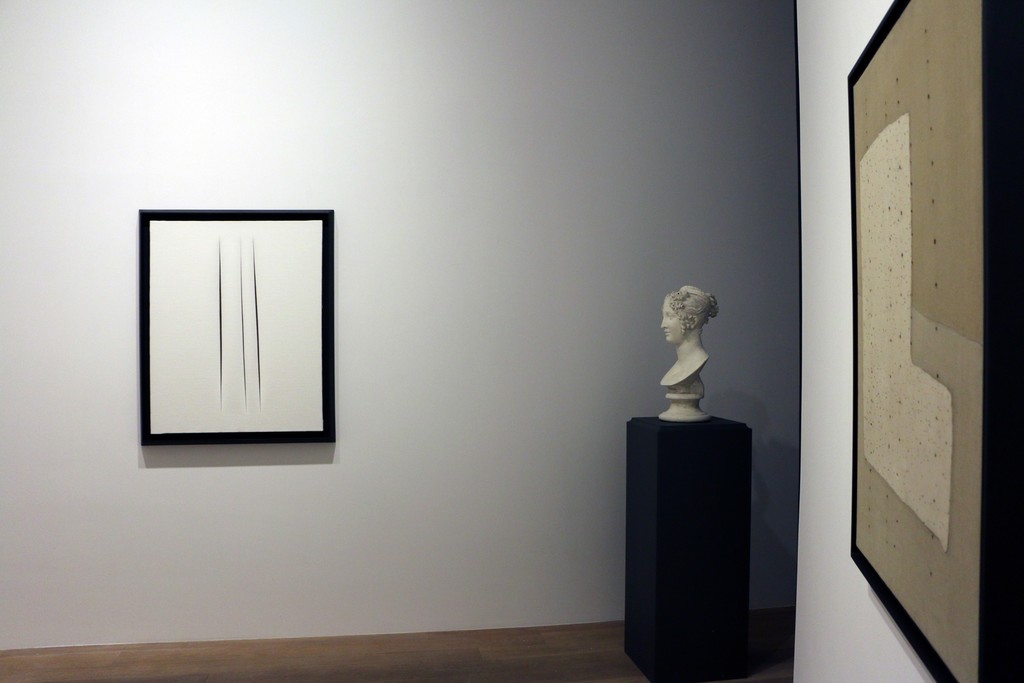 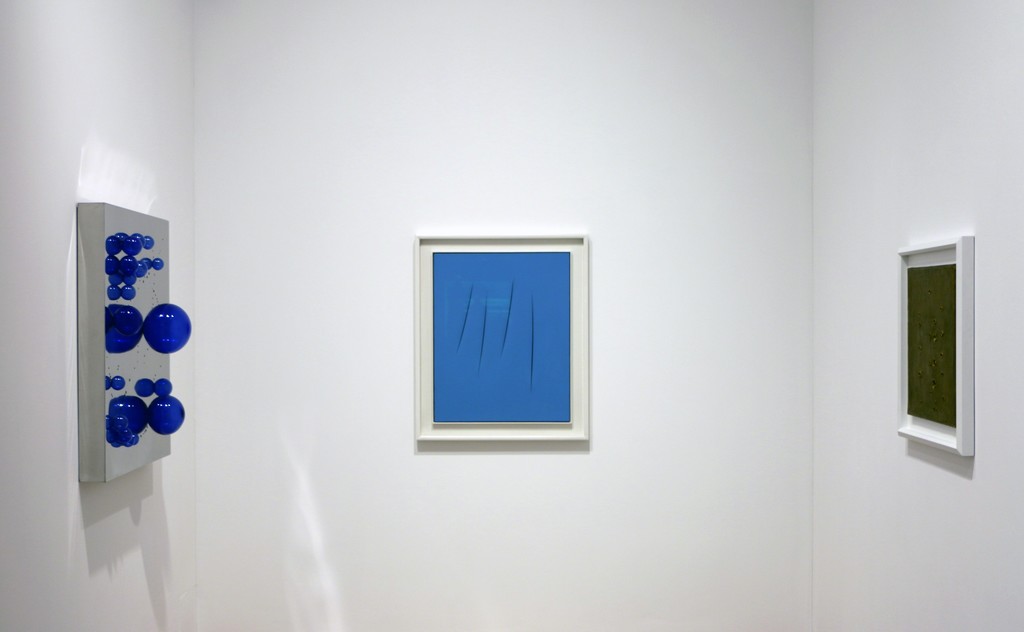 ROBILANT+VOENA are very pleased to present a solo exhibition of works by the celebrated Italian artist Lucio Fontana (1899-1968), on view at our St. Moritz gallery from 4 December 2015 to 10 January 2016. The exhibition will focus on Fontana’s later career, and will present a curated selection of works from the early 1950s through to 1968, the year the artist passed away.

It is often asserted that Fontana’s work can be easily identified with a single artistic gesture – his signature slashes, but in fact his legacy is extremely versatile both in its forms and concepts. Over the course of a very prolific career, Fontana produced an incredible number of works spanning multiple mediums and techniques, ranging from painted canvases and works on paper to works on metal and ceramics.

The body of work displayed in this exhibition will exemplify some of the different phases of Fontana’s career.
The show will bring together an early work on paper, Concetto spaziale (1951) as well as a Concetto spaziale from 1957 belonging to the Inchiostri (Ink) series. This series was realised between 1956 and 1959 and is characterised by the use of organic ink – the so called ‘aniline’, and made by perforating the canvas with a conspicuous number of small dots, and the use of multiple layers of canvas and a palette of soft tones.
In 1958, for the first time, Fontana applied a series of cuts (Tagli) on paper and as a fine example of this iconic series, the exhibition will include a rare and ground-breaking work from 1959.

Concetto Spaziale (1960) and Concetto spaziale. Attesa (1960) belong to the Buchi (‘holes’) cycle. The gesture of piercing the surface of the painting introduced by Fontana in the work of this period is that of scarring and destroying, as well as trespassing the traditional flat surface and breaking into another, entirely unknown dimension.
Subsequently, Fontana began making systematic cuts, which would become the most emblematic symbol of the artist’s practice and the encapsulation of his Spatialist theories. The 1960s were a decade of great productivity in which the artist further developed the conceptual gesture of holes and cuts, translating the latter into new formats and materials. Belonging to the beginning of this period is a white painting with one slash from 1960, while a yellow work with one slash and a blue one with four slashes were executed in 1967. The technical perfection that the artist achieved at this late stage of his career enabled him to successfully create these beautifully balanced and rhythmical compositions which culminated with a stunning white Attese with three slashes executed in the last months of the artist’s life.

In addition to these seminal works, the show will include a beautiful black and white ceramic executed between 1960 and 1963 and a work that Fontana realised in 1965 in collaboration with Egidio Costantini which combines large blue Murano glass balls executed by Costantini with a silver shining surface. Both works further exemplify Fontana’s multifaceted and diverse output and his experimental and innovative genius.