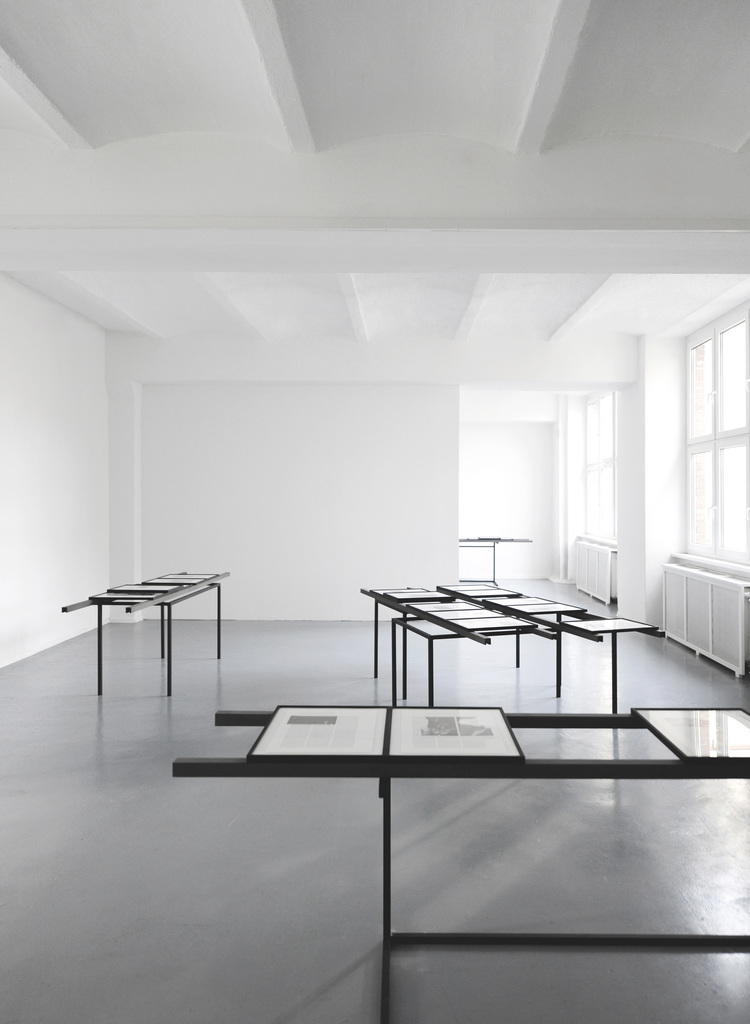 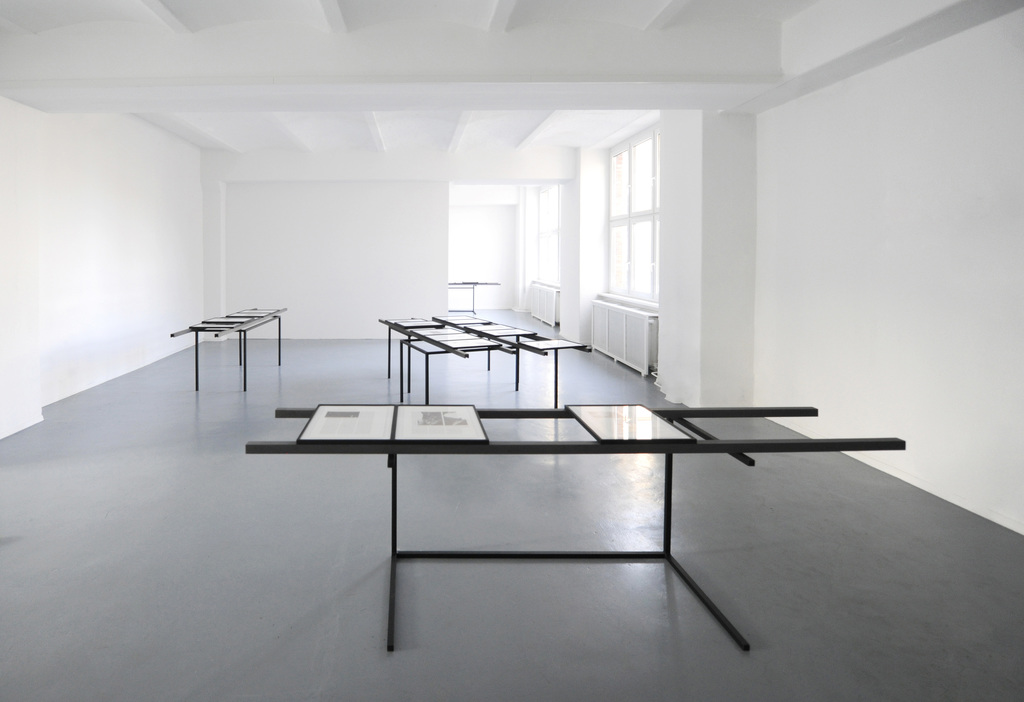 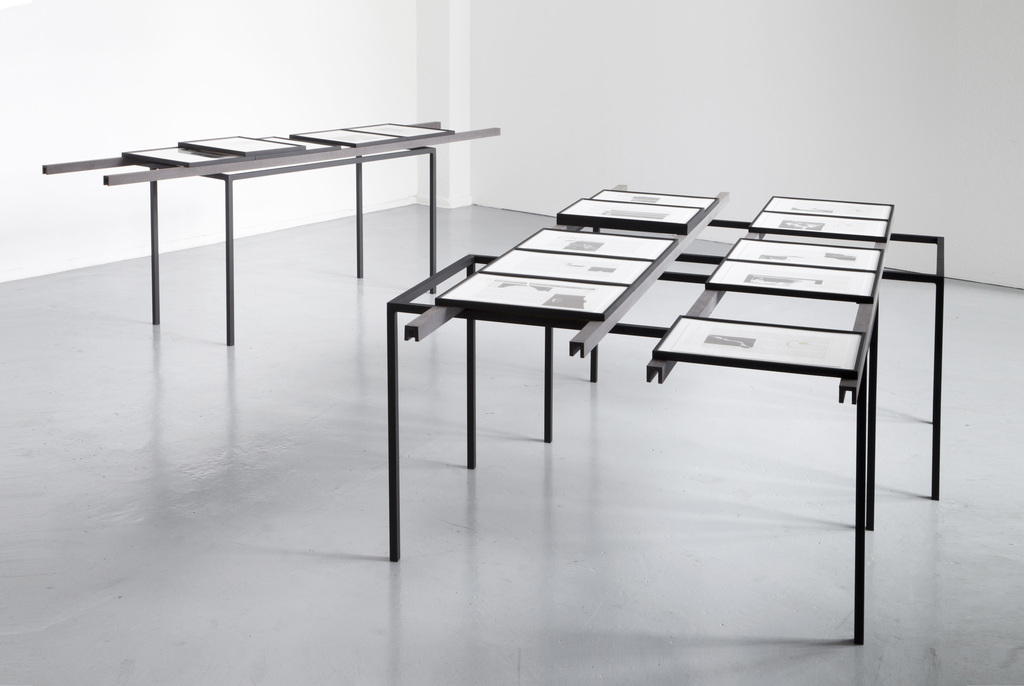 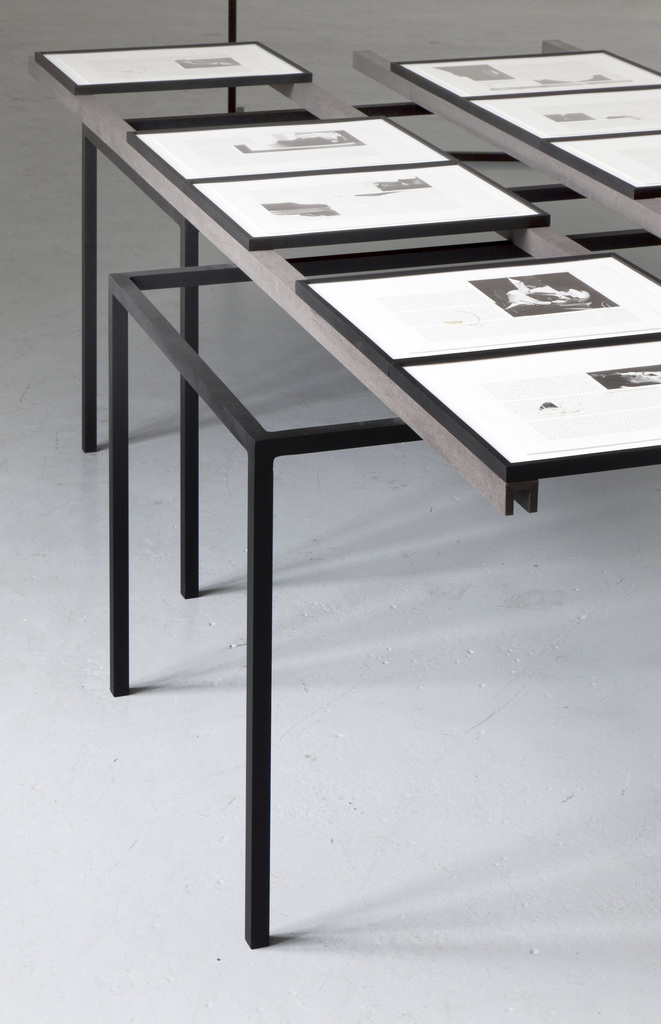 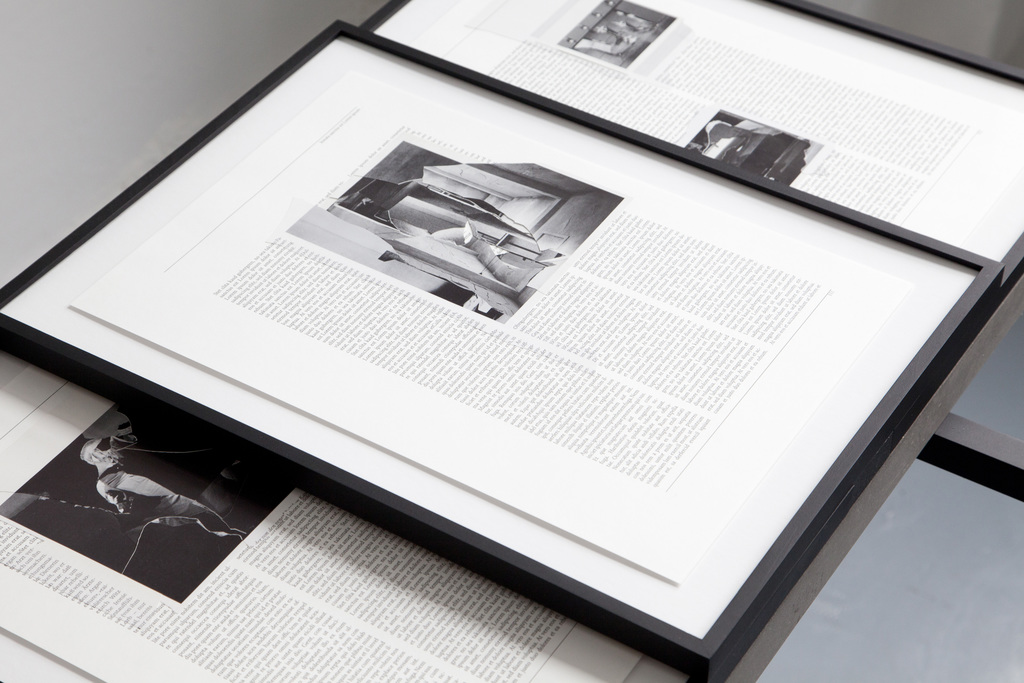 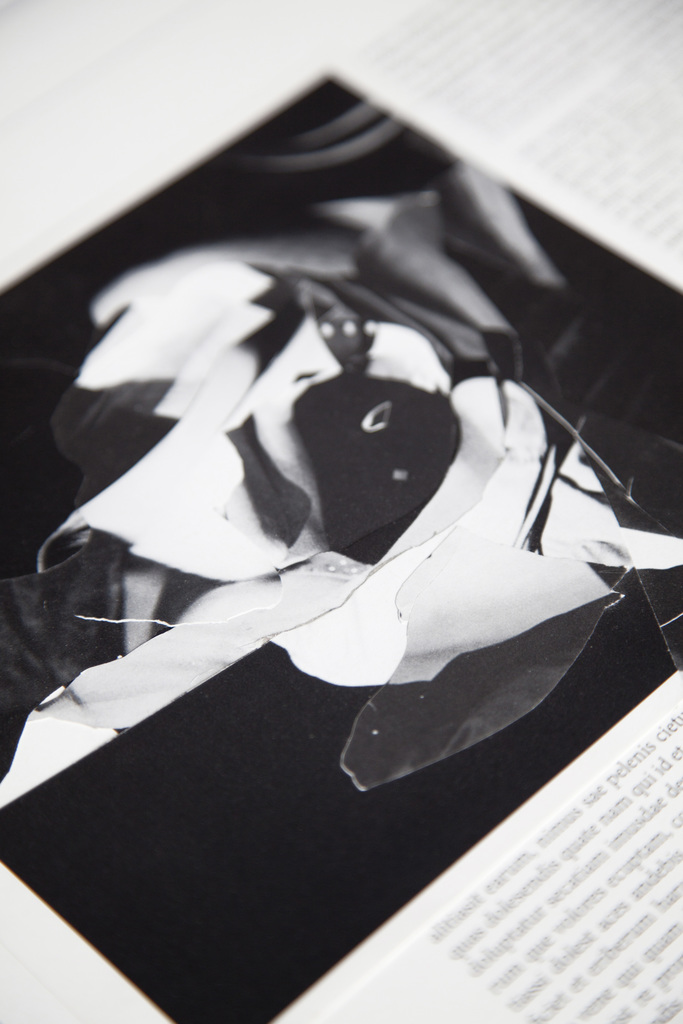 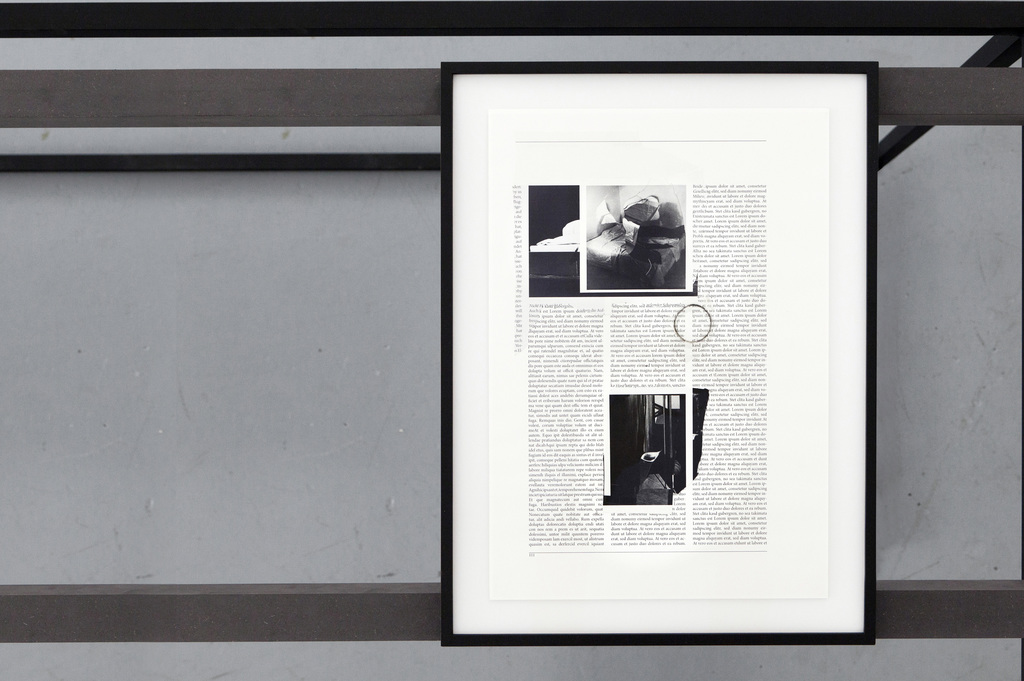 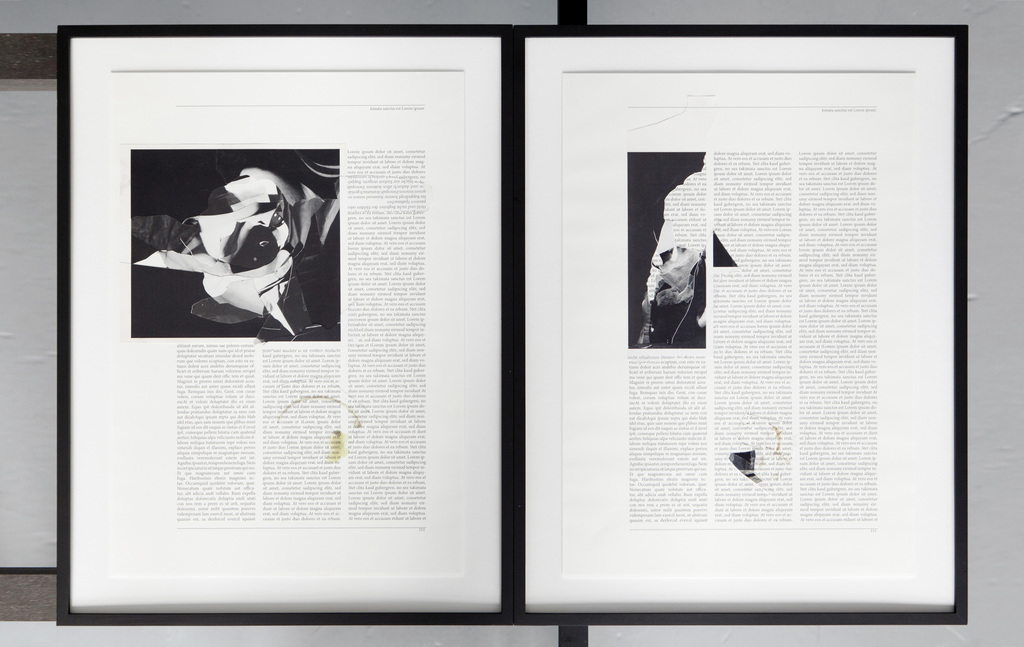 Galerie Rolando Anselmi is delighted to announce Crash Blossoms, the rst solo show by artist duo Astali / Peirce in the gallery space in Berlin. For this occasion, the artists will present a site-speci c installation which revolves around the idea of a publication release, entitling the show and featuring all the images dis- played in the exhibition. Astali / Peirce have assembled intricate montages of found black and white images that are inserted into a set frame of printed text. The text belongs to the standard ‘Lorem Ipsum’, used since the 1500s as a placeholder for the printing and typesetting industries. This formula, commonly used to delineate the graphic elements of visual presentations, is composed by a mangled section of a 1st century Latin treatise on good and evil, written by Cicero. The binary space of Cicero’s text nds its double in the cutouts and holes of the images. The montages each one separately framed - are set horizontally on metal structures: on these rails some frames disappear underneath others, hiding images or showing only parts of them, in a repetitive succession of solid and voids, cracks and discontinuities. Starting point of the whole installation is the idea of the publication release, Crash Blossoms, from which all the surrounding elements develop as components of a singular
disrupted narrative. The title itself is a copy editor term for syntactic ambiguity, where news headlines suggest apocryphal contents that can only be partially revealed. Through the playing out of these components parts, Astali / Peirce’s new works rearrange themselves as visual anagrams, where fractured images create an excess of fractured meaning, destabilizing habits of association, while courting the sense of a crystallised static motion.
BIOGRAPHY
Tolia Astali was born in Tbilisi, Georgia, in 1974 and Dylan Peirce was born in Paris, France, in 1977. They live and work in Berlin. Astali & Peirce have been collaborating since 2000, when they met on the postgraduate program at Chelsea College of Art in London, UK. They have since shown their collaborative work, consisting of sculptures, photographic prints, hybrid media, as well as sound and video installations, including at Fordham Gallery, London, UK (2001), Kunstwerke, Berlin, Kunstverein Konstanz DE, Glassbox in Paris FR. Over recent years they have held solo exhibitions at La Centrale, Montreal (Astali/Peirce 2009), Petra Rink Galerie, Düsseldorf (Astali/Peirce, 2009; Insular, 2011), The Chain Map, Düsseldorf (Interiors, 2012), Autocenter, Berlin (Seams 2012), and a presentations at Les Ateliers de Rennes - Biennial for Contemporary Art 2013