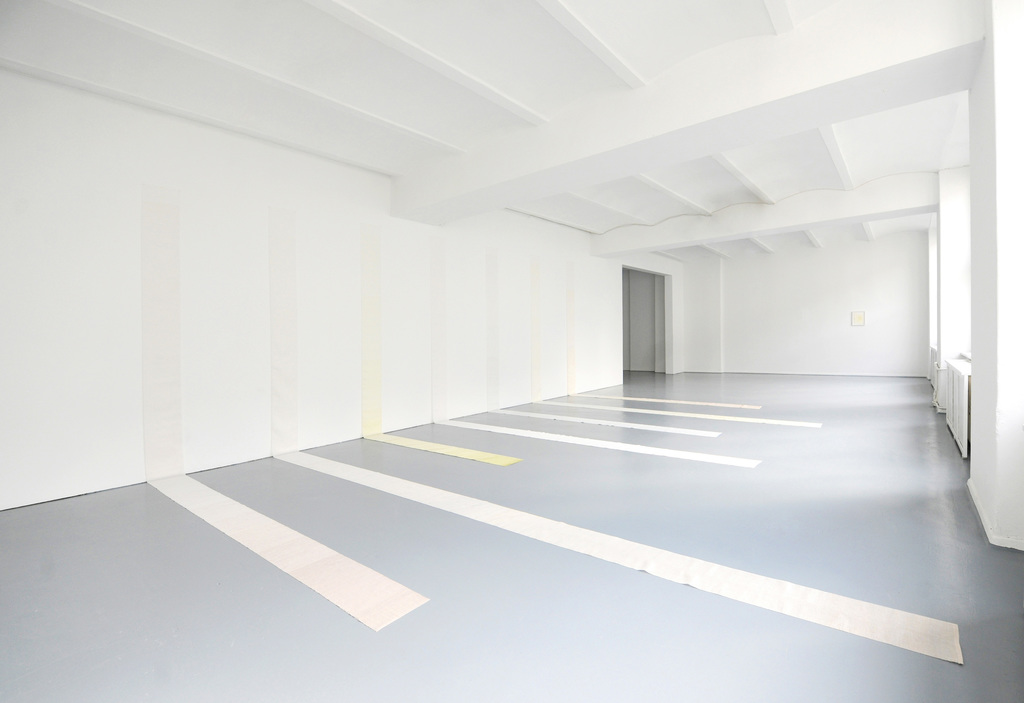 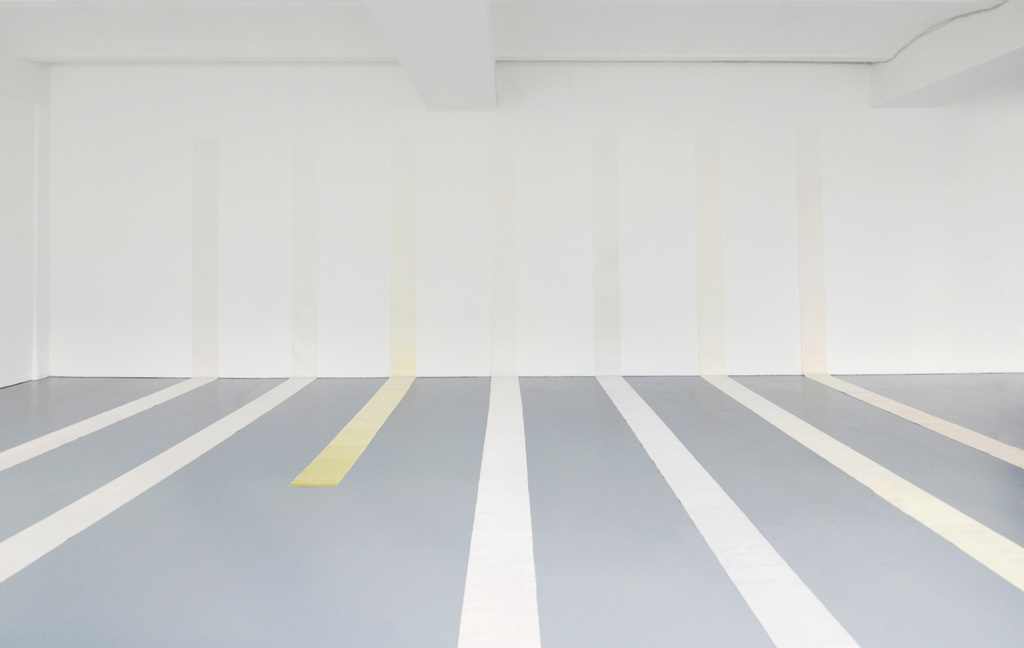 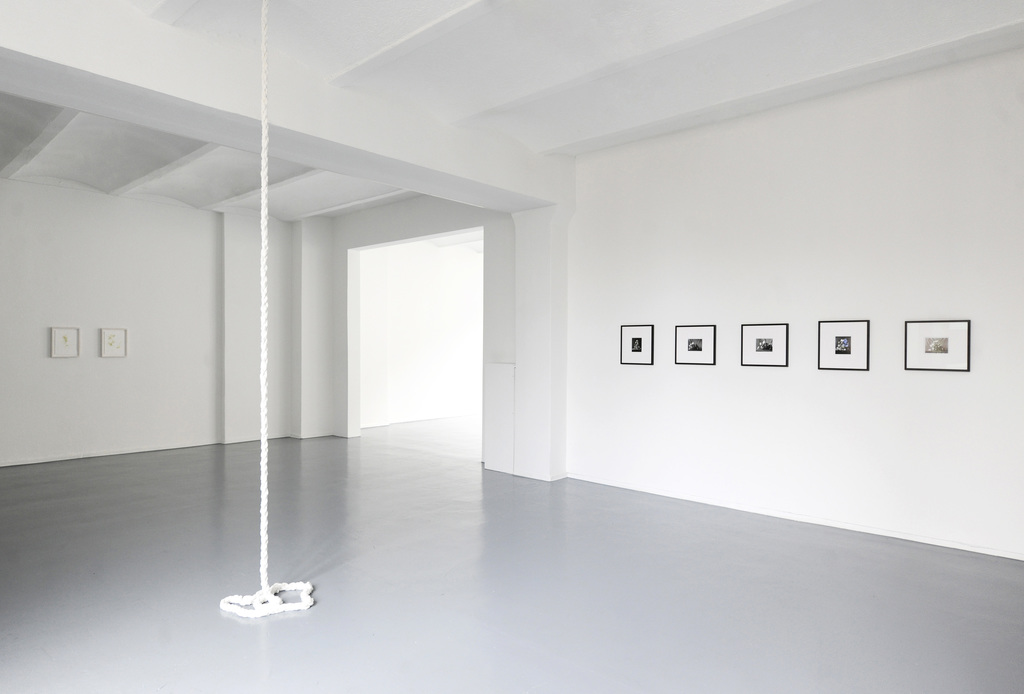 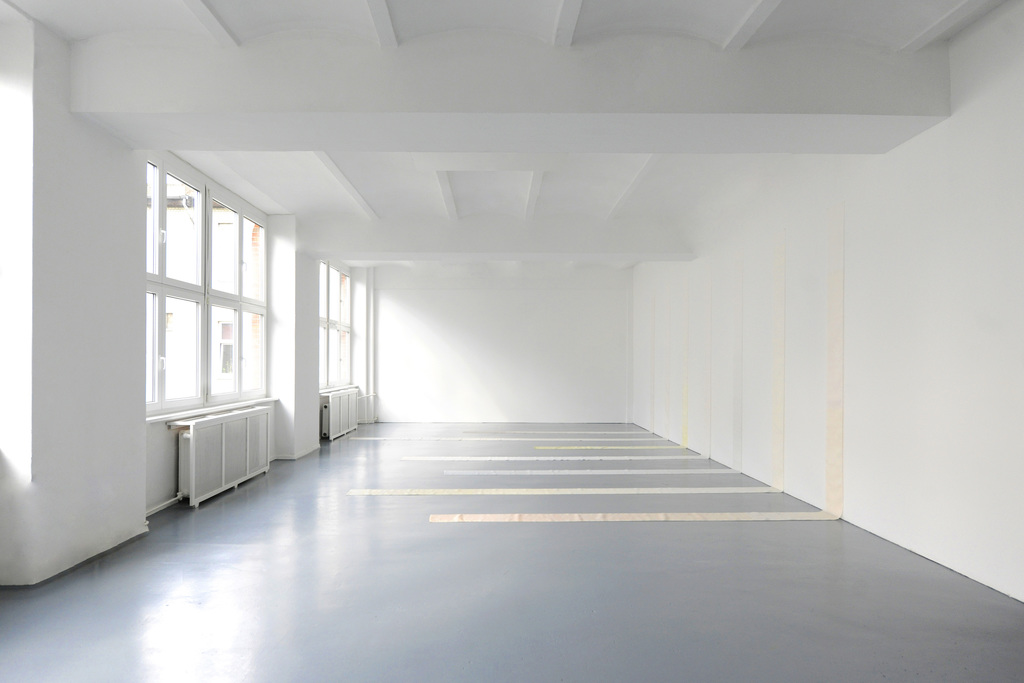 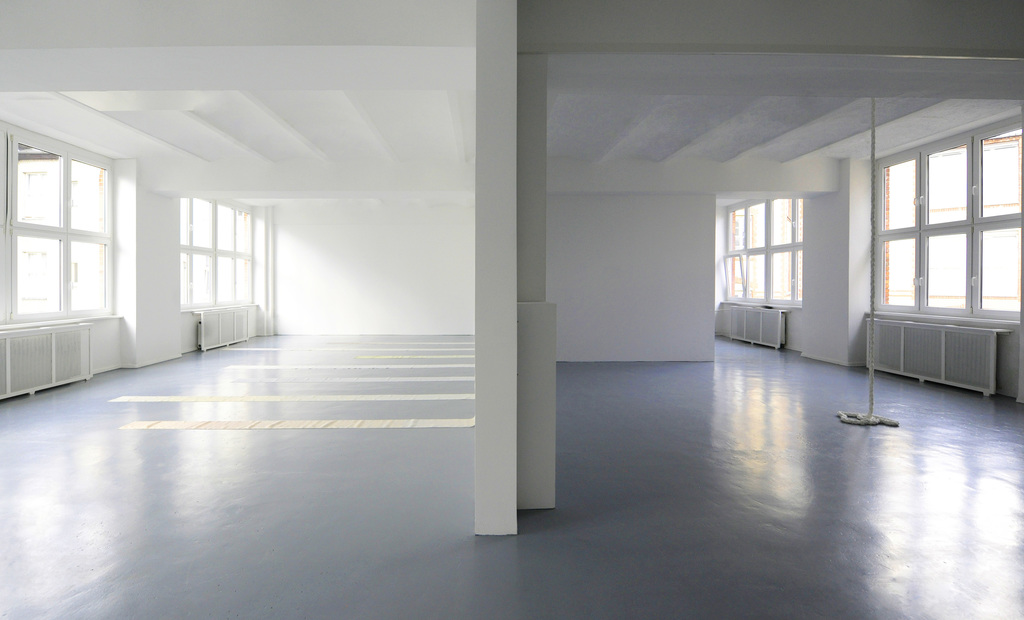 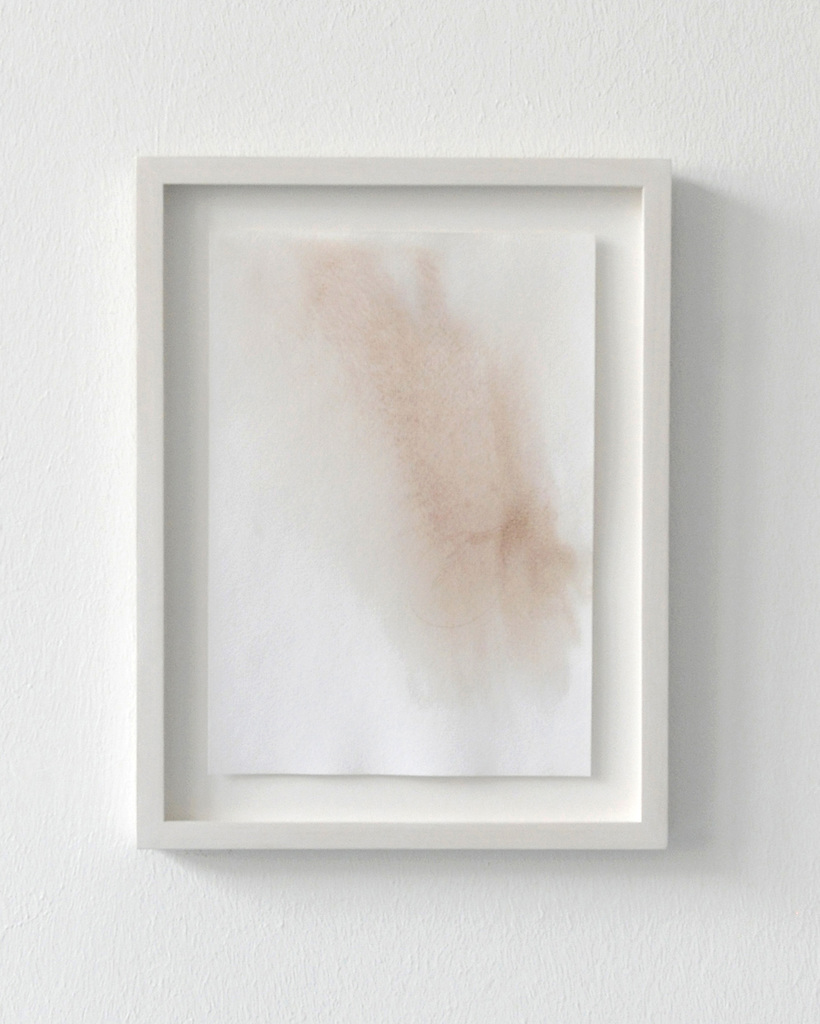 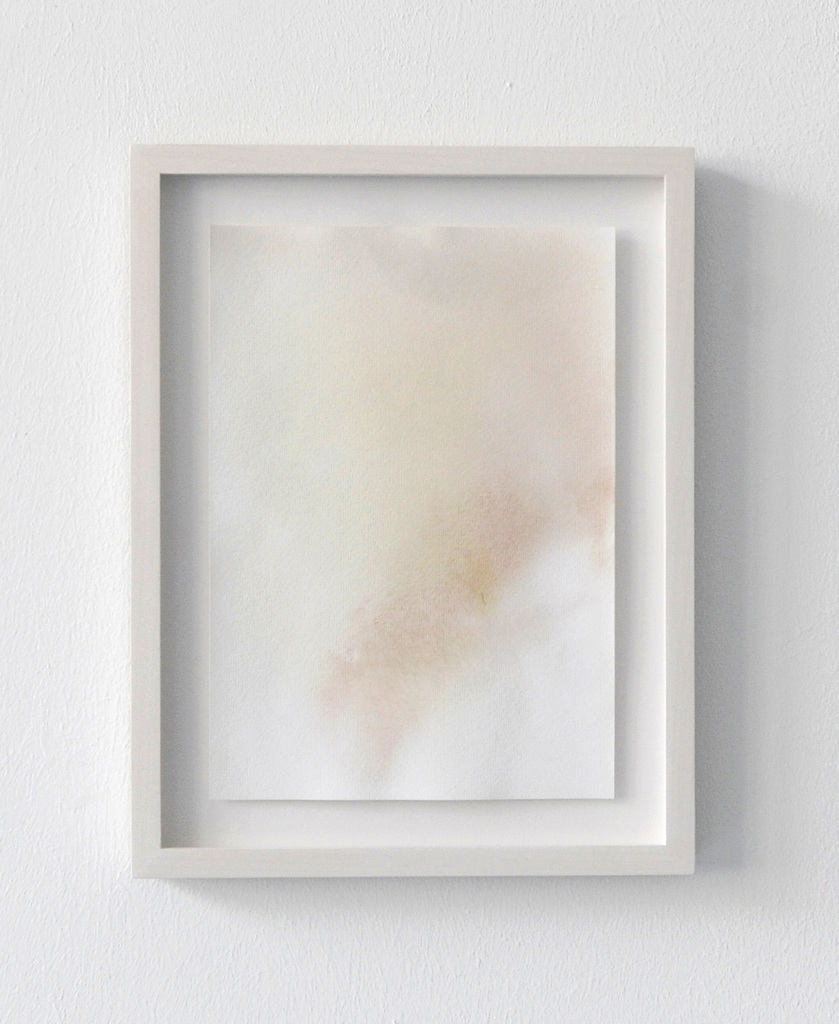 Galerie Rolando Anselmi is pleased to announce Immemorial, the first solo exhibition at its space in Berlin by British artist Jodie Carey (b. 1981). Ideas of time, memory, and materiality inhabit the works of Immemorial. Commissioned and created especially for the gallery - in collaboration with Neue Berliner Räume and curated by Manuel Wischnewski - this new body of work continues the artist’s exploration of life’s fragility and its brevity as well the resonance and meaning that materials can evoke in sculpture. Housed in the main room, the installation Untitled (Immemorial) provides the title for the exhibition. Long lengths of hand-woven cloth fall from ceiling to floor, mirroring the architecture of the space. What appears initially to be quite a simple work hides a complex process of production. The linen thread used to weave the cloth has been lightly stained with dyes created by the artist from the individual flowers of a bouquet. The changes in colour are gradual: soft and subtle. Carey has then engaged in the arduous process of weaving by hand the thread to make cloth, transforming the original bouquet of flowers into a lasting memorial that resonates with references to time passing, mortality and commemoration. These are soft, elegant and graceful memorials that evoke the body through the sensual texture of the cloth. In the second room, close to the entrance, the artist will present a second installation Untitled (Rope). Here the linen thread has been twisted and braided by hand, transforming the fine thread into a sculptural object. Inherently formless, the rope drops down from the ceiling and knots on the gallery floor, challenging the permanence and solidity normally associated with the traditional monument. Untitled (Rope) is tall and refined, while retaining a fragility and delicacy that is at odds with the somewhat melancholic associations of the hanging rope. The show includes then a series of five framed black and white prints, Elegy, showing wilting flowers in vases against makeshift fabric backdrops. The original source material was a series of rare glass plates used as part of photographic processes rarely used since the 1920s. They represent a forgotten and now redundant skill and the subject re-aligns us with the original bouquet of flowers and the theme of mortality so frequently considered throughout the history of art and literature and recurring motif throughout Carey’s works.
BIOGRAPHY
Jodie Carey was born in Eastbourne, Sussex, in 1981 and studied at Goldsmiths College, London (BA Fine Art, 2002 2005) and the Royal College of Art, London (MA Sculpture, 2005-2007). Over recent years Carey has held solo exhibitions at Pump House Gallery, London (Somewhere, Nowhere, 2011), Galerie Gabriel Rolt, Amsterdam (Traces, 2010), Towner Contemporary Art Museum, Eastbourne (In the Eyes of Others, 2009), Daneyal Mahmood Gallery, New York (2008) and Alexia Goethe Gallery, London (Still, Life, 2008). Selected group exhibitions include One Giant Leap, Works from the Saatchi Collection, Hyatt Regency, London (2012), Collaborators, Room Gallery, London (2012), Morbid Fascination, The Chicago Cultural Center, Chicago (2012), Dead or Alive, Museum of Art and Design, New York (2010), Anticipation, Selfridges, London (2008), Hearts and Bones, Galerie Gabriel Rolt, Amsterdam (2007), Anticipation, David Roberts Gallery, London (2007), Summer Exhibition, Royal College of Art, London (2007) and Deep Inspiration, Jerwood Gallery, London (2007). In 2012 she had a solo show, Solomon’s Knot, at The New Art Gallery Walsall, Gallery Square, Walsall, UK. Jodie Carey’s work appears in major UK collections, including the Saatchi Collection, The David Roberts Collection and Hauser and Wirth. Carey was the recipient of the Royal Borough of Kensington and Chelsea Studio Bursary Award 2007-2010. She currently lives and works in London.