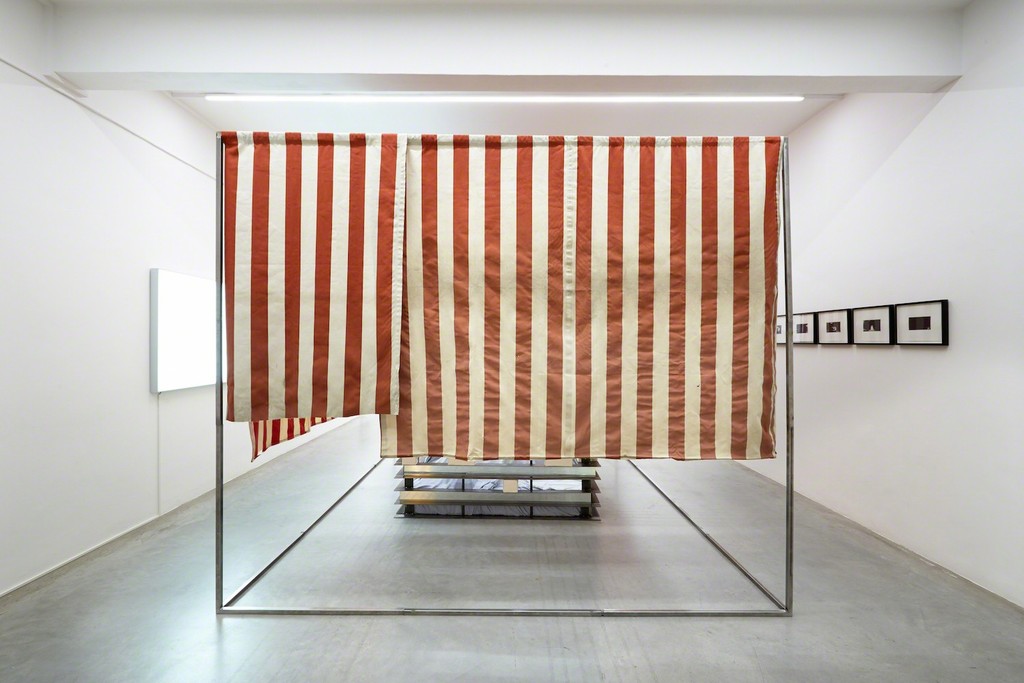 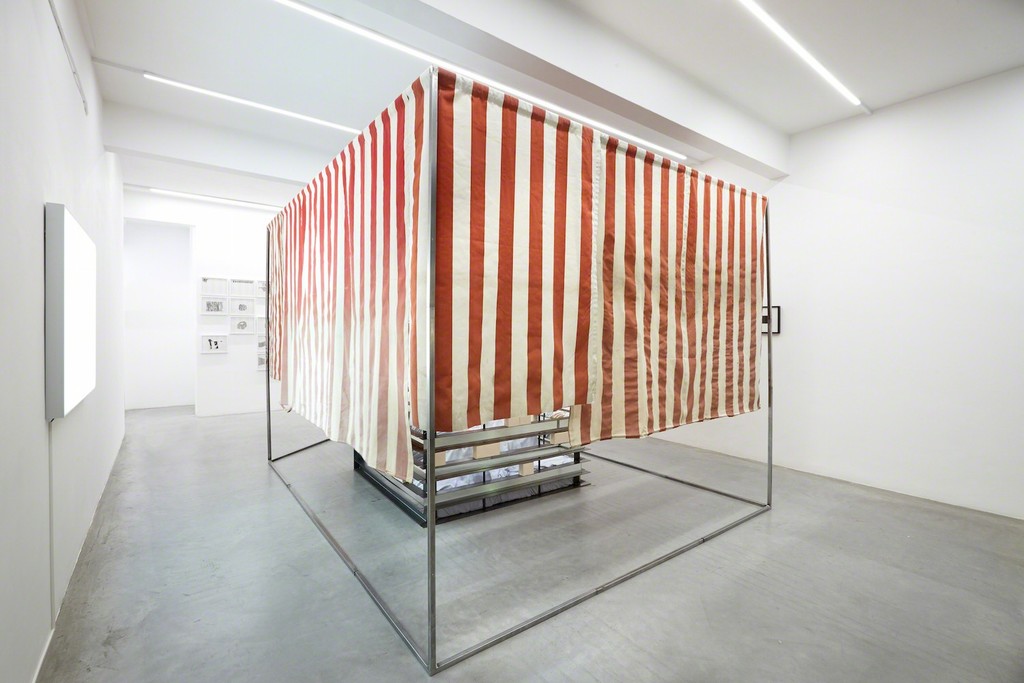 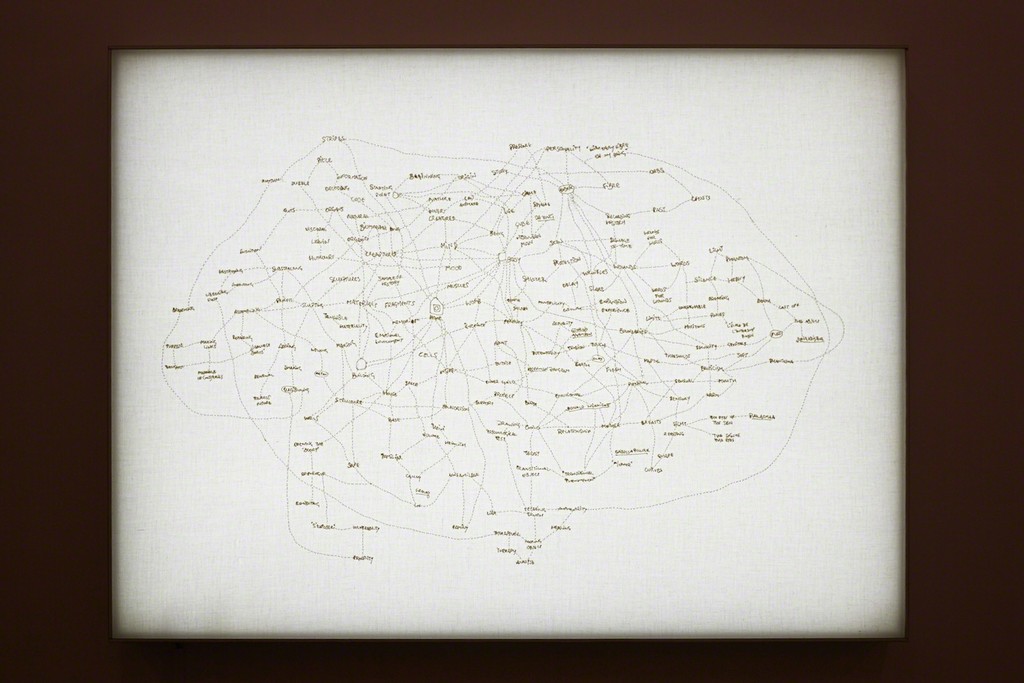 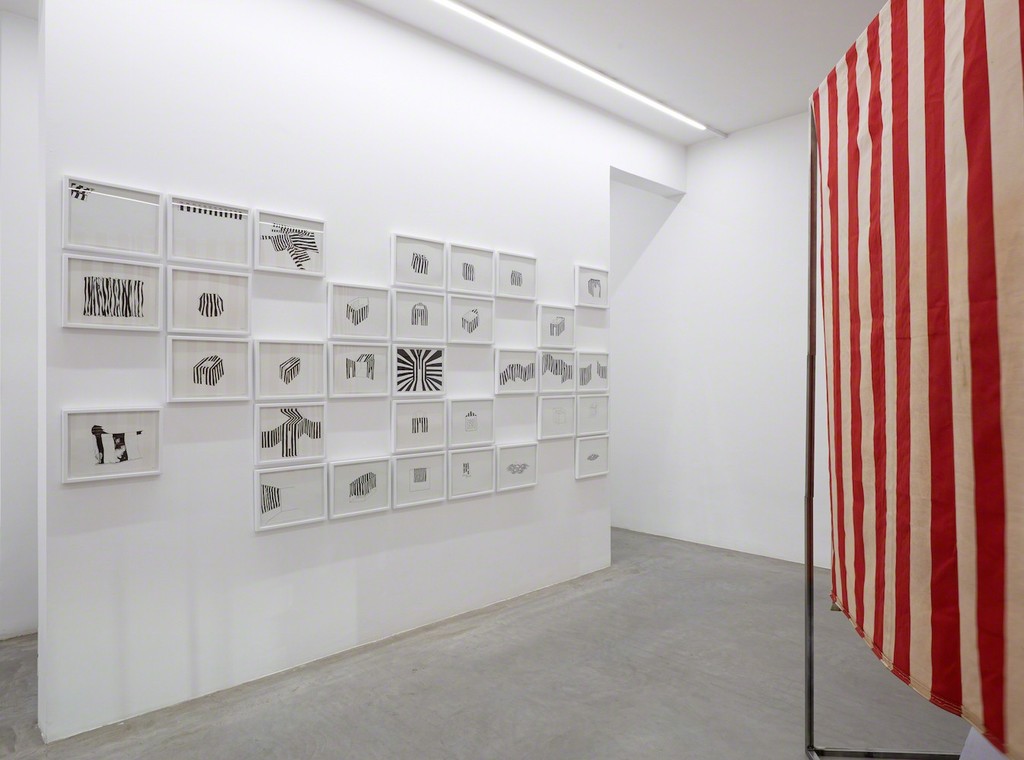 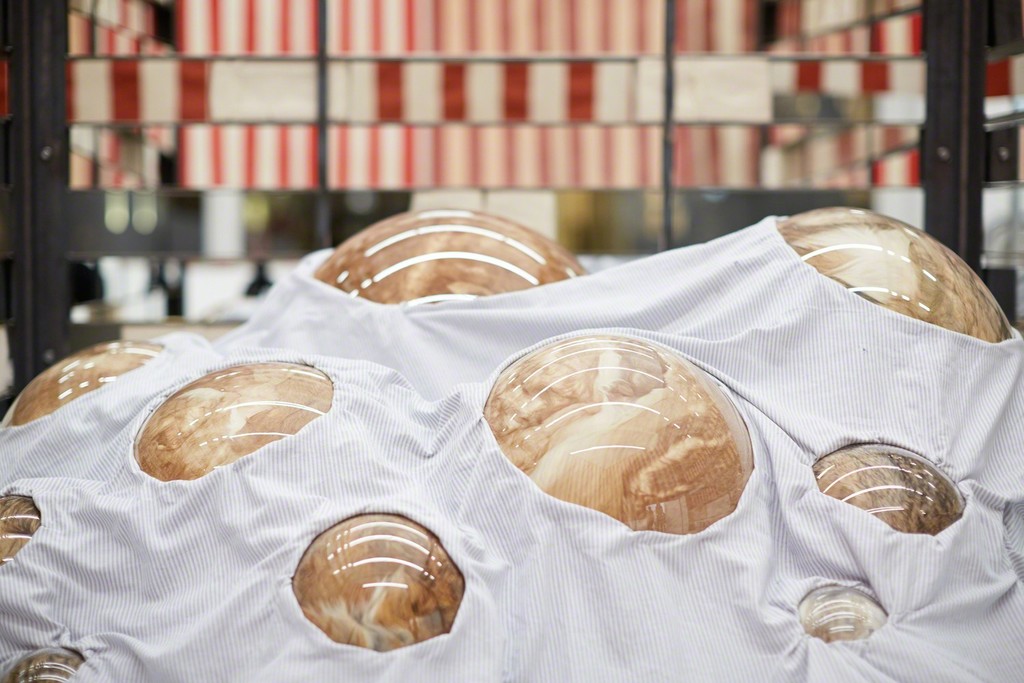 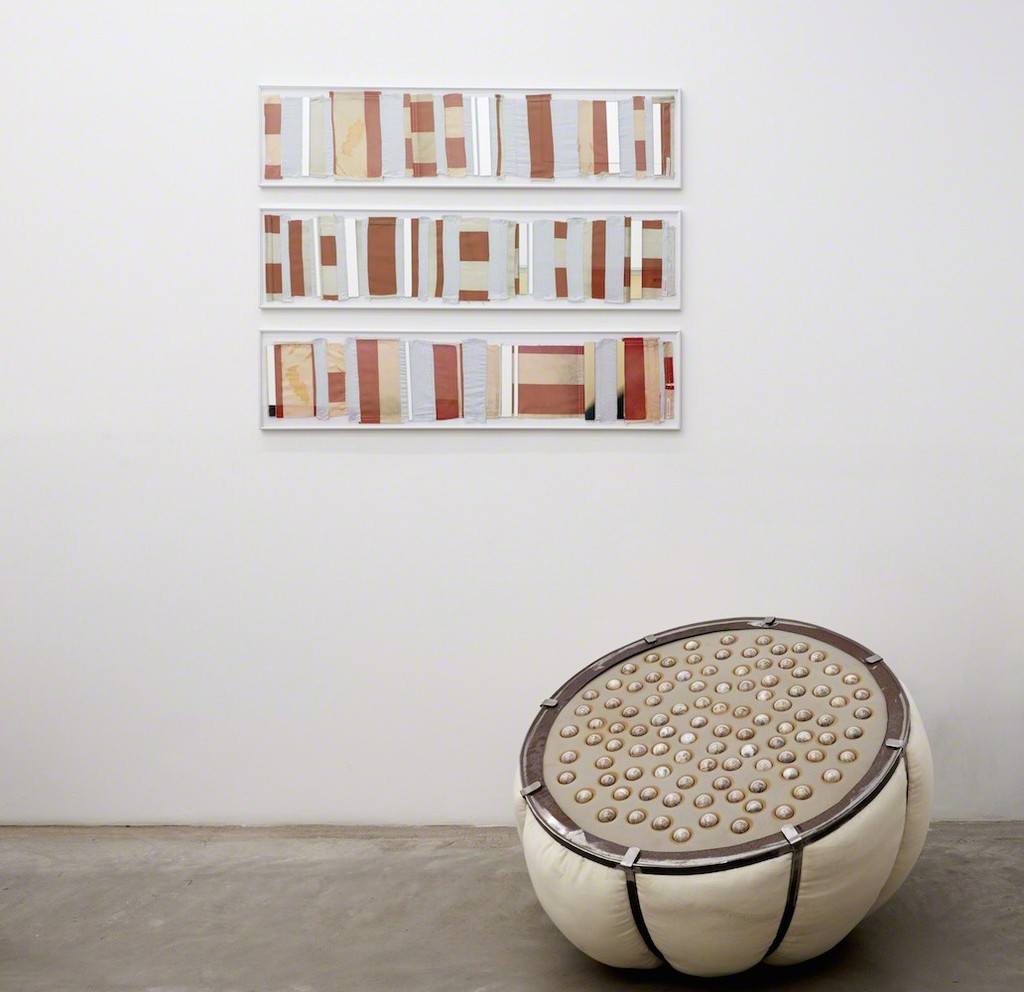 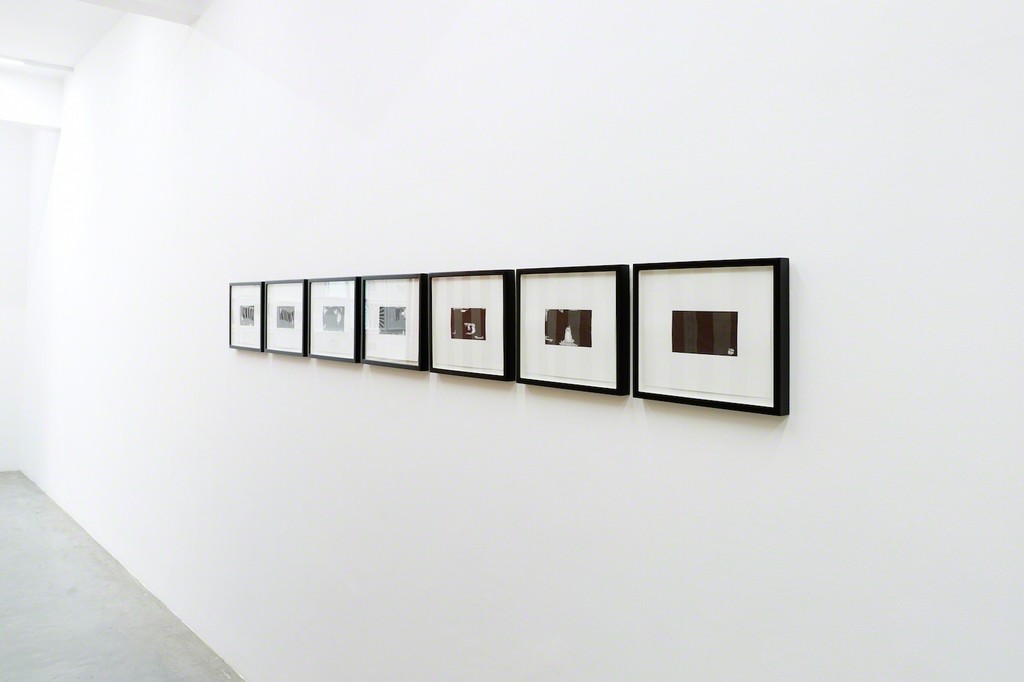 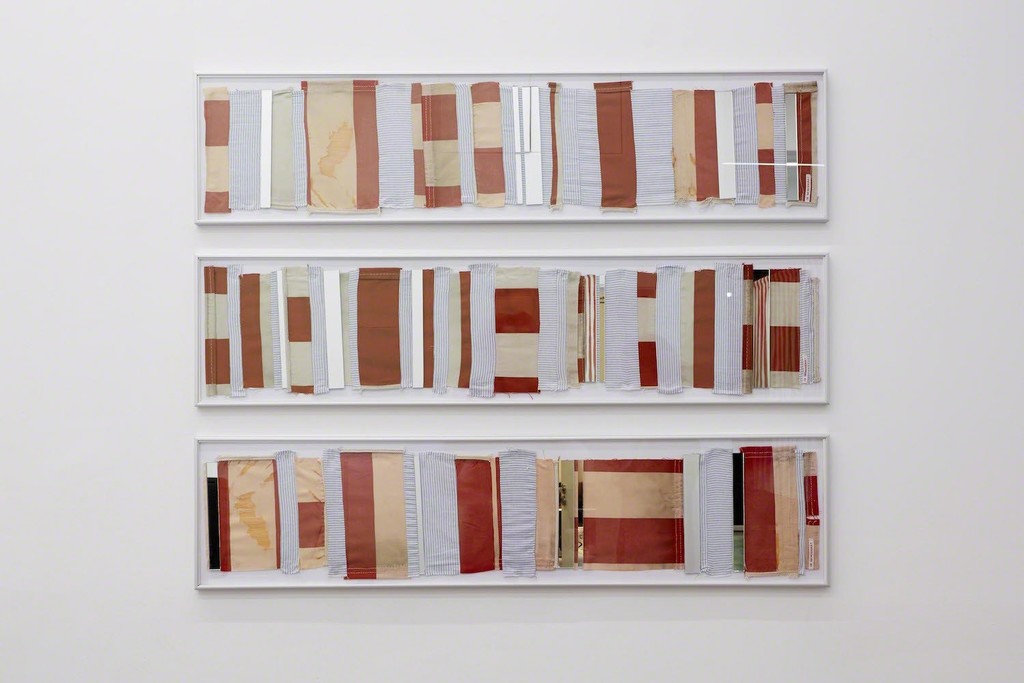 Created partly from red and white striped fabrics from the awnings of the artist’s family home, the installation is composed of a structure occupying the central space of the gallery. The work makes personal connections by replicating the exact dimensions of de Monseignat’s childhood bedroom and becomes an immersive space which visitors are able to enter. The reconstructed room responds to the playfulness of a child’s bedroom where imagination and creativity are untamed.

Inside the structure is an inner chamber that creates narrow corridors whose walls are the same height as the artist -1.70 meters. As visitors move through the installation they come to tactile sculptures created from fur encased in glass, which are set in an arrangement which pays homage to Louise Bourgeois’ marble sculpture Cumul, 1969. Referred to as ‘creaptures’, de Monseignat’s sculptures put into question the distinction between animate and inanimate objects, appearing as something in between creatures and sculptures.

A series of black and white ink drawings on display connect to de Monseignat's installation; used to work out sculptural ideas, the drawings act as studies.

De Monseignat has cited her influences as including: René Magritte’s subversion of the natural, Sigmund Freud’s The Uncanny and Louise Bourgeois' work which is heavily influenced by personal psychological events.

“With a strong grasp of Freud’s theory of The Uncanny, her work embraces themes of fertility, origin and the body [...] Placing the fur behind the surface of a glass sphere creates a desire to touch that remains potential rather than actual, thus setting up a curious tension where the viewer is invited to ‘touch’ with their eyes instead of with their hands.”

For de Monseignat the work has an afterlife within the space it occupies outside her studio. She explains:

“I investigate ways in which inanimate objects can trigger emotional responses and even hold a sense of presence in life. I attempt to inject this feeling of life into my sculptures by giving them a body, a soul and a story.”