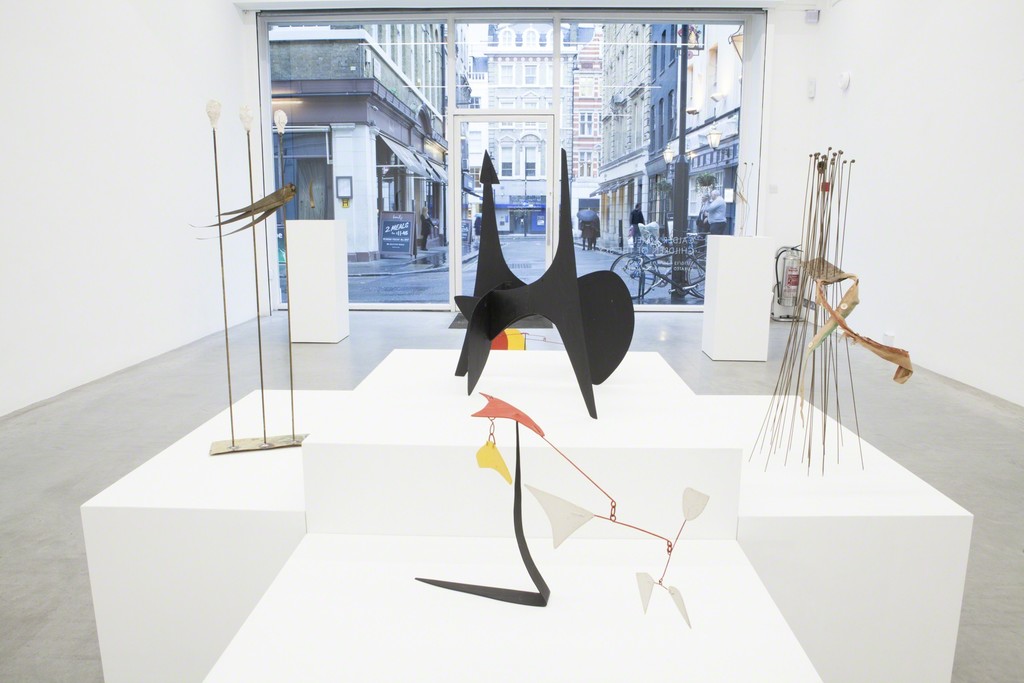 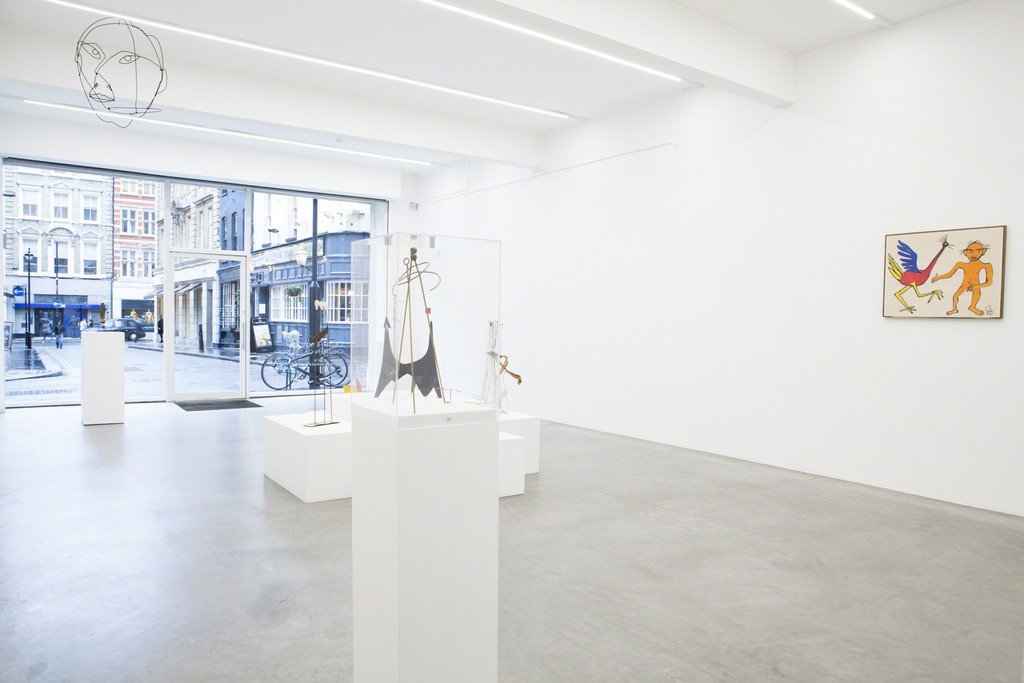 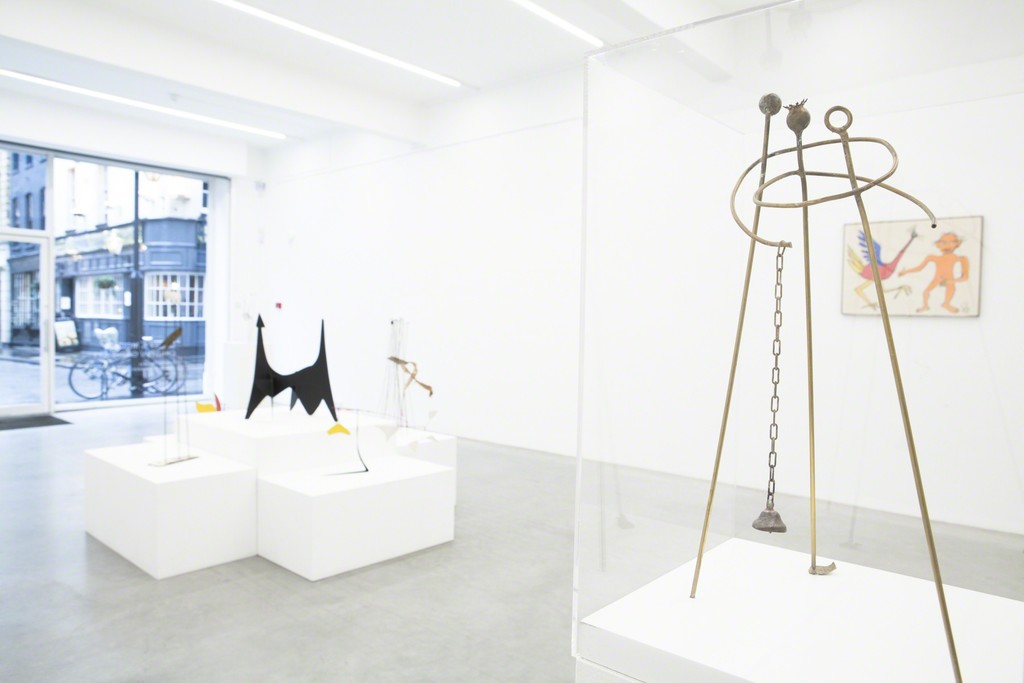 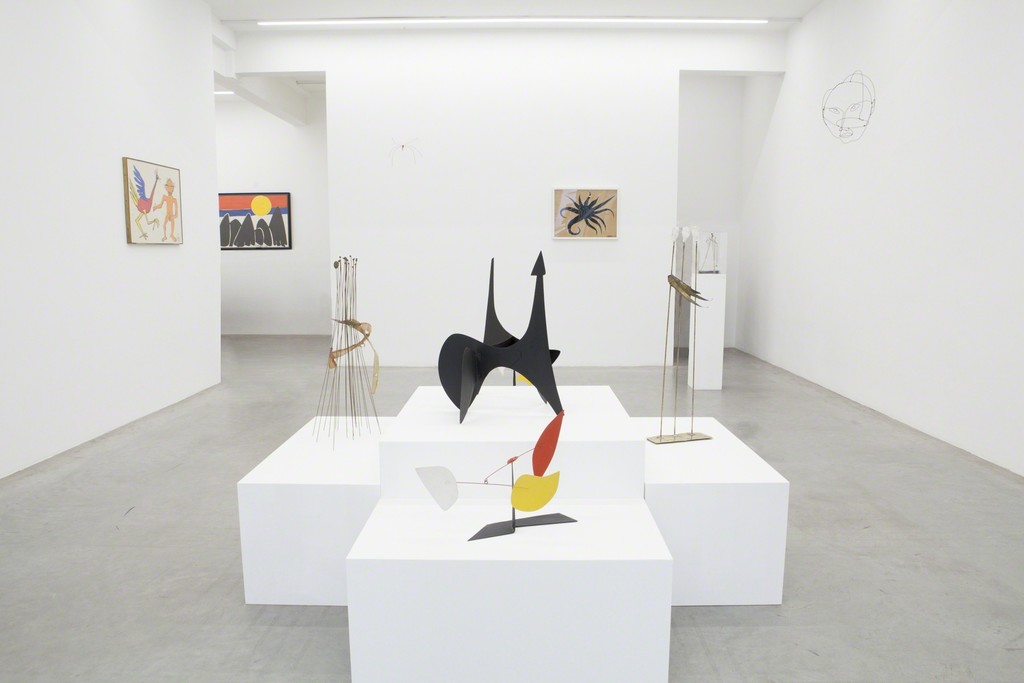 The exhibition features works by American artist Alexander Calder (1898-1976) and his Italian contemporary, Fausto Melotti (1901-1986). It tells the stories of two artists who took inspiration from the city of Spoleto and Italian cultural life in the post-War period.

This scholarly exhibition – including loans from private European collections and Museo Carandente Palazzo Collicola – is a rare opportunity to view many works which have never been publicly exhibited in the UK. While these artists were separated geographically, their respective bodies of work share many technical and aesthetic sympathies. Both artists employed a lyrical expressiveness in the often stolid medium of constructed metal sculpture. Influenced by both the Surrealists and Constructivists, Calder and Melotti were each attracted to working with iron and malleable alloys, using these materials to represent the balance of opposing forces. Both men were trained in engineering before turning to art and were interested in music and dance. Melotti trained as a pianist and often discussed his works in musical terms. Calder often collaborated with composers and choreographers. In their works, the precision of the engineer combines with a musician’s sense of rhythm, balance and play.

Calder’s relationship with Spoleto began when he visited in 1958 to oversee the construction of sets he had designed for a ballet. He was later commissioned by the Italian cultural figure Giovanni Carandente to make a sculpture for the Spoleto Festival.
In 1962 Calder created one his most notorious works, Teodelapio, a monumental steel ‘stabile’ sculpture which arches the main roundabout in Spoleto. This was the first stabile ever made by Calder. When the exhibition closed, Calder donated the work to Spoleto and it became the first non-traditional monument erected in an Italian square in the 20th century. This work opened a new chapter in his life as a sculptor and during his later years, he primarily concentrated his efforts on large-scale commissioned works. Urban stabiles were subsequently made for many places throughout the world including Mexico City, Montreal, Detroit, Berlin, Paris and New York.

Lorenzo Ronchini describes his relationship with Spoleto:
‘My father used to take me to Spoleto as a child and the city has always brought to mind creative, cultural and innovative artistic ideas. The amount of international culture packed into this small Umbrian town is impressive and many international artists such as Sol Le Witt and Henry Moore have also worked there. The art I saw and culture I experienced in Spoleto remains with me to this day so I am delighted to be working with the Spoleto Museum to bring a selection of works from their permanent collection to London.’

Ronchini Gallery will be showing the maquette of Teodelapio created in 1962 in painted aluminium. The sculptures and paintings on view range from the 1960s to the 1970s. Among the works in the exhibtion are Calder’s signature standing mobiles from the late 1960’s created in metal painted red, yellow and white. The gallery will present paintings including Soleil et étoile noire, 1967, a bold and arresting gouache on card work with a blazing orange sun rising out from behind a black star. Also on view is Octopus, 1964, and Ostrich and Orange Man, 1975, both gouache on paper works that demonstrate Calder’s use of dramatic movement and energy. A selection of freestanding wire sculptures will be included in the exhibition. Among them is Dancer, Headless Man Attacking a Woman, Dancer, 1967, Spider, 1965 and Portrait of Giovanni Carandente, 1967. Calder’s wire sculptures of this period tended to be portraits, caricatures, and stylized representations of people and animals. As his work developed, he created a place for wire sculpture in art history.
For Fausto Melotti, Spoleto was a city about dialectical confrontation, a driving force behind informal debate and new plastic expressions of sculptural language. He had a volatile start to his relationship with the city’s cultural scene when Carandente did not invite him to participate in the “Sculture nella città” exhibition in 1962. Carandente famously regretted this decision and his subsequently organised events in Spoleto included Melotti alongside Calder and other international artists. Carandente, Spoleto and Melotti forged increasingly strong links as time went on. Calder and Melotti met in Spoleto and on occasions spoke to each other, but they both remained firm in their independence as sculptors and never sought any kind of collaboration despite the strong parallels in their oeuvres. Melotti’s scuplture Insonnia, 1964 will be on display—a work which is associated with the famous Teatrini miniature theatres for which the artist is renowned. It was donated by Giovanni Carandente to the Spoleto museum. Other works on view by Melotti include sculptures that helped to establish his reputation as one of Italy’s foremost modern sculptors.