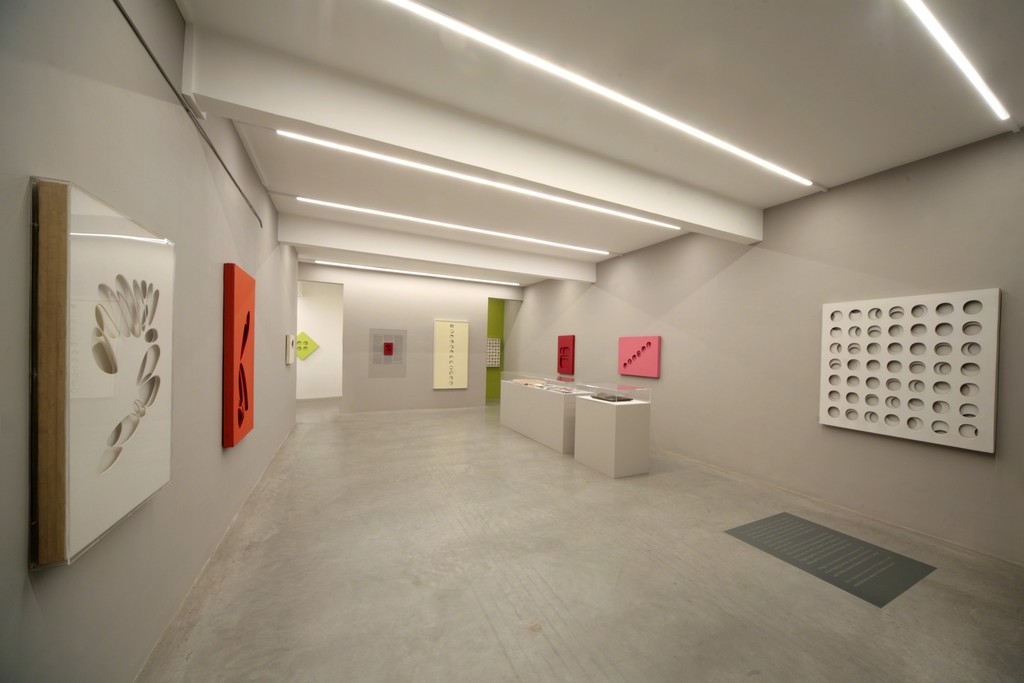 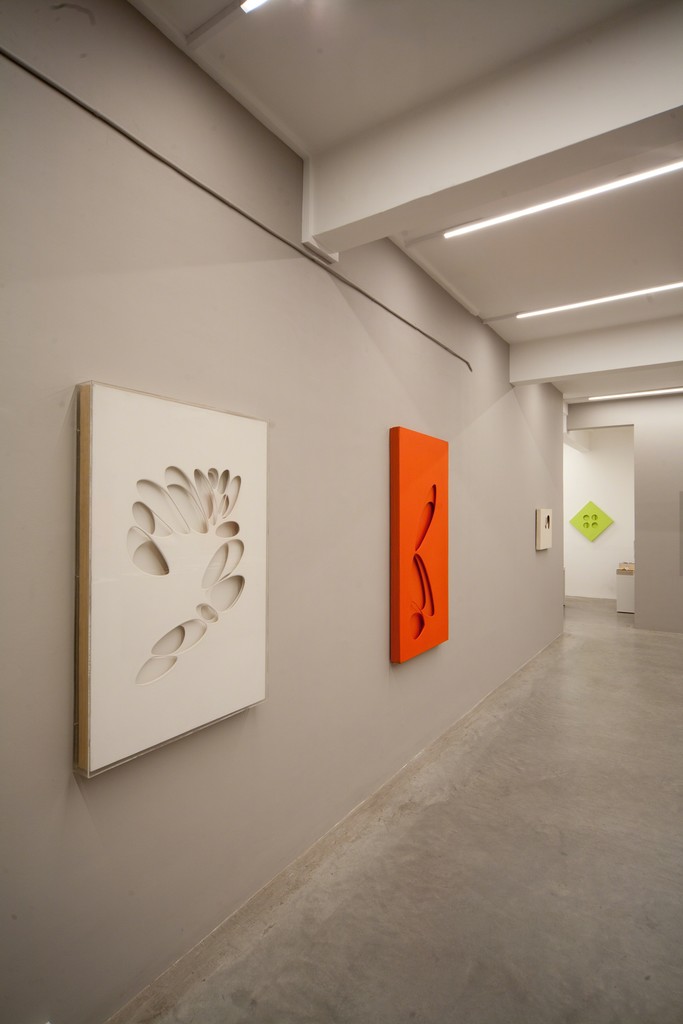 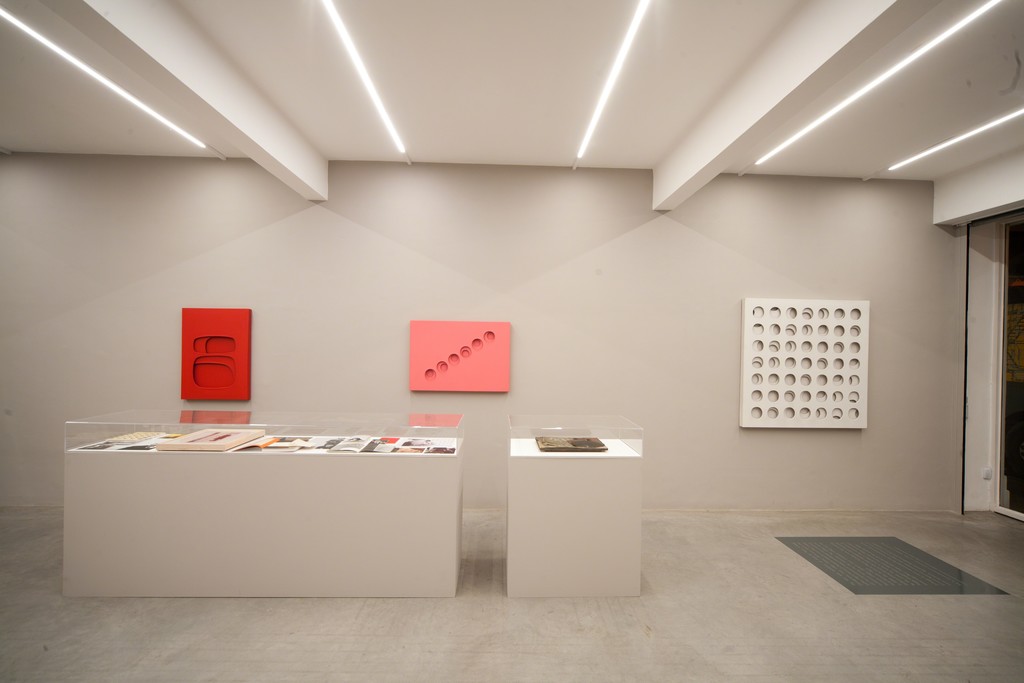 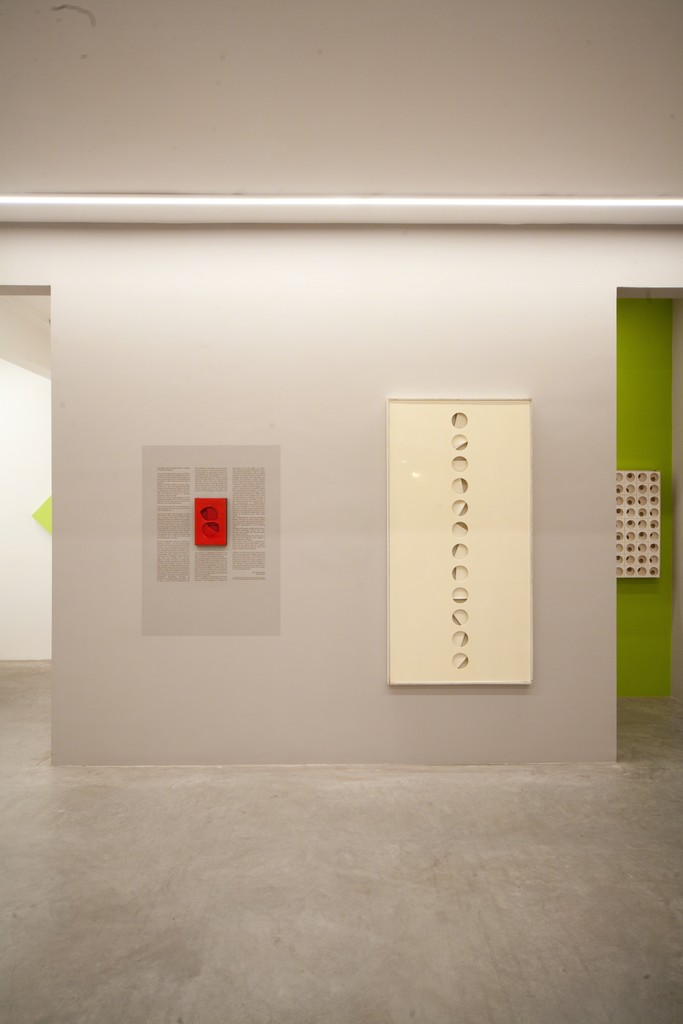 Paolo Scheggi (1940-1971) is most renowned for his monochromatic works of overlapping canvases, which he referred to as Intersuperfici or Zone Riflesse (curved intersurfaces and reflected areas). Scheggi’s volumetric works are most notable for pioneering the idea of ‘painting as object’, as noted by Gillo Dorfles in his essay “Pittura-oggetto a Milano”1, a concept he codified in 1966 in the exhibition of the same title, which was held at the Galleria Arco D’Alibert, Rome. This exhibition featured work by Scheggi alongside the artists: Lucio Fontana, Agostino Bonalumi and Enrico Castellani; and a catalogue that includes essays by Gillo Dorfles and Germano Celant. Germano Celant followed and admired Scheggi’s works, and says of this group of artists:
Their attention on elementary entities such as: the line, the point, simple geometric figures, rhythm, and the monochromatic surface in order to show that it is precisely the component parts of our perceptual apparatus that constitute the specific objective of their operation as tools of our ‘technique’ of intervention in the formation of behaviours.2
Between sculpture and painting, Scheggi’s three-dimensional works represent the physicality of the canvas in a poetic manner. Both transcendental and existential, with theirconcave and deeply shadowed layers of canvas, his works are both captivating to look at and conceptual.
Scheggi’s layered canvases are firmly rooted in art history, and have seen a massive resurgence of interest in recent years. Often seen as a successor to Lucio Fontana’s specialist observations; where Fontana askes the viewer to look beyond the canvas, Scheggi’s works take this idea further as they occupy the space of the viewer, making the
viewer look within.
His work is often discussed in the context of the Zero Movement, and compared to artists such as Piero Manzoni for his explorations with existentialism and the space-time continuum. Contemporary artists continue to explore themes which Scheggi pioneered such as, Anish Kapoor, and his investigation into the void.
In 2013, Centro per L’arte contemporanea Luigi Pecci, Prato, held a solo exhibition of works by Scheggi, which included a pivotal installation titled Intercamera Plastica e Altre Storie; a large scale work, originally displayed in 2007 at Galleria d’Arte Niccoli for the MIART (Milan).
Ronchini Gallery’s exhibition will present an exceptional collection of works exploring Scheggi’s fundamental motifs; a rare opportunity to view some of this artist’s most iconic pieces.
In January 2014, a fully illustrated catalogue will be published to accompany the exhibition.