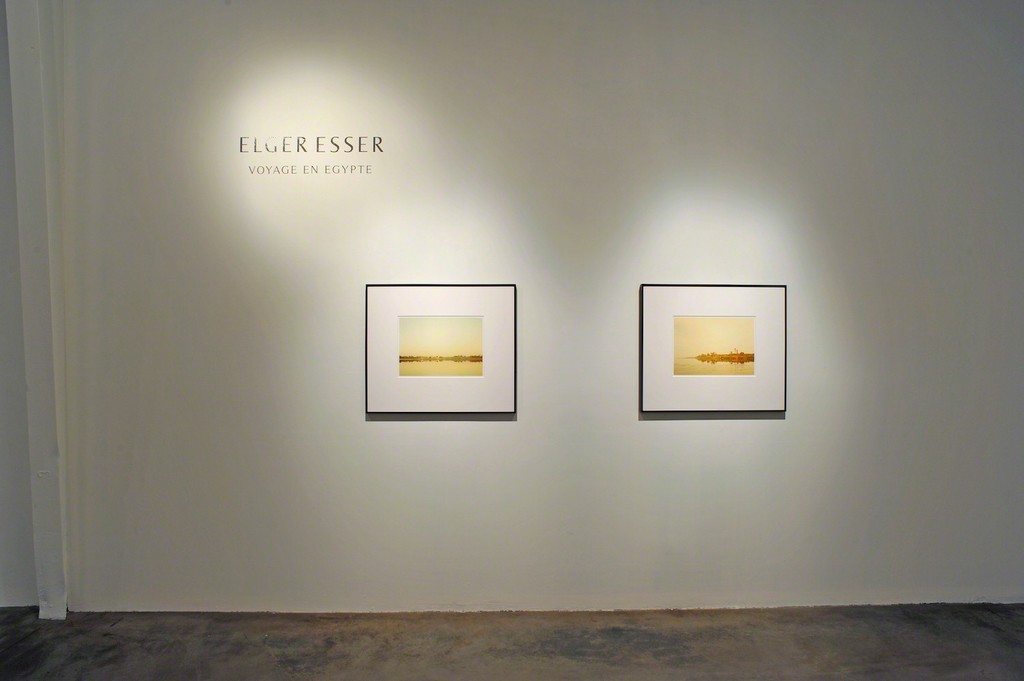 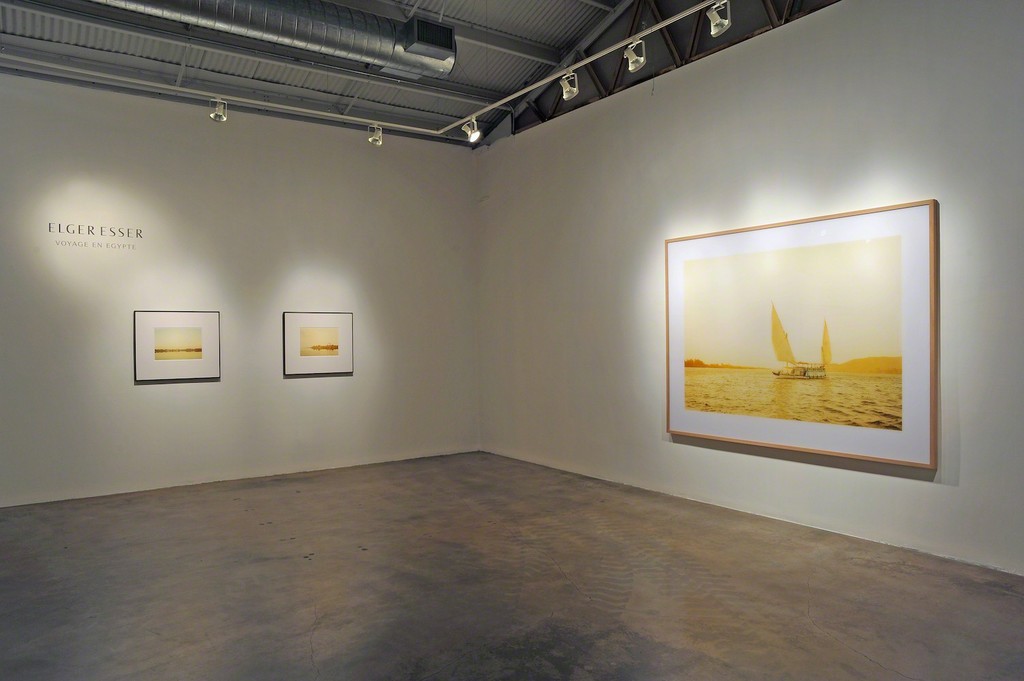 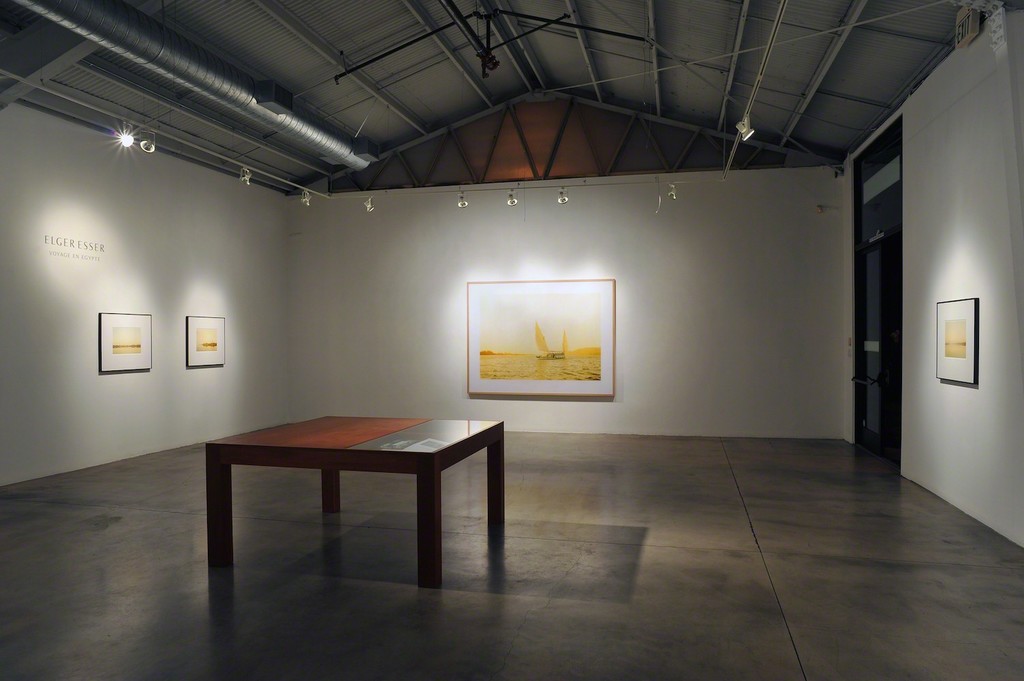 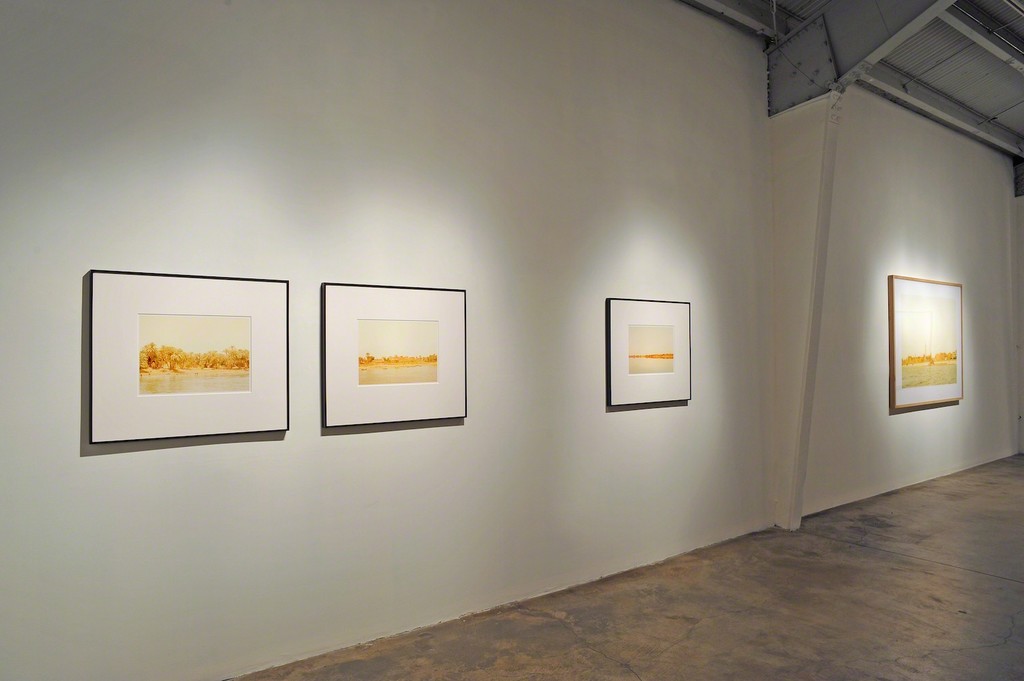 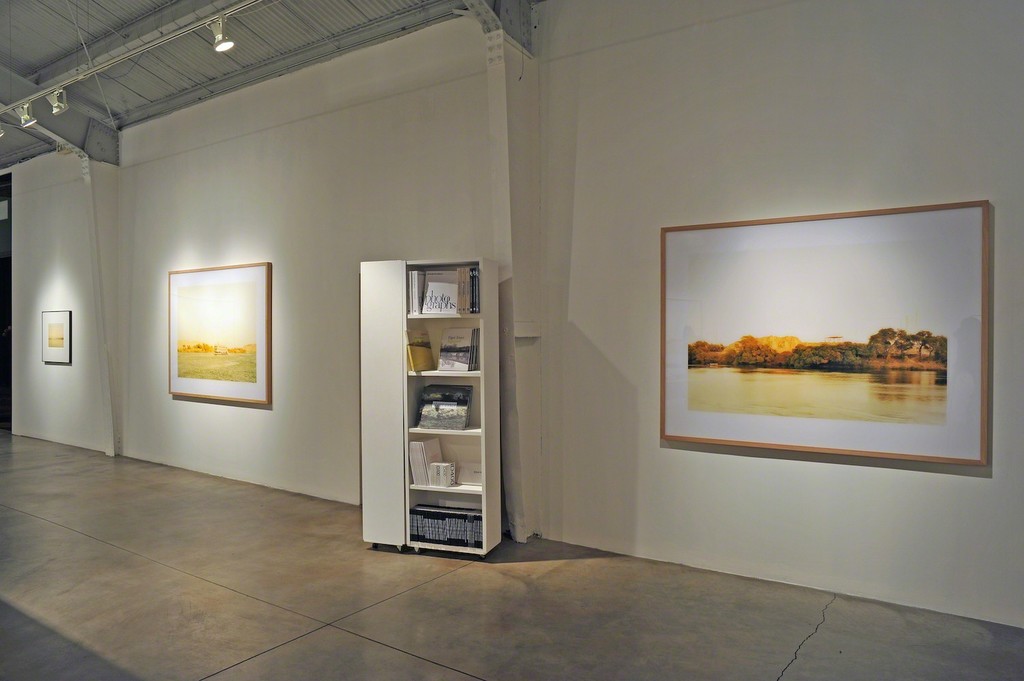 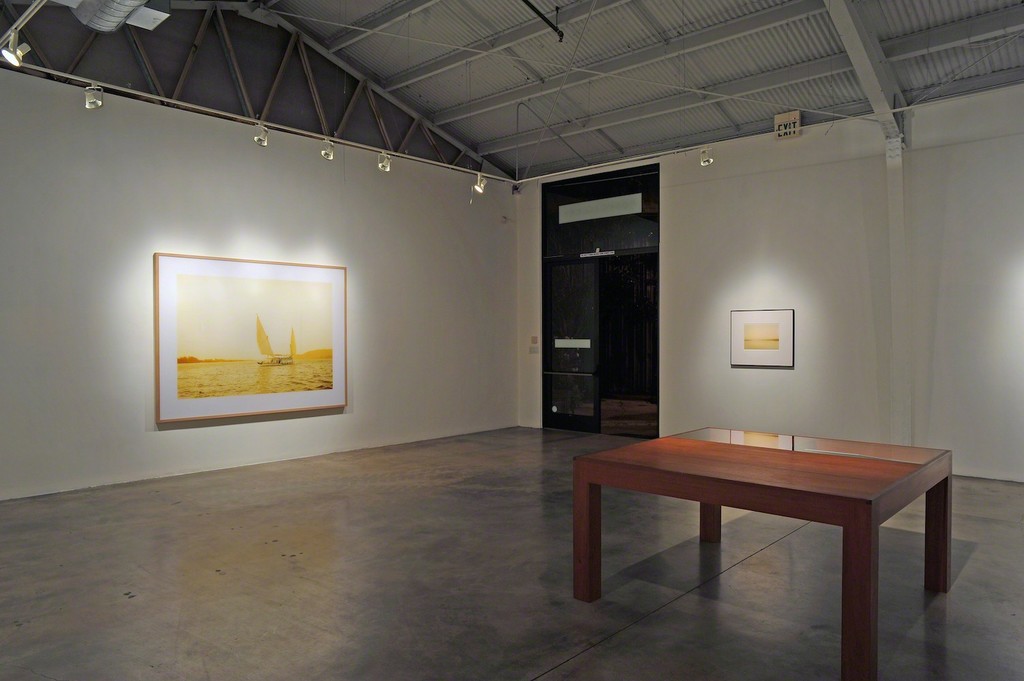 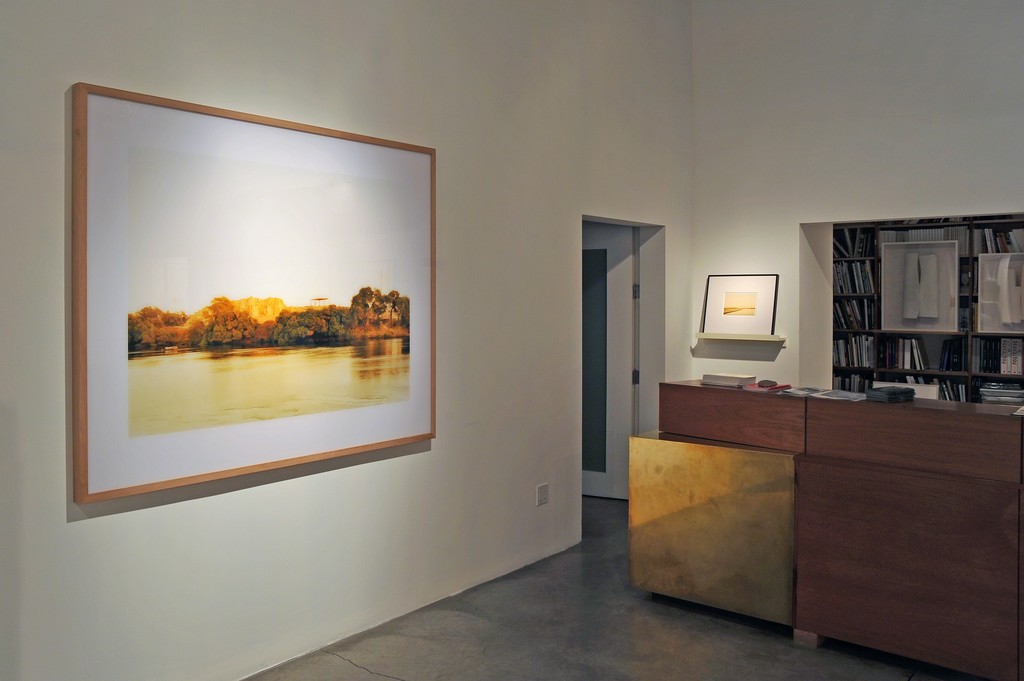 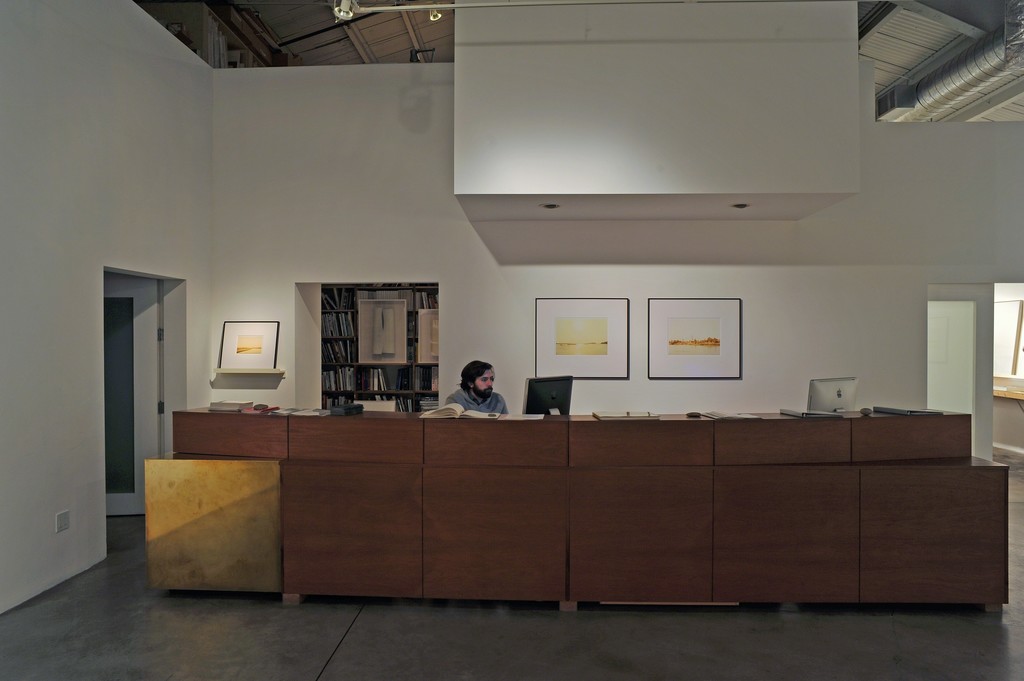 ROSEGALLERY is pleased to announce Voyage en Egypte – new photographs by German photographer, Elger Esser. The exhibition will be on view 03 December, 2011 through 18 February, 2012. A reception for the artist will be held Saturday, 03 December, 2011 from 6-8pm.

For his latest body of work, Elger Esser traveled along the Nile from Luxor to Aswan with an 8 x 10 land camera, photographing the banks of the river, traditional feluccas, dahabiyas, and fisherman. Taken from a great distance with the artist’s signature precision and formal grace, the photographs of Voyage en Egypte are calm, grandiose landscapes in addition to being provocative meditations on light, space and color. Large expanses of water and sky in dissipating pastel hues form the cornerstone of these compositions, while the land and civilization itself provide sharp but remote horizon lines which are dwarfed by the natural elements. Like 19th century landscape paintings, which are strongly echoed in these works, Esser’s latest photographs capture an element of the sublime in nature. The mystery and beauty of the river, which has been the lifeline of Egypt since the Stone Age, is elevated in these images, and like his previous work, they strategically blur the line between pure documentary photography and painterly concerns. RoseGallery’s exhibition marks the debut of Voyage en Egypte in the United States and is the first in-depth presentation of Esser’s work in Los Angeles.

Elger Esser was born in Stuttgart in 1967 and was raised in Rome. In 1986, he moved to Dusseldorf, where he worked as a commercial photographer until 1991. He then attended the Dusseldorf Kunstakademie, Studying with Bernd and Hilla Becher until 1997. His work has been published in several monographs published by Schirmer/Mosel Verlag including Vedutas and Landscapes, 2000; Elger Esser, Cap d’Antifer-Etretat, 2002; Anischten/Views/Vues, 2008; and Elger Esser, Eigenzeit,, 2009. He has been the recipient of numerous awards including the Kunstpreis der Stadt Dusselfdorf, Forderkoje Art Cologne, Friebe Gallery, and the Deutsches Studienzentrum Venedig. Esser’s pictures are included in numerous public and private collections including the Metropolitan Museum of Art, New York; the Guggenheim Foundation; Kunsthaus, Zurich; Stedelijk Museum Amsterdam, Netherlands; and the Centre Pompidou, Paris.