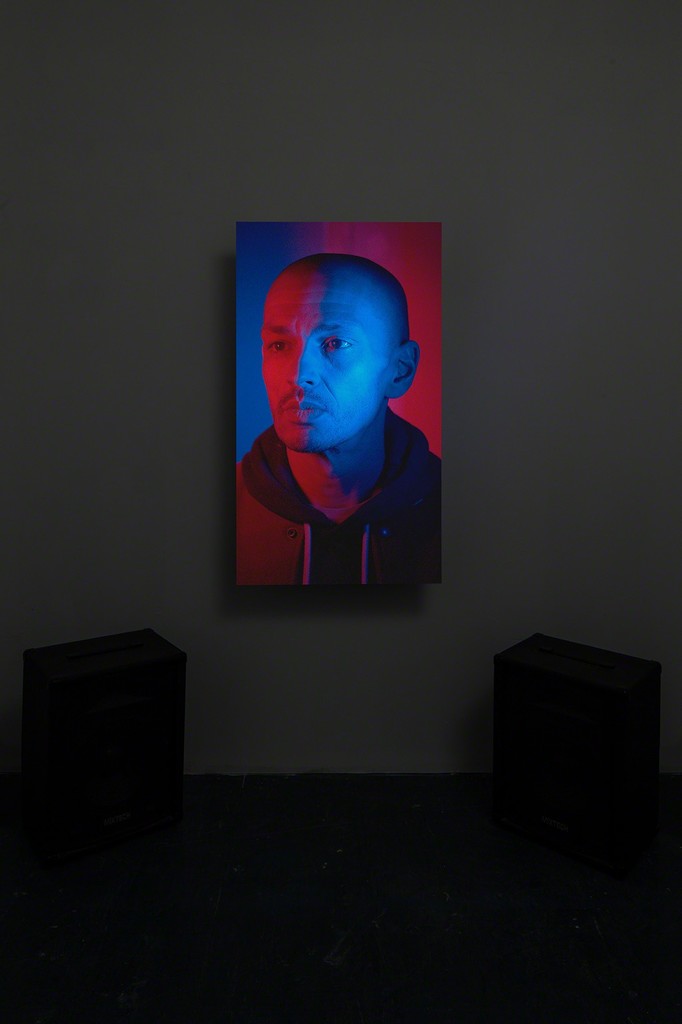 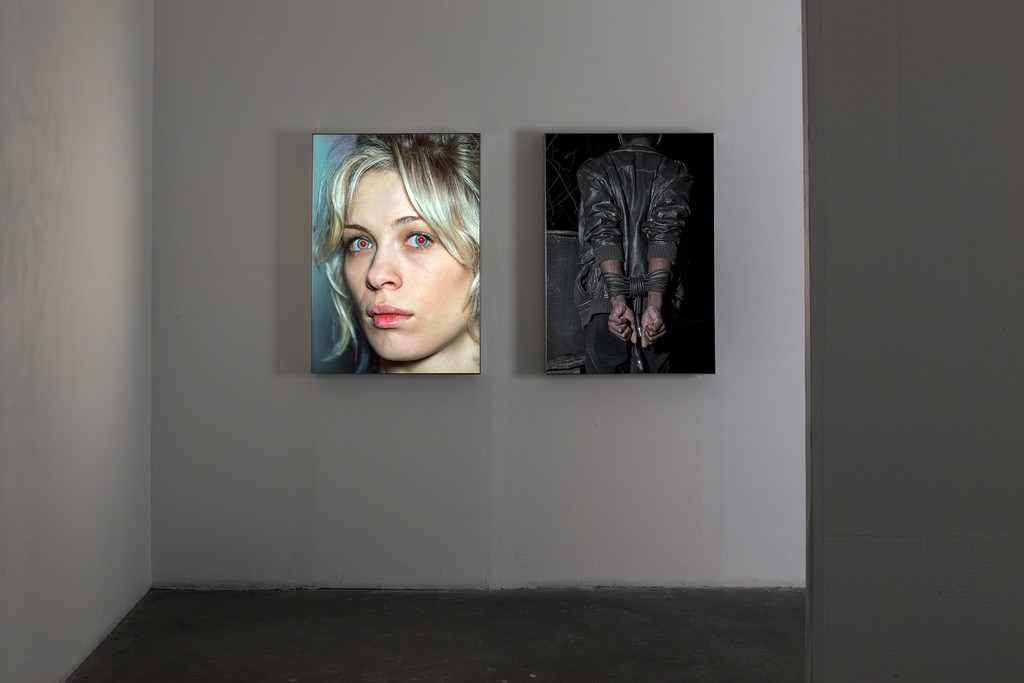 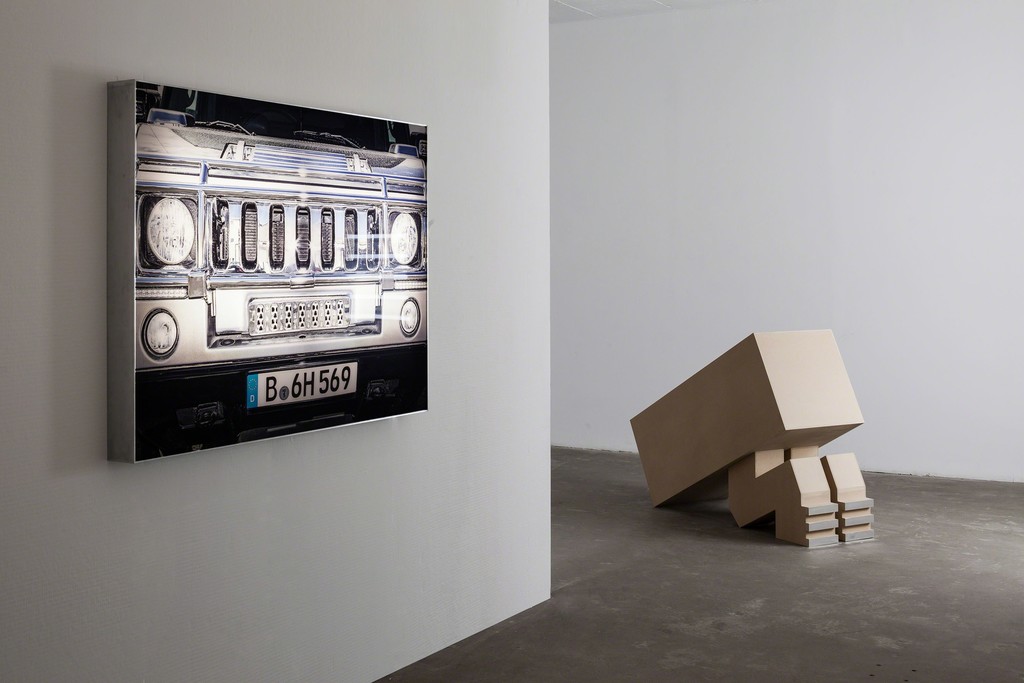 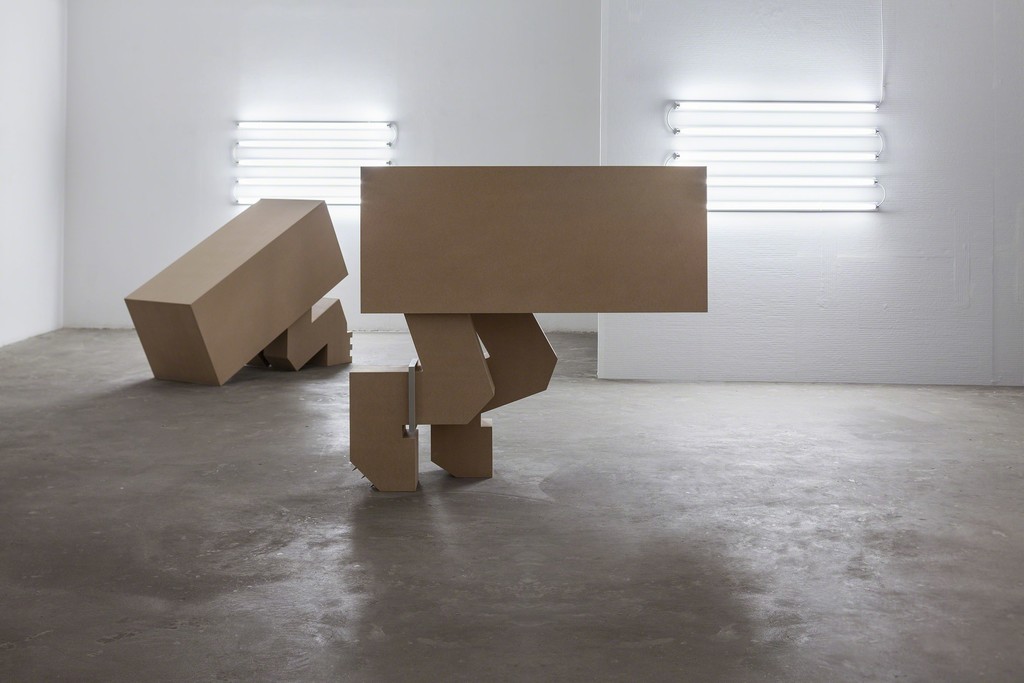 In the past two-three years, Alona Rodeh’s research and practice focused on the growing presence of audiovisual apparatuses of safety in the urban sphere, and their diffusions into popular (sub)cultural aesthetics. This evolved into a cluster of projects, all under the title Safe and Sound: a sound and light installation, presented at Künstlerhaus Bethanien and Herzliya Museum (2014), linking club culture and safety regulations of architecture; a sound piece based on sounds of sirens, and a sculptured homage to the Israeli „Iron dome” defense system at Petach Tikva Museum of Art (2015); Most recently, Rodeh presented a solo show and launched a new artist publication at Grimmuseum, Berlin (2015) that addressed the topic in a more abstract manner.

The exhibition Safe and Sound (Evolutions) at Rosenfeld Gallery follows the one at Grimmuseum. Shifting her monolithic installations into more fragmented forms, the exhibition includes 3 semi-figurative graphic sculptures, lit by blank light boxes. These are supported by photographed images from the Safe and Sound Deluxe Edition Poster series. A discreet video/sound work is also on show, presenting a portrait of a nearly still person, illuminated by flashing lights.

The Safe and Sound Deluxe Edition artist publication includes commissioned essays by Shachar Atwan, Fabrizio Gallanti, and Hillel Schwartz. The essays tackle, respectively, the history of high-visibility clothing, fire regulations in architecture, and nature of being sonically alarmed. A double-sided poster collection of 12 images, serve as visual counterpoints to the essays. Safe and Sound Deluxe Edition was published by The Green Box Art Editions, and made possible with the support of the Israeli State Lottery Council for Culture and the Arts (more info here).

Recent press:
The 50 Most Exciting Artists in Europe Today: Amah-Rose Abrams on Artnet, 25 November 2015
Nothing is Safe and Alona Rodeh’s ‘Safe and Sound’ Exhibition in Berlin, Hili Perlson on Artnet, 30 September 2015
Critics Picks, Alona Rodeh at Grimmuseum, by Ana Finkel-Honigman on Artforum, 8 September 2015

Alona Rodeh (b. 1979, Israel) is a visual artist based in Tel Aviv and Berlin. Since graduating her MFA at the Bezalel Academy of Art and Design (2009), her large scale sound and light installations, videos and sculptures have been widely exhibited in Israel and abroad, with solo presentations among others at Grimmuseum, Berlin (2015); CCA Tel Aviv (2013); Künstlerhaus Bethanien (2014); Plug In ICA Winnipeg (2012), Helena Rubinstein Pavilion, Tel Aviv Museum (2013). Performances have been shown, among others, at Zacheta National Gallery, Israel Museum, The 54th Venice Biennial. Artist website: www.alonarodeh.com

Today, it seems that alarms are almost obsessively sampled in different musical genres: horns in Reggae and Dancehall; police sirens in Hip Hop; air-raid sirens in experimental and Techno. Rodeh will share her personal view on the history of siren devices, mapping the parallel evolution of sirens in civil defence and music, from the early 19th century till our days. Her talk will include demonstrations of various sirens, carried out by Tel Aviv based musician Mule Driver, operating a variety of electronic, digital and hand operated sirens.

*The work is produced for and by Transmediale Festival, Berlin, and will premiere this upcoming February at HKW, Berlin. At Rosenfeld Gallery the artists will expose their work in progress.