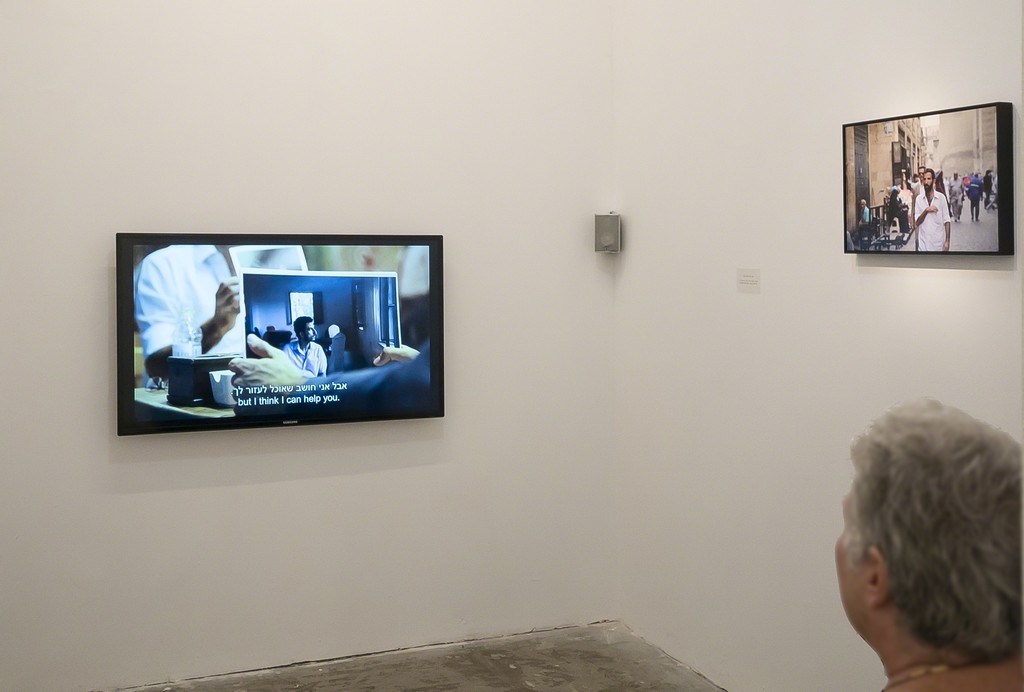 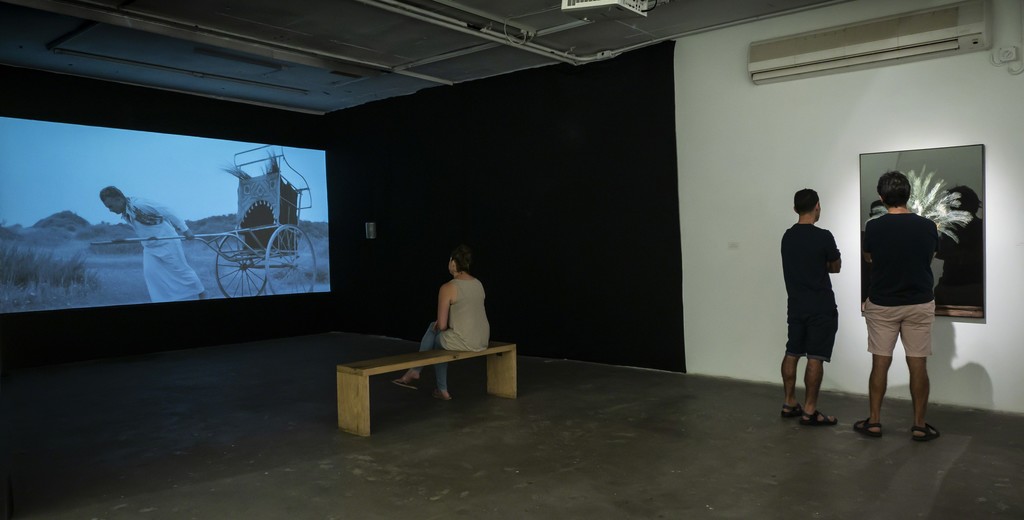 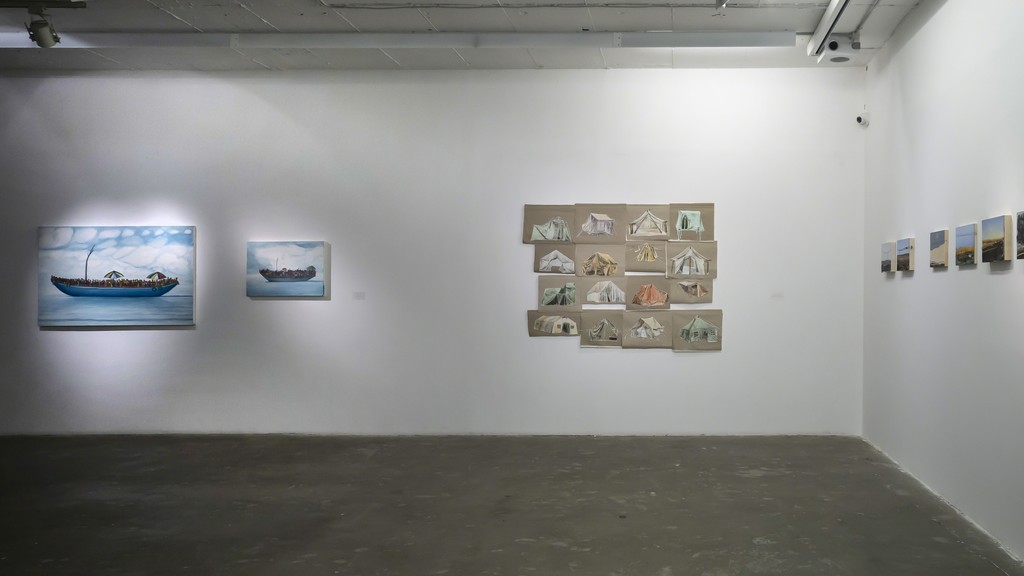 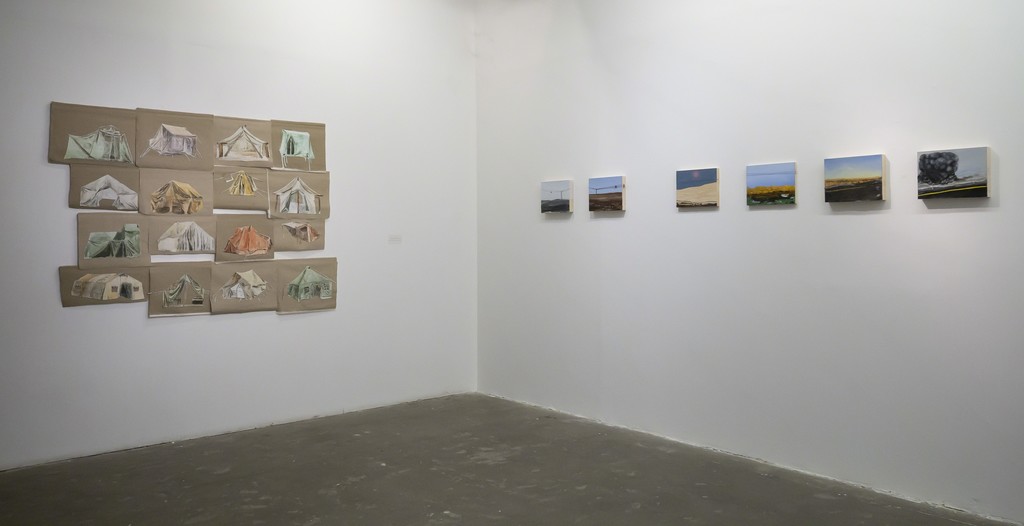 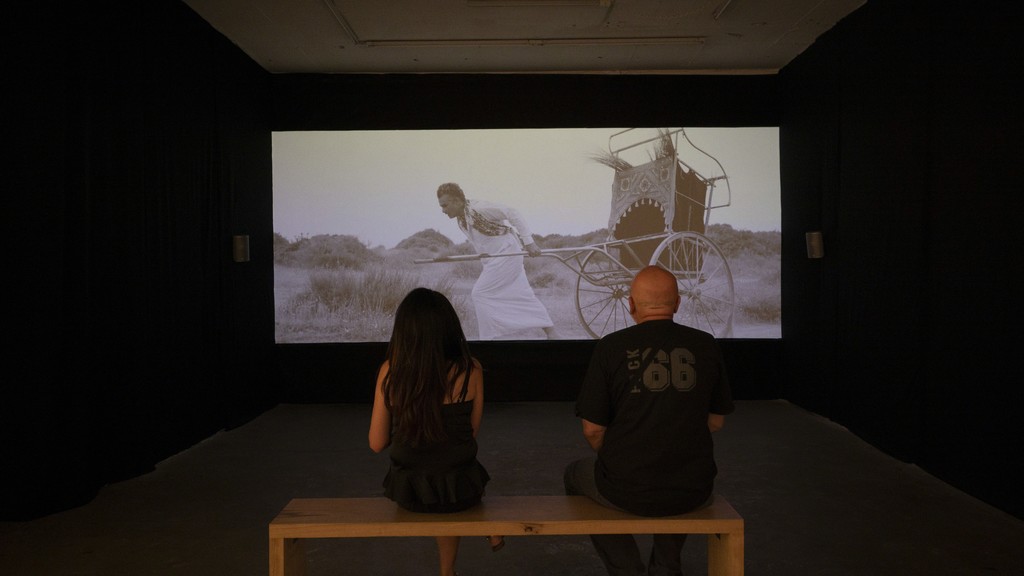 Traveling entails a promise - a beginning, an escape, an adventure. The artworks presented in the exhibition describe complex traveling situations: concrete, imaginary, metaphorical; representation of nomadism, immigration and displacement; search for an identity in unfamiliar territory.

The heterotopic situation of a car ride is present in Shirley Wagner's dense little collages. The passengers and the driver share the same crowded and intimate time and space. However, each is absorbed in his own thoughts and in landscapes passing before his eyes. The works divert the viewer’s attention from the (almost abandoned) road to the roadside - guardrails, wild fields, electric poles. The fictional landscape is the product of a personal and a collective memory, both local and global.

At the beginning of Tal Shochat's video work, Family Film, a train passes by - a sign of modern civilization in a familiar Israeli landscape. However, later on a convoy appears, from another place and another time. It is led by a horse-drawn cart, silently carrying the tribe leaders. Following them are men, women and children marching on a gypsy-biblical wandering journey to an unknown destination. As dusk falls, tents are set up and the camp is filled with occurrences.

The sixteen tents in Yael Oren-Sofer's series are empty, abandoned and absent of land, space and time. Is it an adventurous camping trip which was cut short, a family vacation that went wrong or maybe the cut-out tents, which were put back together with deliberate negligence, symbolize temporariness and detachment?

Zamir Shatz's boats paintings carry the names of exotic islands - Zanzibar, Jamaica, Malindi, a fantasy of white sand and an endless ocean. However,

Schatz's boats are not occupied with tourists seeking pleasure, but rather refugee-immigrants filling them to the brim. For them, Africa is not a destination for a pleasurable safari trip. Instead it is a place of conflict, poverty, and loss.

Traveling, transition and migration situations were and still are a source of inspiration and a starting point for exploring and creating an artistic identity. Liat Elbling's project Man in Suits began during the artist’s residency in Buenos Aires in a period of continuous news dramas, which she found difficult to understand due to the language barrier. Her cultural detachment was compensated by collecting images from the local press - mainly of politicians and businessmen, and later creating her own event narratives.

Tamir Zadok's works present different approaches regarding self-identity. In the Wonder Jew postcard series, the artist plants an image of himself as an Israeli soldier within various famous sites around the world, thus marking territory in a touristic "conquest" journey. The video Art Undercover describes a confidential trip to Cairo, targeted to trace the identity of the artist/secret-agent Charduval. During his mission, Zadok adopts an alternative identity with an attempt to blend into a foreign-familiar, hostile-favorable environment.

The exhibition offers the viewer an opportunity to travel along to these regions of fantasy and emotion, both above and below the surface, enjoyable yet disturbing.