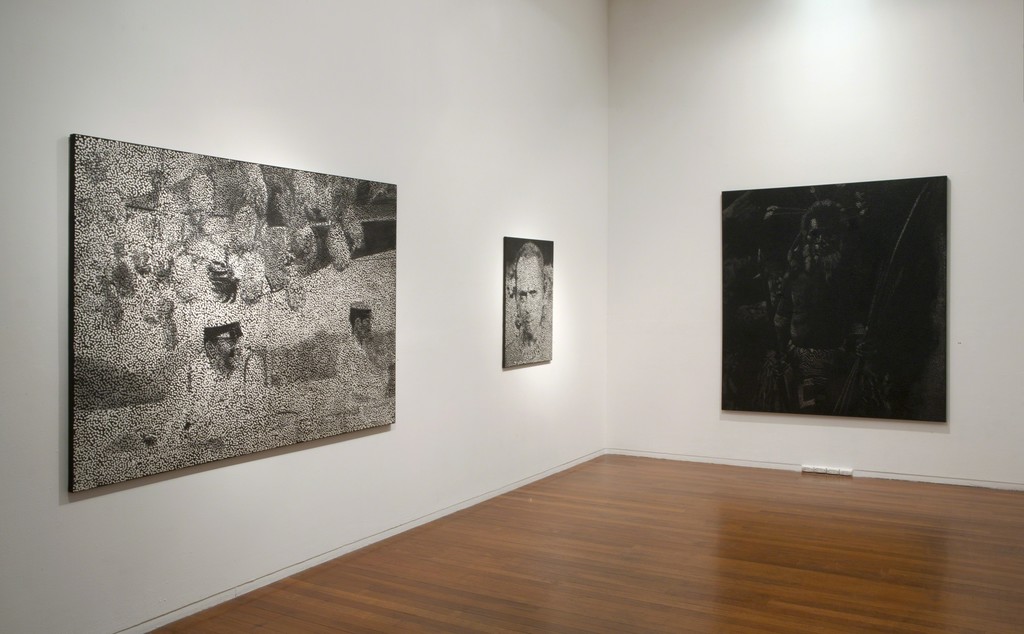 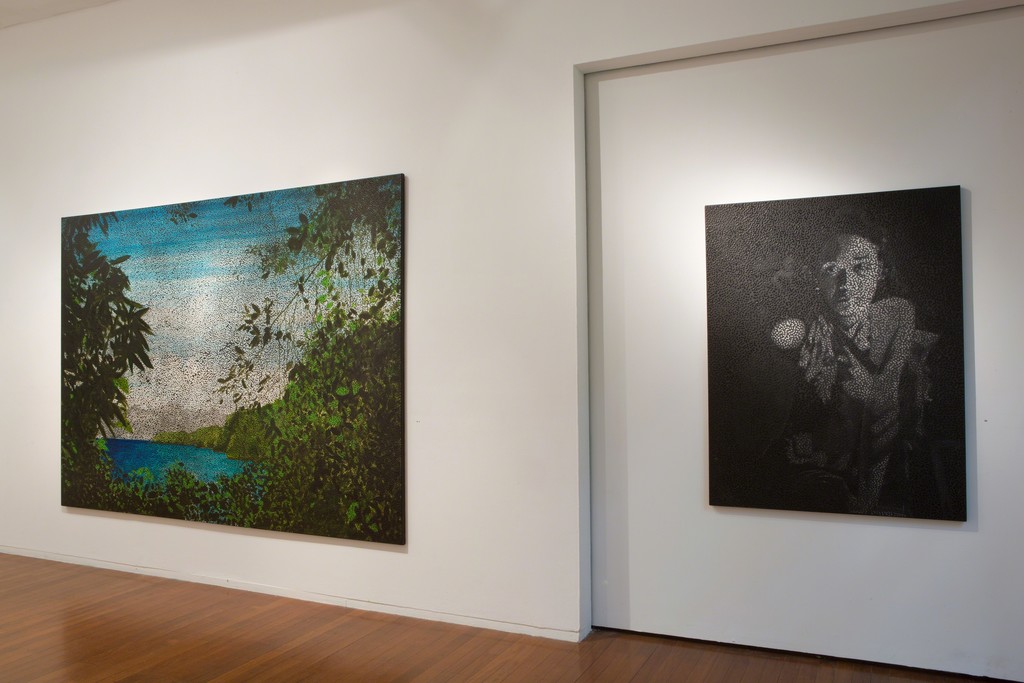 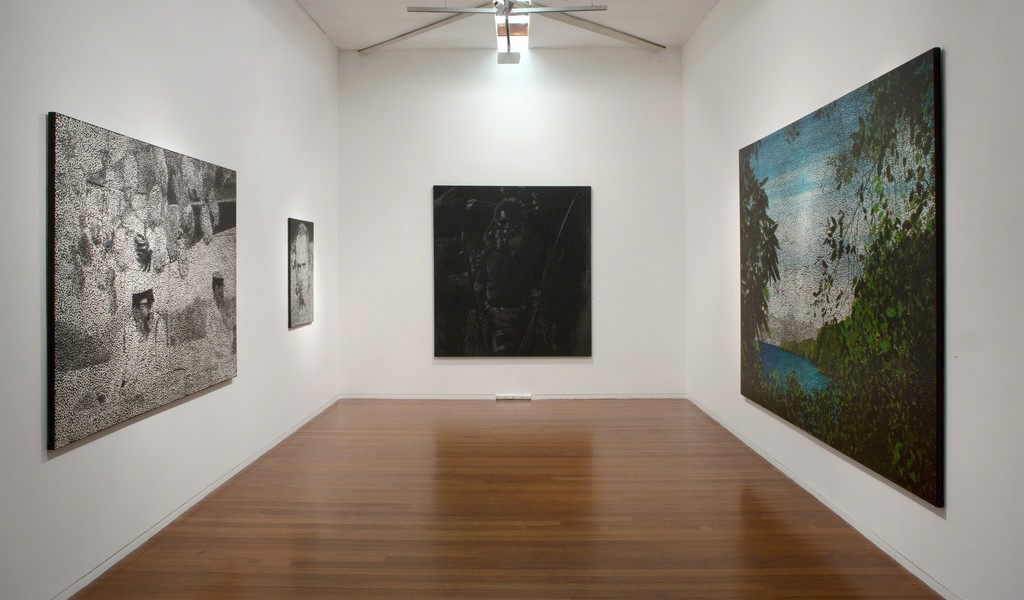 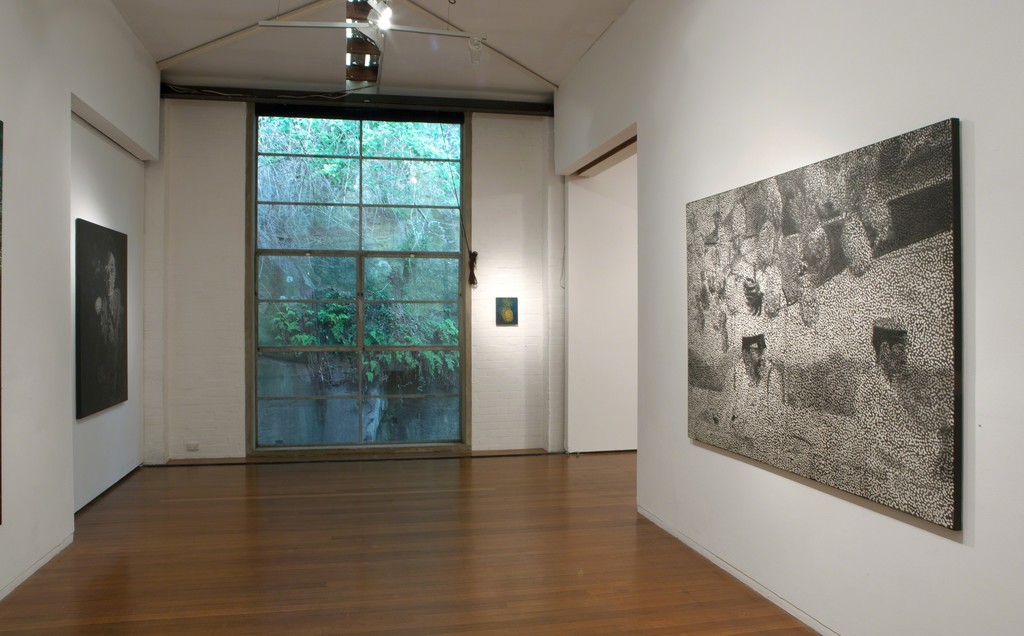 Daniel Boyd’s ‘history paintings’ are rich with narrative. Inspired by archival photographs, Boyd re-imagines historical moments in his work. A veil of resin dots is applied to each painting causing the images to shift between figuration and abstraction – depending on your distance from them. These dots or ‘lenses’ trap tiny sections of the narrative before the scenes are painted over in black. The resulting images are visible only through the shimmering glue lenses, a poetic analogy for the process of memory and the multifaceted nature of history.

The lush landscape painting in Pineapples in the Pacific reads like a tropical island paradise. The scene is a view of Pentecost Island, one of the 83 islands that comprise Vanuatu (formerly New Hebrides) in the South Pacific. Framed by undergrowth and overhanging branches, the inviting outlook suggests the discovery of ‘untouched’ paradise.

Opposite, Boyd has depicted two Europeans en-route to the Pacific Islands in a three-masted schooner, The Southern Cross. The figures are crowned by tropical pineapples and bananas stored in the bridge’s canopy and on the horizon an island emerges. In 1906 The Southern Cross embarked from Hobart on a tour of the Western Pacific as part of an ongoing series of Anglican Melanesian missions. Onboard this particular voyage was Tasmanian photographer J.W. Beattie, who was interested in the opportunity for exotic photography.[1] The two portraits of New Hebridian noblemen in Pineapples in the Pacific are based on photographs likely taken by Beattie during this trip.

The vessel’s tour included Norfolk Island, New Hebrides and significantly, Pentecost Island, where Daniel Boyd’s paternal great great grandfather was born. By re-imagining this period, Boyd is not only tracing his own cultural and visual ancestry, but also the lineage of Western art history. The haunting portrait of a young woman from the Marquesas Islands is inspired by a photograph of Paul Gauguin’s muse. Gauguin was a pioneer of Primitivism, a movement that celebrated the simplicity and raw power of Micronesian and African art. Boyd’s reworking of Gauguin and Beattie’s photographs in Pineapples in the Pacific unpacks this fascination with exotic cultures and considers the continually shifting approach to the ‘other’ in Western art history.

Daniel Boyd has been exhibiting his work nationally and internationally since 2005. Recent solo exhibitions include History is Made at Night, Artspace, Sydney (2013); The Transit of Venus, Tin Sheds Gallery, Sydney (2012); and Up in Smoke Tour, Natural History Museum, London (2012).

For the 2014 Sydney Festival Boyd has collaborated with the electronic duo, Canyons, on an audio-visual experience 100 Million Nights, that will premiere at the Sydney Opera House on 21 January. He has also been selected for the Canopy in The Domain where he will project his video work History is Made at Night (2013).

Boyd has been included in numerous group exhibitions such as Future Primitive, Heide Museum of Modern Art, Melbourne (2013); Under the sun: the Kate Challis RAKA Award, at the Ian Potter Museum of Art, Melbourne (2013); Debil Debil, curated by Marcia Langton, at Anna Schwartz Gallery, Sydney (2013); the 7th Asia Pacific Triennial at the Queensland Art Gallery | Gallery of Modern Art (2012); Crossing Cultures, The Hood Museum of Art, Dartmouth, USA (2012); and One Caption Hides Another, at Betonsalon, Paris (2011). In 2014 Boyd’s work will be included in the survey exhibition, Regarding Picasso: Contemporary Artists’ Responses to His Art, at the Musee Picasso, Barcelona.