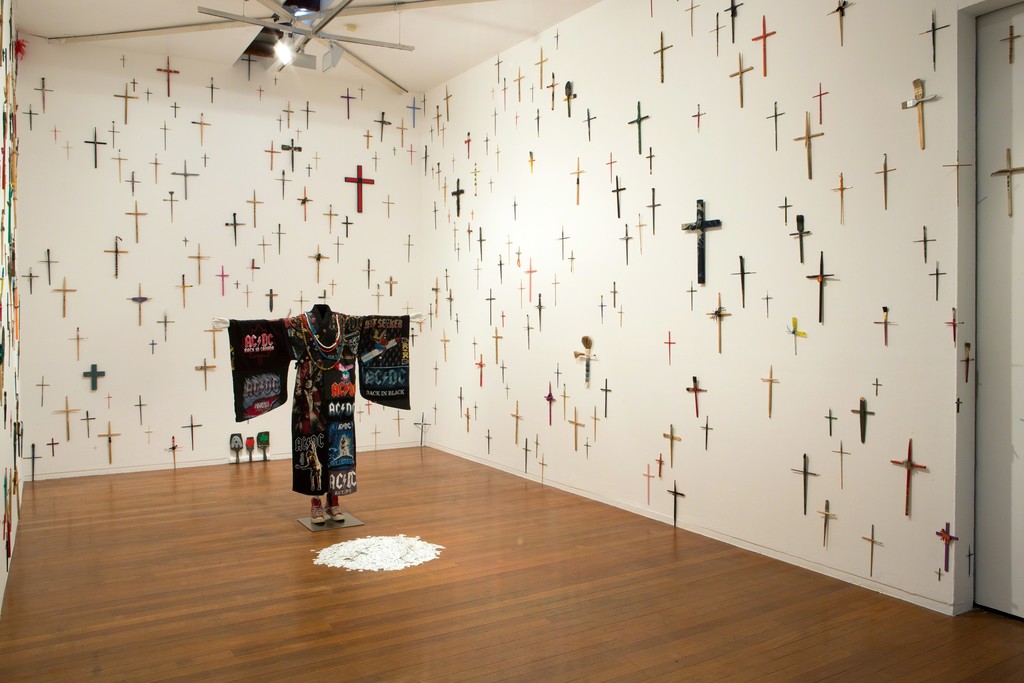 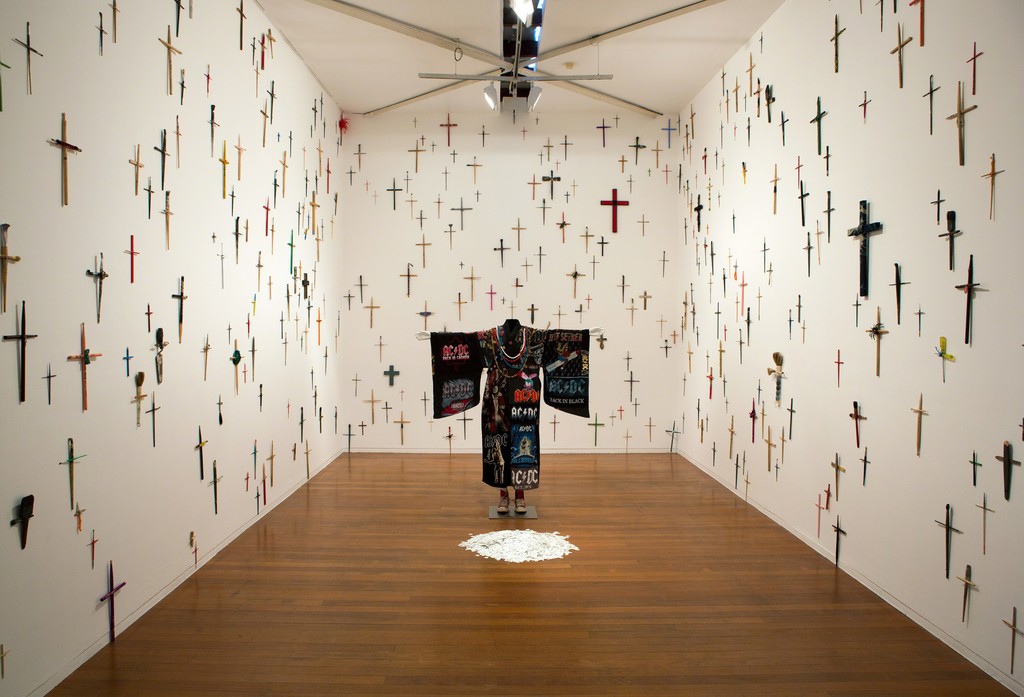 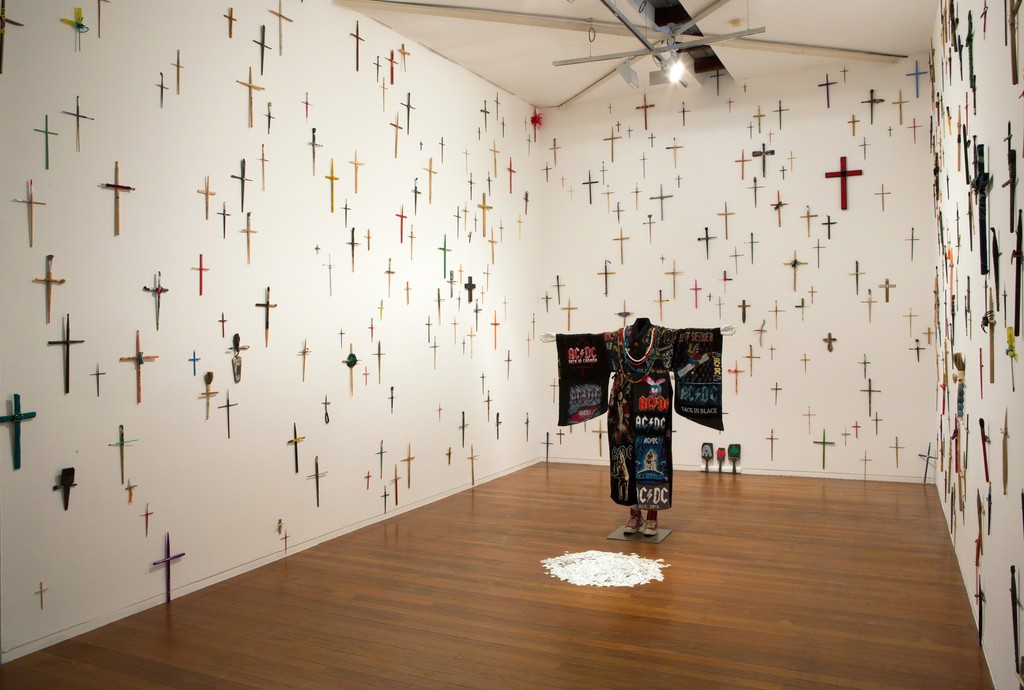 Jesus said, “Let there be light, and there was light”.
In the chorus to the song “Let there be Rock”, AC/DC unites Rock with this passage from the Bible.

In a long line of musicians who marry the sacred and the profane, the verses of AC/DC’s “Let there be Rock” further correlate the Biblical birth of time from the book of Genesis with the birth of Rock ‘n’ Roll in 1955. I throw a Buddhist twist into this mix and get LET THERE BE ROBE - a figure wearing a hand-sewn, Zen-Buddhist robe, made up of patch worked AC/DC T-Shirts standing in a room with plastered homemade crucifixes.

The crucifixes are made from used, broken, dirty, dead and dusted paintbrushes and drumsticks that were once used by artists and drummers - some famous, some anonymous, some living, some departed. Walking into this room one might feel they walked into a space of private worship and devotion – a Rock ‘N’ Roll chapel where the crucifixes seem necessary for a ritual known only to the robe clad monk.

Some of the AC/DC T-shirts were mine, while others have come from all over the world and represent the global experience of e-bay. The T-shirts are in various states of wear, from brand new to old with holes. The AC/DC font, just like the fonts of many other hard rock heavy metal bands, has medieval origins. The T-shirts display the anthems of the life and lust of the “uncultured” but somehow more “real” man and woman. e.g. “Stiff upper lip, Givin’ the dog a bone, Highway to Hell, Back in Black, Ballbreaker” etc. With lowbrow sexual innuendo, this is music of the masses, of “every town”, of my hometown and of my studio. Rock ‘n’ Roll literally, lyrically and aesthetically engages with sex and death and I have always loved that the word “AC/DC” is used as a colloquial synonym for bisexuality and by extension, for in-between places.

Let There Be Robe is Nell’s eighth solo exhibition with Roslyn Oxley9 Gallery. Next year, Nell’s work will be included in the Adelaide Biennial of Australian Art at the Art Gallery of South Australia. Earlier in 2015, Nell exhibited BLACK ‘n’ WHITE at the PS Project Space in Amsterdam. In 2012 the Maitland Regional Art Gallery held a solo exhibition of her work titled, Hometown girl has wet dream. In the same year the Museum of Old and New Art in Tasmania (MONA) commissioned a performance and installation for the festival MONA FOMA. Nell was also selected for Theatre of the World, at MONA (2012). Other recent group exhibitions include Light Play, University of Queensland Art Museum, Brisbane (2015), DAY FOR NIGHT, Project Space, Carriageworks, Sydney (2015), VIDEO FOREVER 22, UNSW Galleries, Sydney (2015), PULSE: Reflections on the body, Canberra Museum and Gallery, Canberra (2014), Theatre of the World, La Maison Rouge, Paris (2013), curated by Jean Hubert Martin and Transmission, Campbelltown Arts Centre, Sydney (2012). She was also selected to curate ARTBAR at the Museum of Contemporary Art, Sydney (2012). Nell collaborated with the Australian fashion label, Romance was Born, on their Spring/Summer 2011 collection, presented at Australian Fashion Week. In 2008 Gertrude Contemporary Art Space held a two person show of Nell’s work (with Michael Zavros) titled There Goes a Narwhal. Nell was selected for the inaugural survey exhibition 2004 – Australian Art Now at Federation Square, National Gallery of Victoria in 2004. In 2002 Nell exhibited her work Fly as High as Me in the Contemporary Project Space at the Art Gallery of New South Wales. Her work is held by the Museum of Contemporary Art, Sydney, the Museum of Old and New Art, Hobart, The University of Queensland Art Museum as well as numerous private and corporate collections nationwide.