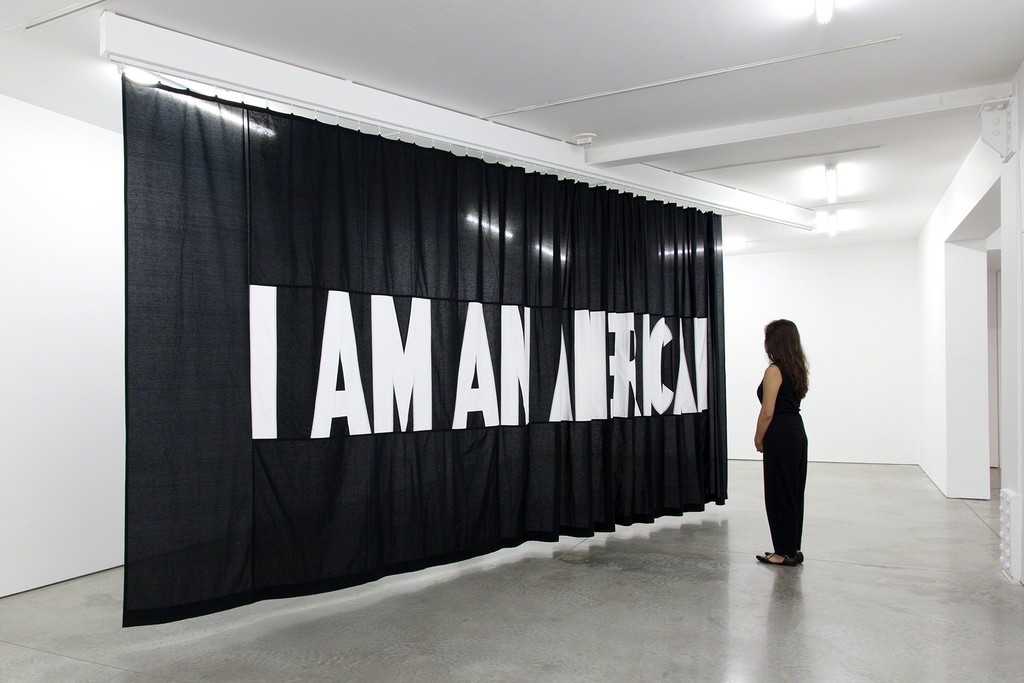 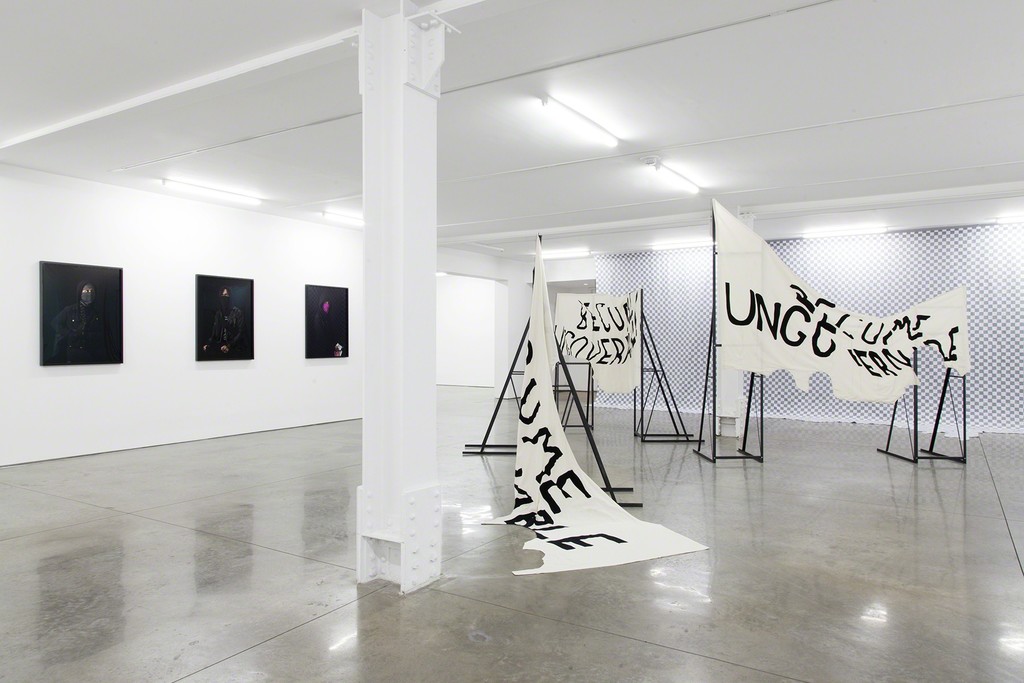 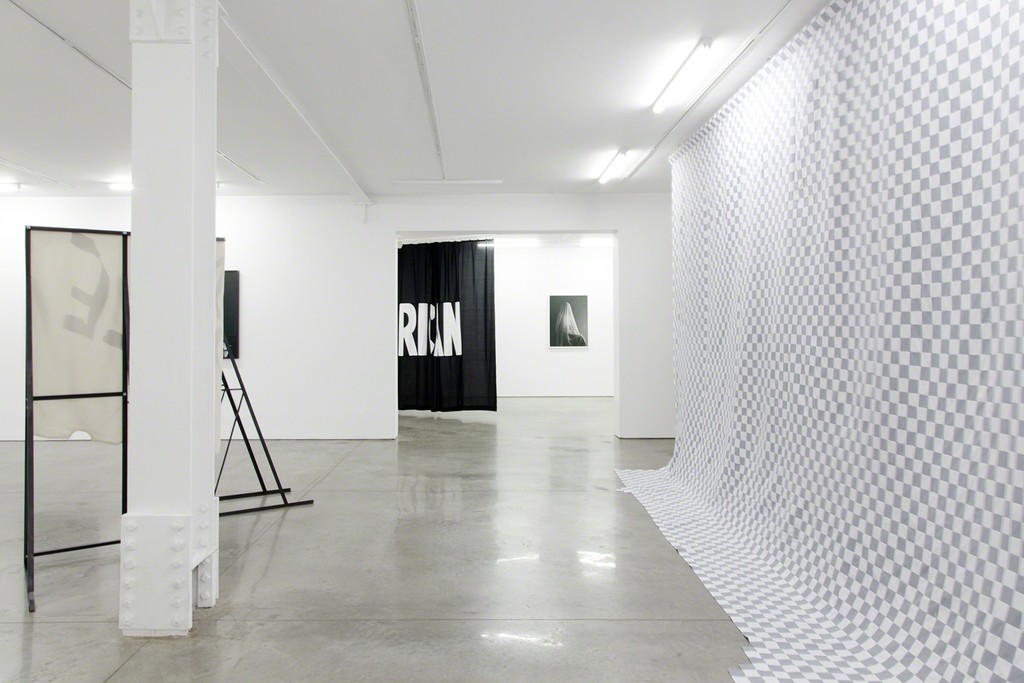 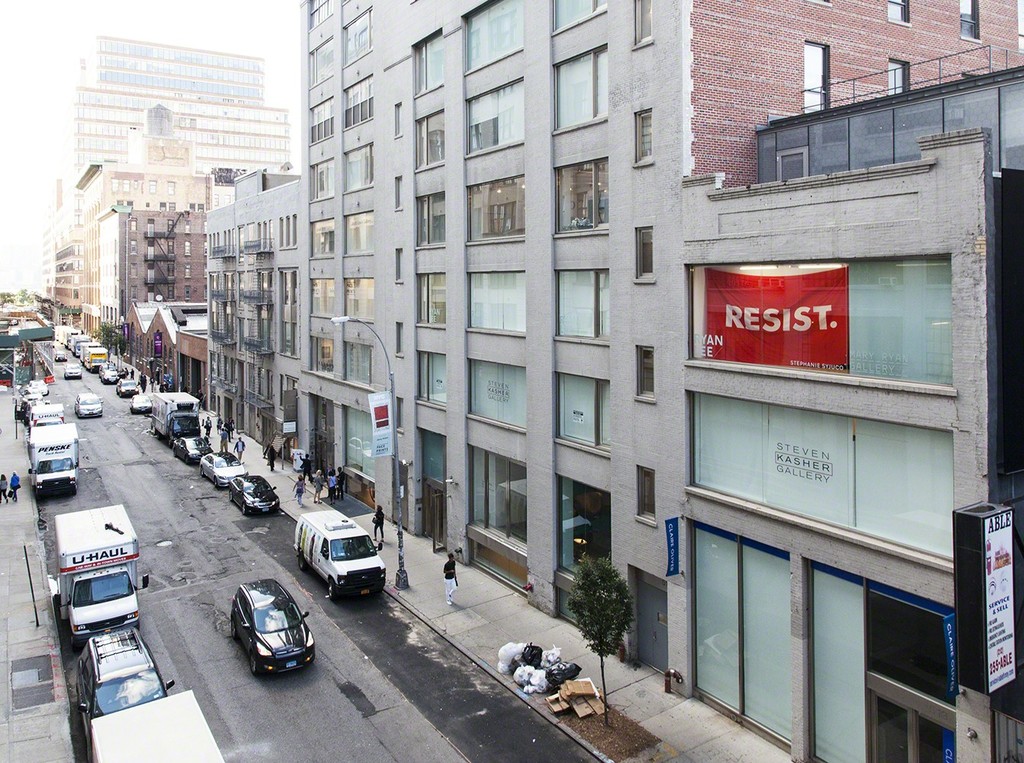 RYAN LEE is pleased to present CITIZENS, featuring new work by Stephanie Syjuco that probes philosophic and historic definitions of what it means to be a “citizen” in terms of national belonging, civic engagement, and radical responsibility. CITIZENS, the artist’s second solo exhibition at the gallery, consists of an installation of fabric banners based on iconic protest signs and a series of anonymous portraits of recently graduated college students whose basic identities make them vulnerable: queer, woman, of color, undocumented. Both the installation and photography consider the aesthetics of protest in the digital age with parallels to previous national movements, such as Civil Rights and Japanese American internment demonstrations. Crafting analog manifestations of digital content, flow and process, Syjuco navigates the distortion of images in the internet era and the effects of political upheaval as perceived by young citizens on the verge of adulthood.

One banner declares I AM AN AMERICAN, a reference to the sign posted by a Japanese American business owner following the bombing of Pearl Harbor, as photographed by Dorothea Lange. Another reads BECOME UNGOVERNABLE, the phrase adopted by anti-fascist protesters following the 2016 presidential election. The fabric panels of each banner open and close throughout the exhibition, at times obscuring certain words, the ultimate message wavering between legible and illegible. Syjuco sources the original photographs online, exploring how information and images can be disseminated or distorted, or how an altered image can eclipse the unedited version.

Four staged portraits present black-clad, masked “protesters” depicted by young UC Berkeley students who are grappling with an uncertain reality and their own precarious status in the current political climate. Each of the recent graduates is queer, of color, undocumented, or a woman, rendered anonymous by being covered up. In the style of graduation or formal studio portraits, the images are part fiction, part reality, offering a chance for each sitter to inhabit a temporary fantasy of themselves as an active resister while protecting their identities. Masks have recently become crucial for protesters, preventing identity discovery through facial recognition technology, crowd-sourcing, and other modern surveillance methods. In another portrait, a checkered cloth obscures the sitter’s entire body; this pattern makes tangible Photoshop’s grey and white transparency background, translating a digital tool into a material experience. An undocumented individual who received her college education through the DREAM Act, her status in the United States is now potentially under threat. Under protective anonymity, the former students claim a presence where their individual identities must be absent, occupying a tenuous space between invisibility and visibility.

Two still life photographs further explore the digital possibilities of Photoshop and digital rendering through chaotic compositions of protest props fabricated entirely in bright green chroma key. Like the transparency background, chroma key is a visual effects technique to create a composite image or video by separating color hues and making one color range transparent. The green fabric represents information that can be faked or re-presented for truth, transforming the meaning of the props and the intent of the protesters. When reality can be digitally invented or computer-generated, Syjuco confronts the conflicting interpretations of “citizenship” and what it means to resist and represent.