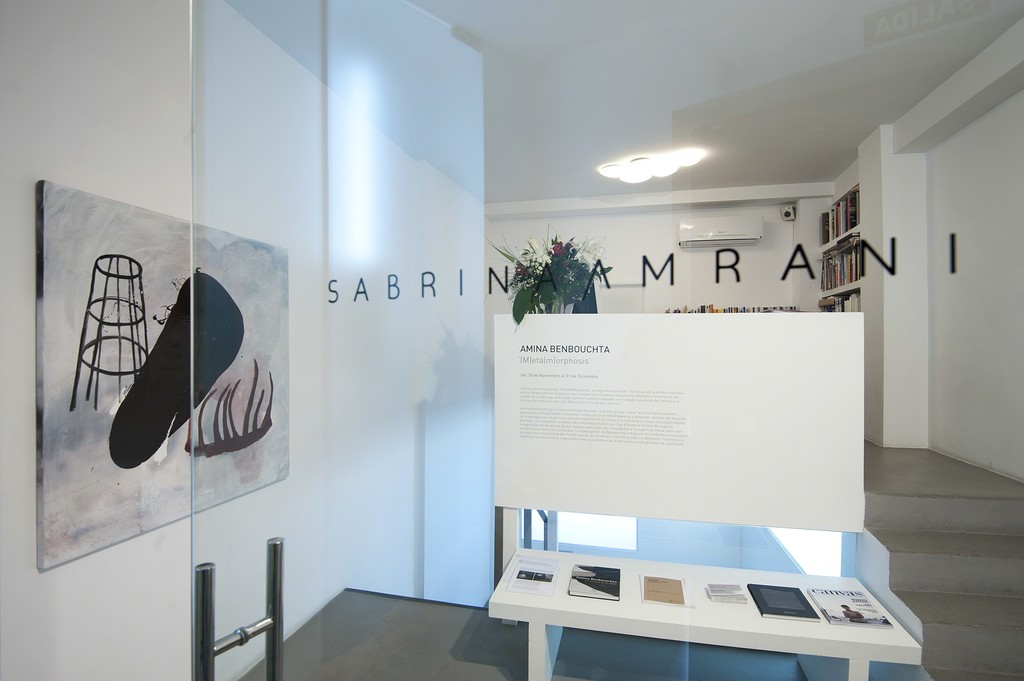 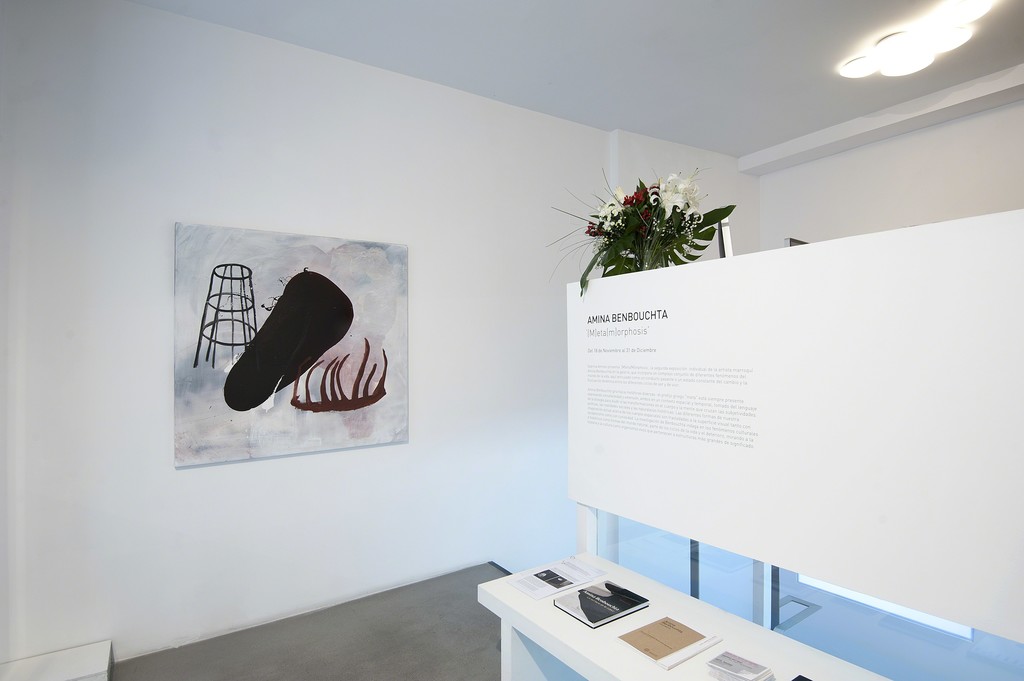 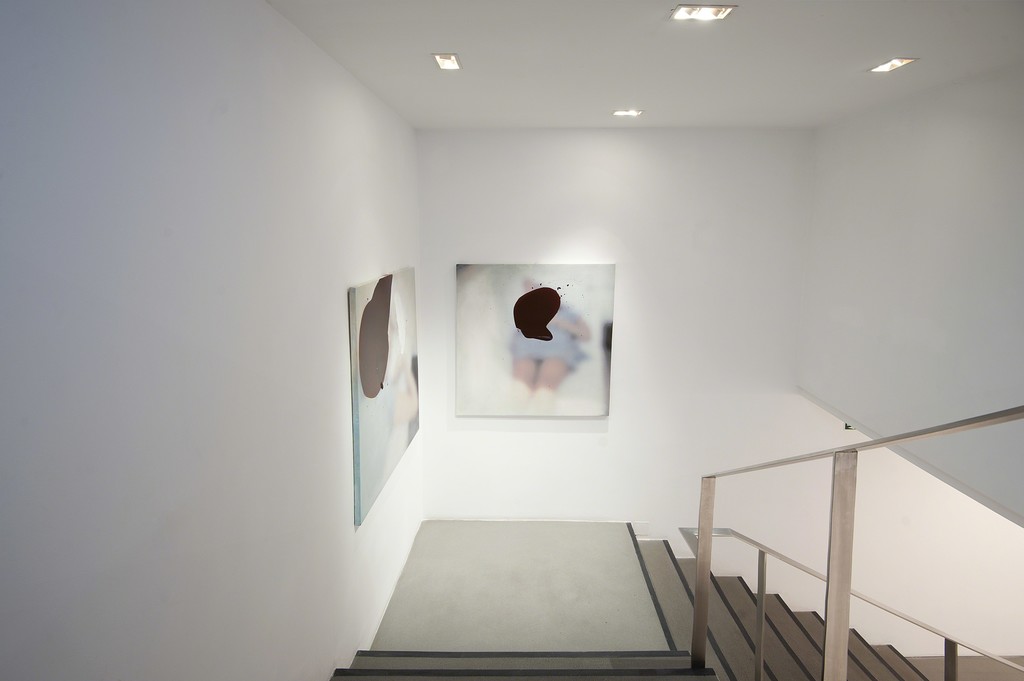 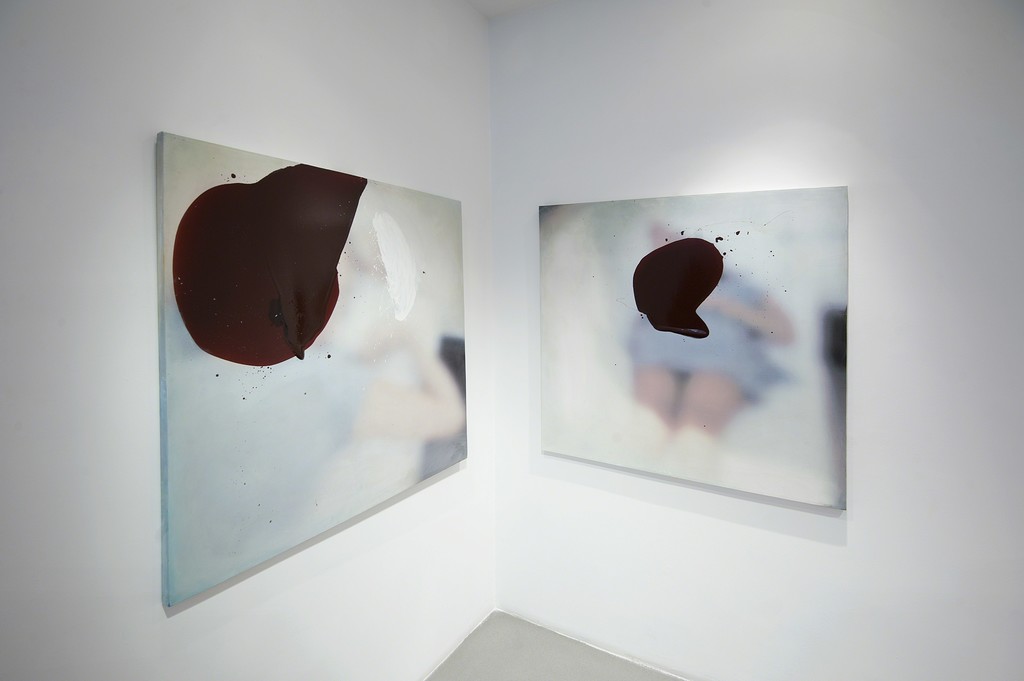 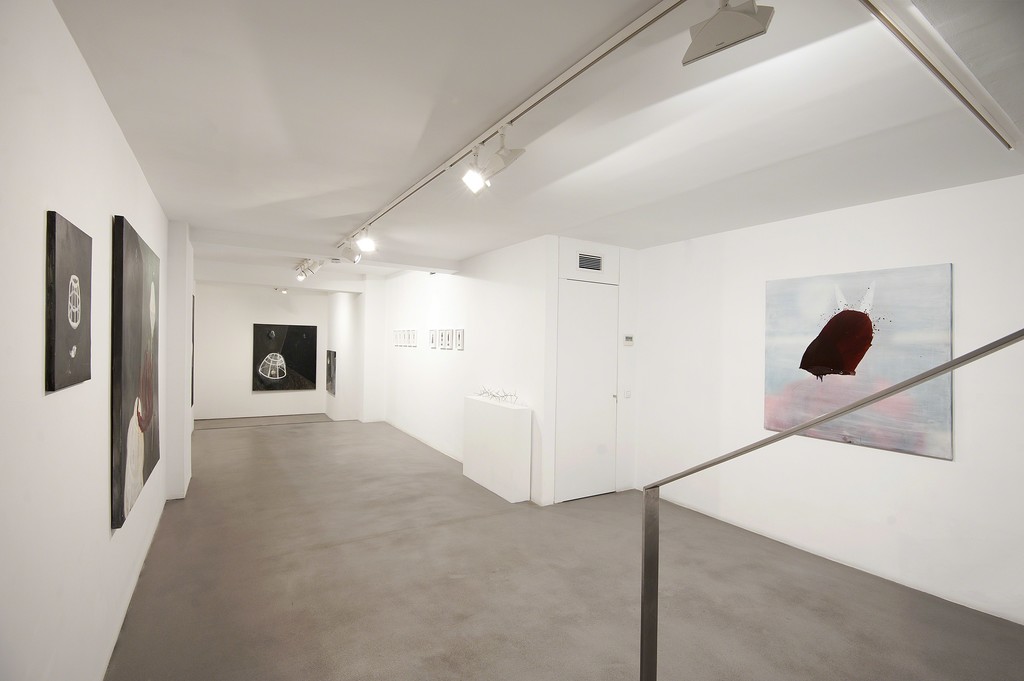 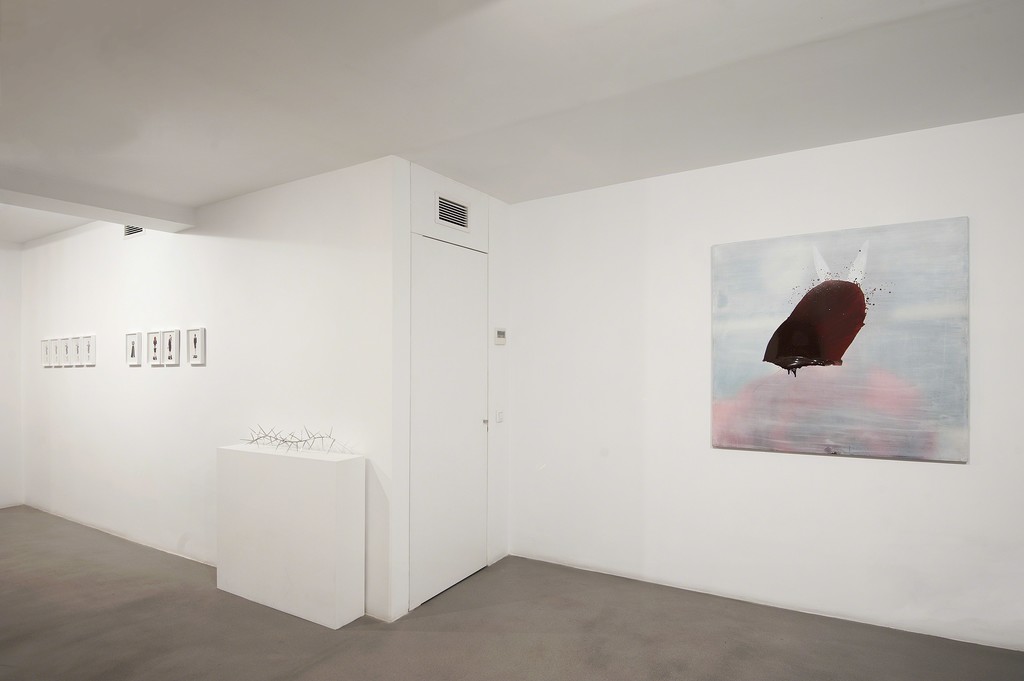 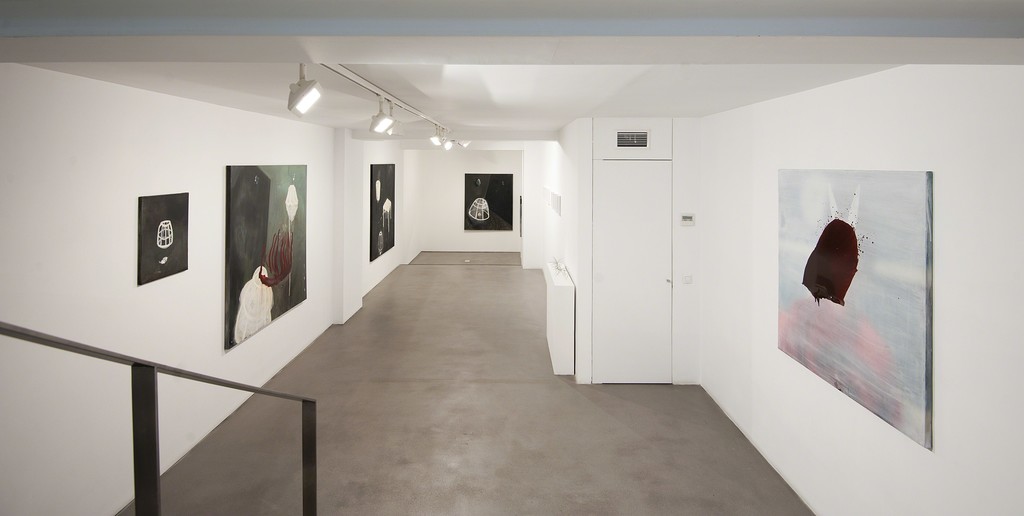 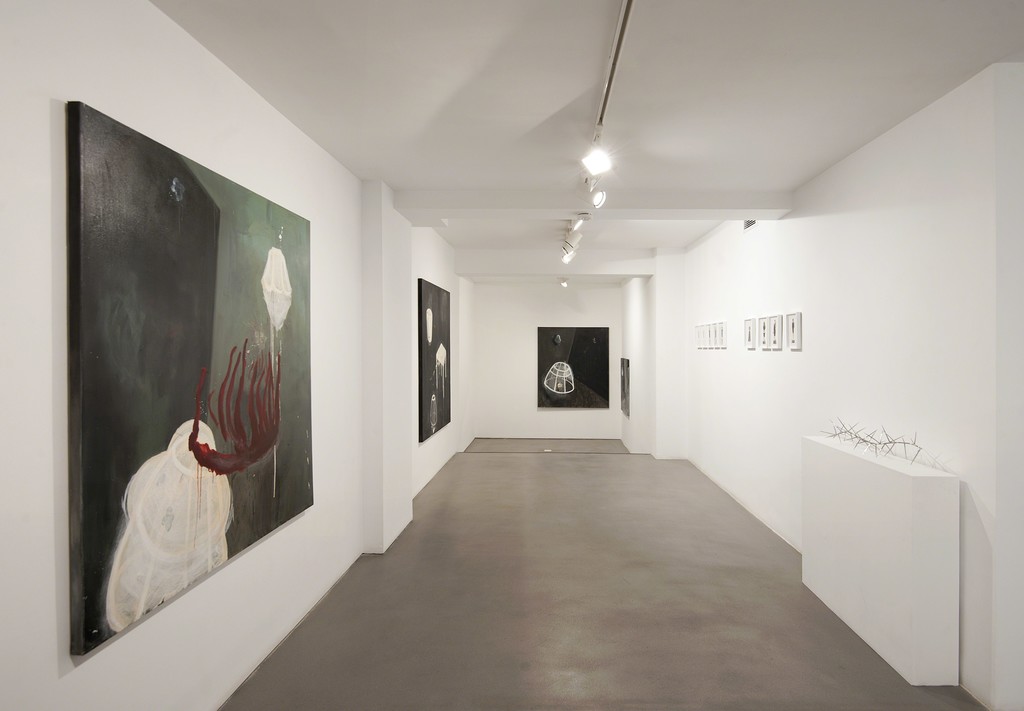 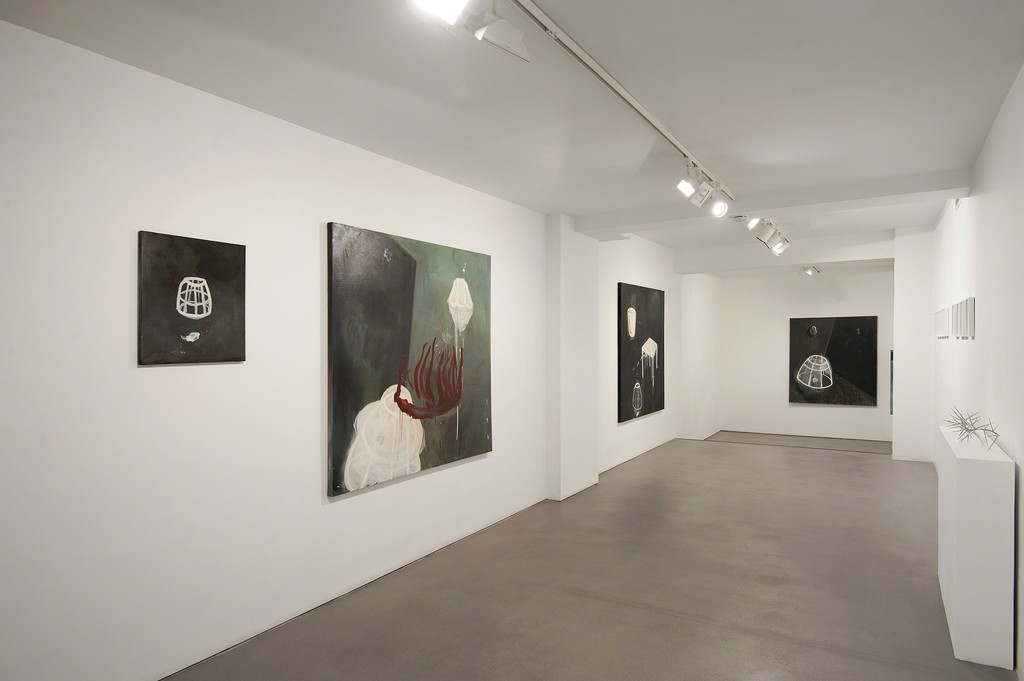 Sabrina Amrani presents ‘(M)eta(M)orphosis’, the second solo exhibition of Moroccan artist Amina Benbouchta at the gallery, embodying a complex array of different phenomena from the life world, here articulated as a through-passage or a constant state of change and dynamic fluctuation between different cycles of being and living. The artist turns to different metaphors –the Greek prefix meta is always present, expressing simultaneity but also extension, both spatial and temporal, borrowed from the language of nature, in order to address transformations in the body and the mind that cut across political subjectivities, social realities and historical selves. Different modalities of our current imaginary about spatial bodies is brought to the visual surface with both skepticism and curiosity.
Benbouchta’s investigation studies cultural and historical phenomena as forms in the natural world, part of cycles of birth and decay, looking at history and culture as living organisms that belong in larger structures of meaning. The artist reveals a part of her strategy in understanding the metamorphic phenomenon as an open reading of the female body and of the history of females –in the Middle East and around the world. The essence of modern bio-power is surveyed with the precise analytical language of images: As women are increasingly not the owners but debtors of their own bodies, these bodies become publicly scrutinized, shamed and ultimately shunned. While the artist is not directly addressing the politics and policies of representation, occult bodies are formed and revealed at the threshold of invisibility. Metamorphosis also touches on both desire and possession, and how bodies are internally changed by those mental activities.
In the first part of the exhibition, the Chrysalis photography series, Benbouchta makes reference to borderline psychological realities that blur the line between inside and outside. Themes of birth and re-birth conflate themselves with spatial movement and emancipation, each concept translating itself into the other, attempting to replace it. The Chrysalis makes reference to the pupa, the life stage of some insects undergoing transformation, in between the larva and the full grown creature. The possibility of different life stages within the probability of the lifecycle operates in Benbouchta’s photography as an abstraction for the process of muting and extinction of the female voice and gaze, at work in bio-power’s attempt to erase the feminine and replace with an inorganic, immaterial sexuality and gender that exists only as a mirror of mass-media images. The Chrysalis is a source of life, but it can also stand for the cage of patriarchal structures and religious indoctrination.
The different works on canvas, in the second part of the exhibition, depict desire and power in a different light: Metamorphosis can happen only through violence, through expulsion, and through force. Beyond the bare life of the organism, memory emerges in these paintings as opacity, the desire to cover traumatic memory or to reveal it. The viewer is never too sure at what end of the opaque glass are we standing, inside or outside? In her pictorial world, we are never completely on the outside, and never completely on the inside, negotiating syntactically the narrative possibilities of the world that once articulated into full spoken form become political utterances that configure the real. The transgression in the work is metaphysical and subtle, and highlight absence not by covering it but through making it manifest and final. Large fields of dark color flow throughout, cancelling out the panoramic view, and opening the channels of intuition and imagination.
In Amina Benbouchta’s work, presented in this exhibition, the artist is not turning to mythology but to science for theoretical help and inspiration: Dissecting images and visual processes in the same way that empirical science surveys cultures and histories, but without the methodological distortion of temporal distance. The artist operates in the here and now. Complex transformations effected in the female body are seen through the prism of intimacy and introspection, magnifying our visual capability to be curious and perplexed at the same time. While transitions and transformations are at the heart of the artistic languages and the political realities of today, Metamorphosis focuses on the specificity of change as a condition, even as a permanent condition. In a world in constant movement, it is difficult to pause and judge our own agency. The slow gaze of Benbouchta into this intimate world of birth and decay becomes a fixed horizon of interminability.