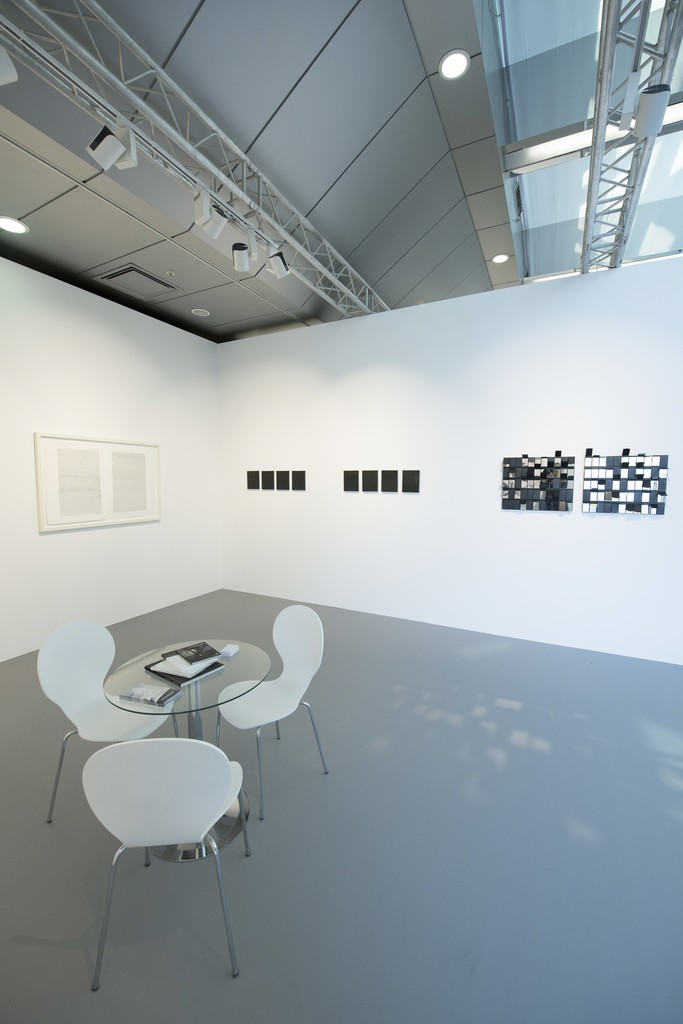 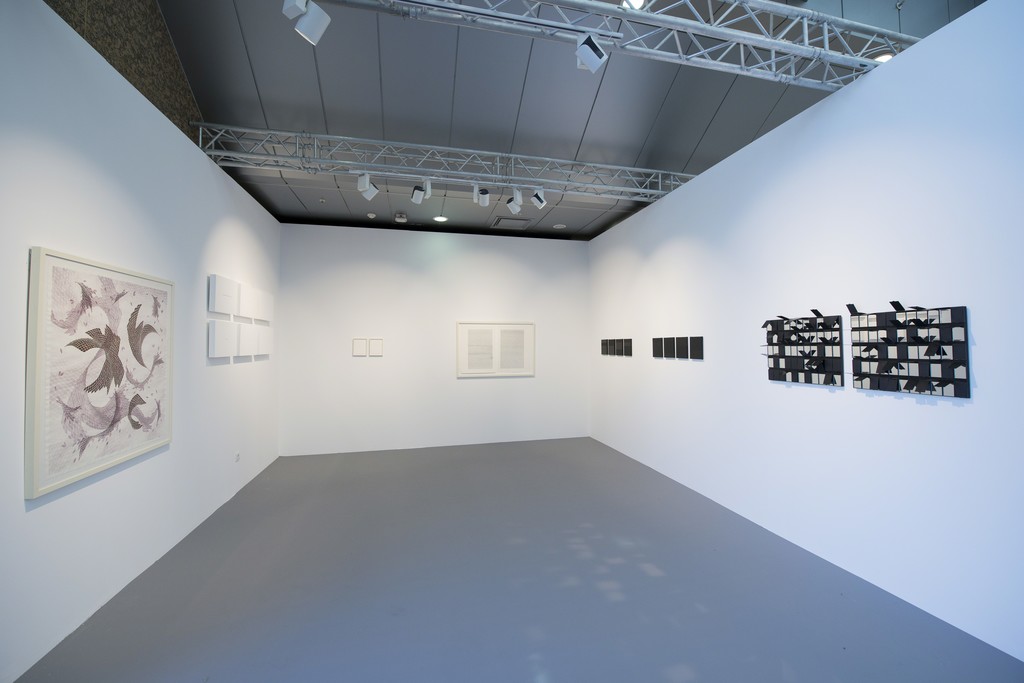 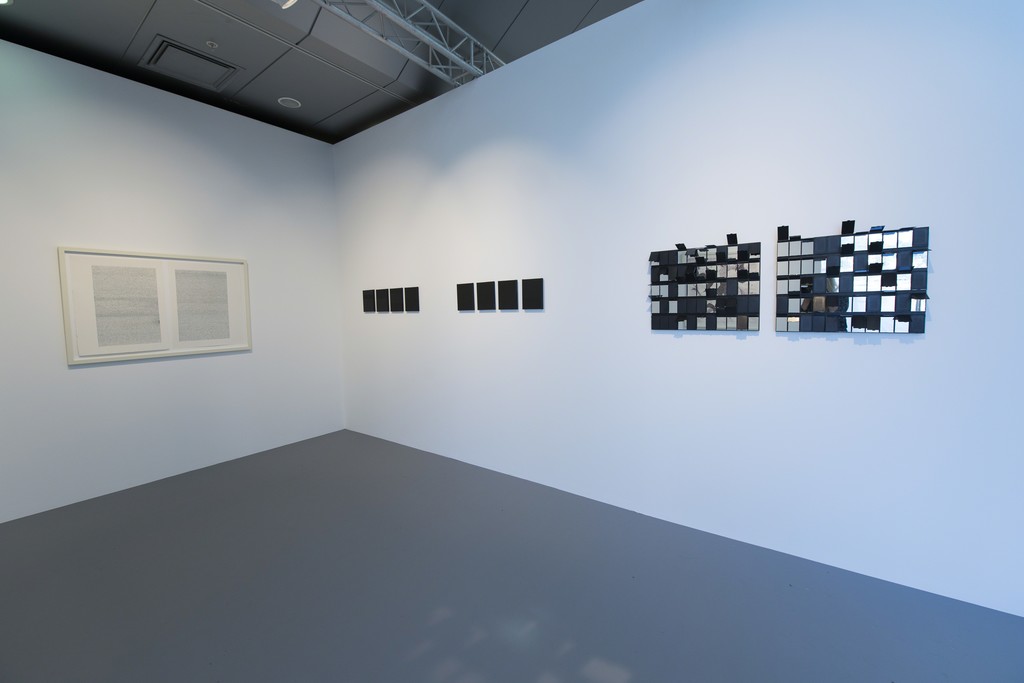 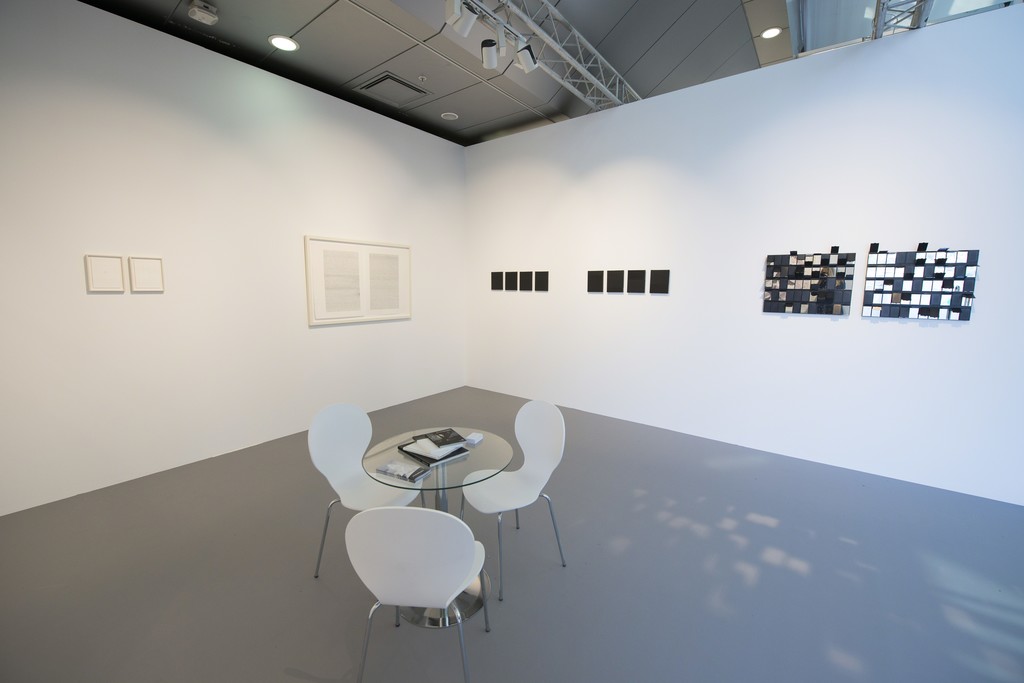 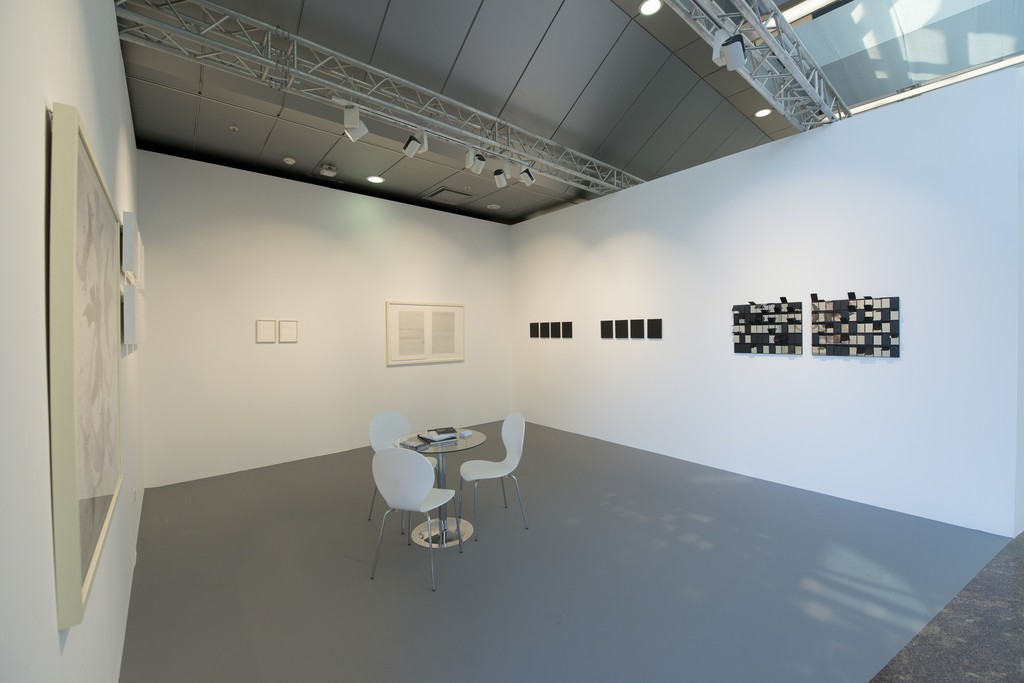 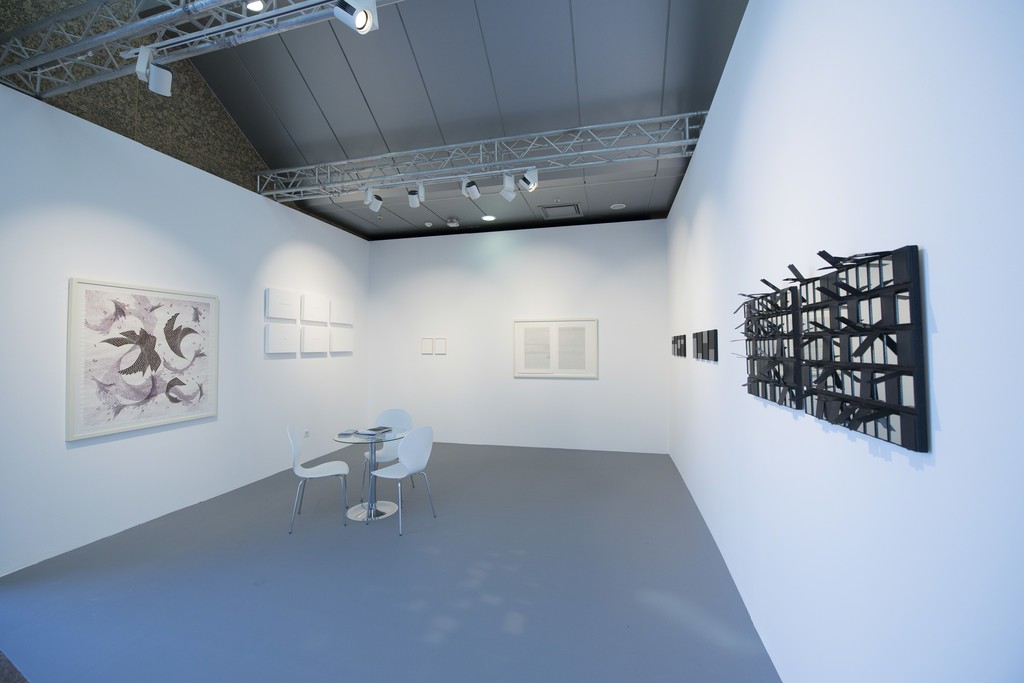 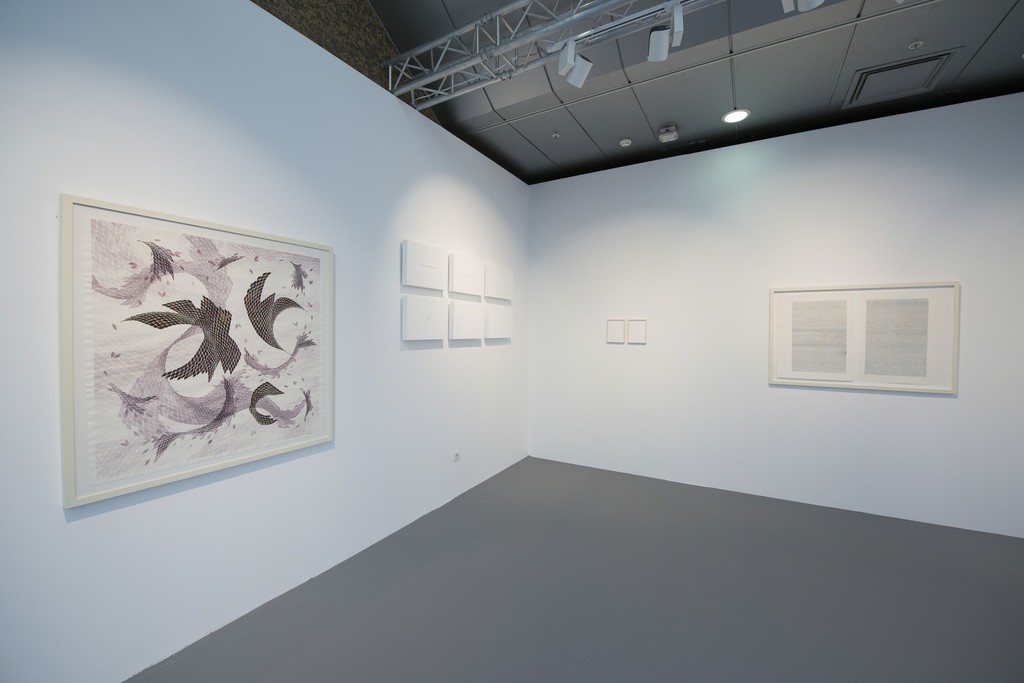 Sabrina Amrani announces the gallery’s first participation in Art International 2015 in Istanbul, with the group presentation “Signs/Language”, showcasing artistic practices embedded in the universality of the sign as a human gesture encoded with meaning. Five artists working in different latitudes, but sharing a common preoccupation with the self-effacement of translation between text, symbol and form, at the heart of contemporary visual culture, where production and reproduction of images has altogether replaced the acquisition of knowledge. Signs make reference not only to the mental representation of objects but also to abstract processes of meaning construction. Accordingly, the artists in “Signs/Language” treat language and languages in the broadest possible sense.

In semiotics, the value of a sign is never absolute or fixed, but rather, it is determined by its relative position and relations in the system of signification of which it is part; the sign cannot acquire value in isolation. The content of a sign is ought to be ultimately determined and delimited not by its internal configuration but by what surrounds it. The context of signs such as logograms, speech acts, chromatic units and grammatical morphemes, articulates its meaning by both opposition and contradiction; both natural and formal languages are born out of this conflict of semantic and semiotic interests. As the horizontal relation of values between signs is distinct from the hierarchical relation between signified and signifier, signs are oftentimes muted, depending on our relative position in the order of meaning.

The practice of art, since long posed as a language –it is in fact from prehistoric art and the earliest representations of symbols that the earliest logographic languages were born, resulting in our modern alphabets, has taken in this presentation on the crisis of the sign, a defining feature of the modern era, accentuated by the dynamics of globalization, temporal seamlessness and monetization of the symbol. Different perspectives, from alphabetic diacritic marks to lexemes to composite texts, addressing manifold varieties of language and communicability –or the lack thereof, are showcased here, highlighting the imprecise nature of thoughts and ideas, and the instability of representation characteristic of faculties as volatile as thought, speech, vision and imagination.

An additional continent of reading and seeing opens up before us, in the works of UBIK, Ayesha Jatoi, Joël Andrianomearisoa, Nicène Kossentini and Timothy HyunsooLee, bringing together a minimal aesthetic yet not prescribed by the structuralism and rigid formalism that begot these questions over the meaning of the sign at the turn from the modern to the contemporary. From a privileged position in time, at the edges of a dialogue both cultural and aesthetic, these artists have departed from personal topographies, often in more than one language or culture, addressing subjective characters and situations, in order to arrive at or to depict objective conditions that define our current relationship to art as a language based on texts and signs.

UBIK’s “Rant#” works, part of an ongoing series (2013-2015), pick up on the artist’s signature investigation of the relationship between forms of authority and memory within the contemporary object, and resort to the fragmented nature of language and sign that restrict those selfsame forms of authority and memory, exposing them as vulnerable and impermanent. Using the memorial plaque as a format, and offering a playful critique of cultural and historical authority, the artist is exploring the possibilities of natural language as a future form of knowledge, and questions whether language and language as art can survive the mass production of images as commodities, in lieu of knowledge and experience. Does language retain the same validity in anonymity and haphazardness?

“Gopis in Search of Krishna” (2013), inspired by a well-known story from the Bhagavata Purana, a sacred text of Hinduism, is one among the graphite drawings presented by Ayesha Jatoi, whose conceptual work takes cue from the division of space in the traditional miniaturist painting of Persia and India. Text acts in lieu of spatial bodies, and refers us to the architectural nature of thought and mental spaces. Conjuring up a number of oral and visual representations associated with the story, creates different mental spaces and images in different viewers. The retinal aspect of representation is broken and drawing is brought back to its most primary intention; an abstract mental activity based on lines and planes.

Turning to medieval Islamic philosophy, in “Shakl II” (2015), referring in Arabic to both movement and form, Nicène Kossentini treats the Arabic language as a closed semiotic system, emptying of its objective content and leaving us with markers and signs as reading signposts. In classical Arabic texts, only consonants were written as vowels and other sounds were learnt by heart, but were then later incorporated by scholars as diacritic marks to facilitate learning. Kossentini’s panels display only the diacritic marks of the texts and the letters remain nearly imperceptible, floating and motioning. Would it be possible to be read only based on marks and gestures? The signs might remain, but the meaning has been irreparably lost.

Moving on from his earlier more strictly autobiographical works, dealing with mental illness and immigration, Korean artist Timothy HyunsooLee, brings work from his 2014 series ‘Impressions’, where notions of authorship and personal memory become vague, and different selves are externalized in order to address the complex structures of our mental architectures. Abstract representations of the mind, turn into shapes of the unconscious and remove the artist from the solipsism of traumatic memory. Can however traumatic memory be abandoned at all? The permanent symbols of detachment and loss become superstructures of knowledge and codifiers of signs and symbols. How can language become abstract insofar as it remains mnemonic?

The series “Complex Horizons of Love” (2015), presented by Joël Andrianomearisoa, from a recent show at the gallery, and the fifth phase in his exhibition-wide engagement with the harsh realities of love and romantic disappointment, inspired by a close reading of Oscar Wilde’s ‘De Profundis’. In these horizons, as the viewer can experience them on close inspection, the artist reveals an open infinity of horizons on a black canvas, between brightness and density, reaching out for the intangible and the impossible. In this rupture of communication with the world brought about by the difficulties of love, language breaks down and signs become ineffective. “Sentimental Negotiations” (2015) with its opaque mirrors, depicts accurately the narrative impossibility of that breakdown.

As the sign begins to signify different things for the artists on show, it is no longer defined by geography or even by delimited subject matters. “Signs/Language” is a presentation attempting to survey the limits of human communication in a plurality of forms, offering perspectives on language not simply as a grammatical code but as a semiotic system, rich in thought forms applicable to every field of human representation of the world around us. Art has tested the boundaries of language over and over since times immemorial, in a quest to find expanded modes of consciousness that can better articulate the world of phenomena and experience, replete with changing signs, fragmented words and volatile ideas.