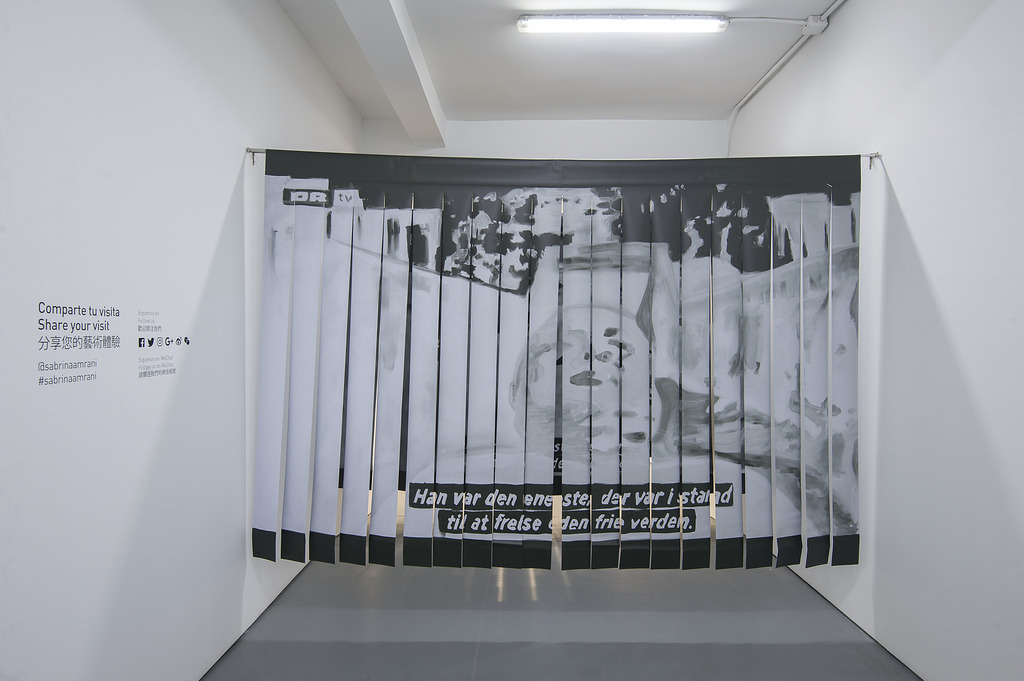 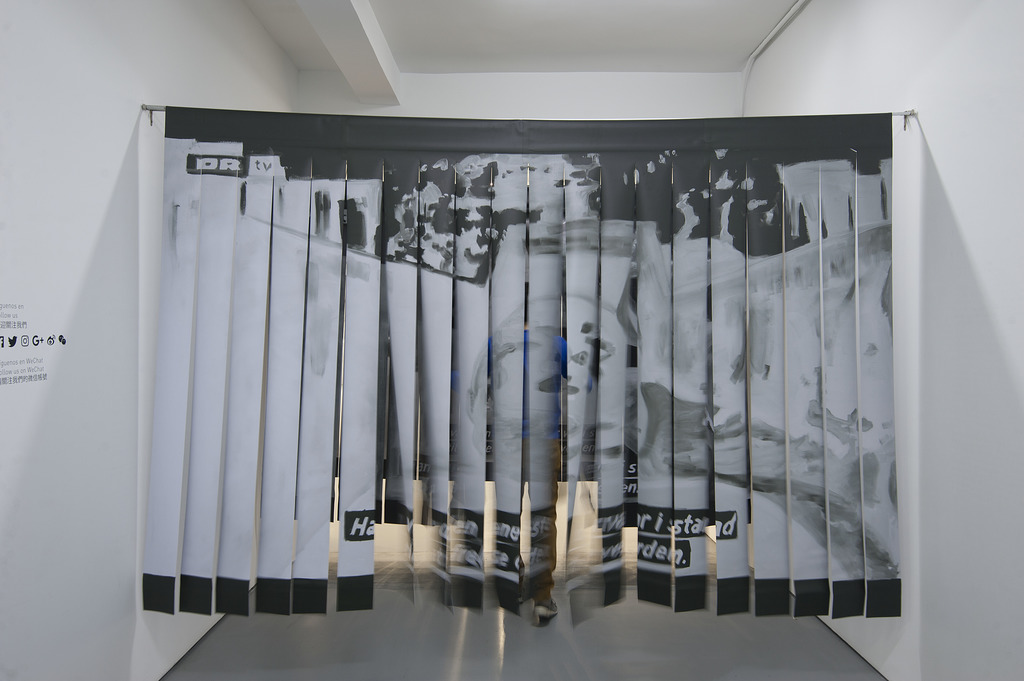 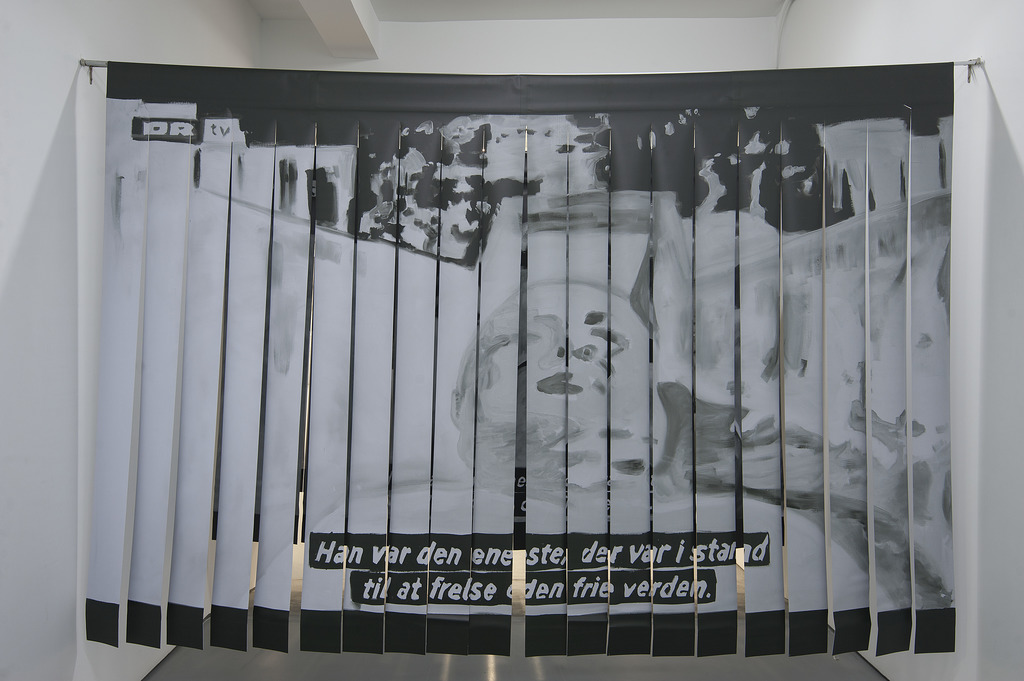 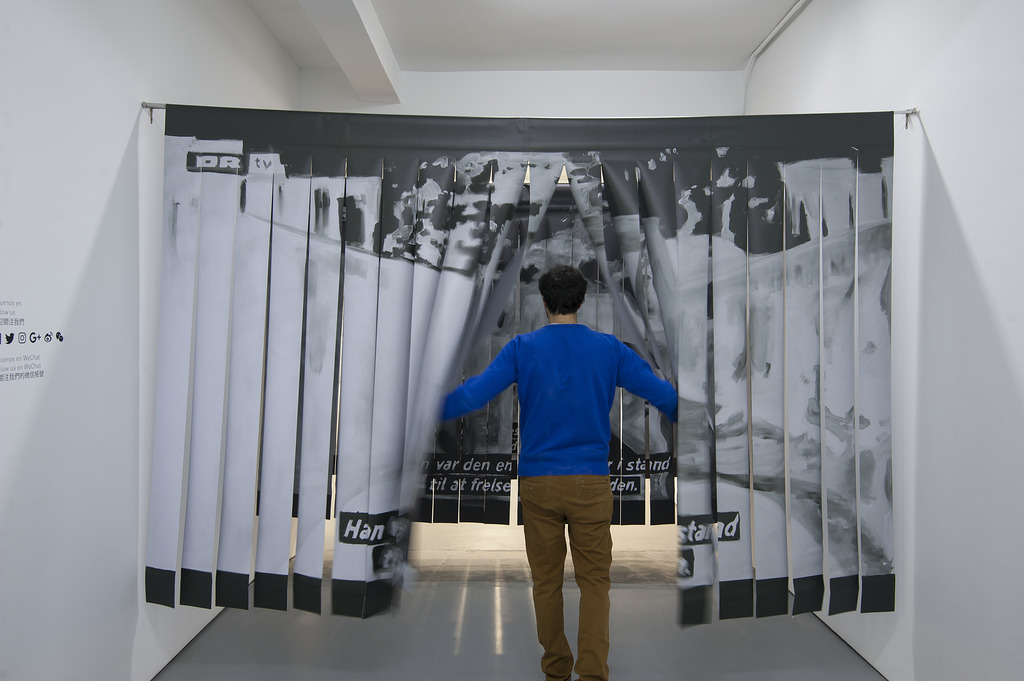 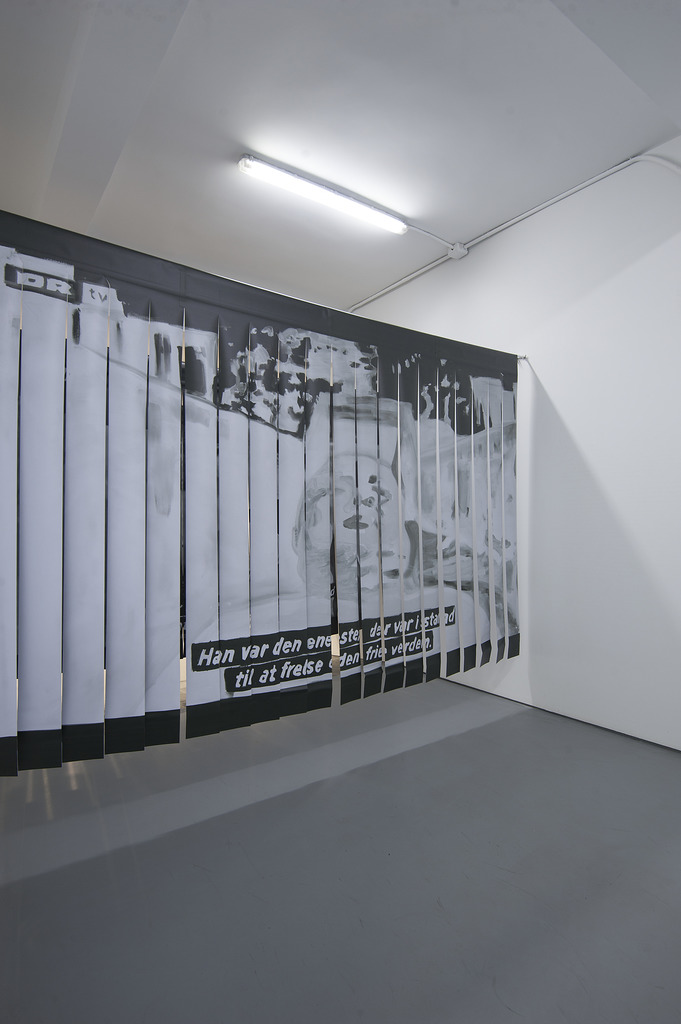 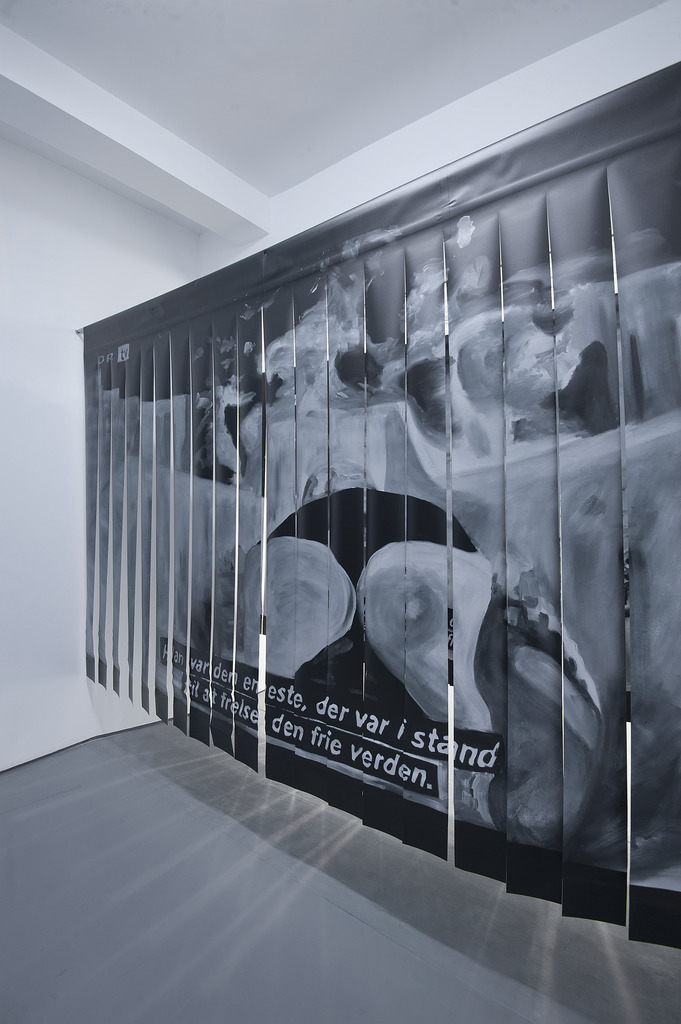 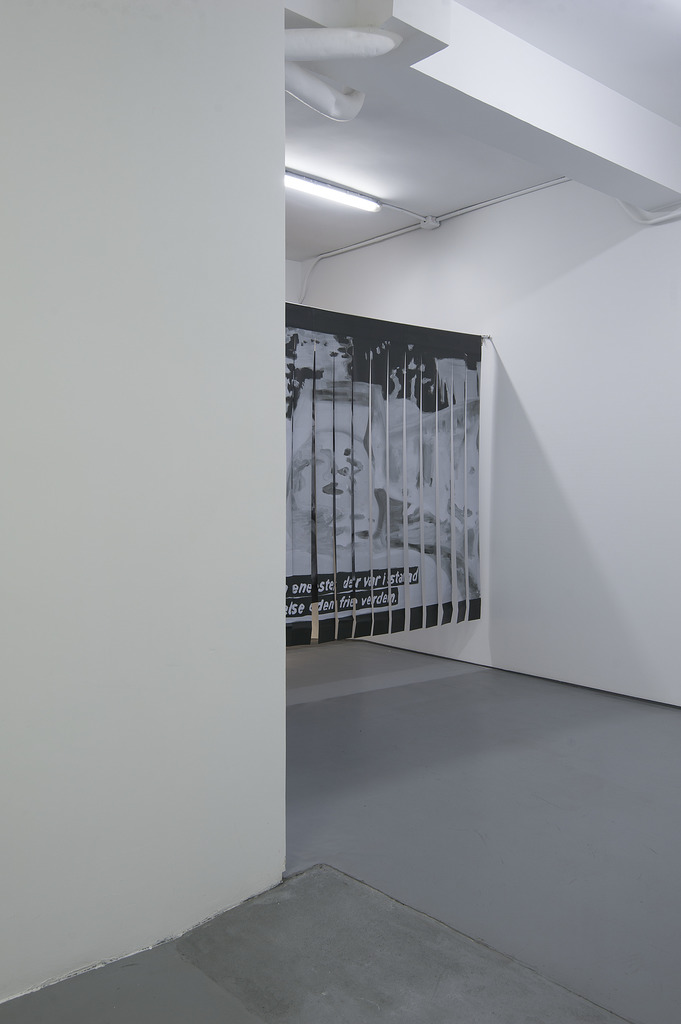 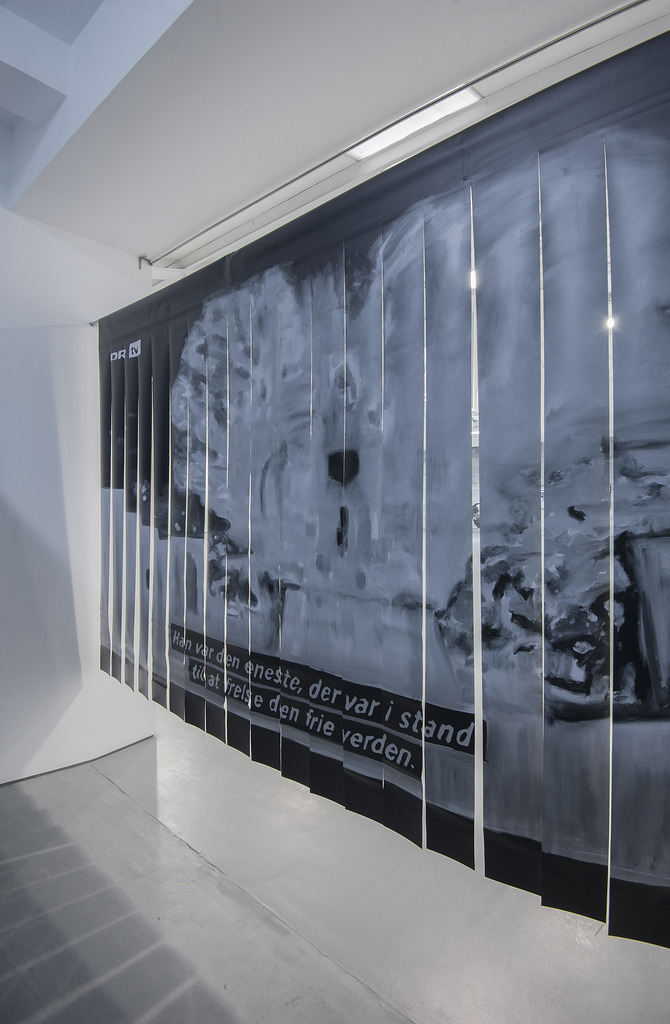 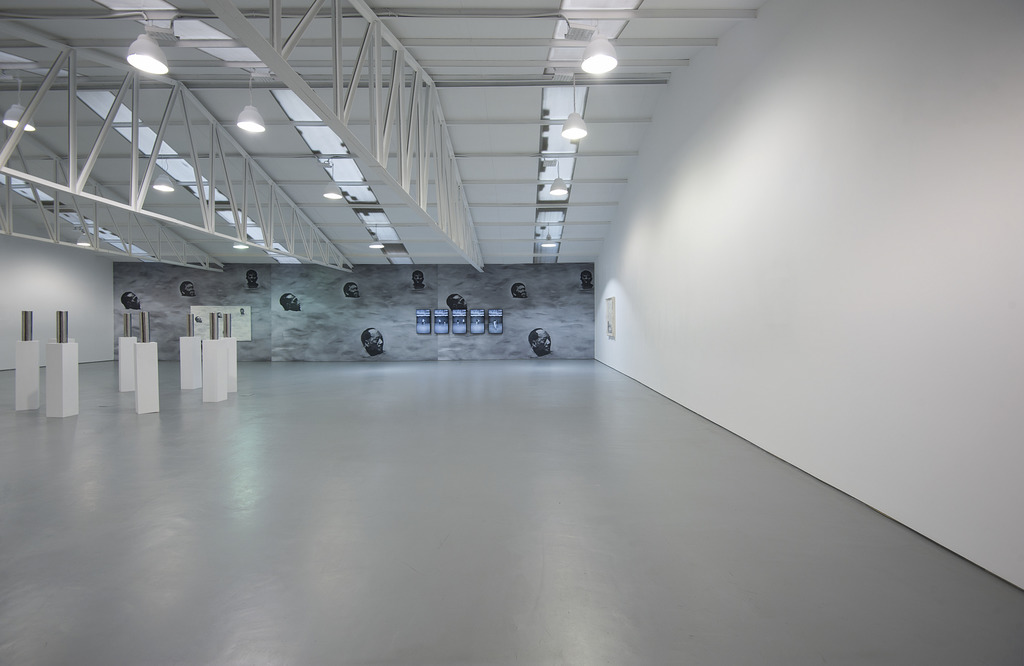 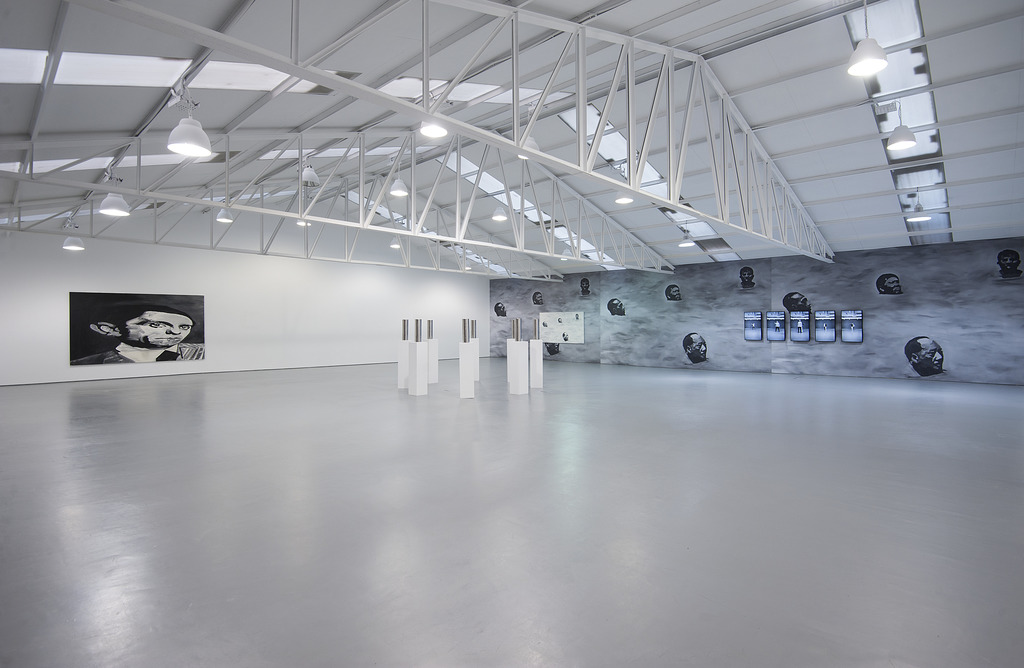 Sabrina Amrani is pleased to present The Longer You Can Look Back, The Farther You Can Look Forward, an exhibition by Babak Golkar that explores the complex ideas of contemporary manipulation.

After three years of researching historical and contemporary theories and practices of propaganda and the impact of images in our daily lives, Babak Golkar analyzes the role of social networks, Internet markets and the consequent image culture in which we are not just involved, but deeply immersed and implicated. In the exhibition, the artist plays with the idea of being constantly manipulated through our limited perception, for which image is a powerful tool. Golkar examines a variety of cultural registers—from Bertolt Brecht’s early works in the 1920s to Joseph Goebbels’ use of propaganda, from the Law of Prägnanz to the influence of Steve Bannon’s doctrine and the Tea Party on Trump’s administration—as he focuses on a necessary distrust of the retinal sphere. The Longer You Can Look Back, The Farther You Can Look Forward, with a fresh and playful point of view, explores the complex ideas of contemporary manipulation.

The exhibition opens with If You Are Going Through Hell, Keep Going. Churchill (2017–2019), a set of three vinyl prints, printed off of three large-scale paintings that Golkar had made based on three stills of a documentary film depicting Winston Churchill going down a waterslide—head first, face up.

Painted in a style reminiscent of a theatre background, Mann Ist Mann (2017–2019) is a large-scale lead-based oil painting of a photograph taken in 1899 of Nikolai II, Tsar of Russia, pretending to fly on the back of his friend and cousin Prince Nicholas of Greece. While the two powerful men are captured in the photo being playful, the image is used by Golkar at a subterranean level as a trope, referencing another powerful and politically playful duo: Vladimir Putin and Vladislav Surkov, two major players in the modern propaganda system, with connections to Brecht’s Epic Theatre.

The show continues with a five-channel video installation titled Rehearsal (2019) is a recording of a five-act rehearsal with two contemporary dancers. This work is an interpretation of a piece of music that Bertolt Brecht wrote for an early play, also titled Mann ist Mann, which he presented in Berlin between 1924 and 1926. The play humorously investigates themes of war, human fungibility, identity lost in brainwashing and propaganda.

In the summer of 1966, Chairman Mao, grappling with controversy and criticism for having lost his control and widespread power, took a dip (with his bodyguards) in the Yangtze River to show the world that he was still in robust health as well as relatable to the average person. It was a propaganda coup—the first of its kind—and a tactic that many politicians have repeated since (Putin captured in a photograph exercising Karate in a kimono is one example). The image of Mao swimming was circulated worldwide, courtesy of the BBC, which reported the event from their station in China. The BBC image is the source for Golkar’s painting Drifters (2018). In the exhibition, the image of the painting has been transformed into a scaled–up collaged and tiled wallpaper that covers an entire wall of the gallery.

Further focusing on the impact of decontextualized reality produced by images, Golkar presents Amusement Park, 1924 (2018). From a distance, this piece is a faint, almost washed-out, Impressionist-looking painting that depicts a merry-go-round in an amusement park, and the frame innocently resembles an ornate French frame. However, on a closer look the true subject comes to light: the seats of the merry-go-round are filled with hooded figures belonging to the KKK, and the camera also catches some embers lying on the ground. The painting is based on a 1924 photograph taken by Clinton Rolfe of a KKK amusement park in Colorado. As a complement to the painting, the ornate handmade frame mimics the French colonial style, with a subtle modification: a miniature noose is added to either side of the frame.

As closure of the exhibition, addressing propaganda and its direct historical relation to psychoanalysis, Golkar presents Sellers (2017), an installation composed of a large-scale painting and a looped sound piece. Both pieces trace the connections between propaganda and marketing, through the works of the American propagandist and public relations mogul Edward Bernays (Sigmund Freud’s nephew) and the Minister of Propaganda of the Third Reich, Joseph Goebbels. The accompanying sound clip is of Thea Rasche, a German pilot who became an instant celebrity in the 1920s after flying from Berlin to New York. Hired by Bernays to advertise short skirts for young girls, Rasche speaks in the sound clip about “the psychology of dress” and how girls should “express” themselves through their choice of clothes. Similarly disorienting, Goebbels’ portrait is painted anamorphically so as to produce a different effect depending on where it is viewed from different physical points in the space.

At random moments during the exhibition, the gallery space will be filled with a very dense fog, further disorienting visitors and changing their experience and perception of the works and the exhibition itself.

In Matteo Lucchetti’s words, “The artist’s works developed as part of the exhibition represent a visualization of his distrust of the retinal sphere. It is a journey that dissects the circularity of history, in the reappearance of fascism via the simplification and forgery of facts from the political sphere to the masses.”

The Longer You Can Look Back, The Farther You Can Look Forward is the final chapter of a three-site staged exhibition in 2019 and 2020, with a first act titled All The Blind Men exhibited at the Servais Family Collection in Brussels in March 2019, and a second act titled The Elephant (an intermission) at Sabrina Amrani Gallery (Madera) in September 2019.