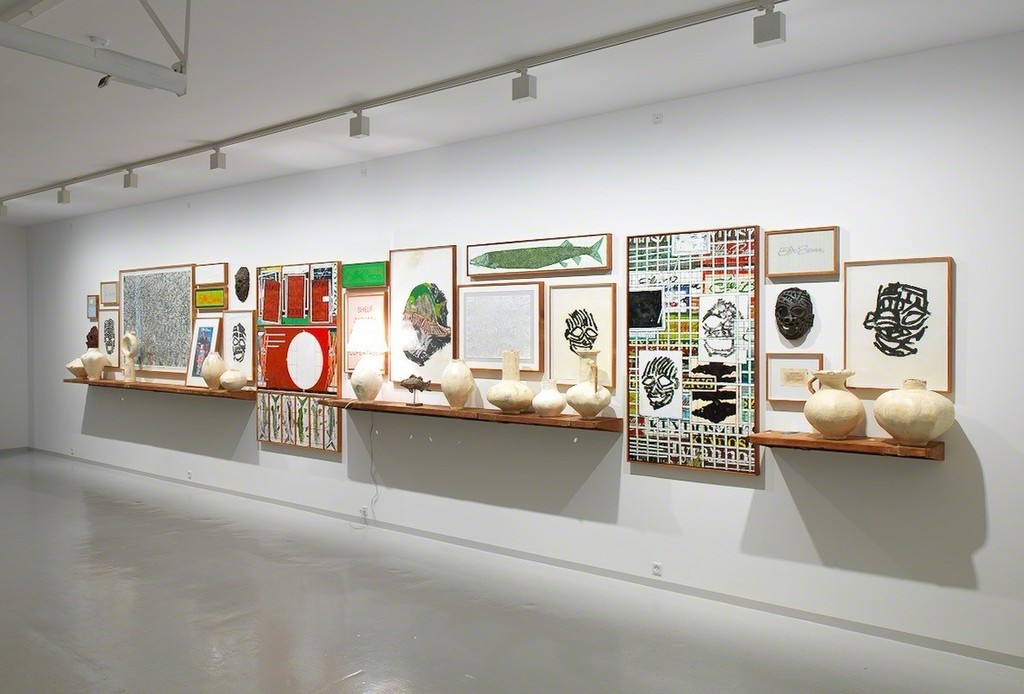 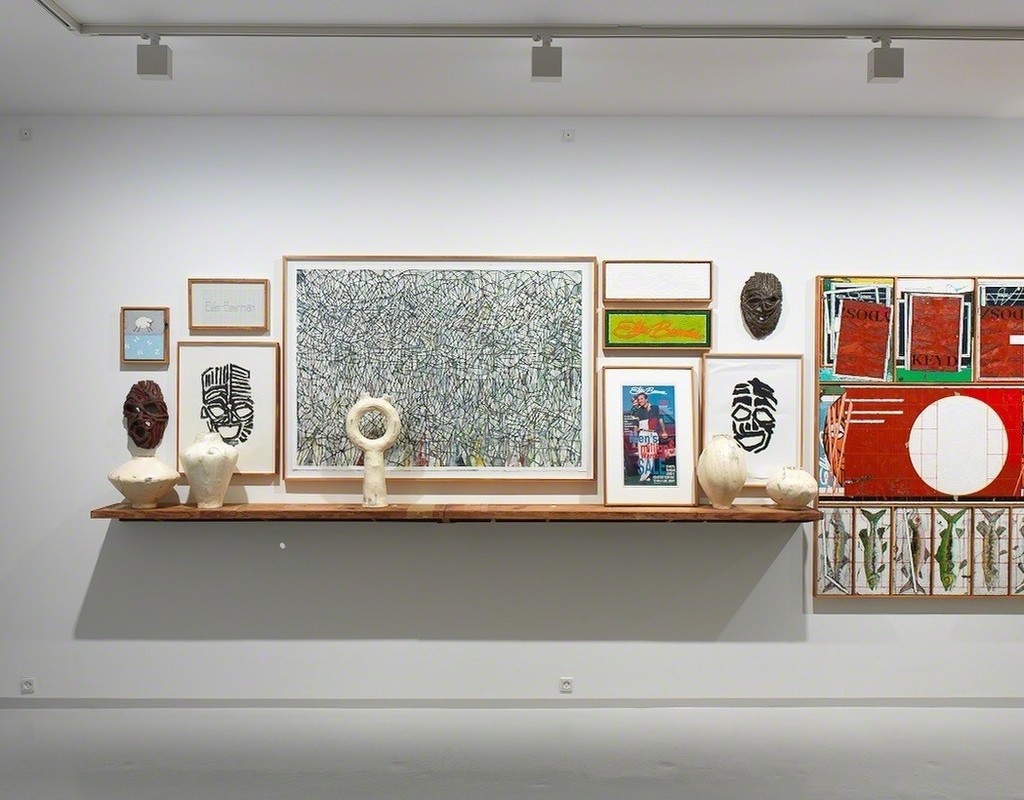 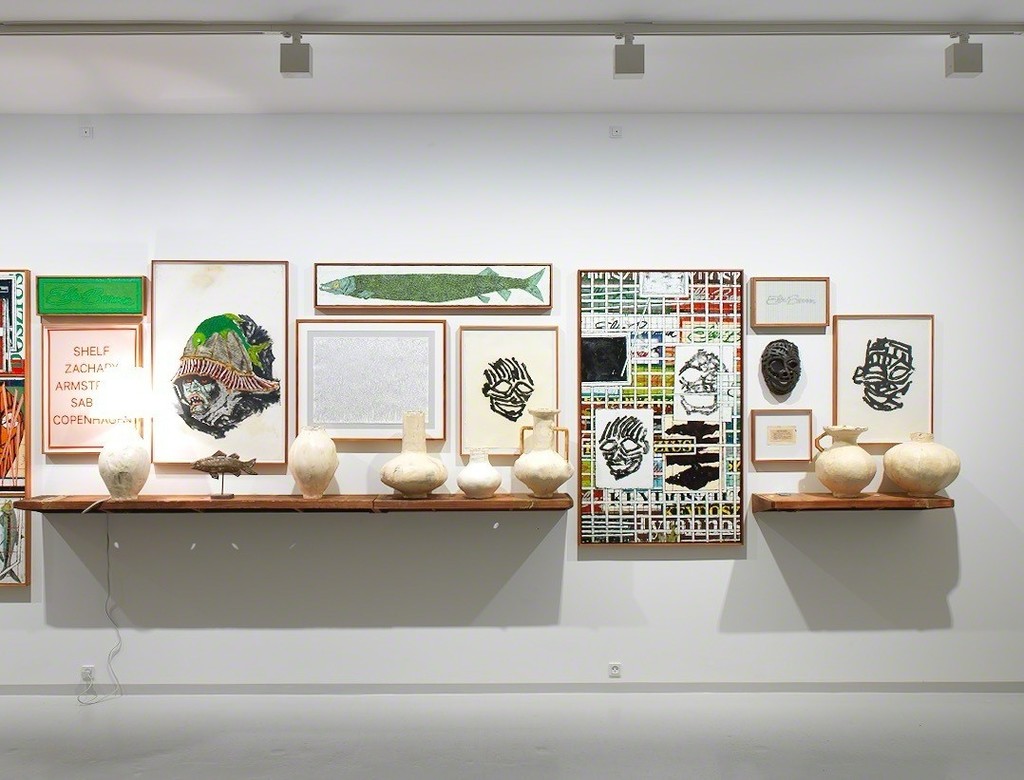 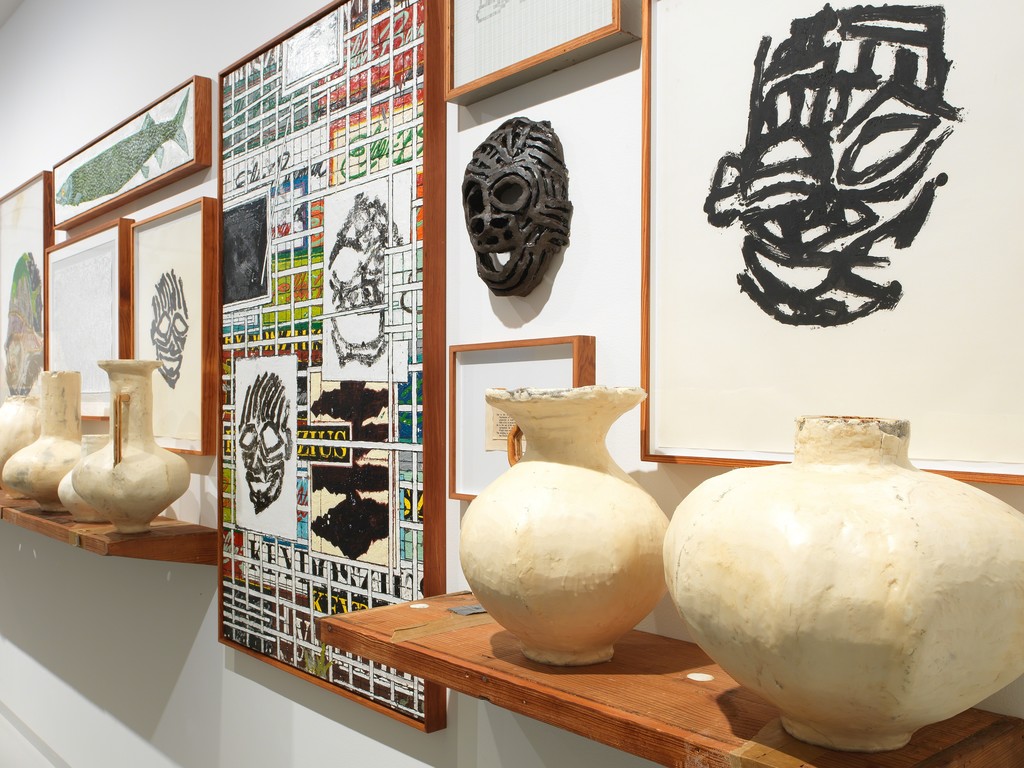 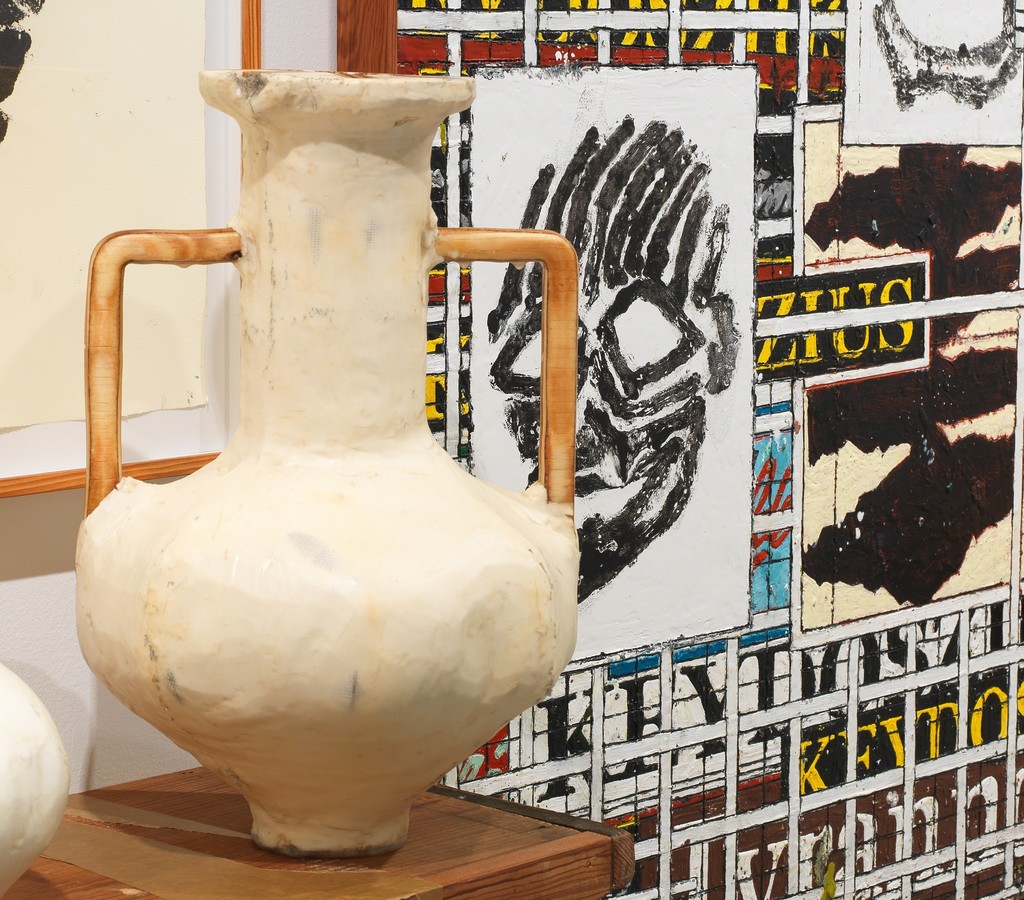 Sabsay is thrilled to announce the opening of ‘Copenhagen’ by Ohio-based artist, Zachary Armstrong, a solo exhibition featuring collage, pottery, ceramic masks, and paintings of faces and fish. The show has been long awaited and demonstrates the wide range of media in Armstrong’s practice.

Armstrong is known for spending very long sessions in his studio, building all of his canvases and stretchers himself, and his hands-on approach to imagery can be considered rather unique in contemporary artistic practice. Acquiring the spontaneity and simple aesthetic of a child or even the late Jean Dubuffet, the encaustic and oil covered surfaces of his canvases are thick and clotted. The works on show express the artist’s method of energetically repeating the same figures into an entire vocabulary of images, making up a naïve cartoonish universe. “I consider all of my works studies in the sense that one work always leads to the next. For instance, the fish motive came out of a series of faces I was making. When one works with the same images for a long time, the change seems to happen in the process. I was exhausted by the faces and was carried away with fish,” the artist says.

This devoted and process oriented approach is articulated through the intimate space, which Armstrong has built at Sabsay, where a wide selection of his work is installed on a shelf. The shelf attaches significance to each object placed on it, each carefully selected and arranged side by side, reflecting the ongoing narrative of Armstrong’s practice. ”I have been building shows for years and years and wanted to do this particular show for a while. The shelf is like a pedestal, which rises things and memories above the mundane. It displays a compilation of all works I have done up until now and ties them together to tell a story,” says Armstrong.
Armstrong is a rare bird in gallery shows and art fairs, and the exhibition at Sabsay has been in the pipeline for quite some time. “Zachary is a talented artist, who is backed by some of the most outstanding art world players in the emerging segment. It is a privilege to finally present his works to a Danish audience for the first time,” says Masha Faurschou, Founder of Sabsay.

About the artist:
Zachary Armstrong (b. 1984) lives and works in Dayton, Ohio. He works in painting, but also in painted sculpture and other media. Through his works, Armstrong explores a childhood creative Elysium, using children’s drawings, both of his own making, and of his friends as the base for his large- scale encaustic works. Armstrong’s choice of encaustic as the dominant medium also owes a debt to his subject-matter, choosing the imprecise, fuzzy impression of lines fused via layers of wax, melted together over the hard outlines of oil or acrylic paint.

About Sabsay:
Sabsay is a contemporary art space in central Copenhagen, which opened in May 2016. With a focus on high quality art, it is a place where emerging artists and new artistic practices from around the globe join in a dialogue with the established ones.