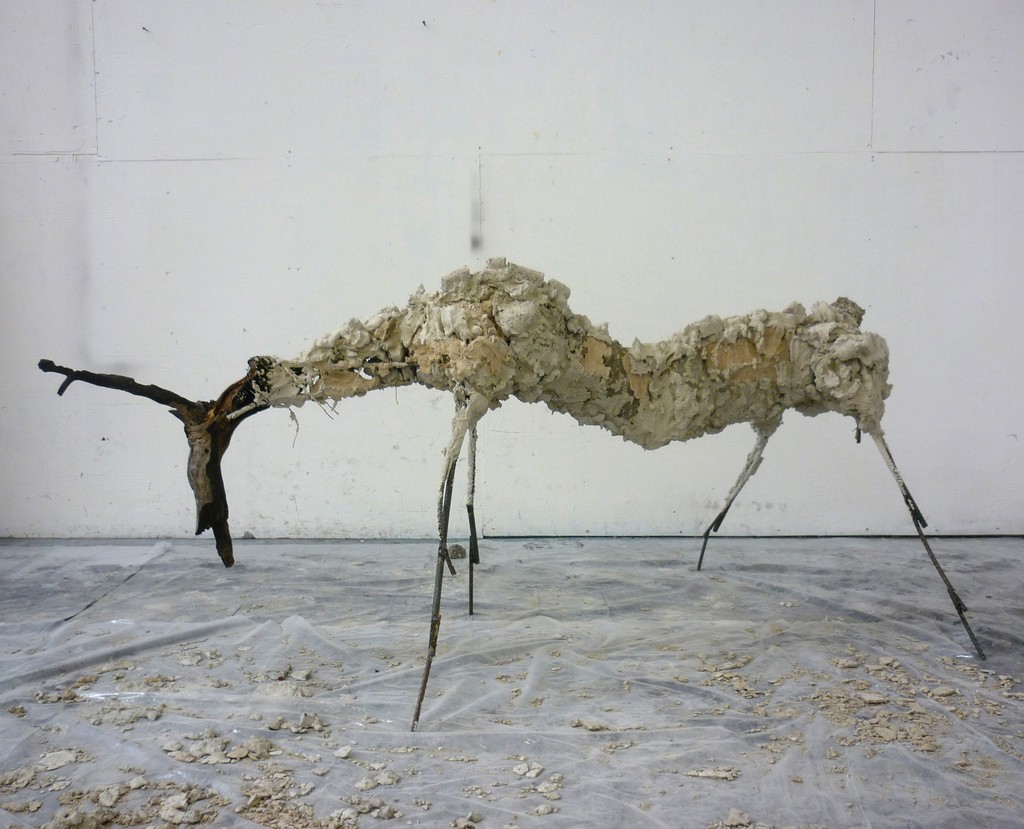 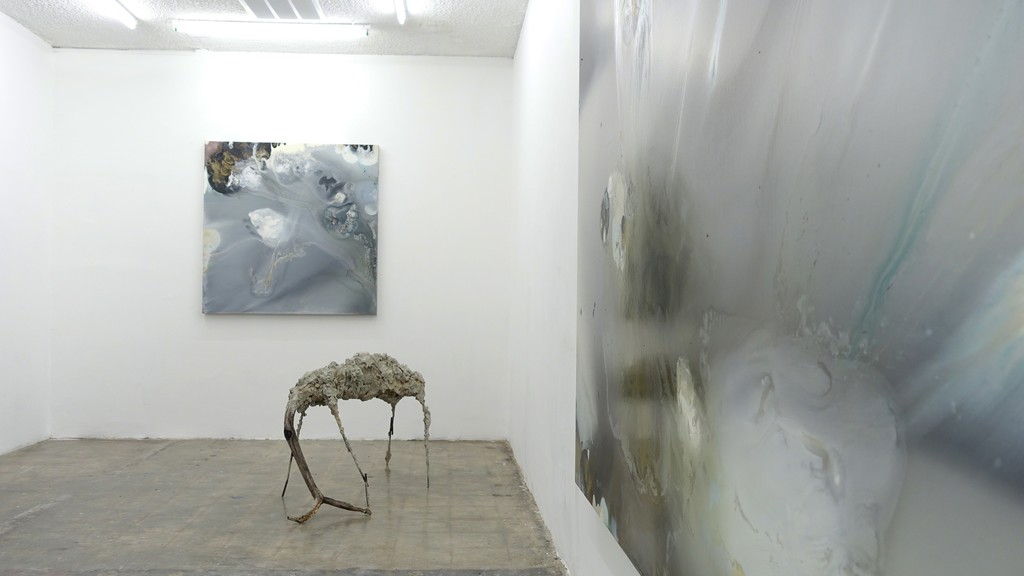 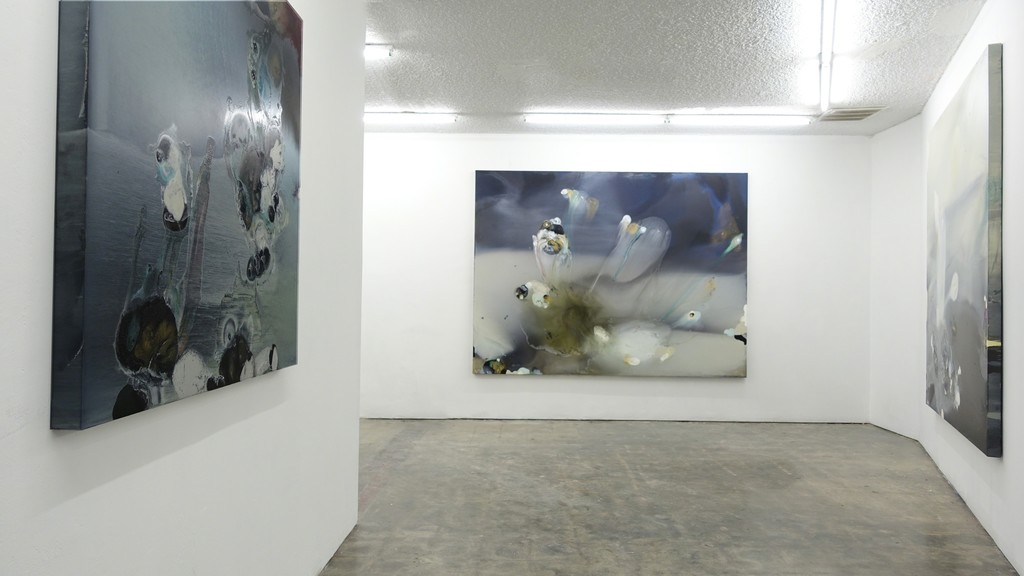 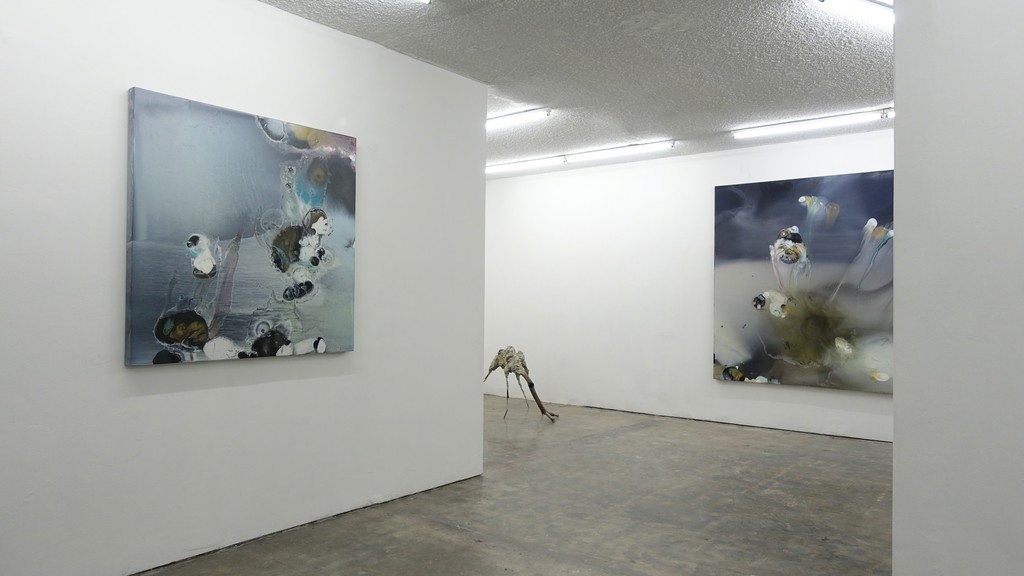 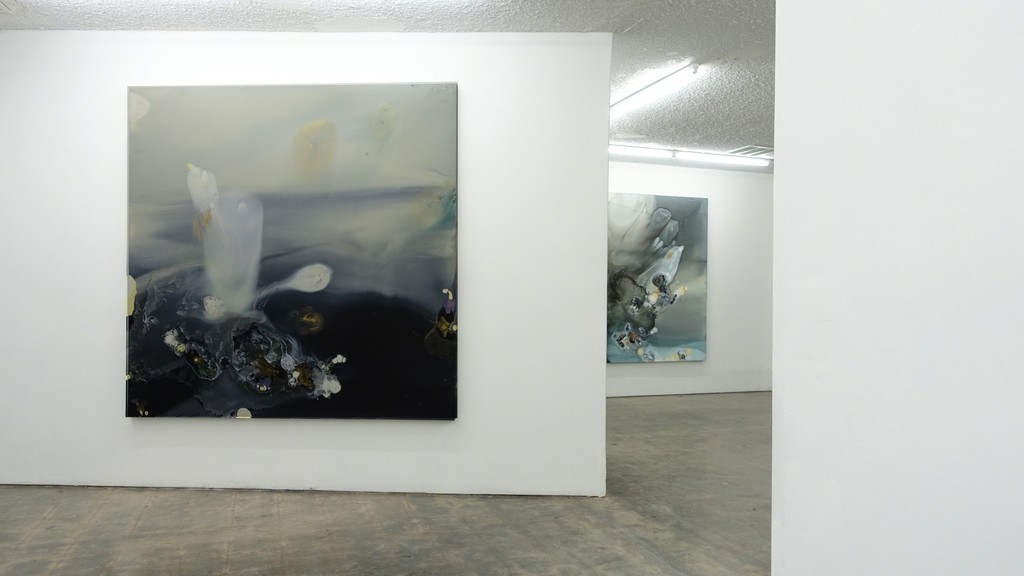 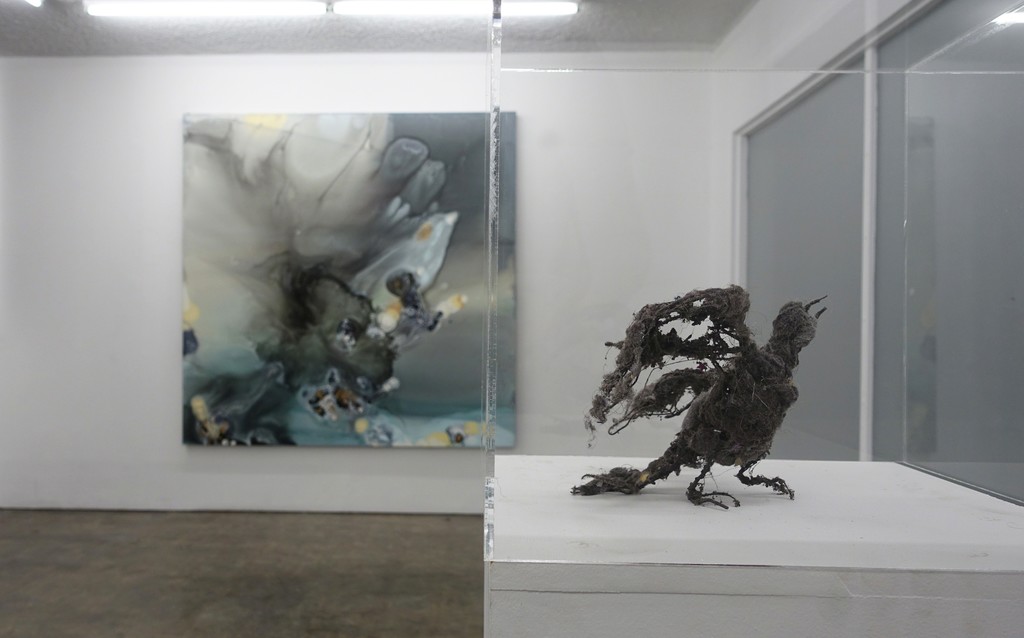 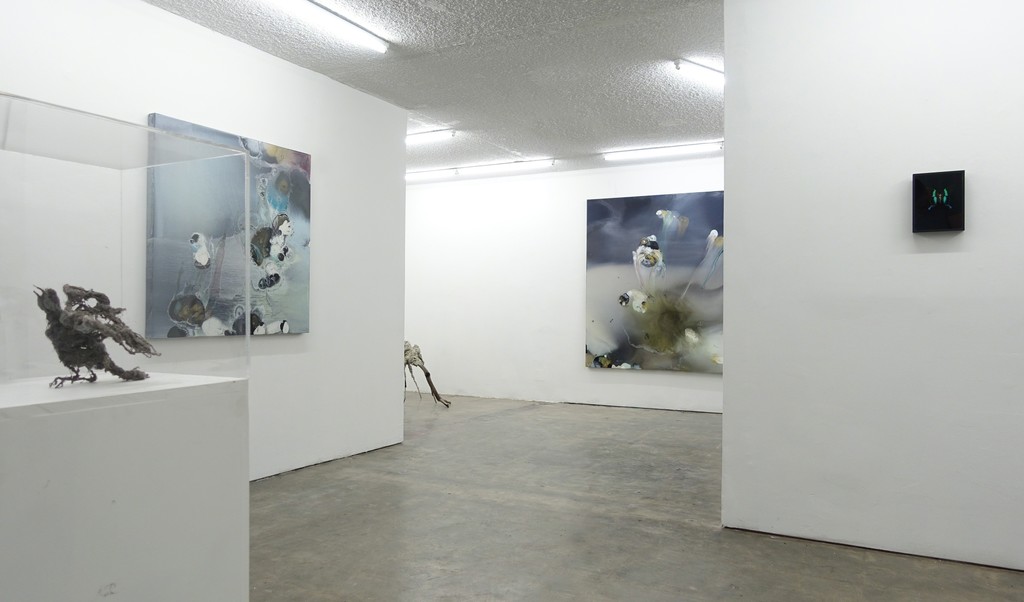 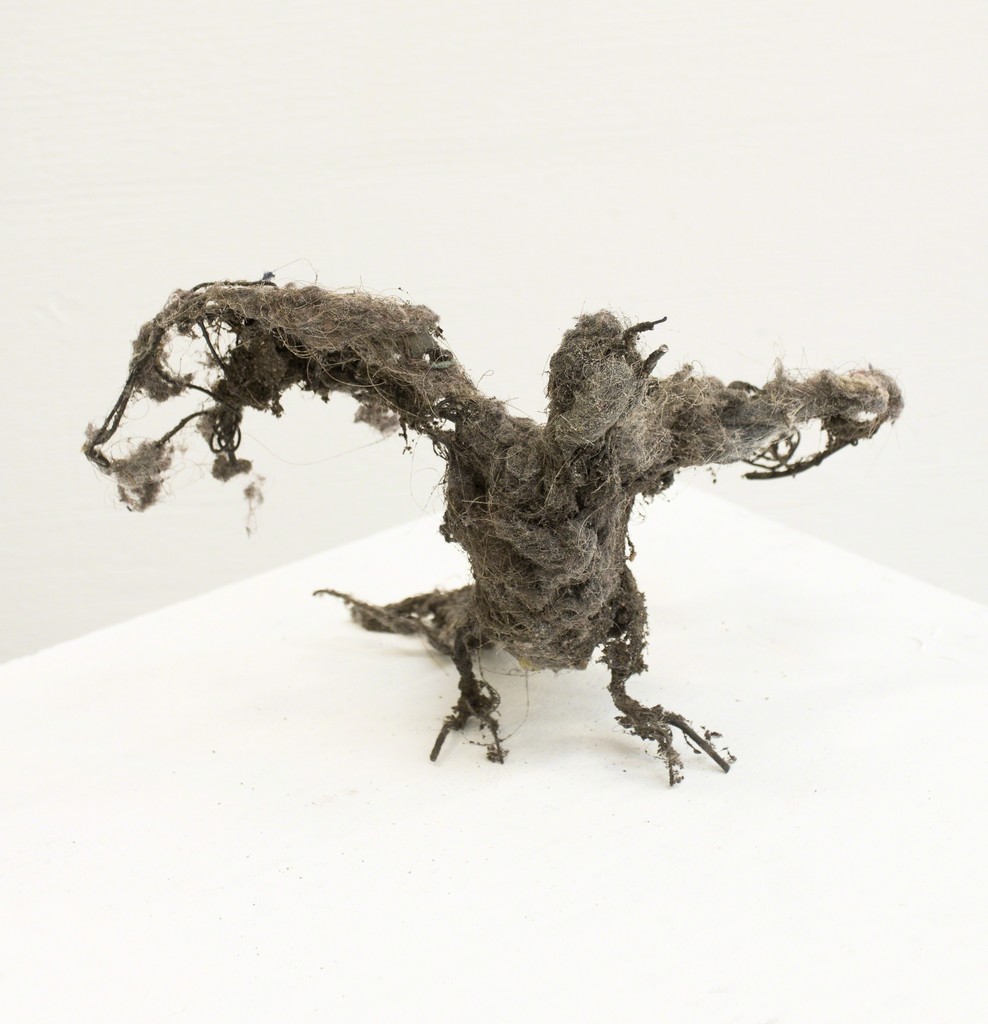 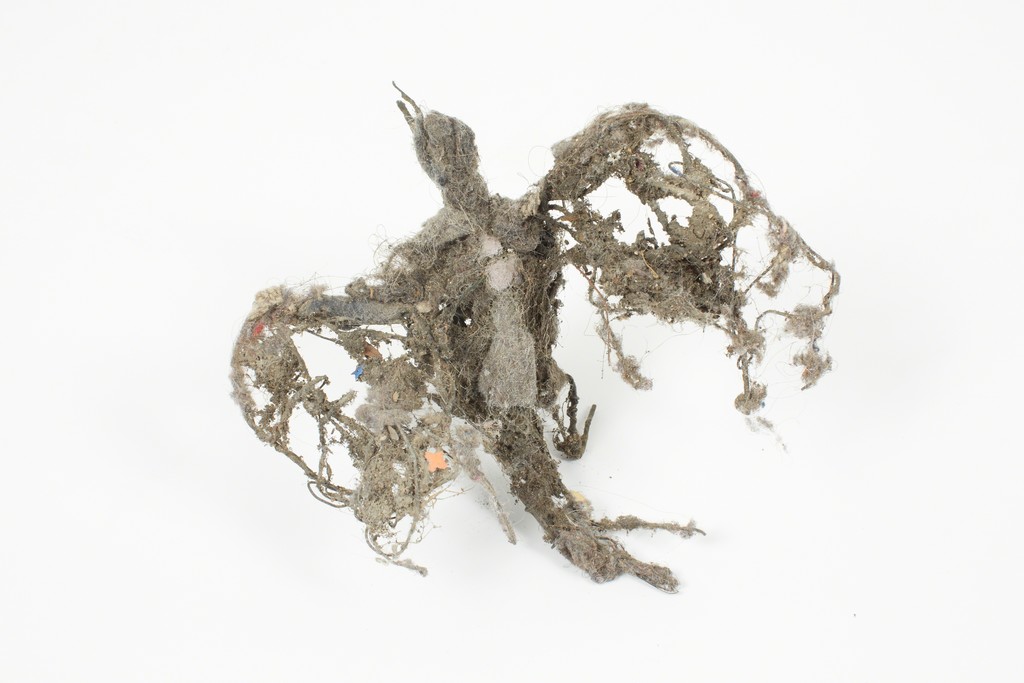 Painted during the season of june gloom, where the darkening of coastal skies lends itself to hazy mornings, Lionel Sabatté’s large scale non-representational painting are characterized by their striking depths, vivid textures, and spatial intensity. He deftly uses pattern, color and material relationships to challenge the pictorial space of painting's modes of perception.

Each painting, while belonging to the same universe of difference, remain independent of each other. As do the small scale paintings and sculptures of animals flanking the gallery space, where the slightest irregularities bestow each individual character. Birds formed using bronze and iron ore pigment are set with an oxidizing primer, which casts a blue pale against the overripe oxidation set into creamy white paper. The addition of painted eyes affixes a steady gaze, imparting life as easily as the degeneration process used.

Life is defined through biological terms: it must be born, die, and reproduce, existing somewhere between the boundaries of mineral and organic. The lives depicted here are twin solutions to desire and desperation, an immersion towards empathy; the human race, handled with care. While an homage to a moment to longer present, Sabatté’s forms supersede memory and come into their own. Bodily pieces left behind, without worth or weight, are given back form. Sabatté’s process of gathering dust - a term sanitized from its source of human debris and waste - to sculpt animals is at odds with the resulting effortless clouds of grey suspended around metal armatures. So much trouble over bare skin.

Therein lies within these constructed realties exists a non hierarchal flattening, where neither animal nor landscape is depicted realistically but rather as a shift, or transference of natural imagery. The worlds formed around and subsequently inhabited by these hybrid creatures shouldn’t work. Though it is through Sabatté’s exploration of material-based abstraction, perceptual psychology, and inversions of surface that form the basis of phantasmagoric landscapes and nearly immaterial sculptural works to great effect. In the depictions of universes far away that reveal little at first glance, we are left to tease out forms within unknown spaces, transfixed. This new body of work contends itself with the imbrication of patterns and experience that structures ones vision, suspended in doubt, cured in paint, forming worlds between the boundaries of affect and reality.

Having always been here & having just arrived,

a single phase interference to be weirded outward,

the membrane between the past and the present, thinning