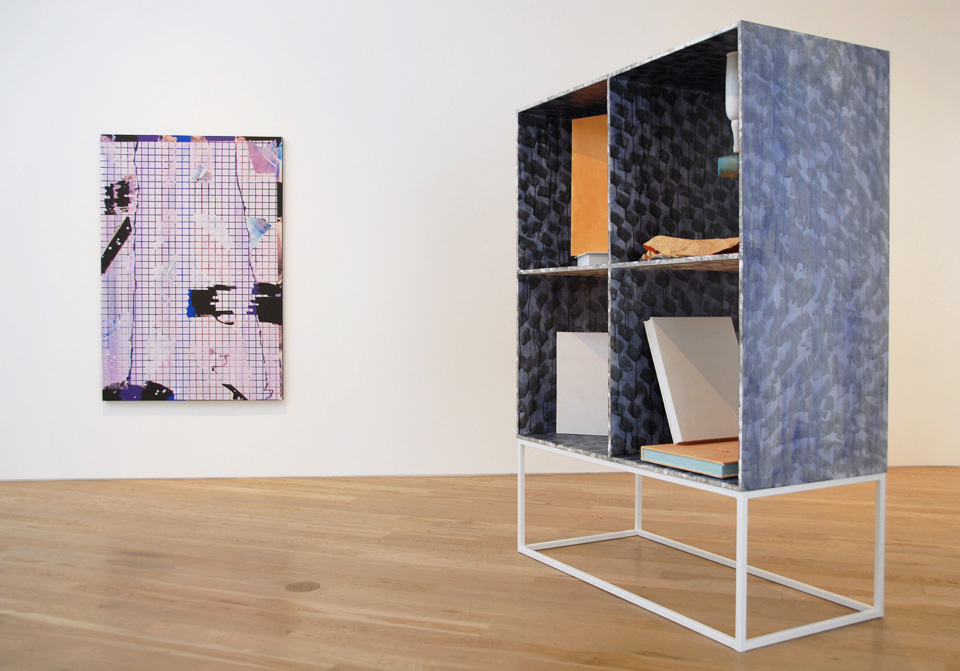 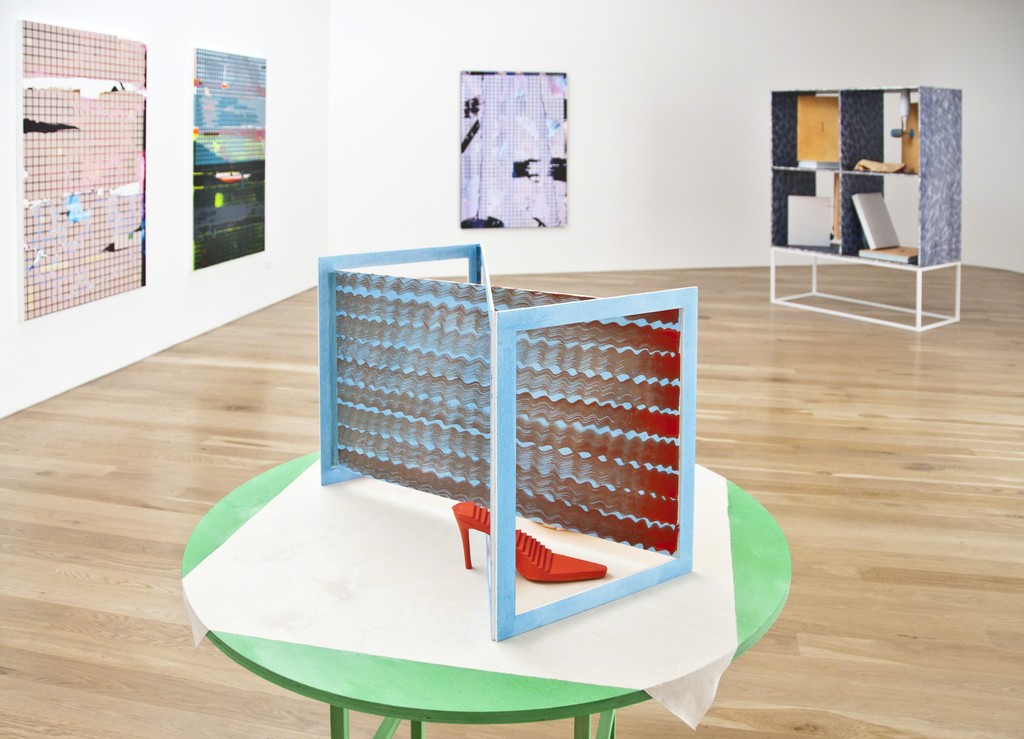 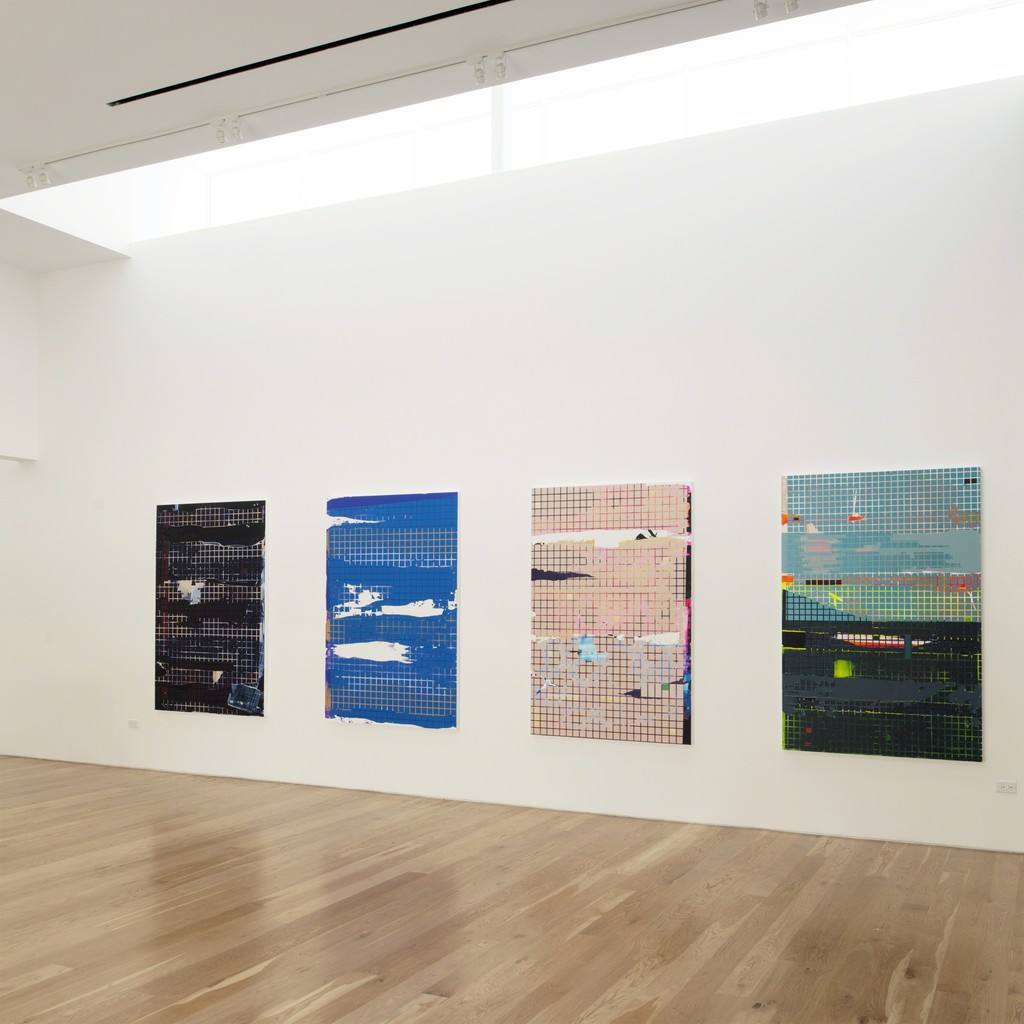 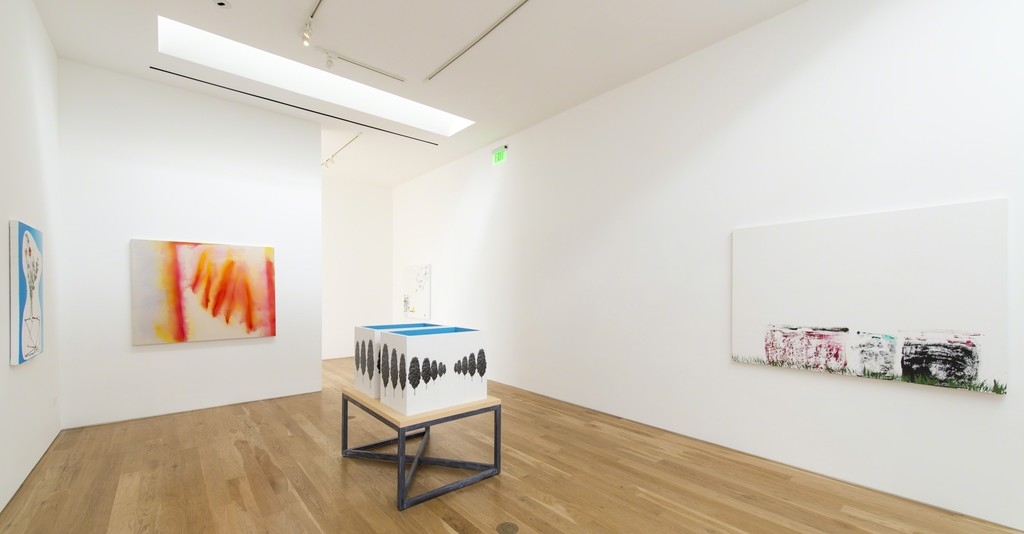 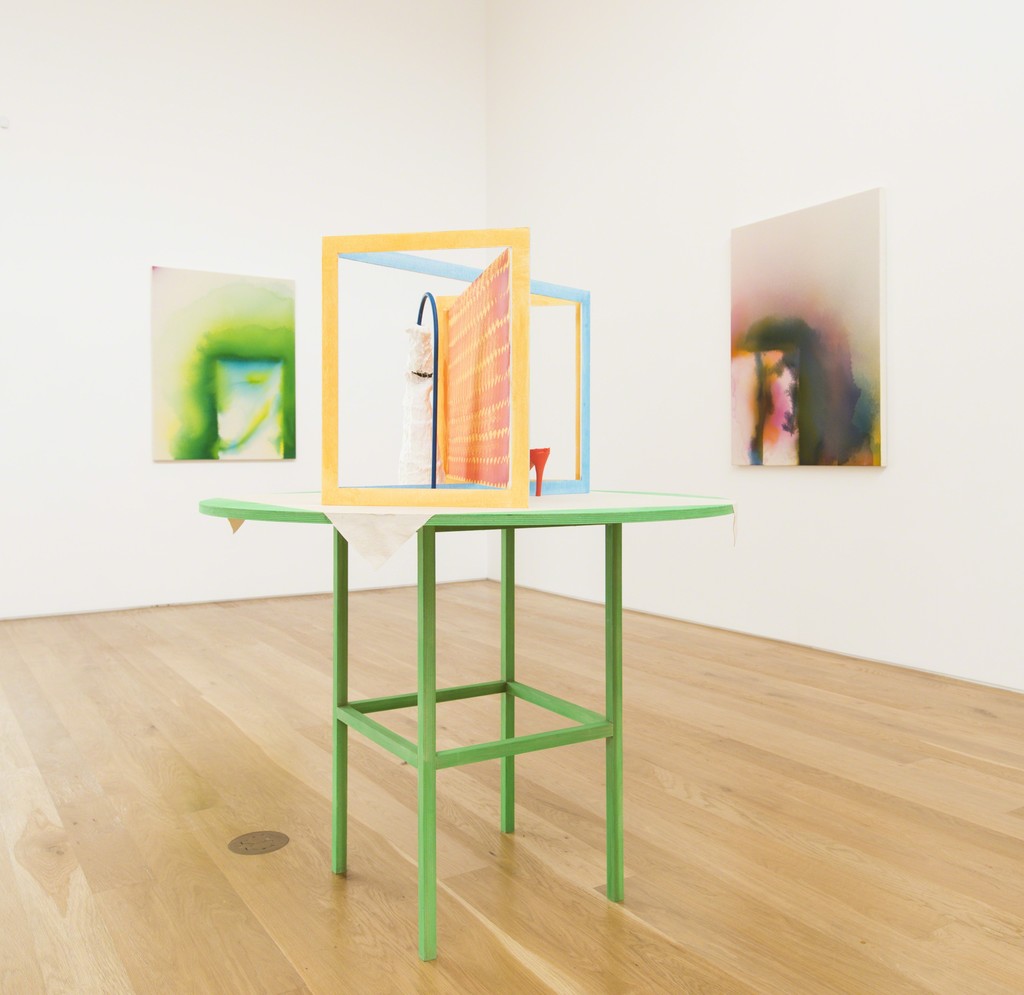 Steven Bankhead embraces an archaeological approach to explore pop-cultural and art-historical milestones. In the two series of paintings jointly presented here, Bankhead draws from opposing moments in the history of painting: the 19th century picnic, exemplified at its climax by Seurat or Manet; and Lucio Fontana’s dismissal of the easel painting through his violent ruptures to the canvas. Both new series by Bankhead use rudimentary printing implements in support of these conceptual underpinnings: in his Picnic paintings, objects and natural materials – including Igloo coolers, tree bark and a pig’s head – are paint-stamped onto clean white ground to figuratively re-present themselves. In the Bleeds, punctured and slit Fontana-like canvases are essentially turned into stencils for the aerographic dispersion of brightly hued, bleeding paint. As a result, two disparate moments in art history are tied together with a new aesthetic resonance.

Britton Tolliver’s suite of large-scale paintings is a complex, playfully abstract conversation between foreground, background, intentionality, and chance. Using a self-imposed set of rules, Tolliver serially moves between gestural painting and the superimposed grid, a mediation that enables both aesthetic choice and obliteration of the image, and opens the pictorial space to dynamic – while disorienting – new layers. At the intersection of these layers is a simple poetic meditation on color and the passing of time.

Torbjörn Vejvi creates sculptures that explore subtle existential relationships between form and memory, introspection, and everyday life. With both coyness and sincerity, Vejvi’s exuberant abstract constructions combine formal references from the history of modern art with the psychological and social tensions inherent in 3-dimensional space. In his pointedly handmade painted sculptures installed throughout this exhibition, Vejvi turns a bookshelf, a pair of open-faced boxes and a tabletop surface into playfully mysterious tableaux, where cigarette-encrusted books, tea sets made from paper, and silhouettes of tree-lined promenades become entry points to a daydream space of subtly shifting dimensions.

Britton Tolliver (b.1976, Kingsport, Tenn.) has presented his paintings in numerous group exhibitions including The Golden Ass, Annie Wharton Los Angeles (2011); Chain Letter, Shoshana Wayne Gallery (2011); and Baker’s Dozen, Torrance Art Museum (2011). Solo exhibitions include Fixed Illusion at Golden in Chicago (2010) and The Search for the Sky Underneath the Dirt at Kinkead Contemporary in Los Angeles (2010). His work can also be seen in Painting in Place, the current exhibition at LAND, Los Angeles curated by Shamim Momin. Tolliver holds an MFA from Cranbrook Academy of Art and BFA from East Tennessee State University. He lives and works in Cypress Park, Los Angeles.

Torbjörn Vejvi (b.1972, Växjö, Sweden) has exhibited widely both locally and internationally. Select solo exhibitions include The object without is the object within, Glendale Community College Art Gallery, Glendale, CA (2013); Matter Matter Physically Dead, Raucci/Santamaria Gallery, Naples, Italy (2011); and Present/Future, Artissima 15, Turin, Italy (2008). He has participated in numerous group exhibitions including at Las Cienegas Projects, Cherry and Martin, China Art Objects, and Anna Helwing Gallery in Los Angeles; and Leo Koenig, Inc. in New York. Vejvi holds an MFA from the Malmö Academy of Fine Arts, Malmö, Sweden (of which two years were spent at UCLA). He lives and works in Highland Park, Los Angeles.