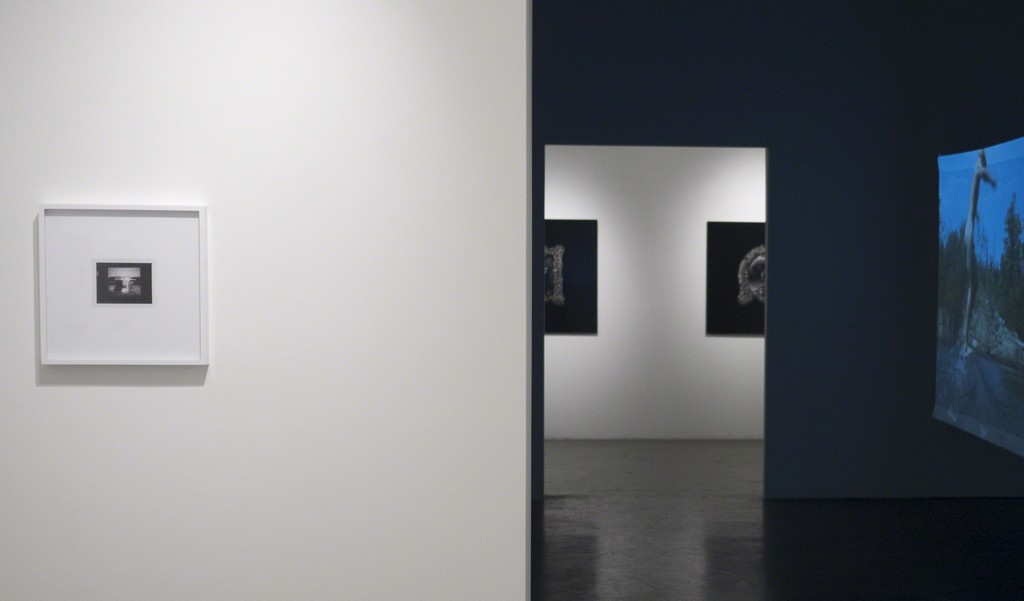 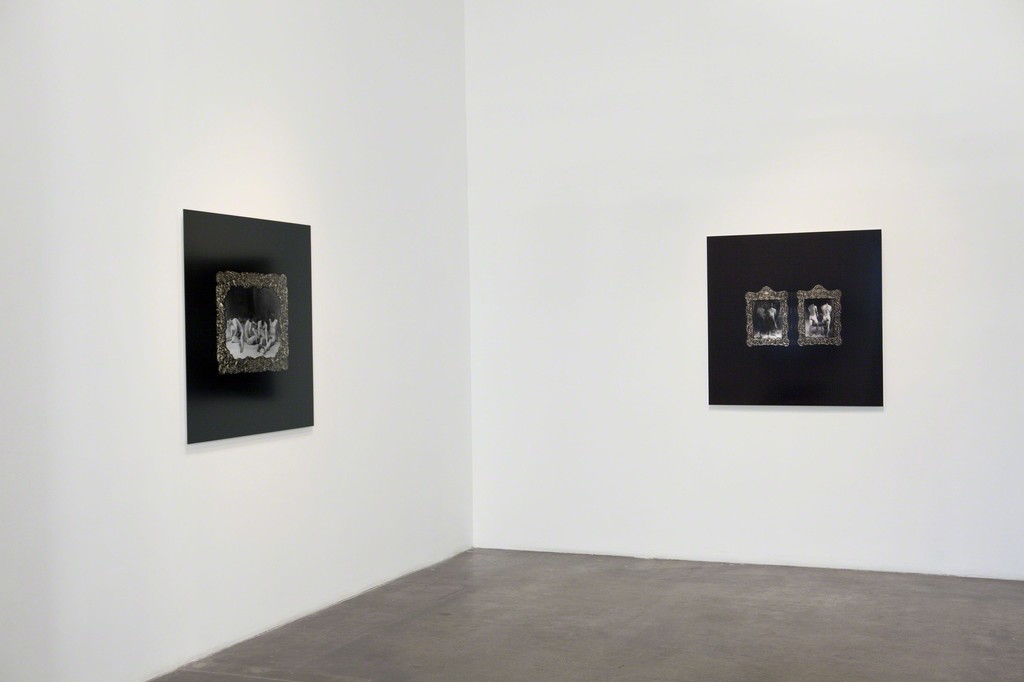 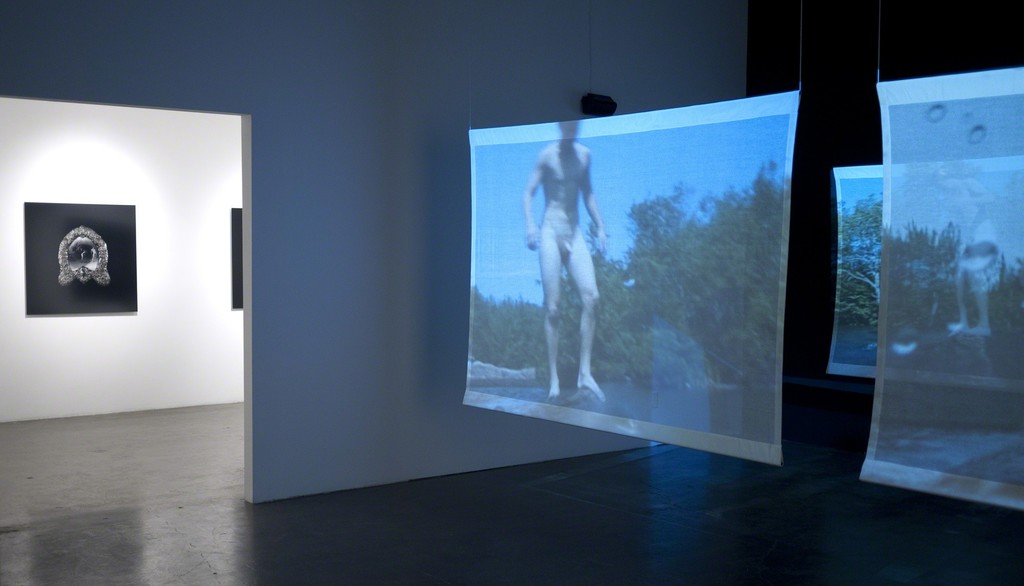 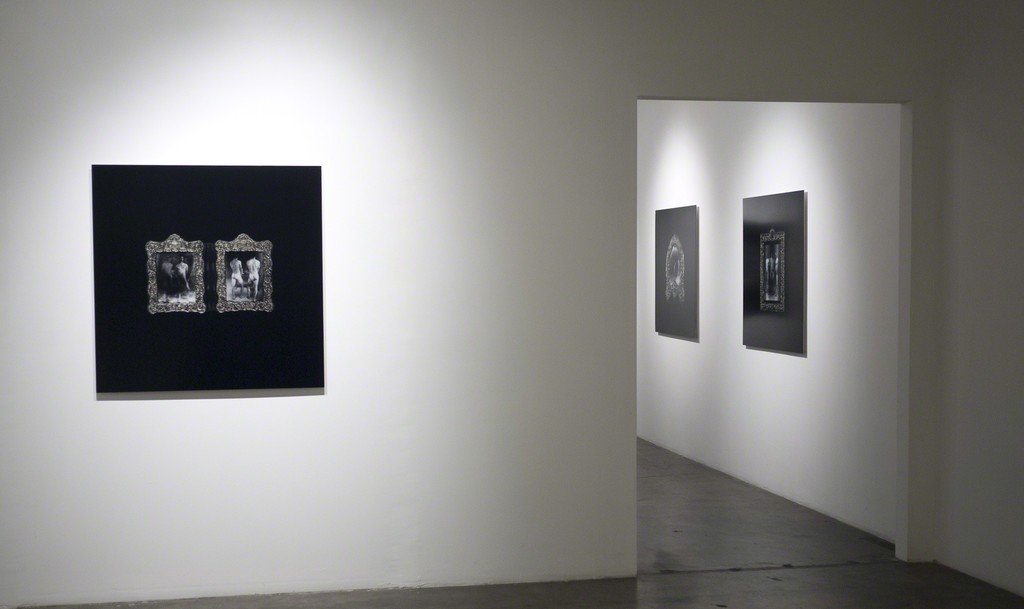 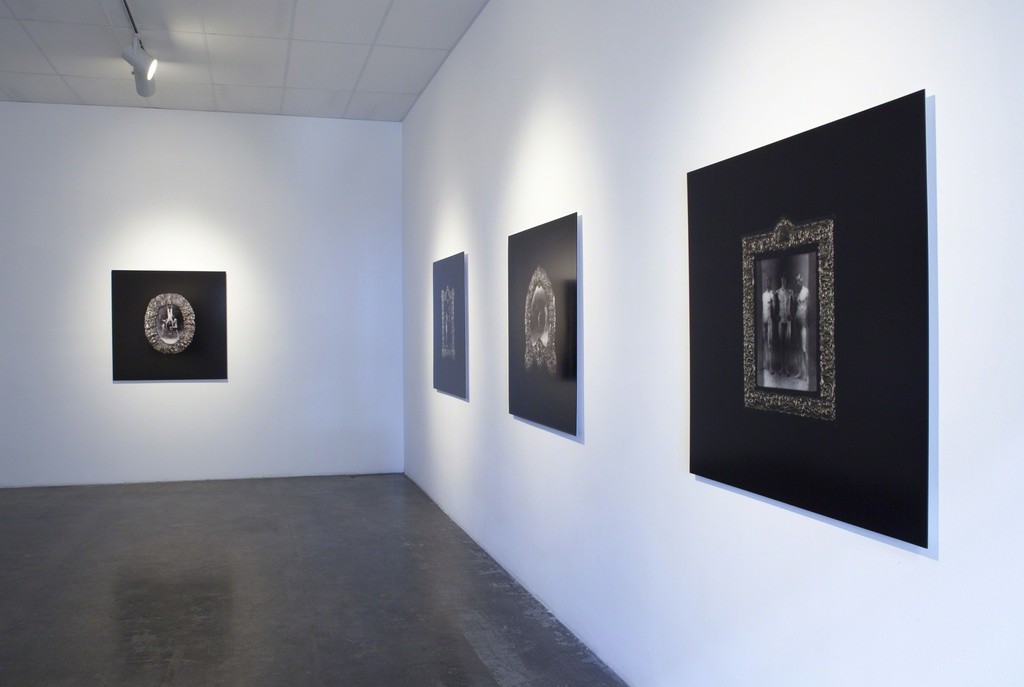 This was our first exhibition of video and photographic works by Los Angeles and Maine based artist Tad Beck, on view through February 19th. Following on the heels of his solo exhibition at the Los Angeles County Museum of Art, Tad Beck: Palimpsest, this exhibition will feature four major bodies of work, including previously unseen members of the “Palimpsest” series.
The Philadelphia painter Thomas Eakins (1844-1916) used photography to pose and study his models, before incorporating them into paintings. An album of his work was recently uncovered, dubbed the ‘Grafly Album.’ Beck restaged Eakins’ original tableaux using models from his own social circle, then composited them into the original photographic settings. Beck matches Eakins’ models limb for limb, but allows anachronistic elements (wristbands, hairstyles) to reveal his digital overlay on top of the “original.” The resulting images are mounted in period-appropriate silver repoussé frames, borrowing from Beck’s “fictional history” of the original silver prints. The framed works are then re-photographed against a monochromatic black field, and finally printed as monolithic 42-inch squares. Beck confronts Eakins’ Victorian moral-aesthetic with the rigors of his minimalist-conceptual artistic practice.

Beck’s initial interest in Eakins came through accidental similarities between that artist’s Swimming, 1885, to his own Roll (2003), a four channel video installation included in the current exhibition. To realize the low angle Beck unknowingly mimicked Eakins’ actions from over a century before by swimming alongside his models. Each artist, to create their work, had to tread water at the literal foot of the action to capture the scene with such intimacy. Roll displays four models, rhythmically engaged in the practice of ‘Log Rolling’ in an abandoned granite quarry on the artist’s native island of Vinalhaven. The bucolic mimicry of Eakins’ landscape establishes Beck’s work in the same formal space as his 1880’s predecessor. This piece, an early work for the artist, combines references to Eakins and Nauman, structuralist films and Jackass, the movie. It also defined the direction of the next ten years of artistic practice for Beck.

Stroke, from three years later, deploys a similar humor and futility of repetition in its image of two nude men sitting aside indoor rowing machines just off the coast of Maine. Filmed from above, each impotent Adonis is set adrift in a fishing dory. Astride their exercise machines, the models highlight the distance that modern man has fallen from effective action in the world. In their repetitive activity, they are aggressive and physically committed; from the viewer’s distance they are docile, even complacent in their futility.

The fourth and most recent body of work, a series entitled Figureheads, 2010, will debut at Samuel Freeman. Beck employs a series of visual translations, rephotographing polaroid images of his models posing as live-model figureheads hanging from the bowsprits of anchored boats. These men are figuratively and literally the artist’s “Muse” protecting and leading the way safely out to sea. Through Beck’s lens, men are understood by what they do and how they are doing it, and crucially in being seen in the midst of their endless pursuit.

Each of his distinct bodies of work speaks to the gulf between image and action, posing athletic nudes performing actions without consequence. The futility of their actions releases the pleasures in looking at the nude figure in action, presenting a pointless grace in athleticism. It is the viewer who is affected by the action, not the models nor their environment. No work is accomplished in their play, no result from their activity. In this interpretation, Beck reveals the truth to this work: we like to look at the body. We, the audience, are entranced by the figures, and should not feel ashamed to enjoy something so energetically futile. A social dissonance arises when the subjects of gender and sexuality are broached; as an openly gay artist, Beck’s depictions of the elegant nude subtly usher the viewers into a role that might make them uncomfortable if stated more aggressively. The viewer – straight, gay, male, or female – is allowed and encouraged to take pleasure in the visual forms, not forced, not coerced, but ushered quietly into an alternate viewpoint. The societal architecture of desire is left ashore as we drift out on those aimless boats, floating away from our assumed shoreline of reference.

In an upcoming issue of ArtNews, there will be several investigations of the change in view when the male nude is approached by a female artist. Beck’s usage of the nude figure returns us to the age of Thomas Eakins, where the fact of being unclothed was accepted, without question, as an aesthetic state without political or social undertones. Roll, Stroke, Cliff Jump and Palimpsest each offer the viewer an invitation to look at ourselves looking. When engaging with the work the conceptual layer is not forced upon us, we are simply a part of the action, futile, beautiful, and complete. Floating, hanging, rolling, jumping to nowhere, Beck deftly outmaneuvers the conservative teeth of identity politics that would like nothing more than to dull the visceral pleasures in lieu of inflammatory argument.