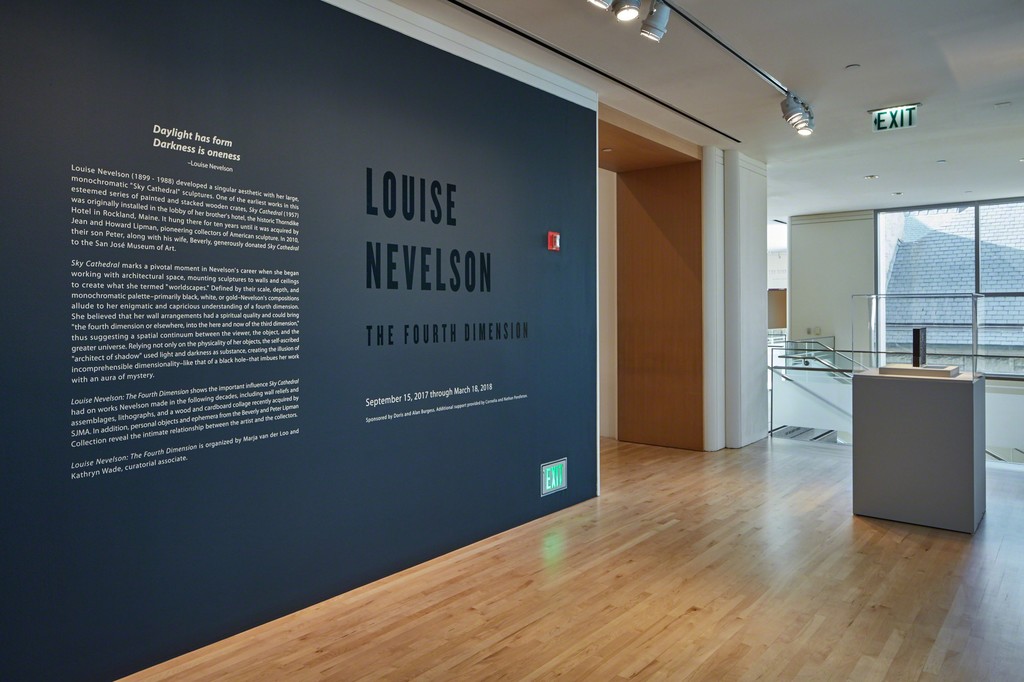 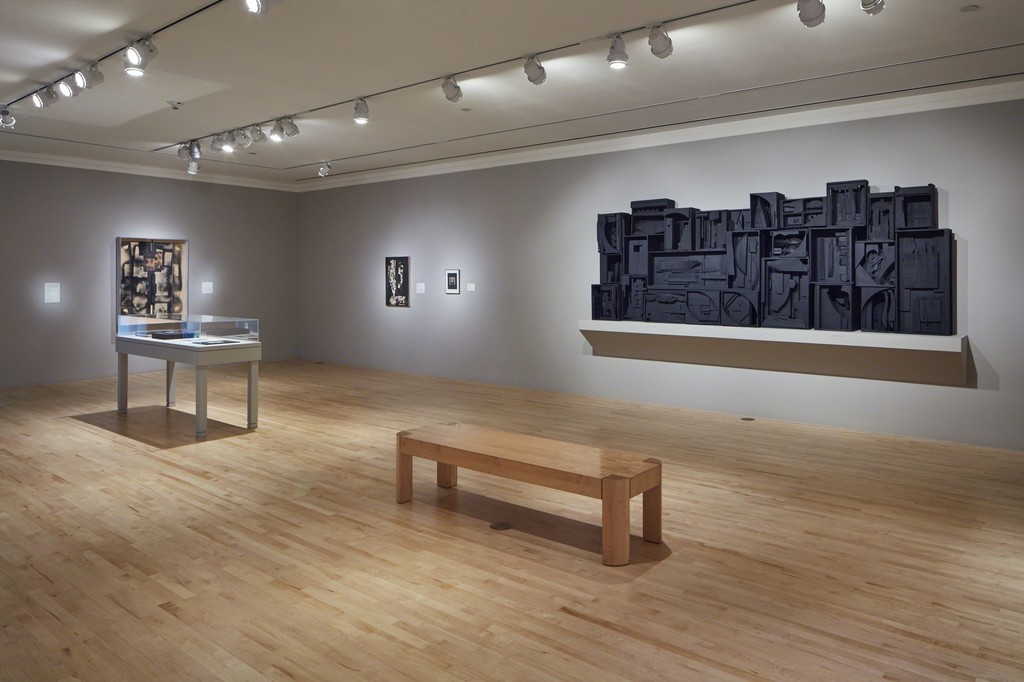 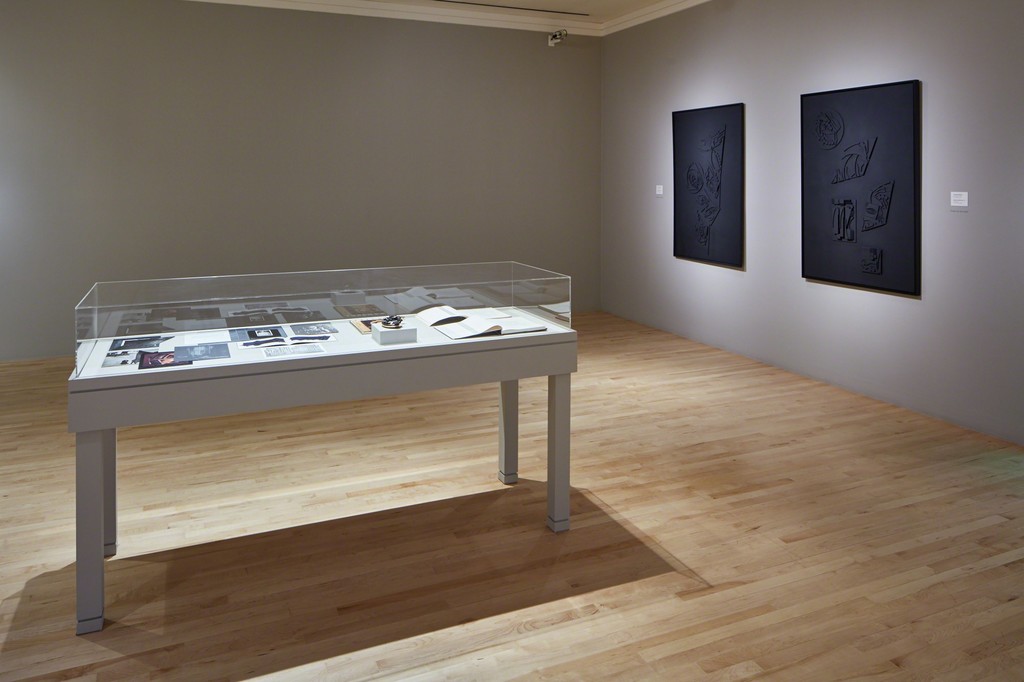 Louise Nevelson’s Sky Cathedral (1957), one of the most significant objects in the San José Museum of Art’s collection, will be the focus of a new exhibition this fall. Louise Nevelson: The Fourth Dimension, on view at SJMA September 15, 2017– March 18, 2018, will also feature several related works by Nevelson (1899 – 1988), including Collage (1974), a new acquisition that will be on view at SJMA for the first time, and rarely seen ephemera from a private collection.

Sky Cathedral is a seminal artwork and marks an important stage in Nevelson’s artistic career. In 1957, Nevelson moved away from free standing sculptures placed on pedestals into working with architectural space. Sky Cathedral is one of the earliest examples of a series of similar stacked box work bearing the same title. The series premiered to critical acclaim in the 1958 exhibition Moon Garden Plus One at the Grand Central Moderns Gallery in New York. Nevelson staged a dramatic environment lining the walls, windows, and ceiling with her monochromatic sculptures and tightly piling them throughout a dimly lit gallery. The installation entreated viewers to experience, rather than merely see, art.

Nevelson specifically made Sky Cathedral for the lobby of her brother’s establishment, the Thorndike Hotel, in Rockland, Maine, where it hung for ten years. Jean and Howard Lipman acquired the piece directly from Nevelson’s brother in 1967, and their son Peter Lipman and his wife Beverly donated the work to the San José Museum of Art in 2010.

The title of the exhibition refers to Nevelson’s belief that the spiritual, otherworldly quality of her wall arrangements brings “the fourth dimension or elsewhere, into the here and now of the third dimension.”

“Sky Cathedral embodies the artist’s enigmatic and capricious understanding of a fourth dimension, suggesting a spatial continuum between the viewer, the object, and the universe,” says Kathryn Wade, curatorial associate at SJMA and curator of the exhibition (with Marja van der Loo, former curatorial associate). “Using a monochromatic palette, Nevelson created the illusion of incomprehensible dimensionality—like that of a black hole—imbuing her work with an aura of mystery.”

In June, SJMA acquired Collage (1974), a black paint, wood, and cardboard collage, a gift from an anonymous in honor of the Lipmans. The exhibition will also include a selection of other collages and works on paper by Nevelson as well as personal objects and ephemera from the Beverly and Peter Lipman Collection, including notes from the artist, rare books, and a single black box sculpture.

Public programs offered in connection with the exhibition will include a Creative Minds lecture by Elizabeth A. T. Smith, art historian and executive director of the Helen Frankenthaler Foundation, on Sunday, November 19, at 3 PM. Tickets and information on this and related programs will be available at SanJoseMuseumofArt.org/visit.

Louise Nevelson: The Fourth Dimension is sponsored by Doris and Alan Burgess. Additional support is provided by Cornelia and Nathan Pendleton.

ABOUT THE ARTIST
Born in Poltava Governorate, Russia (now Ukraine) in 1899, Louise Nevelson relocated to the United States with her family in 1905 and went on to study visual and performing arts at New York’s Art Students League. While in New York she studied alongside artists such as Diego Rivera and Stanley William Hayter and eventually joined the Works Progress Administration through the Educational Alliance School of Art in the mid to late 1930s. Over her long career, Nevelson received a National Medal of Arts from President Ronald Reagan, a MacDowell Colony Medal, and a grand prize for work in the Art USA exhibition at the New York Coliseum. Her work has been featured in numerous exhibitions and is in the collections of the Albright-Knox Art Gallery, Buffalo, New York; Anderson Collection at Stanford University, Palo Alto, California; The Art Institute of Chicago; Carnegie Museum of Art, Pittsburgh; Detroit Institute of Arts; High Museum of Art, Atlanta; Hirshhorn Museum and Sculpture Garden, Washington, DC; Los Angeles County Museum of Art; The Museum of Modern Art, New York; The Nelson-Atkins Museum of Art, Kansas City, Missouri; San José Museum of Art; Tate Gallery, London; Walker Art Center, Minneapolis; and Whitney Museum of American Art, New York. Nevelson died in New York City in 1988.