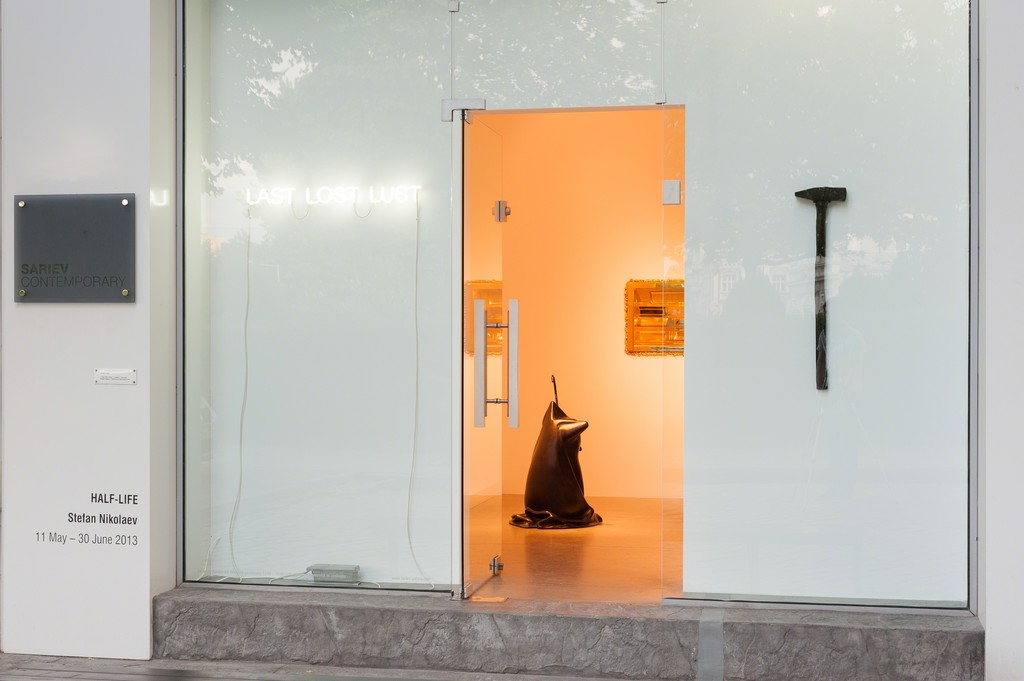 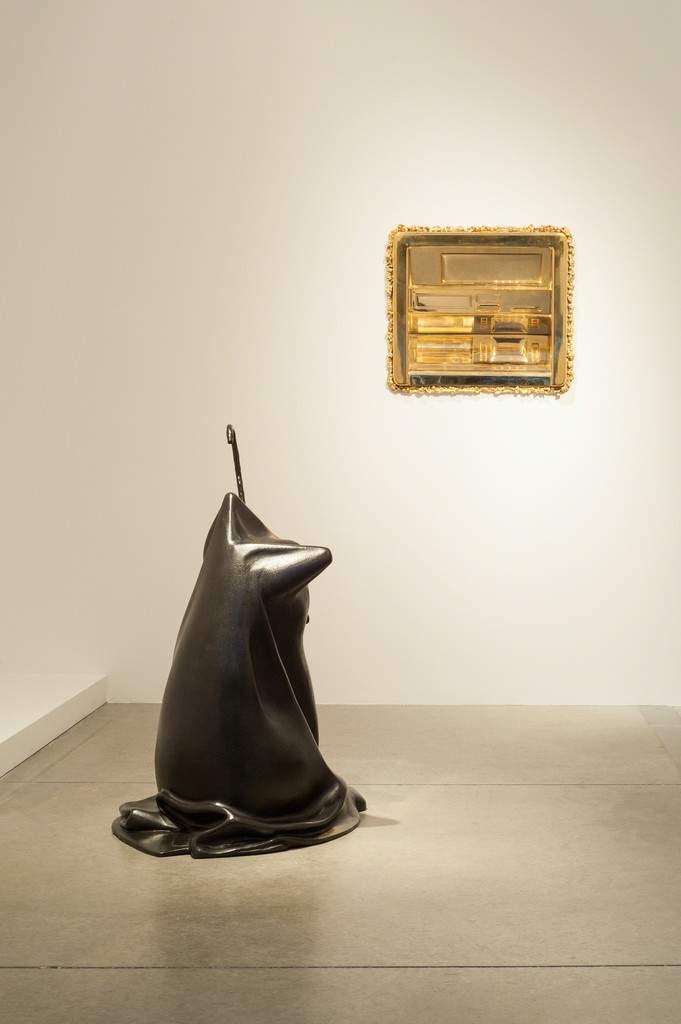 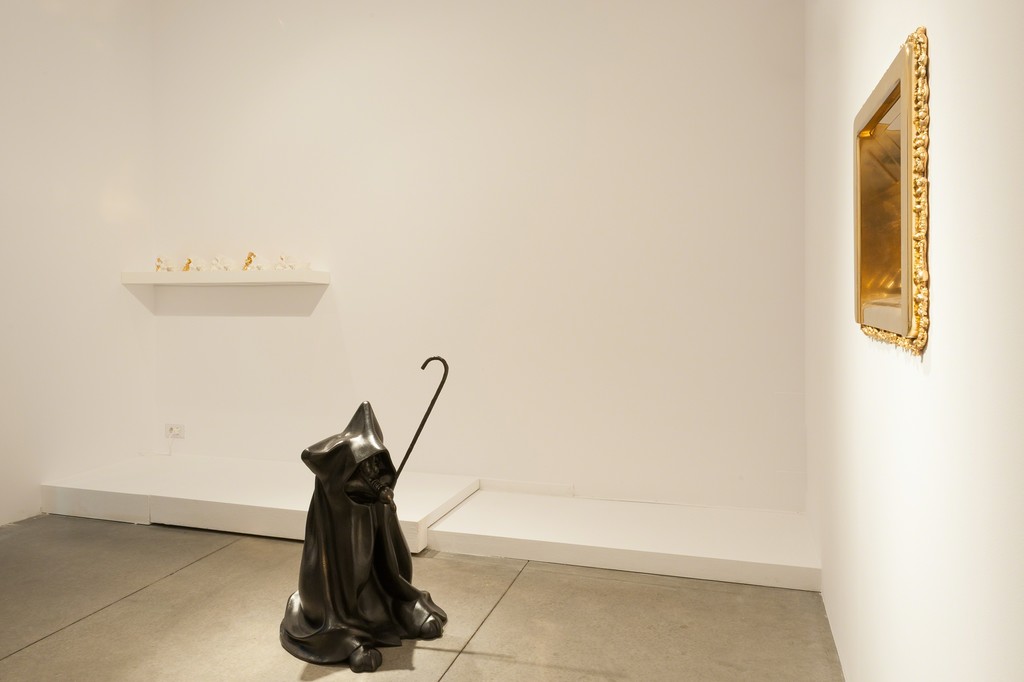 May 11th (Saturday), 6.30 p.m., Sariev Contemporary
Official opening of the exhibition in the presence of the author and the curator

May 11th (Saturday), 5.00 a.m., artnewscafé, Plovdiv, 38 Otets Paisiy St.
Conversation with Stefan Nikolaev hosted by the curator Emile Ouroumov, presentation of Nikolaev’s new catalogue “One for the Money, Two for the Show”

The exhibition “Half-Life” is Sariev Contemporary’s first presentation of works by Paris and Sofia based artist Stefan Nikolaev (b. 1970, Sofia). The show, which will be on display between May 11th and June 30th, will bring forward a selection of recent and specific pieces reunited with significant examples of the artist’s previous work.

A conversation with Stefan Nikolaev will be hosted on the day of the opening at artnewscafé by the curator Emile Ouroumov. Stefan Nikolaev’s recently published monograph “One for the Money, Two for the Show” (Presses du reel, France, 2013, bilingual, 240p, with texts by Iara Boubnova, Paul O’Neill and Emile Ouroumov) will also be presented on this occasion.

The introductory text for the exhibition has been written by Emile Ouroumov.

Not without some irony – a frequently encountered working tool (or weapon) for Stefan Nikolaev – “Half-Life” aims at a sculptural outcome of various social topics such as the leftovers of personal freedom in contemporary consumer society, the primitive social importance of violence, which continues to be legal tender, and the possible interrelations (or shortcuts) between the sphere of private history on the one hand, and fundamental historical, socio-political and aesthetic themes, on the other.

The title of the exhibition, which refers to the period of partial radioactive decay in nuclear physics, stems from a desire to deconstruct the retrospective exhibition format, reminding us of our cyclic schizophrenic existence between the aspiration to progress and our chronic cultural and economic mediocrity. The works in “Half-Life” question how we can continue to live on the continental divide between the illusion of permanent growth and the reality of societal decay (with no Hollywood happy ending in sight).

One example for this is Untitled (Hammer), 2012 – a far-reaching chronological shortcut, reminiscent of the famous opening scene of Stanley Kubrick’s 2001, A Space Odyssey, in which, at the dawn of man, a tribe of man-apes discovers how to use a bone –first as a hunting tool and later as a weapon in territorial conflicts with another tribe. The tool is then used in a match cut to another scene with an orbiting spacecraft, alluding to parallels with an advanced futuristic society.

Similarly, Nikolaev’s work points at the streak of violence inherent in any form and degree of civilisation. The choice of bronze is an intentional reference to the importance of this metal as a “founding” material in the evolution of humanity. In earlier ages, its exploitation, frequently away from mining locations, gave rise to basic forms of commerce and the differentiation between use and exchange value. Then the first commercial roads came about and wealth began to be accumulated locally, paving the way to conquest wars and the use of fortifications, as well as to wealth-based social stratification. On the other hand, bronze has been used by artists and craftsmen since Antiquity, progressively becoming the material of choice for classical statuary – a supposedly noble commemorative use, which nevertheless remains subjugated to political, ecclesiastical or pecuniary power.

By juxtaposing these two distinct but inextricably linked uses, Nikolaev’s bronze hammer emphasizes the multifaceted foundations of societal relationships, which, while striving for sophistication, retain an inherited spectre of the primitive and the violent.

Adjacent to the bronze hammer is the neon Repeat After Me, 2013 (made especially for the exhibition) – a muted response to the diminishing personal freedoms in contemporary society. Ironically enough, it can also appear as a mnemonic device to help us learn how to live in a downsized social sphere – just repeat after me: Good, better, best. Last, lost, lust…

Both of the afore-mentioned works are displayed inside a specially-designed gallery façade, an environment reminiscent of storefronts. Thus Mr. Nikolaev’s business acquires a respectable “brick and mortar” vitrine, a highly valuable asset in these times of crisis. But inside the gallery space, a shift towards hard currency is immediately discernible with Cry Me A River (2009), a gold-plated ATM.

Increasingly drastic gold-plated measures follow with What Does Not Kill You Makes You Stronger (2013). The cranium-shaped goblets unearth a peculiar artefact from Bulgaria’s ancient history: the silver-plated drinking vessel which the early 9th century Bulgarian ruler Khan Krum the Terrible made out of the skull of his defeated opponent, the Byzantine Emperor Nikephoros I. Apart from this extravagant gesture, the Khan was known to possess the virtue of temperance, introducing a stringently enforced drinking ban, some eleven centuries before the American Prohibition of the 1920s.

Further on, I hate America and America hates me (2009/2013) shatters past idols. The coyote sculpture refers to Joseph Beuys’ historic performance, in which, during his first and only visit to the United States, he spent three days in the company of a coyote. Contrary to the 1974 performance, Nikolaev’s work does not concern itself with the desire to reconcile nature and technology or reclaim the original, paradigm-setting image of freedom of the vast American plains. The small, Beuys-reminiscent statue of a coyote wearing a felt garment and a cane is nothing short of an irreducible paradox: the wild animal of American Indian fame transformed into Coyote, the perennial loser from Tex Avery’s cartoons or Volk, from the derivative Soviet series Nu Pogodi.

Stefan Nikolaev (b. 1970 in Sofia, Bulgaria, based in Paris and Sofia) began his studies at the Fine Arts High School in his native city (1983-1988), followed by a course at the Paris School of Fine Arts (1989-1994) and Winchester School of Art in England (1992). There have been many solo shows of his work, including Holy Spirit Rain Down, at Les Eglises contemporary art centre, Chelles, France (2010); New Works Old Dreams, Michel Rein gallery, Paris (2010); Come to Where the Flavour is, CCA, Glasgow (2006); Balkanton, ATA Gallery, Sofia (2004). His work has also been shown in a large number of group shows, including Beyond Credit, Antrepo 4, Istanbul, 2010; Periodic Table, Munich, 2009; Verstehst du das? Neue-Medien-Kunst aus Südosteuropa, Ausstellungshalle zeitgenössische Kunst Münster, 2006; Joy, Casino Luxembourg, Luxembourg, 2005; Prosismic, Espace Paul Ricard, Paris, 2004; A Shot in the Head, Lisson Gallery, London (2001); ZAC, Arc/Musée d’art moderne de la Ville de Paris, 1999; Côte Ouest – Global Motion, University Art Museum, Contemporary Arts Forum, Santa Barbara; Andere Sichten, In Vitro and Altro/Field, Kunsthaus Zurich (1999); Multiples, Temple Bar Gallery, Dublin, Ireland. He has taken part in the Lyon Biennial (2007) and presented Bulgaria in the Venice Biennial (2007, together with Ivan Moudov and Pravdoliub Ivanov), as well as the biennials at Gwangju, Korea and Cetinje, Montenegro (2004). His work has also been shown at various art fairs: ArtBasel, FIAC, The Armory Show, ARCO. For his work for the 4th Cetinje Biennial, Stefan Nikolaev was awarded the UNESCO art prize.

Emile Ouroumov (b. 1979, Plovdiv, Bulgaria) studied Visual Arts and Museology (Master’s degree, Paris 8 Saint-Denis University, 2005) and Curatorial Studies (Professional Master’s Degree, Paris 1 Pantheon-Sorbonne University, 2009). He has assisted the curators Hans Ulrich Obrist (Serpentine Gallery, 2009-10), Odile Burluraux (Musée d’Art moderne de la Ville de Paris, 2009), Pierre Bal-Blanc (Centre d’art contemporain de Brétigny, Greater Paris, 2011/12), and has also gained experience as a gallery assistant at gb agency in Paris (2010) and conservation department / public programmes assistant at MAMCO (Geneva, 2011-12), followed by residencies in Zurich, Geneva and São Paulo. He has curated and co-curated the exhibitions There is as yet insufficient data for a meaningful answer (Villa du Parc art centre, Annemasse, France), Déjà Lu (2011, on the subject of press release lingo), Paper Jam #1 (2010, Paris, a printed exhibition), Paper Jam #2 (2012-), Projection (itinerant video exhibition, 2010-11) and A la limite (2009, Paris, Galerie Journiac). He has recently published an essay on Stefan Nikolaev’s exhibition at the art centre Les églises in Chelles (Greater Paris) and edited Nikolaev’s catalogue One For the Money, Two for the Show, with the Presses du reel. He is currently working on the exhibition The Galápagos Principle (Palais de Tokyo, Paris, 2013). His prospective and research interests include the possible passageways between the roles of the curator and the artist, uncommon formats of curating, the relationship between language and art, and the paratexts accompanying contemporary art exhibitions, such as critical writing and press releases.