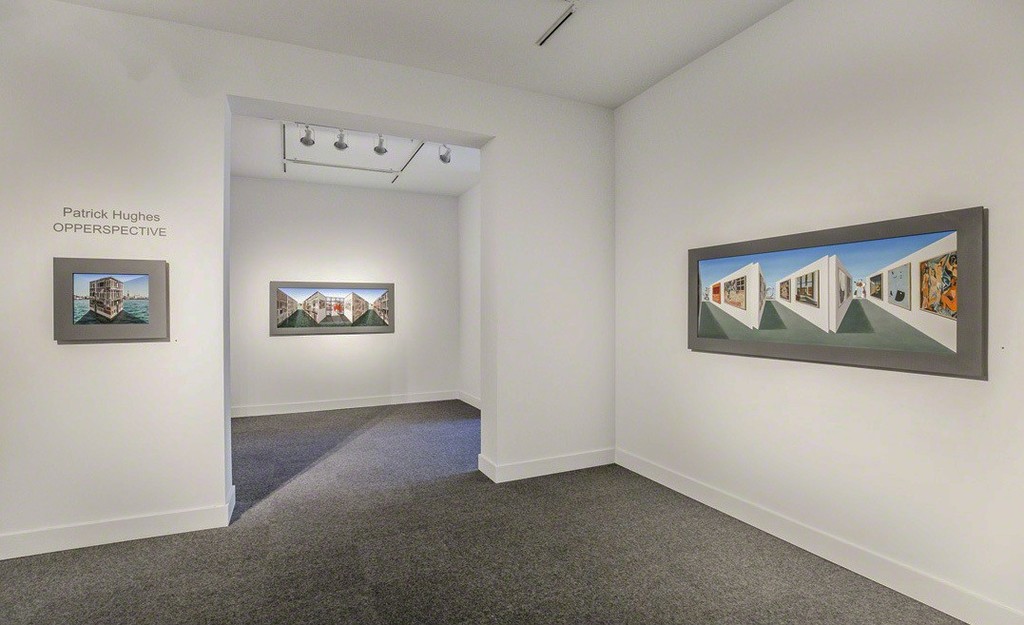 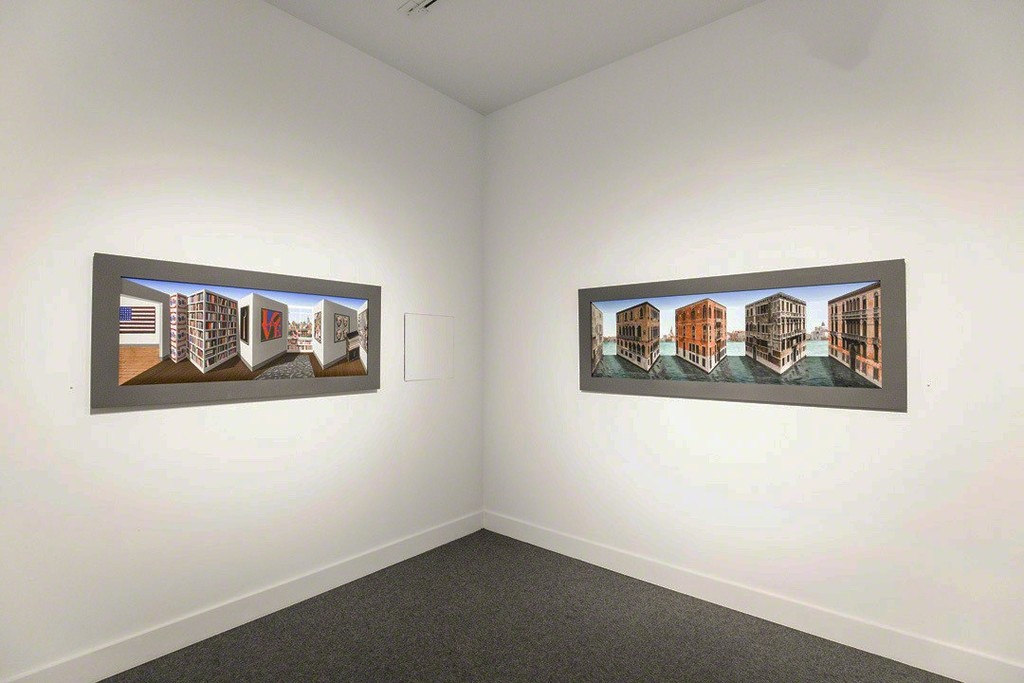 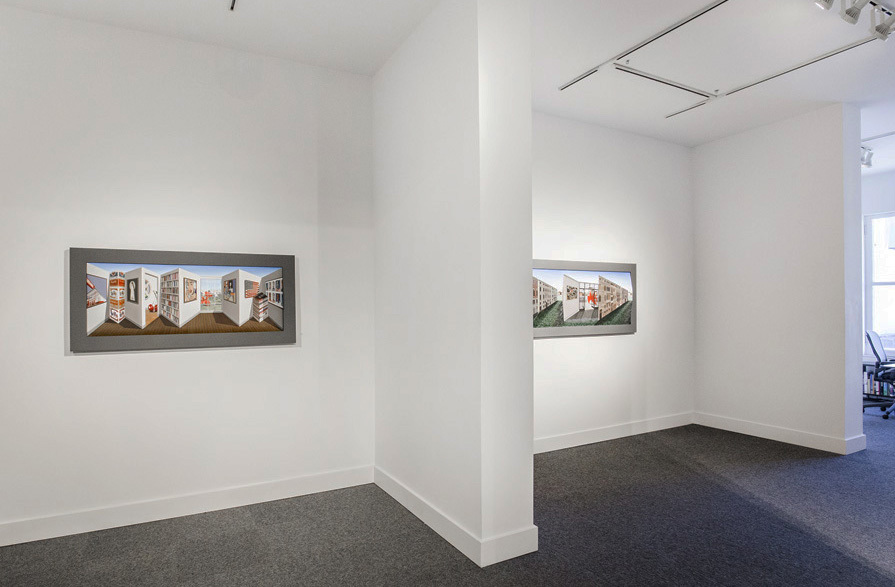 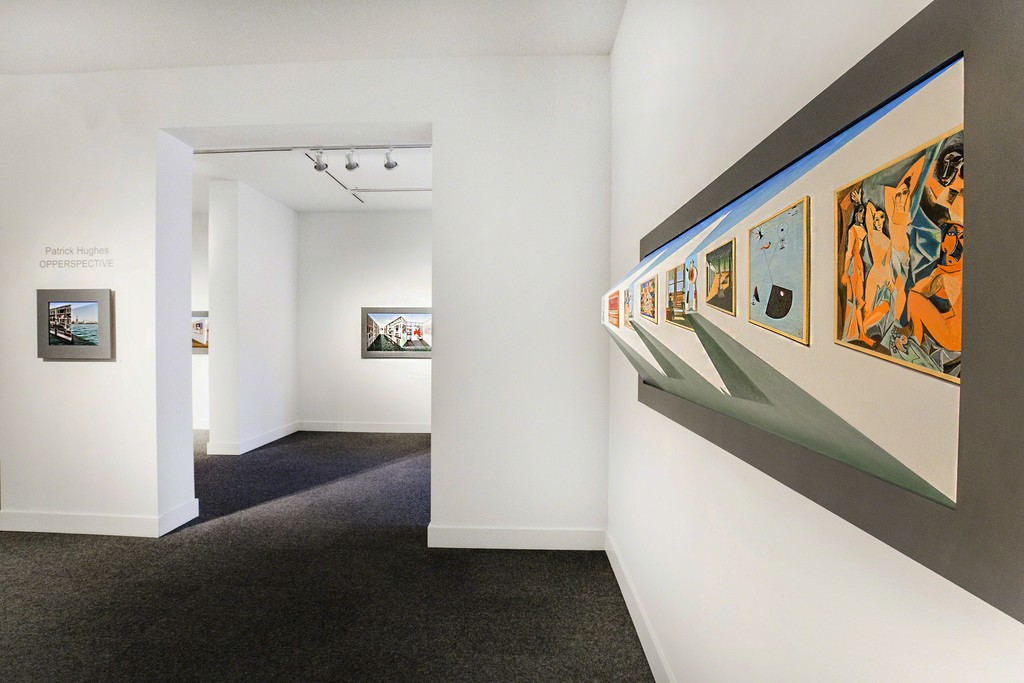 In OPPERSPECTIVE, his fourth solo exhibition at Scott Richards Contemporary Art, celebrated British artist PATRICK HUGHES continues his pursuit of the paradox with a new series of three-dimensional, illusionistic, painted wood constructions. A reception for the artist will be held on Thursday, June 4, 5:30-7:30 pm. The exhibition continues through June 27.

In Hughes’s quirky and instantly recognizable wall reliefs, the line between sculpture and painting is blurred, and space itself is manipulated with disorienting results. The painted panels jut away at angles from the wall, but when the works are viewed head-on, their three-dimensionality disappears. By reversing the apparent perspective in the subject matter, and uncovering multiple points of view simultaneously, the paintings acquire a sense of enigmatic motion. As the viewer walks back and forth in front of a work, it takes on the appearance of a flat plane that moves and shifts, obscuring and revealing different aspects of the painted scene.

Hughes has been fascinated with puzzles, perspective and optical illusion all his life. He created his first three-dimensional paintings in 1964, and has spent the last several decades exploring and honing his signature style. Favorite subjects, appearing in different forms throughout his works, include artwork, architecture, books, landscape, and doors that open onto mysterious hallways or distant horizons.

In a recent interview in ARTnews, Barbara A. MacAdam wrote, “Hughes’s work fits no category but partakes of many. Falling between Surrealism, Pop art, and Conceptualism, with nods at Cubism and even Minimalism, it is most distinguished and energized by homemade magic.”

Patrick Hughes was born in 1939 in Birmingham, UK, and is based in London. Internationally recognized as a major contemporary British artist, he is also a designer, teacher, and author. His works have been exhibited in major cities such as London, Paris, New York, Toronto, Seoul, Los Angeles and Chicago and are held in many public collections, including the British Library and the Tate Gallery in London; the Gallery of Modern Art, Glasgow; the Deutsche Bibliothek, Frankfurt; and the Denver Art Museum.