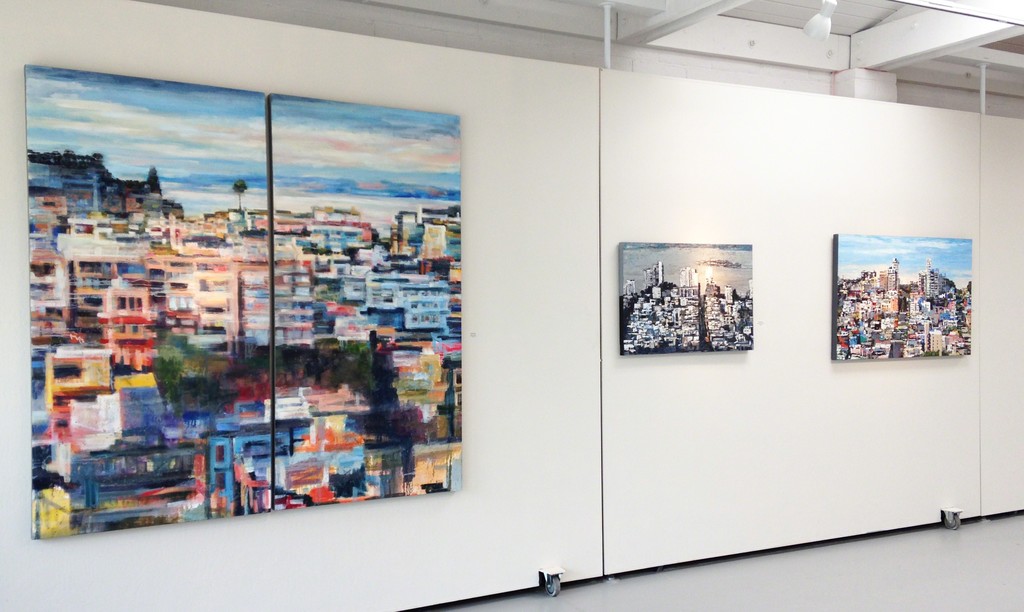 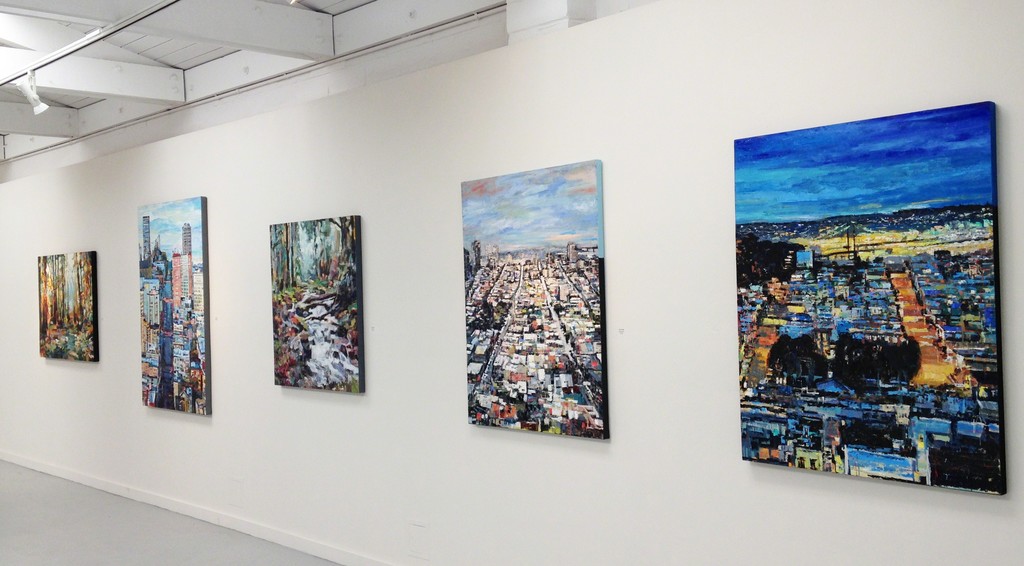 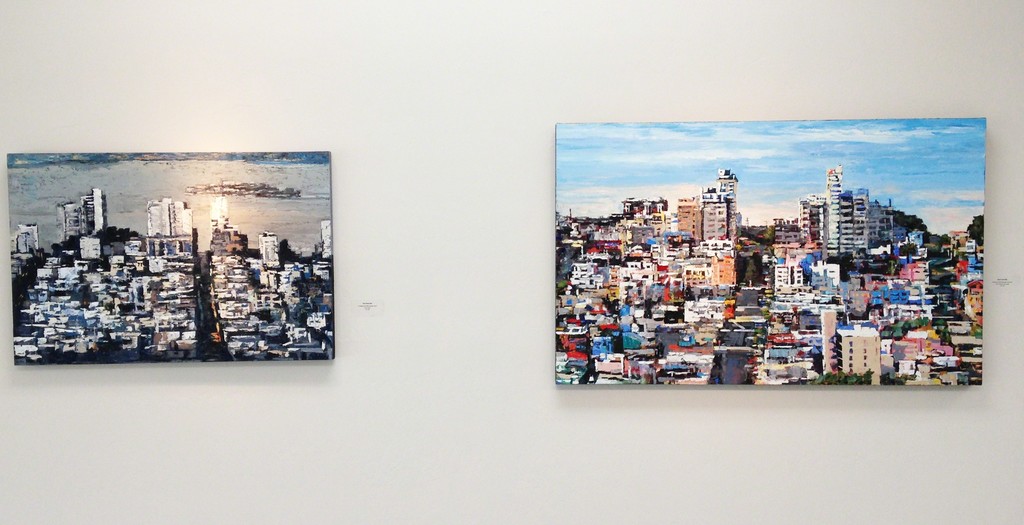 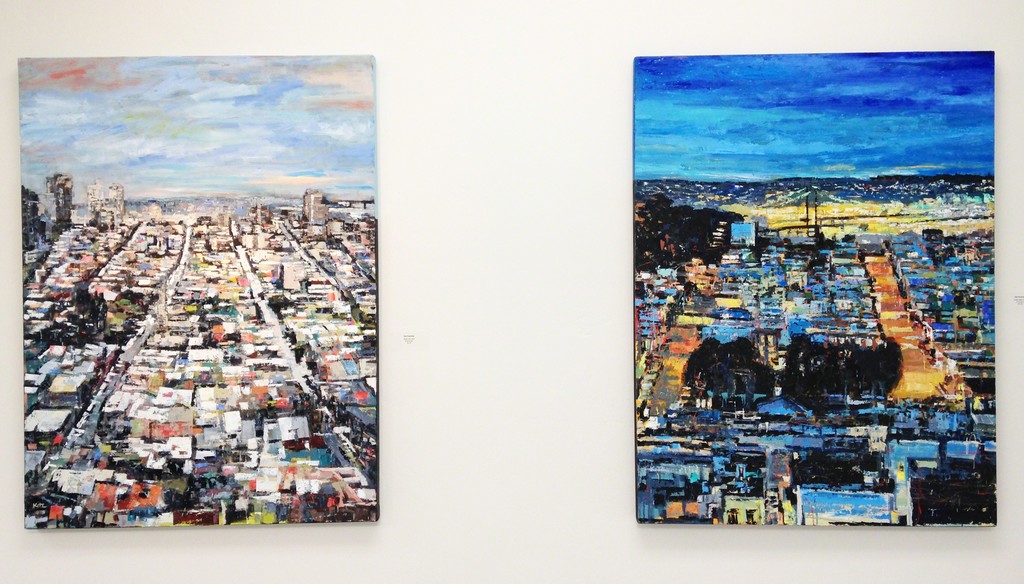 Kim Ford Kitz grew up in Southern California Beach towns, lived in San Francisco as a young adult and now lives and works in a former furniture warehouse converted into an airy studio and apartment in San Anselmo, the charming Marin County town she’s called home for many years.

So you can say she’s a California girl who comes by her West Coast aesthetic honestly, drawing inspiration from the renowned Bay Area artists who came before her, like Richard Diebenkorn and Wayne Thiebaud, David Park and Joan Brown. The 54-year-old painter takes abstract expressionism and elements of Bay Area Figuration and reimagines them for the rock ‘n’ roll generation.

In her first solo show, “California,” August 16 through Sept. 15 at the Seager Gray Gallery in Mill Valley, Kitz emerges as an artist with a fresh new way of seeing the Golden State, from its agricultural valleys, wine country hills and Southern California beaches to its redwood forests and the steep streets of San Francisco.
For many, Kitz is best known for her acclaimed cityscapes of actual locations like Telegraph Hill, with obvious, kitschy landmarks like Coit Tower left out of the frame. Instead, we see buildings, some real, most made up to conform to the artist’s sense of balance and composition, stacked in colorful boxes beside streets that drop vertiginously to the bay.

She often cuts in thick loads of paint with a palette knife, so that the squares and rectangles that represent blocks of buildings have a sharp clarity, an edge that gives her work a sure- handed intensity. Working on large, vertical cityscapes, some as big as six feet tall by six feet wide, she stands at a distant end of her studio, maybe 40 feet away, and studies the far off skyline for a while before moving back in close to the unfinished canvas, knowing almost intuitively what she needs to do.

“Once I know the skyline and what’s important to the composition, then I just go with it,” she says, pointing to a bare middle section of a painting of a dense San Francisco neighborhood. “This is all going to be made up,” she explains. “Once the colors make sense, I know what to do.”

She paints a view of Alcatraz from the city in moody blacks and grays, capturing the steely monochrome of “the Rock” on a foggy afternoon on San Francisco Bay. In one of her first nighttime cityscapes, “Amber Nights,” she paints the darkened urban scene in contrasting colors of yellow and blue. A major thoroughfare cuts through the grid of streets in a river of golden light.

After living in Marin County for as long as she has, she has an insider’s knowledge of its natural beauty and semi-secret places. In “Ink Wells,” the swimming hole on Paper Mill Creek in the San Geronimo Valley, for instance, she paints an impressionistic scene with frolicking bathers that is reminiscent of Cezanne.

Her series of abstract floral paintings are informed by her memories of working in her father’s flower shop when she was a girl. In a painting called “California Bliss,” the sunset silhouettes of palm trees and the faint outlines of rooftop TV antennas are set against a luscious sherbet orange sky. It was inspired by her childhood in the Southern California beach towns of Newport and Corona del Mar.

“It has a ‘70s vibe to me,” she explains. “I was on a skateboard team called Rainbow Skates. I had long blonde surfer chick hair. I remember skating down to the beach at the end of the day as the sun went down.”
Kitz showed a talent for painting and drawing when she was growing up, and often visited her uncle, Harry Ford, who was president of the California College of Arts and Crafts. “But I don’t think they thought I was serious about art, even though I was,” she says.

In college, she studied graphics, interior design and fine art, but dropped out and went to work after she was married. She was living in San Anselmo with her then husband and two young children when she decided that being a stay-at-home-mom wasn’t for her. So, after dropping her daughter off at school each day, she would drive into the city to take classes in painting and drawing at the San Francisco Academy of Art.

“I discovered that this is what I wanted to do,” she says.

When her mother moved into their in-law apartment and began taking care of her kids during the day, she became a full-time student, graduating with honors in 2005. Kitz credits her mother, Donna Ford with giving her the support she needed at this crucial time in her art education.

When her children were in school plays, she volunteered to help build sets, becoming a set designer for the San Anselmo Playhouse and Marin Shakespeare, a company that put on summer shows in an amphitheater at Dominican College.

But she was unwavering in her determination to develop her style as a painter. She was working in a studio in Sausalito when gallerist Donna Seager saw some of her paintings at an open studio in 2005 and was immediately captivated by them. She knew Kitz socially, but had no idea she was an artist. She was so taken by her work that she began showing pieces in her new gallery in San Rafael.

“It was the beginning of what she’s doing now, and it was good,” Seager recalls, commenting on Kitz’s distinctive style. “It was her.”

Since then, through talent and hard work, she has evolved as an artist, becoming more abstract and successful. This first solo exhibition is long overdue. It won’t be her last. She is moving into a new chapter in her life. With her upcoming marriage to fiance, Mark Wiegers and a steadfast love of being in her studio making art, she is where she wants to be, an artist arrived at the height of her powers.