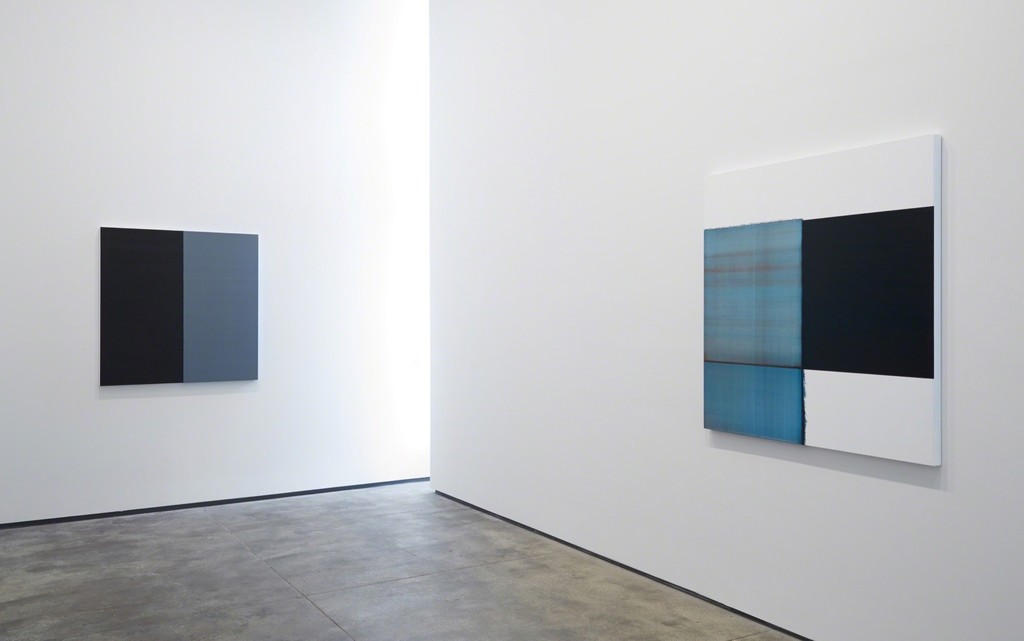 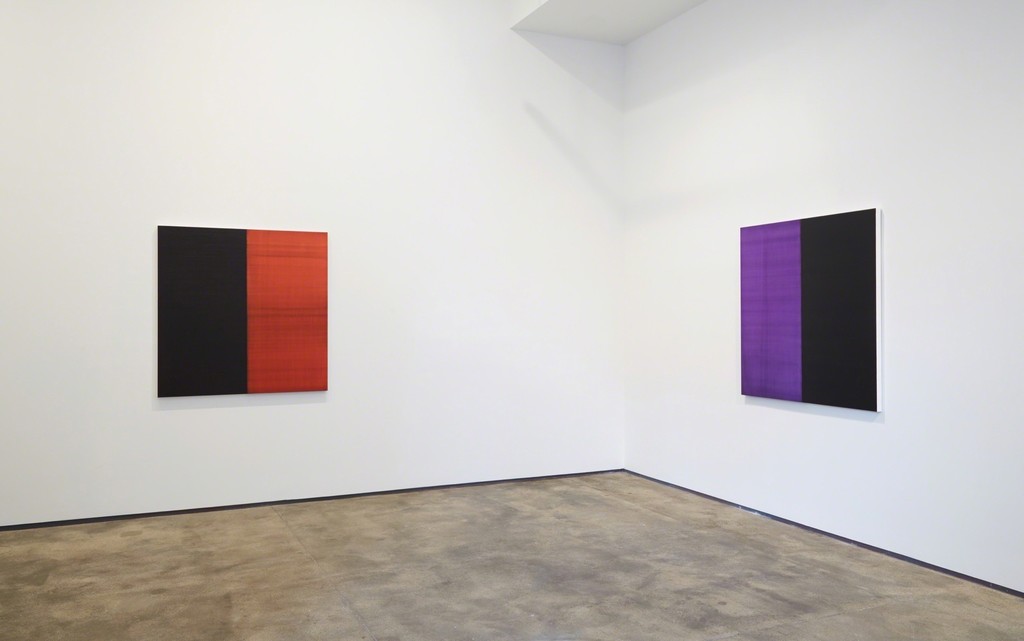 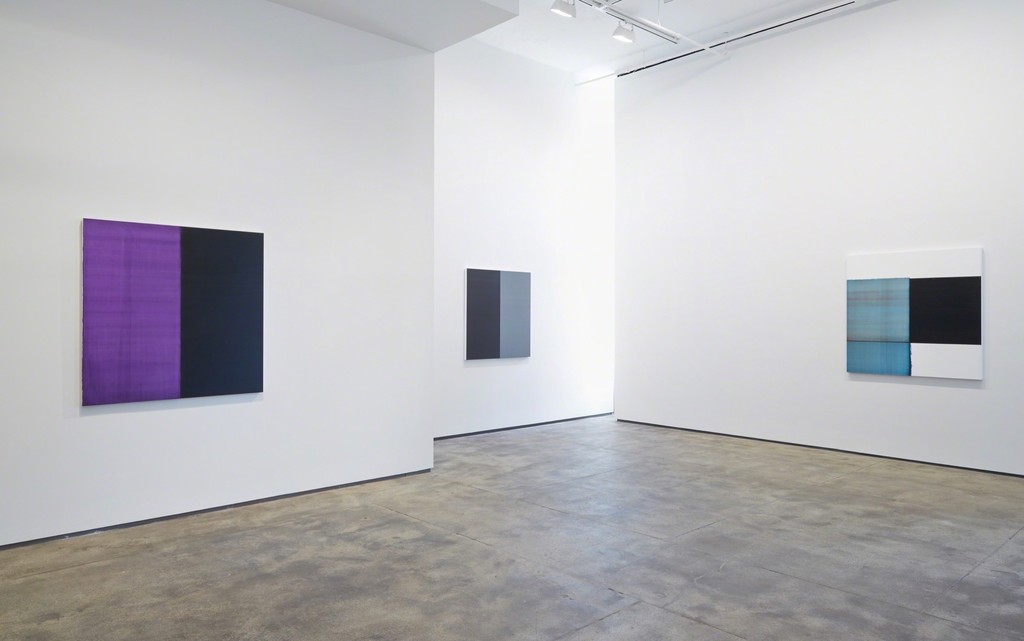 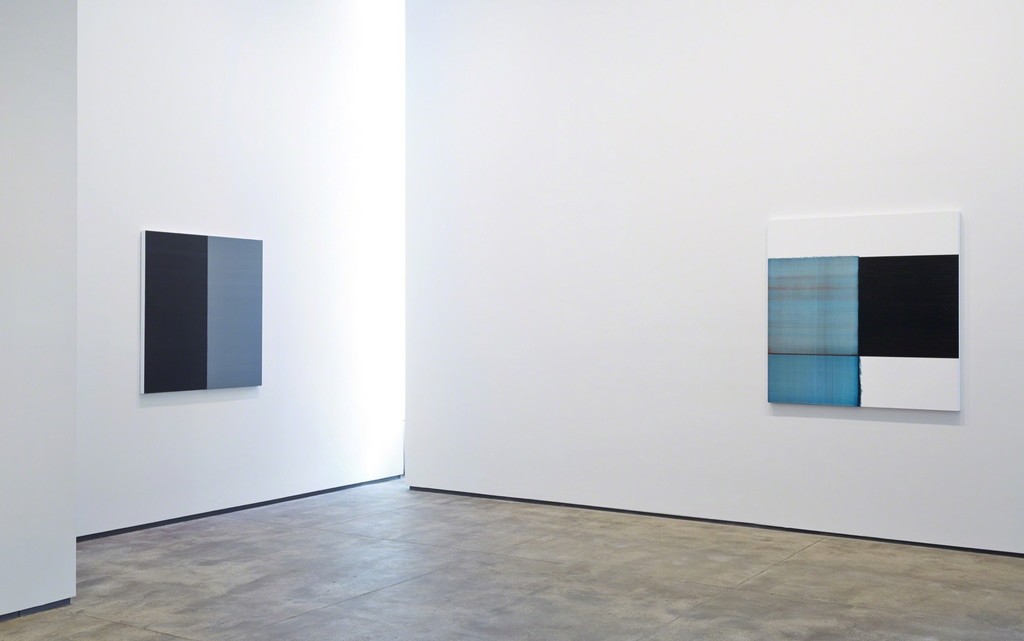 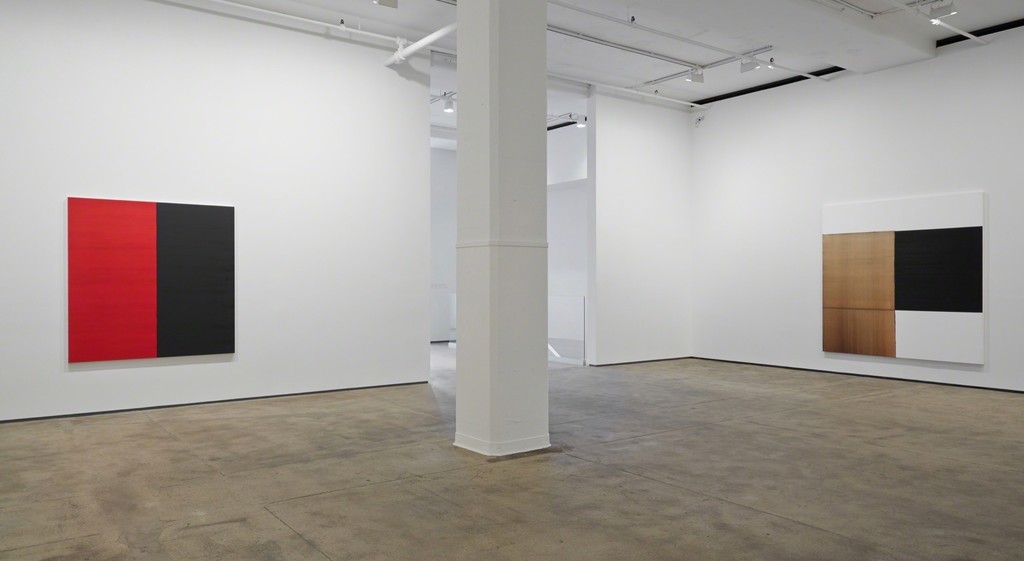 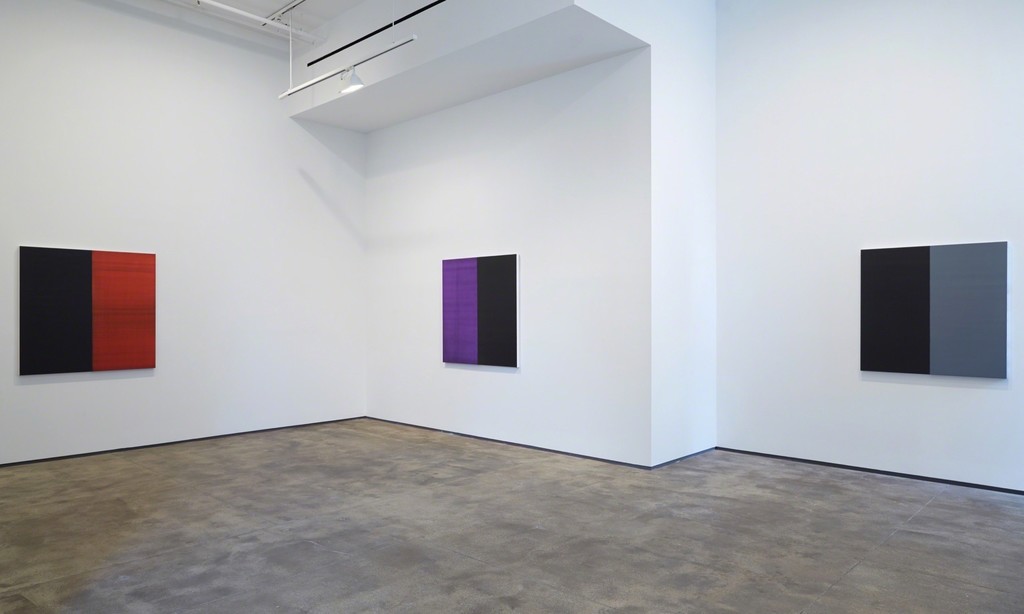 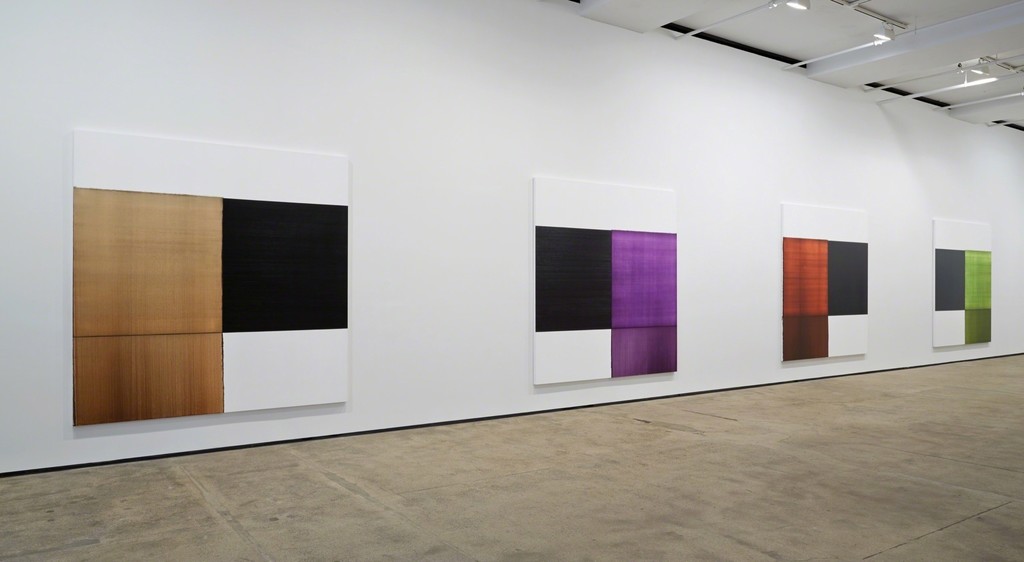 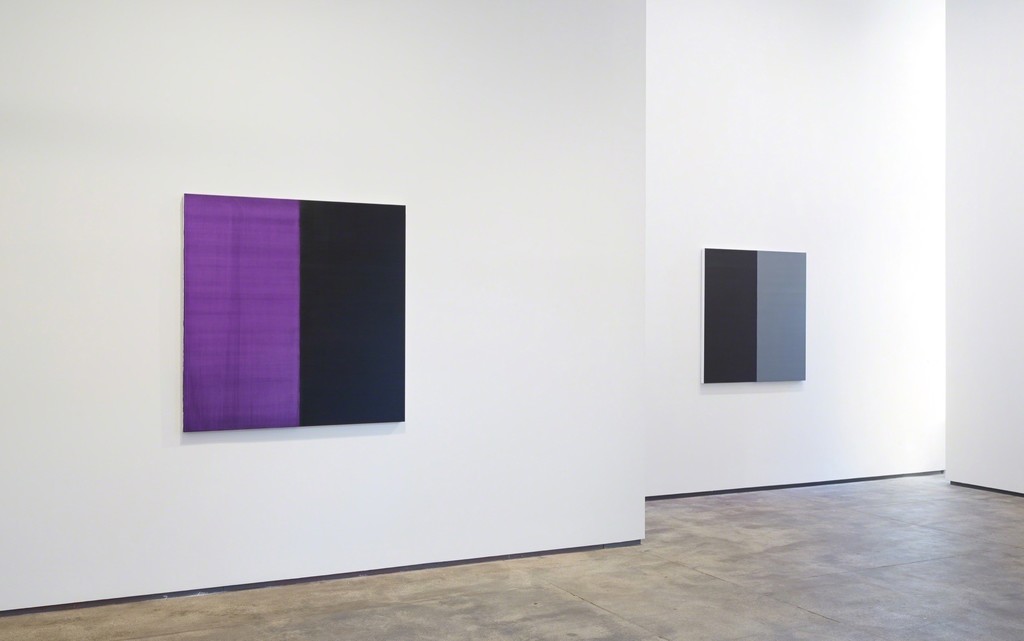 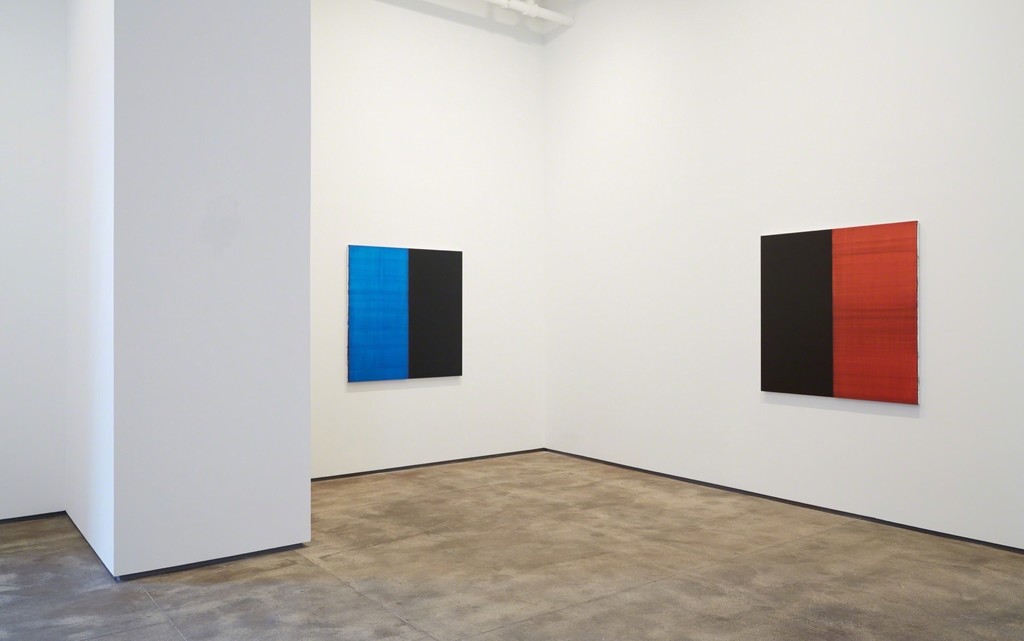 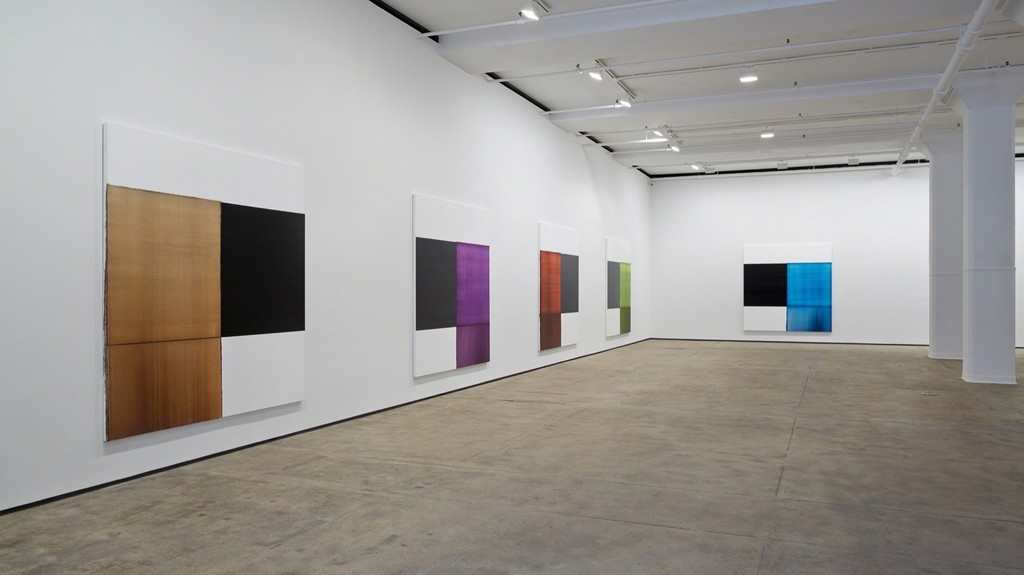 In Innes’s work, layers of paint are laid down on meticulously gessoed canvas and ultimately covered in black. Innes then uses turpentine to remove the layers from sections of the painting, revealing the luminous color that lies underneath. The process is repeated several times, alternating between application and removal. In the Exposed Paintings, the residue from this process is left on the canvas’s surface directly below the “exposed” section, creating another layer of color altogether. In the Untitled Lamp Black Paintings, the picture plane is split in half vertically; the colors are painted and left to dry before the black paint is applied and subsequently taken off on one side. The candescence of these works comes from the initial color itself, altered by the removal of the black. In a recent interview with the Wall Street Journal, Innes explained “I make a painting and work with the surface, then dissolve it, taking it off with turpentine. In many ways, I am dissolving an image that is in my head…With the paintings, [I] make a black made of many colors…until I dissolve it. Then the colors separate so that color will be revealed.”

Innes has achieved an intense luminosity with the paintings that comprise Liminal, so much so that the works almost appear to be lit from within. The new Exposed Paintings include some of Innes’s largest to date, measuring over seven and a half feet in height. The creation of the works is physically arduous as they have to be completed in a single day. The Untitled Lamp Black Paintings include the eponymously named color, a matte black of particular richness and depth. The muted surface of this matte black on one half of the paintings stands in stark contrast to the ethereal glow of the chromatic intensity on the other half. The resultant works of both series are spare, elegant canvases that combine a formal precision with an intense poetic beauty and conceptual complexity.

Callum Innes has emerged as one of the most significant abstract painters of his generation, achieving widespread recognition through major solo and group shows worldwide. He was awarded the Jerwood Prize for Painting in 2002, and the Nat West Prize in 1998. In 1995 Innes was shortlisted for the Turner Prize. Recent critically acclaimed museum exhibitions include From Memory, which traveled throughout Europe and Australia in 2008-9, Callum Innes: Recent Work at the National Galleries of Scotland, Edinburgh in 2010 and Callum Innes at the Whitworth Art Gallery in Manchester, England in 2013. Callum Innes: Materials and Process, at the Neues Museum in Nürnberg, Germany and Guerlain Donation at the Centre George Pompidou in Paris, France are both currently on view.