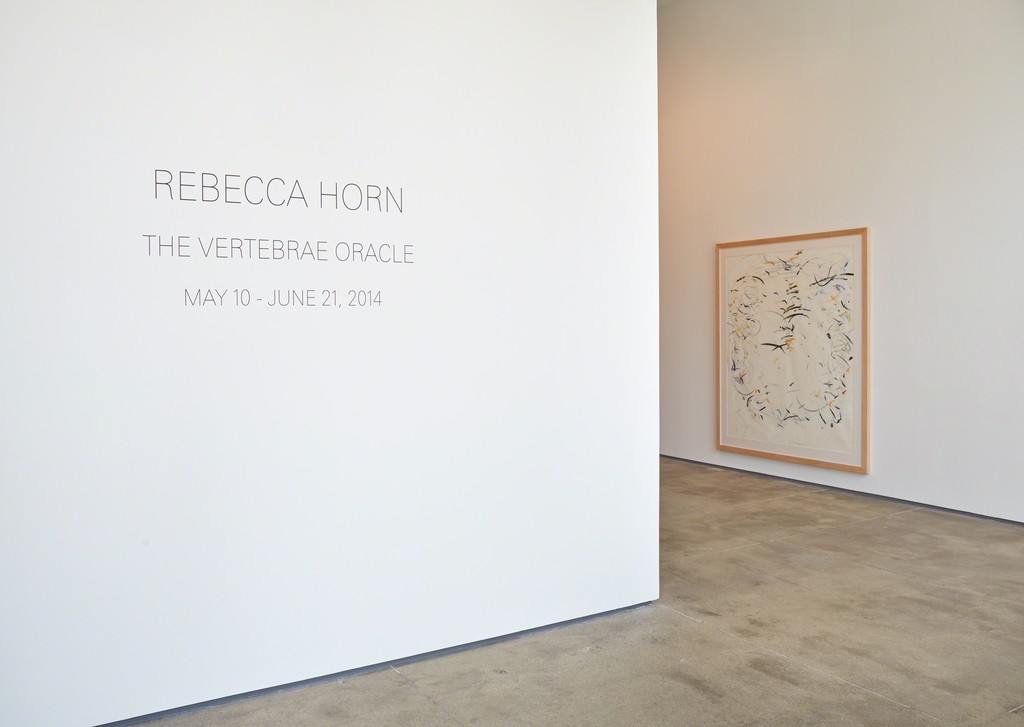 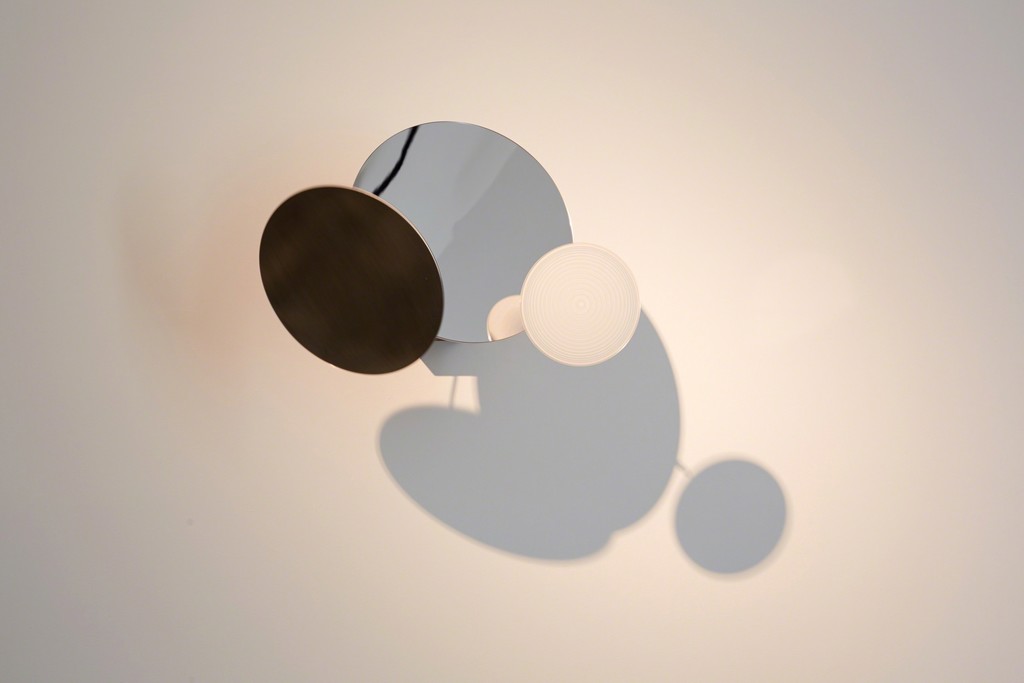 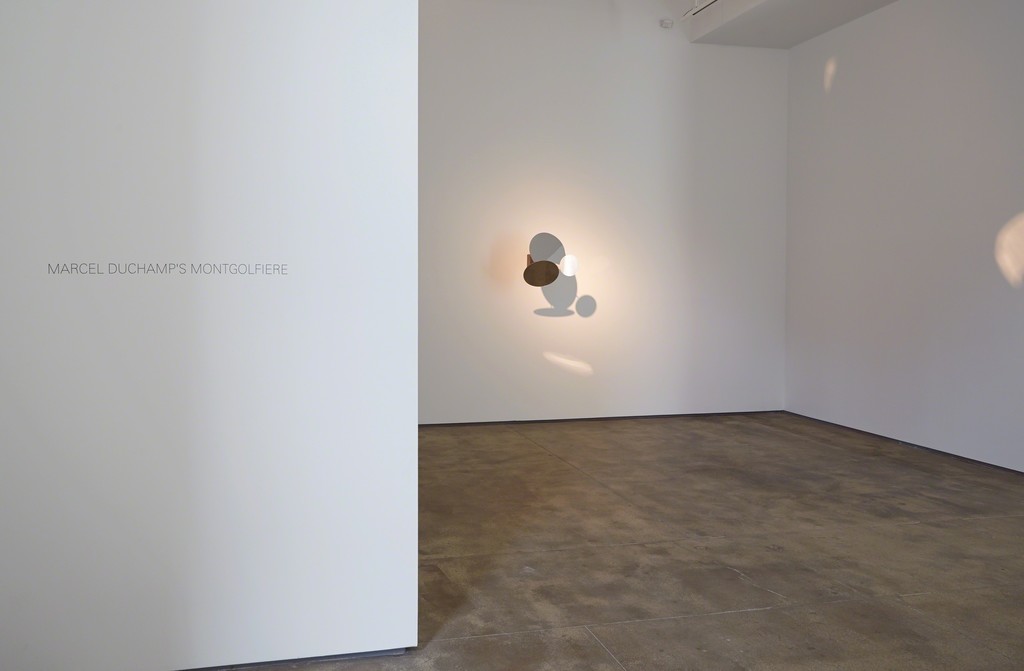 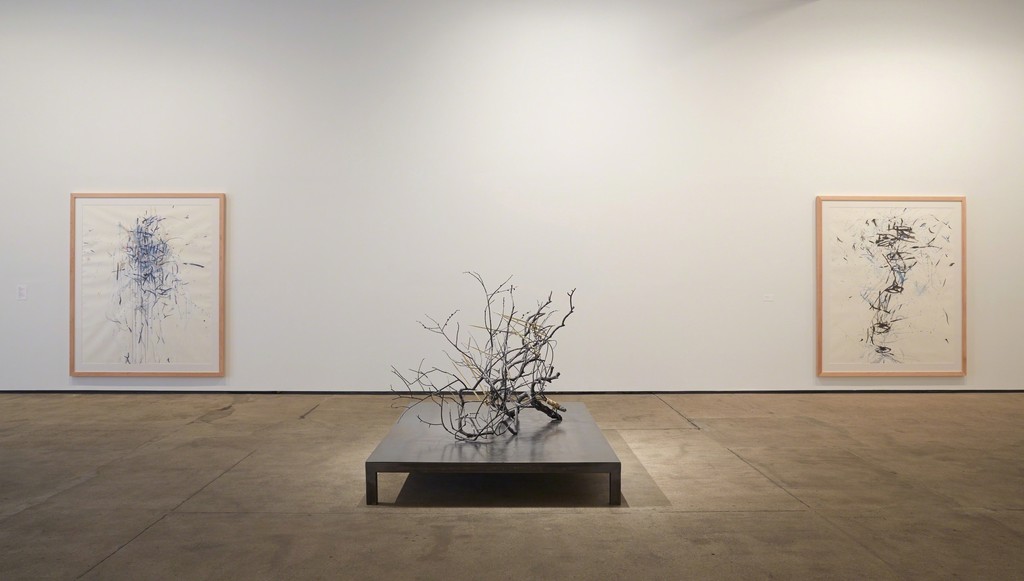 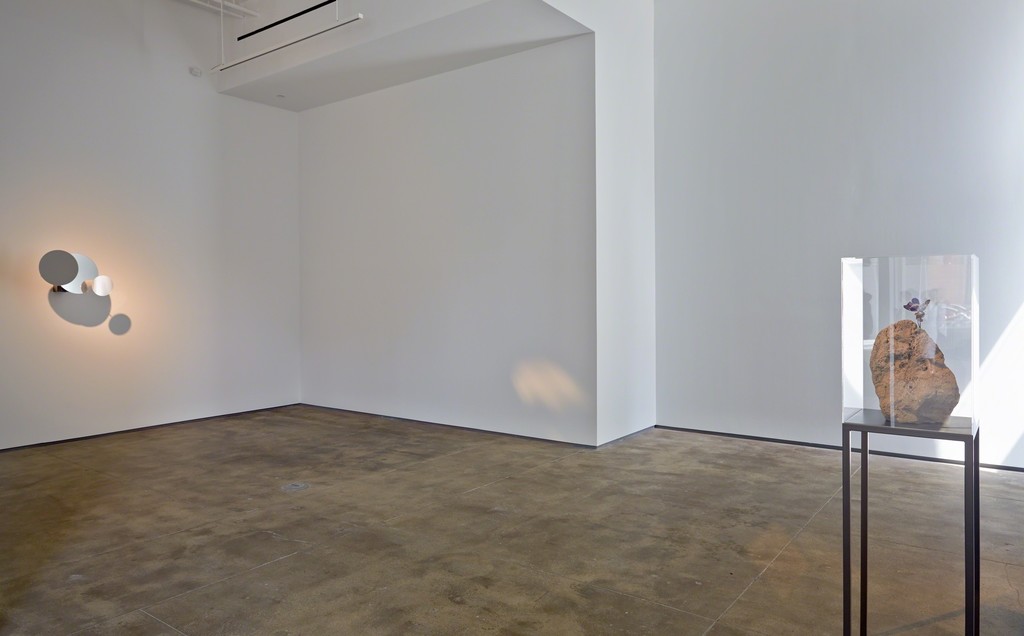 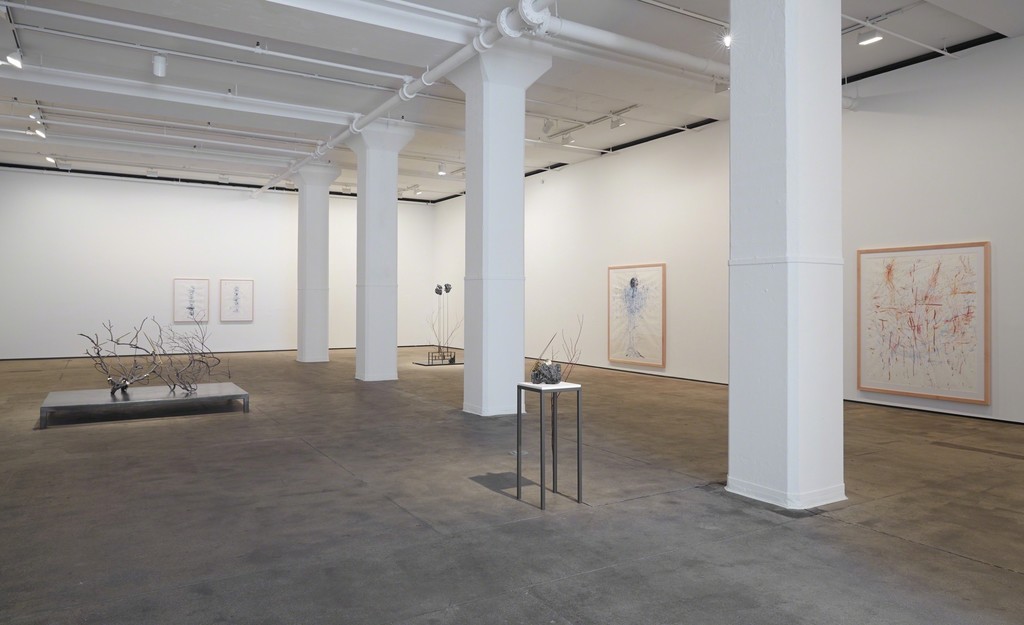 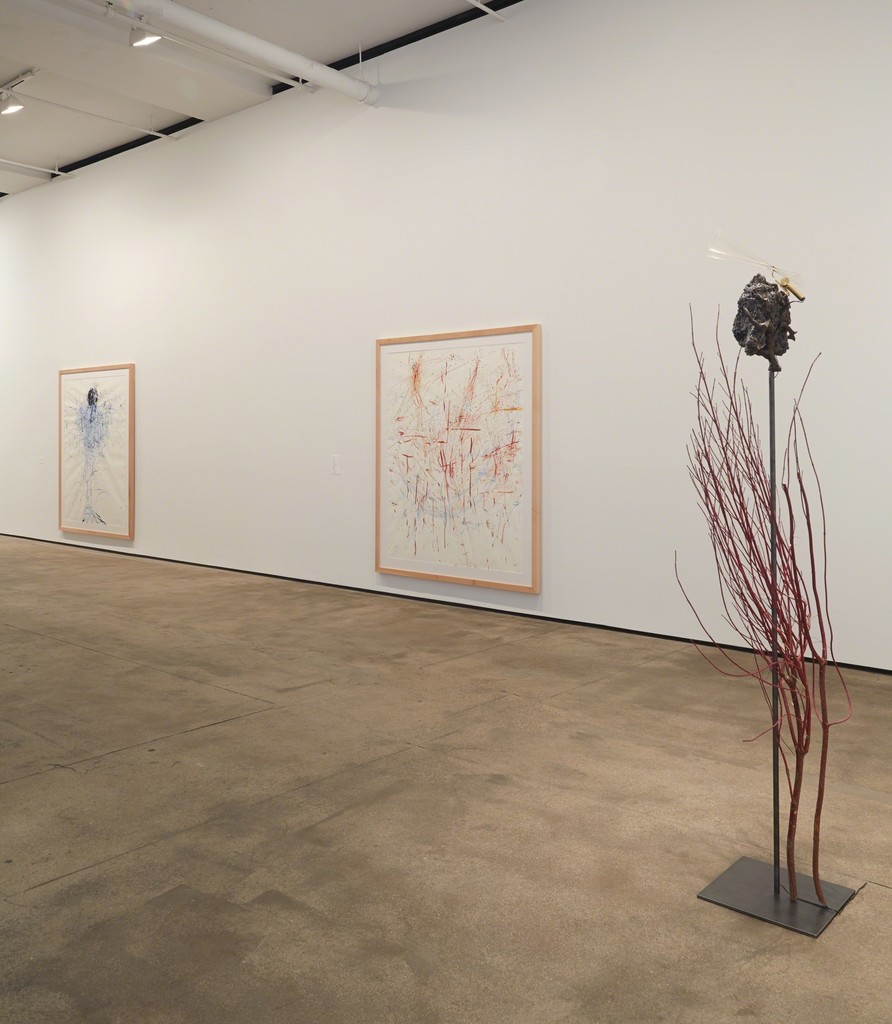 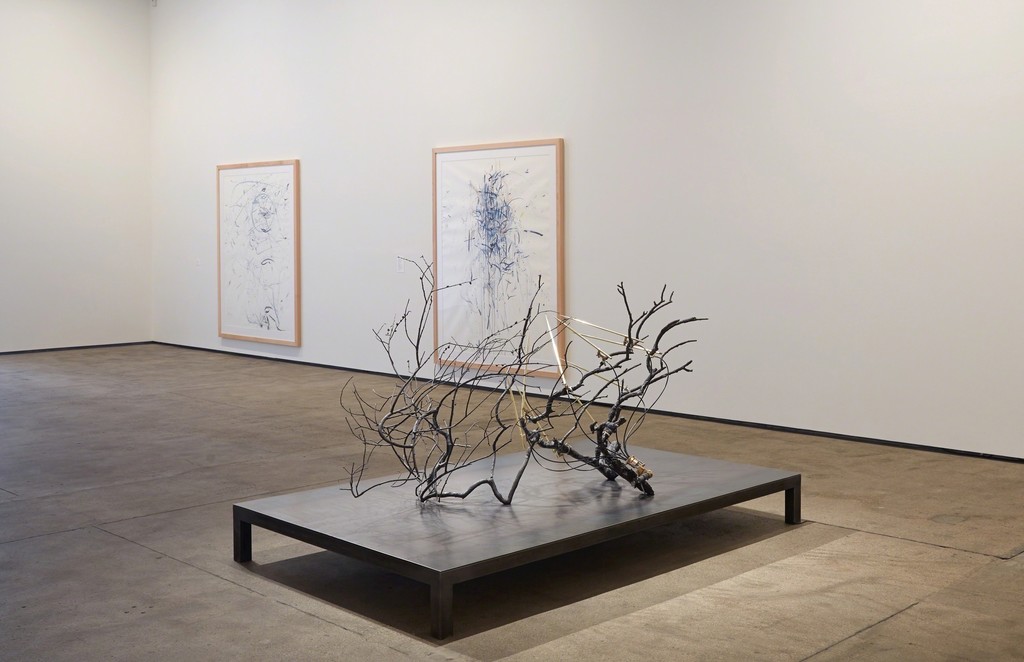 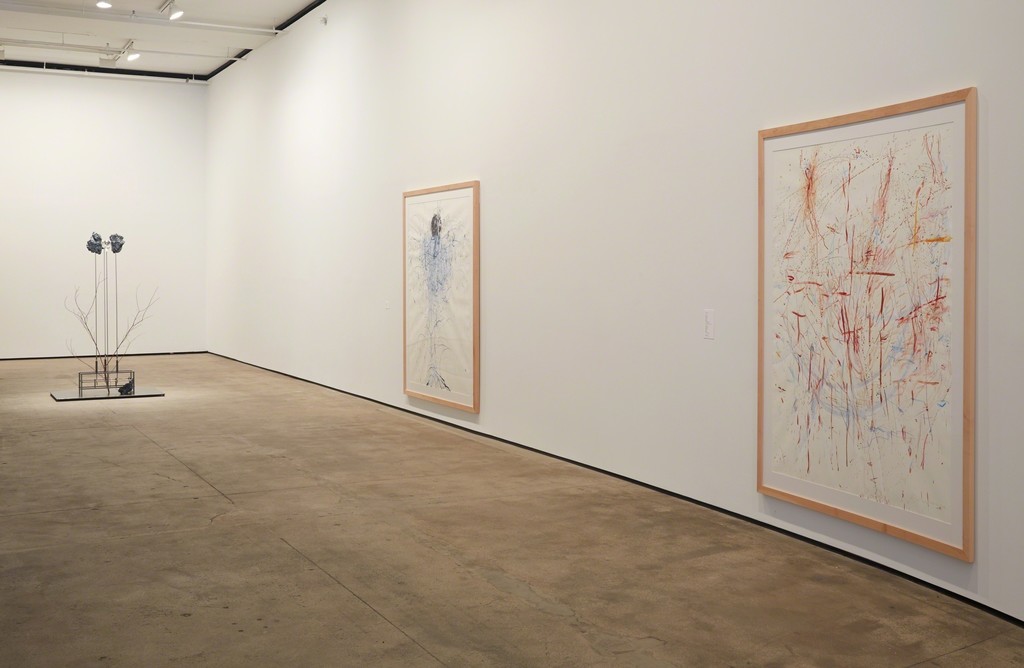 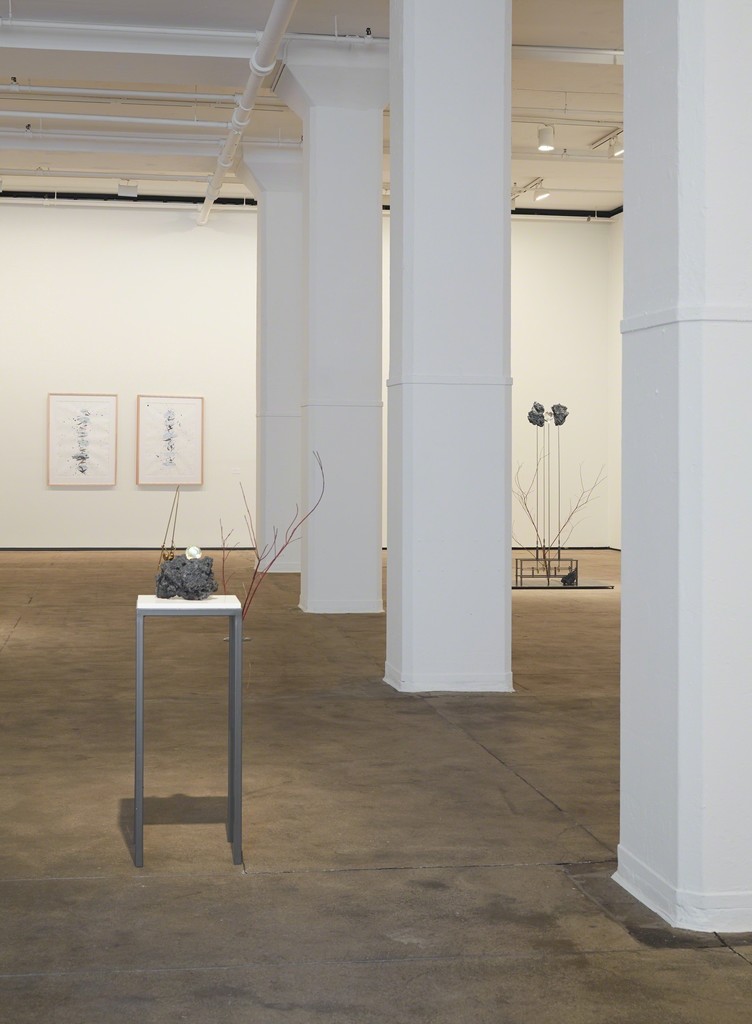 The Vertebrae Oracle will include a group of new sculptures and large-scale paintings on paper. As with much of Horn’s oeuvre, and particularly with the works in The Vertebrae Oracle, both nature and the passage of time are thematic constants. Revelation of a Tree, one of the largest sculptures in the exhibition, consists of a substantial cast bronze tree branch, on which brass claw-like rods are arranged in a circle. Their formation suggests that the claws both embrace and protect the tree branch. Horn’s references to nature and her lyrical mark making—gestural actions determined by the artist’s physical reach—are evident throughout the major paintings on paper in the exhibition, such as Moon to a Vertebrae Oracle.

The title of the exhibition is taken from a poem of the same name that Horn composed for her friend, Meret Oppenheim, in honor of what would have been Oppenheim’s 100th birthday in 2013. Horn explains that “Meret had this lightness, so that a poetic wind could open up the bones of her spine to leave behind messages in her world.”

The individual elements that comprise Horn’s creative output—poems, drawings, paintings, sculptures, and films—are all evinced in the exhibition. Science and alchemy, the rational and the intuitive, and the mechanical and the sensual have characterized her work over the last four decades, resulting in one of the most important and distinct oeuvres in the world.

Horn’s work is included in major public collections worldwide including: The Solomon R. Guggenheim Museum, New York; The Museum of Modern Art, New York; the Museum of Contemporary Art, Los Angeles, Castello di Rivoli Museum of Contemporary Art, Turin; the Tate Gallery, London; the San Francisco Museum of Modern Art, San Francisco; the Musée National d’Art Moderne, Centre Georges Pompidou, Paris; the Stedelijk Museum, Amsterdam; the Van AbbeMuseum, Eindhoven and many others. She has participated in Documenta and the Venice Biennale on a number of occasions; she has been the subject of a major retrospective at The Solomon R. Guggenheim Museum, New York and was awarded Japan’s prestigious 2010 Praemium Imperiale Prize in Sculpture and the Grande Médaille des Arts Plastiques 2011 from the Académie d’Architecture de Paris.