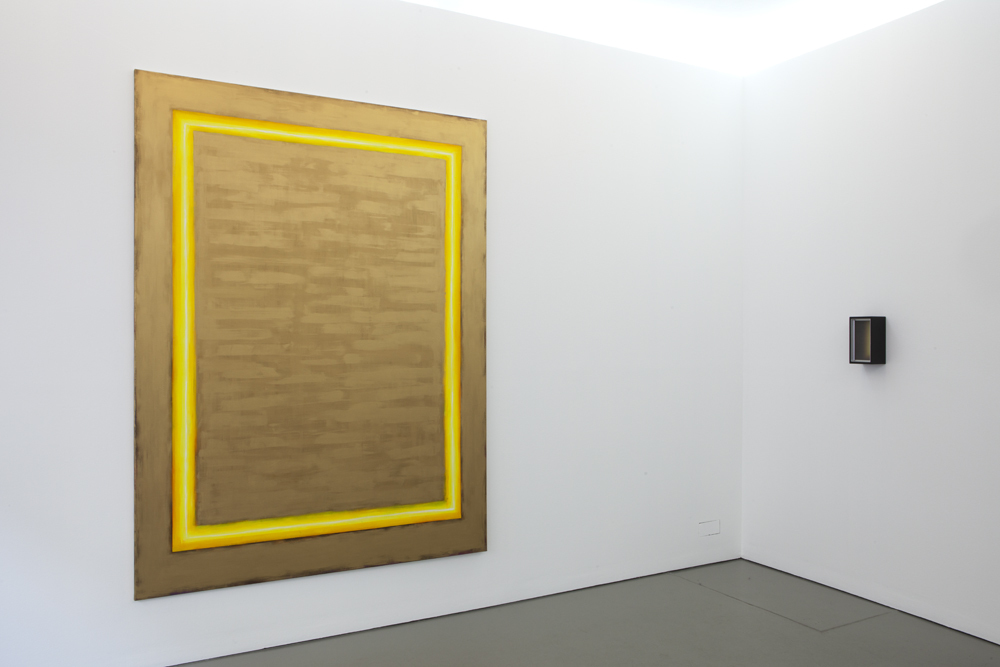 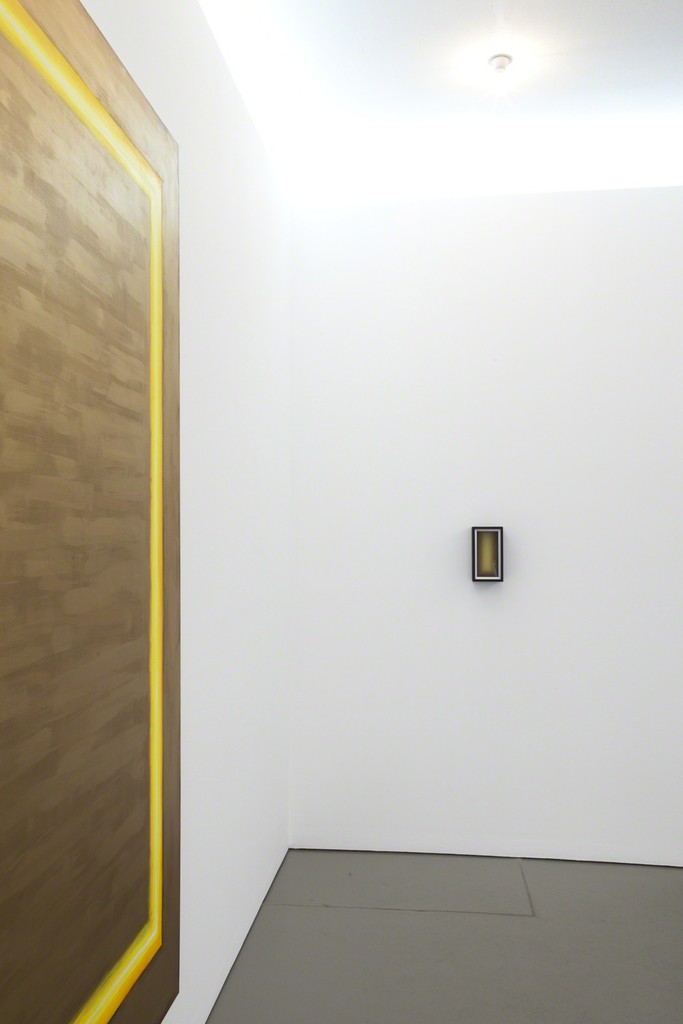 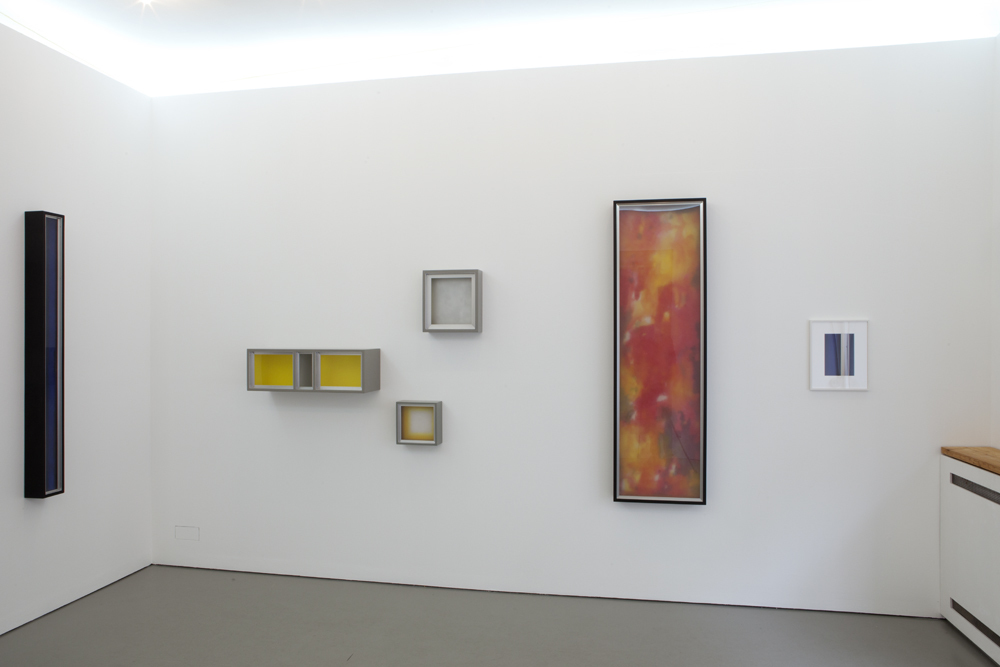 View into the exhibition towards the opposite side with serveral of Dittmar Krüger's 'Boxed Paintings'; photo: Lukas Heibges 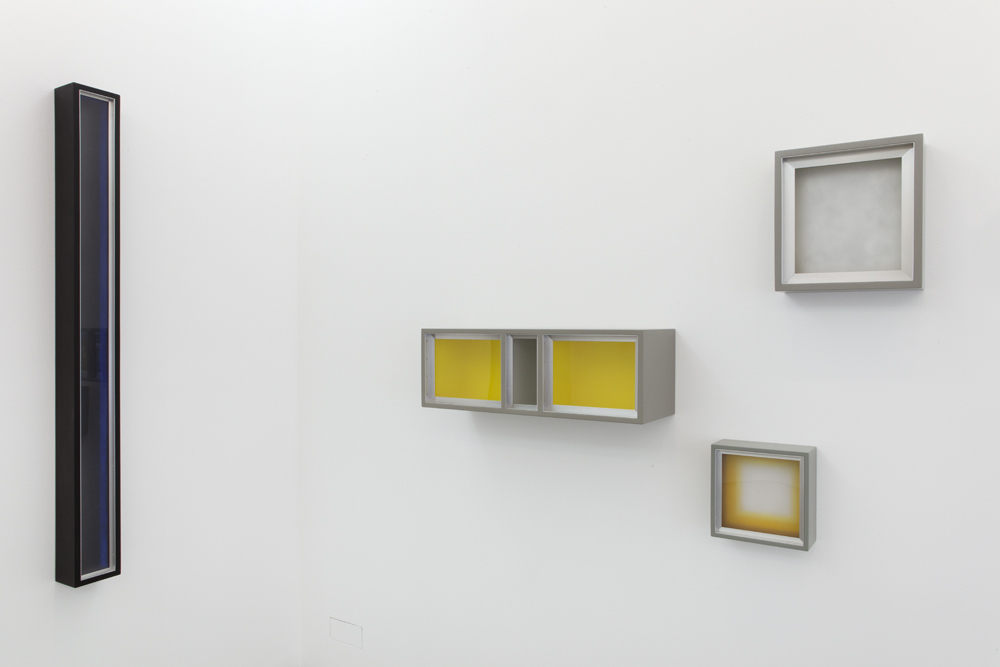 The title of the exhibition taken from the well known aria in Puccini’s Tosca – and the stars were shining – pre-empts, points towards and poetically transcribes what manifests itself as the essence of the artist’s work: Light. It remains the sole subject of Dittmar Krüger’s creative endeavour.

In his last solo-exhibition in 2012, the title was the concise, detached and somewhat obscure mathematical-physical formula 380 > 780 nm, the prosaic scientific way of expressing visible colour as light exactly in this area of the spectrum. Now, in 2015 it has suddenly become lyrical, the artist refers back to the area of the arts, music, which clearly addresses itself to feeling. What has happened?

From the point of view of reception Dittmar Krüger’s work is regarded as painting, which is relegated to a box, from which it radiates outwards. It is as if the artist would attempt to avert the momentary allure of the intensive or subtle play of colour by placing it in a protected place, in order to direct the vision towards the essence of colour, namely to its power of illumination and in doing so to protect it from dissipation. The perception of this approach, a hybrid between painting and object, as conceptually cool, does it an injustice. The concentration on the colour as painted matter is surely a reflection of our own mental state, but we let ourselves be distracted by, for example, the restrained and cool aluminium grey of the framed spatial enclosure, which separates the inner and the outer space and which provides the transition to the stage: to the colour experience. The colour experience, more precisely stated, the painted coloured surface in the box, has close connotations with our own emotional sensibility. All colours find a correlation in our psyche. In everyday language usage we speak of colour psychology. The reductive juxtaposing of colour in relation to one another seems however to have become (mis)understood and regarded as analytically cool and conceptual.

The present lyrical exhibition title may, in this way, well allude to the fact, that the basic premise and approach of the artist is emotional in its origin, or that he is at least aware of the dichotomy of intellect and emotion. Here his new found self awareness, with regard to the up until now overlooked antagonists, clearly postulates emotion.

Then if we view his new major work, that is now free from the construction of the framing object and has once again become pure painting on canvas, we experience a promise, in which the aria and the stars were shining can be conceived as a metaphor for a new vision of light.

The illuminatory nature of his new painting on canvas is extremely powerful. One could deem, that it is his colour/space/objects that have made this experience of shimmering colour possible in the first place. The concentrated power of the light, radiates outwards and by the same token breaks free from the newly laid down terrain of the canvas. E lucevan le stelle!