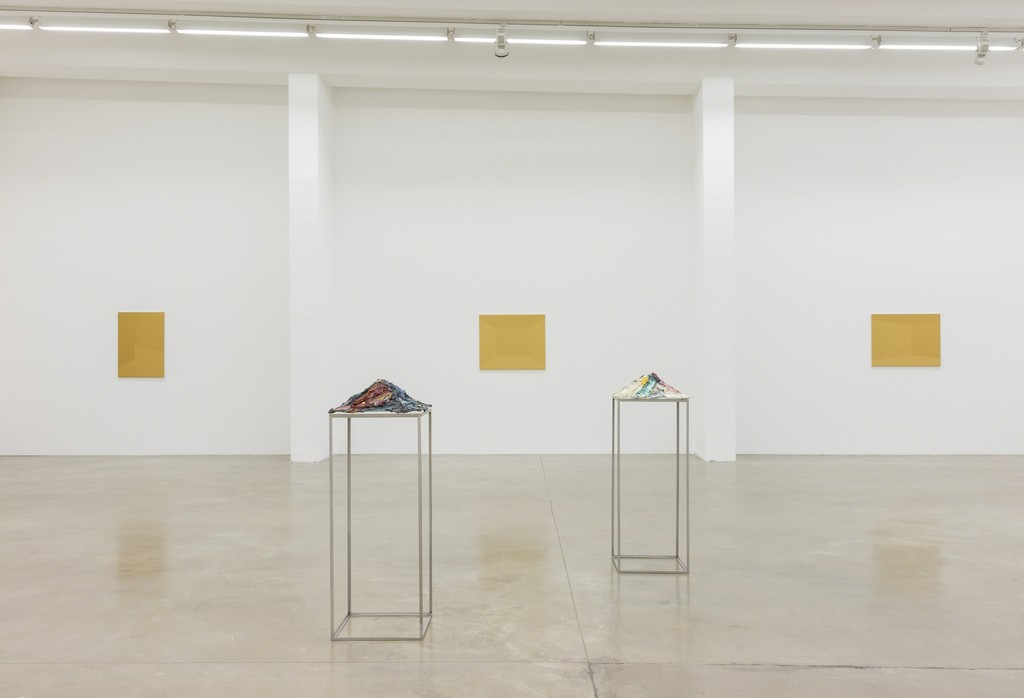 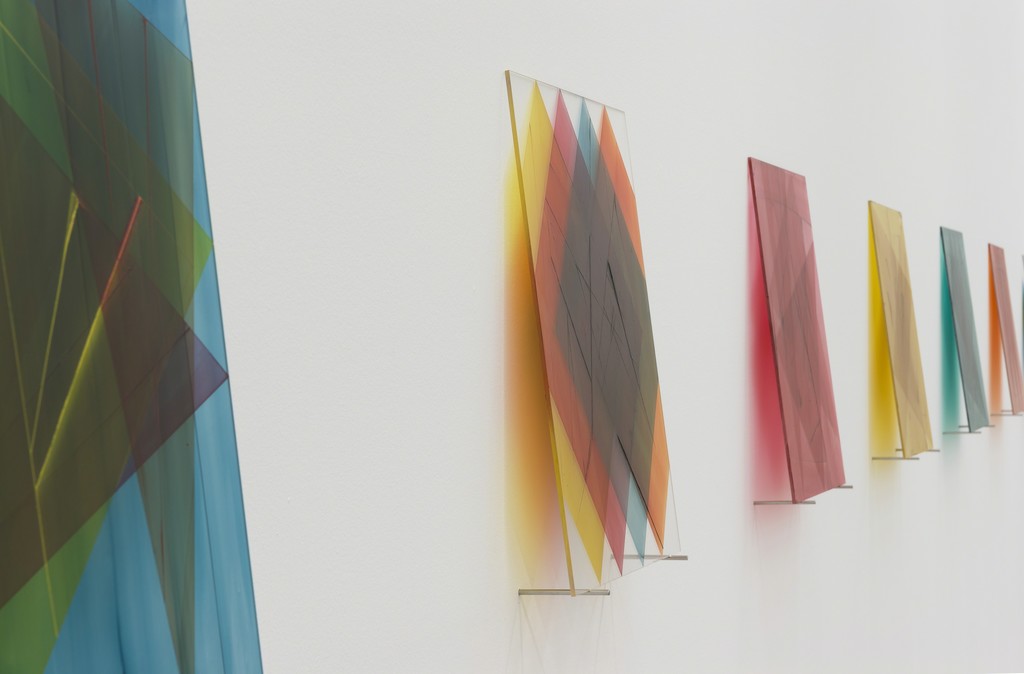 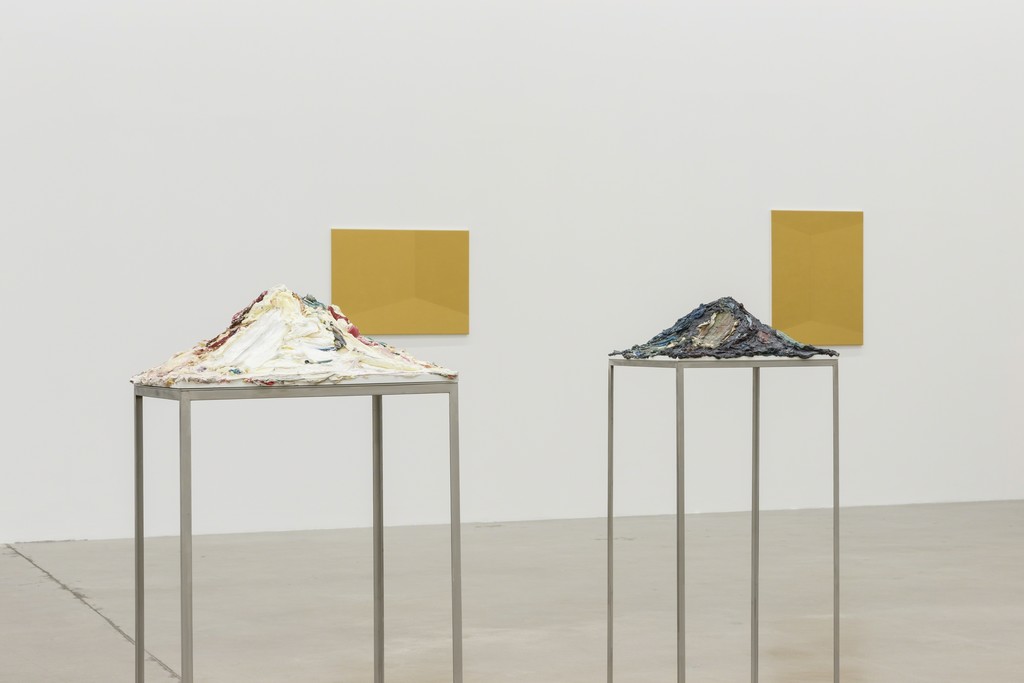 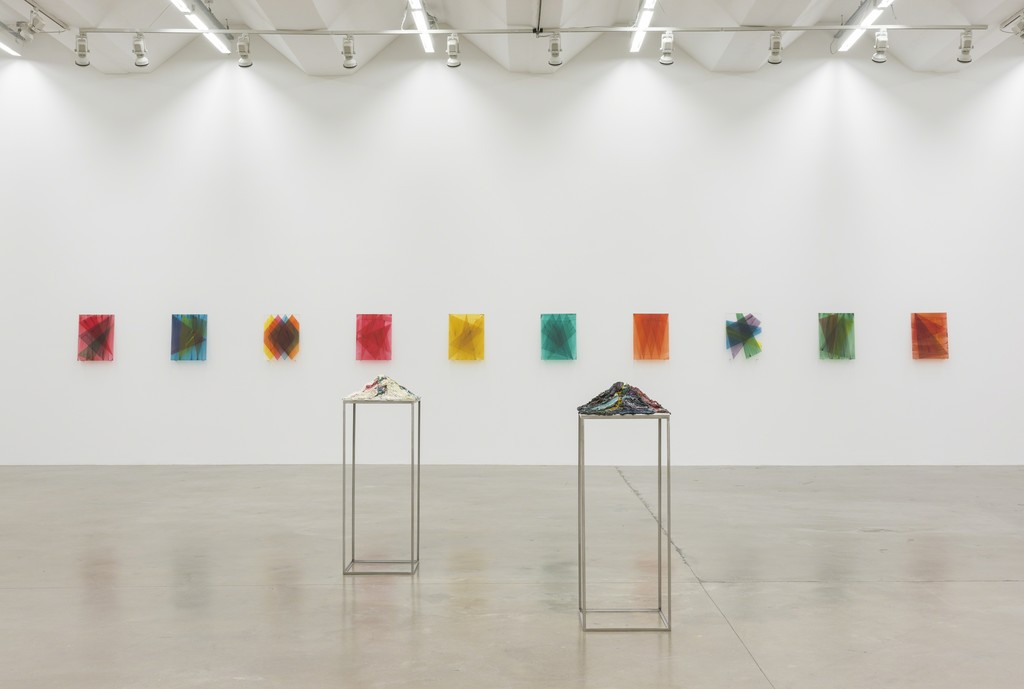 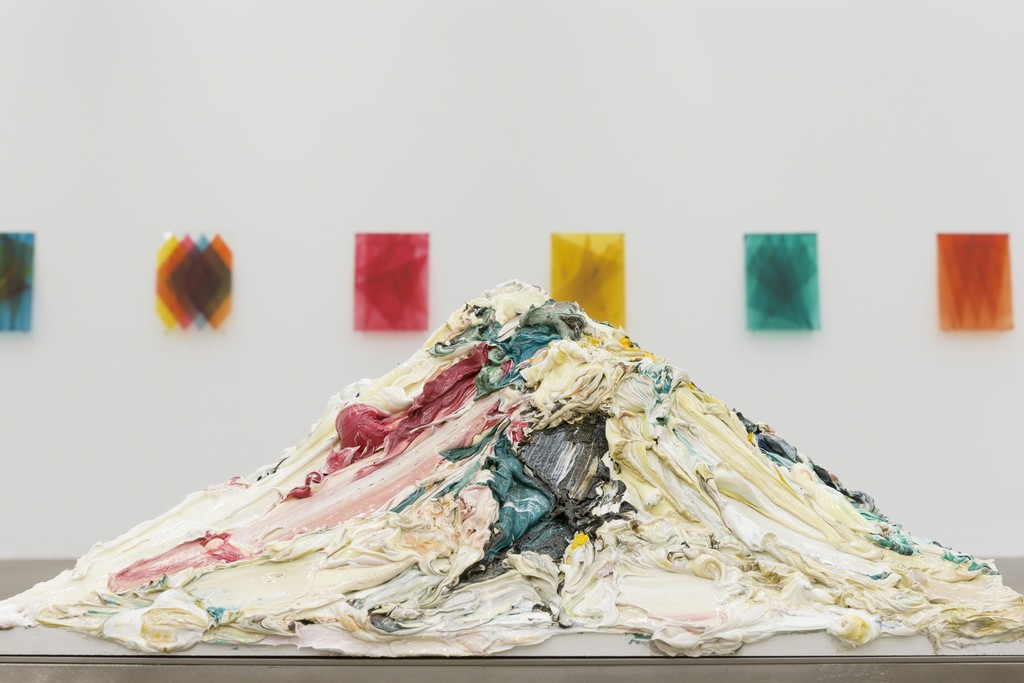 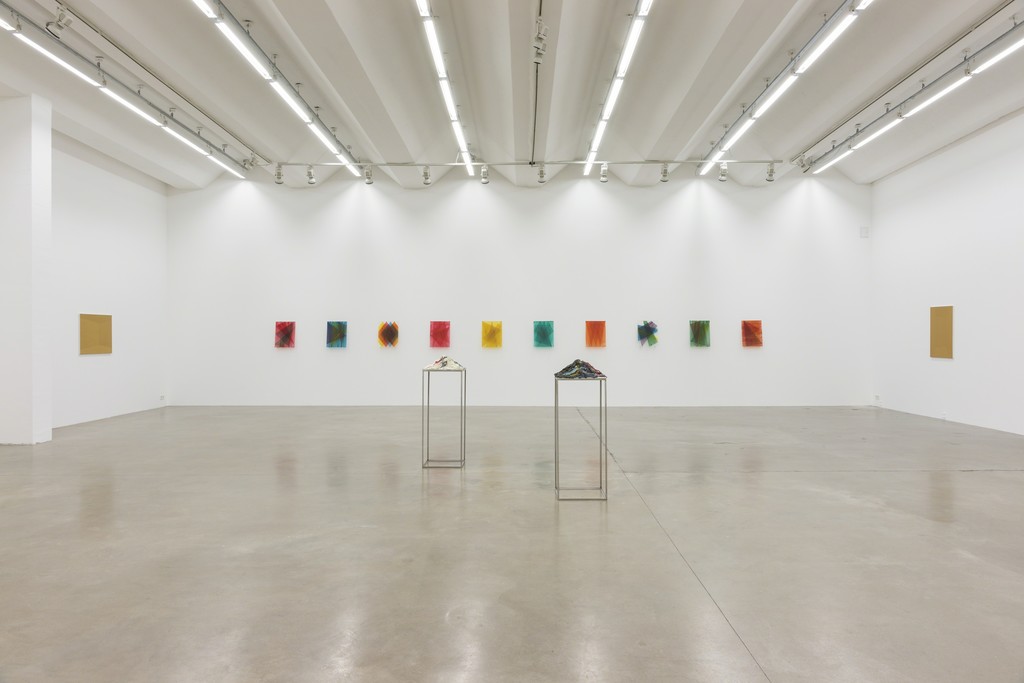 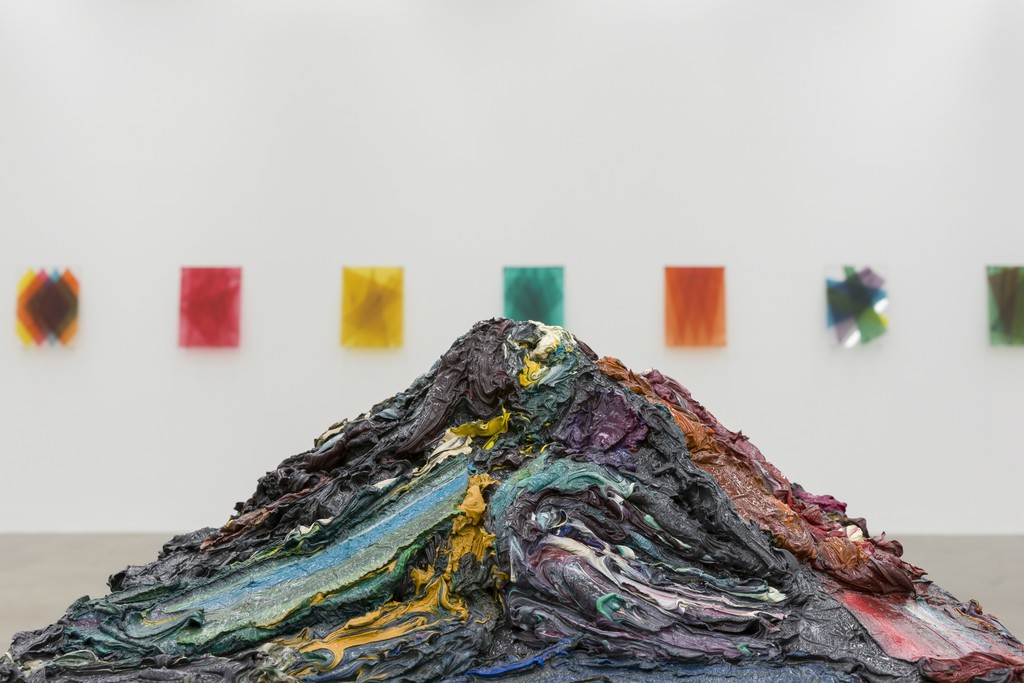 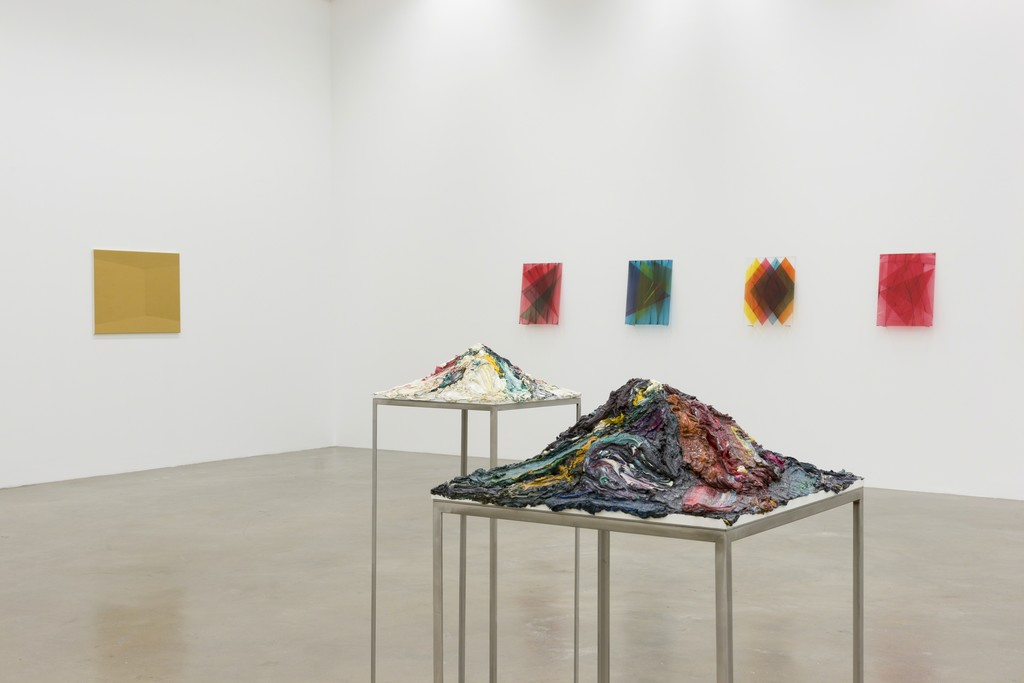 More than a decade ago, in 2002, Japanese painter Futo Akiyoshi began painting his empty studio. Neither did he
want to paint in an abstract nor in a figurative way. His studio was empty since he was going through a radical
change in his artistic work and was having a break from painting. Futo Akiyoshi did not want to paint things
anymore, but still he wanted to paint ‘something’. Consequently, he started painting the room that surrounded
him, the empty room; his studio. He wanted to paint this room as abstractly as possible, or referring to Plato: the
idea of a room. Or to Kant: the room in itself. Therefore, only a minimum of concrete characteristics should
adhere to it, and still the idea of a room was supposed to be sharp. Futo Akiyoshi settled on gold.
Gold is perceived less as a colour but more as an element and precious metal. Since time immemorial it is considered
to be a metal of the gods. Therefore, gold as a colour strongly approaches an idea. And this is what Futo
Akiyoshi wanted. The strong visualization of an idea. That is why no expression or brushstroke should be visible on
the paintings. Masterly and accurate Futo Akiyoshi draws the brush always in the same direction, from left to right.
That is how a very consistent, delicately grained surface develops. Among other things, the spatial effect emerges
by using a variable amount of layers of the golden oil paint for the different surfaces of the room -walls, floors,
ceilings.
With the focus of a Zen monk, Futo Akiyoshi has been painting his golden rooms – his series ‘room’ – for over 13 years now. Every painting oil on canvas. At first having his empty studio as a model, he soon did not need it
anymore. Now, he actually paints mere rooms in themselves. The process is elaborate. It takes him three
months to finish one painting. You could be inclined to think that he paints the same thing over and over again.
The reverse is true. Not only does every room differ from each other but also every painting looks different,
according to the standpoint from which it is viewed. The appearance of the painting is strongly dependent on
the incidence of light and reflections. Not without a reason the word gold etymologically derives from the
Indogermanic term for glance.
If you bring up the question about his artistic role models Futo Akiyoshi names Auguste Rodin – which at first seems
surprising. Rodin’s dealing with material impresses him. When it comes to painting, Futo Akiyoshi is mainly interested in the haptics and the material. At first, this is surprising, but it becomes obvious if you look at the
series ‘a certain aspect’ which he also started in 2002, shortly after finishing the first golden rooms. If you asked
Akiyoshi back then what he was painting in the series ‘a certain aspect’, he arguably replied: mountains. And
indeed, he paints high oil mountains of up to 20 cm that are put on a horizontal support – supposedly a socket.
Thus, he overcomes the limits between painting and sculpture. In this series he paints sculptures, spatial
objects, while in the series ‘room’ he remains twodimensional, however referring to space. And here as
well, Futo Akiyoshi strives for neither painting abstract nor figurative. Therefore, he shapes mountains with
paint, he does not figure them. And just like his series ‘room’ refers to a material, which is gold, he proceeds
similarly here, referring to rocks and thus geological matter, using oil paint.
The third group of works called ‘naked relations’ (since 2013) consists of transparent images on acrylic sheets
which stand on steel pins that are mounted in the walls. The images are constituted of four layers of several transparent oil colours. The first layer covers the support. On this layer Futo Akiyoshi paints three overlapping
triangular shapes or squares. The image remains transparent and in this way it reveals its construction concept. Moreover, something spiritual is inherent in the paintings just like in the golden rooms. They partake of something anti-physical. Here, too, Futo Akiyoshi explores the material’s limits.
While the transparent paintings have a constructivist vocabulary the golden rooms are rather coined minimalistic and the colour mountains display a pastose crossing of the border. What they all have in common is their intellectual content. Futo Akiyoshi says of himself that he lays down strict rules which he follows at first. However, implementing this self-committing programme causes him the highest joy. This joy is what you can see in his works. Thus, in Futo Akiyoshi’s art, the conceptionally intellectual conglomerates with sensual compassion. Almost as with a laughing Buddha.