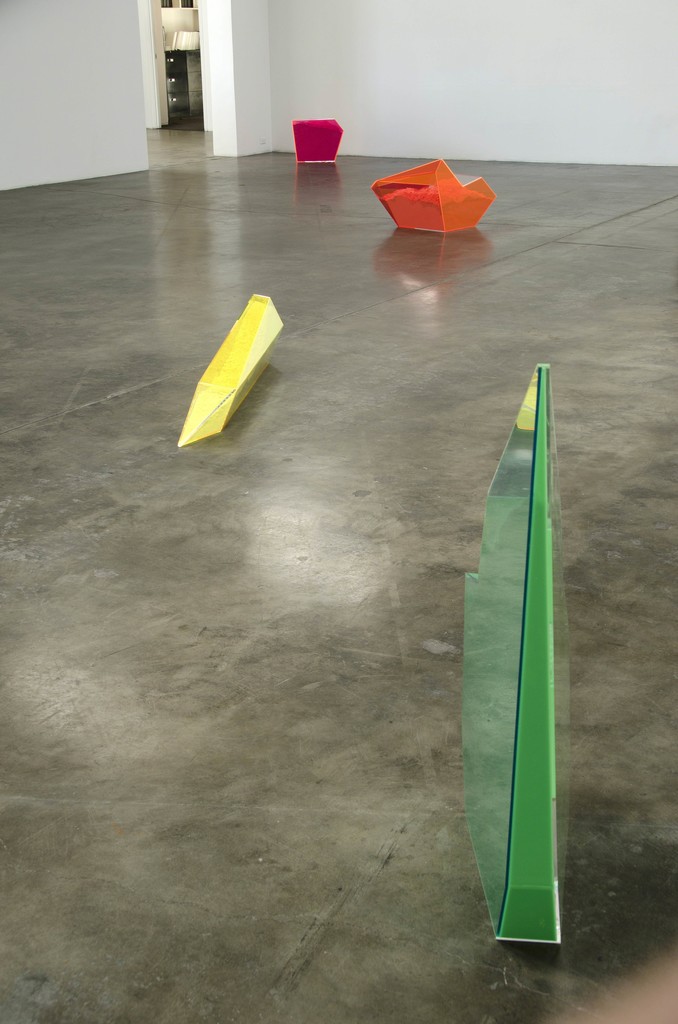 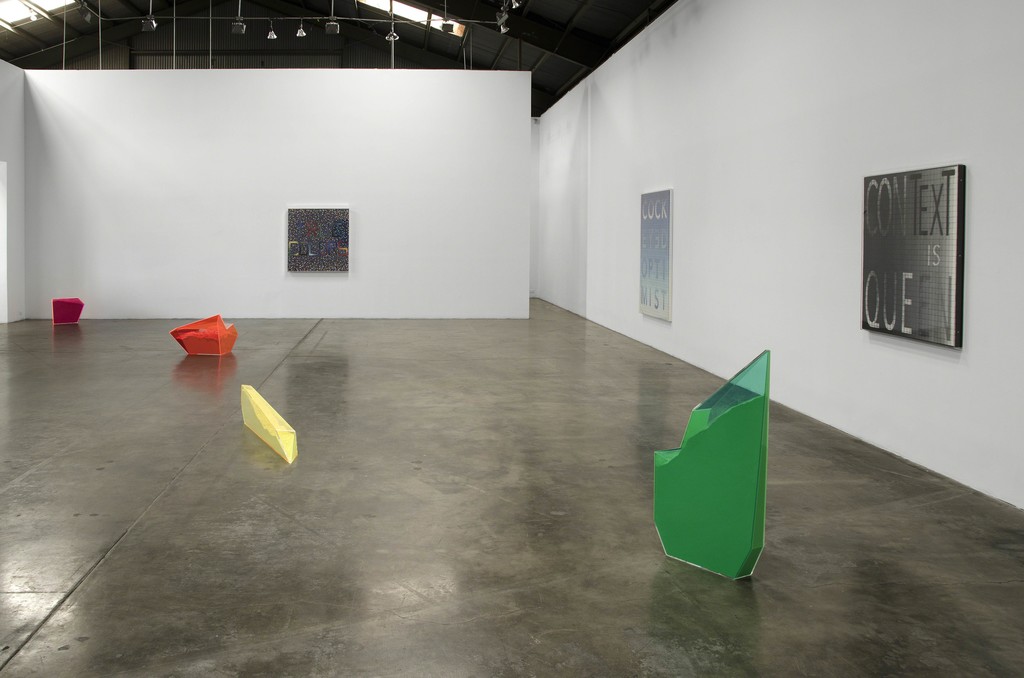 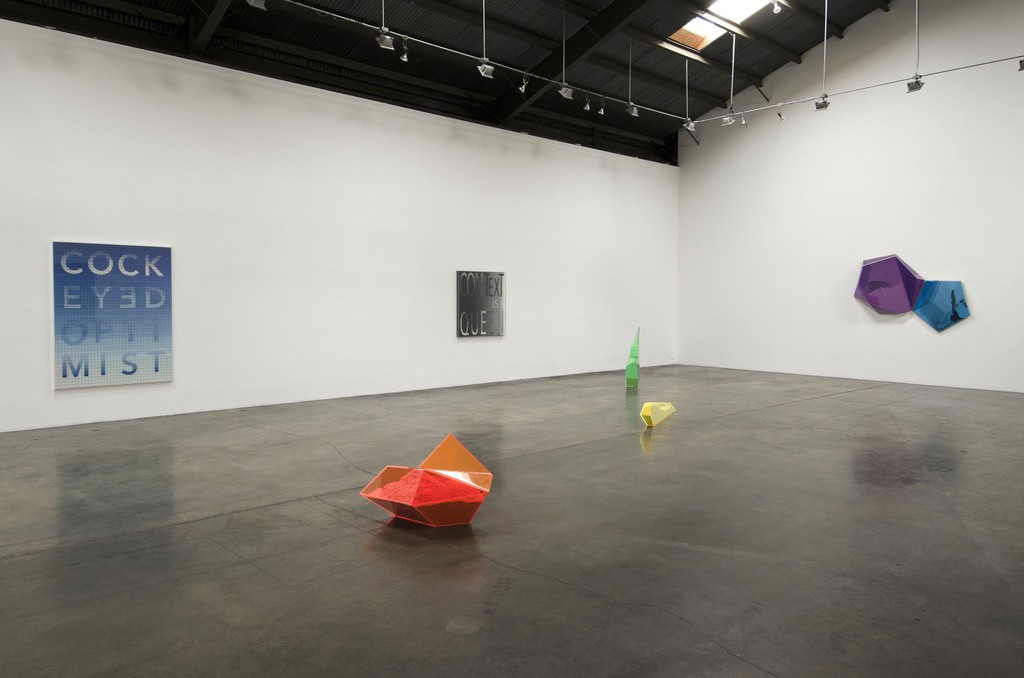 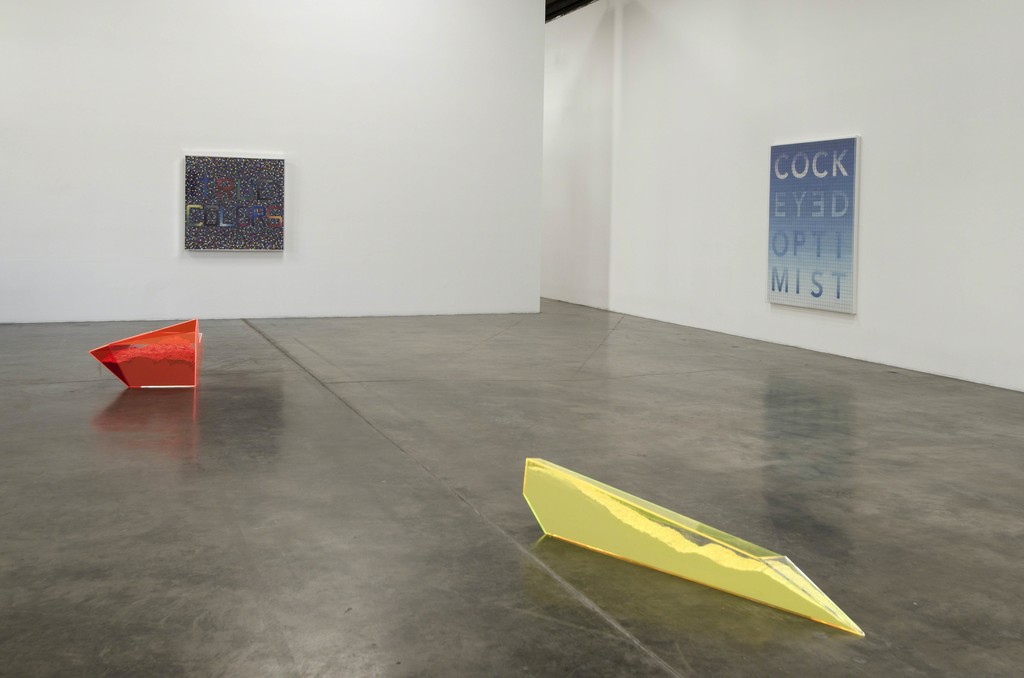 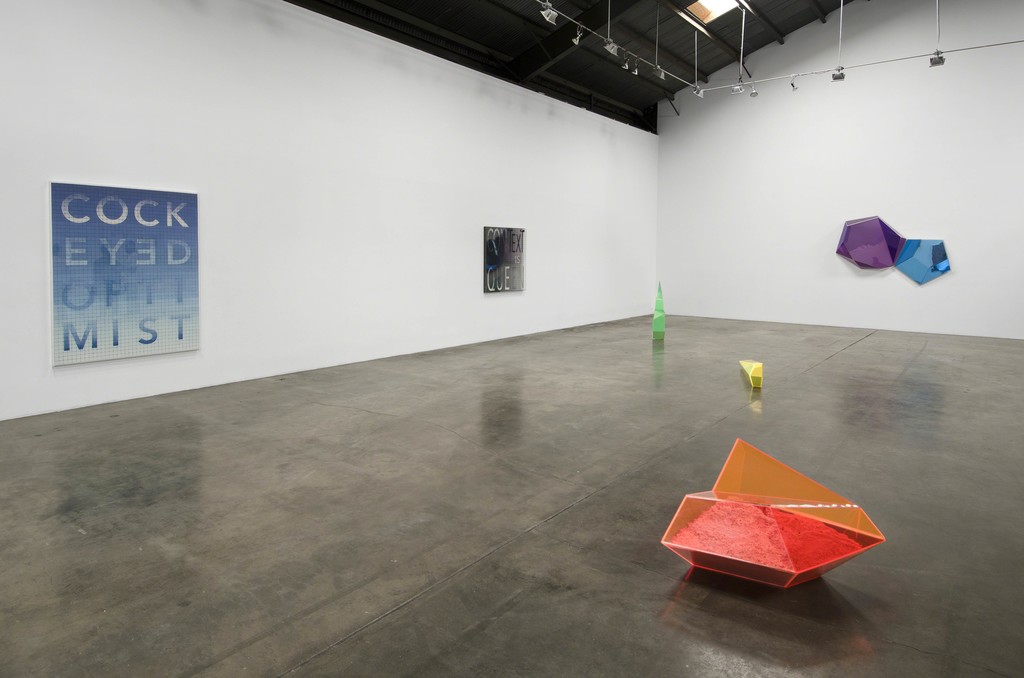 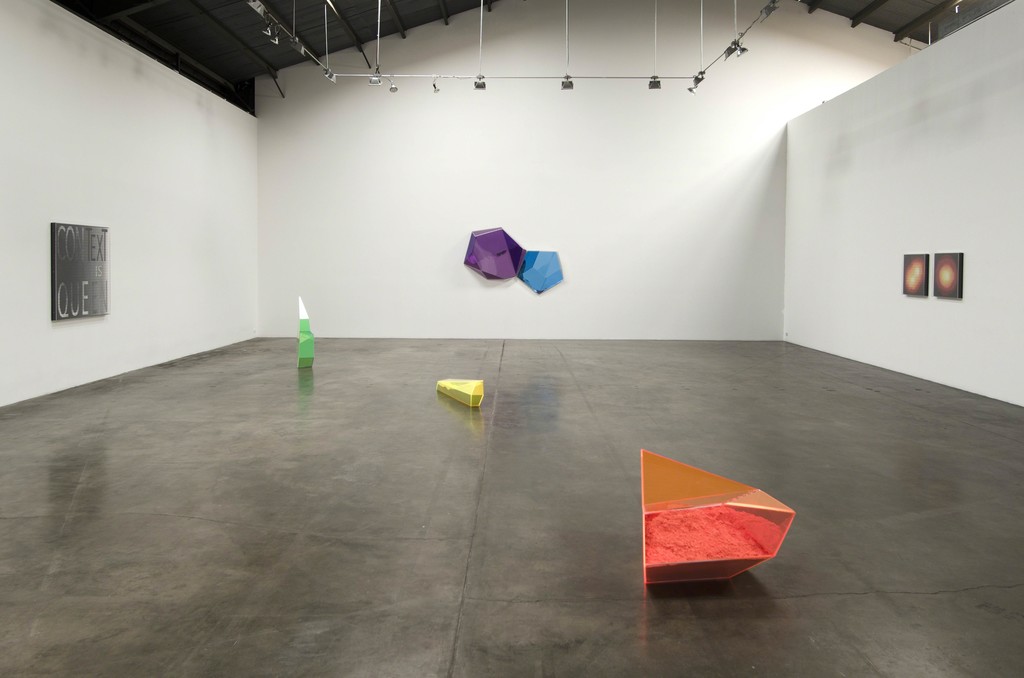 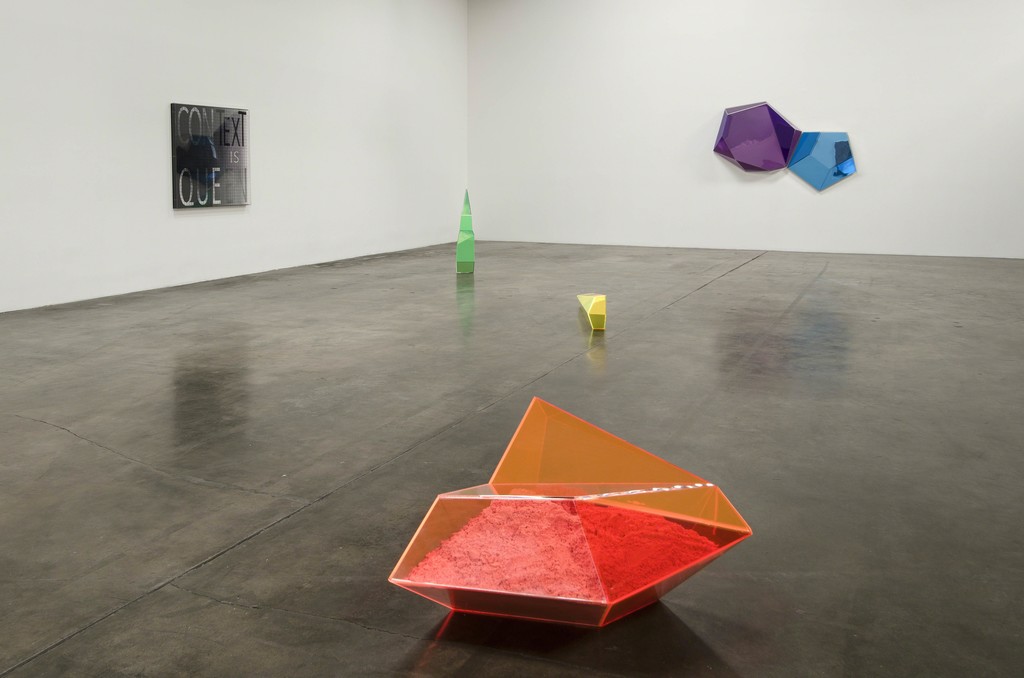 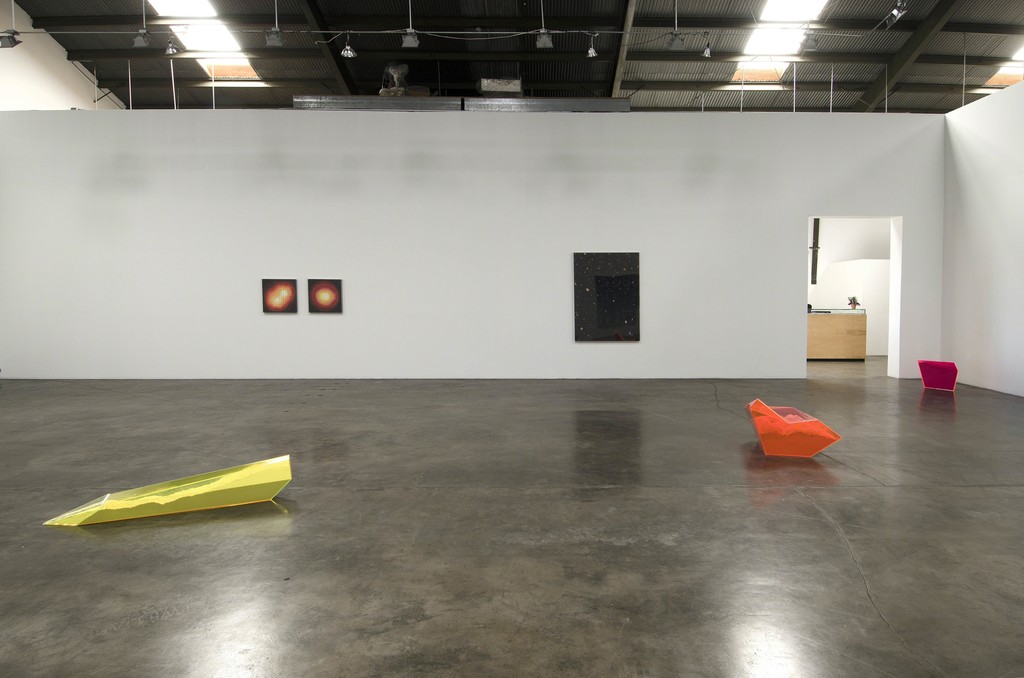 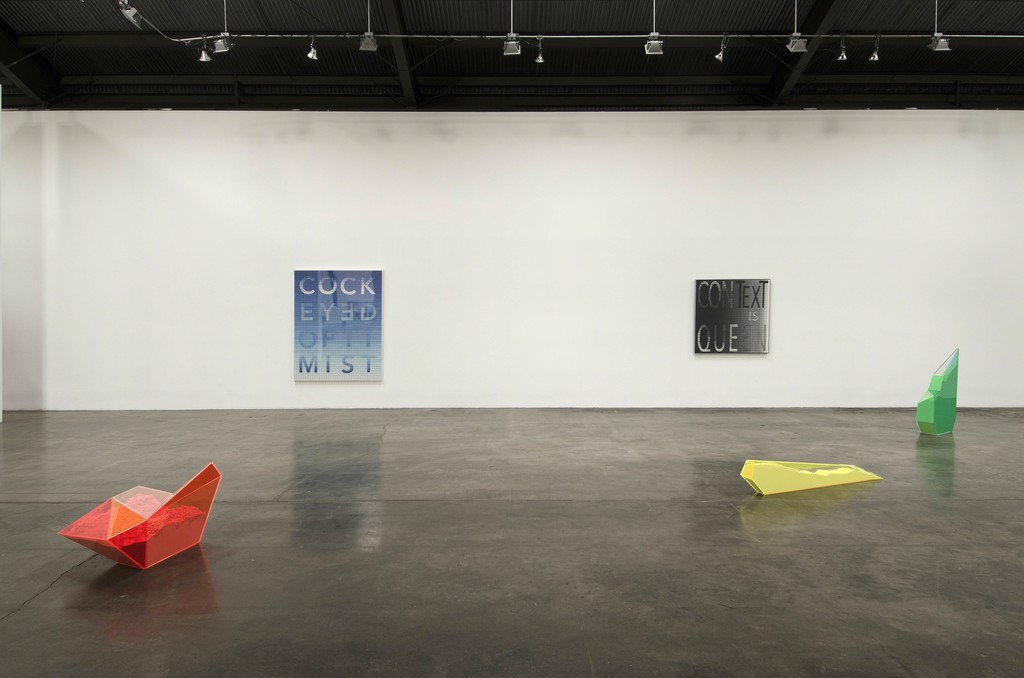 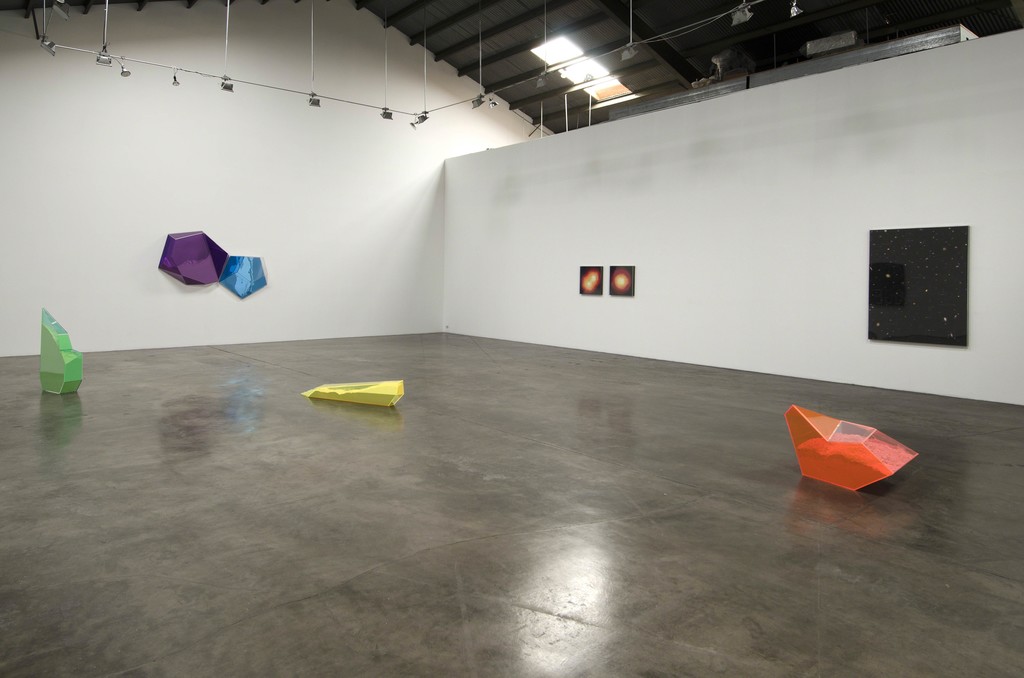 This exhibition takes the artist’s explorations of femininity and gender and expands the dialogue to encompass ideas related to the current state of human evolution and notions of progress in contemporary society, often via the lens of science.

Serving as an extension of her last show, Lachowicz continues to create works using cosmetic compounds. Her visual vocabulary has developed from referencing specific artists and artworks to playing with language via text and depicting scientific images relating to physics and the cosmos.

In the eyeshadow works entitled “CONQUE” and “Cockeyed”, words are broken up so that multiple meanings can be understood simultaneously. CONQUE could be the vim plug-in for computer programming, or a conjunction in the Spanish language. It is also the first three letters of two larger words in the sentence Context is Queen. The song Cockeyed Optimist comes from the musical, South Pacific, which at the time was considered progressive on racial issues but in hindsight appears both racist and sexist.

Along with the text pieces are images of stars on the macro scale and quantum dots on the ultra micro scale. Quantum theory proffers the notion of being in multiple places simultaneously, thus eliminating the necessity of one singular truth or position, while looking to the cosmos provides a sense of infinity. In “Cosmos”, Lachowicz inscribes a three dimensional thesaurus diagram of the word “evolve” onto an eyeshadow rendition of space (reminiscent of recent Hubble telescope imagery.) The Ancient Greeks imposed a world view onto the cosmos through constellations, which continue to be referenced and used. Lachowicz is suggesting a redefinition of societal values: less patriarchal, more positive and appropriate to contemporary society.

The subject of the composition of cosmetics comes under closer inspection as well in this exhibition. Natural pigment has been all but replaced in consumer society by synthetic ones, which has allowed a greater articulation of color beyond what we find in nature.

Brightly colored plexiglass sculptures housing massive amounts of pigment are placed throughout the exhibition. The plexiglass shapes are reminiscent of the structures seen when inspecting pigment particles under an electron microscope. Throughout the show is a theme of juxtaposing the very small with the very large, seamlessly moving in and out of micro and macro-cosm. Contained and container are collapsed, thus altering our perspective on size and scale in the universe.

Rachel Lachowicz lives and works in Santa Monica, and is an Assistant Professor of sculpture & installation in the art department at Claremont Graduate University.